ValeGuard is a mix of city builder, tower defence, and RTS combat. It has some nice ideas, but ultimately falls a bit flat.

“Something dark stirs in the wilderness and the quiet hamlets of the Vale stand defenseless…
A lone Valeguard hurries to a nearby village. With hope, there is still time to fortify.”

That’s about it as far as background story goes, though each village comes with a few new paragraphs. For some reason, anyway, the undead, demons, and greenskins have all chosen now to descend upon the Vale in waves of destruction, and it’s your job to fend them off — well, to make sure your inn doesn’t get destroyed, because we all know how important it is to have somewhere to lay your head after a few tankards of ale. Right?

ValeGuard is quite pretty, but looks a lot like a mobile game. The world is a blend of blocky 3D tiles for landscape and cartoon-like scenery and characters. The cartoon look extends to relative sizes, with characters being stupidly large compared to the buildings, and the ubiquitous butterflies being similarly huge compared to the people. It’s colourful during the day and, well, darker at night. There are a few nice effects, too, but enemies and characters are relatively simply modelled and textured, with wooden animations. 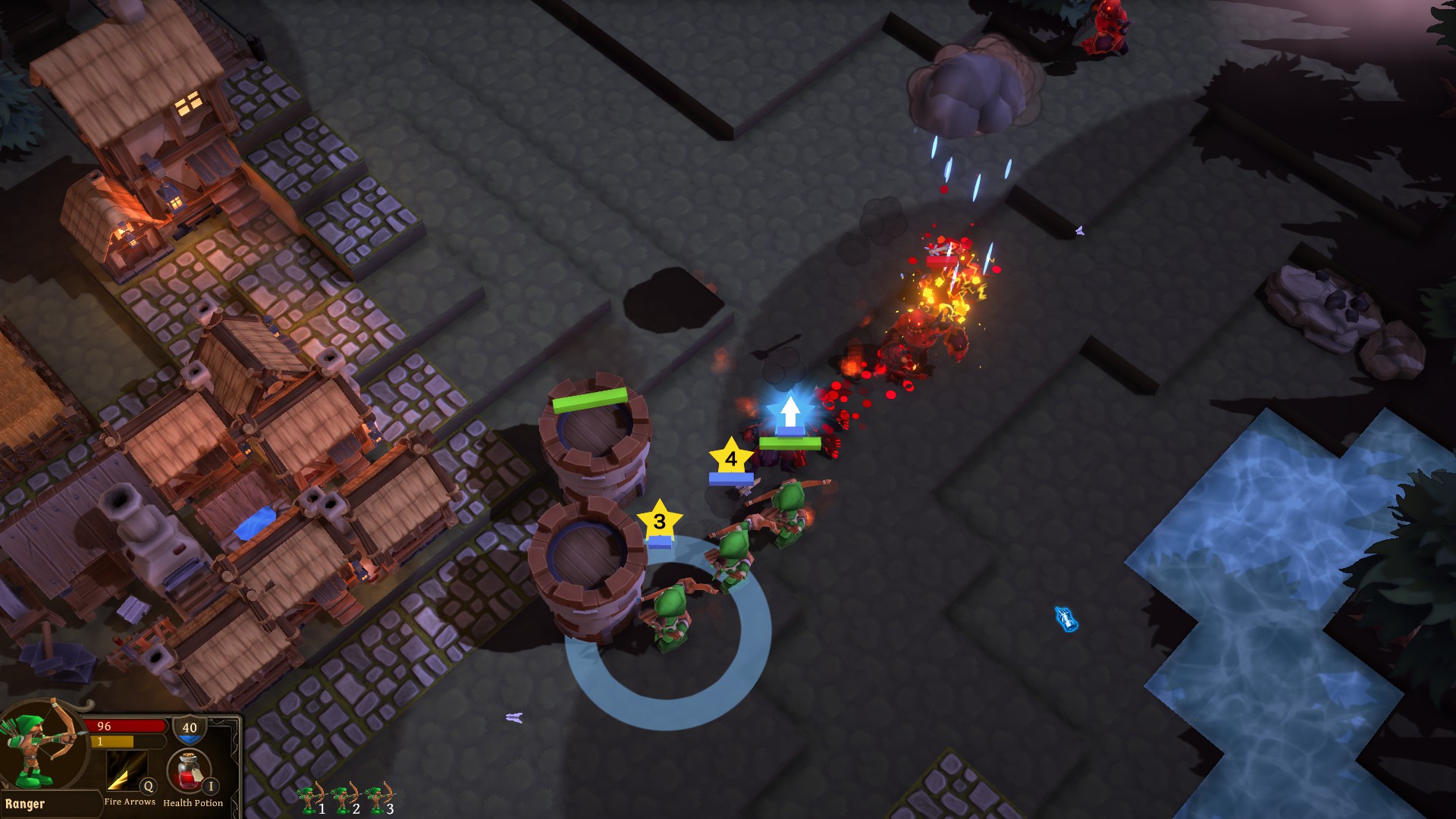 While the game appears to be rendered in full 3D, it only allows very limited control of the camera: zoom in and out and pan once zoomed, within the very small play area of each level. There’s no free movement or rotation, and you can’t pan off the edge of the map at all, making targeting of enemies difficult. The whole game feels rather claustrophobic.

The UI is very simple, though a little unintuitive. Buttons seem haphazardly placed around the edges, some requiring a single click and others opening up very sparsely populated sub windows, which can only be closed by clicking the same button again. It just doesn’t quite seem right. The inability to click and hold on buttons during trades is a killer, too; clicking 73 times to sell all my spears in the last level really sucked.

Probably the worst thing about it, though, is that on many maps enemies come from the bottom left — exactly where an information panel and ability selection buttons appear — making combat more fiddly and painful than it should be. Hmmm, come to think of it, the ability for everything to move through everything else may be worse; units can walk or stand on each other or buildings or enemies, making unit selection and direction in combat even more fiddly. 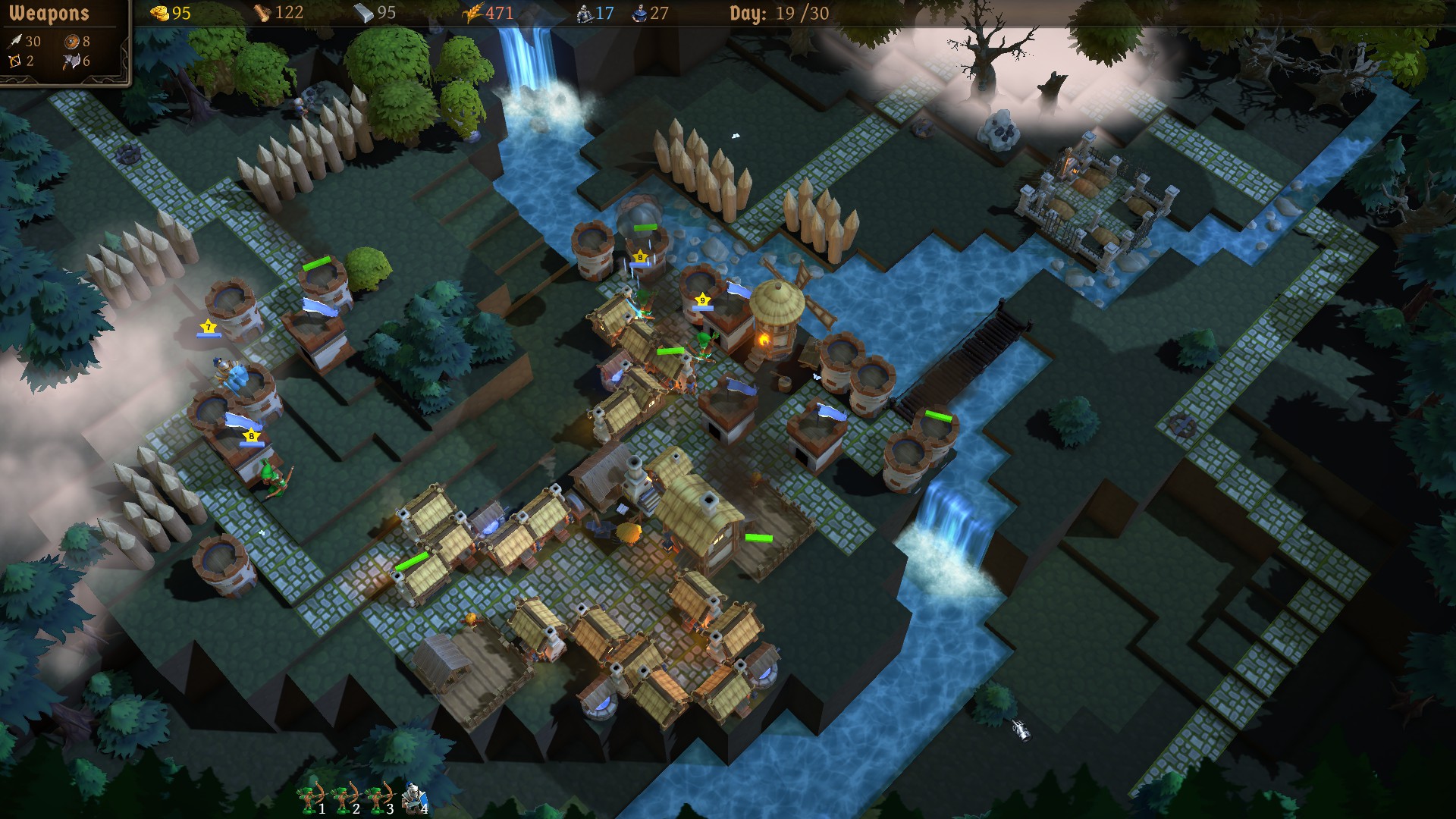 Performance is good, with no noticeable slow down even with a fairly large number of units in combat. The Unity launcher offers the standard choice of graphical detail adjustment, as well as resolution and a full screen / windowed toggle. 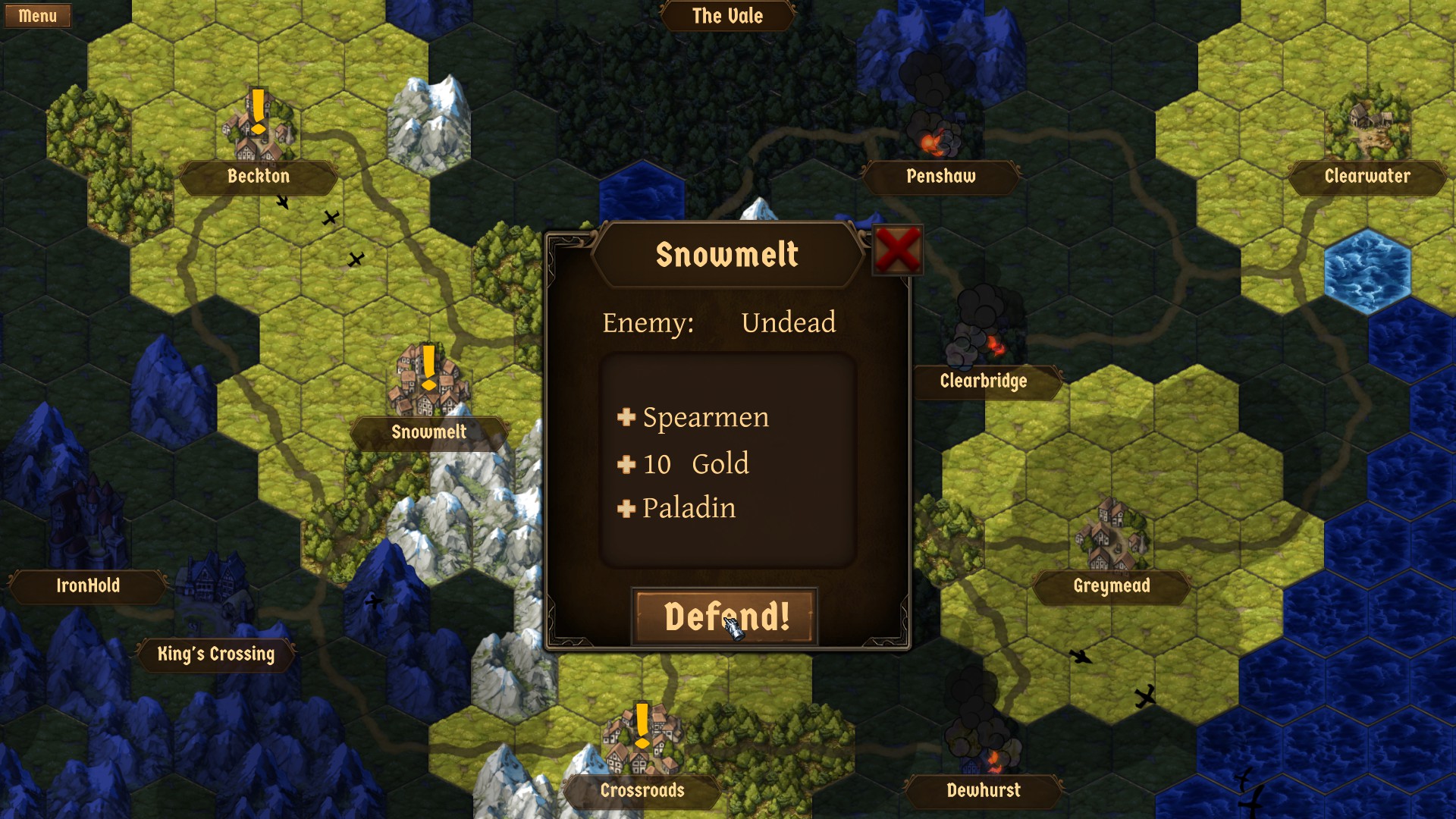 ValeGuard is a sort of simplistic city builder with RTS-style combat, though it’s fair to say it touches a number of related genres. The game offers only a campaign mode, comprising six missions. Each mission involves a certain number of turns you have to survive, or in which you have to complete a building objective. Each day/turn is completed when you assign work to your available workers — harvesting materials, building, crafting, or farming — and night falls. During the night your village is affected by one or more of a small assortment of random events, most of which can have good or bad effects, including an attack.

Village building is sadly limited, with few options available: houses and wells to increase population, farms for food, stables for horses, and some defensive structures that are only available on certain levels. The basic gameplay involves gradually increasing your village population and trading off material harvesting against production in order to improve your defences while still allowing for population growth and farming. It’s a reasonable balancing act, but it’s just not deep enough. You can also hire troops with crafted resources and gold. These then become controllable in the night-time combat sections, alongside the heroes you acquire as you progress. 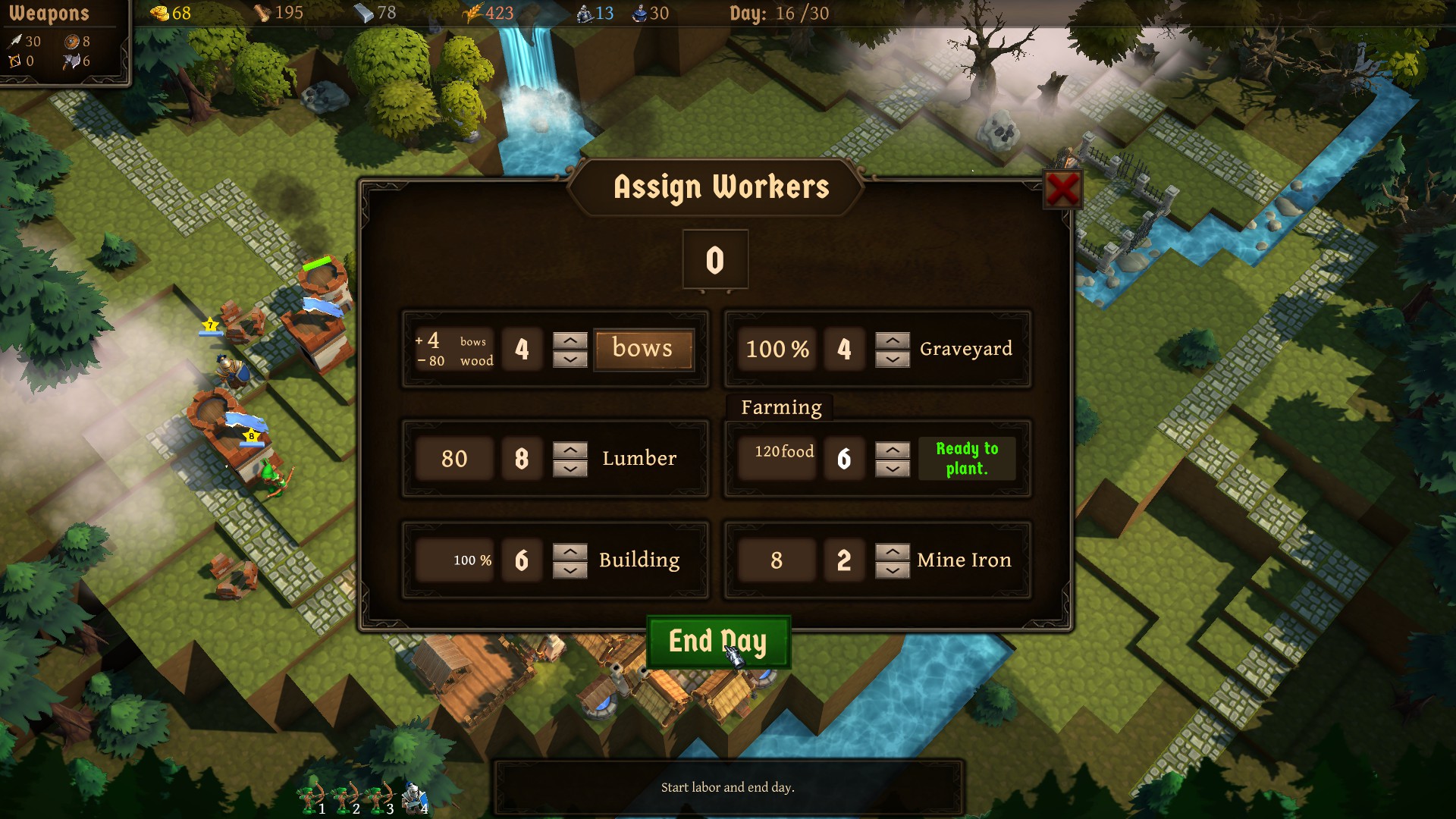 Combat is in real time, with tactical pause (actually very slow motion), during which you can issue orders. In typical RTS fashion, though, it’s not really that strategic, normally just involving selecting as many units as you have available and directing them to attack. This is made worse by the fiddly UI issues that make selecting units and using their special abilities more difficult than it should be.

The balance is very weird, with towers typically requiring fewer resources and providing more consistent combat ability than most troops. In the end I played through most levels using only arrays of towers and my heroes. This had the added benefit of not feeling so chaotic and requiring far less micromanagement than combat with large numbers of troops. Troop characteristics aren’t visible during the game (only from the help menu), and there’s no real indication of what happens with increased levels. Selecting non-hero unit special abilities is a nightmare in combat; I just gave up on it. The ability to tell units to use their abilities automatically would be very welcome.

Hero development is welcome, though the lack of any new special abilities as you gain levels, and the random assignment of characteristics, are a bit naff. (ProTip: reload your latest autosave — there are no manual saves! — if you don’t get the choice you want.) The hero items are probably the most interesting aspect of hero development, and they’re randomly encountered. 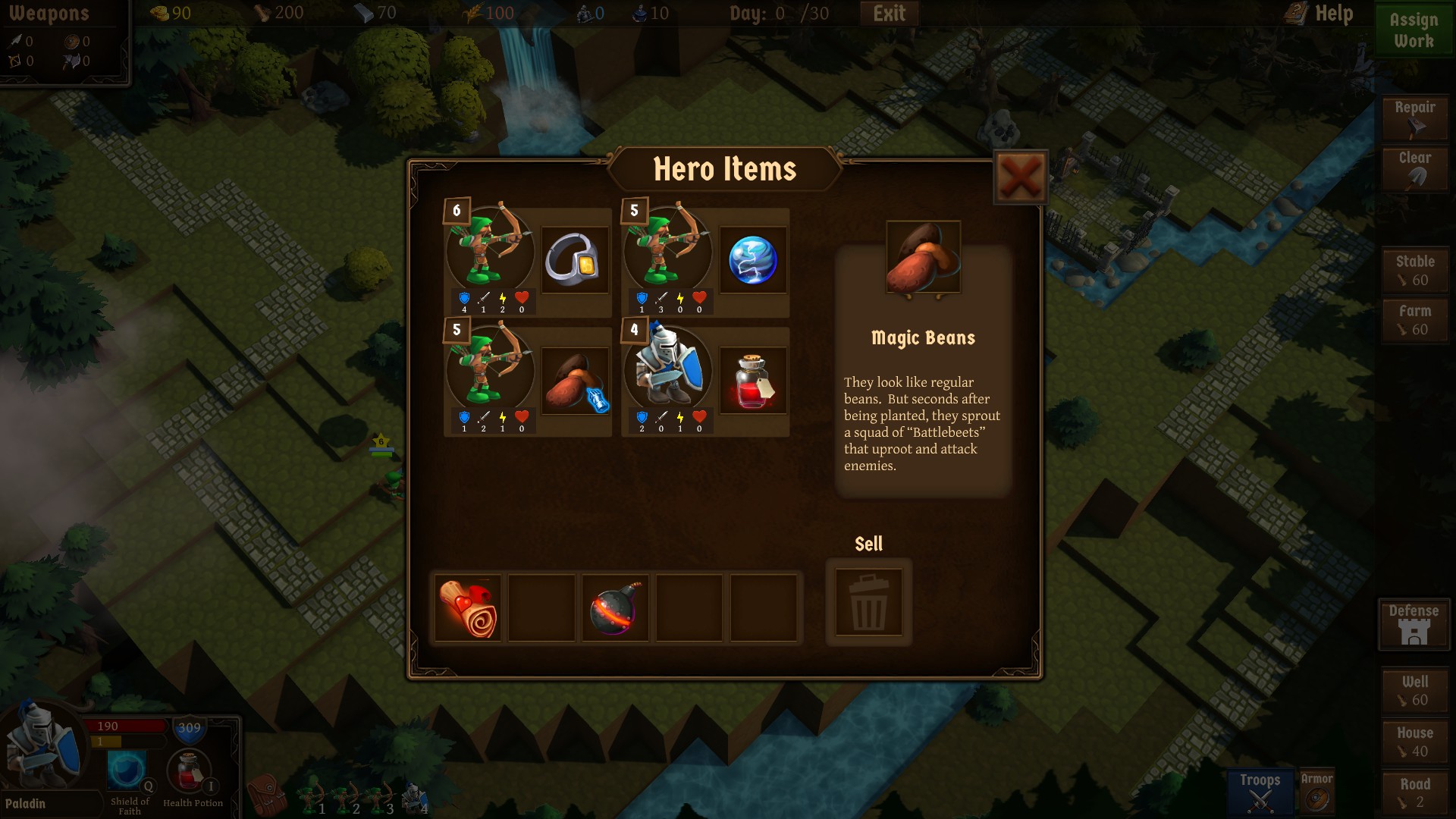 ValeGuard is also very buggy. I think that’s generally acceptable in an Early Access game, but it’s still worth mentioning because it has so many bugs. These range from UI issues, such as graphical representations getting out of sync with underlying positions, graphical indicators disappearing, units getting stuck in walking animations, and the like, through to much more serious and insidious issues, such as enemy entry points resetting on a reload, graveyards becoming permanently bugged, abilities not doing what they should, roads not being placeable, food not calculating correctly, and, in my first game, the tutorial not starting at all. The grammar is also wrong in a few places, which is a bit sad given the relatively small amount of text. I haven’t encountered anything game breaking, though the graveyard bug was close, but it all adds up to a general feeling of unreliability. I expect this will improve through EA. 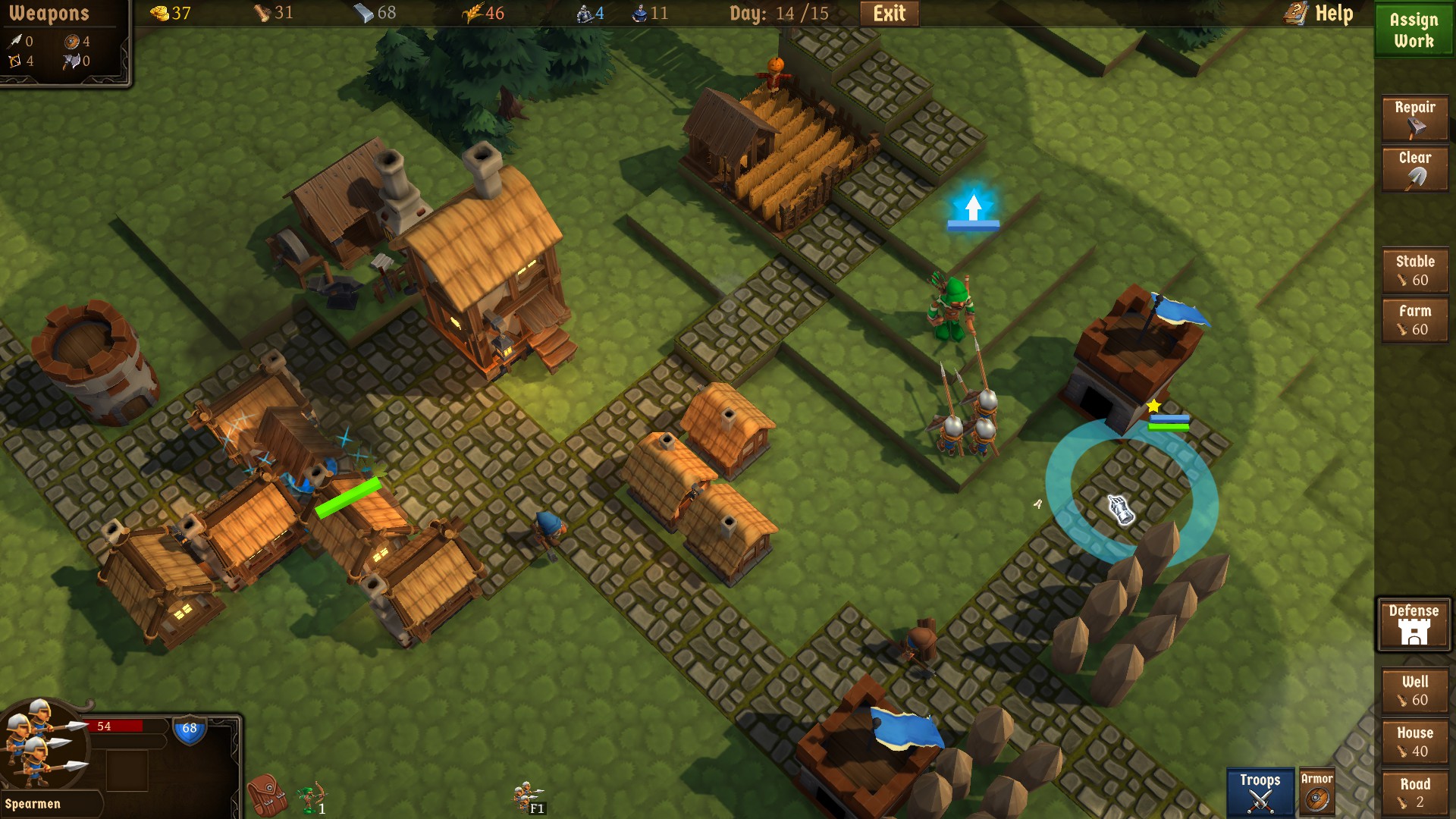 Even though it’s so short, ValeGuard does offer some limited replayability in the form of unlockable hero types and the ability to take a different path through the six levels to reach the end. It’s all similar enough that I couldn’t be bothered completing the campaign more than once, however, as it just seemed a bit too repetitive.

I had to really push myself to finish ValeGuard’s first level, as night after night of boring, repetitive, random encounters rained down on me. I found combat fiddly, village management boring, levels too long and repetitive, sound effects far too quiet and lacking in impact, and many bugs. The game is also very short, with only six levels in the campaign.

After finishing the campaign once, I can see that there’s some fun to be had here, but it definitely needs more work. I think ValeGuard would make a great $0.99 Android game; as a $12.99 PC game I’m not so sure.