REVIEW: City of the Shroud

Reuse as a coding principle is commendable, but too much reuse in a SRPG makes City of the Shroud a rather dull game indeed.

City of the Shroud bills itself as a strategy role-playing game (SRPG). You play a farmer come to the city of Iskendrun to find work and to seek your friend, Ravi, a refugee. You spend your last silver on bribing the guards to let you in and then you’re inside, only to be greeted by a portal full of monsters opening up right near you. (A common occurrence, apparently, though no one seems to be doing anything to prevent it.)

A wily hat merchant ushers you into an alley and — through a fourth-wall breaking tutorial heavy with sarcasm, which carries over into the rest of the game’s script — teaches you to fight. You manage to defeat a wounded monster and are named Hero of the Portals, and introduced to the leaders of each of the five powerful factions in the city.

After running various errands and learning about the six character types available to you, you must choose a faction with which to ally yourself. Then on your first mission for your new allies, a powerful mage appears through a portal and casts a vast magical shroud over the city, preventing anything from passing through it.

It’s up to you to find out what’s happening in Iskendrun and overcome the shroud.

The two core gameplay elements are the story, presented in a typical visual novel style with occasional choices scattered through it, and combat, presented in a 3/4 overhead 3D view and played in real time. 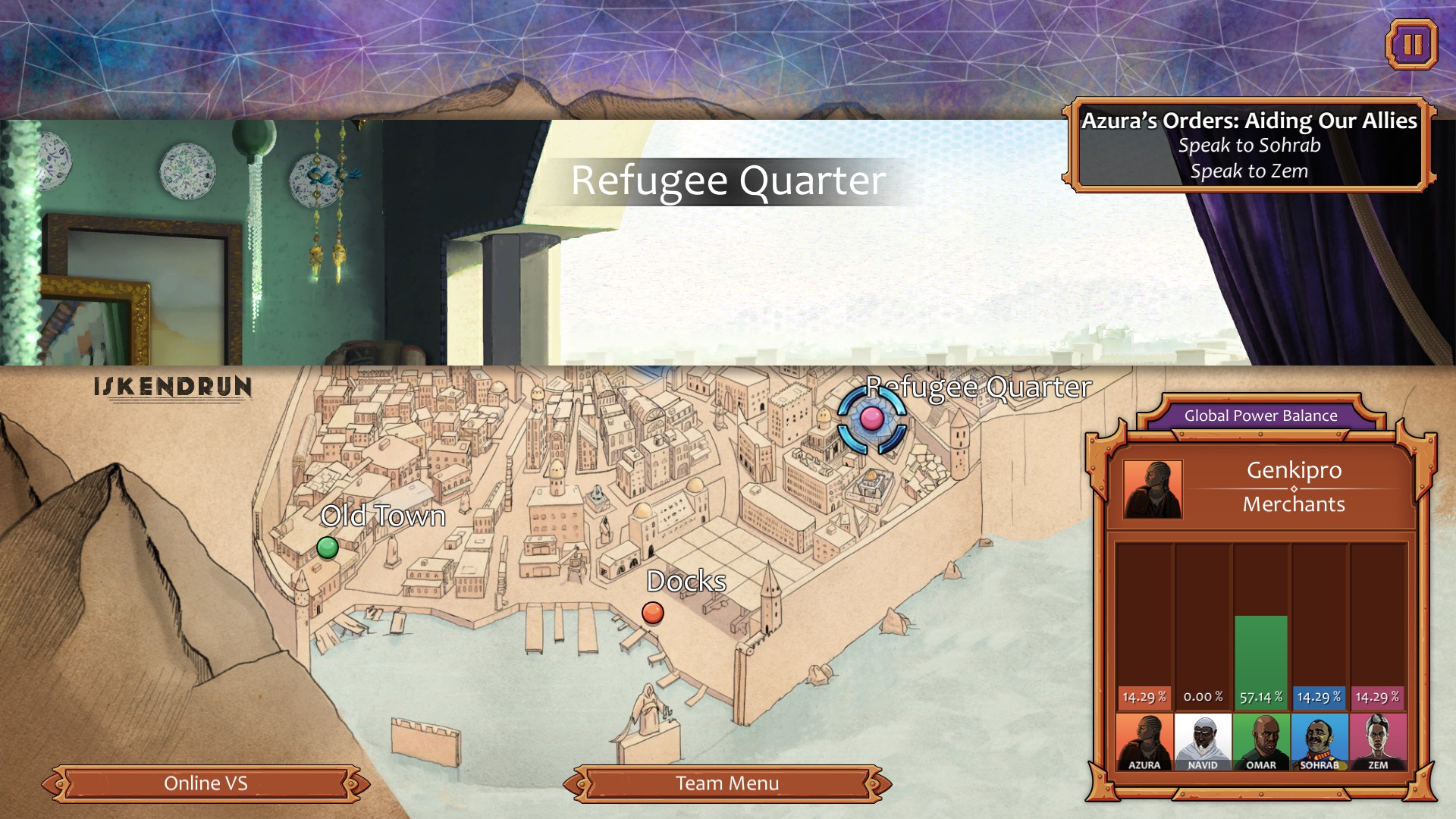 The visual novel sections are fine, though there are none of the normal VN interface functions such as paper-doll animations, text history, speed, skip, etc, and some of the paper-doll character art is reused for multiple characters, which feels a bit cheap.

The combat sections look nice in a cartoonish style, but the camera is completely fixed; you can’t pan, rotate, or even zoom at all, which does limit the appeal. Characters look reasonable, though rather small, and with only half-a-dozen character types everyone looks basically the same — to the degree that you’ll have to look at the coloured circles under the characters to work out which are your troops and which are the enemy. It is nice seeing small areas of the city from a different viewpoint, but they don’t really differ enough; the slums look much the same as the noble section. 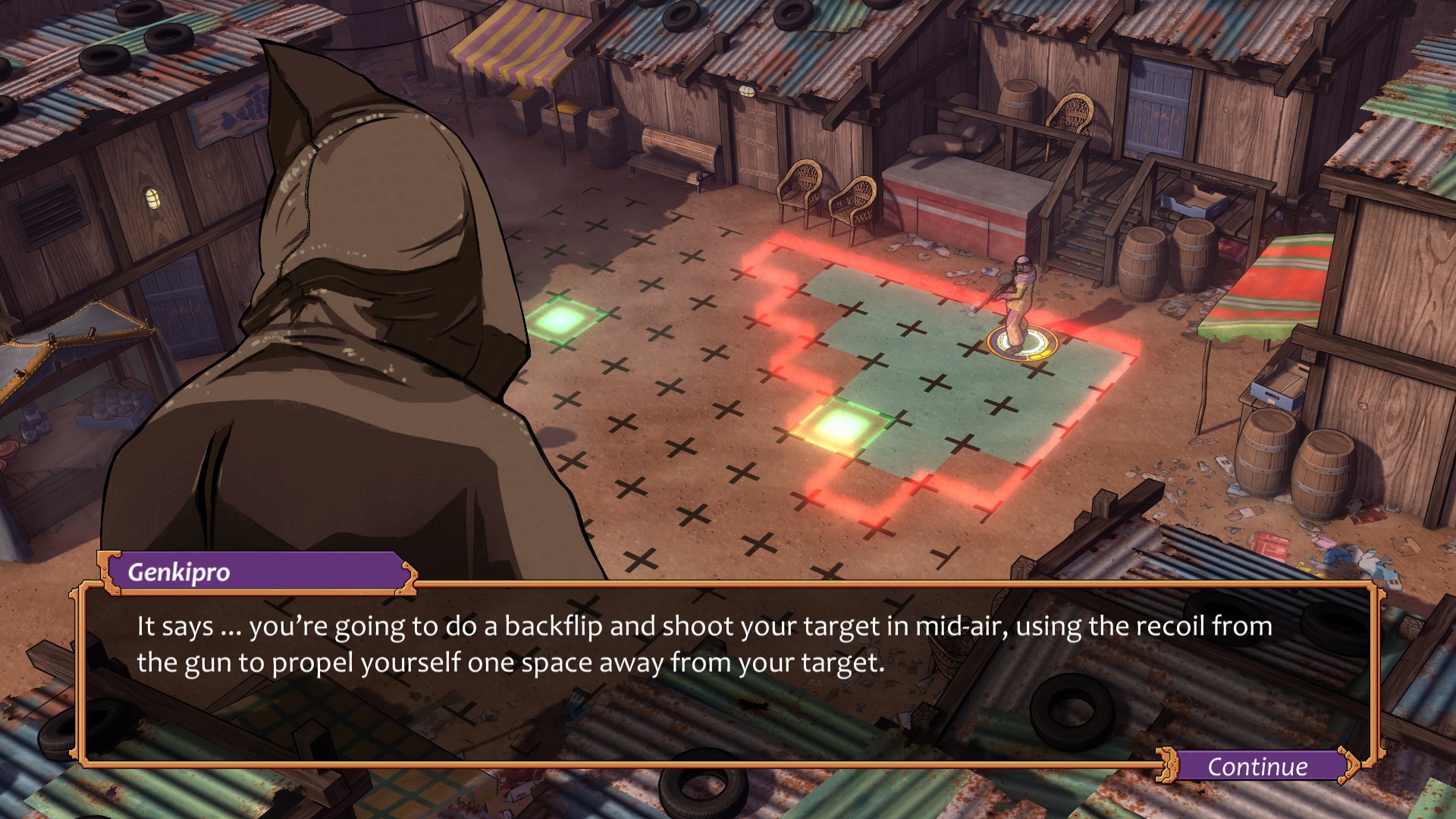 At first I found the interface confusing, but after playing for a while I realised that it’s not really, it’s just very minimal. Don’t go looking for any in-combat status windows, inventory, character information, etc. — they don’t exist!

There are a few music tracks that are repeated in the VN sections and a combat track, too. They’re okay, but nothing to write home about — they’d fit an action cartoon or anime well. The title music seemed to me to be completely inappropriate to the setting: boppy instrumental dance music. Sound effects are pretty bad, with interminable scratching sounds while the text is written during the VN sequences and poor cracks and whooshes that don’t really give any obvious indication of what they represent in combat. I sort-of hope they’re placeholders, but I doubt it.

There are a number of graphics settings. I had everything set to Ultra on my GTX-1070-based laptop and didn’t encounter any performance issues. 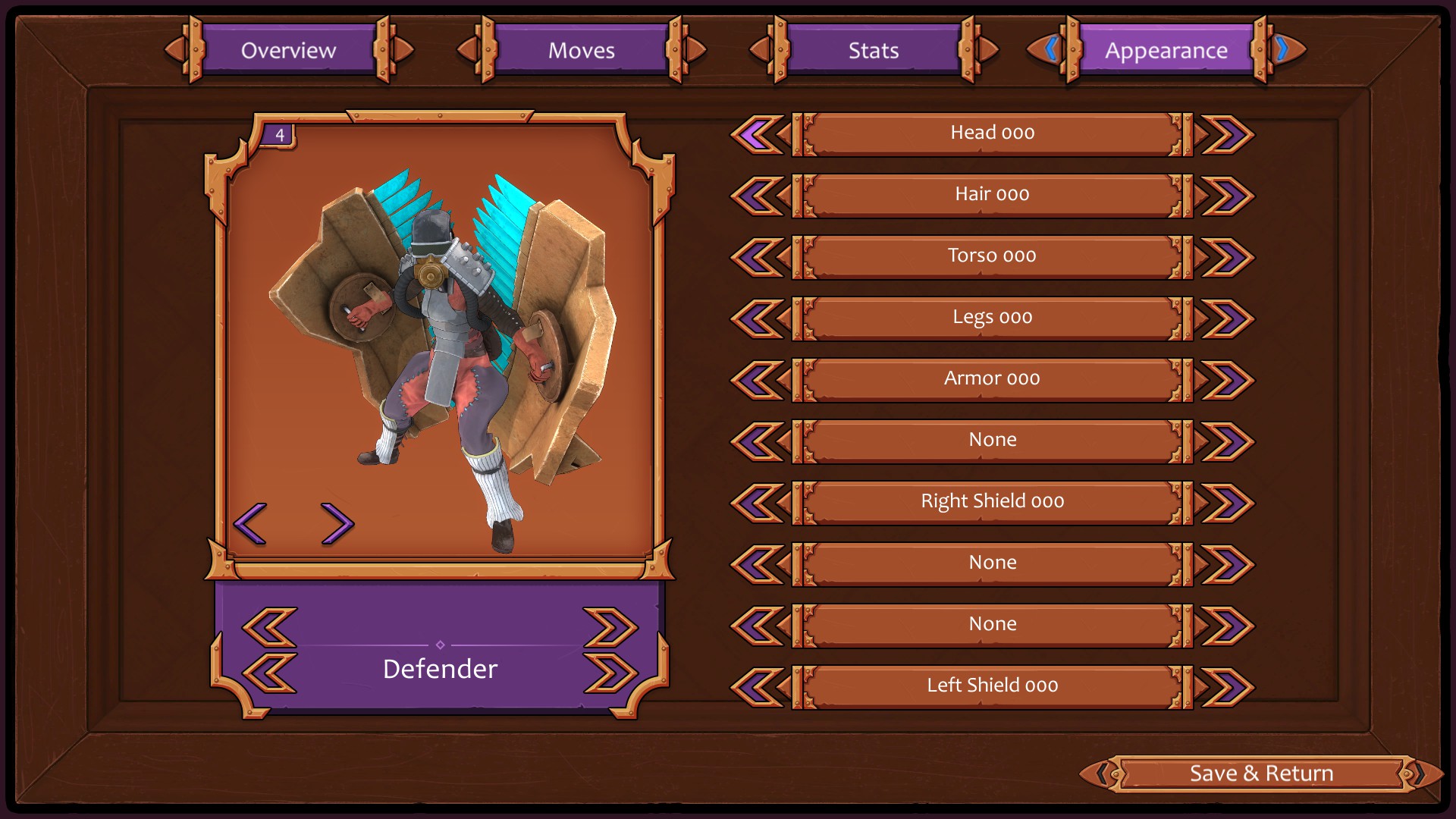 While the Steam store page for City of the Shroud claims the game is a “MMO” game, you can ignore that; the campaign is solely single-player, and multi-player options are limited to one-on-one skirmish-style battles. The game’s gimmick is that decisions made by campaign players are used in some way by the developers to direct the story in subsequent chapters — the current game is only chapter one of a larger story.

The visual novel side of the game is reasonably well done, though with so many characters with similar personalities and each faction seeming much like the others, I was hard pressed to actually care much about any of it. The plot is interesting enough and the script is mostly well written with only a few errors, but it’s interspersed by battles every few screens, which interrupts the flow. 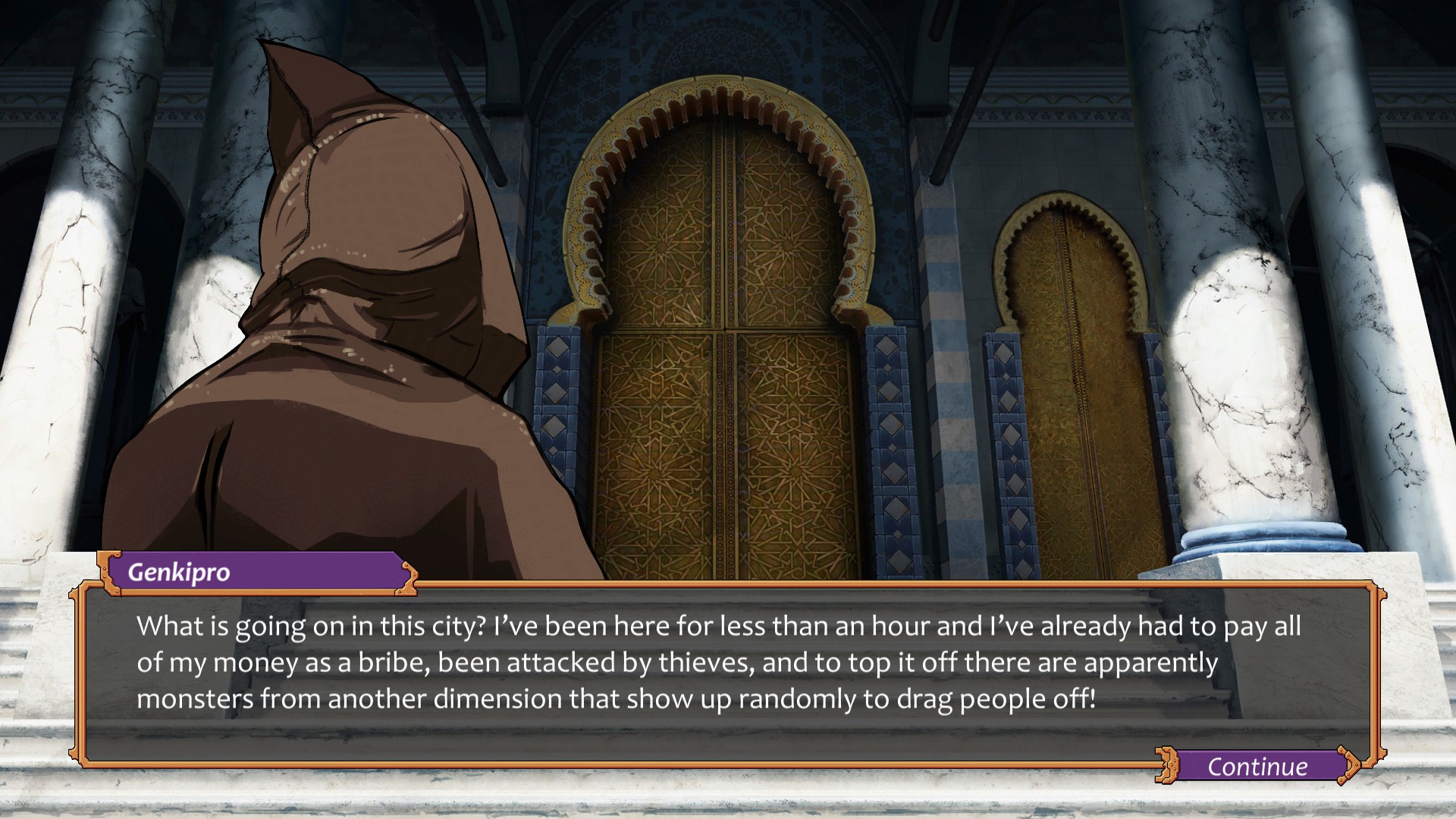 The battles are fun to begin with, however, after I’d gained access to all six of the character types — with the first 60-90 minutes or so — I found myself rather bored with it all. You see, each battle is essentially the same as the last. You can choose four characters from the available six archetypes, and there’s absolutely no individual character progression. Sure, you very occasionally earn new combo moves or get special gems to upgrade your characteristics (minimally), but all characters of any particular type can use those combos, and at least within the first few hours’ play the gems make so little difference as to be irrelevant. 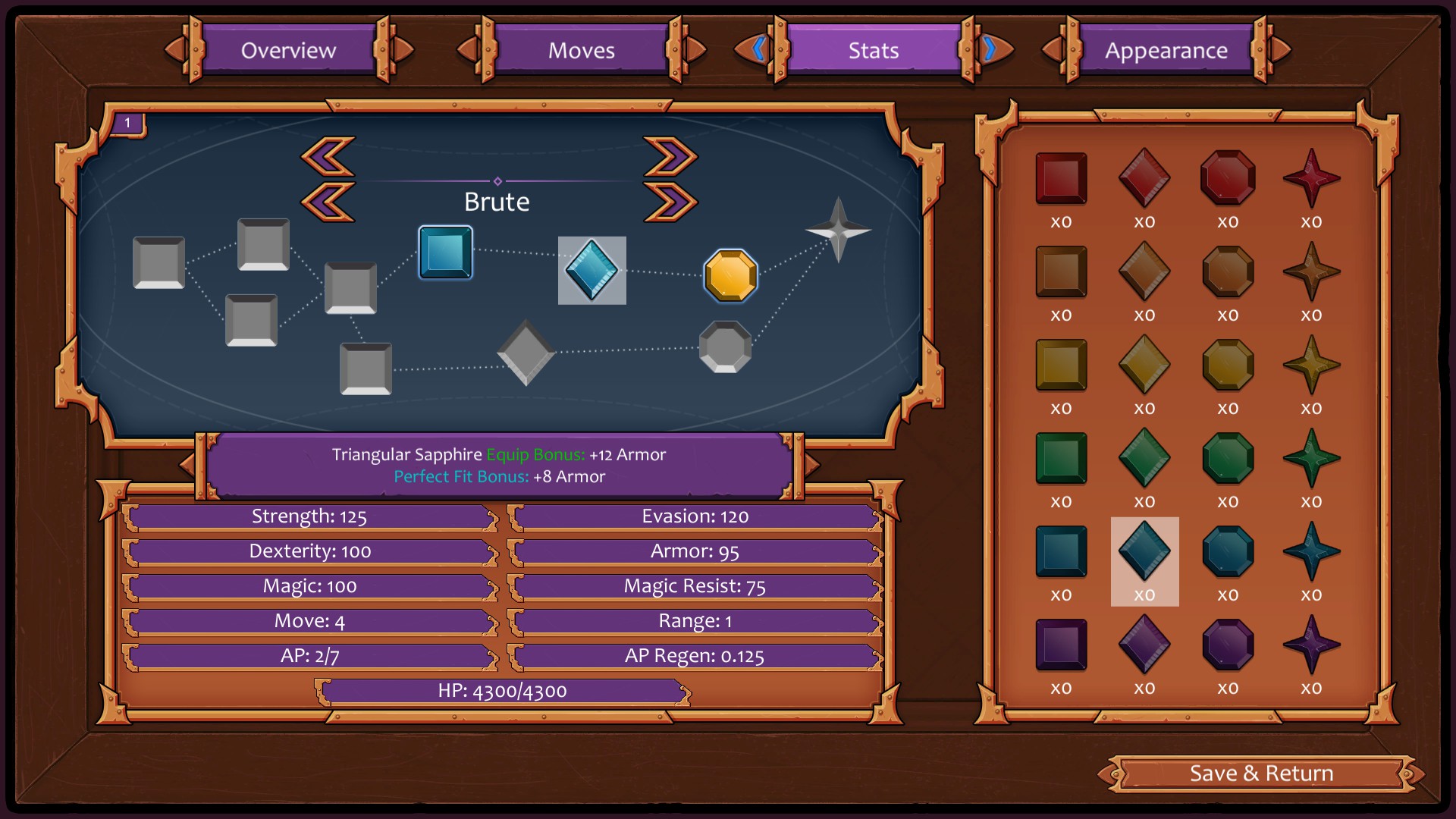 To make it even worse, though, it seems that the enemies you fight are chosen from the same six character types! It doesn’t really matter whether you’re fighting priests, city guards, thieves, citizens, or portal ‘monsters’, they’re all basically the same. Sometimes you’re outnumbered or outclassed by enemies who have more powerful abilities than yours, but they all look the same, and every combat seems to boil down to repeating the same few actions over and over again. *yawn* It’s possible that later on there are some more interesting enemies, but after two hours I was finding it a chore to play. After four I’d had enough.

I don’t even really think of the game as a RPG at this point. There’s no inventory, no character development, no equipment, and the combat has so few options in the early game at least, that it feels more like a slow-action beat-em-up than anything else. Combat would be better and more strategic if it were turn-based, allowing you to sit back and think and evaluate without needing to worry about forgetting upcoming moves or enemies moving at inopportune times. With the way action points work it’s nearly there anyway, so the developers may as well give in and get rid of the time element entirely; it would make for a better game, I think. 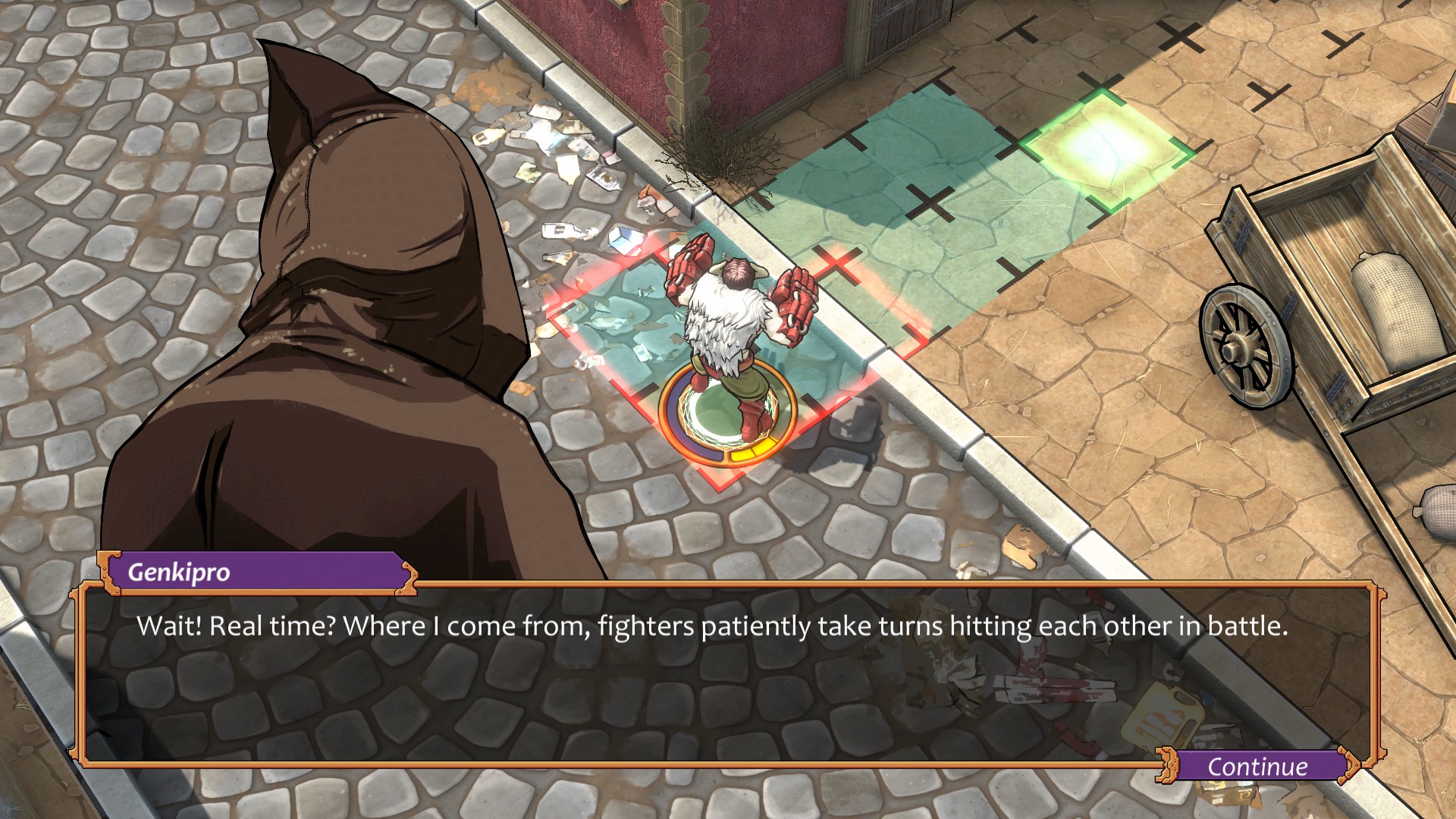 I played a pre-release version, so gameplay may be improved by the time it’s released. The game is stable, at least, and I didn’t encounter any bugs, though load times are long and the strange requirement to always be connected to the game’s servers is a bit annoying; I had a few disconnection dialogs pop up on me, but immediately pressing the reconnect button has fixed them. 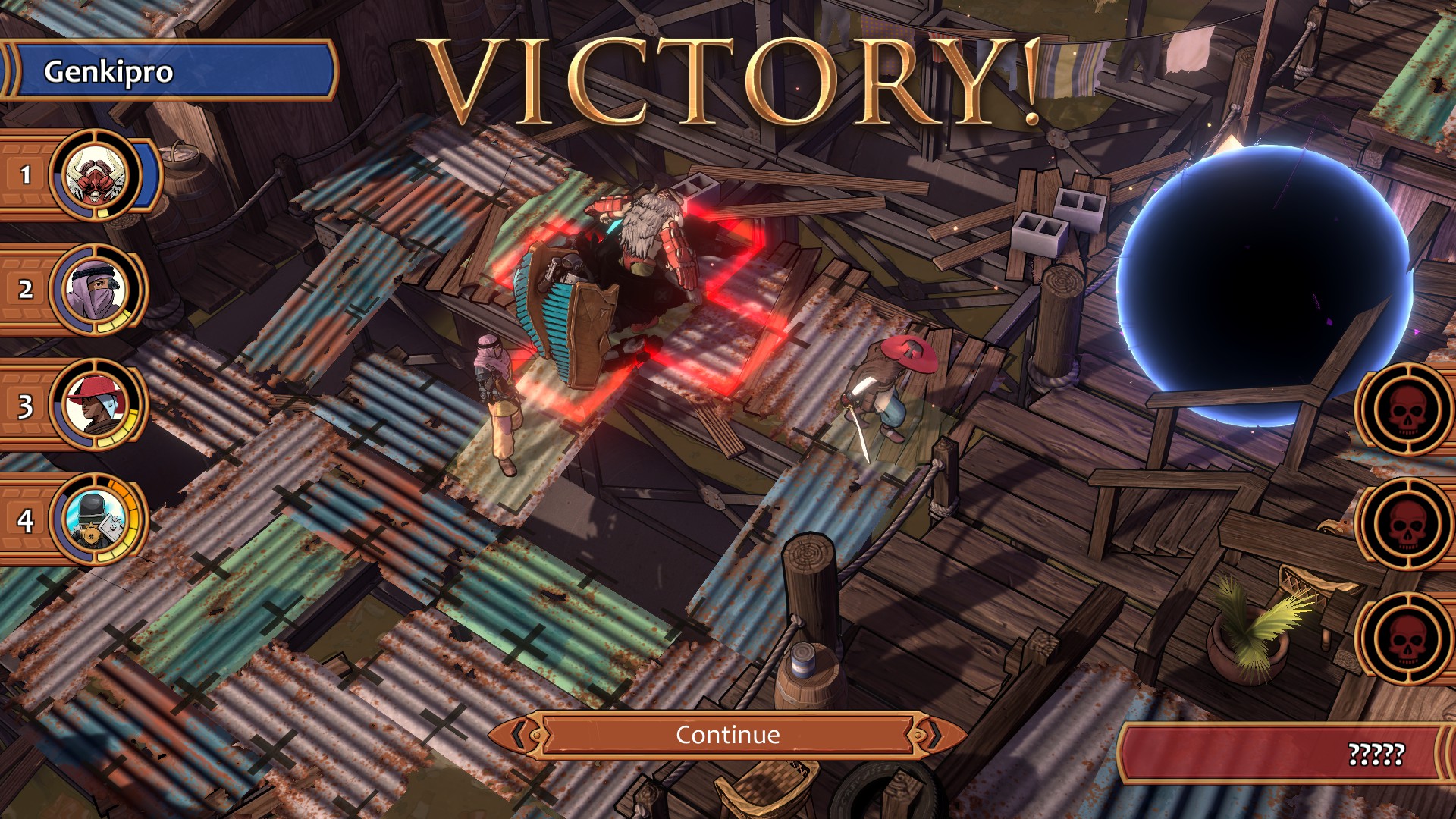 After the tutorial I was already getting a bit bored, but in order to try to give it a chance I kept going. After playing for over four hours fighting the same enemies over and over, and with very few options available to me, I simply couldn’t be bothered anymore. It’s not actively bad, it’s just boring.

The script is well written and moderately amusing in a sarcastic way, but most of the characters have very similar personalities and sense of humour. Combat would be better if it were turn-based, but even that wouldn’t save City of the Shroud from becoming very boring very quickly. Perhaps more character and enemy types reveal themselves later, but so far I’ve only encountered six, each with limited abilities, and no real character development. Every battle is the same as the next and after the first few they just felt like a chore. There’s simply not enough variation to hold my interest.