The Roguevania messiah has finally arrived: hacking and slashing is more satisfying than ever.

If you lived under a rock under medieval ruins, you might wonder: what is Dead Cells? Simple, it’s a roguelite action platformer in the vein of Castlevania. Strictly speaking, Dead Cells is not a Metroidvania as it is impossible to travel to previously visited levels, but it definitively feels like one , so I have no qualms with using the newly coined term “Roguevania”. When Dead Cells hit Early Access in May 2017, it was an instant hit. Rather than endlessly rotting in alpha, already little more than a year later the game receives its final release; thus, it is time to check whether Motion Twin’s baby’s reputation of a Game of The Year contender is still intact and whether the game delivers on its promise.

Dead Cells puts players in the shoes of a bunch of cells fitting into the shoes of a freshly decapitated corpse. Yummy. The aim is to escape some sort of prison island that reconfigures itself each time our protagonist dies and its smoky head finds its way back to a new corpse, ready for a new adventure. While going back to a previously visited level is not possible, each level is built like a Metroidvania castle with several rooms to explore and teleporters to connect the different parts. Also, the levels can have several exits leading to different sets of levels which means that the order by which someone plays the adventure is not strictly linear. 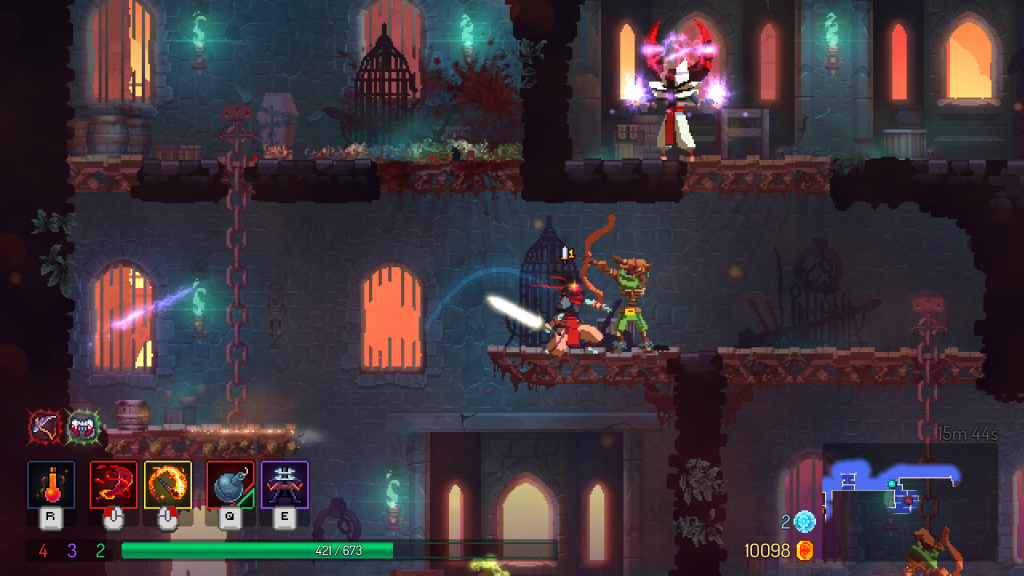 Metroidvanias usually gate some paths behind obstacles that can only be cleared once the player character has acquired some specific powers. Dead Cells is no exception to that game design rule, as there are many different interactive elements that require runes dropped by bosses. My problem was that all these dead ends are laid on the path of the player with no clue as to where to find the right trinket, and interacting with them to no effect was frustrating. It’s not a big deal as it becomes obvious that the player needs to beat the boss of each level to unlock these trinkets, but I wish information was conveyed a bit more properly. 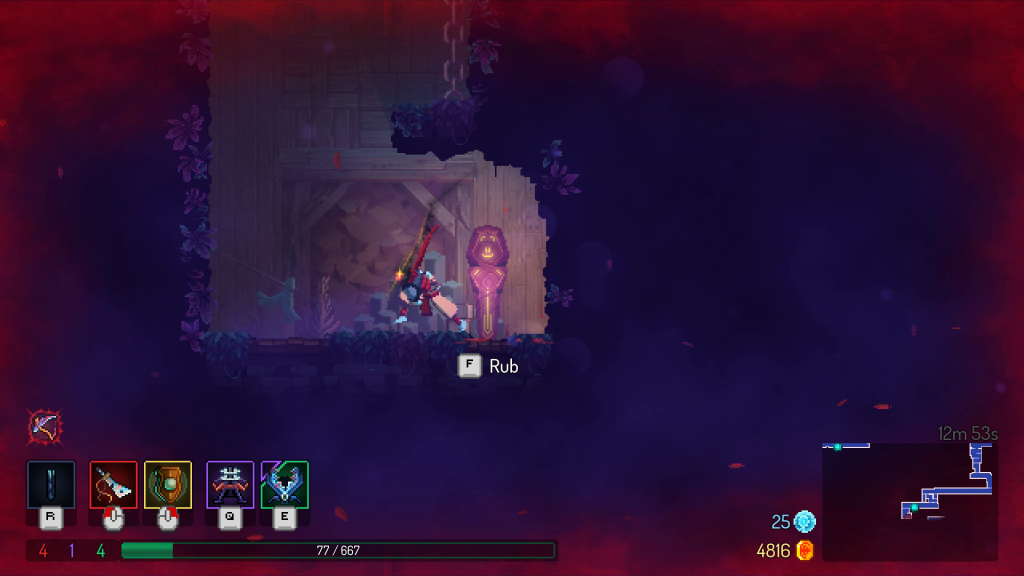 Information obfuscation is one of the dumb staples of roguelite games since The Binding of Isaac (leading to play with a browser open to display the dedicated Wiki), but thankfully due to backlash roguelites have started to display more useful information such as the damage that each new item does. Dead Cells does show this information. Another issue with many roguelites is that randomness can completely ruin a good run, and Dead Cells is admirably free of such frustrations. For instance, it is always possible to refill a health potion at the end of a level. The frequency of stats boosts is similar across runs. The rooms generated are not suddenly absurdly difficult. Which then begs the question, if each run is so similar, why would you want to play the same thing over and over? 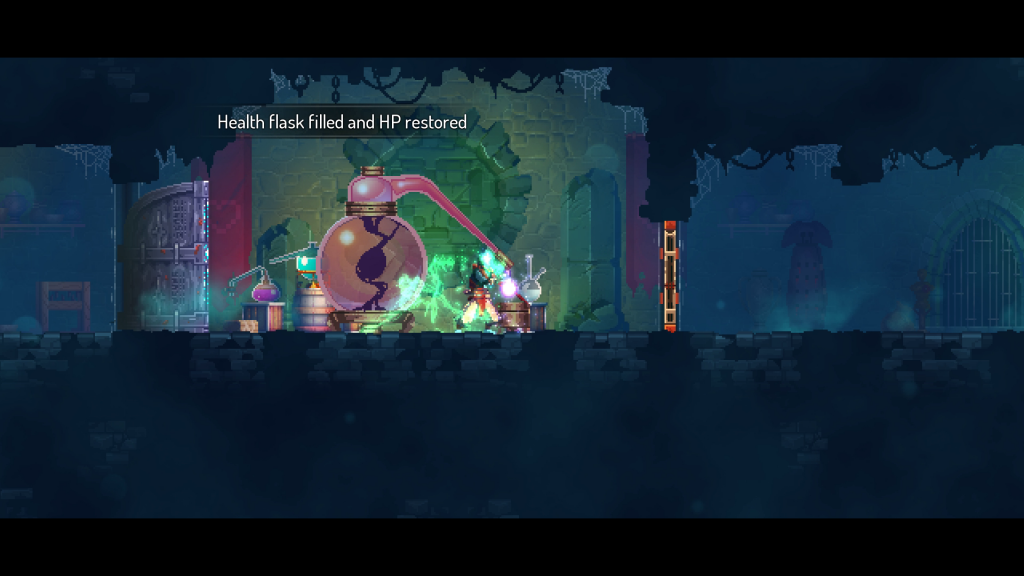 In the case of Dead Cells, the answer is because the combat mechanics are incredibly fast and satisfying. Roguelites tend to force players to start with a rather weak main character, but in Dead Cells, right from the start it is possible to perform a dodge roll, a double jump, drop down for a powerful dive attack, knock out enemies behind doors and chain stun enemies. Which means that the usual dread of a new start is quickly replaced by the feverish flow of brutal death. Each attack feels impactful while the movements are empowering. Two main weapons can be picked right from the start, usually a sword and a bow, but it could be a whip and a shield according to what you unlock as you play. Completing this arsenal are grenades or traps. There all sorts of traps to stun or slow enemies, or turrets engaging enemies automatically as long as you are nearby. There are random attributes to all these tools that can sometimes create incredibly powerful combos, such as a thrown dagger that burns enemies followed by an attack from a sword that deals double damage against burning enemies. Each weapon or trap feels a bit different, while they are all pretty well balanced. That is, except that their levels are increasingly better as you progress through the levels. The combat is a perfect mix between action-packed and tactical, leaving players free to let their own playstyle shine. The game has a huge emphasis on speed, but it remains possible to play it slow and methodical. 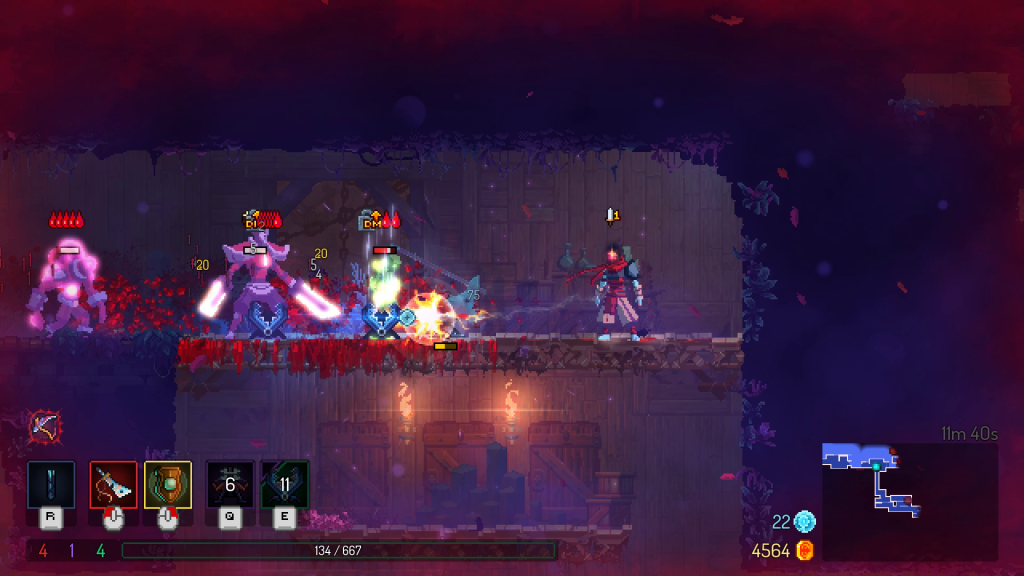 However, as satisfying as the game is, I found that the meta/permanent side of the game design was not very well done. There are blueprints to unlock new weapons to find, which is fine. But increasing the effectiveness of each item requires one to spend the cells of dead enemies in between levels, and this process is extremely slow. So slow that it becomes a tedious grind. Here is an example, for a higher number of health potions I needed something like 240 cells. Completing the first level of the game earns on average 14 cells. That makes it 17 runs just to upgrade one stage of one item. Brutal. Sure, you can get more cells in the next levels, but if you die before finishing a level you lose the cells that were not spent. And also, I felt that the levels were way too long. I couldn’t help but feel that this grind felt like a good idea during Early Access to keep hardcore players busy between updates, but for the final release of the game, this system is unnecessarily time-consuming and dull. Conversely, the game constantly reminds us that it wants to be a speedrun as there is a timer ticking on the screen and some doors in the levels close after a short duration of time. I suppose that it is great for end game players who do not care about hunting every single soul, but seeing that number and that door kept breaking my immersion in the castle I was exploring. 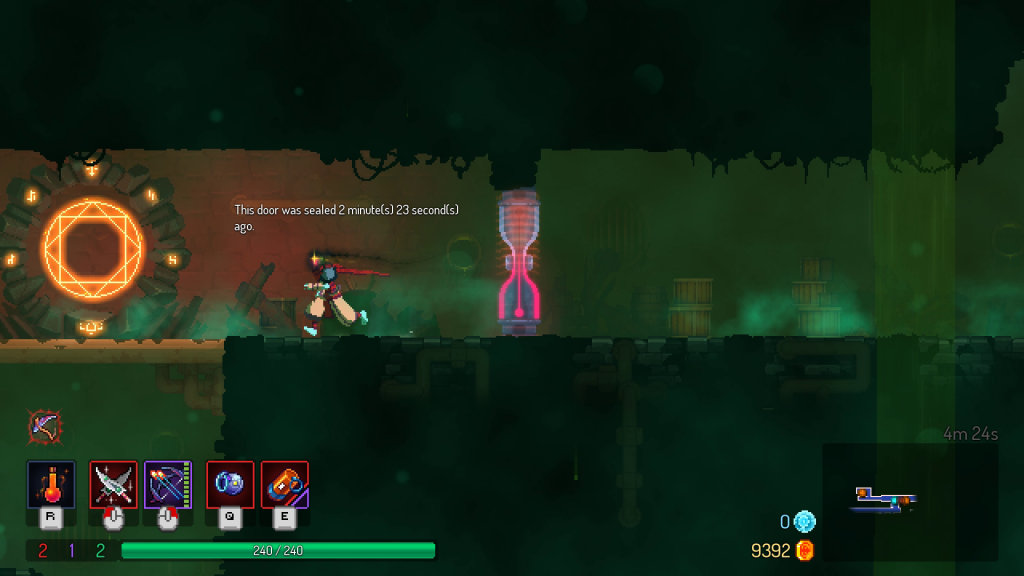 I am very happy with most of Dead Cells’ method for handling its roguelite mechanics, but nothing will change the fact that run after run it becomes very familiar and repetitive. Fun and cool repetitive is still repetitive, and in the year since Dead Cells blew me away with its Early Access Into The Breach was released. Into The Breach granted complete freedom with the order in which to progress through levels while letting players completely choose their starting gear while managing to make each run feel rewarding. To be more specific, there were things like specific moves to pull off (kill 4 enemies in one turn with the laser mech, push an enemy into the water) in order to get points to buy new mechs, and I was always very quickly progressing through the unlocks without grinding, while being stimulated by new objectives in each run since each mech squad had its own set of challenges. What I am trying to say is that while Dead Cells shines gently in comparison to older roguelite games, Into The Breach is a bright lighthouse that makes Dead Cells’ light pale in comparison. Into The Breach and Overwhelm let players choose in which order to explore their world. Without even bringing Into The Breach into the equation, several recent roguelites (such as I Hate Running Backwards) have opted for a system of teleporters to let players choose from which level they restart their next run. I would have liked to see any of these designs implemented in Dead Cells as I have gotten sick of playing that first level over and over, but it would still be hampered by its RPG mechanics requiring to play the early levels to increase the stats of the character for more health and damage. Actually, I would have liked to see each run become a shorter adventure of interconnected levels (in the true Metroidvania sense with a single huge world and maybe save points) that puts emphasis on replayability, in a similar model to Into The Breach (to answer my question in the introduction, the latter will very likely be my Game of The Year 2018 instead of Dead Cells although I would not be surprised if Dead Cells tops many lists). 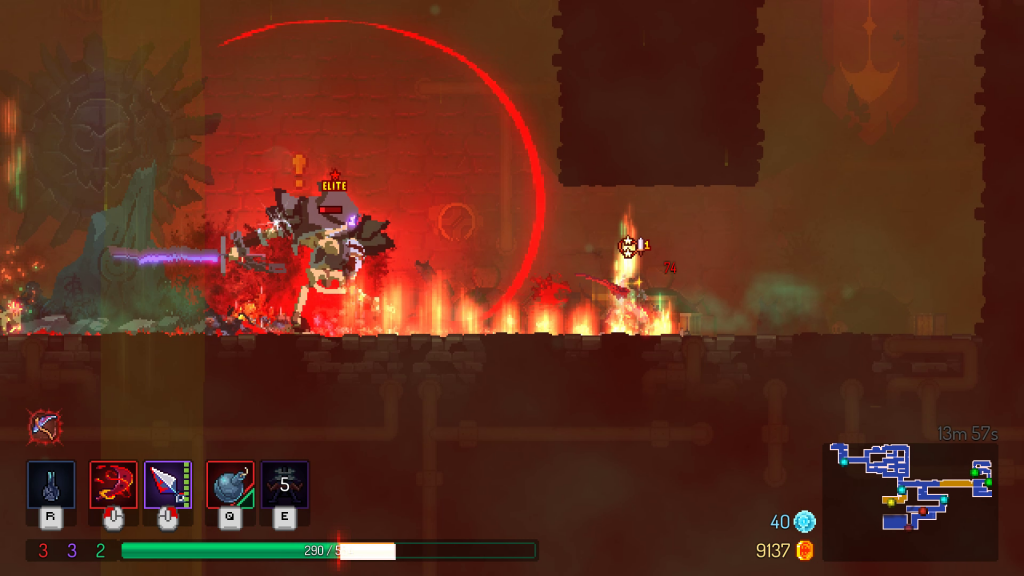 Visually, the game is stunningly gorgeous. It looks like pixel art but it’s actually smoothly animated in 3D before being rendered in 2D. The world is oozing with details, there are particles flying everywhere around the action, the lights are giving depth to the rooms, each type of level has its own identity in terms of style and layout, the atmosphere is eerie and epic at the same time. I only regret the stylish character suddenly acting dumb with goofy body language when interacting with other characters, but it’s a minor complaint. 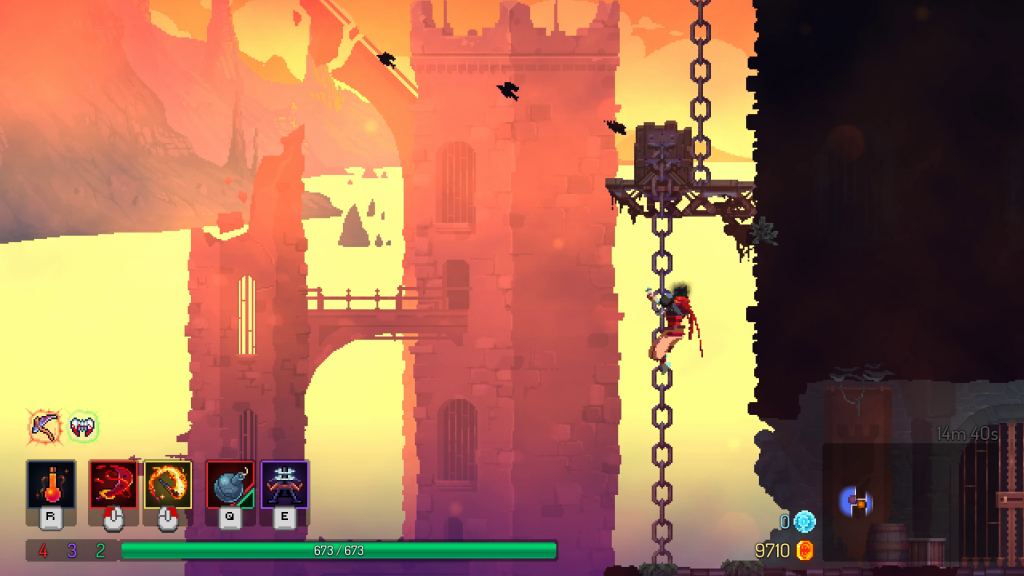 While the game tells players directly that it recommends a controller to play it, I do not agree with this statement. Remember my paragraph on the game mechanics and combat? There is a button for roll, jump, attack 1, attack 2, grenade 1, grenade 2, healing and so on. I felt like I was gripping my gamepad with ten tentacles instead of gently resting my fingers, and I had trouble chaining all these actions effectively. While with keyboard and mouse the controls felt very natural to me, with attack 1 and attack 2 on the mouse and the grenades on Q and E. I bound jump to W (up) as I usually do, and I was just annoyed by dropping down platforms and the dive attack since it can’t be done with S (down) only, it had to be a combination of S (down) and W (up/jump) at the same time which is ridiculously impractical. Thankfully, I was able to keep two bindings for jump and I could still press the spacebar with S (down) to perform this move, but I wish S (down) was enough. 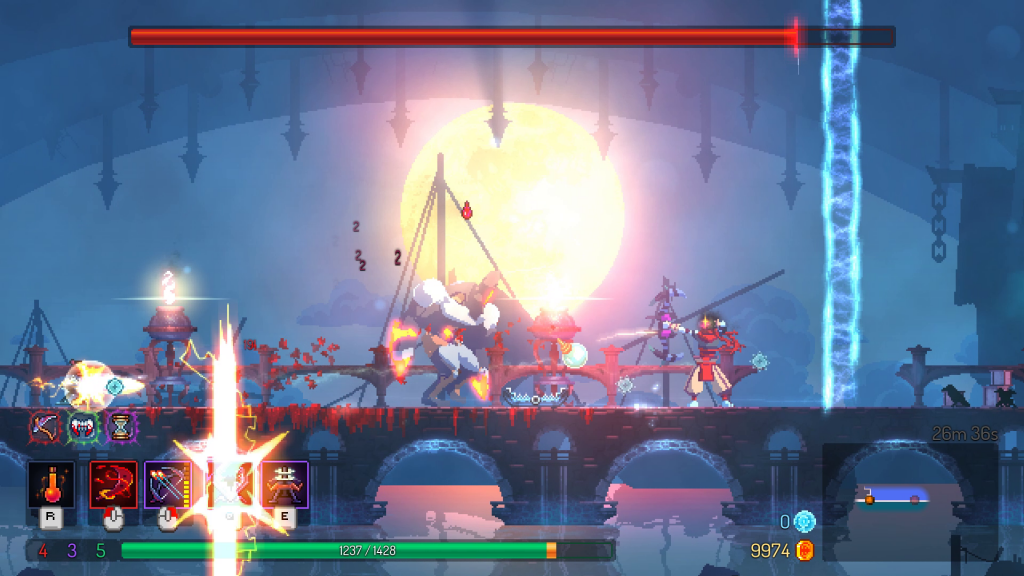 Dead Cells has a few shortcomings; grindy permanent progress being my worst offender, followed by repetitive runs as after a while each new exploration feels too similar and lengthy. However, there is a welcome variety in the weapons, further enhanced by attributes making them even more sadistic. Compared to many other roguelites, Dead Cells is predictable and players are not subjected to the wrath of bad luck. Despite some light issues, Dead Cells is an incredible action game that manages to be both brutally satisfying and tactical with ample depth. Right from the start, the possibilities are truly empowering, and it is a treat to fight in its fantastic ruined castles. This game scratches my Castlevania itch pretty well while being one of the best roguelites out there even though the formula has progressed much farther since Dead Cells’ first appearance. I had some complaints that I wanted to address since most reviewers don’t, but it’s clear that this is a major release that will please hardcore gamers while deserving its success, and this game is likely to have an everlasting impact on the so-called Roguevania genre.