Teething pains aside, while this isn’t a casual experience or accessible to new comers to VR at all, Escape the Grid VR does provide context to motivate veterans to push themselves through what amounts to a challenging obstacle course requiring skill and precision.

Escape the Grid VR is a 3D puzzle platformer in which you follow around a floating talking orb of light which encourages you to descend deeper and deeper into the trap filled labyrinth which is “the grid”. An immediate and unescapable comparison can be made to Climby or Hotdogs Horseshoes and Handgranades “Gunasium”. Swing your arms to run, grab marked climbable surfaces to, well, climb and generally fling yourself from platform to platform trying to reach the end of each level. 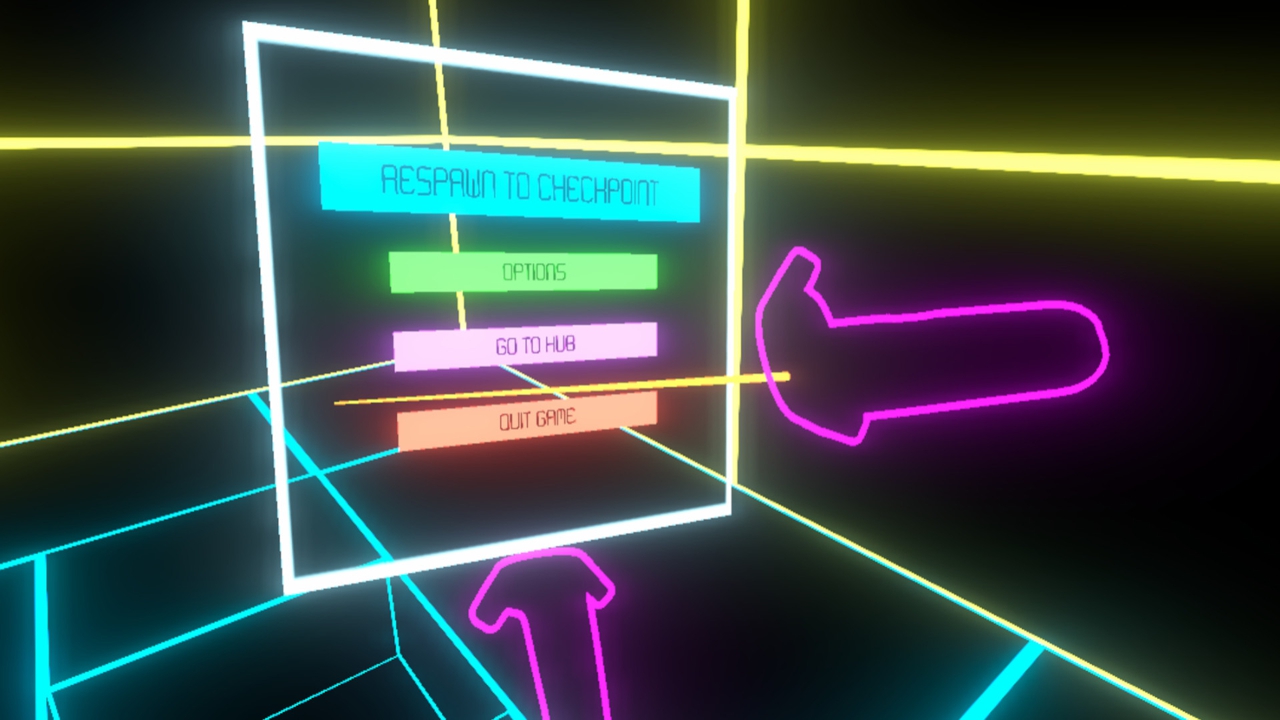 What separates Escape the Grid VR from its competitors in this small but clearly growing genre is the presence of what I would describe as an antagonist who delivers a narrative as you progress through the game, giving you a motivation to keep pressing forward to see how things unfold. You will need this motivation because the other thing that makes it stand out is its extreme difficulty curve. Though calling it a curve is a bit generous, it’s more of a difficulty cliff and when you finally make it to the top of that cliff, tired and exhausted, you will slip and fall and have to climb all the way back up again from the bottom.

I wish that was a metaphor but it’s actually a description of the gameplay. Everyone has had that experience in video games where they’ve had to climb to a top of a tower only to miss the last jump and have to start again from the beginning. Escape the Grid VR is virtually an art piece embodying that experience with the added flailing and visual feedback of the ground rushing up to meet you that VR adds to accentuate your failure. Now that said this is not strictly speaking a bad thing. 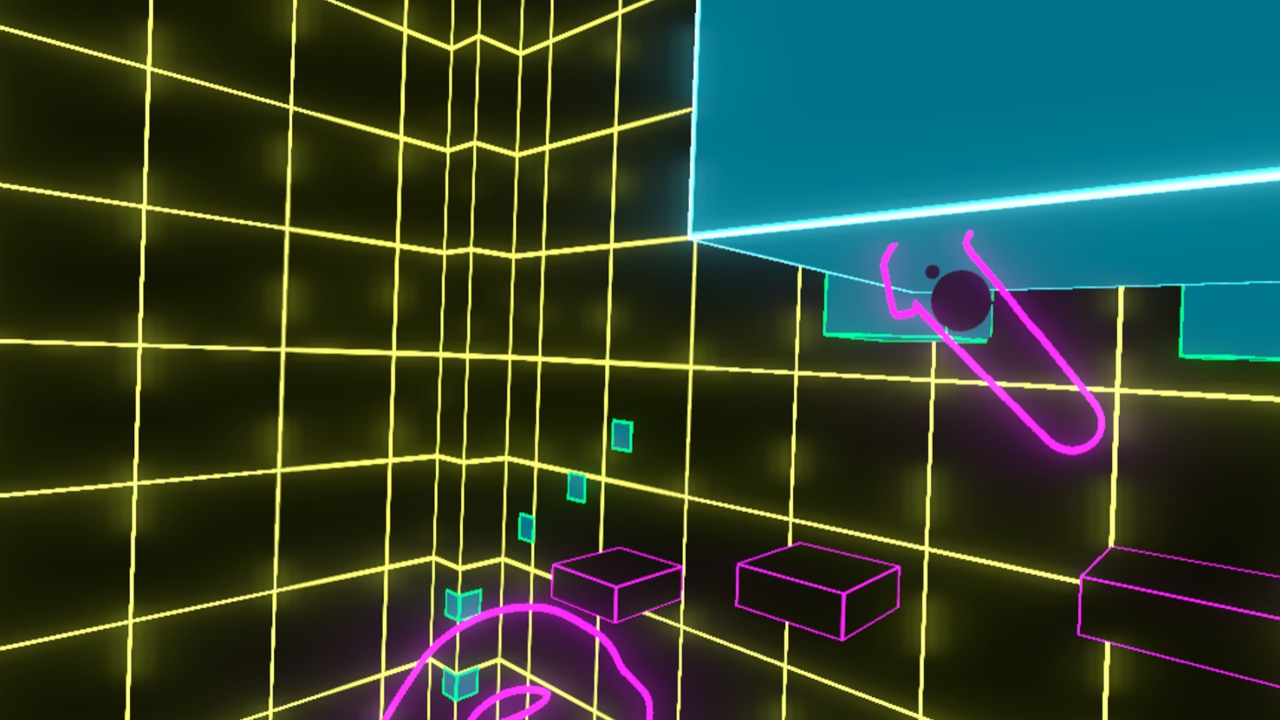 As punishing as the game is, every level can be cleared with practice and persistence. Clearing each obstacle just requires precision and the appropriate amount of patience for your skill level. Most the time you will slip and fall because you were trying to rush ahead instead of carefully measuring your next move. The game demands that each move be accurate if you are to advance. Later it will require certain jumps to be well timed as well.

The game is generous with its checkpoints, so each time you fall you will be instantly placed a short distance back facing the objective you just failed to reach, ready to immediately try again. While not as fast-paced as something like Supermeatboy or VVVVVV, that is essentially the experience the game is leaning towards recreating in VR. While the Steam store page currently lists the game as “Casual” this couldn’t be further from the truth.

The game goes for a retro sci-fi vaporwave style which I honestly didn’t think was going to work going in. One of the main problems with neon light sources and bright lights in general in VR is the Fresnel lens glare effect. I was amazed to discover the game didn’t suffer from that, perhaps because the neon lighting is so ubiquitously distributed. 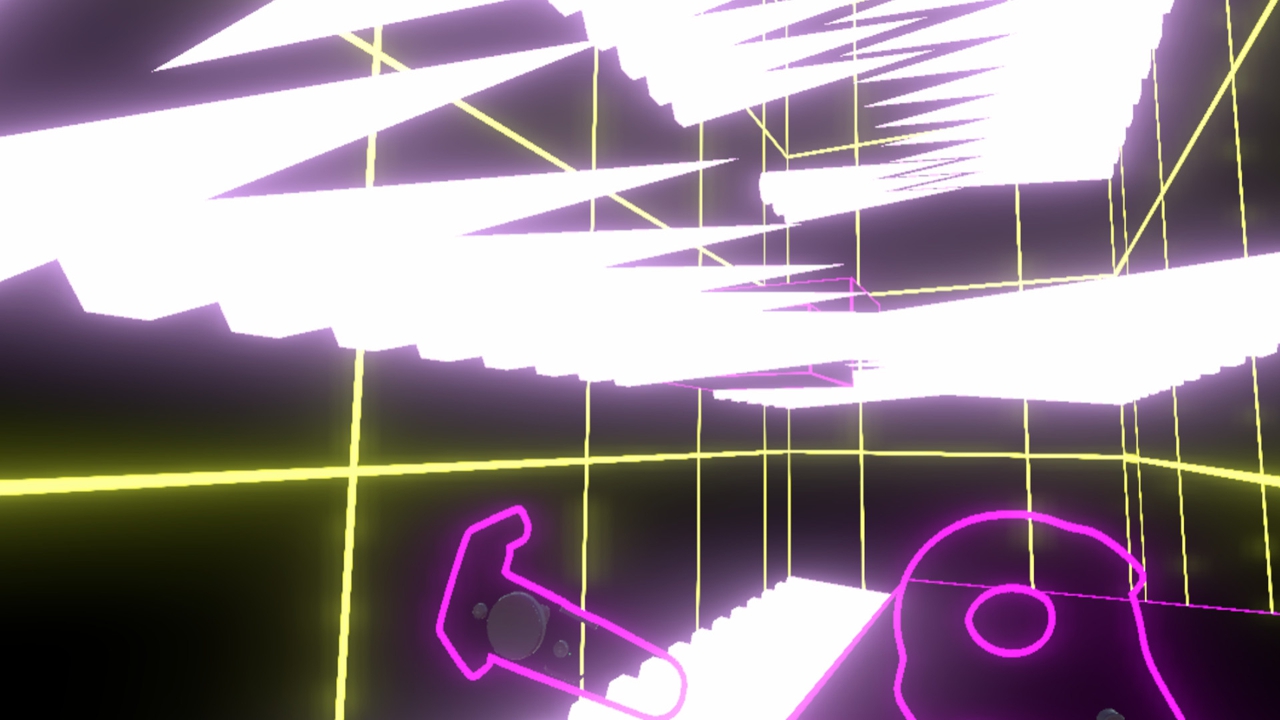 Instead, the game has a slightly different problem in that the lighting on the neon lines is split between each eye. Every line is made up of a string of bright patches like beads that alternate with the gaps in the other eye and overlap. The problem is when you move your head these move in opposite directions, causing a strobing effect.

To that end I am glad the steam store page now has a photosensitivity warning as I know individuals I would warn against even watching footage of the game, noting that as bad as it is in on your monitor it is at least three times as bad in the VR headset. That said, as distracting as this was at first you do quickly get used to it and stop noticing it so you are just left with the neon retro aesthetic the devs were going for.

Like most active VR games stamina becomes a question. While not specifically designed around providing exercise like some other titles, this one will certainly offer your arms an intense workout. There is a lot of reaching, pulling, and pushing which while not as immediately exhausting as constantly punching, does take its toll. Additionally, the hanging means there’s a certain amount of endurance training in there too. If you were looking for another fitness program this game is a good fit.

Early VR adopters have probably long since exhausted the gameplay in similar titles which are designed around easing new players into these new movement systems. To that end, it is refreshing to see a game take the genre to more challenging heights. When you get on top of simply getting around at the skill level the game demands, it starts upping the ante, adding new obstacles and traps to keep the player on their toes while also rewarding them with new abilities such as shields to defend yourself making things even more interesting. 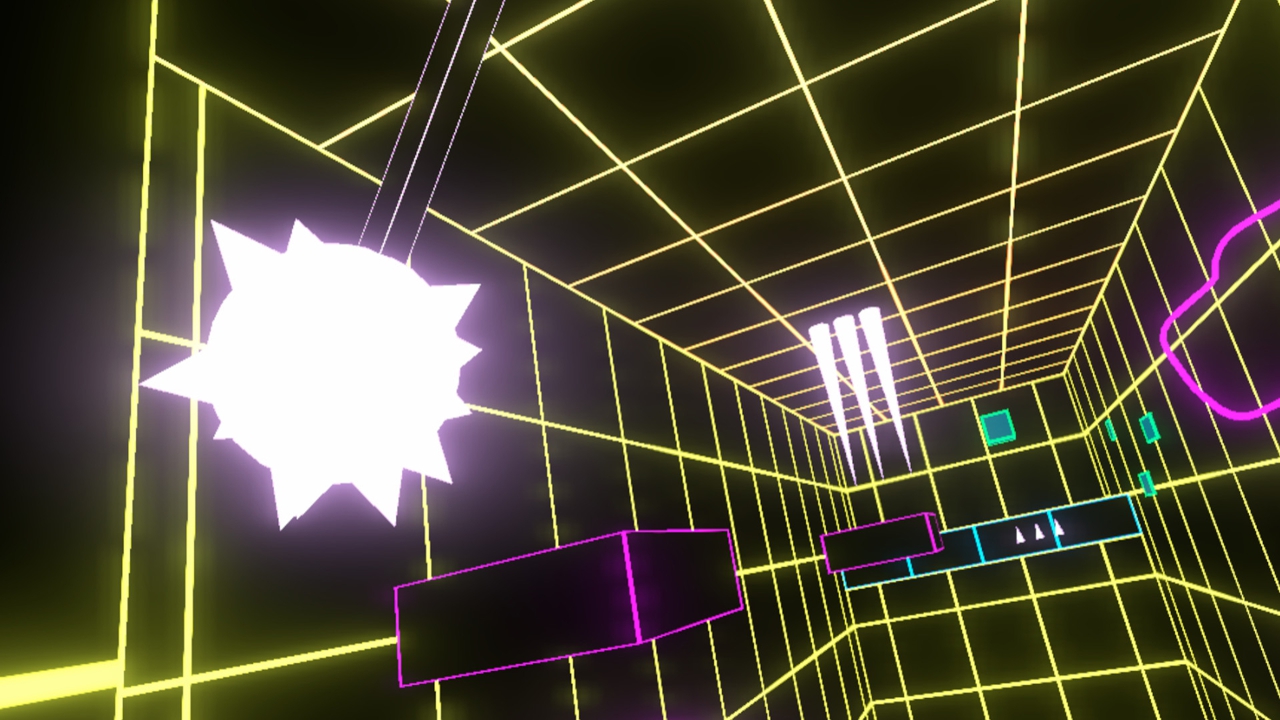 That is perhaps the best thing the game has going for it. While most games in the genre offer a time-trial /scoreboard for each level to provide replayability (and Escape the Grid VR is no exception) what they lack is a reason to press on beyond seeing what the layout of the next level is like. Having a story that unfolds alongside the constant addition of new mechanics adds a sense of progression which is sadly lacking from VR games as more and more wave shooters flood the platform.

The story sadly is going to be a bit difficult to follow. The voice acting, while upbeat and kind of charming, is overwhelmed by a combination of the strength of the actor’s accent and the digital distortion layers over the top of it to turn it into a ‘computer voice”. There is a moment when the dialogue is incomprehensible and while the dev plans to add subtitles, there are moments where many players will have no idea what they were just told to do.

At launch, this leads to many players simply hitting a dead end in the tutorial. The explanation of the controls couldn’t be understood and there was no way to get the instructions repeated. The developers have since added a more comprehensive tutorial with clear signage outlining each control method but at the time of this writing, subtitles have yet to be added to make the later dialogue clearer. 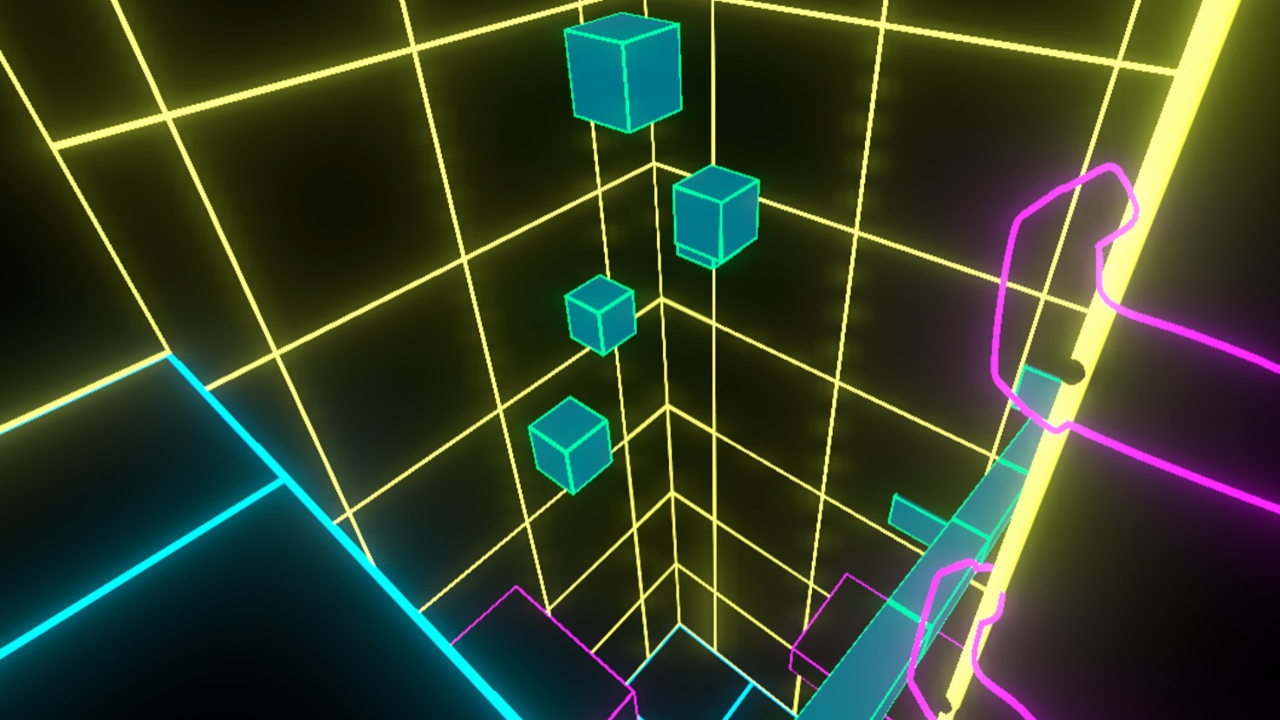 That said, the biggest point of frustration in the game is the collision physics for the player’s lower body. Platforming mechanics have been a hot topic recently and one of the things pointed out by developers is the way they need to fudge the landing collisions so players don’t feel cheated. Basically, making it easy to land on a ledge and harder to slip off than the visuals would indicate.

Unfortunately, Escape the Grid VR seems to suffer from the reverse. When trying to jump up onto blocks you will frequently stop and fall as your feet get stuck on the lip of the block on the way up and over. Meanwhile landing right on the edge of a platform will be a fleet victory as you proceed to slide right off. A problem exasperated by the natural inclination to look back to see how close to an edge you are or to look down over an edge. Since your position is based on the location of the headset, it effectively moves you closer to it and you slip and fall. 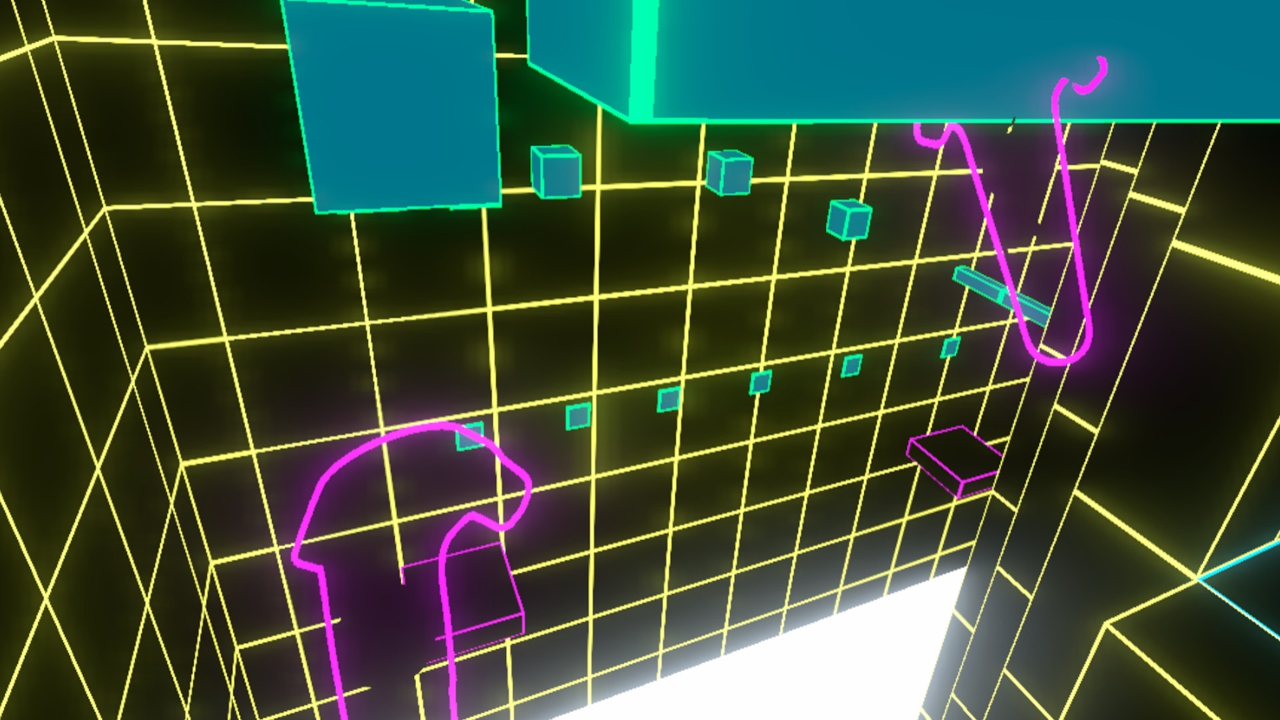 Thankfully, these appear to be things the developer is working on. The small team seems to have suffered from a lack of available focus testers and now that feedback is coming in after the release of the game, they are churning out quick updates to address player concerns. If that continues and they manage to get the more irritating issues resolved this could polish up into quite a gem of a title.

With the VR player-base being so much smaller and warier than the rest of the gaming market I worry that little ambitious projects like this one will fall by the wayside and be forgotten. But the devs seem passionate and genuinely keen to ensure their players have a positive experience. Make no mistake this is at the moment a niche title, but with continued development both easing the new player experience and improving the overall feel of the game and as the market grows and more people begin to seek out more challenging content, there is great potential for that niche to grow as the rough edges come off.

If you are relatively new to VR and are still acclimatising to all the different control schemes and various concepts then this is not a good place to start. Otherwise, given the games extremely reasonable pricing compared to other titles on the platform and the sizable chunk of content, it is an easy recommendation for anyone looking for something that will encourage them to push the envelope.