One part mental illness, two parts blind-sight through echolocation using a microphone, all while in Virtual Reality, Well yeah, Lets check THAT out!

Intro – “Death is no more than passing from one room into another.”

Business is best describes as creative rebranding, there haven’t been any new ideas in a very long time that do not stem or were influenced in some way. Most really great selling and successful products are just old ideas with a fresh take.

The gimmick is what sets products apart from their competitors and makes or breaks it. With phones it was loosing the dial pad and keyboard and using all glass large displays, made apple billions. Nike took hightop sneakers and made a memorable logo, used higher quality materials and added a pump that forces air into the heal, billions. Disney took old folk tales and made them into love-able cartoons, then ran out of ideas and started buying everything, but made it family friendly and reliably wholesome, BILLIONS.

Echolocation, it’s a Gimmick. its been in movies, like daredevil and in cartoons and comic books, its not a completely original idea, but using it in a horror game is a new take on an old genre. What we need to determine is whether or not it is a money maker, and product mover. Lets find out, shall we… 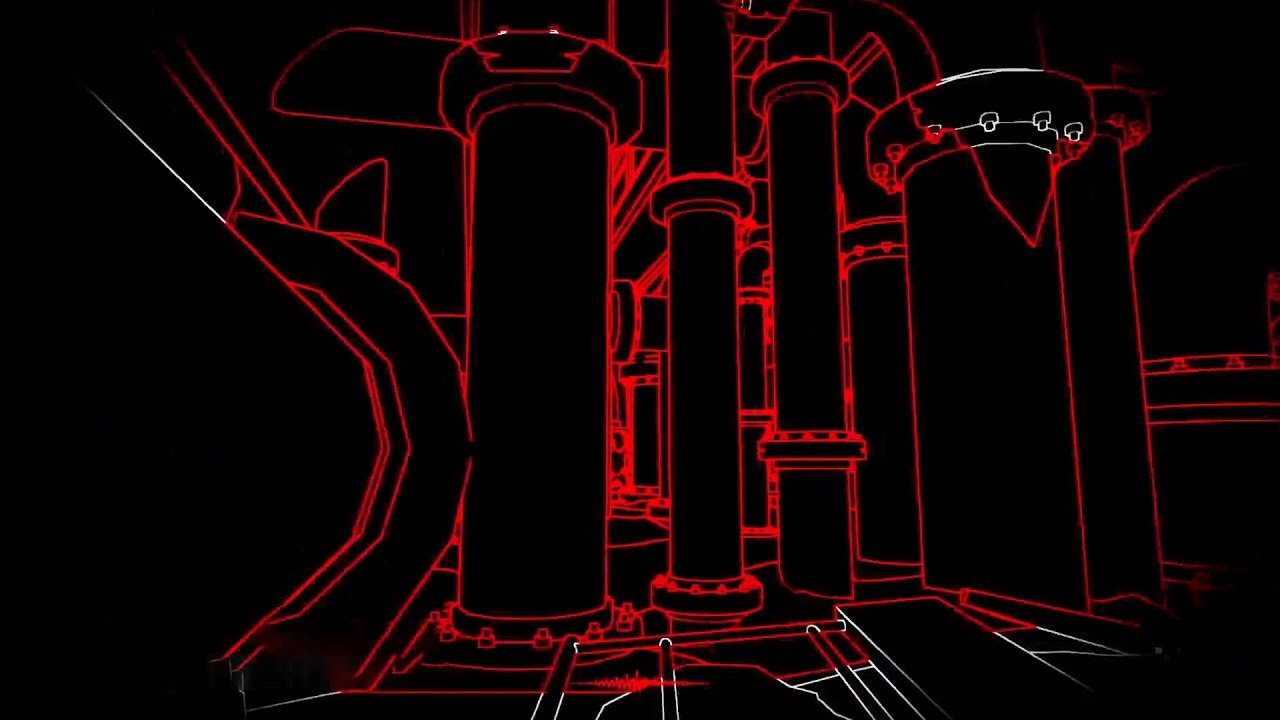 Visuals & Framerate – All that counts in life is intention.

Visuals in a game are very subjective and polarizing, of all the subject most often to divide a room when it comes to gamers, this is the one. Companies have dedicated decades to making game engines for others to use to make their games, Epic unreal 4, Crytek, Unity, the focus dynamically shifts from decade to decade, where photo-realism and extreme framerates is all it took to sell titles, to companies using extremely stylized art and gameplay to set themselves apart.

As time rages on the shift waxes and wanes from one to the other with the quality of both increasing slowly and steadily over time. Stifled is a game that has ok textures and OK performance(framerate) when textures are visible, but the stylized purely black environments that highlight the cellshaded edges based on the distance the sound of your real life voice makes, is stunning.

The monsters are not particularly detailed or even frightening on their own, but when you make a noise and the enemy shrieks back and the screen bleeds from white to red in the same audio cone around them, it is effective. Terrifying. Briefly (see gameplay) 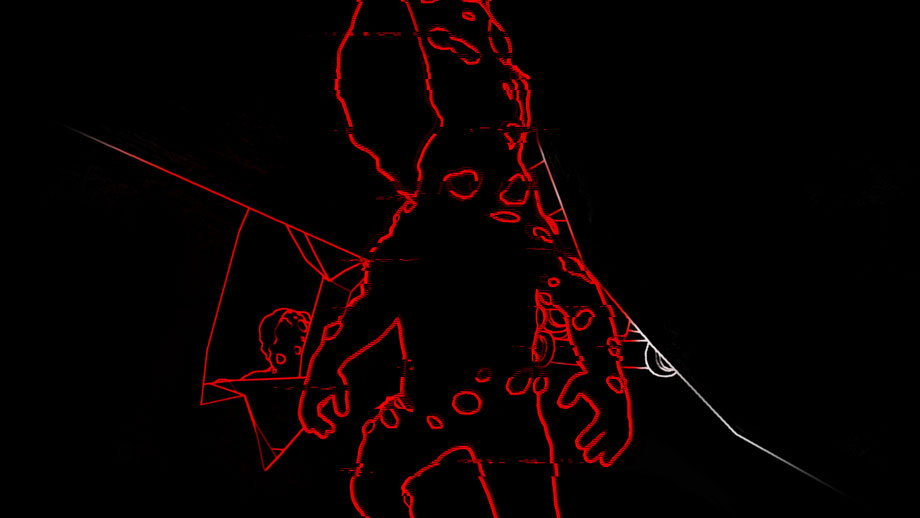 Lets be honest, sound is THE most important aspect of Stifled. The monsters react to it, you see though it, and the story is told, and character built, all from sound. It had better get this part right. Right?

It is with confidence I can say this is where the development team really applied the polish wheel, getting that chrome, mirror like gleam. The idea of using a mic to play a game, at first, was dubious. Belting out random noises to expand my field of view was a laughable idea on my initial intuition. However, when you cough and you see the sound light a path, disappear, then bounce of the wall at the end of the hall you will adjust your position on the premise. 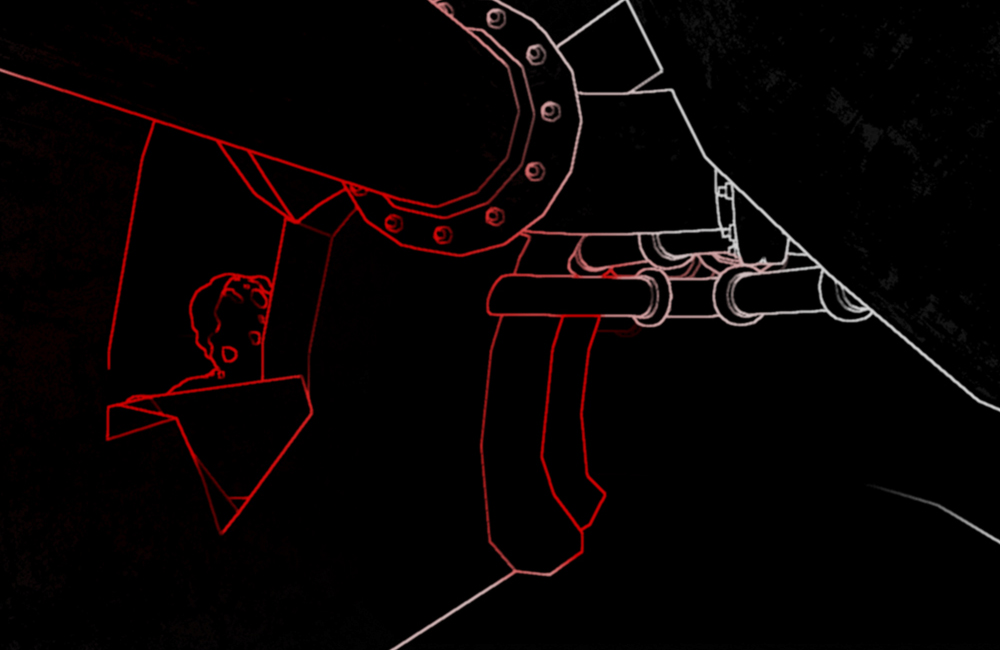 The story is about the mental break down from the loss of loved ones the main protagonist (you) endures, and you are forced to live his debilitating survivors guilt.
The arc unfolds from your point of view, which is broken, twisted, and disorienting. with bits in full color and appear to be memories tied to events that remind you of your loss.

When the full color scenes fade away and you become a blind and crippled man, The effect of echolocation is awe inspiring the first few hours. Waterfalls and leaky pipes provide an anchoring, continuously visible location from which you can find a branching paths. There are many types of environments from ones that feel like realistic physical locals, to full on hell-scapes with children in cages and dolls hanging from nooses by the hundreds. There is no lack of variety in things to be revealed by your voice.

As with most games though, developers cannot really make game mechanics that cannot be exploited, and ultimately the is the biggest issue with Stifled’s differentiator. Once you find the distance it is safe to make the noises and find that throwing debris at a staircase to make the mob chase it out of range the “horror” part of the game is nullified, and it becomes more of a light puzzle solver, which it isn’t very good at, unfortunately.

The “Monsters” are not the traditional assortment of ghoulish creatures per se, there is a bit of a psychological design to what really makes them “scary”. Giant tumor covered toddlers wailing and gibbering while they blindly mosey about until you make your presence known, little girls with terrifying laughter, or my favorite one to hate; Invisible energy creatures that cannot be seen until you anger them, then they twitch and pop in and out of existence getting closer with each reappearance.

Using the Mic to reveal the world is actually fun and has an immersive effect. Which is ironic, because for some unfathomable reason they chose to make the VR aspect of their VR game, not have room-scale or tracked controllers. This is the absolute, hands down, worst idea anyone had in the development cycle for this game. had it come with those features I would have given the game an SAVE, but as they are missing I cannot… 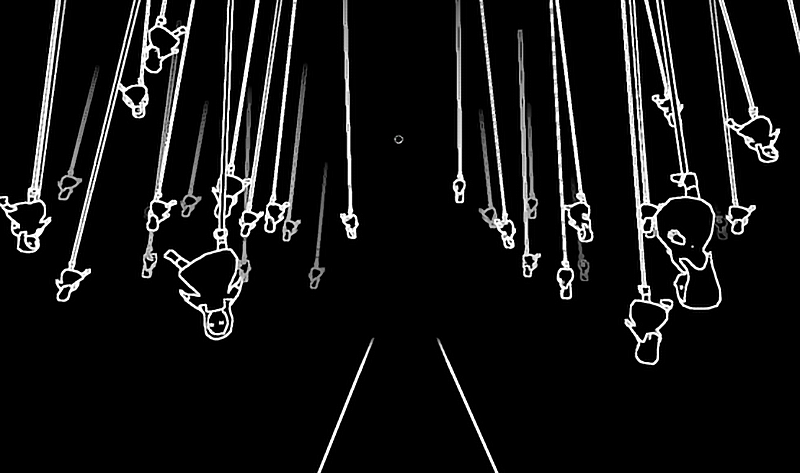 Virtual Reality & Controls – “Maybe this world is another planet’s hell.”

VR Sickness is real, and for the people it affects, an absolute deal-breaker. This title was nearly passed on to another SoQ reviewer due to VR sickness kicking in just under 15 minutes and leaving me ill for 2 hours+ Even with the “comfort settings” enabled. My game library is starting to skew more heavily toward VR than normal games, I play almost entirely in VR for the most part now, and have had a Vive Since the Day it launched. I am not a VR Noob.

The game is very enjoyable in 2d mode and it feels like the team chose a wider audience over quality VR options and really murdered the option to play in VR, at least for me. VR in this game feels very “tacked on” and playing seated with a gamepad is so Oculus and two years ago, I mean even oculus has shifted to roomscale with multiple trackers and touch controllers.

I cannot stress enough how much this disappointed me, this was a VR game of the year contender for me before having experienced it for myself. If you have Ironclad VR legs and stomach, maybe the VR in this game is for you, but I cannot recommend this be played in VR with good conscience. 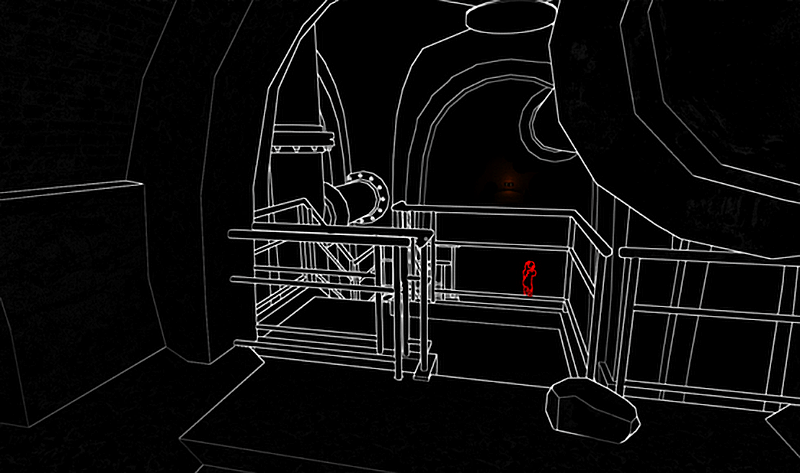 Verdict – “The journey is the thing.”

Stylish and visually appealing title with stellar sound design and interesting plot, exactly what the VR market needed right now… too bad this top five VR game of 2018 tripped and fell to the middle of the pack all because of a seated, gamepad driven, tacked on VR experience.

If you love horror games and are looking for a fun title with a neat take on the genre, and you do not have, or would not like to play it in VR, then I would recommend this to you. Otherwise, I cannot.

Did you know all the quotes from the famous, brave, brilliant, and visually challenged people in the headers?