Wonder Boy: The Dragon’s Trap : Why a Game Save File from ’89 Warrants Playing Today.

Out of all the words to best describe WonderBoy: The Dragon’s Trap, the one that comes to mind to best describe the experience is déjà vu. A feeling not necessarily related to nostalgic memories but a strangeness that cannot be explained from the clash of the familiar with the new.

Except in my case, this feeling can be explained because I had played the original, WonderBoy 3, too young to understand basic game design. Until I had recently stumbled across this game, vaguely remembering that dragon curling animation, WonderBoy 3 has always remained a mystery to my younger self. It’s one of those early game experiences where my mind made every game appear more daunting if it wasn’t completed in a single sitting. In 2018, however, my older self can only be confused why my younger self found the original so difficult, yet the magic and awe behind WonderBoy resonates more strongly now that I can appreciate its new artistry and its many, many old flaws.

What Wonders a Fresh Coat of Paint Can Accomplish

Whether it’s small kindlings of nostalgia or an appreciation of classic games, The Dragon’s Trap is a game that manages to mitigate lacking substance over its style. It is a mechanically subpar platformer with game design stuck in the ‘80s let alone comparable to any Metroidvanias. However, what makes up for its dated gameplay is how much attention to detail is given in its audio and its visuals not simply to cash-in on its nostalgia but to provide that same passion from its new creators, LizardCube. (As a side note, this may also be the best projects DotEmu has ever endorsed if you ever played one of their SNK “remakes” available on Steam.)

Art is not something I tend to critique because it’s heavily subjective in its value besides the criticisms of its composition. In the case of The Dragon’s Trap, however, it would be a grave disservice if I did not illustrate how much the visuals give it a newfound charm. In many ways, these additions are masquerading the game’s simplicity because it provides enough stimulation to fool the brain into thinking there is more going behind every corner. 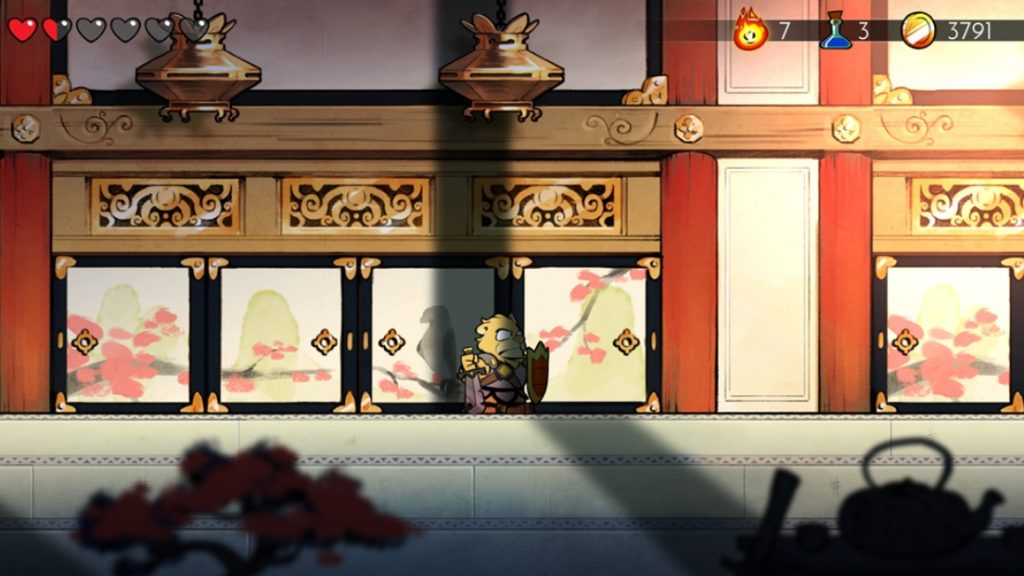 For starters, let’s talk about the in-game usage of lighting. Similar to games like Abe’s Odyssey, there is an artistic touch to the backgrounds to create more movement than what is really happening. This is evident especially in the Japanese house as the lighting will create different shadows on enemies and the player as the background shifts. Throughout the desert treks this lighting technique is used in abundance as the player scales the pyramid or goes down below into the crypts, or the dark rooms below the house enclose the player with enough light only to see enemies nearby to increase the tension compared to how bright the player and enemies appear in the retro-version. 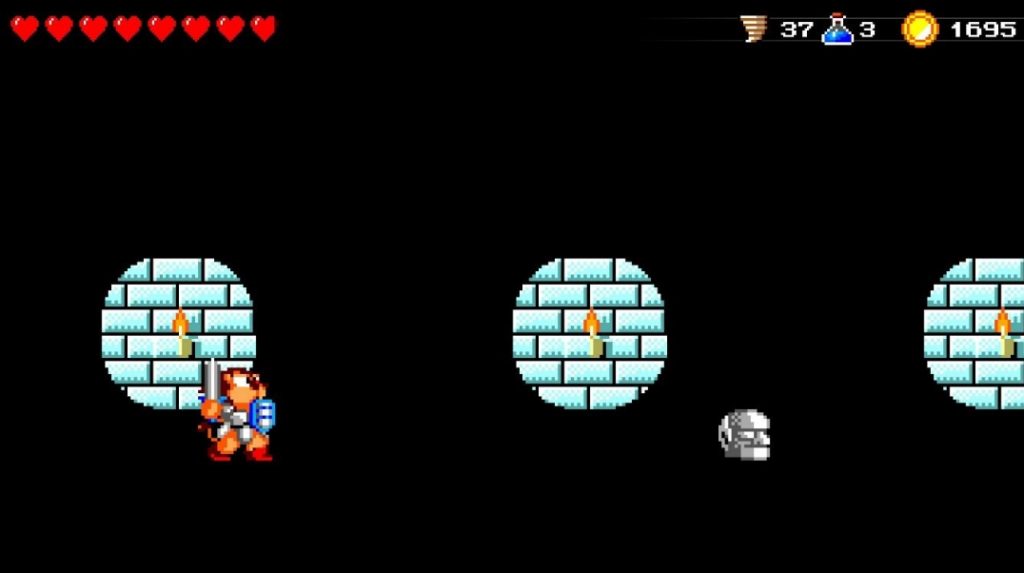 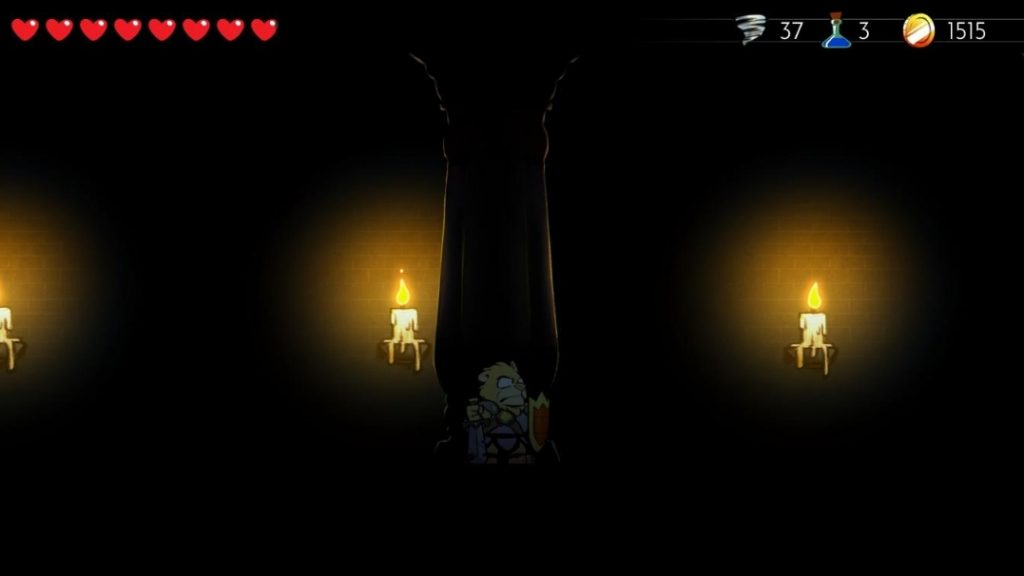 Second, the foreground and background movement create a more dynamic feeling to the game as objects will shift behind one another to indicate movement with the player. Pillars changing with orientation to the player; statutes following you; landmarks moving with you. These elements are not simply eye-candy as they can help players navigate levels more clearly than the original while adding to the journey, especially underwater. Another in-game benefit are the telegraphs in combat to create a smoother experience. 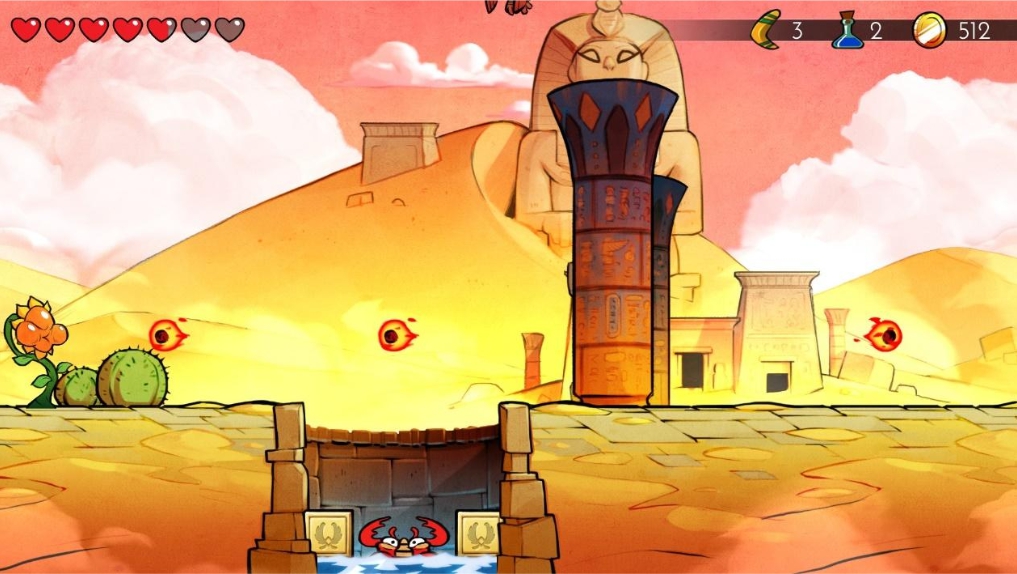 Again, none of these elements excuse WonderBoy’s aging problems or make the gameplay better from its visuals alone; however, these small touches in addition with the musical adaptations from jazz to rock are all additions that could have been overlooked. (One could argue the simplistic gameplay makes these smaller touches stand out more because they are distractions.) Instead, this level of polish adds a level of charm hard to get right in nostalgic callbacks and it may be the one time where the rose-tinted goggles should come packed with the game.

What Was Timeless May Not Last Forever

There are some who believe great gameplay can be timeless; unfortunately, The Dragon’s Trap is perhaps indicative not all games can withstand the test of time. The combat of primary attacks and of sub-weapons in the vein of Castlevania are adequate basics, but there is a bigger problem underlying the game than simplistic controls. In fact, it may be the most technically impressive feature that may interest anyone who wants to play The Dragon’s Trap, the Retro/Modern filters. 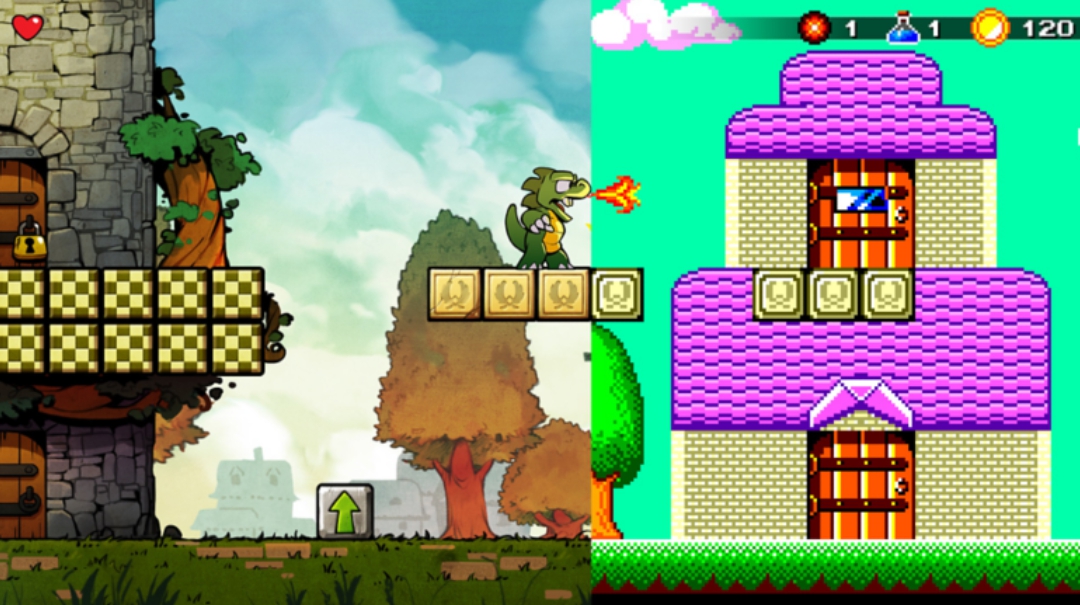 From this one image, you can already see the problem. In order to make the entire game compatible with the Modern/Retro audio and visual filters, the level design is a one-to-one recreation from ’89. This may not seem like a big issue if you have played Halo 1 or 2 Anniversary with the same feature, but if you have tried making a level in Super Mario Maker you know Mario has made significant changes across 20+ years. Many sections of Wonder Boy do feature enjoyable platforming or lite Metroidvania elements; however, there are many instances—especially evident in the Retro mode—where you are walking down long hallways with enemies. 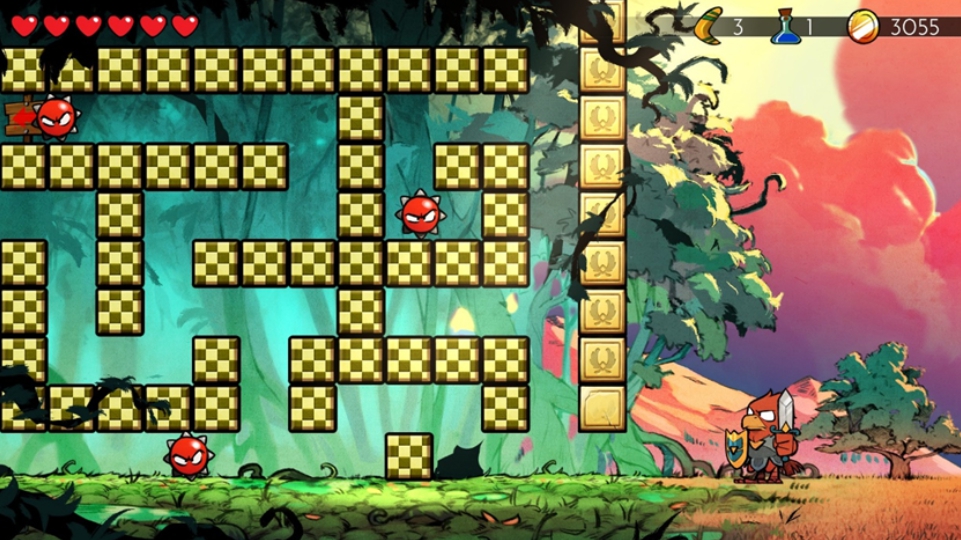 This limitation of the level-design also extends to other portions of the game: Transformations are limited to specific rooms. Puzzles are untouched. Areas can only be accessible in a set progression of unlocks. The original’s stat progression of items remain grindy , and the farming technique for gold and potions is the same solution to many difficulty spikes. Secrets that would be available in Nintendo Power magazines remain vague as ever in 2018. Previous technical issues such as the game’s hitboxes and stiffness remain apparent, yet the smoother animations help mitigate it negatively affecting the controls. In short, and not to sound harsh, WonderBoy may be the greatest emulation project ever created that does its damnedest to make you forget you are essentially playing the ’89 version.

Perhaps it was naïve to think the gameplay would be altered beyond added polish. With hundreds of other inspirations available, however, you would think LizardCube would innovate WonderBoy for the modern age such as Shantae’s transformations and Shovel Knight’s inspired, not recreated, nostalgia and its focus on modern level-design. This is why I find it difficult to praise this game as much as these other classics because it ultimately comes down to a passion project with nothing learned from the past except emulating it. The game cannot help but feel antiquated despite how much artistry was involved to keep the charade going long enough to complete it. Afterwards, it’s hard to say whether or not that is compliment.

A Game’s a Game No Matter How Simple

Coming back to the beginning, it’s evident that if there is anyone who would appreciate this kind of game it would have been my younger self, especially with the visual assistance for navigation. This isn’t a defense that games intended for kids should have lower standards; it’s a recommendation that this game would appeal to strangers to games or to people who enjoy eye-candy over challenge. WonderBoy offers a solid three to four hours if you take your time to explore without any incentives for replay value, yet it never feels bloated. Like a good Dr. Seuss book or a piece of a candy, a small moment of sweetness now and then can be enjoyed for what it offers rather than what you could desire.

*Newcomers to games will appreciate the remake

*Attention to detail through sound and audio

This game should be rated a Save for Later when it is on sale or bundled someday.