REVIEW: Adventures On The Polluted Islands

What if Link was a crab?

In Adventures on the Polluted Islands, a helicopter dumped toxic waste on the islands, giving life to mutated lifeforms. As a crab, help your kin and travel from island to island, exploring and investigating strange beasts and mystical places. You can fight enemies with a boomerang (don’t ask me why) and carry items around in order to solve adventure quests (the usual find X for Y). You can travel to new islands with a raft (the crab cannot go into the water, don’t ask me why).

The game is viewed from a top-down perspective, and I must admit that I found its chunky bits of pixels all very endearing. The color palette is pitch perfect, evoking tropical jungles and Amazonian ruins. When confronted with creepy locations, the lights are dimmed and the backgrounds become messy and creepy. A lot of care went into the details of the islands, and the many little things to interact with such as seashells or coconuts. 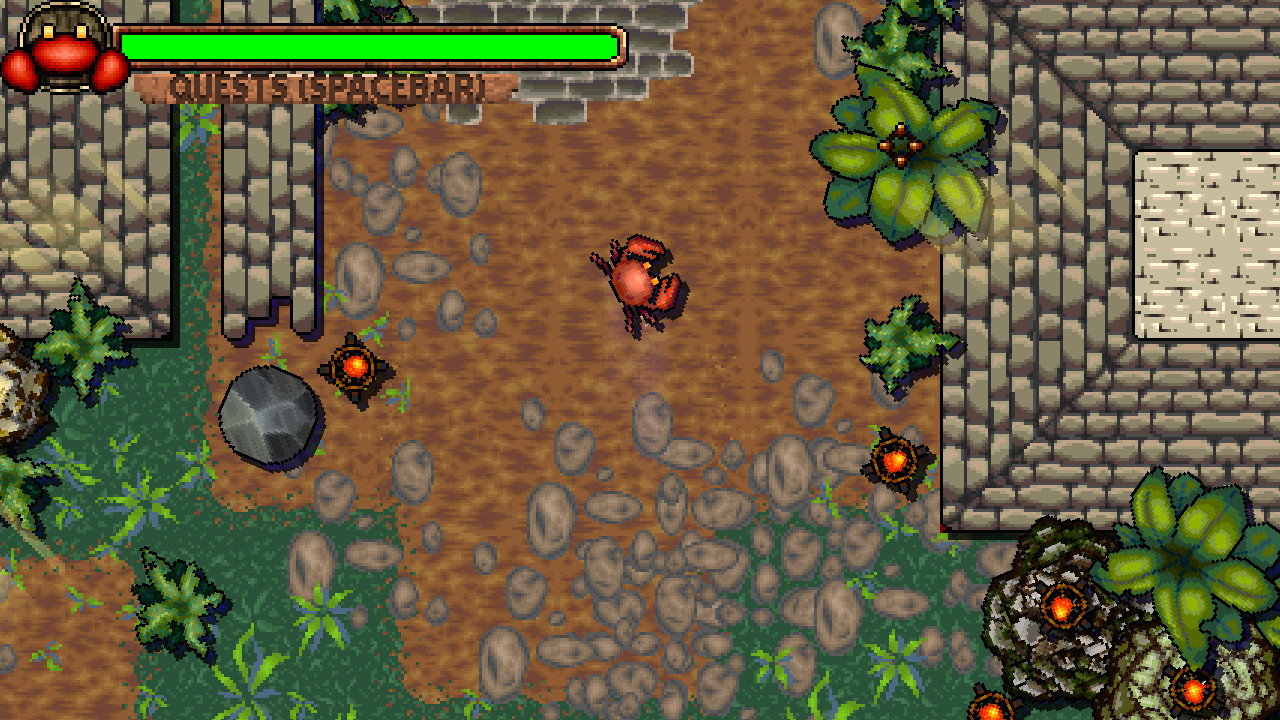 Coconuts are the first source of health. Interestingly, they need to get knocked from a tree then smashed against rocks before they can heal, which makes regeneration a whole interactive endeavor that can be done anytime but not too easily. Only one item can be carried at a time, so it’s not possible to stock up on coconuts and throw them all at once. Later, campfires instantly heal. What do you need to heal yourself for? 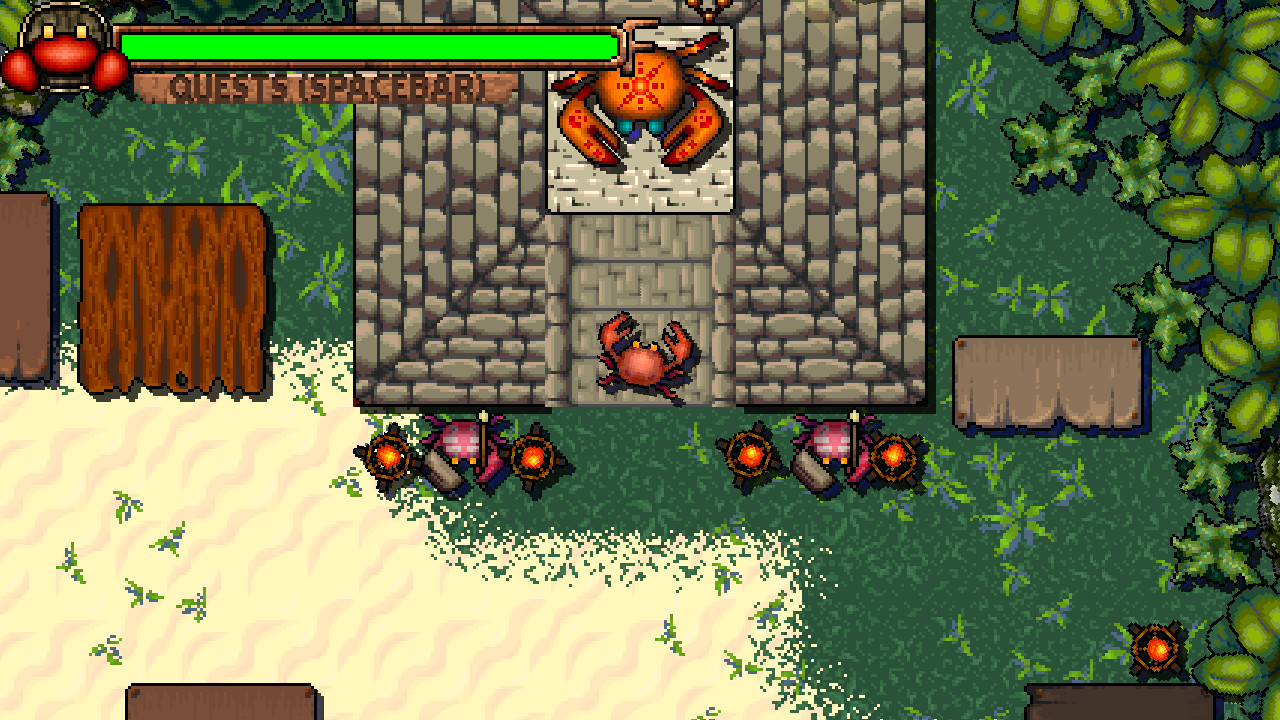 There are a lot of constantly respawning enemy critters that are dispatched quite easily with the boomerang. Occasionally, there are boss fights or traps (dart traps or a boulder, Indiana Jones-style). The enemies themselves are not a big threat, but they leave a puddle of toxic waste in their wake. Fighting them does not break the pace of the game and adds a little layer of anticipation as our crab might have to kill them according to a certain trajectory or be forced to wait for the chemicals to evaporate. 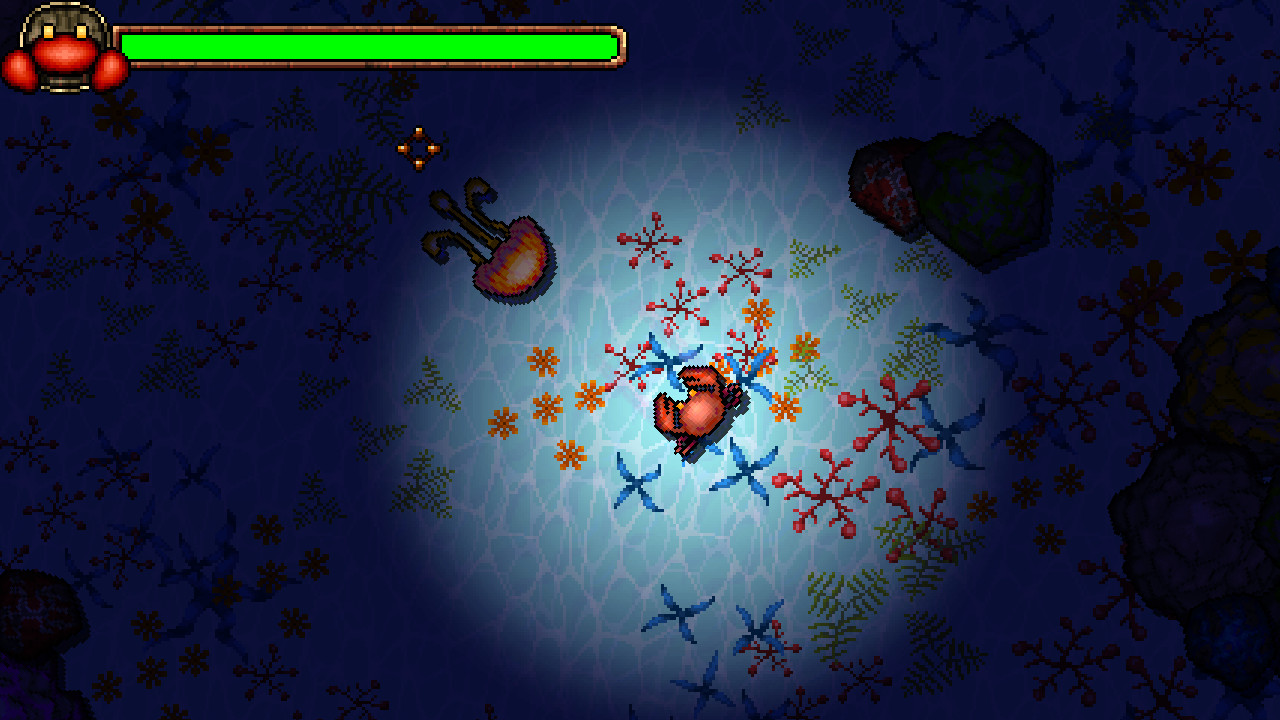 Controls are fairly simple but cannot be rebound. WASD to directly control the crab, left click of the mouse to attack with the boomerang, right click to throw an item that was picked up, and F to talk to other island dwellers. Problem is, the crab is not known to be a very fast creature, and here the speed can be grating. 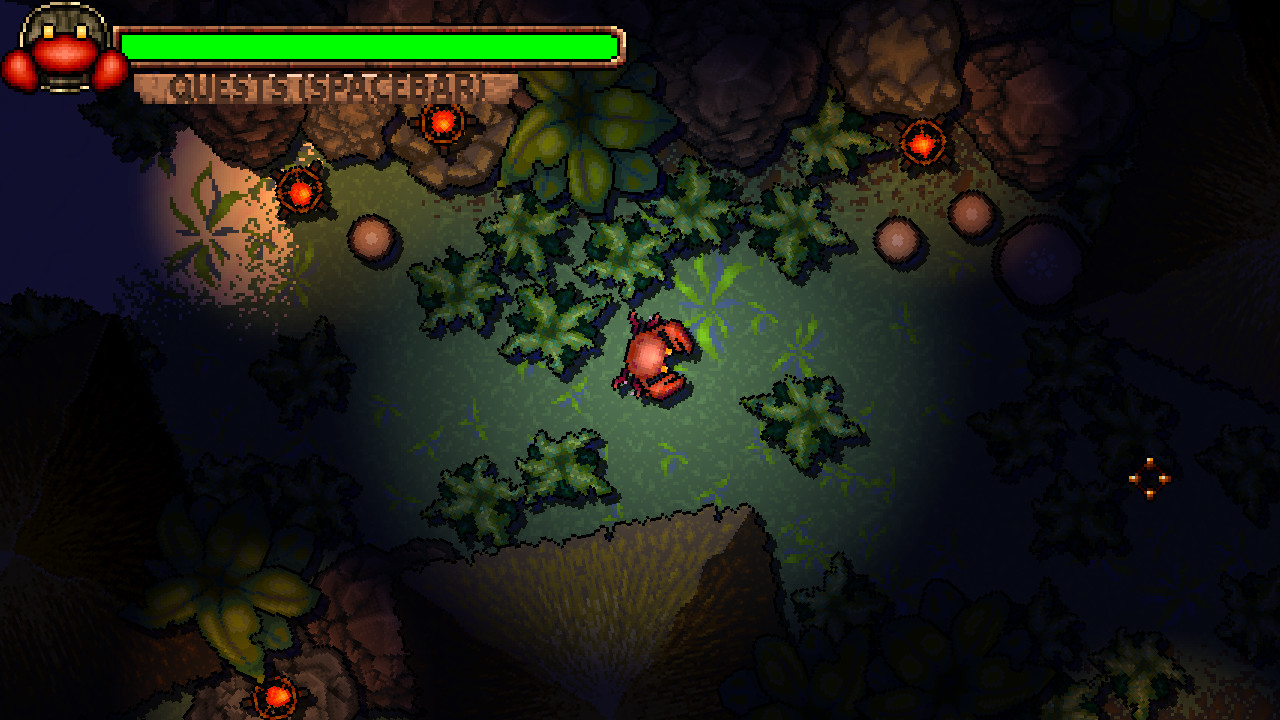 This is especially apparent when it comes to a lot of FedEx quests and backtracking from places that are several screens from each other. Or when you randomly threw an important item in the trees and need to find it again. While Adventures On The Polluted Islands has many locations (each time a new island) and different sorts of trials, so much walking around invariably made me frustrated with the game. I am not a very patient person, and this is one of the reasons why I do not often play RPGs. I am not saying that this game is bad, just that more self-contained puzzles would have managed to catch my interest for longer. Basically, if you want a rough idea, Adventures On The Polluted Island is like a simplified old-school Zelda, with less emphasis on puzzles and combat, and instead, there is a focus on exploration. It’s not a sprawling map, but rather a journey from one location to another in a linear fashion. 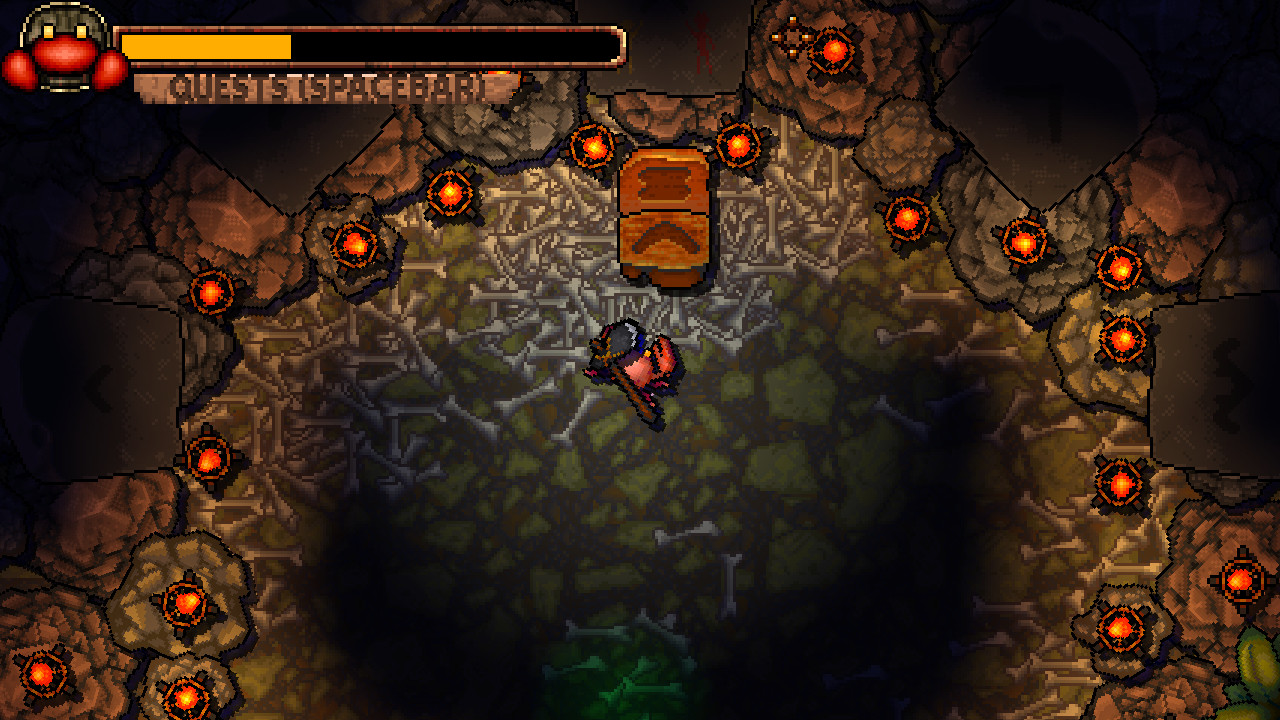 The dialogs are not very well translated into English, but they are understandable. The story itself did not particularly find me reacting passionately, but the setting and the characters were original and everything was titillating my wanderlust. My only regret was that it was sometimes confusing as to what the game was expecting of me, and it led to more time wasted backtracking around the place or playing around with items that are just there for decoration. 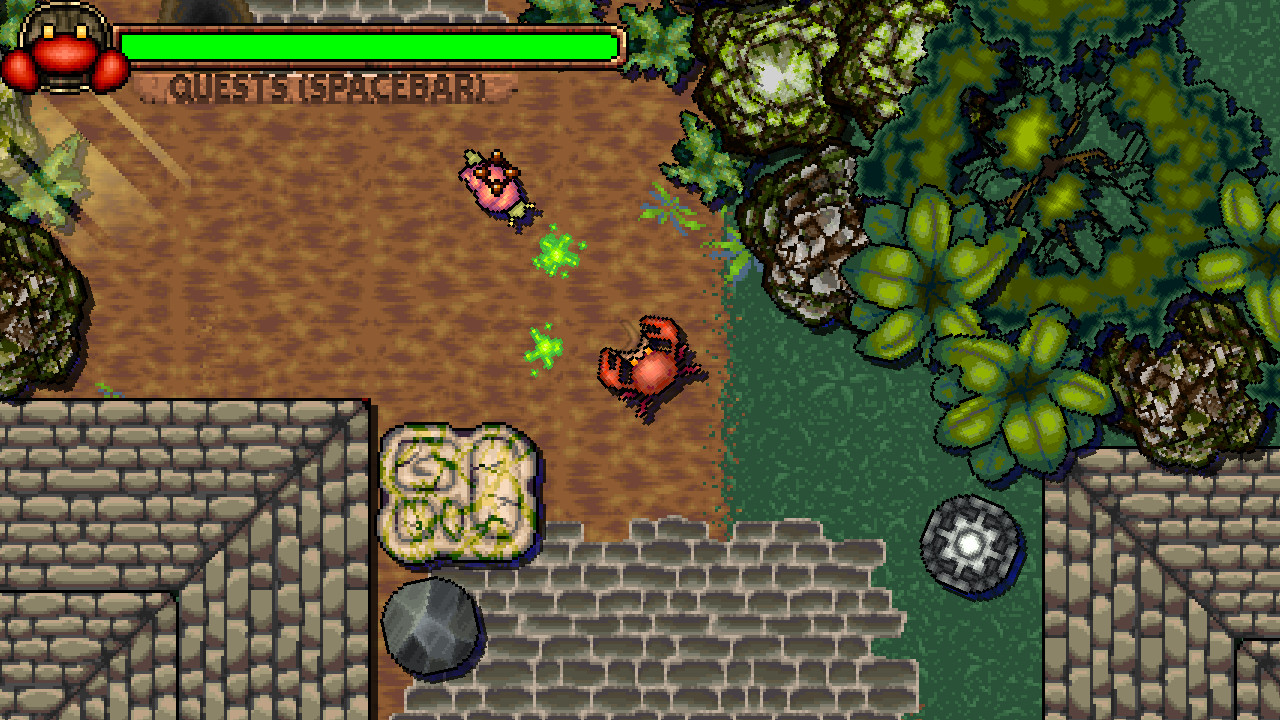 Adventures on the Polluted Island is rough around the edges, but it’s surprisingly decent for its cheap price. Expect an RPG focused on linear exploration with a crab instead of Link from Zelda, and small quests with lots of backtracking. I think that its mystery-filled universe would be a perfect fit for a kid, or someone nostalgic of top-down 2D games who does not want convoluted systems or complicated combat and can stomach backtracking.