The game world and idea of Worlds Adrift are wonderful, but the implementation is disappointing.

World’s Adrift is a “community-crafted” MMO game. While it’s developed and published by indie developers, Bossa Studios, a lot of the islands that make up the game world have apparently been created by players. Some of them are really rather nice, too.

The game doesn’t provide you with an introduction or background. After creating your character and selecting a server, you spawn inside a weird stone revival chamber. There’s a patterned wall that you can climb, which then leads to a short stone ledge overlooking what appears to be an endless drop into the clouds below, and a number of floating islands at various distances from you.

From the get-go Worlds Adrift oozes peace and tranquillity. From the lovely lush, green ruin-spotted islands to the wonderful calm and melodic title music, and the simple, but good-looking character models, it reminded me a lot of Make Sail and put me in a meditative, peaceful state for exploring the game. It really does look very beautiful and makes the world seem interesting and open for exploration. I really wanted to see what was out there. 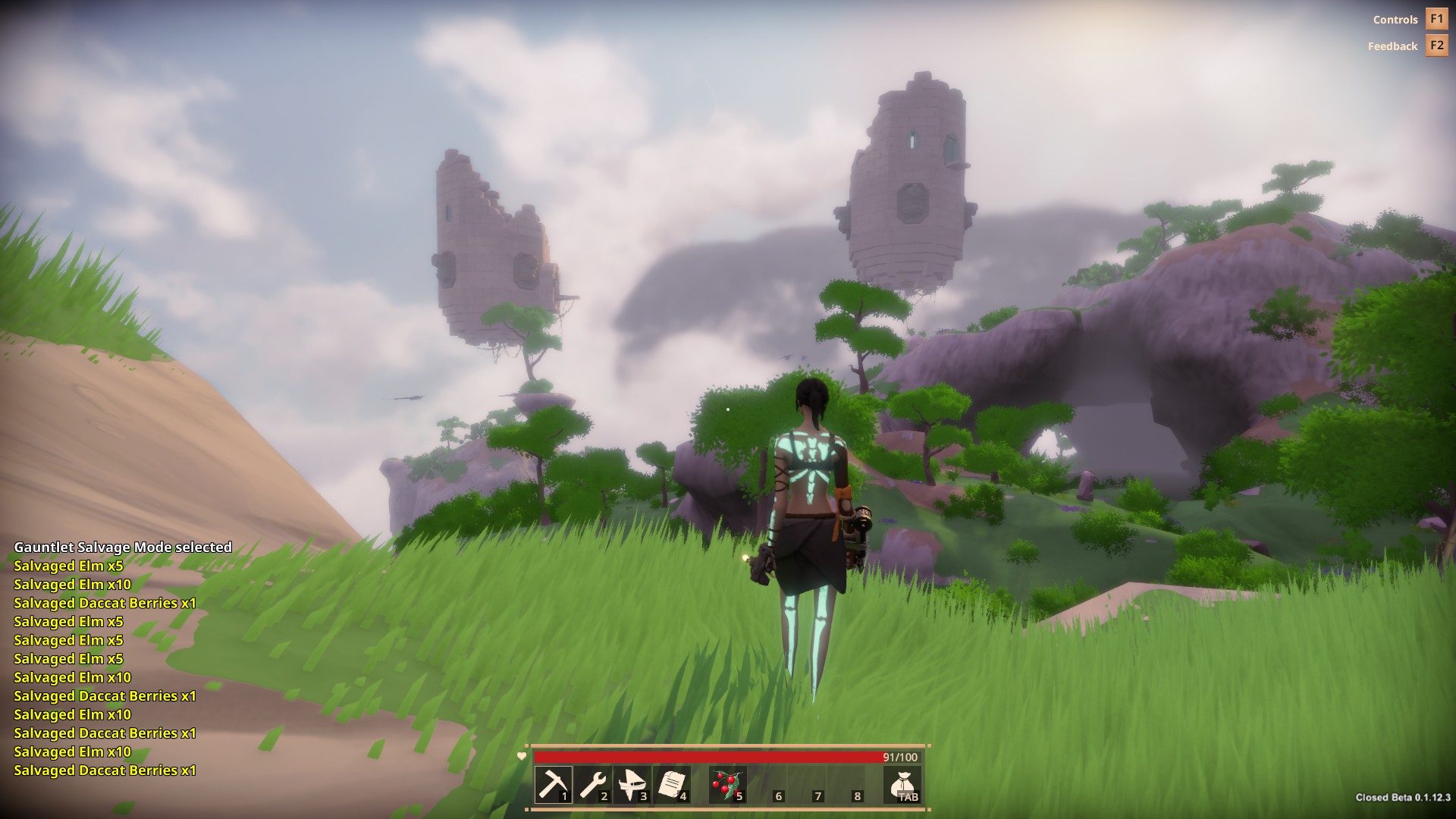 Character creation is nice, but there are nowhere near enough customisation options. You can choose to be male or female, with a handful of face types/shapes for each, a few clothing options, skin colour, and a relatively small number of hair and other feature colour options as well. While the characters look nice and reasonably personable, they all end up looking basically the same, which isn’t great for a game that sells itself as massively multiplayer. Oh, and your clothing colour selections are ignored when you’re in your underwear. The game is played from a freely rotating third-person camera at a fixed distance from your character. This makes it hard to see sometimes, especially when building or collecting resources.

Scenery is really nice, though from what little I’ve seen a lot of it does look the same. You’ll see the same tree or rock formation over and over even on a small starting island. There are some wild flying creatures that inhabit the world, and these are interesting, but look rather silly when they attack. Character animations are pretty terrible, too, looking very wooden and often out of place (especially climbing or knockdown), and don’t seem to be blended well. Some of them take too long before returning control to the player, too. Some clipping issues are also present.

The UI is confusing and hard to learn; it’s cryptic, bordering on unusable in some cases, and this is AFTER improvements at the start of this month. I hate having to go to external sources to learn how to play a game, but I had to here since the information screens don’t do a sufficient job and the game doesn’t offer any other help. There’s some pretty ugly wording in some of the descriptions, too. 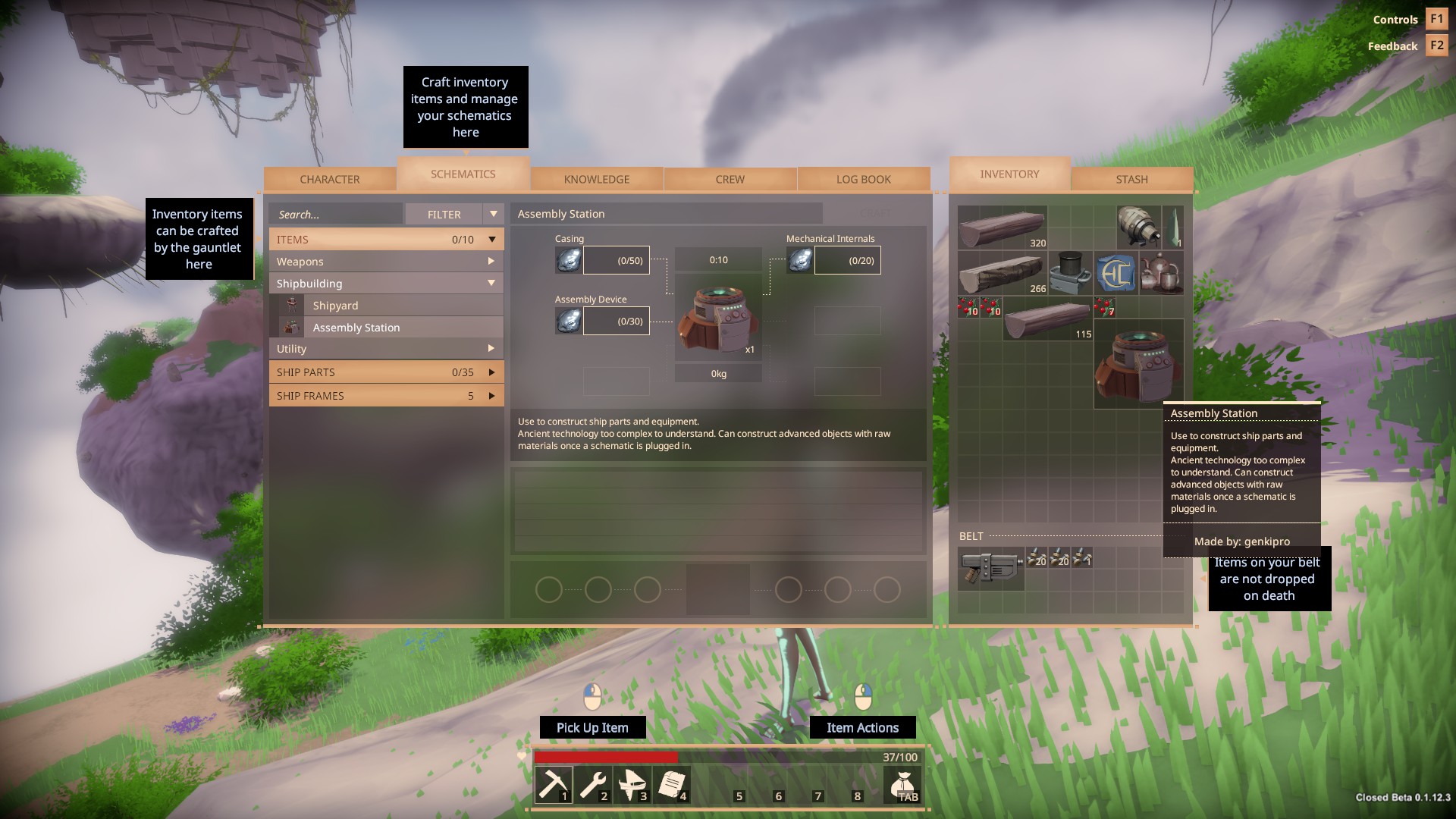 Sound effects are relatively few in number, but those that are here are well made and appropriate. As I mentioned, the music is beautiful and fits the world atmosphere really well, though it’s completely at odds with the multi-player gameplay. There are no voices.

There are a few graphics options to optimise performance. I encountered some major freezes on my GTX1070, but I think the cause was network-based rather than graphical. 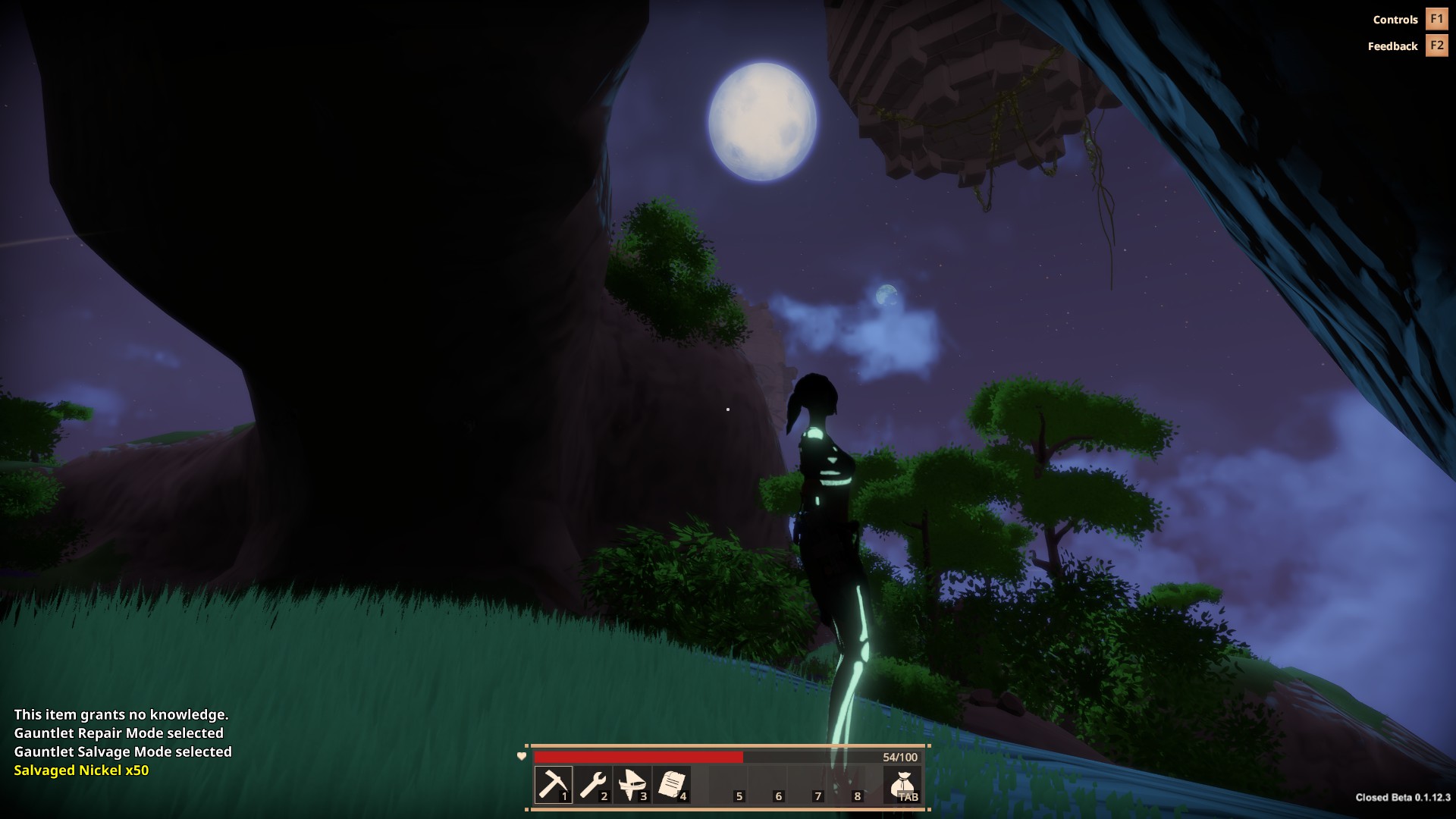 A couple of pre-gameplay issues annoyed me. First was having to visit a website to create an account that I’ll only ever use in game; why not do that in game? Second was only having two servers: EU West and US East. That’s a hard choice from where I am, and in the end I did have lag on both servers.

The game gives you no idea what’s going on when you’re first starting out. There’s no introduction, and no tutorial beyond a few brief text screens that tell you to gather knowledge and suggest you build an airship, but don’t tell you how. You have a literal handful of strange technological items: a gauntlet that has multiple modes that aren’t too hard to work out, but the scanner mode repeatedly tells you you’ve scanned things that you haven’t and the resource gatherer only works sometimes. 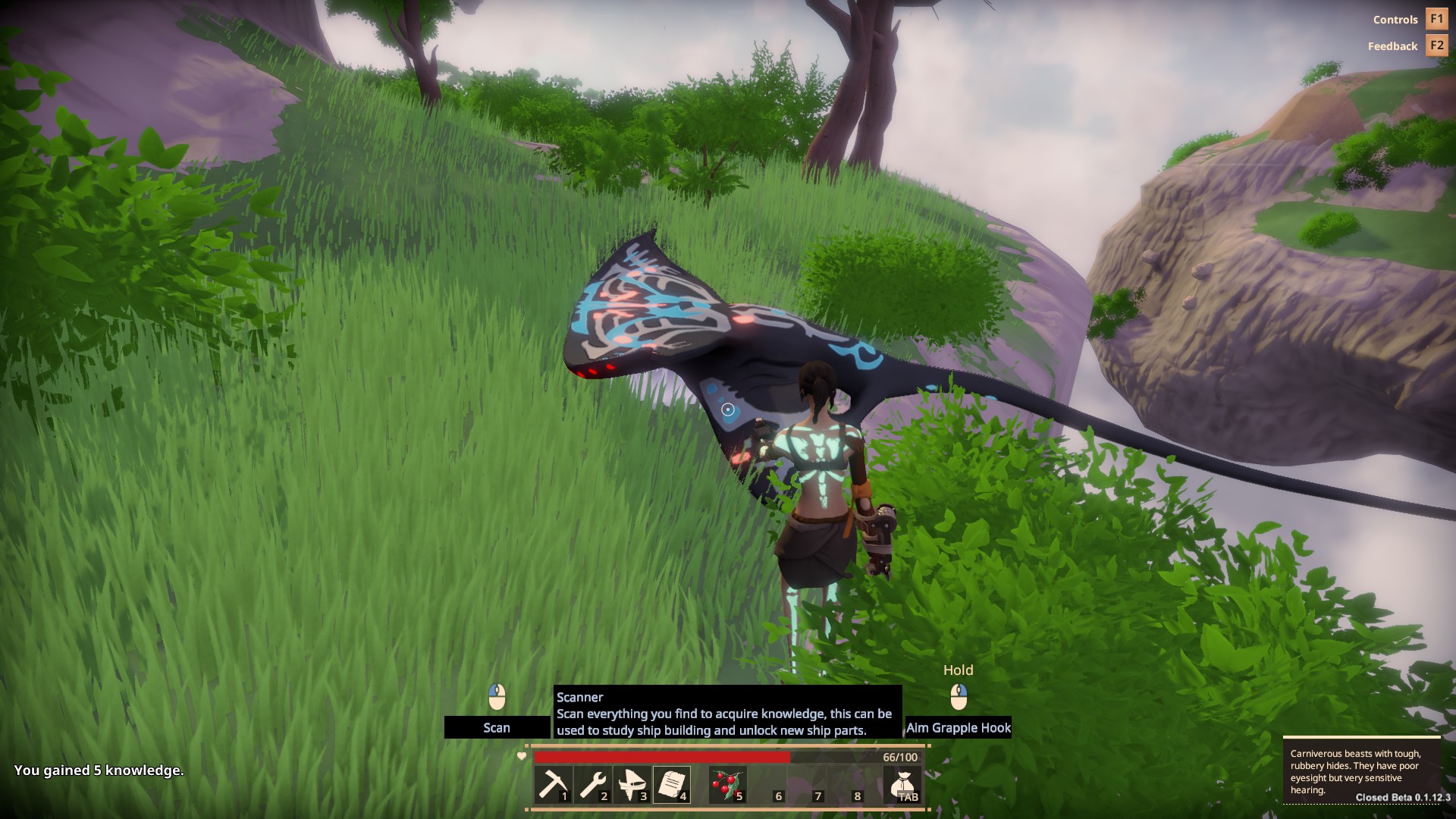 You can run, jump, and climb (really slowly), but your main method of movement is your grappling hook. This is hard to use at first, but after a couple of hours I had a reasonably good handle on it. The jump/boost move is unreliable, though, only working sometimes and even then at weird angles on occasion. Still, grappling around is a nice mechanic and I found it quite fun.

I spent a couple of hours trying to work out the controls and gathering resources. This took a lot longer than it should have because the whole game is PVP, with NO SAFE ZONES and an inventory that you lose when you die. That’s right; anyone who feels like it can come along and just continually wipe you out and take what pitiful resources you manage to gather as a newbie. And they do! I met three griefers in a period of less than an hour’s play, when all I wanted to do was work out what I was doing. This lack of a safe starting zone is inexcusable for a game with such arcane and confusing mechanics and interfaces. 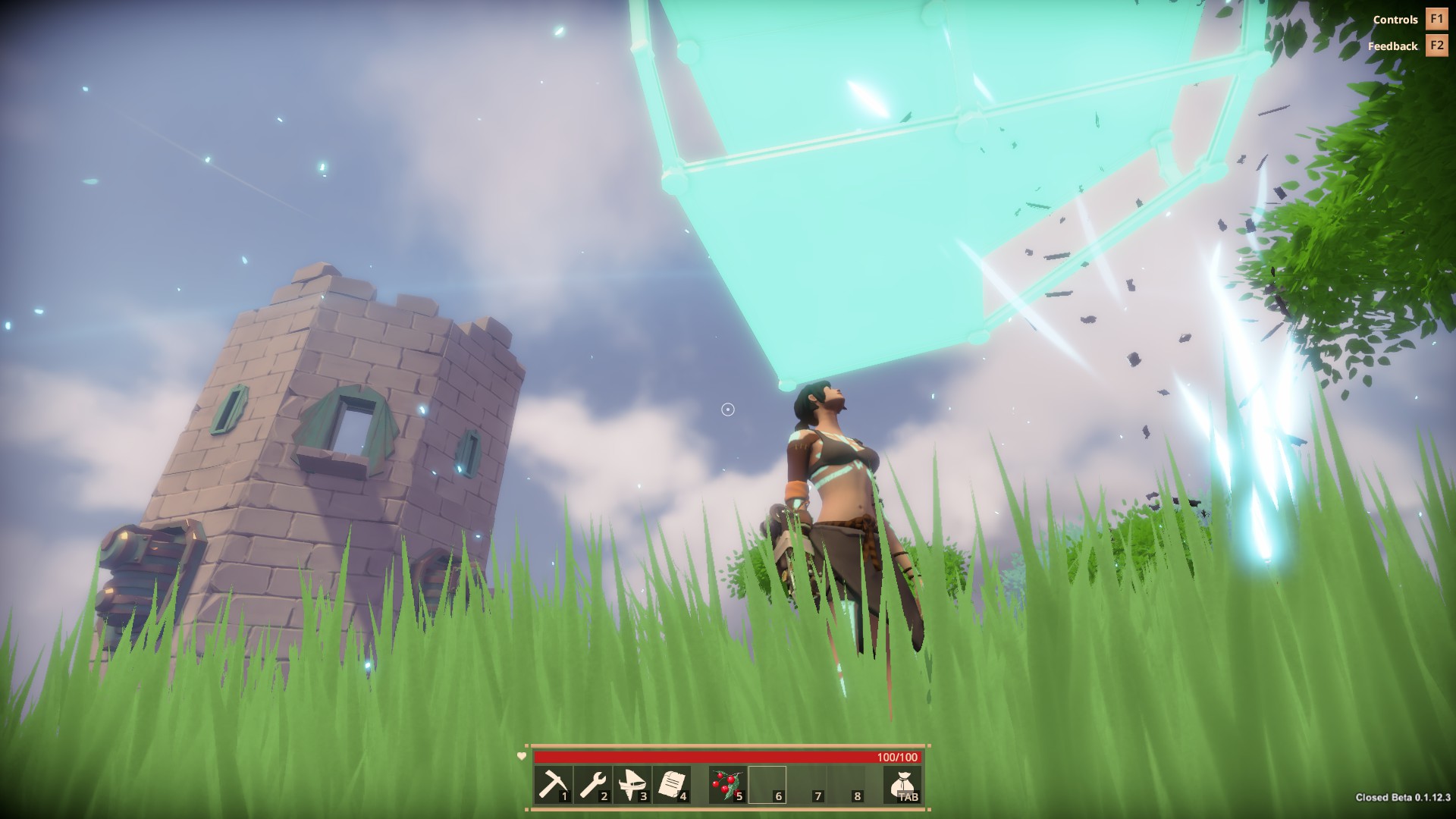 So eventually I managed to build a ship, but I had to use external sources to work out how. (ProTip: your grapple can attach to the dome around your shipyard.) Then I had to work out how to control it, and what the extra bits I could stick onto it actually did. And then I got killed again and lost all my stuff, and my shipyard, and … that was enough for me.

Apart from the core problems of most PVP-only games — griefers and a dearth of interesting content — and the other issues already mentioned, there are countless other problems in the game as well. I’m sure some of these will be fixed as the game runs the Early Access gauntlet, but at the moment it’s not much fun. 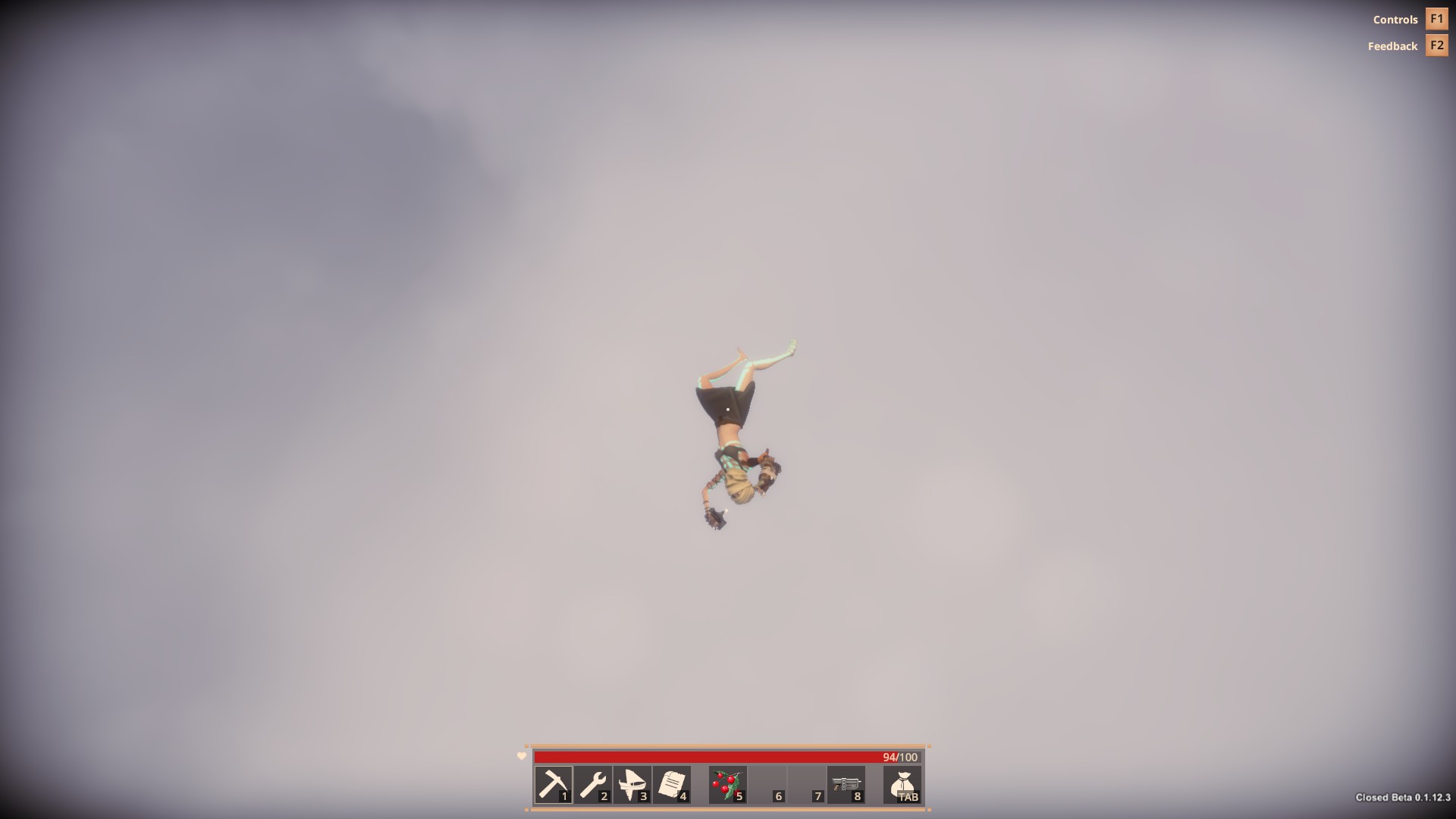 I don’t play MMO games much anymore. I don’t typically have the free time to do what is required for them and often I get bored by the grind. As an old man I don’t have the patience for many of the “social” aspects, either. But Worlds Adrift interested me enough to take a look. And then reminded me why I don’t play PVP MMO games anymore.

It’s a game of discovery: discovering where you are, what to do, and how everything works. And that is sort-of cool. But the griefers are already numerous and persistent, turning discovery into frustration. Controls and hit detection are inconsistent, and losing your inventory when you die is the last nail in this very disappointing coffin. A successful start is down to dumb luck: are you close enough to an asshat for them to notice you? I don’t have the time or patience to harvest resources so someone much more powerful than me can steal them off my corpse while I’m trying to learn how to play.

So at the moment I can’t recommend Worlds Adrift to anyone who’s not a masochist. It needs much more work to make new players feel welcome. A good start would be a tutorial that explains some of the cryptic stuff, like how to actually build a ship; a starter area free from PVP, so one can at least learn the basics; and reliable hit detection for harvesting and combat. Adding a PVE option for those who just want to explore the world and do cool stuff without all the griefers would be even better.

Note: This preview is based on the closed beta (pre-Early Access release) version of the game.