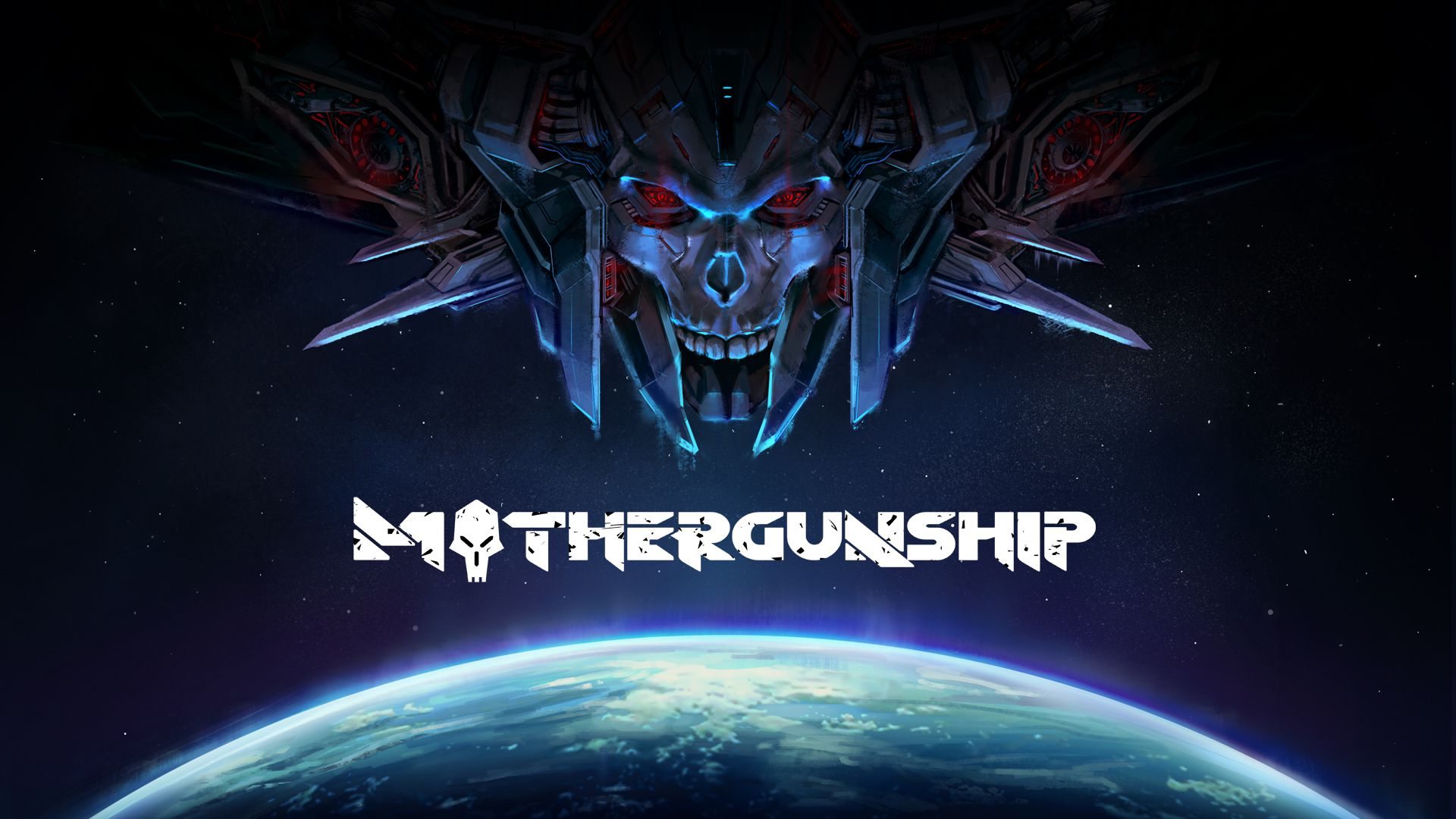 After a hands on playthrough with the bullet hell FPS MOTHERGUNSHIP in a training mission, it seems an assault on the titular ship is not yet ready for consumption.

Tower of Guns was an enjoyable roguelite FPS. Players were climbing a tower filled with canons and other tin cans while gracefully jumping between swarms of projectiles in gigantic rooms; First Person Bullet Hell. Although, shooting basic polygons with dull weapons was not satisfying for those in need of blood, guts, and big guns.

The developers, Terrible Posture Games, must have decided to focus their next game MOTHERGUNSHIP on the assembly of a big gun. They even use a nasty word, crafting. Fear not, it’s not crafting recipes for which you need to hunt down five penguins in order to build an earring giving +3 resistance to a newborn’s cries. Instead, it consists of buying weapons and merging them together on a foundation. Just like playing LEGO, in a more healthy and educational fashion. I took advantage of this experimental demo (not yet the main adventure) to play around. 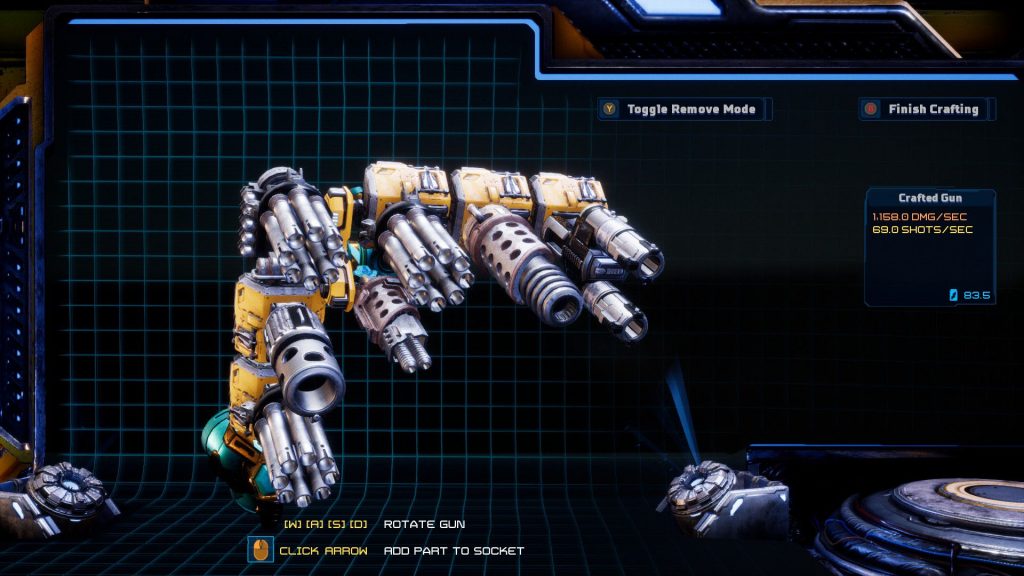 Do you feel like adding a shotgun? A minigun? No worries, go right at it. Everything is allowed, as long as you have building blocks and the 3D models do not overlap. I ended up toying with several miniguns and a shotgun accompanied with a flamethrower. Just imagine the feeling of overwhelming power granted by such a warmongering beauty, the ecstasy of mechanical destruction lent by a deluge of bullets and fire… Except that in action, I found myself blinded by the flames which prevented me from seeing anything on my screen as my monstrosity was going pew-pew. It was short. After a few seconds, I had to wait for the weapon to reload. In the meantime, all I had to defend myself was a pretty but useless punch. 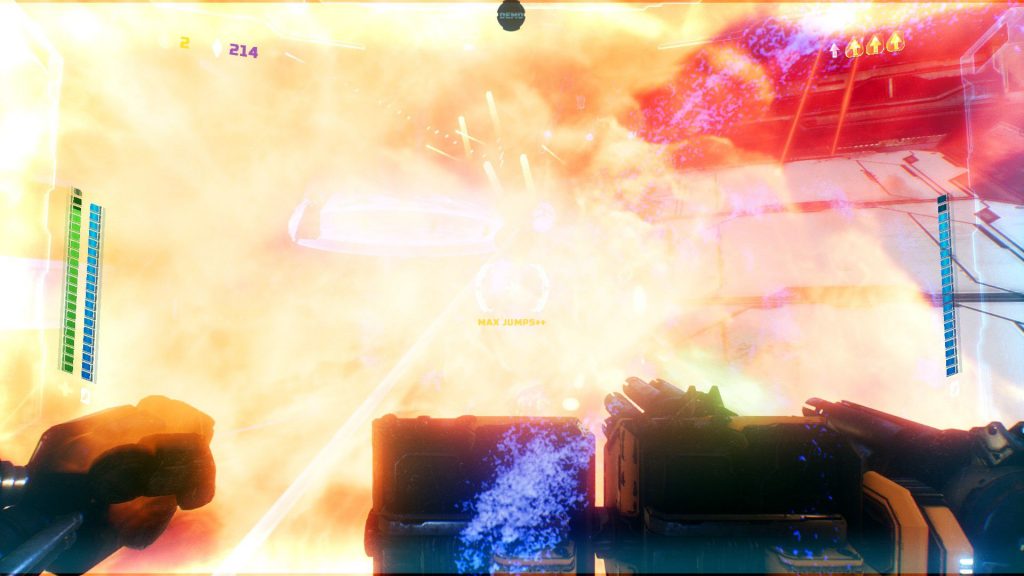 Having acknowledged my mistakes, I then proceeded to build two different weapons. One of them was focused on close quarter combat as it replaced my punch, the other was fit for long range engagements. Movements are quick, especially considering that I used a booster jet to dash in the direction I was shooting. This game also benefits from a quadruple jump, even though this time it does not go very high and is mostly used to correct a trajectory. 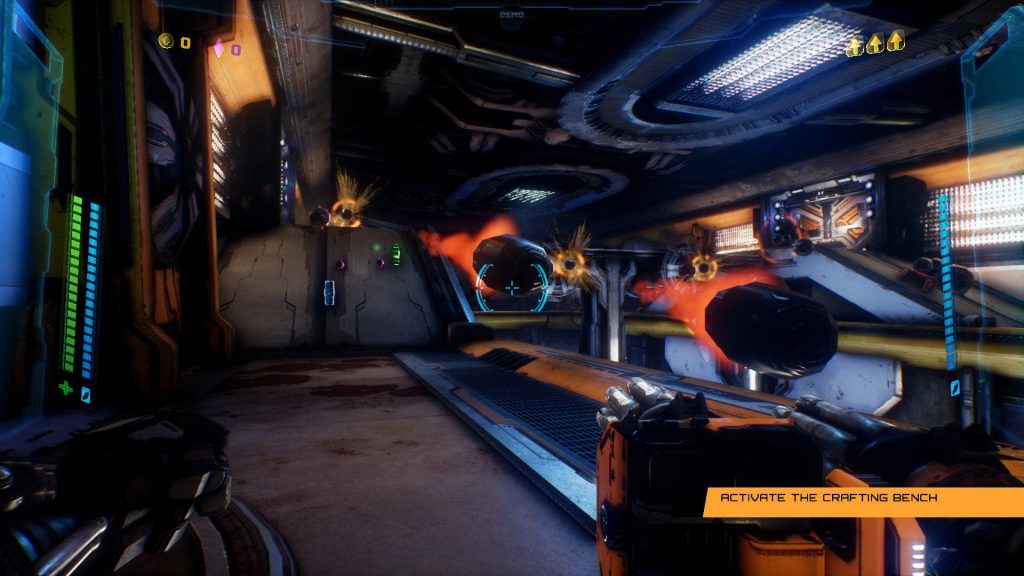 Despite all this arsenal of possibilities, the feeling was not quite there. Even worse, enemy canons were colored in black and it was hard to identify them over the background to quickly assess the threats. The rooms were too small for the fights to be anything but an unreadable mush.

Enemies sometimes leave behind health, and there is a decent amount of variation. Those which use a melee attack, those which fire volleys of missiles from afar, those which shield their friends, and so on. Shooting them lacks satisfying feedback. Also, I would have trouble telling you what they look like, between the lack of colors, all effects clogging my view and their quick death… I think that they were tin cans. 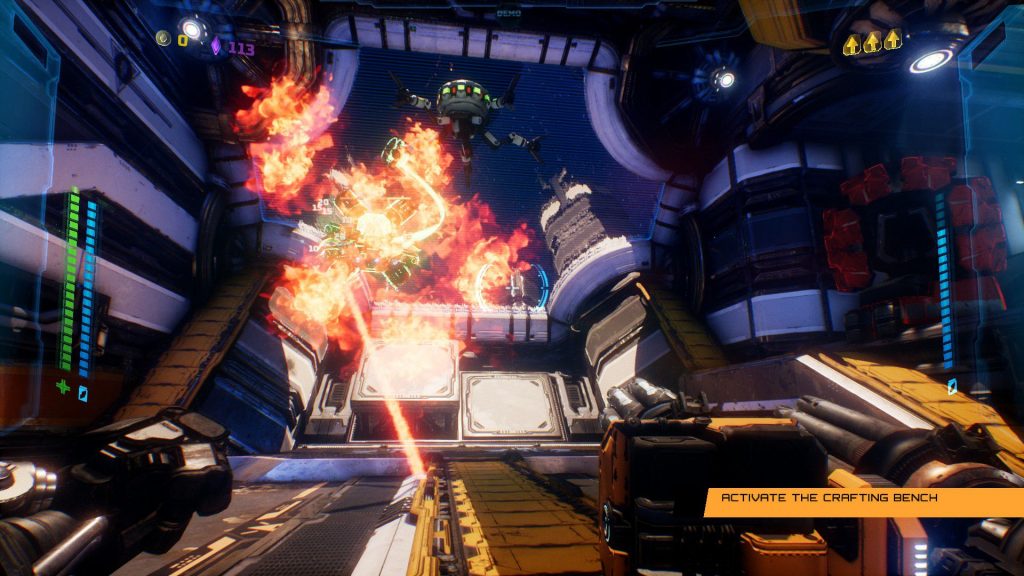 MOTHERGUNSHIP did not convince me, I even felt a tinge of disappointment as it was a step back from Tower of Guns. The game is visually too messy, and I hope that the final game will prove very different from what’s on offer here. If you want to make your own opinion, a demo is available today.