An approach to real-time strategy in local multi-player.

All roads lead to Rome

In this local multi-player game, each player has waves of little soldiers swarming from their base. The aim? Destroy the enemy base, and then the enemy army! The twist? There is no direct control of the warrior, they can only be guided by marking directions on the map.

Tile Battle marks an original entry in the dense word of local multi-player games. It reminds me a bit of a Tower Defense game, but instead of laying traps there are just spells and signposts to affect the various swarms. By that, I include other people’s troops as well! This is quite an interesting idea. Let’s say that you want your troops to assault the enemy fort. You place directions to make them turn and reach there. In the meantime, your adversary is doing the same. How about asking nicely for their army to lay down their weapons and let you slay them by the sword? Well, you can’t actually do that, but you can nicely guide them out of your borders by placing the same markings as the one your own armies use. Basically, you constantly have indirect control of the flow of all the troops on the battlefield. 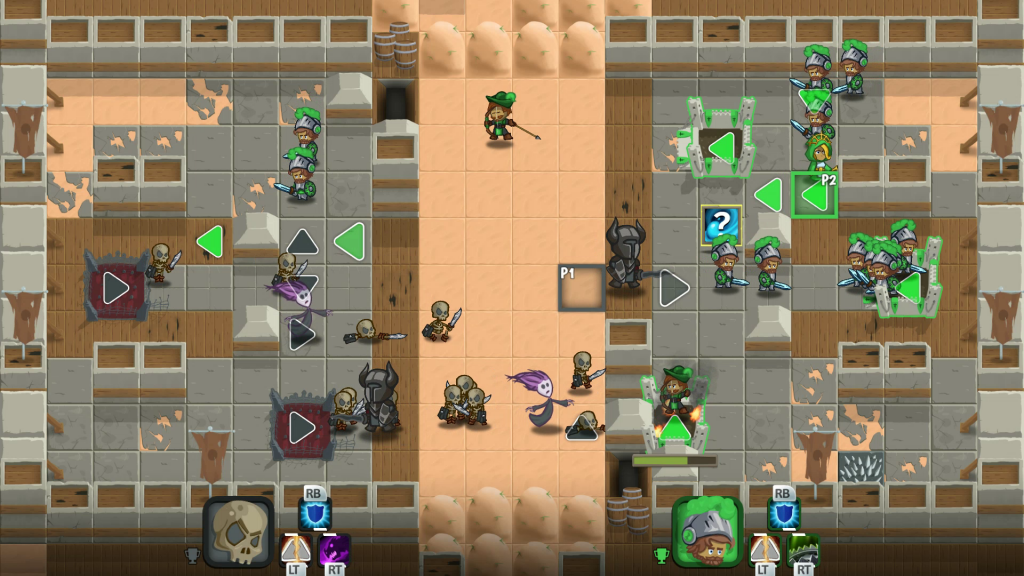 Lord of the Tiles

There are three factions to choose from, Orcs, Undead, and Humans. Each faction has different sorts of unique spells to choose before the battle, such as a boost to your troops or a trap. Always available is a lightning bolt to delete an enemy marking, and then there are power-ups to pick up on a map. There are many maps to choose from, each catered to the number of players entering the fray. Lack of content is certainly not one of this game’s sins. 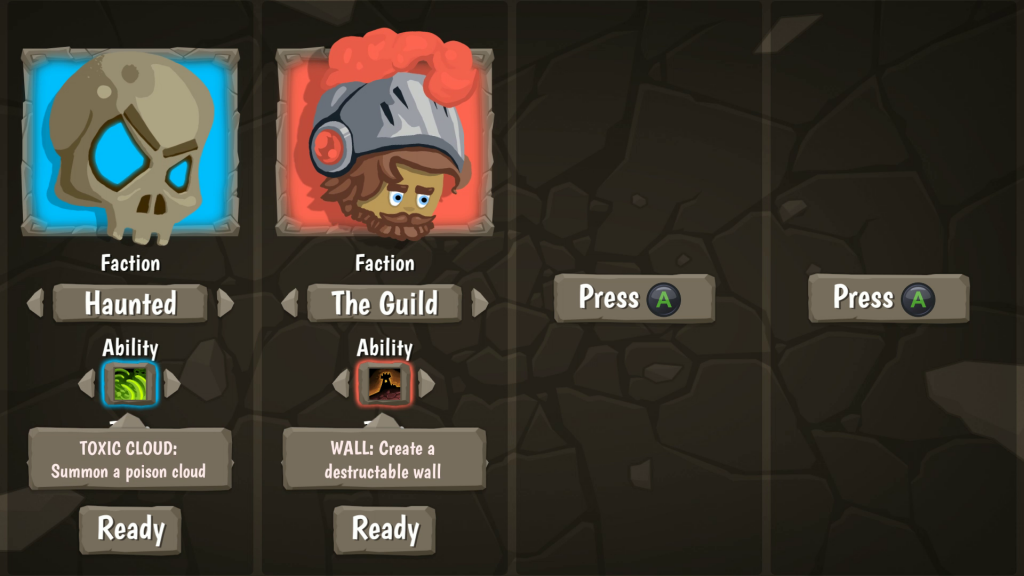 However, my biggest issue with this game is that everything takes place in real time. What’s more, the previous commands disappear. Only four direction signposts per player exist at any given time, which means that it’s very heavy on the micro-management side. Therefore, each player is constantly scrambling to make a path while the whole place is crawling like an ant colony. It is beyond chaotic.

Developer responded: I agree the game often feels too chaotic. I have plans to improve this with changes to the gameplay and additional options for game settings.

To make this system work, it would have been much better to segment the game into rounds, and during a round, the players have a few new permanent tiles to add to the map. That’s how it goes in boardgames, and that’s how Ultimate Chicken Horse and Trapper’s Delight deal with the issue of affecting the layout of the level. Then there would be the satisfying feeling of making progress towards a Grand Conveyor Belt Army while sabotaging the enemy plans. But oh wait, next round the enemy corrected the trajectory with a new sign.

I don’t know if my idea would have worked, but what I know for sure is that the current way the game works put several of us off. It was an exercise in frustration and a vertigo of control loss. When I was winning, I did not feel that I outsmarted my opponent, I just felt relief that somehow my mad button mashing had paid off, and relief that it was over and I could take a break. My friends instantly disliked the game, I have rarely heard them asking me to switch games so fast. Which is not a good sign for a party game. 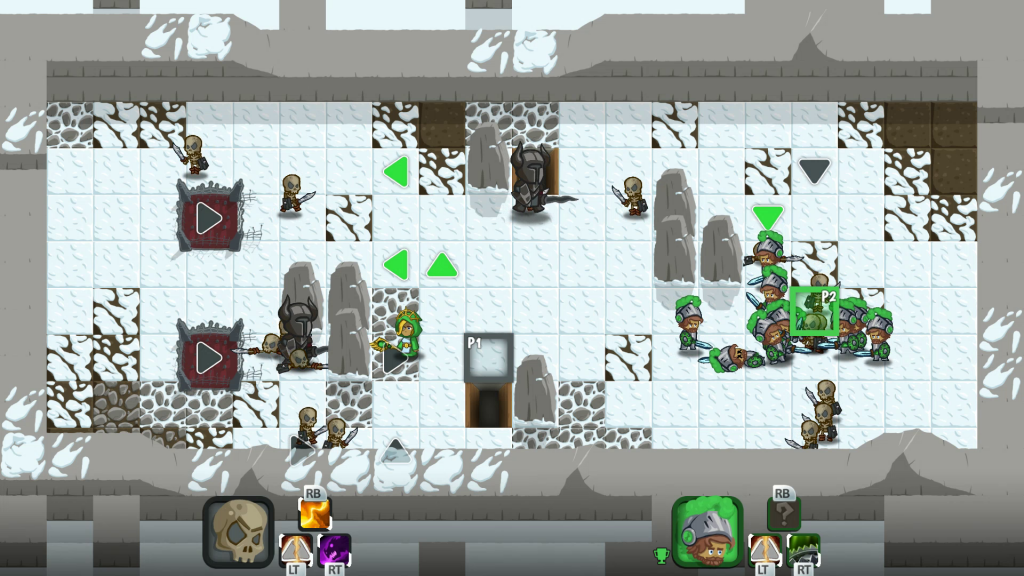 One of the issues is that the game fails to communicate its controls and mechanics properly. Case in point, the buttons X Y A B are actually marking directions on a tile. This is fine once you get it, but the first minutes were painfully confusing when everyone was pressing A on the map, asking all the troops to go south. Buttons for spells (such as RT and LT) are displayed on the screen, which is good. It’s just that we were expecting to be given the movement tiles rather than mashing the buttons like that. 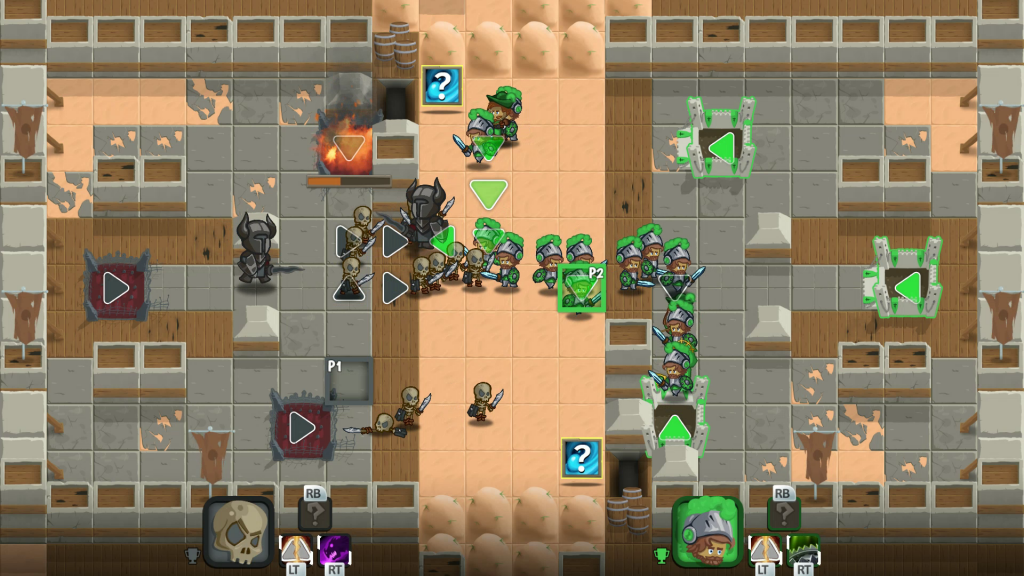 Graphics are not particularly outstanding, but cute and readable. The game runs well, no crashes or bugs to report. The music had the appropriate fantasy tone and was much better than the usual party games. For those who care about that, there is no online component, it’s just local multi-player. 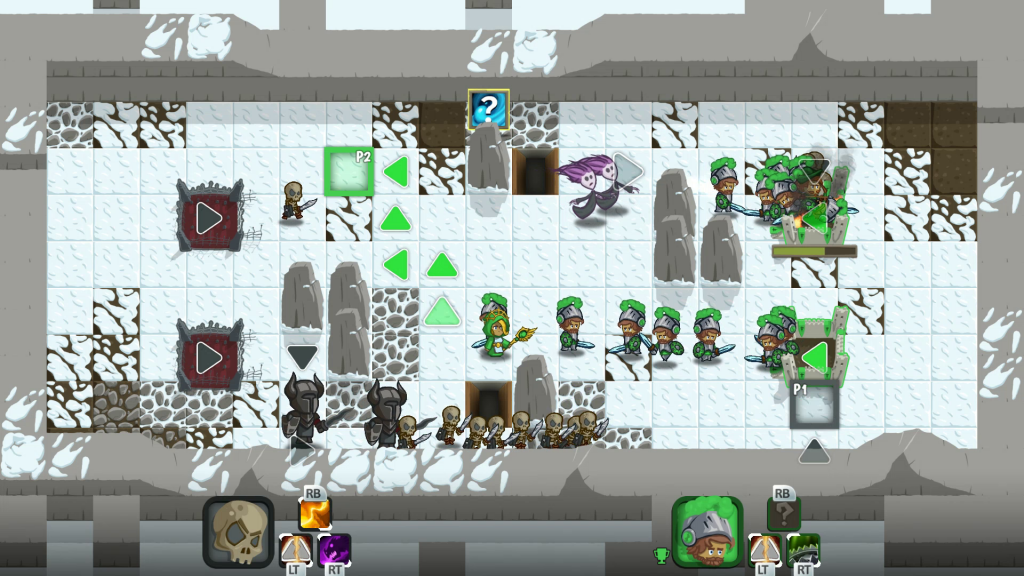 Tile Battle has variety and a good idea of giving directions to waves of ants-lemmings-soldiers, however the execution is not quite there and the game is not satisfying to play. My friends and I are certainly not going to add it to our rotation, but still the developer made an encouraging first game and will hopefully use the experience to make something better next time.