Bullet Witch was originally released on Xbox 360 over a decade ago. Now Marvelous, Inc. and XSEED Games have remastered it for PC. I bought the original version in a second-hand bargain bin for a pittance a few years ago. I played it for a few hours and wasn’t very impressed. I was pretty surprised to hear that it was being remastered for PC and wasn’t planning on playing it, but I think I’m glad I did.

Bullet Witch is a third-person action game in which you take control of Alicia, a young witch with a demon inside her head, guiding and protecting her in her quest to eradicate the huge army of demons that has taken control of the planet, wiping out most of humanity. Equipped with powerful magic and her gunrod — a huge occult gun that fires bullets made from Alicia’s magical power (mana) — as well as magical health regeneration and a strong resistance to physical damage, Alicia is a veritable demon-butt-kicking machine.

Bullet Witch overall seemed to me to look the worst of the Xbox 360 bad-girl action games I played. The world graphics and textures were bland, the enemies all looked the same, and the big special effects weren’t very impressive. Alicia, in contrast, was well modelled and textured, and most of her animations were pretty good, too. Moving to PC, not much has changed. 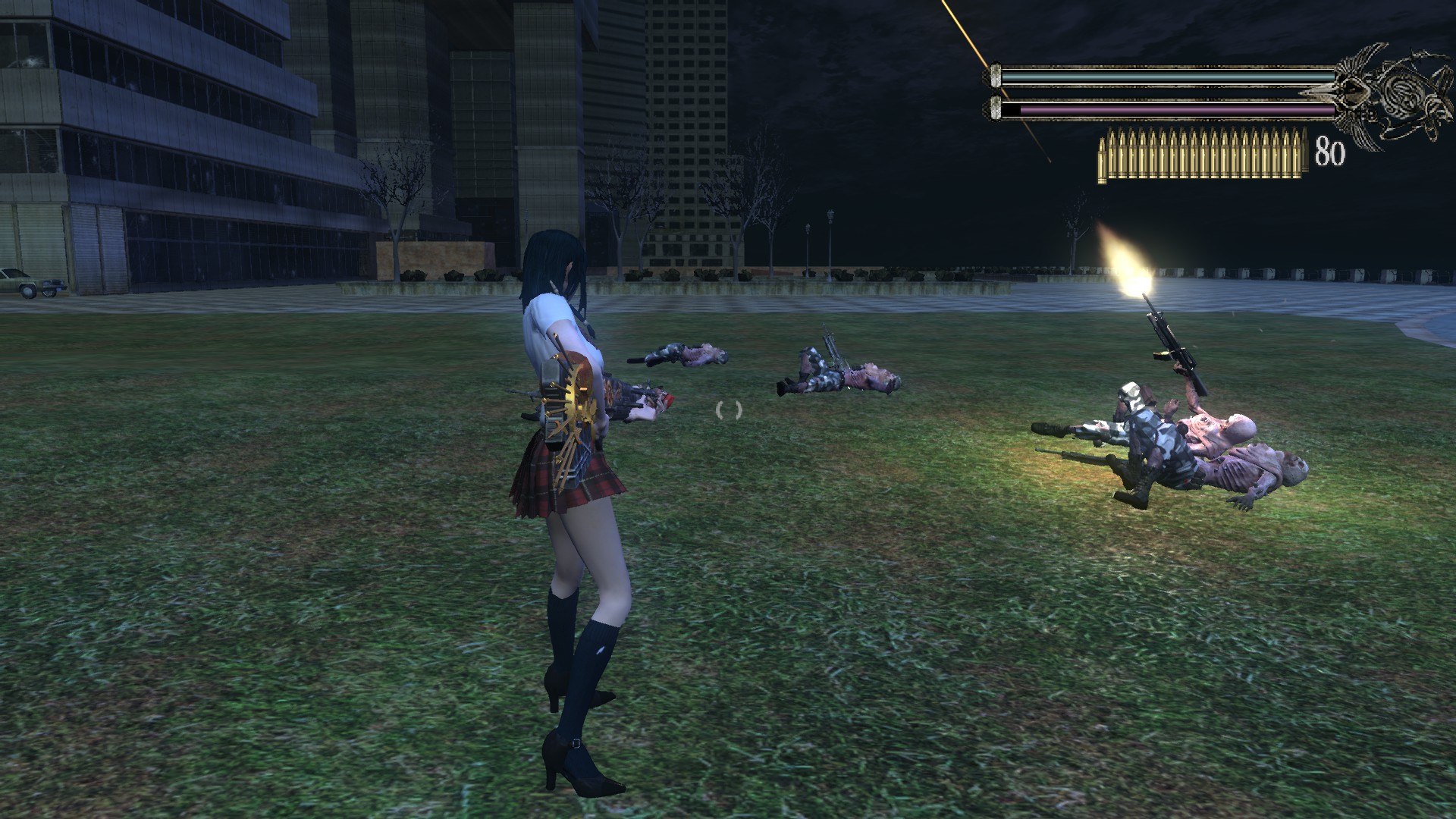 The PC version adds some graphical options to the launcher (they can’t be adjusted in game, sadly), but not very many: Shadow Display, Soft Anti-alias, and mipmapping, plus resolution options and FPS lock. There are also some lighting effects added, of which I’m assuming the mega-bloom when leaving the mining tunnel is one. Turning on the shadows actually made everything look worse, as the shadows flickered quite often, but apart from that all of the new options did make the game look better. 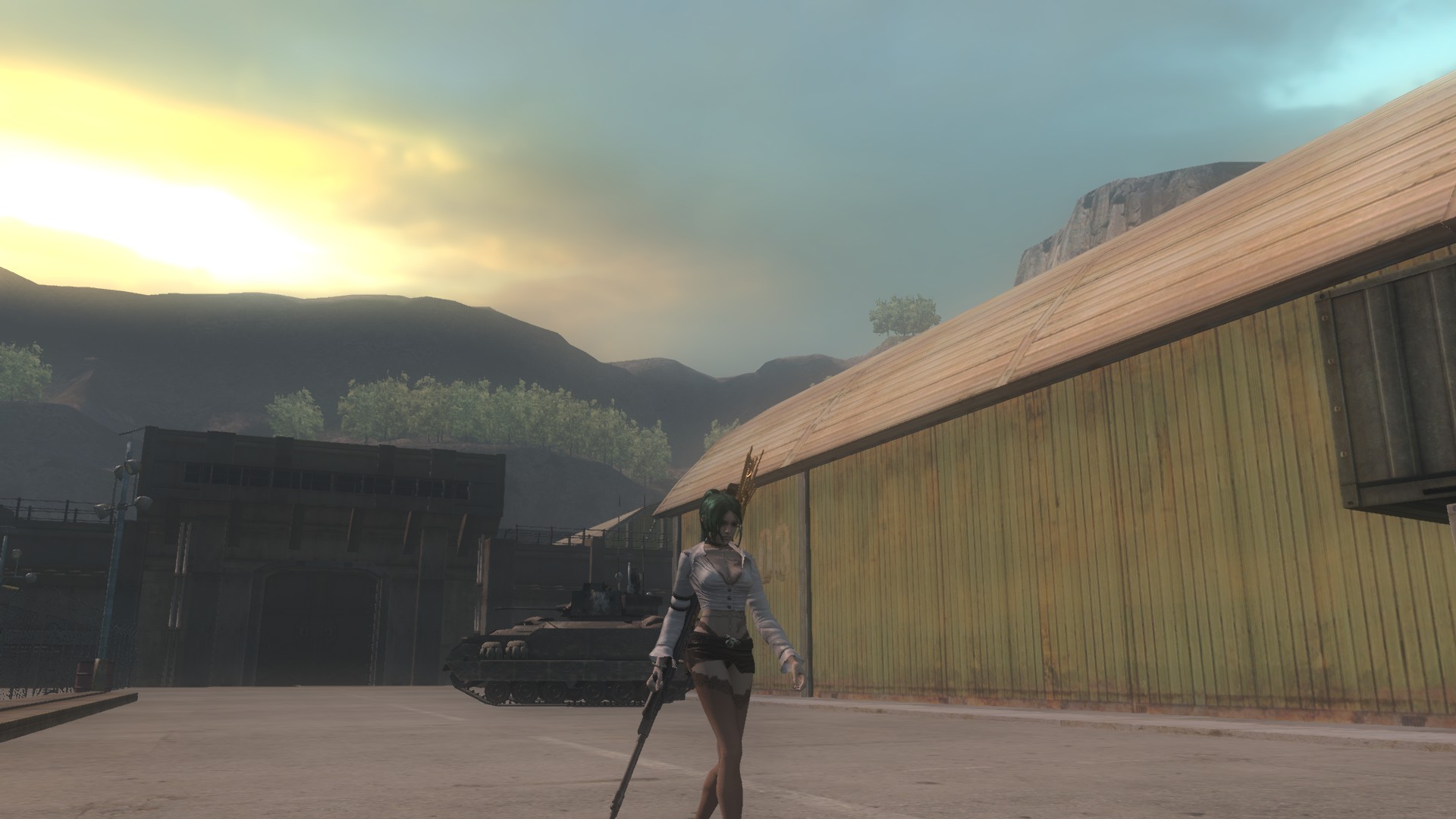 Alicia looks even better in antialiased HD, and this version unlocks the game’s five extra costumes right from the start, allowing you to play with them immediately. These can only be changed from the main menu, unfortunately — an in-game option would have been so much better — but it’s definitely worth the effort of seeing each of them at least once. Sadly even with these changes, the world is still jagged and uninteresting and the textures are still bland, just now they’re bland in more detail. There are also still terrible object pop-in issues, some clipping problems, and invisible walls stopping you going outside the play area in places.

CG videos seem to be unchanged from the Xbox 360 version, which leads to the slightly weird outcome of Alicia actually looking better in game than in some of the videos. The extra costumes also don’t feature in the videos; she only wears them in game. Strangely, Alicia’s face doesn’t animate properly in all of the costumes.

The game’s soundtrack is fairly typical of the genre: big, dramatic, synthesised orchestral tracks. Sound effects are fine, with loud bullet sounds for each of the gun types, big explosions, and lots of booms and crashes from things exploding. The script is fully spoken and subtitled, though a few lines were subtitled in Japanese! The voice acting is professional and sometimes a bit ‘hammy’, but the script writing is of the “so bad it’s good” variety. It made me laugh a few times. 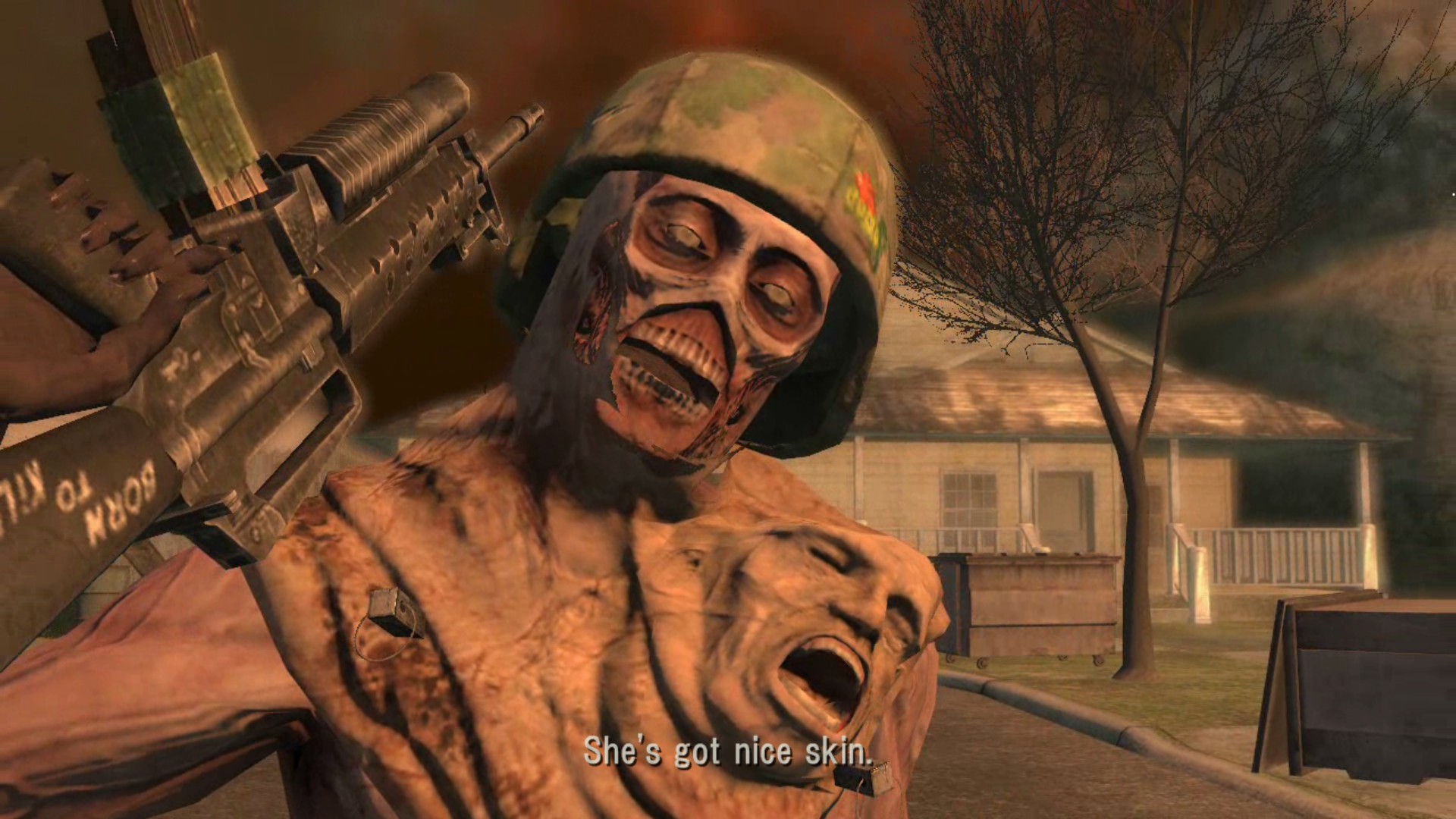 Default volume levels seem a bit weird, with music and sound effects often drowning out lines of dialog from civilians. These are only there for flavour, anyway, but I do wonder why they’re not a bit louder. 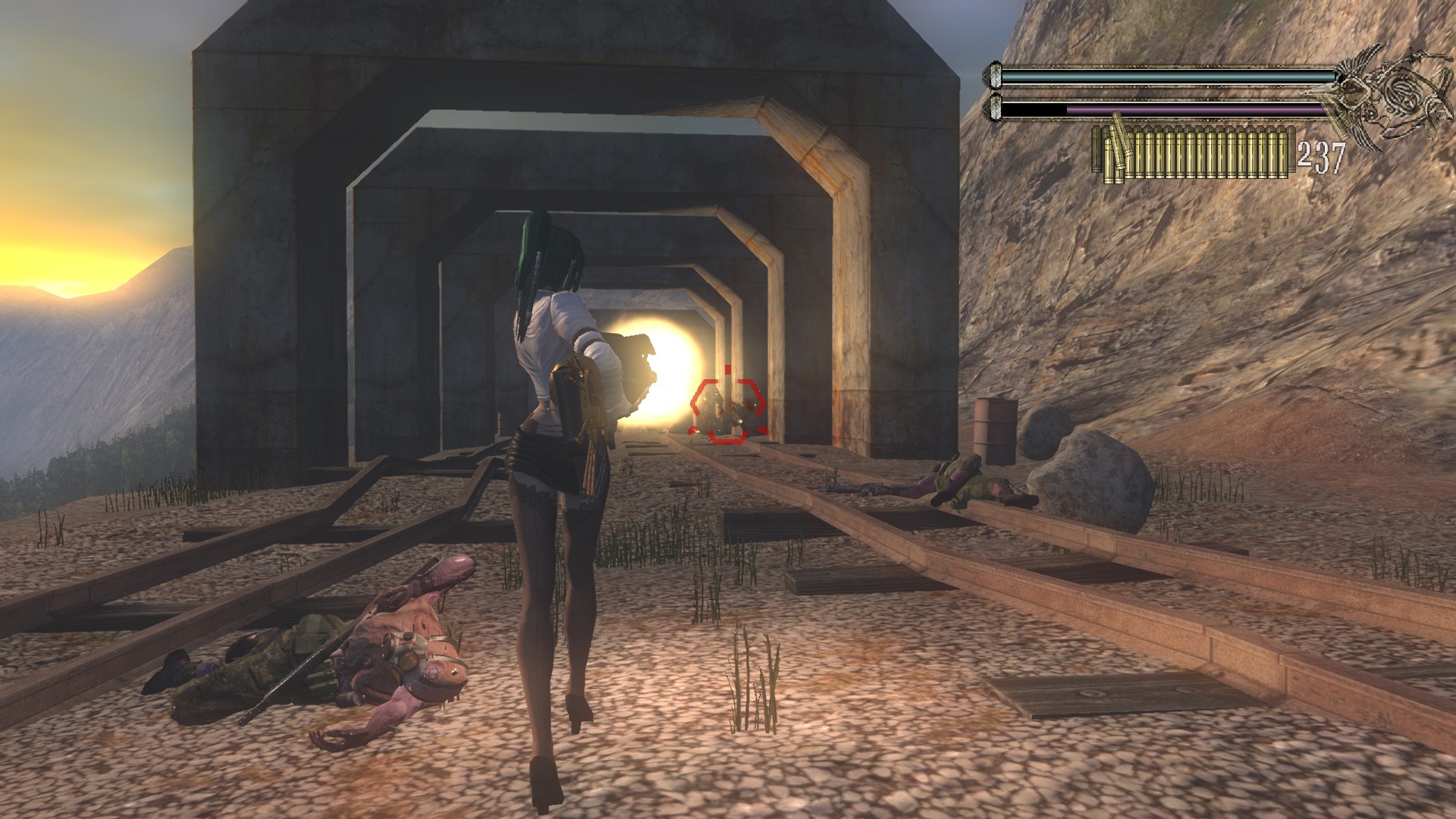 In Bullet Witch you control Alicia as she traverses the city and countryside killing demons and searching for the cause of the demon outbreak. The game plays as a typical third-person brawler/shooter, from an over-the-shoulder camera, which you can freely rotate around Alicia with your right hand, while moving her about with your left. Alicia can also crouch to reduce her target profile and increase her accuracy, and jump/dodge to leap over enemies and obstacles or dodge attacks. 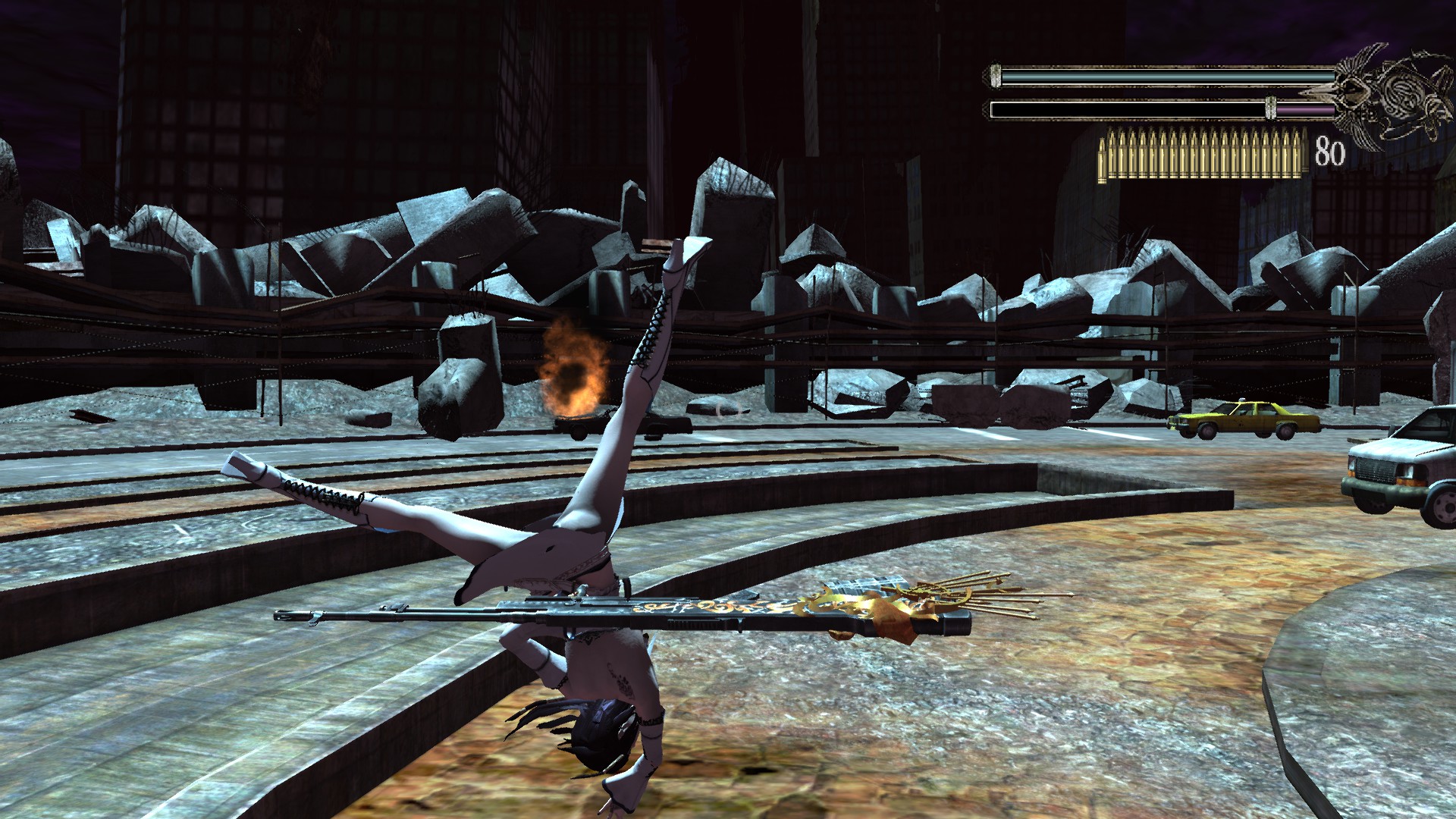 I never imagined playing a third-person action shooter/fighter ported from console would actually be more fun with mouse and keyboard, but Bullet Witch definitely is. Where the console and PC controller combat felt a bit unwieldy and often hard to aim, the precision of the mouse is wonderful, allowing Alicia to cut a swathe through her enemies with ease. Apparently the developers have made some game balance changes, too, though I couldn’t tell you what they are, but I think the keyboard and mouse control is the single biggest improvement to the gameplay. The radial spell menu is the only component that doesn’t work well in this setup, but even that isn’t terrible; it’s just not as good as hotkeys.

The game is broken up into levels, each of which has a number of auto-save checkpoints, which are the only save system in the game. This is a bit frustrating as you can’t save wherever you feel like it or have multiple saves going at once (e.g. different difficulty levels), but it’s not unusual for the genre. The core gameplay consists of moving a brief distance through the current level until enemies spawn, taking out those enemies, and then moving forward again. It’s completely linear. 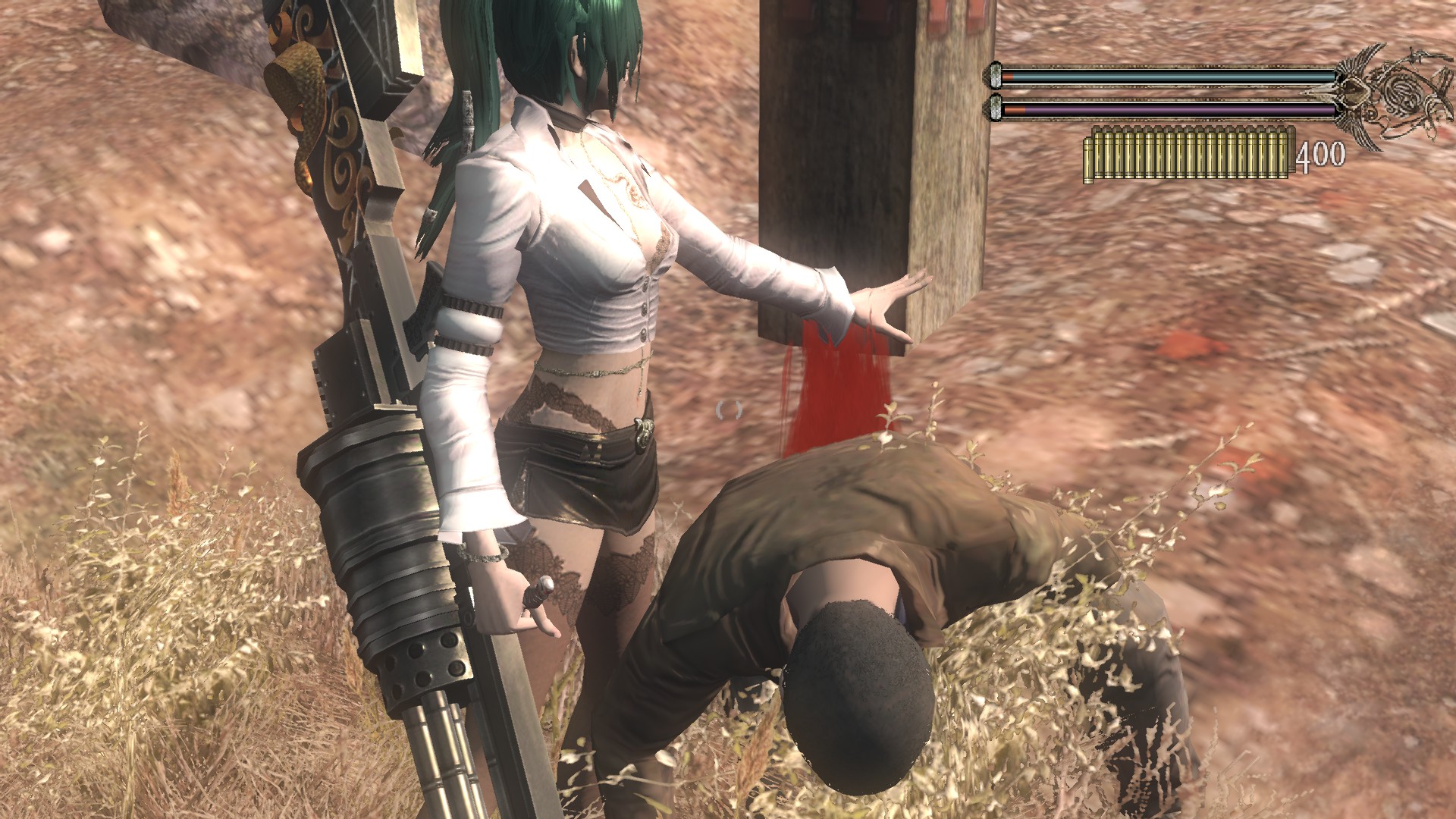 At the end of each level you’re given a score based on your performance, along with a number of points that can be used to unlock new spells or gunrods or enhance Alicia’s abilities. There are only small numbers of different enemy types and attack patterns and a handful of unique bosses. The bosses can be tricky, especially on the hard difficulty level, but most of the game is pretty easy, particularly once you’ve acquired all the gunrods and upgraded Alicia’s abilities. The game is very short — I completed it in under four hours, I think — and very repetitive. 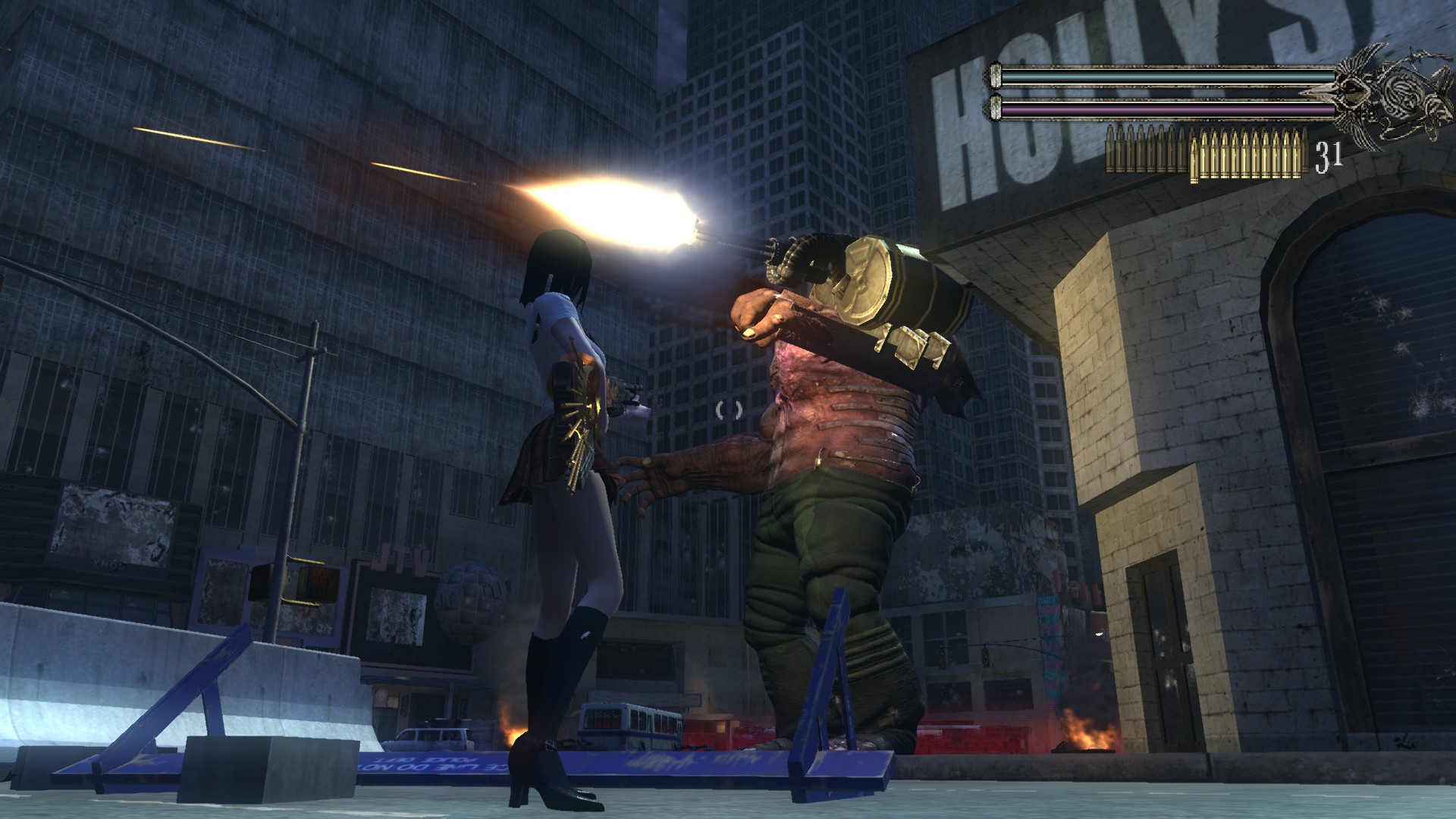 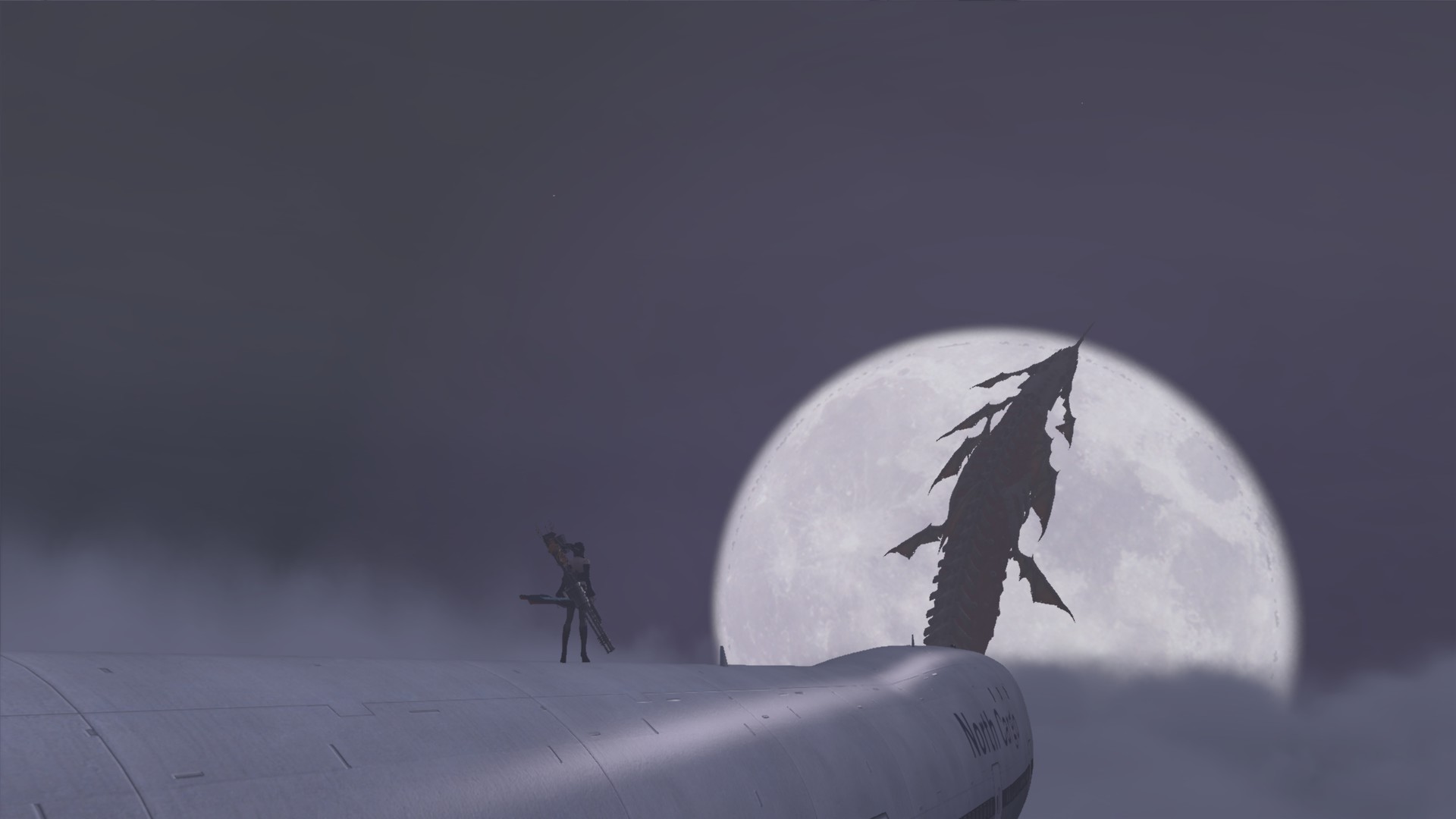 To try to improve longevity the game includes Concept Missions, which involve different tasks on some of the story mode’s maps, but these don’t add a great amount to the game; I played with a couple of them, but after completing the campaign in Normal difficulty and doing a couple of levels in both Easy and Hard, I couldn’t find the motivation to complete all of them; the action wasn’t really any different to the core game.

Other than the length of the campaign, I saw a couple of weird ragdoll issues that caused seizure-like movements in dead bodies, encountered longer-than-expected loading times, and noticed that the in-game radial menu for spells has controller buttons baked into the UI, which can be a bit confusing when using the keyboard. 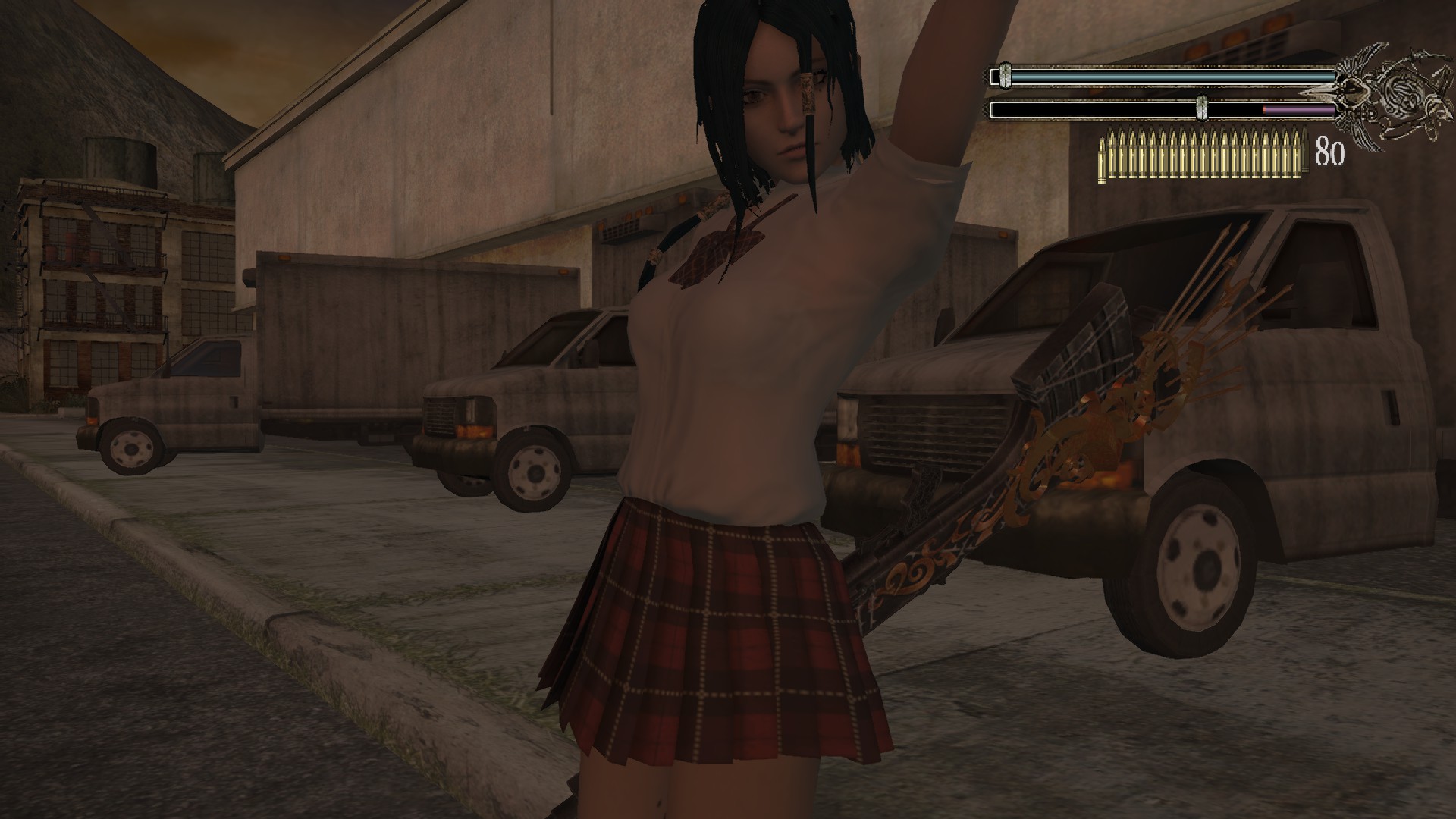 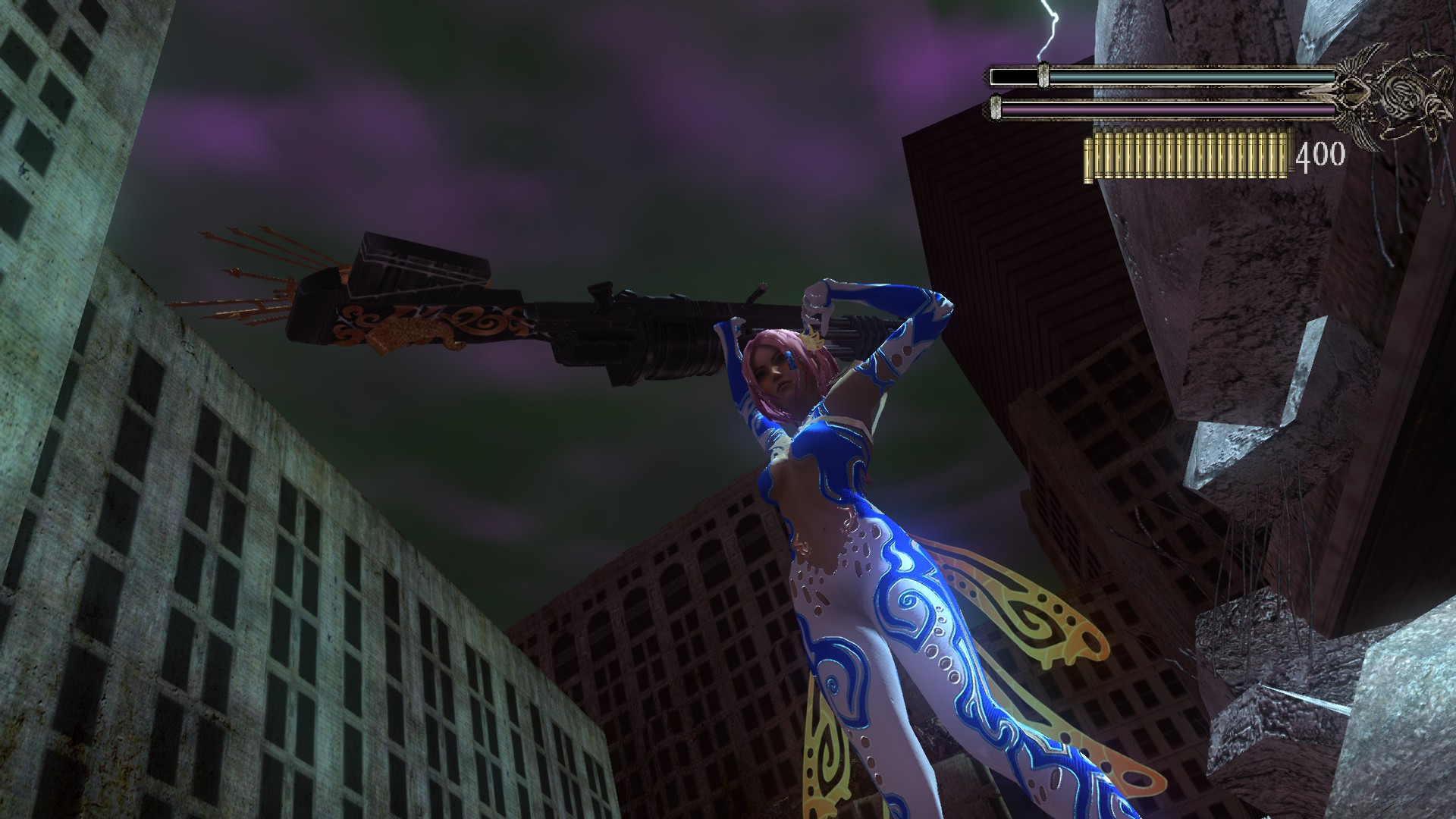 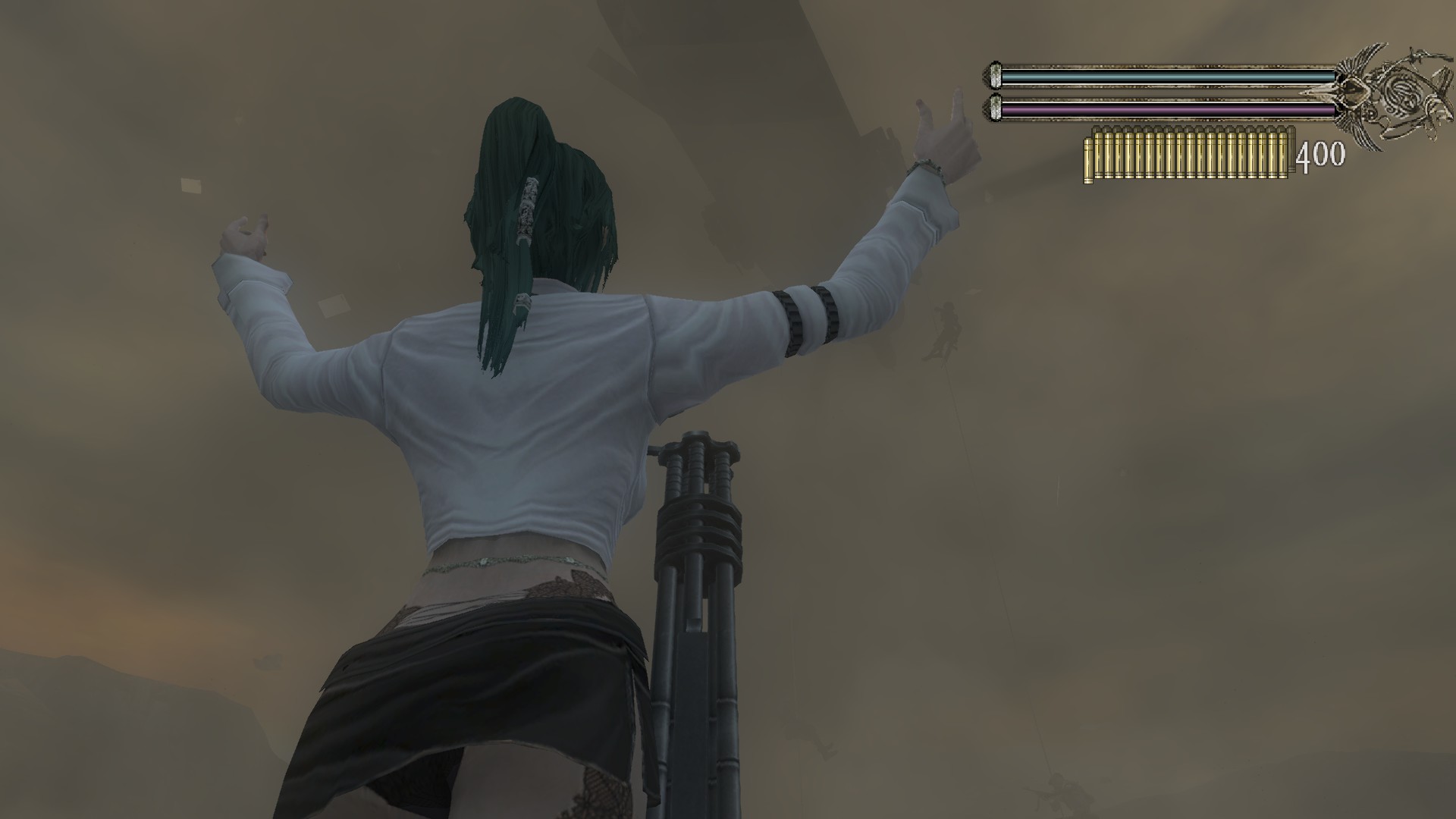 So, how does the PC version of Bullet Witch stack up?

Well, on the one hand, the mouse and keyboard controls make the combat less frustrating, at least apart from the controls for spell selection, and the addition at the beginning of the five variant costumes — which are, frankly, quite sexy — is a nice bonus. But on the other hand, the touted graphical improvements amount to little more than an increase in resolution and anti-aliasing, with a few additional lighting effects, but the shadows flicker and most of the world textures seem unchanged — i.e. still terrible. And it’s still the same old game, with bland combat, bland levels, bland world graphics, and a laughably crazy script that’s shorter than Alicia’s secretary skirt. 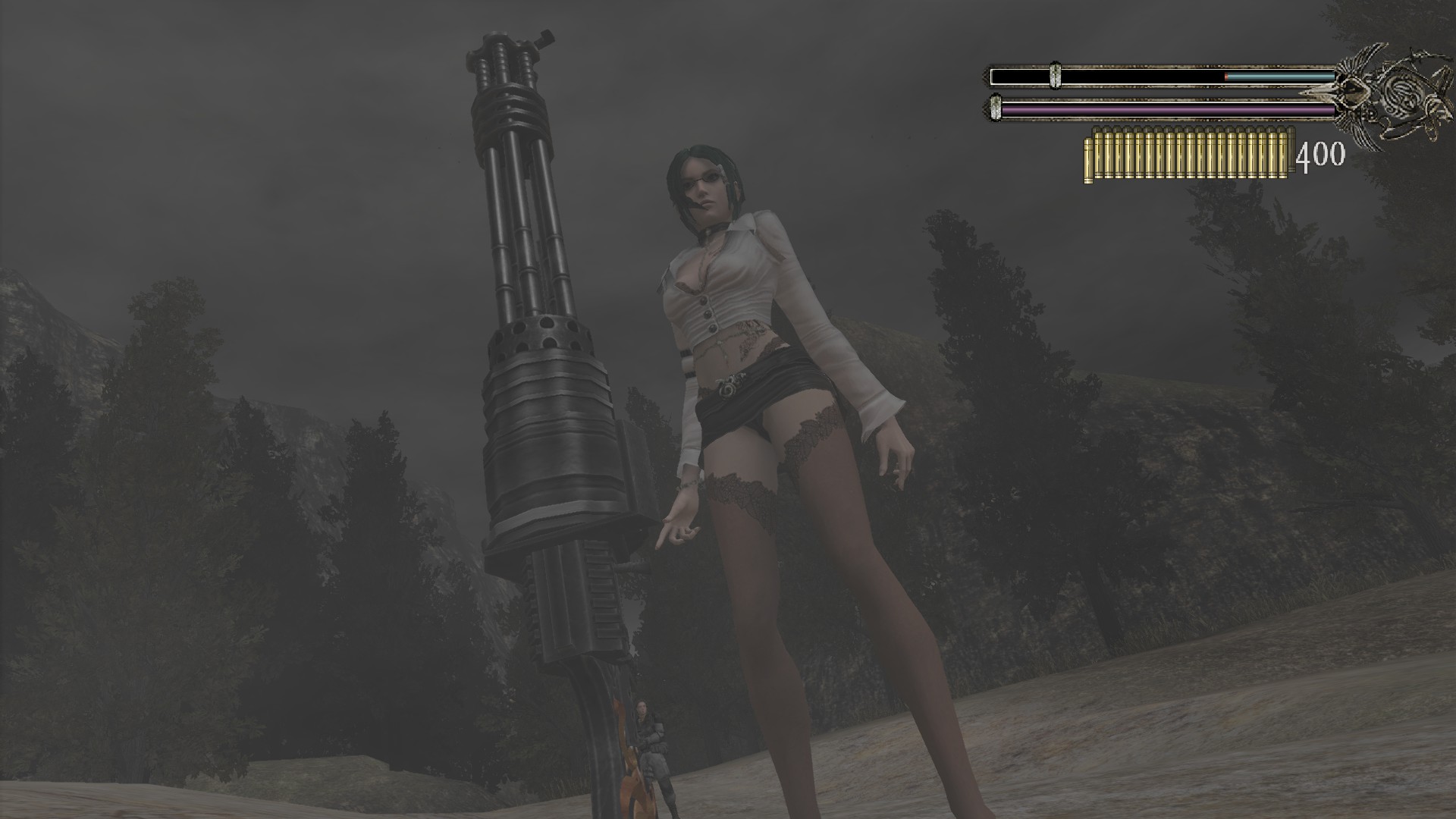 I’ve been right on the fence with this one, but the outfits finally won me over. Yes, it plays a bit like a poor man’s Bayonetta, but buy it for Alicia rather than the gameplay; she’s a better waifu than Bayonetta will ever be! 😉