Tempest Citadel is an RTS/Management game with a good setting and a decent storyline, but it falls short with its combat mechanics and generally poor explanations of how the game itself works. A real pity, because it had good potential.

Tempest Citadel is a tactical management game and RTS hybrid. It clearly takes inspiration from classics of this genre such as XCOM, except in this title the combat is in real-time and not turn based, which is a rather big difference. You will impersonate the leader of a secret Terran expedition to a very distant planet, though the true purpose of this mission is to find the source of a mysterious alien technology that fell on Earth years before, called the “Interstellar Gift”. A team of one hundred of the most competent men and women has then been sent through Hyperspace to find answers and then return to Earth. But things don’t go smoothly, as there are other factions on the same planet, warring between each other and probably also in search for the powerful technologies hidden on the planet. Your mission then becomes to survive and do everything you can in order to secure the technology while at the same time defending from the other factions, and making difficult crucial decisions as Commander.

General Gameplay
The gameplay of Tempest Citadel is divided in two segments. The first, and most consistent segment, is the Management one. You will see an overview of your Citadel composed of many windows and menus managing all the aspects of what happens inside and outside of it. You will have to build new facilities such as hospitals, factories, research centers and so on.  Each of these have a specific function and a cost in resources the are acquired in an ordered fashion from Ground Missions and also passively from Controlled Facilities on the planet surface.

Players will also be tasked with managing the population, assigning each of the available crew members to a role (Research, Soldiers, Engineers, Scavengers…) based on their aptitude for that specific work, displayed in their profile. You will also be able to decide the equipment of every single crew member, though equipment is needed only by those going to Ground Missions (which are always combat missions). Keeping an eye on how much space there is left in the quarters and how many food reserves you have will be crucial to keep the crew morale up at high standards, if it decreases, bad things will start to happen and people will work less effectively.

Research is a crucial part of management and players will be able to select several Research Topics, each including many technologies. The more researchers and research centers you have, the quicker research is. You can also decide the priority of each single research, and even stop some if you don’t need them quickly. Research will give you the ability to build new weapons, armors, technologies, items and upgrades. Time is, however, very valuable in Tempest Citadel, and you should take on any available mission and task right when it presents itself, unless you are very under-powered, because letting time flow means enemies will get always stronger, so it is a very good idea to be efficient and perform several activities in the shortest possible time.

That’s not all, there is more. You will also have to decide in some critical matters as a commander. Certain dialogue appears along with the main story or side quests to give you choices that will influence the outcome of the story in more or less severe ways, or at least that’s what it looks like. And of course, you will also have to decide what ground missions the Ground Team will undertake, and also do a nice scavenging mini-game at the end of some ground missions to gather resources, where you have to dig in a bunker with various tools in the shortest time possible.

The management part is overall satisfying and pretty well done, even it not very complex compared to other similar games. Some things however are not explained and you will have to figure them out alone, the tutorial is very basic and does not cover many things, and this can lead to frustration because you don’t understand how things work. 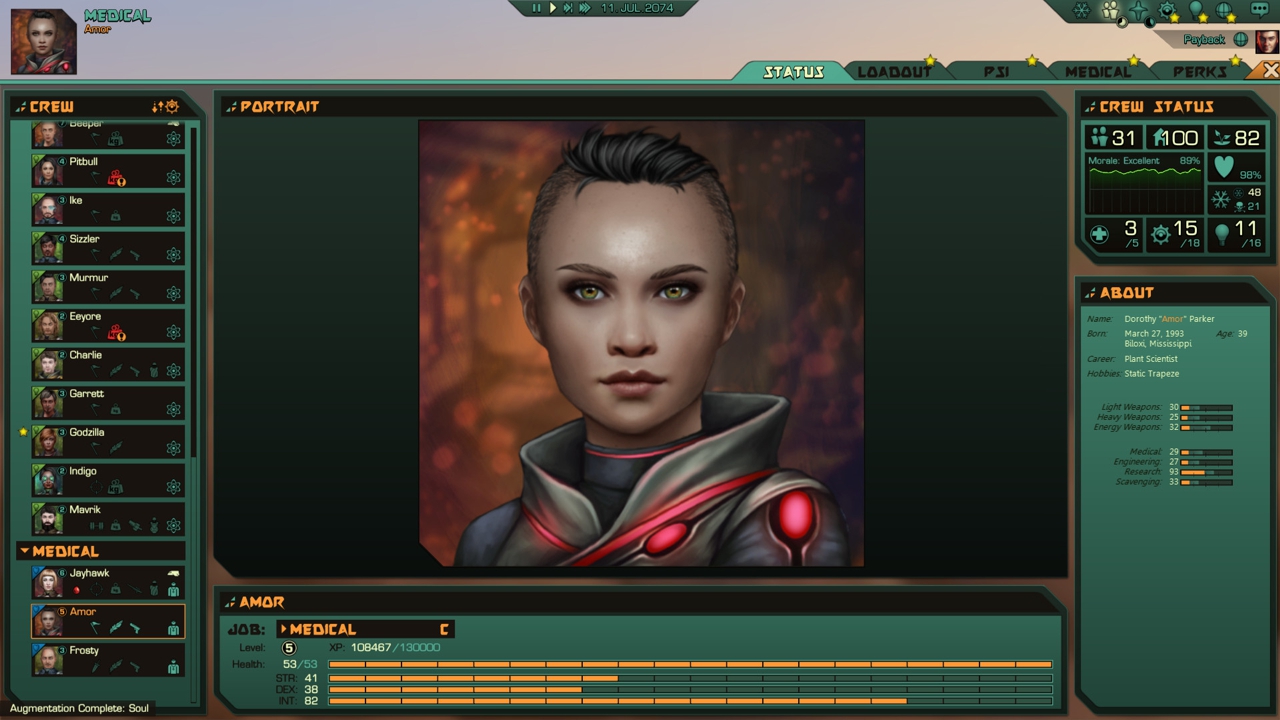 Combat System
The combat is the second part of the gameplay, and it is real-time, an unusual choice since almost all games of this sub-genre are turn-based. There is real-time pause, anyway.

Once your team is geared and ready, it will deploy to a combat scenario. Combat maps are generally small, and battles can be played automatically or manually, however manual control is a much better choice. In battle you will be able to decide your team’s tactics, formation, and approach. There are several types and each favors more defensive or offensive maneuvers. What changes between them is that depending on what behaviors you select, your team will use Items and target enemies with different priorities. You cannot decide when to use specific items, and you cannot even target a specific enemy, everything is automated and controlled by these AI behaviors you can change.

There is also a cover system, meaning units in areas displaying a green circle below them will be in cover and get less damage. This, however, is not explained, and sometimes cover just looks like it doesn’t work.

In my experience, combat is automated too much, clunky, and obscure to be enjoyed. Sometimes, you will encounter a group of enemies and wipe them out easily in seconds, while some other times that will happen right back at you. There is no combat log, or any detailed statistic or explanation of what happens in battle, just armor, shield, health bars, and damage numbers.  It is almost like it has the combat of an action RPG but in an RTS, very confusing, and not explained at all by the game itself. The combat mechanics are still a partial mystery to me even after I put in quite some time dedicating myself to understand it.

I’ll remember the first time I saw enemies with laser rifles, I said to myself “Damn they are OP because my team got destroyed in seconds”.  I researched them after some time and equipped them on my best soldiers. While enemies always 1-2 shot my soldiers with laser rifles, mine instead did little damage if they hit back at all. Why? I will never know, because the game does not describe anything about what traits on items do, nothing about hit and miss percentages, nothing about many things that should be explained but are not.

It is disappointing and approximate, combat is the bad side of this game.

Content
In 12-14 hours I managed to arrive at 50% completion with all side quests done. I guess the game lasts around 25-30 Hours.

Balancing
The management part is balanced enough in resource ratios and consumption. A bit more machinery would not be bad as it is always lacking. Combat balance? Not good. Not good at all. Feels more random and luck based than anything else.

Challenge
Overall, the game is a good challenge, but combat feels too random and obscure to really tell. 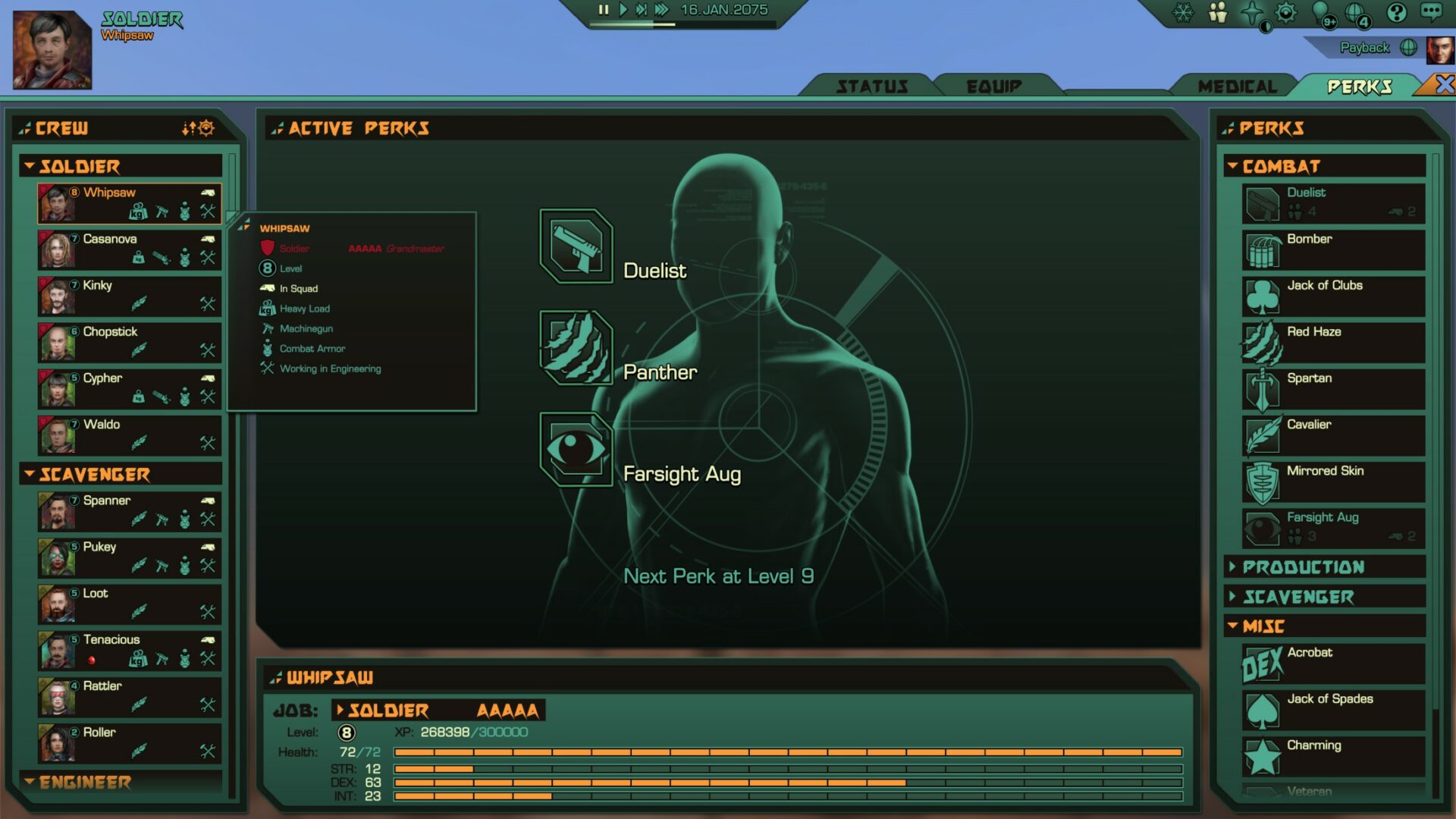 Graphics/Sound
The graphical appearance is very dated for the 3D portion, but well done portraits and backgrounds. Overall, sub-par for 2018 standards even for indies. The soundtrack and effects are adequate, but nothing exceptional.

Performance/Stability
Nothing to report.  There were o stability issues

AI
Enemy AI is very very basic and will just run towards you in masse to shoot you.

Quality of Life/Bugs/Issues
Nothing to report. 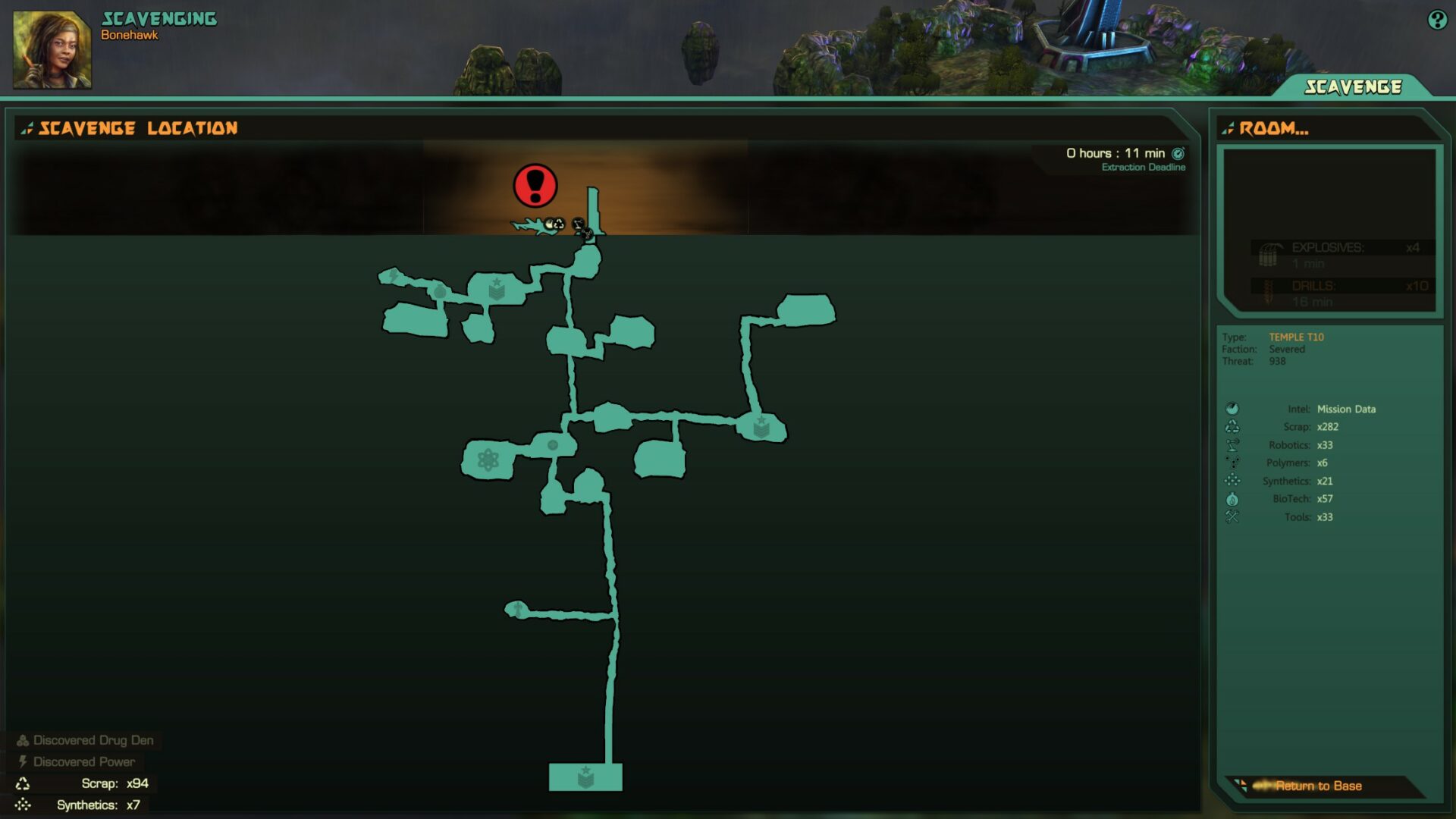 Tempest Citadel is a game with a decent setting and story, but unfortunately it falls short because of obscure mechanics, excessive automation, unbalanced combat,  and poor explanations of what is going on and why.

Developer response: The game is loved by the people who like simple combat and just want to get stuck into the management and stotyline. It was never meant to be an RTS or XCom – you don’t win the battles by quick mouse action, rather by carefully developing and equipping your crew in advance. Good preparation can turn your success rates from 5% to 80% and each enemy has different strengths and vulnerabilities – this accounts for the variability in battle outcomes.