Shake-down enemies with your fists or your wallet in this quirky beat-em-up by Nippon Ichi.

Time for Loan Sharks to get Karma

Money makes the world go ’round: an undeniable fact, and one that also pertains to the world of video games, both in and out. It’s probably no coincidence the first pick-up a lot of gamers saw were coins in Mario. Nowhere is this more true than in RPGs, I’d say. If you play one from either side of the pond odds are you’ll end up fattening quite a few wallets across whatever world needs saving. It’s common enough some genres have started lampooning the fact. Recettear for example, had you playing as the shopkeep whose wallet got fattened.

Penny-Punching Princess takes things further, making a game where money is a direct weapon. It’s by Nippon Ichi, creators of the Disgaea series, so right away it’s definitely going to be a quirky game that doesn’t take itself too seriously. In it you play as the titular Princess with a chip on her shoulder, wanting to avenge her father after he was ruined by shady loans.

Naturally. you do that by storming their lairs and pummeling them to a man. The gameplay is pretty self-explanatory with beat-em-up gameplay from a top-down perspective. You have a combo, a heavy attack, and special moves. Where it gets complex is the Princess’ secret weapon, a calculator gifted to her by the god of money in her universe. It charges over time, and when full you can pull it out, type out what an enemy or trap is worth and convert them to your side. 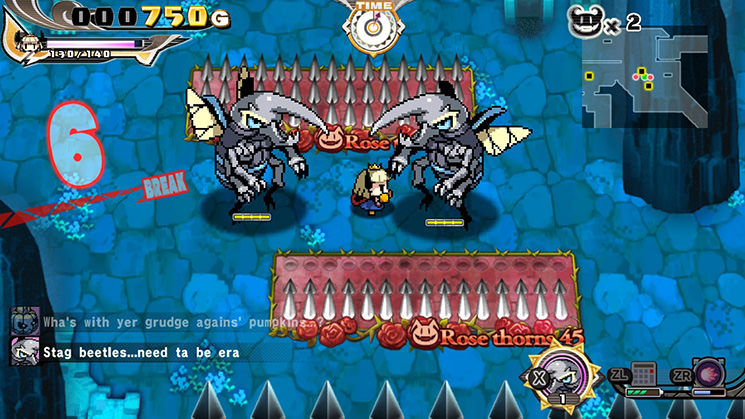 This doesn’t just remove them from combat of course, but also gives you access to them as a limited-use special attack. For enemies this just involves them popping up for a brief attack, but traps stay where they are and can be triggered after you’ve lured foes onto them, usually resulting in far greater damage. In-between stages, enemies you’ve bribed also serve to let you craft armor, which affects your stats and gives you different special moves, and create statues to the god of money. You can also find these in hidden chests during stages and they give you a skill point each to raise your attack, defense, and even special stats like how many times you can use bribed traps.

This is a lot of potential advantages, and you’ll need to take advantage of them, as enemies in Penny Punching Princess can get quite brutal at times, taking off significant chunks of your health if they connect. Every encounter, of which there are several at each stage, pits the odds against you, typically surrounding you with enemies and traps which you’ll need to take advantage of to prevail. Using the calculator can be tricky though, as you have to do so in real-time, and while there is a shortcut you still have to be careful. Luckily as the stages get longer there are checkpoints on every floor. 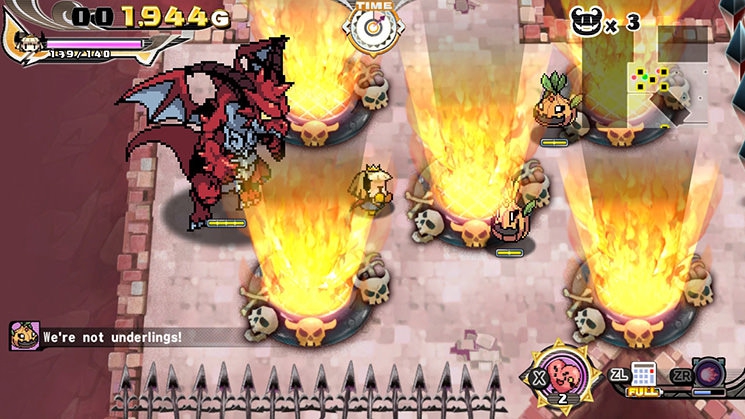 As for the story, it’s about what you’d expect from a typical Nippon Ichi game. The characters lampoon the silly things about the story, the mooks you encounter in stages spread gossip with you, and your sidekick is a cowardly windbag. I wasn’t too amused by the dialogue, but I also never found it annoying either.

My only real complaint about the game is its cost, which is full-price for both its platforms, the Playstation Vita and Nintendo Switch. While I can tell there’s some replay value here in redoing the stages to try and get a maximum rank, and recruiting more monsters to make armor or statues, it may not be a Disgaea situation where you’ll get a ton of bang for your buck. It’s still a fun game, but whether you find that a fair price or not will probably depend how much of a fan you are of this style of gameplay, and maybe how appealing you find the gimmick. Still, NISA is no stranger to sales so there’s no harm waiting on it. 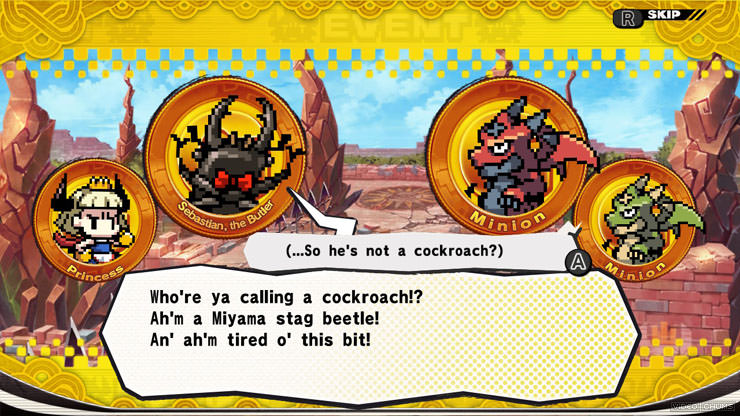 Overall Penny Punching Princess is a simple game that does what it wants to do pretty well. The combat is satisfying and controls well, the presentation is nice, and it’s nice to still see sprites around in games. I give it a save.