Metropolis: Lux Obscura is a short, but interesting “Match 3” game with an amazing comic style look and a somewhat interesting story to tell. Note: the art in this game can sometimes be of a sexual nature.

After being wrongfully imprisoned, Jon Lockhart returns to his city to search for his friend’s murderer. While completing jobs for the local gang boss, you face many enemies, all of which you are able to beat by winning a round of Match3.

Right from the start, this game really makes an impression. The music grabbed my attention instantly and when the comic-book-like art started to appear, I was really excited to play. After pressing the Play button, you are given four empty save slots. I usually don’t care about save slots, but they actually do come in handy in this case (I’ll explain more about it further down).

When you start playing, the tutorial guides you for about ten minutes. During that time, you get to discover some of the story, ask people some questions and see what the mysterious town is all about. The quality of the story is somewhere between good and mediocre. It does fit very nicely with the noir atmosphere of the game, however.

There are four possible endings you can experience in Metropolis – hardly any of them could be described as “good endings”, but I don’t want to spoil too much here. Multiple endings are also why you might actually want to use the available save slots. Different endings can be achieved by visiting different locations, although you don’t have much choice most of the time. 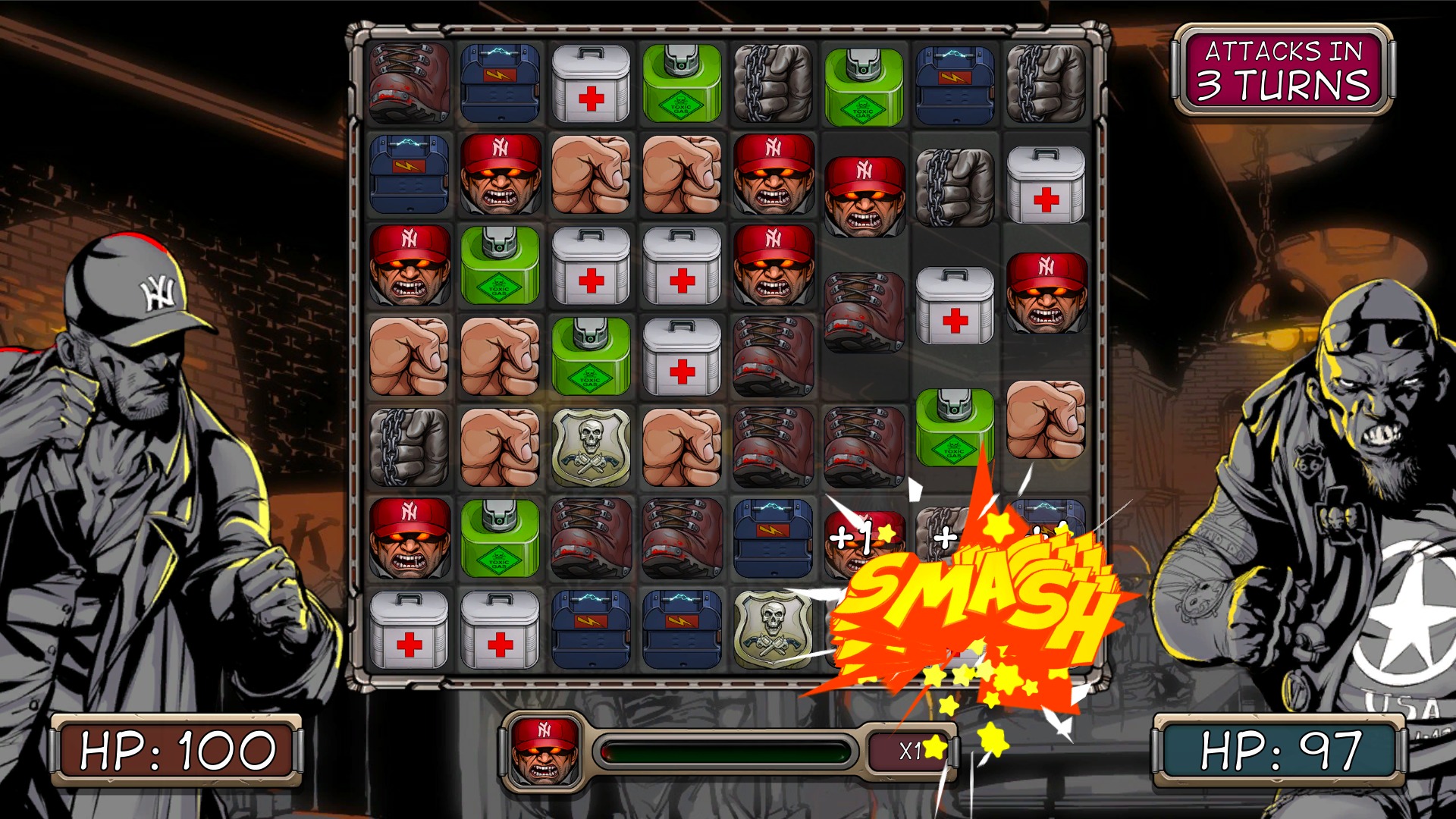 Since you can manipulate the outcome during the gameplay, this adds to the replayability value a lot. I played the game twice in total and I although I can’t say I want to play much more, a Match 3 fan should have no problem finding the game fun enough to play it a few more times. I also want to mention at this points that this game is really quite short – the two endings I reached took me about an hour and fifteen minutes. If you expect hours and hours of fun playing puzzles, this is probably not the game for you.

Playing Match 3 (or Connect 3) is what will occupy about 50% of your total playing time. The game-board is much more colorful than the rest of the game for some reason, but it still kind of fits the overall theme. The goal is to kill your opponent before he does that to you. You can perform actions by lining up at least three equal icons in the same row or column. Some icons damage the enemy, some heal you, some make your next moves stronger and some can even damage you if you’re not careful enough. Depending on the enemy you’re fighting, you are damaged for some amount of HP every 1-4 moves made.

Some enemies are extremely easy are some are just a real pain to deal with – this also depends a lot on your luck and skill. If you happen to lose all of your health, you are thrown into the Main Menu and have to play the same round again. If you win, you get to pick from one of the four power-ups (those usually make you stronger, make health packs more efficient or something like that). 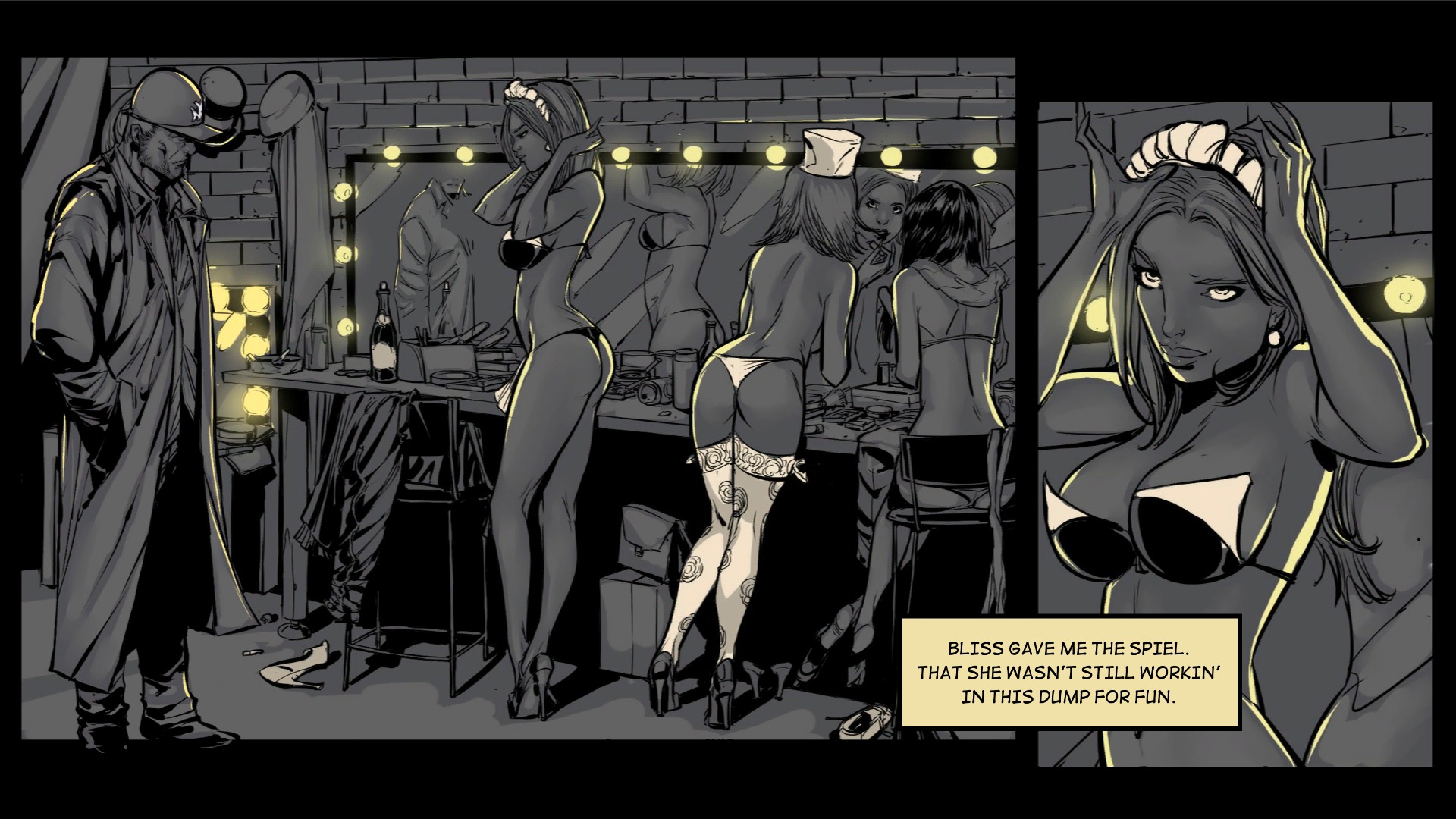 Now let’s get to the artistic side of the game, which in my opinion is the biggest upside. The story is presented through a series of pictures in a comic-like way, along with the obligatory speech bubbles and WHAMs when someone gets punched. The sound effects really fit the game. I also can’t say anything bad about the music they picked – it makes the Match 3 rounds very exciting to play. The game is also fully voice acted, which is a really great thing. Some scenes feature adult stuff (specifically bare breasts and dirty talk), which I’m not really sure was necessary, but it’s not something that would bother me personally.

There are also some flaws, but they’re not game-breaking. I did notice some grammar mistakes, mostly some occasionally incorrect punctuation. I was also bothered by the fact that the speech bubbles are sometimes a second or two late compared to the voice acting.

I also discovered a bug which helps the player win when their HP is very low. I mentioned before that the enemy hits after a certain number of moves you make? Well, if you are supposed to take damage after the next move, you can try to be super fast and also match a health pack before you take damage. This helped me cheat death on more than one occasion. Although I’m glad I didn’t have to play those rounds all over again, this is still a bug that needs fixing.

This game features eight Steam achievements, some are related to the story and the others to the Match 3 part of the game. Apart from Windows, you can also play this game on that expensive aluminum thingy of yours or make your inner penguin happy by using Linux, if you so desire.

Despite the short playtime you can expect to get from this game, I can recommend Metropolis: Lux Obscura for its artistic value. I enjoyed playing it and I never imagined Match 3 games could be so thrilling. I still can’t completely decide whether the $8 price tag is justified or not; while you certainly won’t play this game for many hours, the art is perfected in a way that makes me feel like they’re not asking for much. This is up to you to decide, but if you see the game discounted, consider spending your money on it.