ARTICLE: I upgraded to a PS4 Pro and I love it
Add comment
Share:TwitterFacebookRedditPinterestWhatsAppEmail

ARTICLE: I upgraded to a PS4 Pro and I love it

Dun Dun Dunnnn…Time to Upgrade Your PS4 to a Pro?

On April 20th, 2018 I traded my slightly older than one-year old PS4 Slim for a PS4 Pro.  I wasn’t planning on it, but currently it just made sense to me.  I bought my PS4 Slim in Jan 2017 and have about 30 titles plus a few dozen digital ones. So, I’m deep into having a library at this point. What prompted the upgrade? God of War is a big reason as it will likely go down as one of the best games of a generation and I’m loving every minute of it.  But that wasn’t only on mind when I decided to make the switch.

For some reason Gamestop was offering $175 cash for my PS4 Slim. Yeah, that is kinda insane, but it was true.  I had bought my PS4 Slim Uncharted 4 bundle used for $185 off Amazon back in 2017, scoffing at the PS4 Pro as being useless because a PS5 would likely come out in a year. Recent news seems to have tossed that idea out the window as it appears mid-generation updates are here to stay and the PS5 won’t be coming out until 2020 at the earliest.  With that in mind, a $399 God of War bundle looked really good and it just made sense to trade off my PS4 Slim while the $175 offer was available. Plus, my controller was a bit wonky and I needed another one anyway.

I slept poorly the night before I bought it.  Tossing and turning, debating whether I need a new PS4 Pro or not, my finances are not exactly a cornucopia of overflowing wealth.  Then I would think, I’m never going to get another offer for my current PS4 Slim like this, even if I try to sell it on Facebook or Offer Up ( does anyone even use Craigslist anymore?).  I woke up about two hours earlier than usual that day.  Looking online, I could see places like Target selling the God of War bundle, which had been sold out for pre-orders everywhere I looked, with a mention of only three more left at the store just down the road.  I tried to stave my temptation off, saying I’ll get through all my work first before I check on the bundle again.  Well, I lasted till noon and then I looked on my phone and it said there were two left.  I drove down, partly because I was supposed to pick up a birthday gift for my son and partly because I told myself that if it’s there I will get it and let fate decide for me.  I walked into the store, saw a fellow looking at the game center with the new games and then watched him call over a salesman.  I thought that might be the end of it, fate had made it’s decision.  However, the salesman grabbed a copy of God of War for him, and he walked away.  Then I got to the glass doors of the display case myself. There was exactly one God of War bundle left and every single copy of the God of War game was sold out on the counter.  I stared at it hard.  Do I need it?  Do I want it?  Is it a good time?  Should I, should I not?  Am I wasting my money?  All those questions ran through me.  Then, I rose my hand and called the salesman.  He gladly opened the case and took out a bundle for me, commenting on how this console looks so good and he wishes he could get one right now.  I nervously laughed, smiled, and told him I hope it’s worth it for 4K.  He rang me up and I walked out with the last stocked God of War bundle at the Target on my side of town.

As soon as I got home, I rushed to my PS4 Slim, hooked up the Pro, and began to transfer the save files via Ethernet.  It was a painless process and I had uninstalled the games on the Slim before I did the transfer to speed things up.  It finished in just a few minutes.  Next, I did a full two hour wipe of the PS4 Slim and loaded up the controller, HDMI cable, USB cord, and controller into a box to dash down to Gamestop before they changed their minds. Two Gamestops had denied me the trade-in special with some made up excuse even though it was blatantly on the website with 24 hours until the offer expired.  The third Gamestop I called said the offer was valid and that is where I headed.  When I got there I saw several other PS4’s had been traded in, all of them the original ones.  I was the only Slim traded in and they accepted the trade for $175 cash without blinking an eye.  Then the clerk at the register had said even his manager traded his in that very same day, which gave me a good chuckle.  I felt like a champ, got the upgrade, transferred it all in, sold off the Slim, and even got to keep my Uncharted 4 game.  Now I just needed to see how it looked, I hadn’t gotten to that part yet.

I have a non-HDR 4k TV, purchased about a year ago when my 1080p TV developed a black vertical line in the center.  I wasn’t sure how it would look, but on my 4k Samsung it looks amazing, I mean just night and day compared to 1080p. Without 4k, I doubt the results would be as drastic, but on 4k it is the absolute way to go.  I tried Assassins Creed Origins first since I was playing it on PS4 Slim earlier and it would give me a good baseline for improvements.  The game literally came to life like I had not imagined it would.  It was akin to getting a new pair of glasses when you thought the old ones were doing the job well enough. Details are substantially richer and edges, shadows, and lighting as well as water spray and sand are sharper and crisp. It’s not 60fps, but it is a good improvement that makes it much more enjoyable to play.

God of War is jaw dropping gorgeous and I’m playing in resolution mode rather than performance mode. There have been a few drops in FPS here and there, but I noticed some of them got patched out as I started over again after a few hours to try and get all the collectibles.  If there is a game to buy a PS4 Pro for, it’s God of War.  I don’t think a game like this has ever used lighting and texture to such a strong degree and the pacing and combat is an absolute joy to play, especially on Challenge mode.  The controls are fluid and enjoyable, even on resolution mode, and attacking and moving is pretty amazing.  That said, I think I may try the performance mode if I can’t move the camera fast enough while I am dodging and moving to and fro.  It hasn’t been an issue yet, but from what I hear it eventually may become one.  Altogether, It was well worth the trouble to get this upgrade.

Now some people love the new God of War console and some hate it. I’m in the middle as I like the silver color and axe drawn on it, but not I’m not much for the gold paint here and there. That said, it looks like some sort of Ikea art rather than a PS4 and I’m quite happy that it is not another black box in my bedroom, I have enough of that going on already.

I noticed the Pro fan is s bit louder than my Slim and gives off a ton of more heat. I made a little wooden stand out of an Ikea candle holder to allow air to move about it better. If you get a Pro, make sure it is well ventilated.  I’d be concerned if there was very little room around the sides or it may overheat. 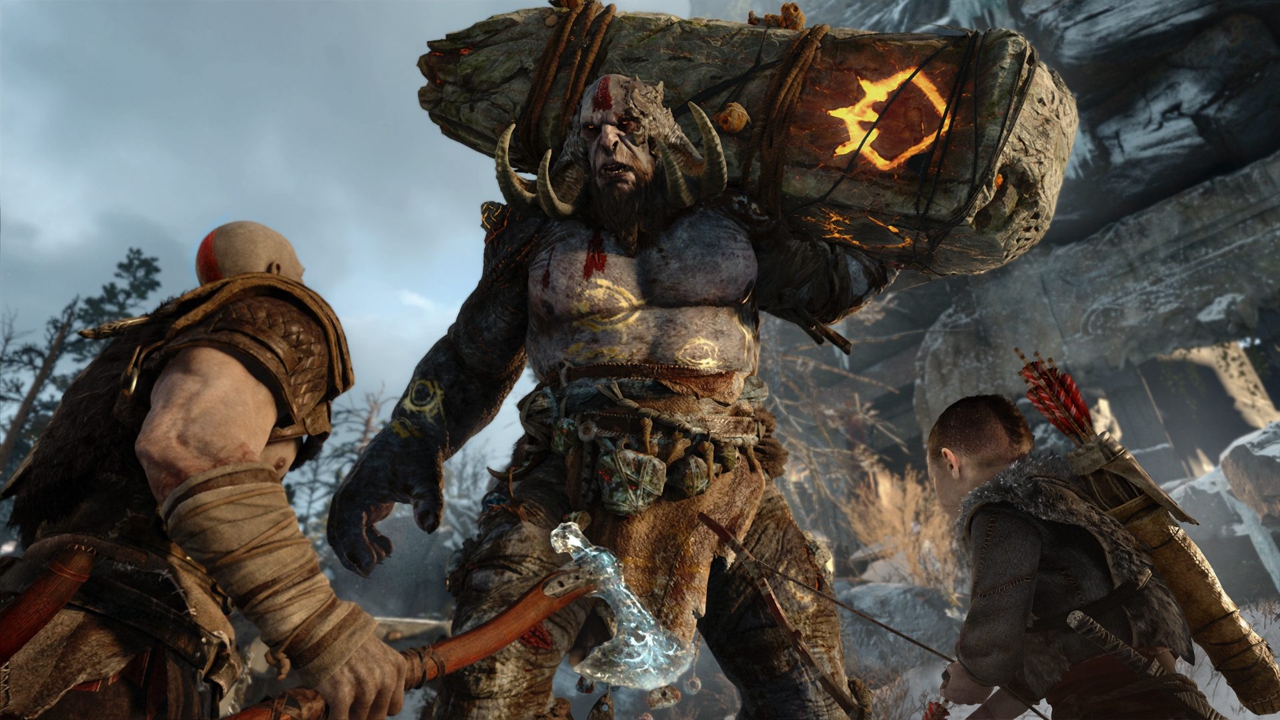 So far, I’m really happy with the Pro. If you don’t have a PS4 and are thinking of a 4K TV, don’t consider a Slim just get a Pro game bundle. I can’t say those with a 1080p are substantially better off with a Pro unless they are entirely concerned about better framerate with the Boost Mode it has for non-Pro optimized games.  Super sampling would likely sharpen things a bit on 1080p too.  On 4k, though, it’s a generous improvement.  Also, I believe it upsamples my Blu-ray’s to 4k, which is a nice bonu, and it plays 4K Netflix, Youtube, and Amazon apps. For those looking at a PC upgrade instead, if you get a 1060 card or better you will beat a Pro hands down, so for those interested is higher resolutions at very-high to ultra settings and rock solid 60 FPS or better, a PS4 Pro is not what you will be happy with. That said, if the Sony library has been itching at you for awhile, I don’t think there has been a better time to own a PS4 than right now and the Pro will be a great way to enjoy gaming with it.  If you are able to trade your old PS4 in for close to $200, I think it’s a good upgrade to have and will likely last you through 2020 or later if you are like me and hold off on a new PS console until it’s bundled with a good game.