REVIEW: For The King

For The King is an excellent and deep fantasy roguelike RPG, one of the best I’ve seen in the last couple of years. It is very fun either playing single player or co-op, and will be the joy of any enthusiast of the genre thanks to its high challenge ratio.

For The King is a roguelike turn-based hex RPG. The lands of Farhul are in turmoil after the death of the King, perpetrated by mysterious forces. Queen Rosomon proclaims that dark times are soon to come, as the Forces of Chaos are awakening again and want to bring destruction and death to all other races. So, a small but brave group of heroes is tasked with the arduous quest of stopping the Chaos Menace and bring peace once again to the reign of Farhul. In this quest they will not be alone, as various other characters will help them through this adventure, but the most important of their allies will be Destiny itself.

A Roguelike game in the purest form, For The King blends strong RPG elements with well-written dialogue, varied situations , and randomly generated worlds for each playthrough.  This leaves the good or bad outcome of each run to partially rely on the ability of players as well the hands of fate itself.

General Gameplay
After starting a new campaign, single player or co-op, you will be able to edit the class types and appearances of the characters composing your party. At the start, the classes available will only be three: Sorcerer, Hunter, and Blacksmith.  However, these classes will increase in number once you unlock more through multiple adventures. After briefly editing and choosing the difficulty level from the four available options, the adventure starts. The main quest you will be given will always be the same as well as the locations you have to reach in each playthrough, that never changes.

Movement on the map is made by taking turns for each character, as they roll a certain number of movement points for each turn.  These correspond to a number of Hexes the player will be able to move through. Factors such as class, equipment, terrain and eventual bonuses will also influence movement. Once a location of importance is reached (cities, dungeons, events, enemy camps, etc.) just clicking on it will be sufficient for interaction and therefore triggering the consequent event or fight. Characters in the party move independently and will be all involved in the same fight or event only if they are close enough to it when it happens. Characters being ambushed by enemies while alone, maybe coming back from shopping at a city, is a common occurrence for example, especially at night.

When interacting with events in the game world, characters will have to overcome tests based on different statistics relative to the context. Lifting a boulder to get treasure will be a strength test, while using an arcane devise will be an intelligence test. Characters with higher statistics will of course have a better chance to roll successes, but they can also use the Focus system to have an additional bonus. Focus is a certain amount of automatic success rolls each character has, and they can spend them freely in either combat or events. Focus recharges after some time or with items.

There is also a good amount of Progression in each playthrough. Characters gain levels from experience gained by defeating enemies, completing quests, and random events. Leveling up however does not involve skill trees, statistics, or other such things. It just means more Max HP, a general increase in statistics, and that’s it.  There is no customization for how characters level up. Instead, you can customize their equipment divided into categories of  weapons, armor, helmet, boots, accessories, and usable Items. Each class has its own specific type of weapons and gear that only they can use, so buying and equipping the right items is important.

Permanent progression, fundamental in Roguelikes like this, is realized in a rather unique system in For the King .  Throughout your adventure you will collect special Tomes containing the lore of Farhul. These will be permanent once you acquire them and function as a sort of currency to buy things at the shop in the main menu. This shop does not sell gear, but instead sells encounters, quests, weapons to find, NPCs, and events to add to the game in future playthroughs. Basically, the more you play and advance, the more Tomes you will get and the more game content you will progressively unlock. This system is an innovative one, but also risky as not everyone may enjoy it.

A singular mechanic in For The King is also the passage of time. As more time passes, the more events start happening in the world. Everything appears and disappears with enough time passing, even quests. Chaos is also a factor increasing with time. As the evil forces gain power it can be diminished by certain events and quests.  Generally, it is a good idea to keep it low as the higher it is, the stronger enemies will become.

Overall, the gameplay of For the King is deep, complex, satisfying, and most of all challenging at higher difficulties. The only remark I can make is that the way a playthrough goes sometimes is often bound to how much luck the player has. If RNG favors you, you will get pretty far and in good shape. Otherwise, if fate is against you, a devastating series of bad events will swiftly put an end to your run. But I suppose that is the nature of this genre to an extent.

Combat System
The combat in For The King is a classic turn based formula. The maximum number of fighters is 3v3. Based on their initiative, each character will act in a determined order. As far as complexity goes, we have on our hands a pretty solid and adequately deep combat system, featuring buffs, dodge and parry chances, several armor types (magical, physical, etc.), debuffs, status effects, damages over time, specific weaknesses to certain weapons or elements, critical successes, and failures that can even result in weapons completely breaking and be lost forever!

When a combat is won, the party will get loot, money and experience, as in any other RPG. If characters get knocked out, they will revive if they are under the influence of certain world objects. Otherwise, they can be revived using rare items or Life Points, which are basically the “extra lives” at the party’s disposal and very difficult to acquire again once spent. If no extra lives are available, then that character will die forever.  Overall, an the game has an adequate combat system that will not disappoint fans of turn based combat.

Content
Indefinite. As a roguelike game, it can go on forever, each playthrough different.

Balancing
Balancing is fair enough, but at start of a game some classes, namely Melee ones, are stronger than magic and ranged ones.  However, as you add levels and equip them that difference will disappear in time.

Challenge
This game is quite hard and complex. On the second highest difficulty we already had an hard time and each challenge before us could be the last. With four difficulties, the game will satisfy all ranges of players, from casual to hardcore veterans of the genre. 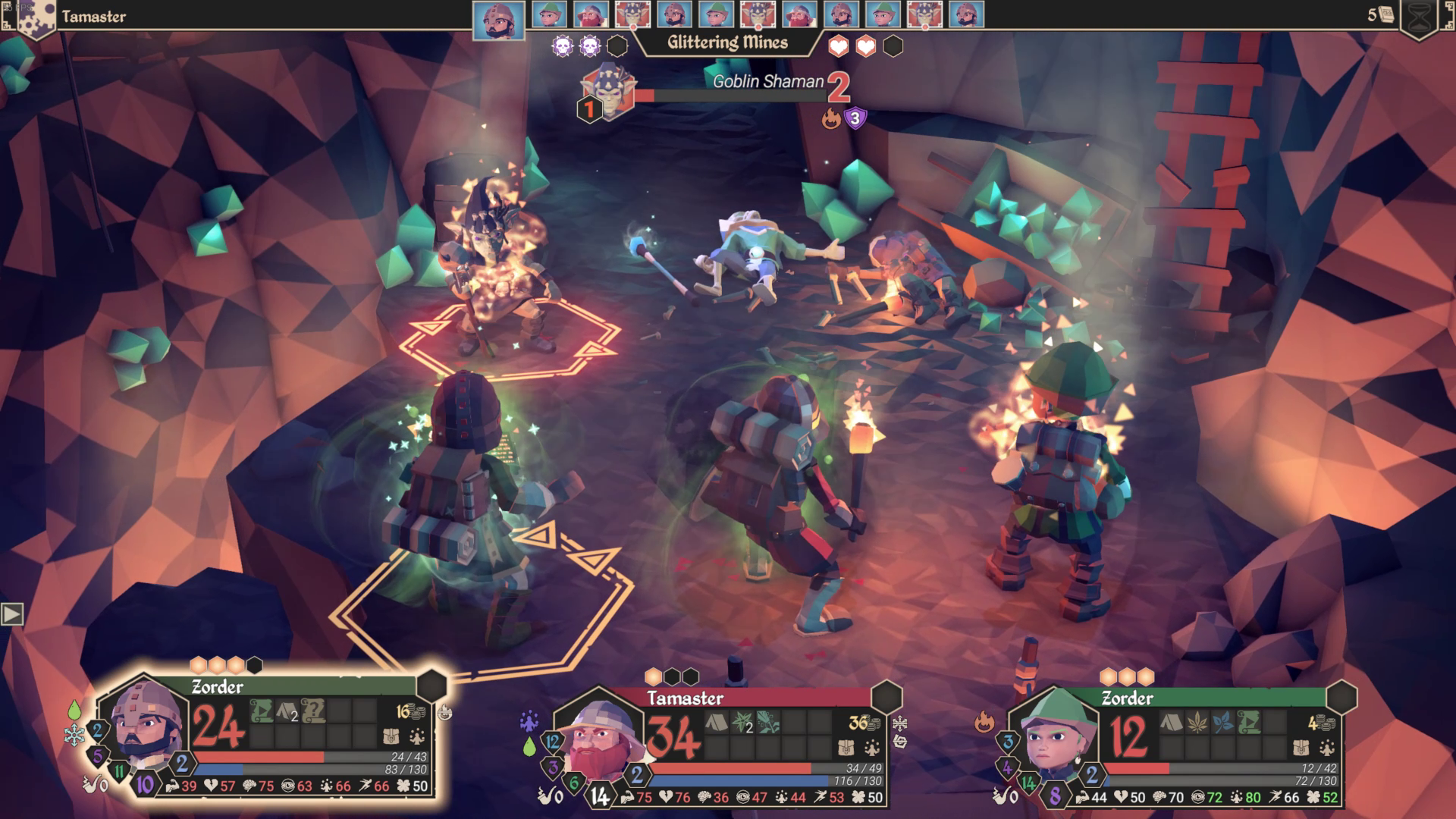 Graphics/Sound
The art style, purposefully low-poly, is beautiful and well done. effects and animations are of good quality. Overall, a visually pleasant game. The soundtrack and effects are of high quality and contribute to the immersion of the gameworld.

AI
The enemy AI will be quite smart, focusing less durable classes most of the time, and using skills according to your weaknesses. Very good.

Quality of Life/Bugs/Issues
Nothing to report. 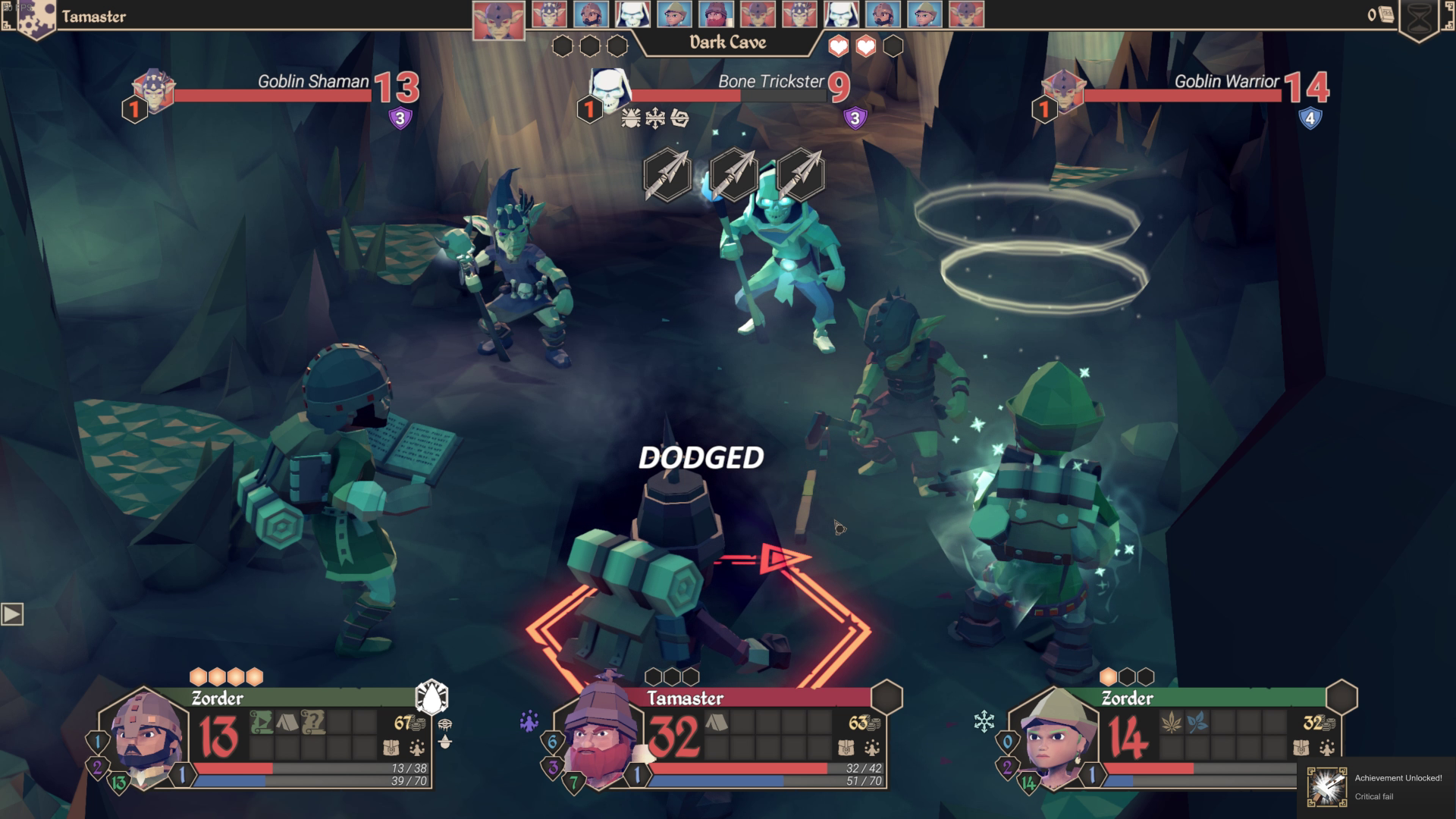 For The King is an excellent representation of how a roguelike should be done and one of the best of this genre I have seen in years. Fans of these kind of games will be very pleased.