Ever wanted to know what it’s like to climb up the back of a giant ogre whose limbs you’ve just cut off and behead it?

Extinction is the latest title from Iron Galaxy, published by Modus Games.

In this larger-than-life level-based 3D hack-and-slash brawler you play Avil, one of the last Sentinels: fearless warriors who dive headlong into battle against the giant ravenii.

The game’s introduction is told from the point of view of Avil’s companion, Xandra, but seems basically irrelevant to the game’s campaign. Xandra and Avil were both criminals and sentenced to hard labour sometime, somewhere, but through twists of fate they turned into this amazingly clever alchemist type and the last Sentinel. Go figure.

Anyway, the game starts and it’s Avil’s job to try to protect the helpless citizens from the invading hordes of ravenii (giants) and jackals (lesser enemies), who have chosen now to descend upon the world. It’s a bit of a non-sensical and disjointed story, but as long as the game is fun then that’s what matters, right?

On the surface Extinction presents itself well, with fancy menus, big musical scores, and voice work by people who sound competent. Once you begin to play, though, you quickly find the graphics look rather last gen. Levels are quite small and very repetitive. Textures and maps are bland and uninspired, as are many of the models, and that’s not helped by the cartoon-like appearance that the developers have chosen for the title. The game really doesn’t portray a fantasy world at war with hordes of ravenii and jackals at all well. It feels more like a few bland set pieces in a barely populated world, inhabited by a couple of dozen people that all look the same. 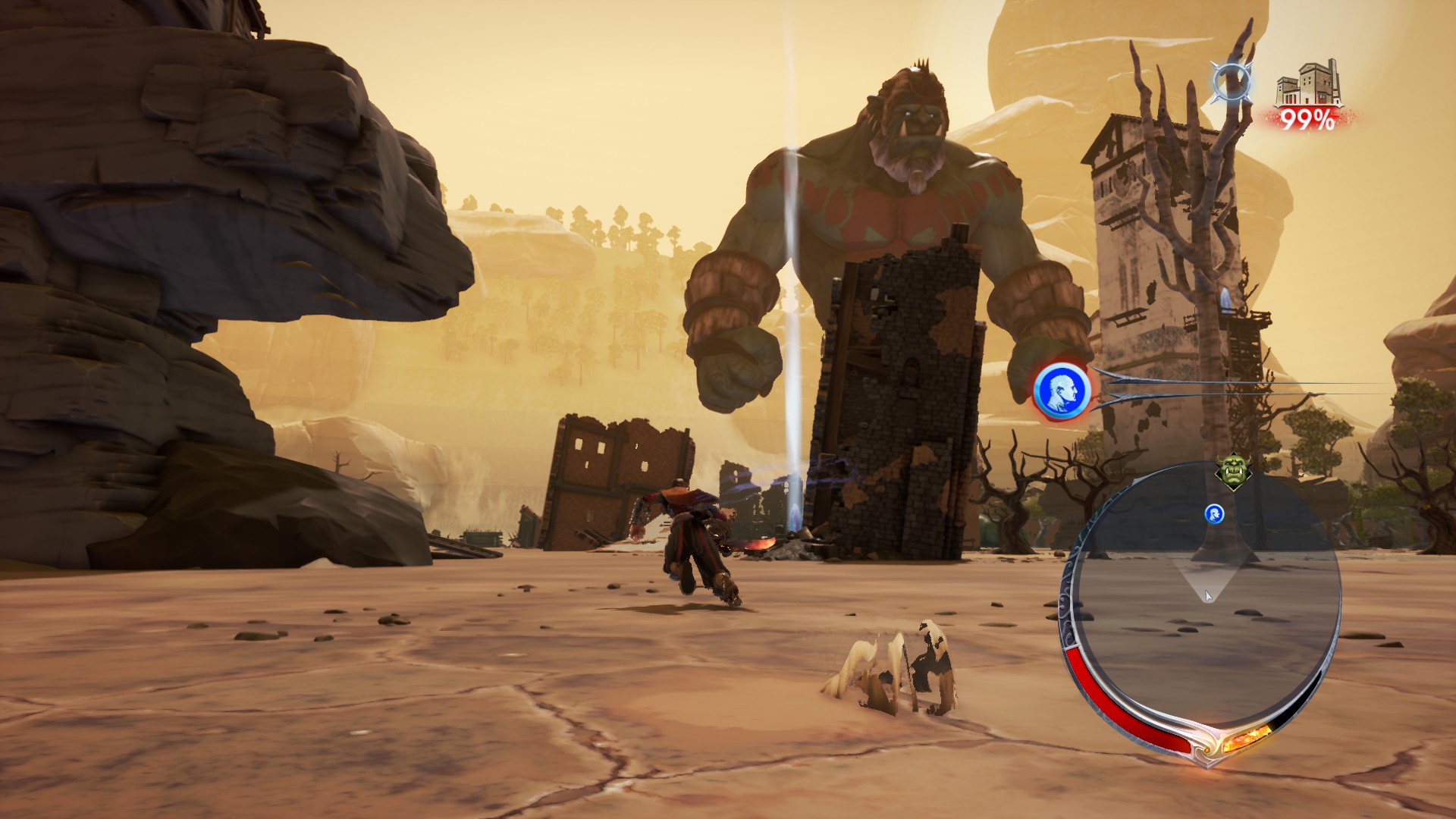 In a game of this scope you’d expect the wanton destruction from the ravenii to be particularly impressive, but it’s anything but. Buildings are swiped through like water, fading into nothingness before they hit the ground like smoke on the wind. There are no physics objects flying about or anything like that; all you’ll see is a small pile of pre-created rubble that looks the same as every other pile. Boring. 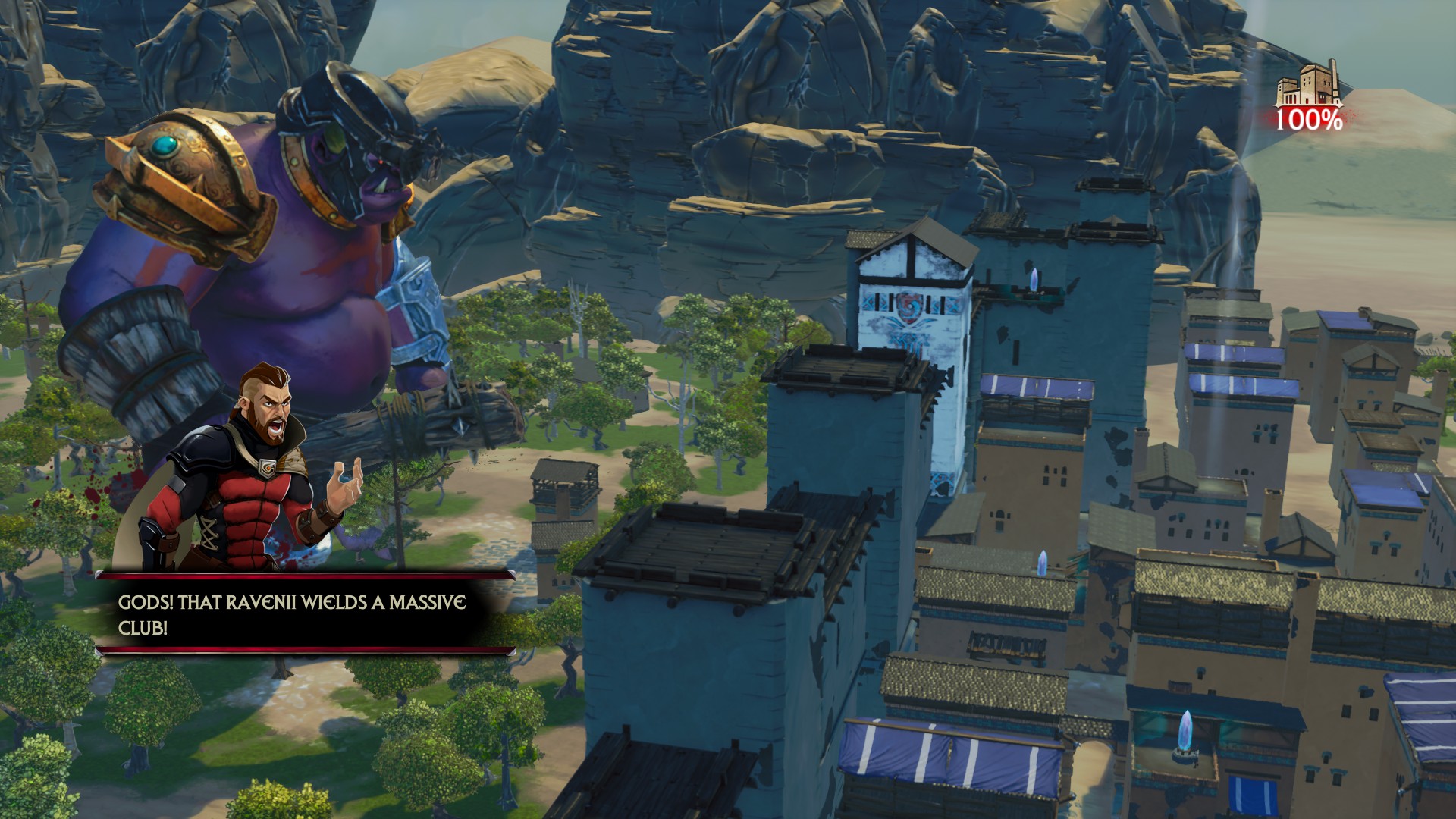 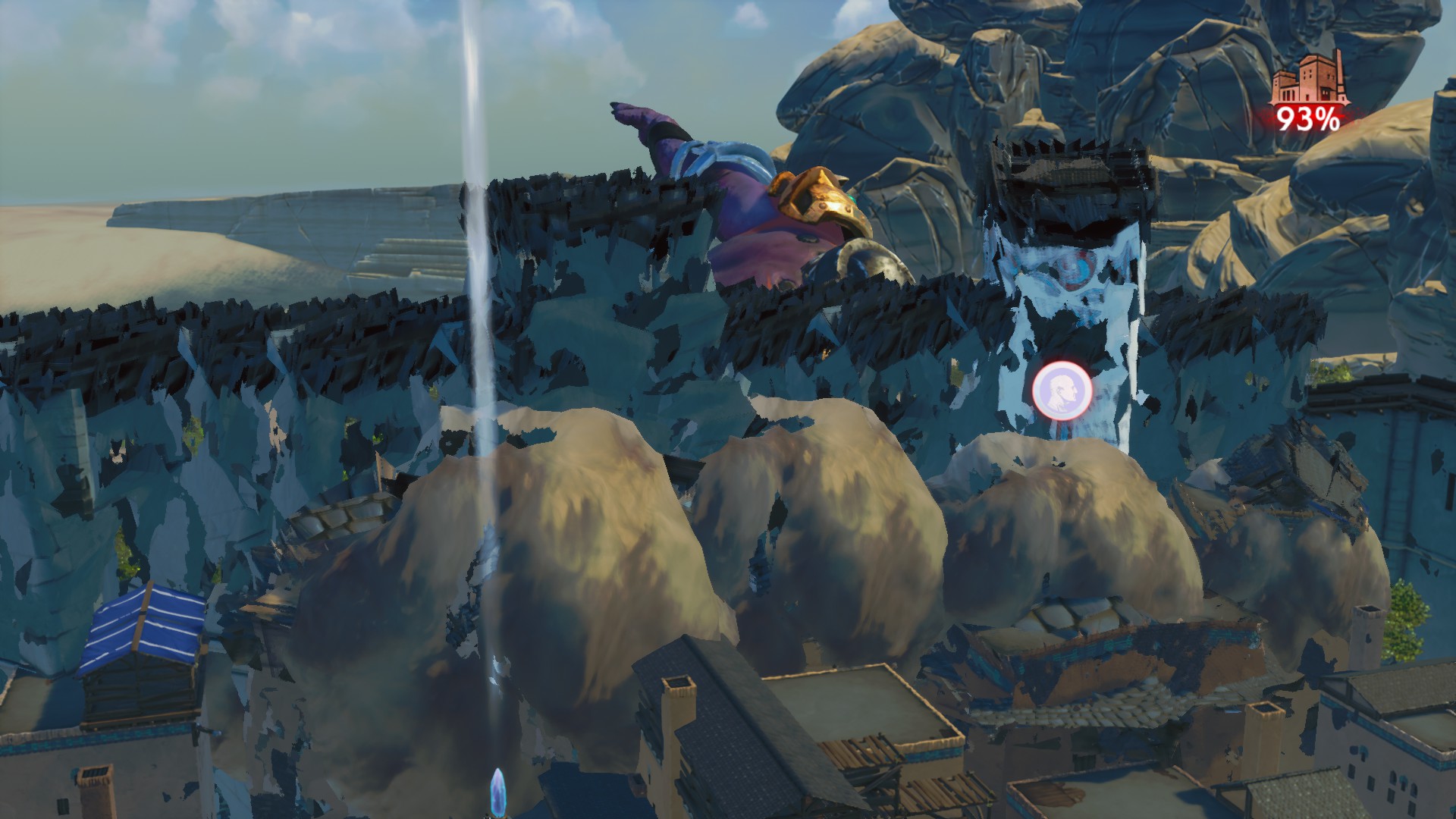 I suppose the animations and some of the special effects are quite nice and fluid when you have a chance to pay attention to them, but it still gives that last-gen vibe. 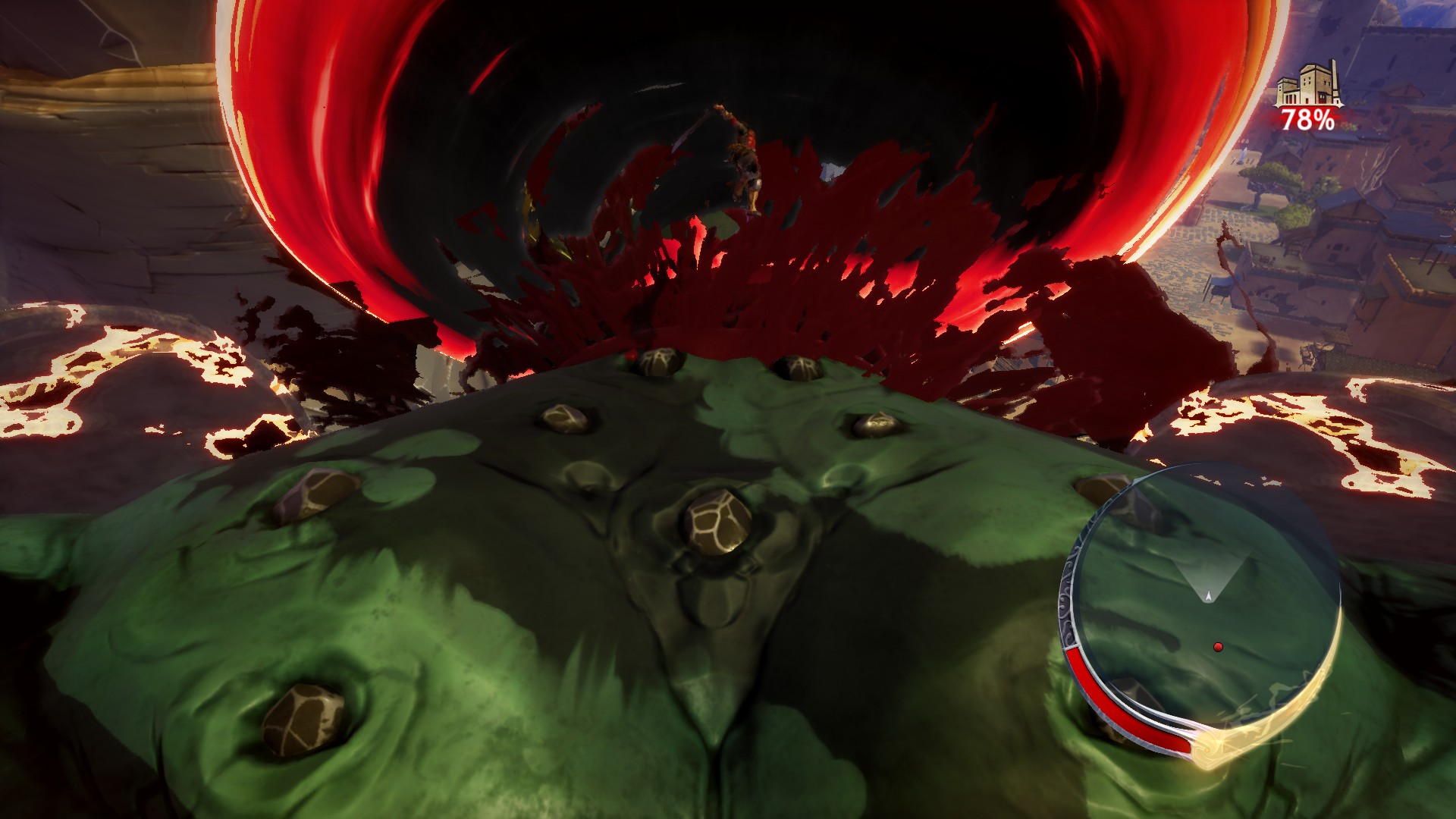 Sound is better, with good sound effects and suitable dramatic fantasy battle music, though again it seems that the developers have missed their chance to shine. The game would have been so much better with giant battle cries, hordes of ravening jackals, and Avil facing them down with his stony silence. Instead it ends up feeling pretty empty. The script is fully spoken with professional-sounding voice actors. The grammar is good, though the actual story is pretty lackluster.

There are quite a few graphics options. I’ve been playing in full HD with everything on Ultra, which runs well, but still looks a bit pants. I think some of the store page images may have been touched up; they look a lot better than what I’ve seen in game. 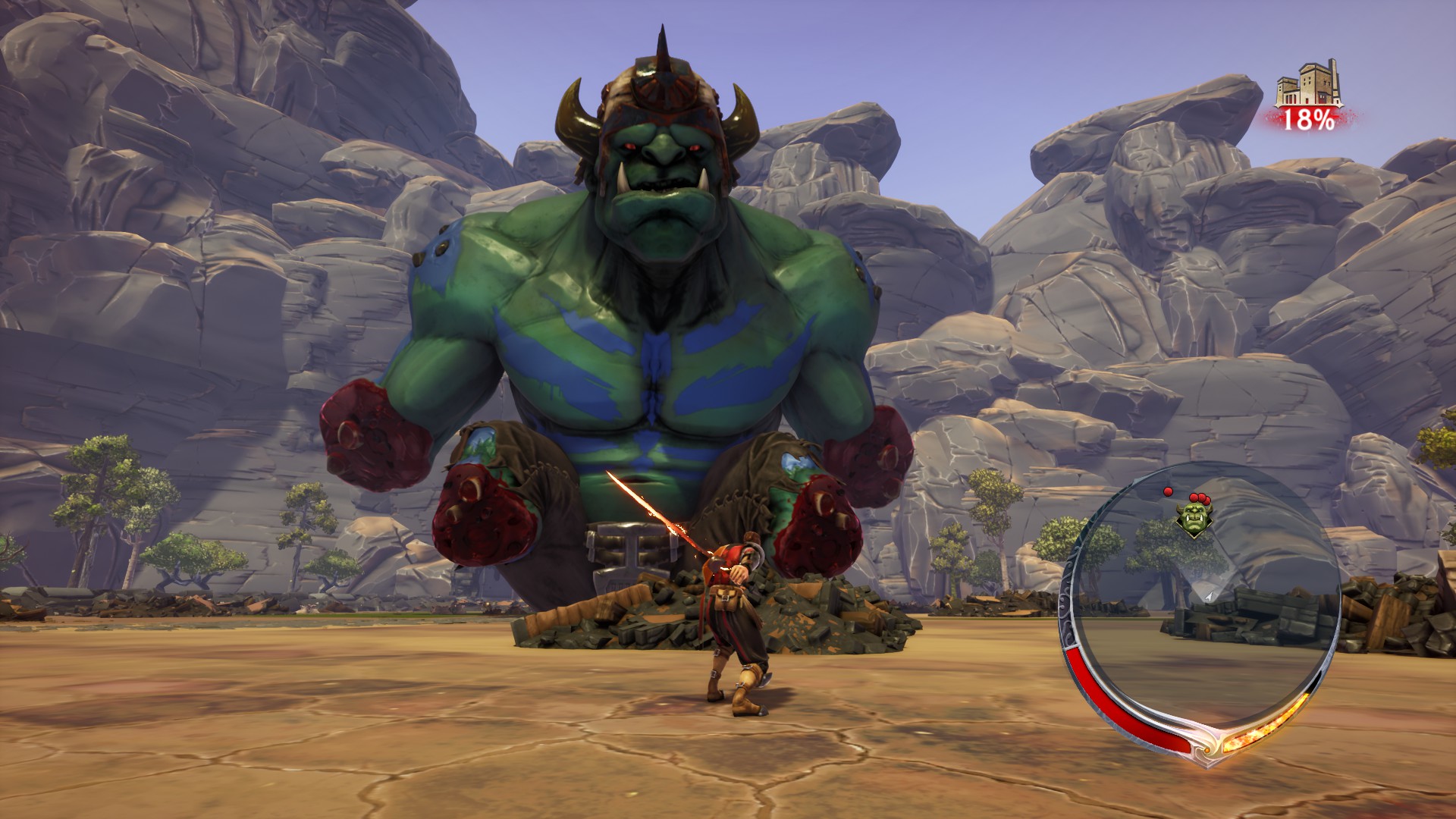 Extinction is a third-person 3D hack and slash game, which plays like any of the countless console games in the same broad genre: Bayonetta, Devil May Cry, Anarchy Reigns, and so on. It seems like it’s supposed to be very fast-paced, with missions always requiring you to dash about saving civilians and slaughtering orc-like creatures, but its gimmick is the man-on-giant combat when you confront a ravenii, and this ends up being pretty slow going. 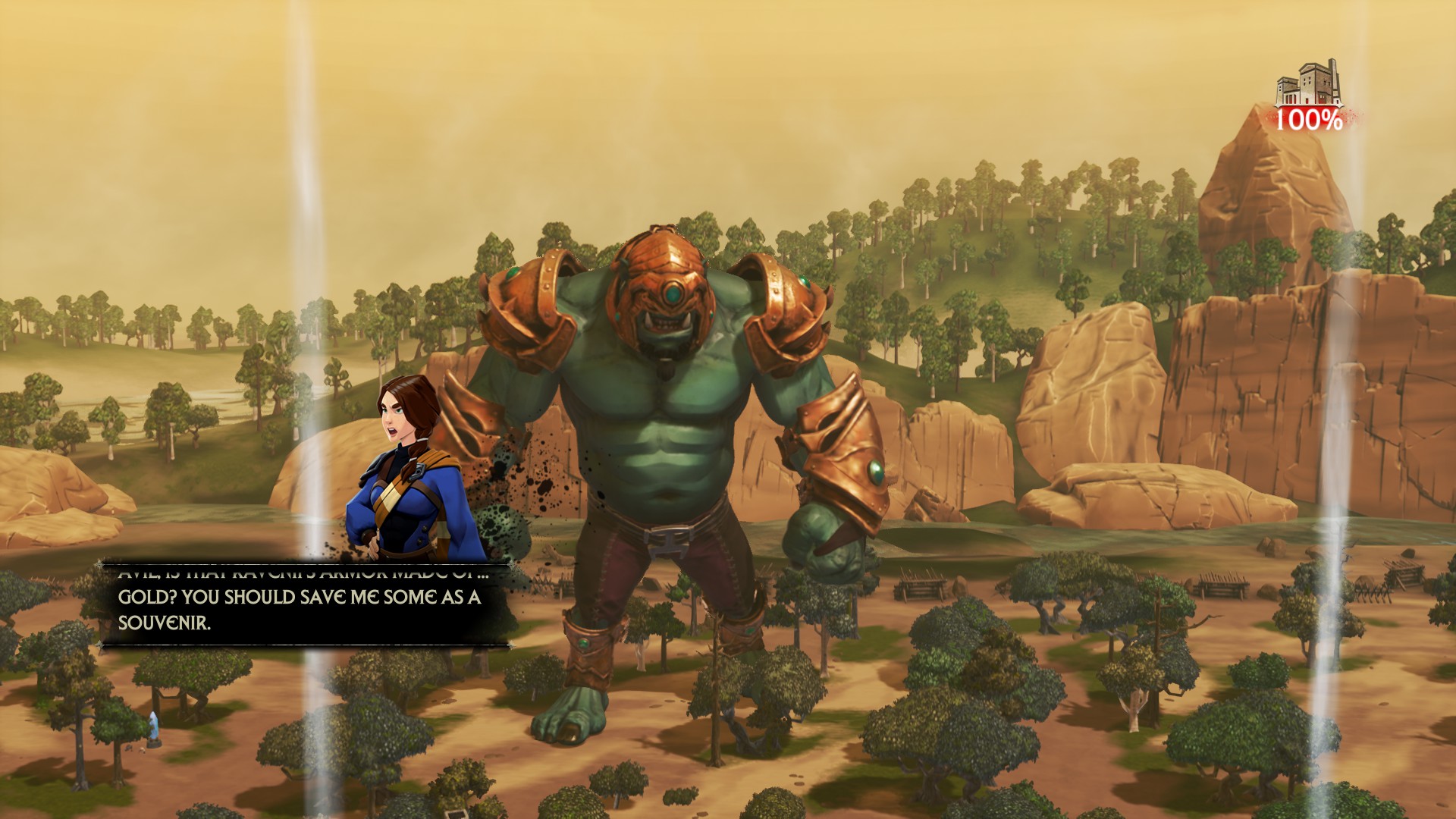 As with most games in the genre, it’s divided into a number of levels in its main campaign mode. (In spite of what the Steam tags say, Extinction is definitely not an open-world game.) Each level gives you a primary objective that must be completed to advance to the next level and usually a number of secondary objectives that grant you extra skill points. These can then be used to buy extra abilities or buff others, but there’s nothing exciting here and some of them seem to have been added because the developers thought they were cool rather than because they fit the setting. Avil can glide. Really? *sigh*

The developers have tried to make combat more interesting by introducing rune energy. This is a ridiculous concept whereby Avil can only behead a ravenii (the only way to kill them, apparently) once his rune energy meter is full. To fill it up you need to kill jackals, rescue civilians, destroy ravenii armour, or cut off ravenii limbs. So what could be a nice quick battle instead devolves into you running about collecting rune energy while an invincible ravenii trashes the town you’re trying to save. To make it worse, the map is absolutely useless for this until you’ve spent tons of skill points on it, too. 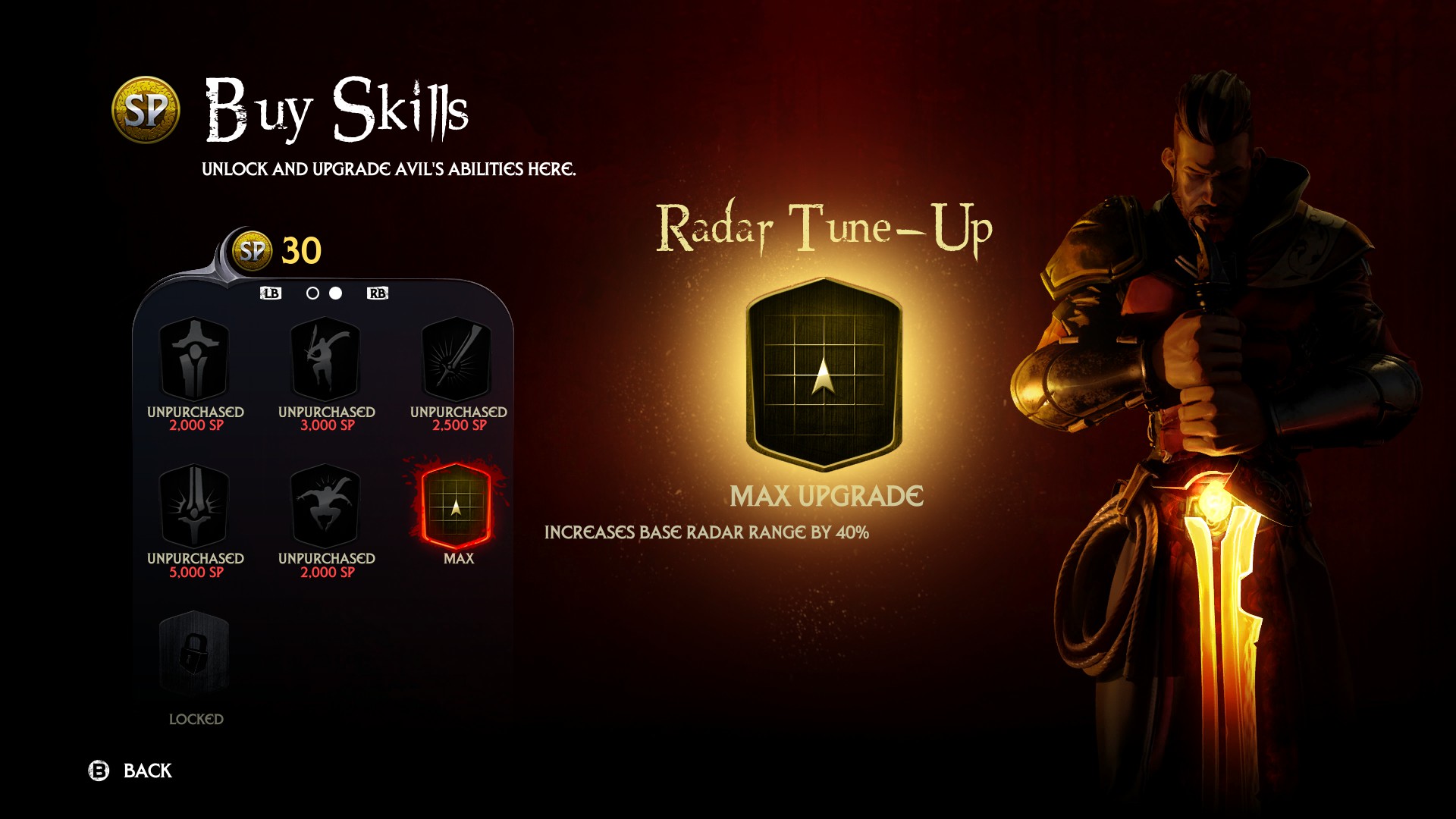 Holding down LT enters rune-strike mode, which slows down time and lets you aim a special attack. Except sometimes it doesn’t. The slow-time effect doesn’t always work properly. And other times it does work, but the game chooses to not let you target something that should be targetable, leaving you dangling in the air with no way to cancel the attack and wide open to a one-hit kill. It’s like an unreliable and less controllable version of Max Payne‘s Bullet Time. It’s horribly, horribly broken.

Mouse and keyboard controls are terrible. I played with an Xbox 360 controller and the buttons themselves were fine; the problems with the controls are more about how they’re implemented than the control mechanism itself. I couldn’t see a way to remap controller buttons anyway.

In a game like this the controls need to be tight and responsive; you need to know what will happen when you press a button or move a control stick. That’s just not the case here. The camera goes all over the place when you’re not controlling it, and when you are controlling it you can’t always look at what you want: why can’t Avil look straight up?. This makes it very hard to know what’s going on around you or to aim your special attacks.

Couple that with unreliable and inconsistent other controls — jumping, dodging, grappling — and terrain and allies that halt your movement, and the fast pace of the game becomes a huge burden on enjoyment. It’s simply not fun trying to attack or evade enemies that you can’t see, or rely on abilities that sometimes don’t work properly. 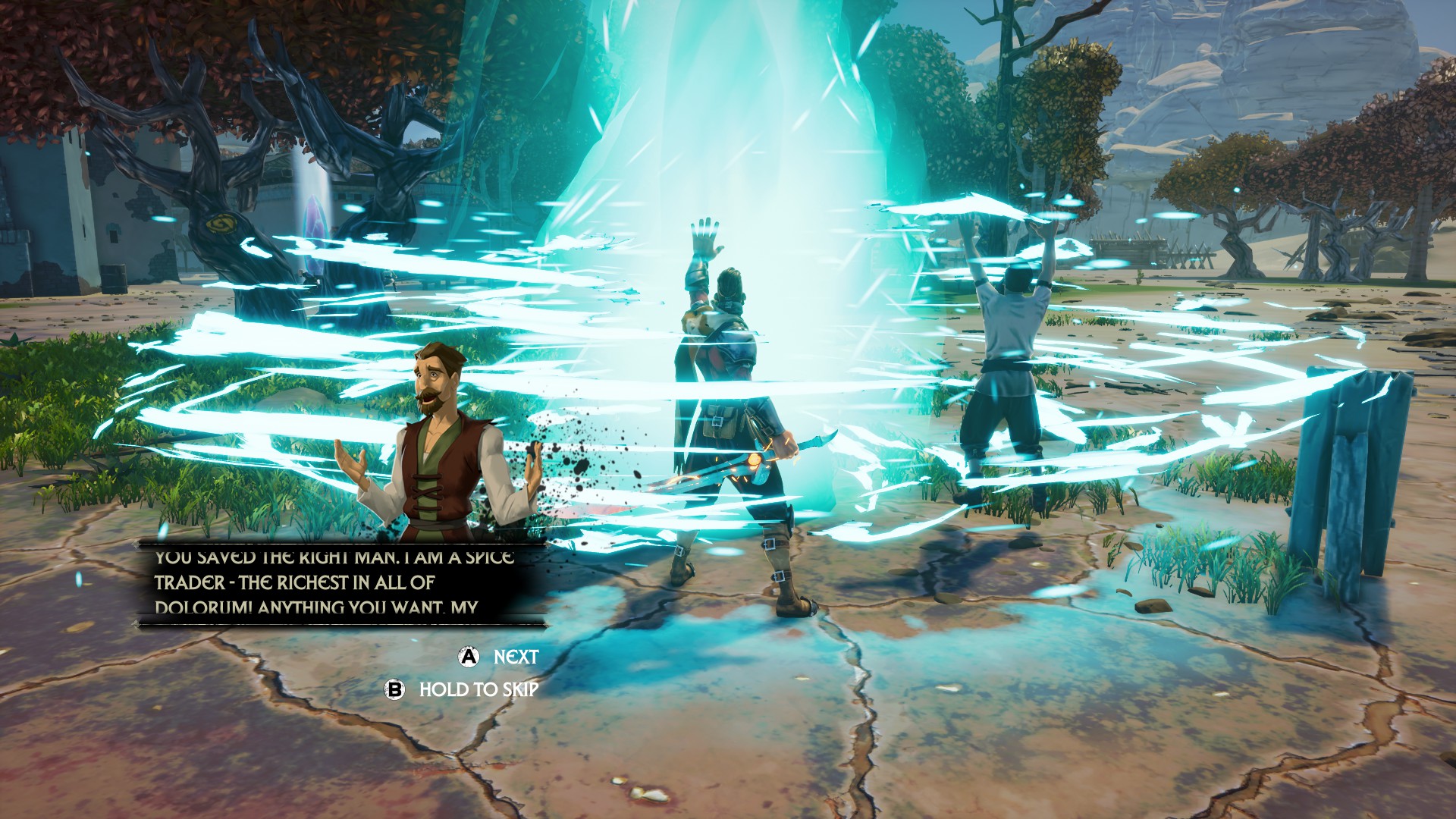 But the ‘fun’ doesn’t end there. The automatic camera never goes where you want and ravenii body parts, buildings, or terrain often get in the way so you can’t see what you’re doing. Loading times are long and some scripted scenes and dialog can’t be skipped, so it can literally take minutes to restart some missions after failing them. Oh, alt-tab doesn’t always restore the game properly, requiring a kill from Task Manager, and one of the bonus objectives didn’t work (“Kill 1 ravenii with two missing limbs”). I think they’re the only actual bugs I found, though; the rest are just disappointing design and implementation decisions. 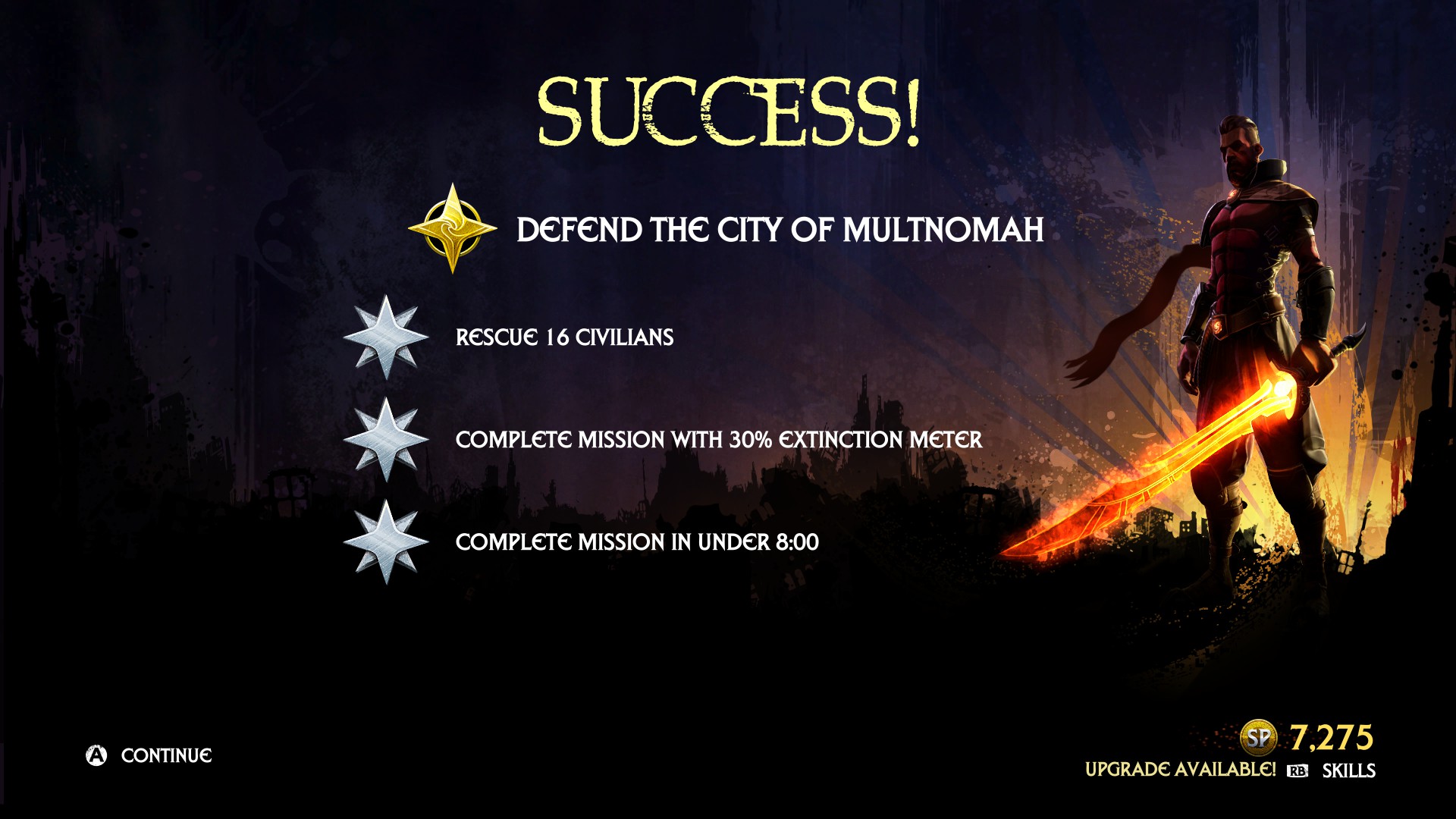 I’m disappointed in Extinction. The idea of the game is exceptionally cool, but the design and implementation are woeful. From long loading times and unskippable dialogue; through backtracking and time-based mission objectives and the ridiculous rune energy cycle; to frustrating, inconsistent, unreliable controls and a camera that’s all over the place; it all adds up to an unpleasant experience.

Add to that the empty-feeling world with unimpressive graphics, poor physics, and disjointed story with a hackneyed script … Extinction ends up being very hard to like. I’ve tried to play more of it to see if it improves, but I’m afraid I just can’t be bothered with it anymore.