If our only audience is undead, so be it. We will rock their heads off either way!

We’ve seen stories about some regular ‘ole citizens trying to survive through the apocalypse. By sheer dumb luck, being in the right group, or being smart and having the abilities to survive, they always find a way to live till the next day. But what about the musicians out there? In this particular story, we follow a band as they try to survive a sudden apocalypse. But hey, just because a zombie apocalypse is upon us, it doesn’t mean we can’t have some sick music. Perhaps you will meet some familiar faces as well. 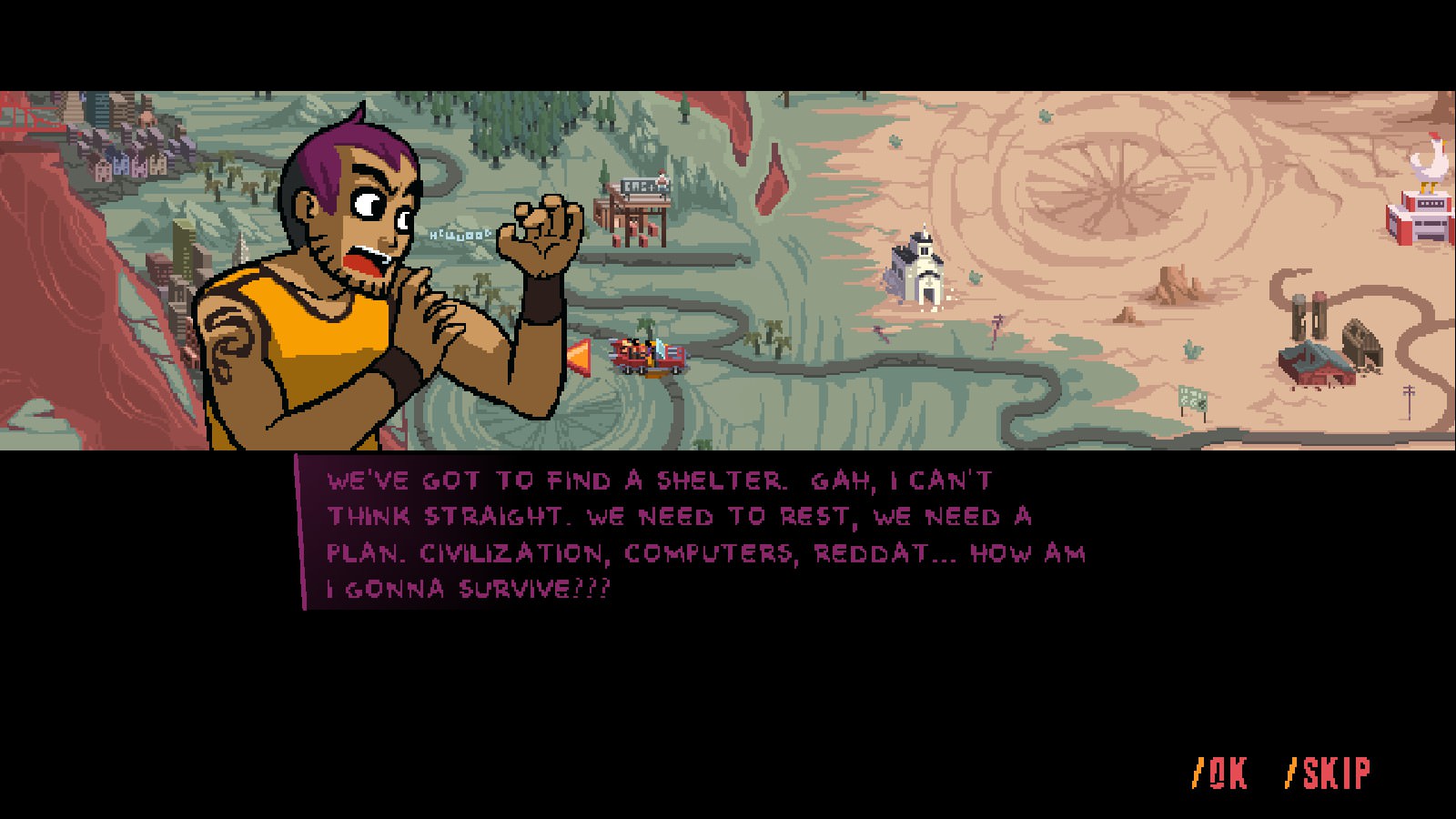 The apocalypse sure has bad timing. Zombies seem to have risen while the band, who dubbed themselves the Double Kick Heroes, were getting pumped for their performance. Without their knowledge, their whole audience is dead and just drooling for their brains. Luckily, they get out of there just in the nick of time and set out to figure out what, or who, caused the zombie apocalypse. And being the musicians they are, they saved their instruments so they will have some driving music (and well, something to do).

The gameplay is pretty easy to pick up once you know the controls. Each level puts you on the road where various zombies are chasing you. With your car in their way of your tasty brains, your health meter consists entirely of your car and your car can only take two hits. To fight them off, two guns are attached to the drum kicks towards the back of the car. The only logical way to use them is to play some songs to both take care of the zombies and have some travel music. Each beat on the track equals to one shot and as long as you hit it in the designated beat zone, you will shoot one. If you get your streak up, your gun becomes more powerful, and if you happen to have a horde chasing you, this will certainly save you. 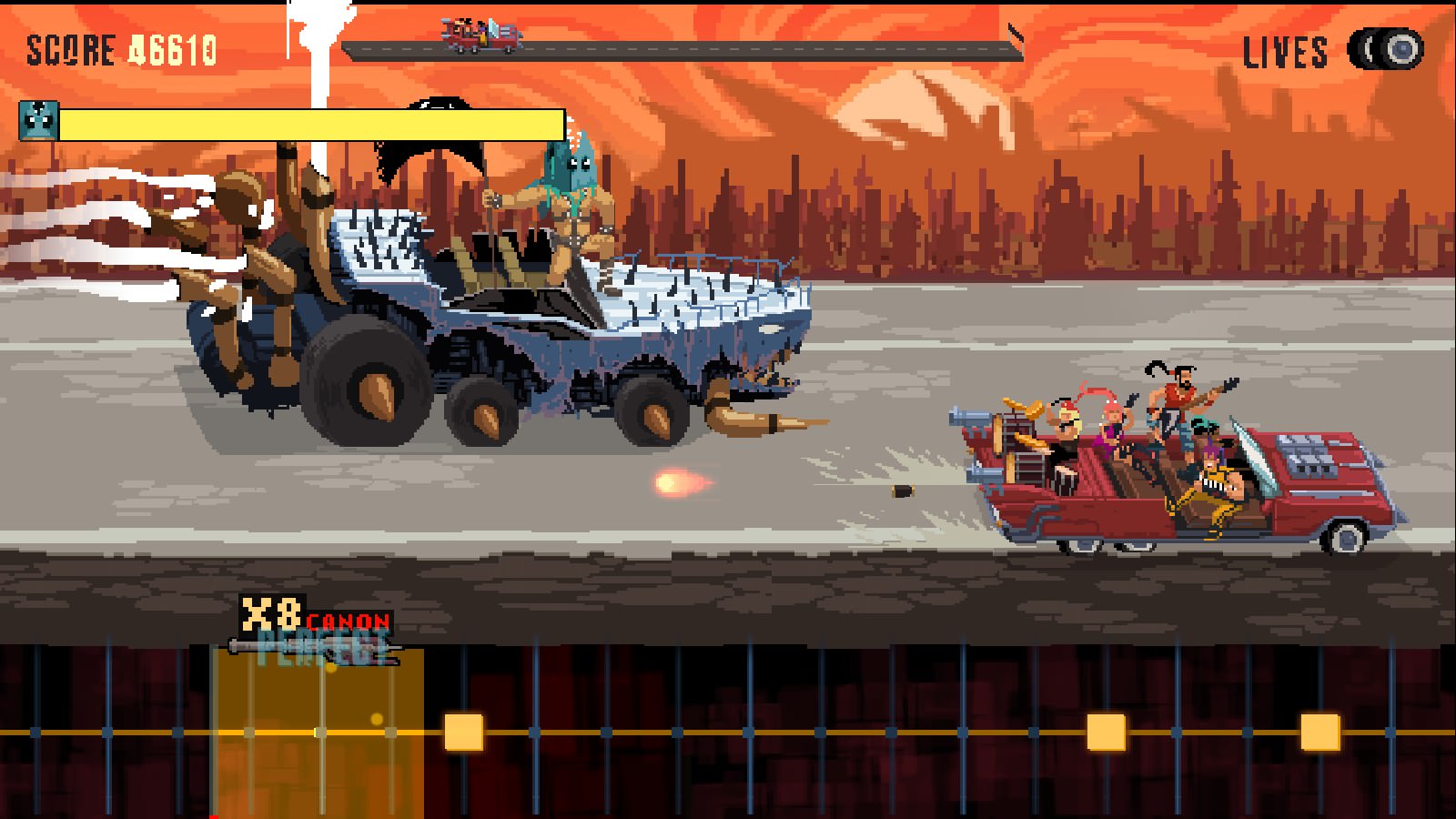 Throughout the level, the car will glide up and down the road (the only time you control it is during boss battles that focus their attacks on lanes) so in addition to keeping the beat you have to keep in mind where the car’s position is. Which drum kick you use depends on where the enemy is, so if the enemy is on the top lane, you do not want to use the kick that is aimed on the bottom lane. If you happen to forget this, the beat zone will gain a red tint to warn you that you are about to get hit. If you think you can just mash the buttons to get around the rhythm aspect, think again. If the game detects that you are mashing buttons when beats are not there, the guns not only will lose their combo but will also overheat and you won’t have any defense against the zombies.

There are five difficulty settings ranging from super easy (rock) to super hard (extreme). As you go up in difficulty, several things change. The beat zone gets smaller, giving you less area to go off beat and if you are playing on metal difficulty or above, the gun combo resets with each miss. On top of this, more tracks will be added for you to keep up with. These additional tracks will add grenades and sniper shots to your arsenal which will vastly help you as the enemies increase. You just need to build up the combo (just like you will to get better guns) to at least one line to activate it. This may seem easy, but trust me, it makes it way harder. 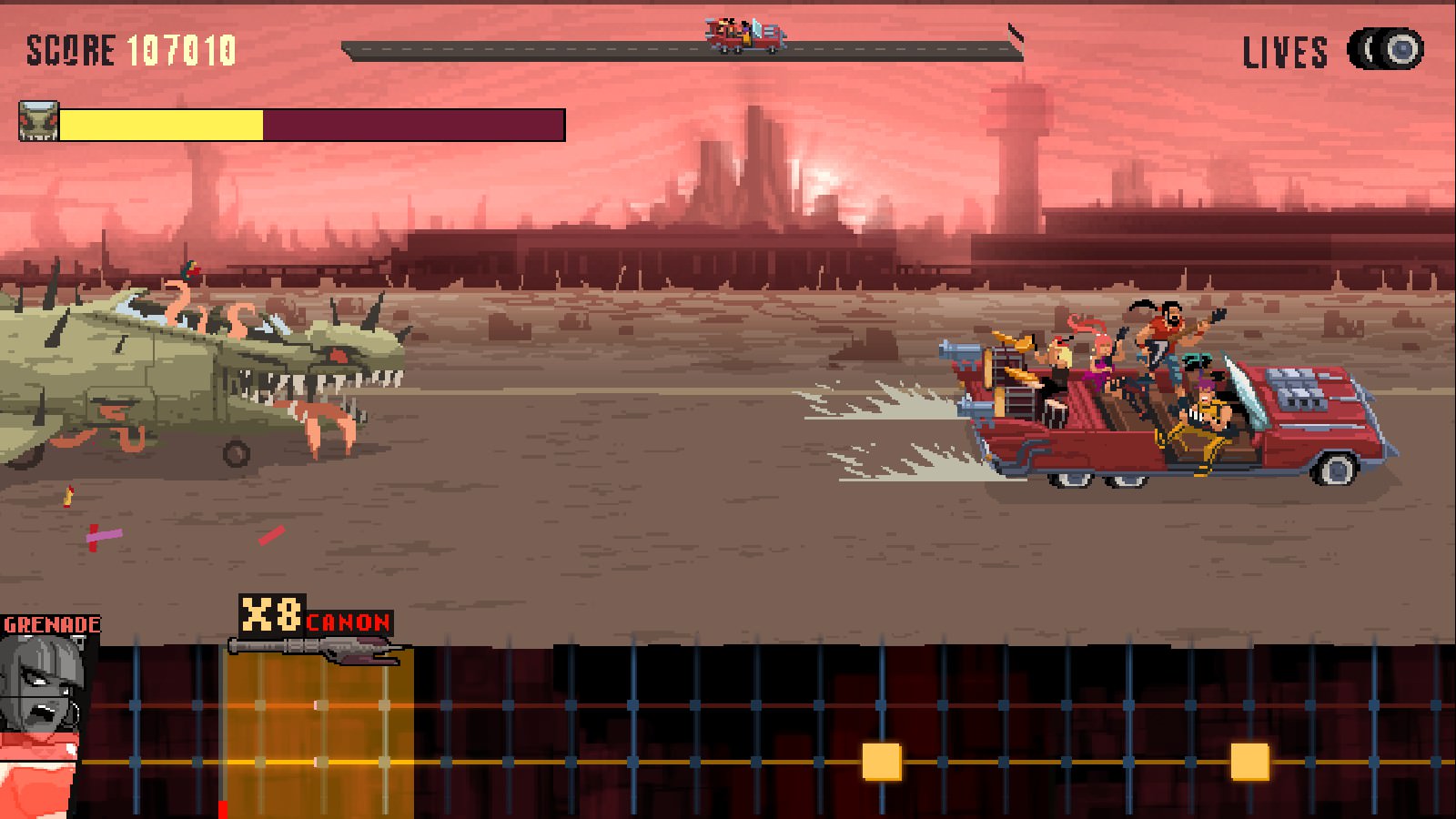 Despite which difficulty you choose, or if you choose to see the story or just go to arcade mode to skip it, you get a slow climb. Going from easy songs to start off with as you adjust to gradually getting much more difficult. This not only lets you get used to the fast pace, but also the other tracks if you chose to have more than one. Heck, even if you are on the easiest difficulty it will get hard as you fight to stay just out of the zombies’ reach. 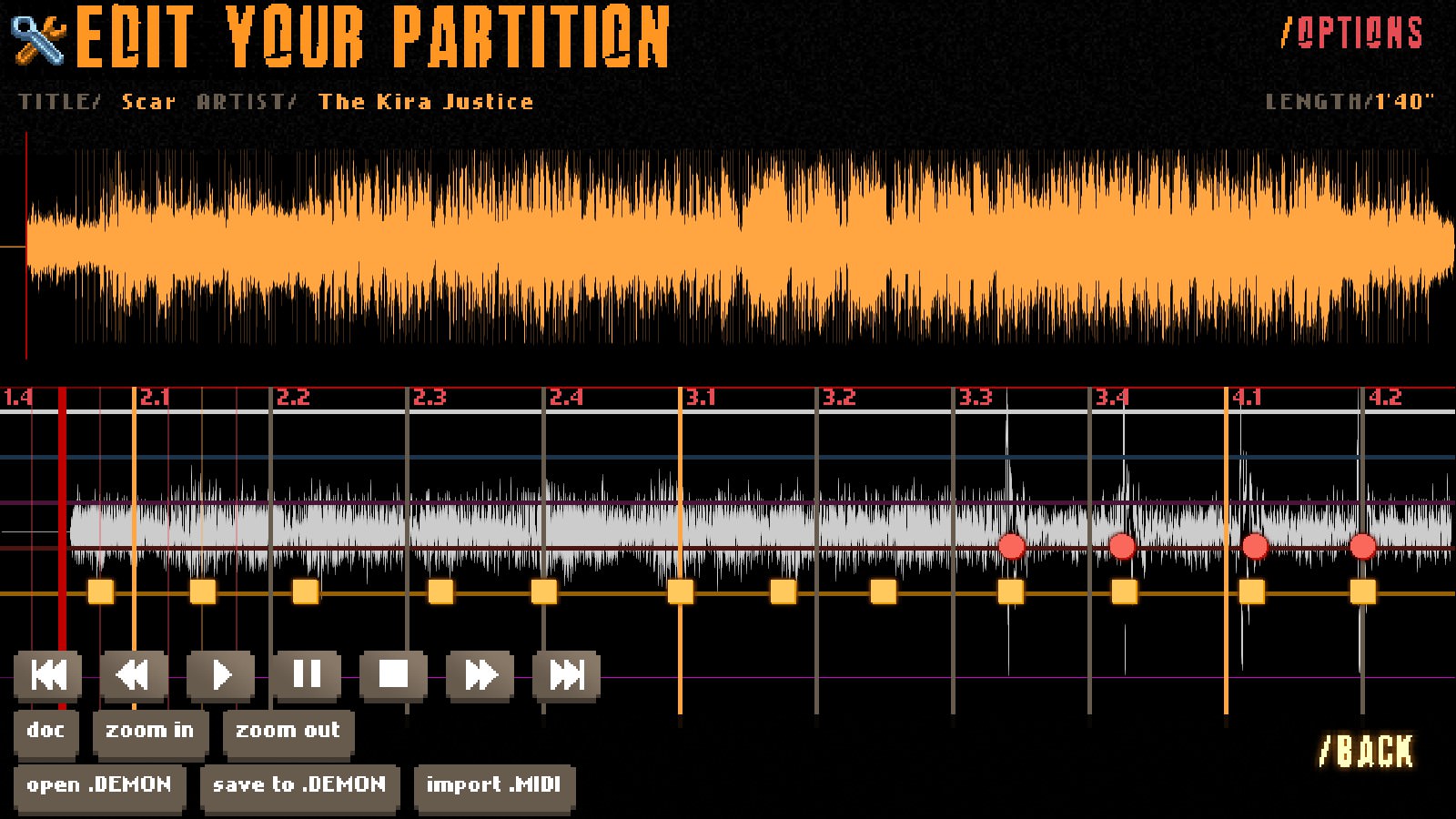 For anyone this is interested, Double Kick Heroes also lets you put in your own music and edit in the beats yourself. In addition to picking your own song, you’re able to select which backdrop you want and which enemy set you want the music to destroy. I only messed with it, not enough to get a whole song done, but I do wish it came with some kind of tutorial. It is pretty confusing when you first start out and I’m still not sure how to delete an unwanted beat (if you can at least). I only ran into one bug where the back button on the editor menu did not go back to the main menu, but it seems like an easy enough fix that it would not be one for very long.

Double Kick Heroes is designed with really nice pixel graphics both on the road and when inside buildings. The animation looks very smooth and the design of everything is unique. I can’t wait to see what else the game has in store as we get more enemies and characters added. The music is really amazing and I can’t expect any less since this genre prides itself on the music selection. Each song is composed by Elmobo just for this game and I liked every one of them even though I don’t usually listen to metal. 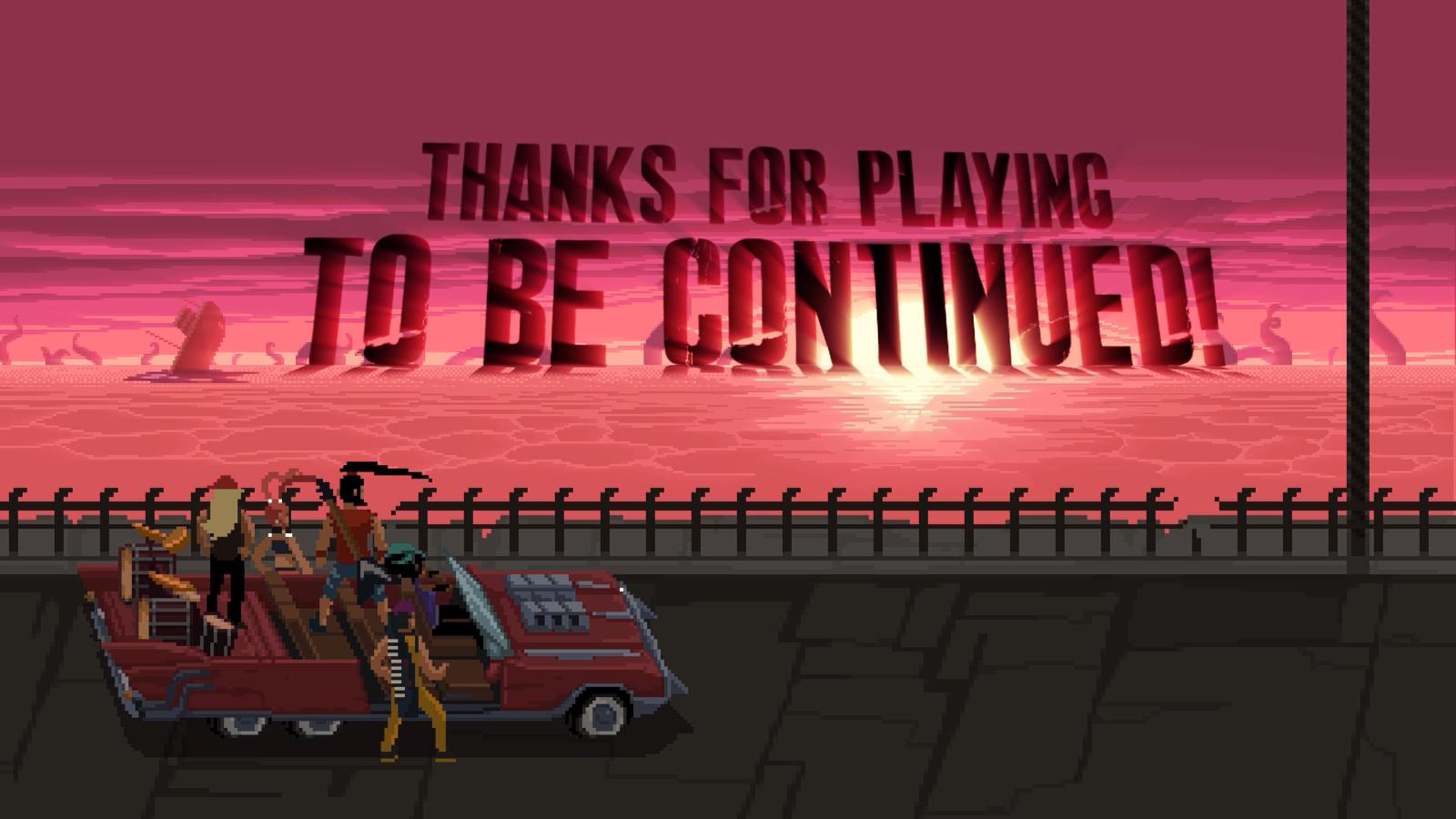 Double Kick Heroes is really shaping up to be a great rhythm game and if I didn’t know better I would think it would be full release ready. The music is as great as I would expect, the visuals are gorgeous, and the characters have nice banter between one another as the story continued to unfold. I even felt a craving to play Guitar Hero even though I don’t own it anymore, but if you happen to still own the Guitar/Band Hero or Rockband instruments, you can hook them up and use it for this game. If you love rhythm games definitely check this one out. As of now, around half of the planned content is available to play and enjoy.