Make Sail lets you build your own boat and sail it in a strange fantasy water world where seagulls guard islands and jellyfish can be harvested for energy.

In Make Sail you play the unnamed individual to find yourself seemingly the sole survivor of a terrible storm.

Your people’s legend says that they once lived in a tower on an island, and in that tower were a number of wind chimes. But your people grew restless and left the island, taking the chimes with them. Over time, the tower grew lonely and bitter, becoming a dilapidated, twisted ruin. About the tower grew a great storm that battered the islands. Your people realized they had erred, and tried to return.

But the storm was powerful and your boats were destroyed. You wake alone on a tiny island inside the eye of the huge storm that still rages. Only you can find and return the tower’s precious chimes.

First impressions of Make Sail are amazing. The game is hauntingly beautiful in its sights and sounds. From the lovely title screen; through the opening introductory sequence that tells the story, the legend woven into the tattered sail of a boat; to the gentle background music when the protagonist first wakes, sometimes so soft behind the sounds of the sea winds that one can barely hear it, sometimes uplifting and dramatic. I almost wanted to turn off the game and write the review then, before playing. 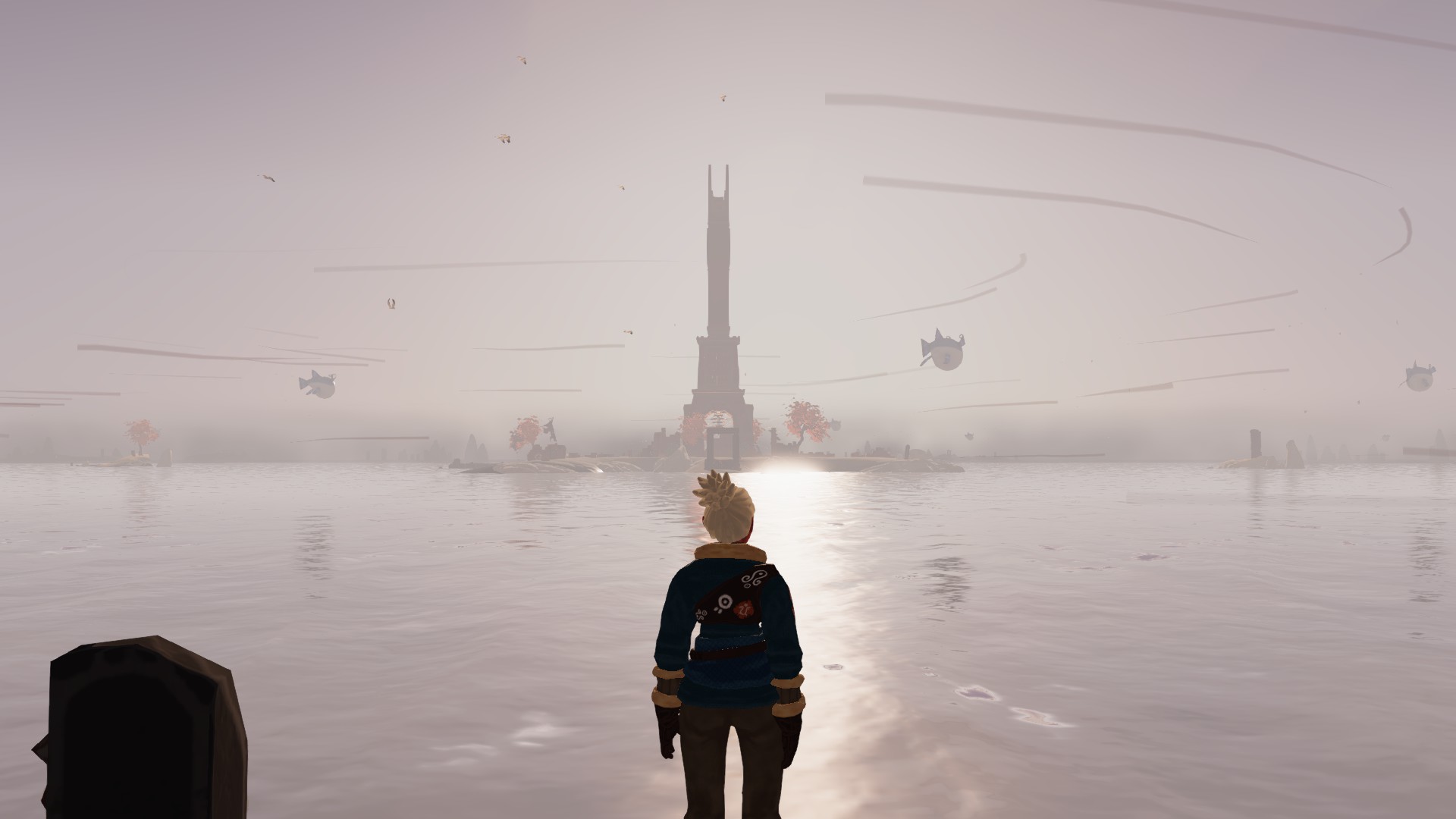 In game, the graphics are very pretty with a sort of cartoonish feel to them. You play from a third-person view of the game world: an expanding circle centered on the tower. Most of the world is water, but there are a large number of small island landmasses scattered about, though unfortunately they only seem to be from a relatively small number of source layouts — you’ll often see the same island in a number of places on the map.

The day/night cycle is nice; there are colorful sunrises, and a pretty star field skybox and bright moon at night. Lighting and shadow effects are great, especially once you fit some dynamic lights to your boat. The direction of the ever-present wind is shown as ghostlike animated vectors, which works really well. 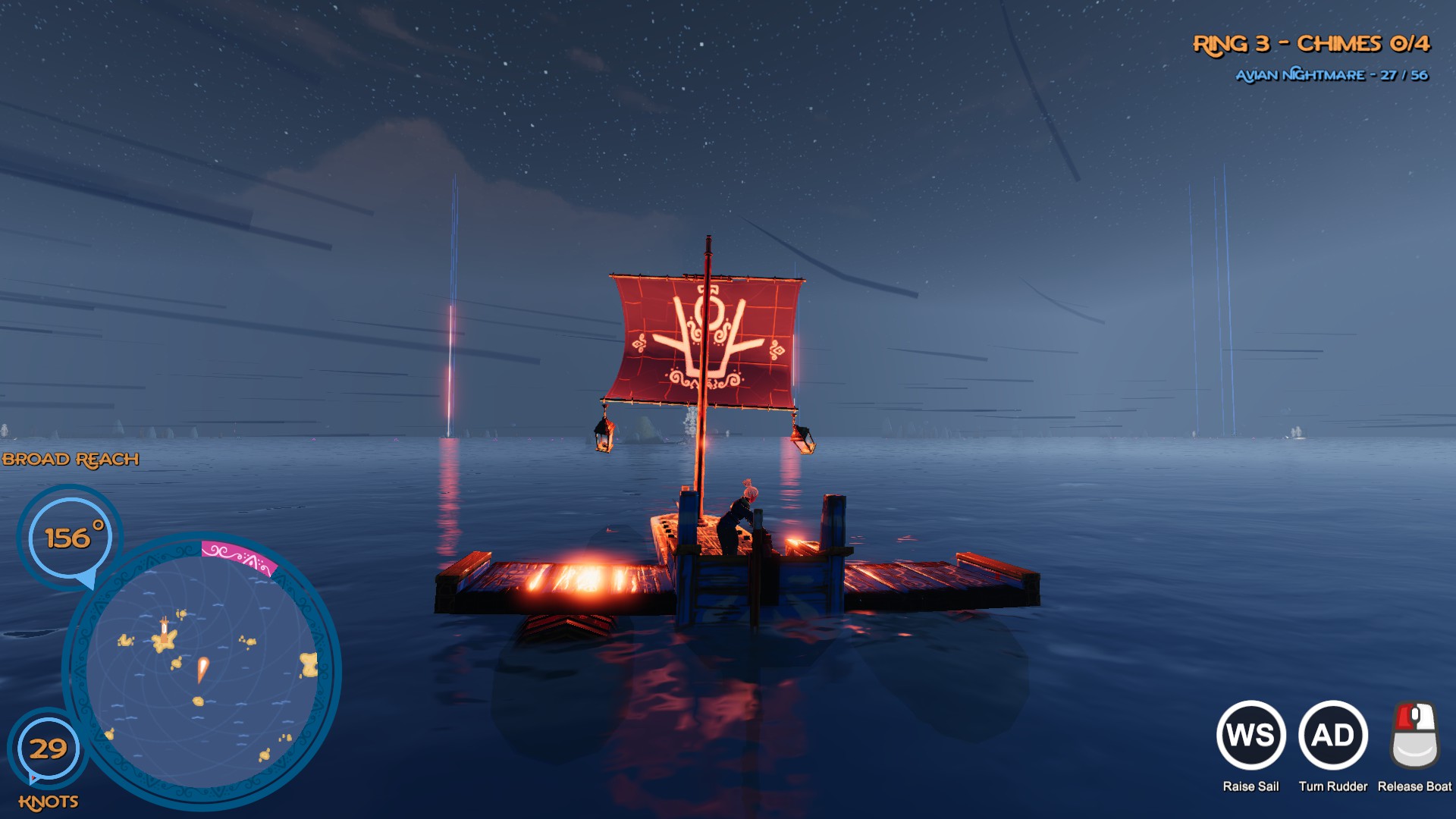 There are a few clipping issues from solid objects, but most of the time you’re at sea and don’t notice them, and tethers look unfinished. There’s also graphical flickering from lights or reflections in the far distance, and the storm boundary itself looks disappointing. I assume they’ll be improved in time, though, hopefully along with the weather graphics, which are a little disappointing. 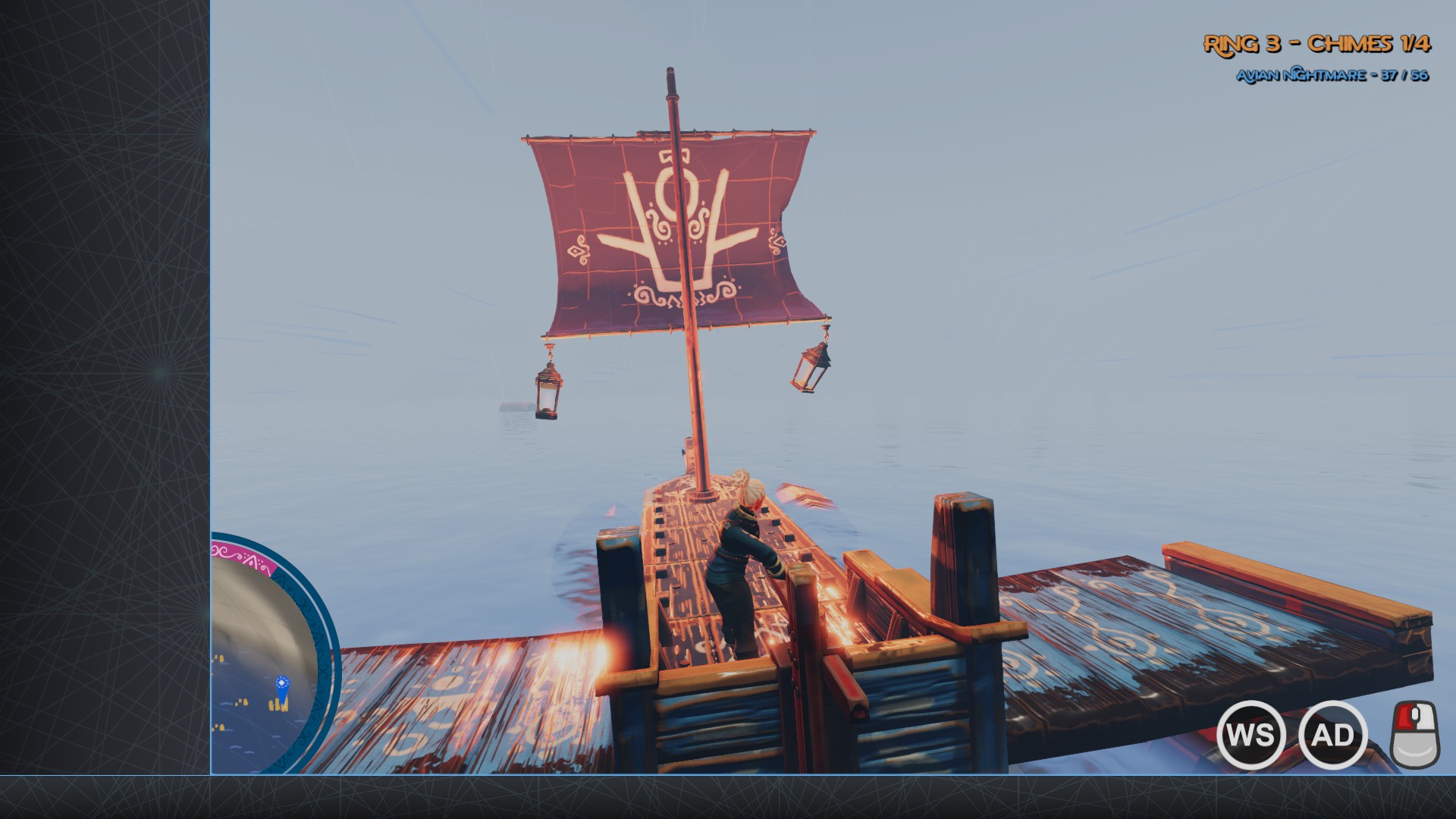 The interface is mostly simple and easy to use. Icons are informative rather than abstract. The “Add Energy” button should toggle to “Remove Energy” once pressed, since that’s what it does, but other than that everything functions as it should.

Sound is exceptional. The lapping of the waves and the howl of the wind accompany you everywhere you go. Music is lovely. Ranging from minimalist tunes through to dramatic, uplifting melodies, it’s wonderful background music that doesn’t interfere with the gameplay or become boring or repetitive. There are no voices.

There are plenty of graphics options to play with, but no vsync.

Make Sail is a sailing simulator at heart. The gameplay involves building and sailing boats and collecting items to unlock more boat designs and parts. There’s a story that wraps it all together, and it’s actually quite pleasant, but ultimately the gameplay is repetitive and pretty simple. It’s a good thing, then, it’s so relaxing and enjoyable.

You start the game on a small island with a glowing light atop its bluff: one of the missing chimes. You collect the chime, build a simple sailboat, and return the chime to the tower on the nearby island, at the hub of the storm. Returning the chime to the tower you’re shown the world map — almost all storm clouds, with a tiny open circle in the middle containing the tower and its immediate surrounds — and the tower’s happiness at receiving a chime pushes the storm clouds back, expanding the map. 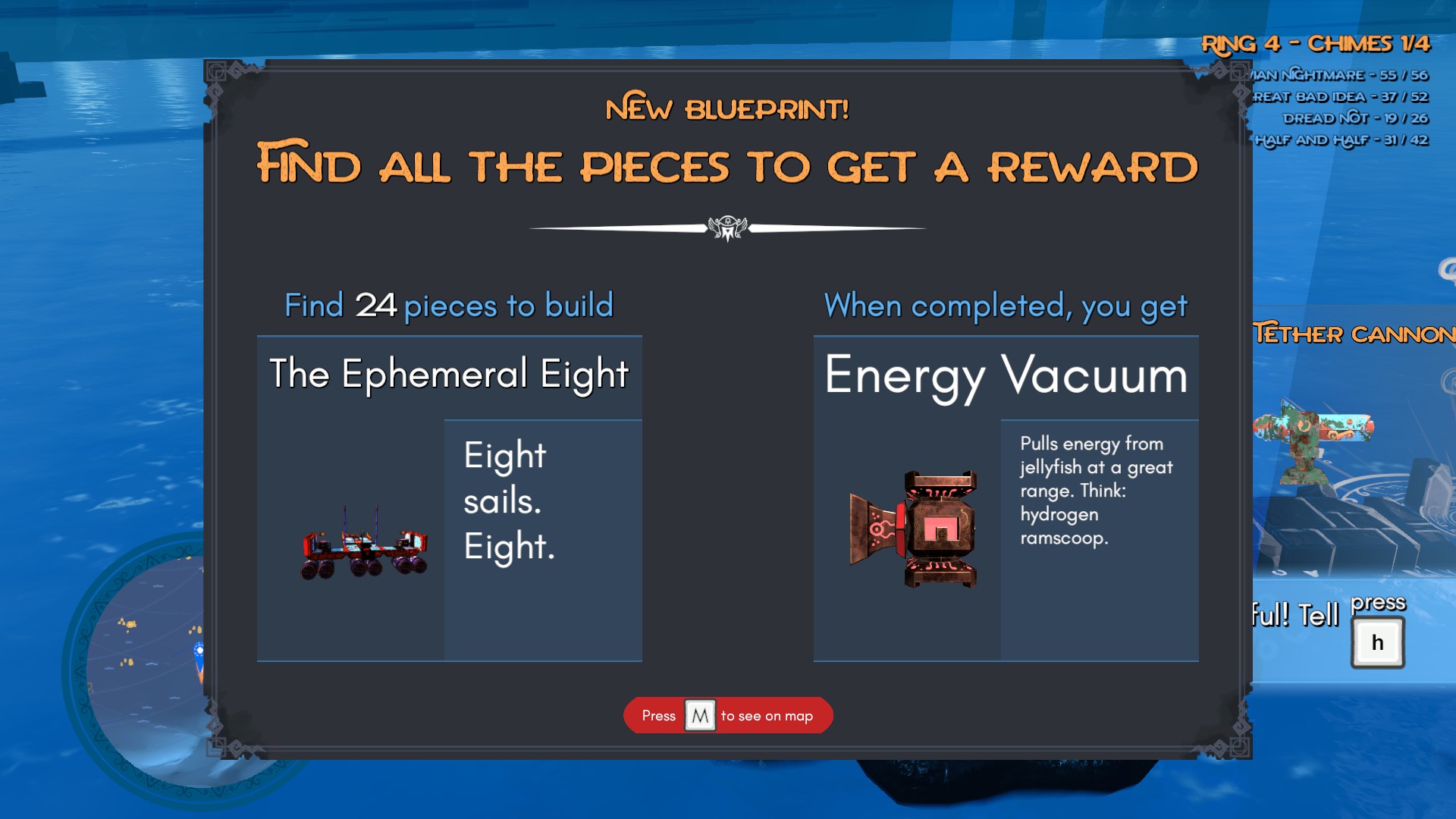 As you leave the tower you see a strange bottle-like object on the ground. You pick this up and find that it’s a blueprint for a new boat design, for which you need to collect a number of parts. Your map is shown again, this time with the location of each of the parts you require shown as waypoints. And so you spend the rest of your time sailing around the gradually expanding eye of the storm, using the ever-circling storm winds, collecting blueprints, items, and chimes, and occasionally visiting the central tower to return the chimes and push back the storm’s boundary. 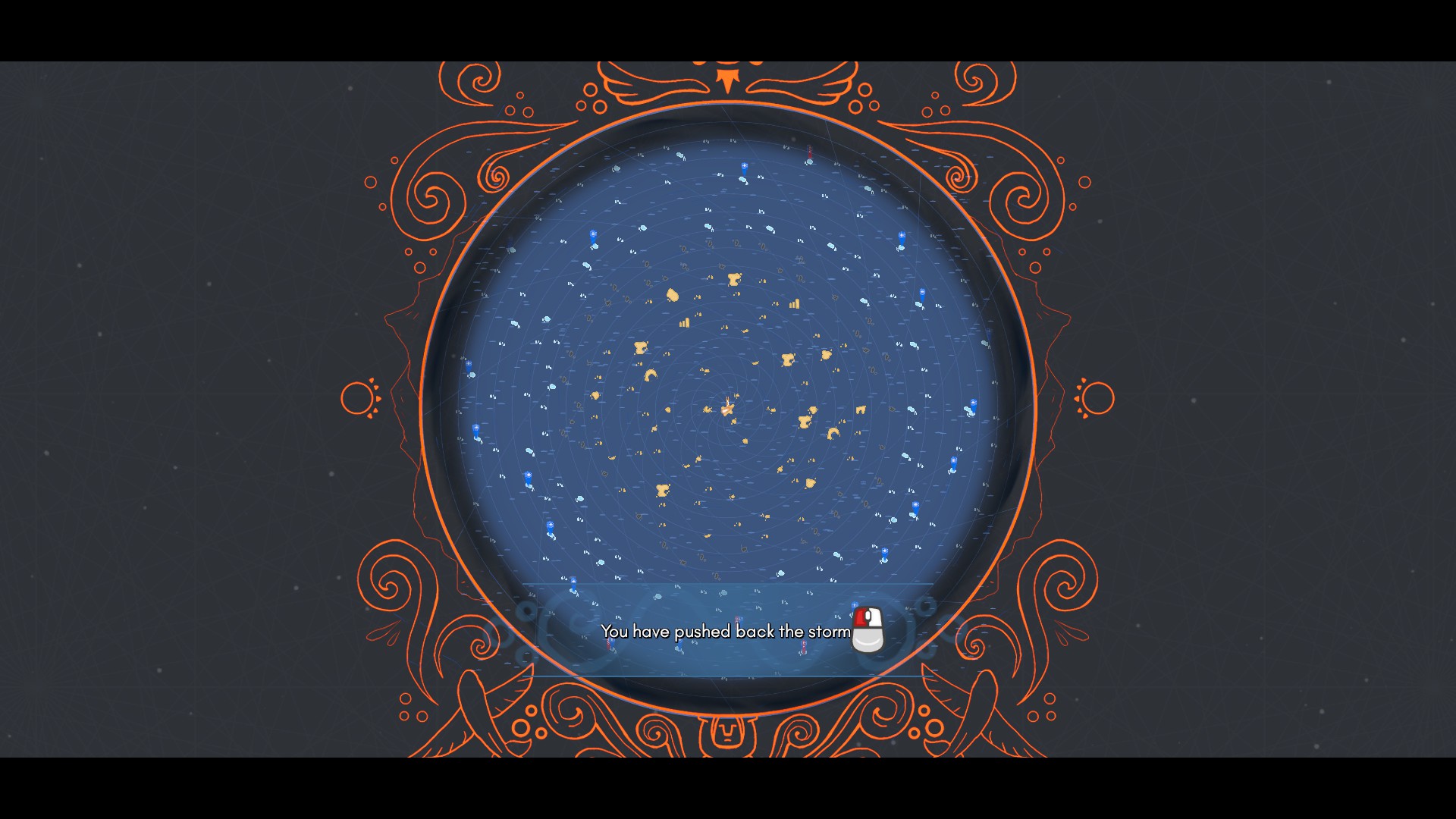 There’s no combat and no real enemies, though after your first few visits to the tower you’ll start to encounter tethered seagulls, apparently captured and fastened by magical lines to islands as protectors. Never mind, though; your character is indestructible and seems to only be able to die by drowning, so just swim to shore if your boat is destroyed. The game also features huge, blimp-like flying creatures, but so far I’ve not encountered any of those tethered as an island defender. Ultimately the challenge comes from sailing and navigation, and building your own cool boats. 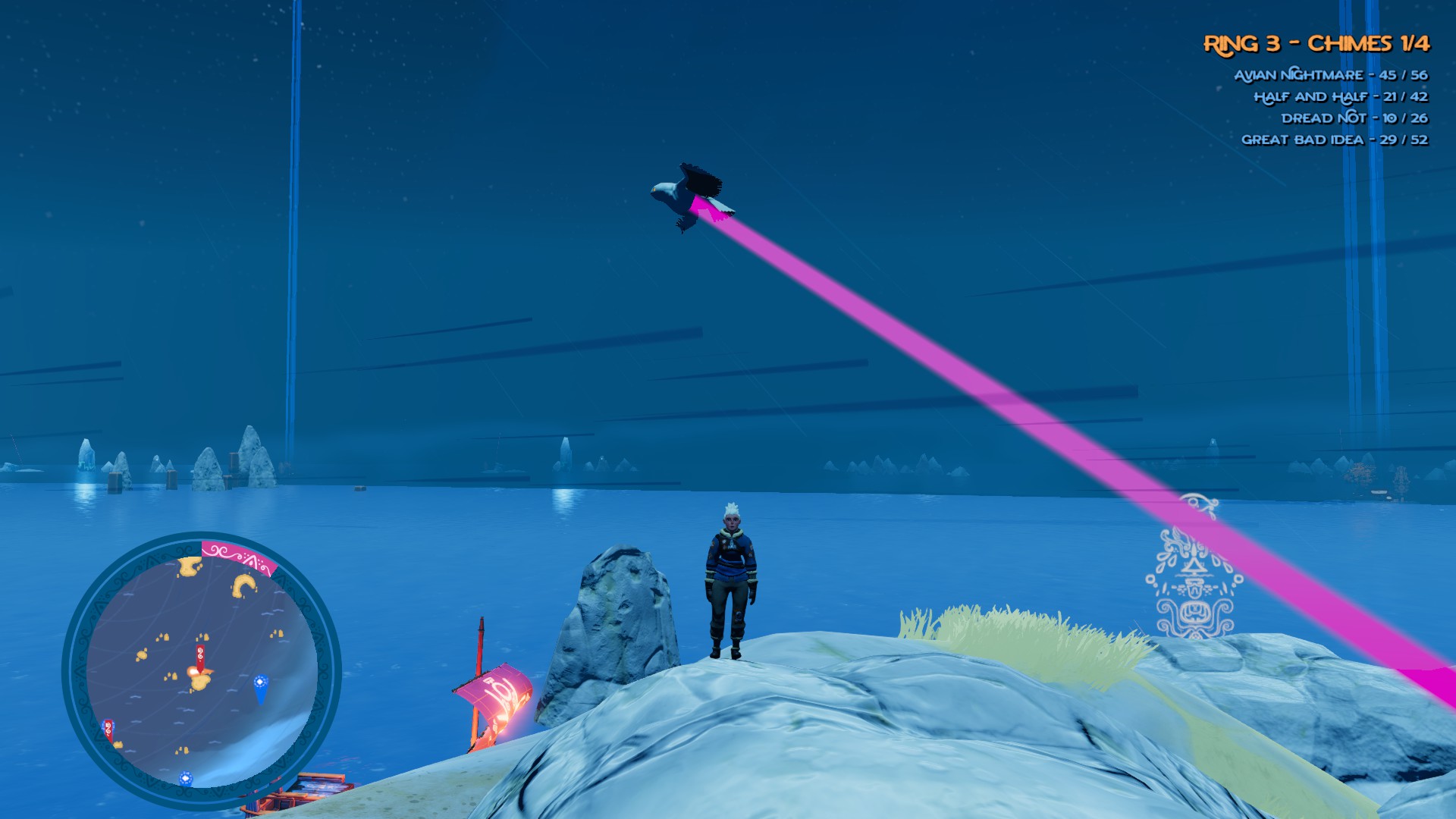 Boat parts are creative and interesting. Planks, barrels, hull pieces, sails of different types, and lights are all quite normal and expected, but the game also includes tethers (like energy-based grappling hooks), energy vacuums (for harvesting energy from jellyfish!), jets, propellers … even a mechanical scarecrow, which unfortunately doesn’t work against tethered birds. If you can’t be bothered collecting them throughout the story there are even some in-built cheats to make the game more sandbox-like. 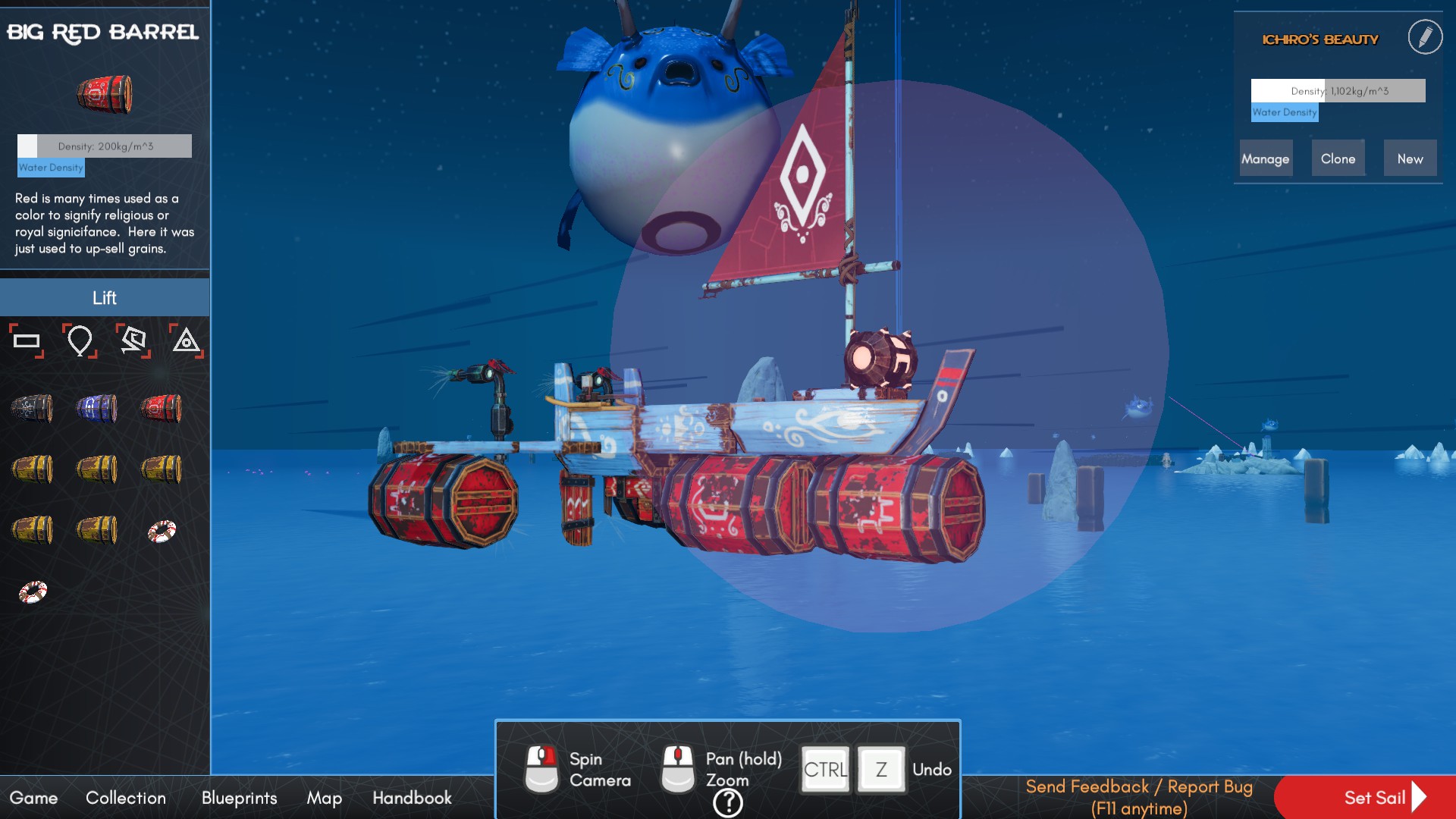 There’s also Twitch integration, which doesn’t interest me, and a cool little GIF saving feature, which is a nice gimmick. This allows you to save up to the last 10 seconds of play into an animated GIF, allowing the possibility of Make Sail blooper reels. I already have a few possible entries of my own.

Make Sail has only just launched into Early Access, and it shows. There are bugs aplenty, from little physics and graphics glitches and missing handbook pages to boats that randomly sink, and CTDs and weird freezes where the game graphics go black, but the UI remains visible. These seem to increase in frequency as you play, too. At least loading times are short and save spots fairly plentiful, so I’ve typically not lost more than a few minutes each time. Tethers are also very buggy, both graphically and physically; expect to sink a lot if you try to use them.

The game also has no controller support, though it’s crying out for it, and no in-game key remapping. The maximum camera sensitivity is also far too low, especially on the build interface. It makes building or extending a boat a chore, particularly since placement of components is so fiddly. The automatic zoom in when spawning a boat is a bit annoying, too; the game should remember your previous zoom level rather than resetting it. 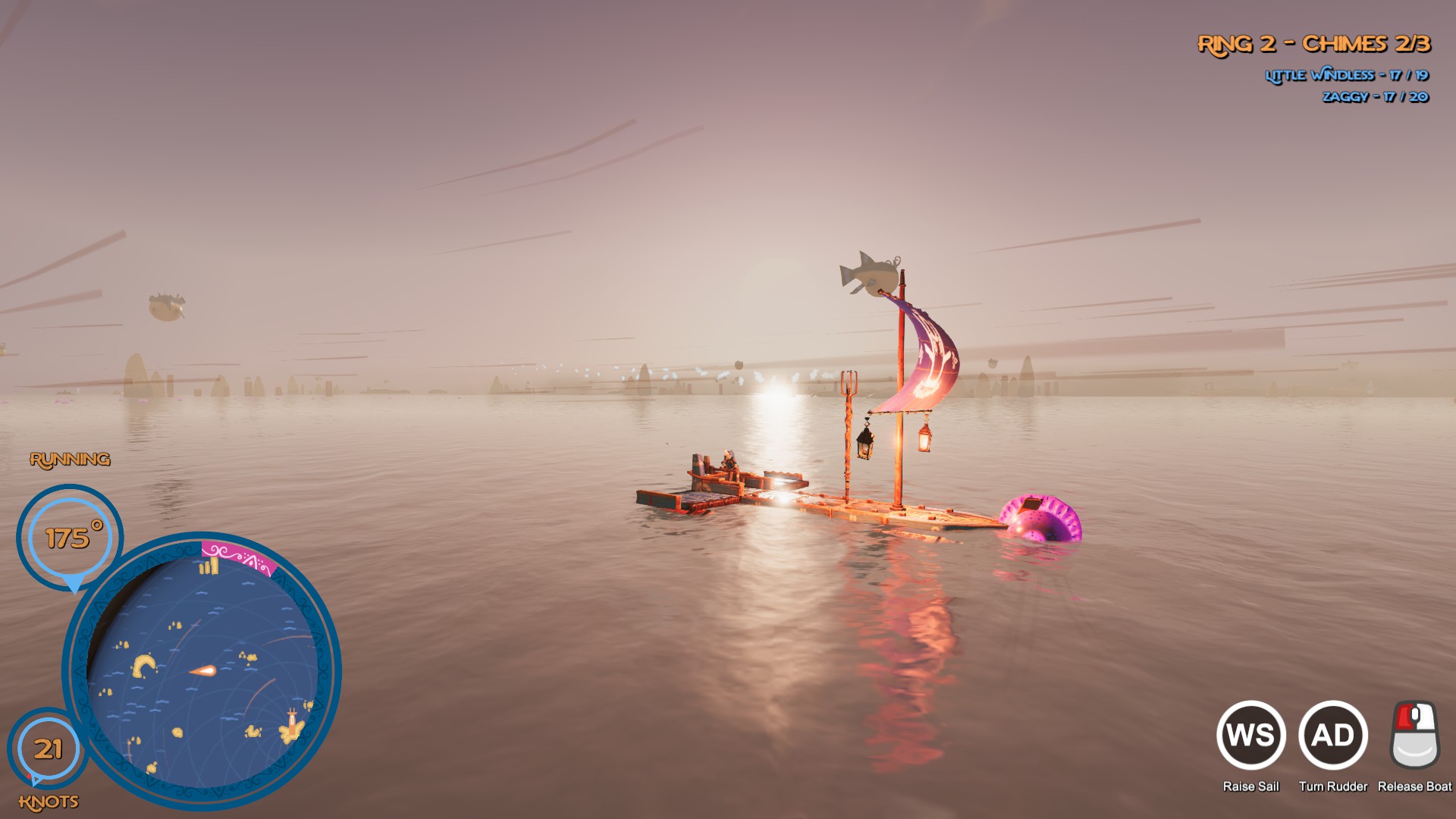 Make Sail is an impressive debut. Other than building, sailing, and collecting items there is nothing else to do yet, but the game is presented so well that even someone with no prior sailing interest — like me — can have many hours of enjoyment from the title as it stands now. As it moves through Early Access I expect that enjoyment will only increase.

I’ve never sailed before, and have only little interest in doing so, but I really like Make Sail. It is peaceful, relaxing, and beautiful.