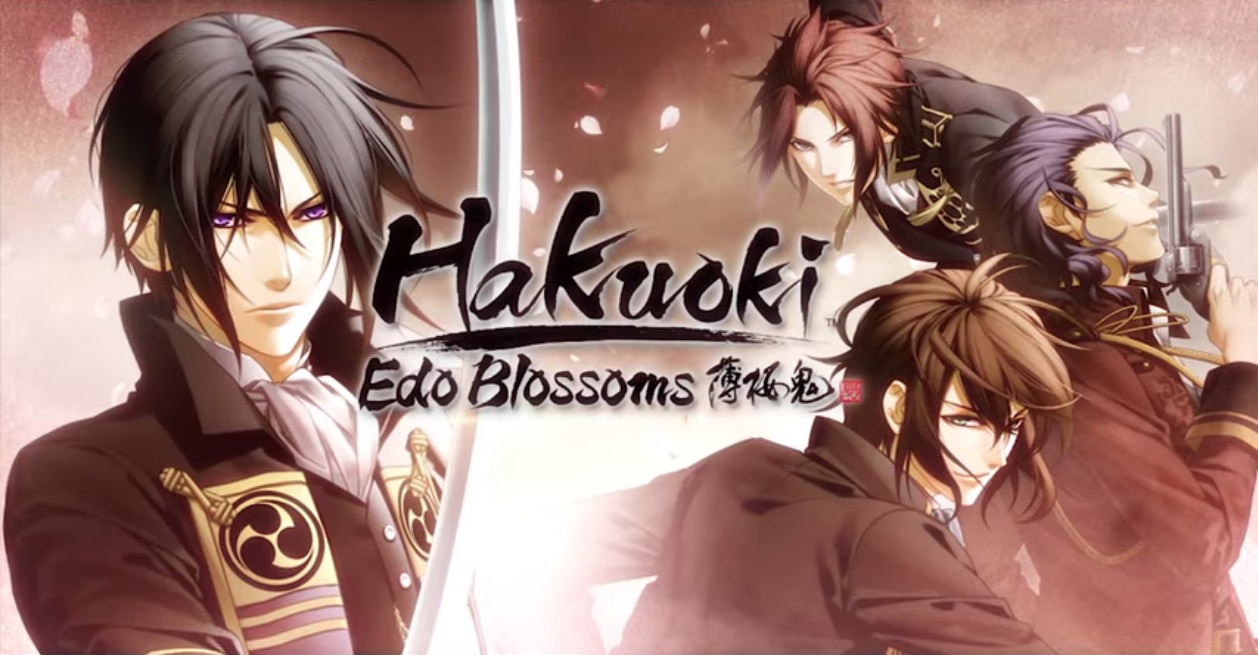 It’s time to go on another fun filled and exciting date with your favourite Samurai bachelors!

Just a short while ago we featured the first half of the Hakuoki story, Hakuoki: Kyoto Winds. On first glimpse one might say that perhaps both halves should have been released together in one package like it originally was. In reality it actually does make a bit more sense for them to be two separate games. Each game features a decent amount of content with a lot of replayability. Both games feature multiple differing conclusions depending on the choices you might or might not have made. The reason why I say it makes sense for it to be two separate games is basically that you are allowed to have a reset button that lets you get the story back on track should your choices have been less than stellar in the first half of the game and you are desperately wishing you had done things differently. It is nice to get a break like that in a game once in a while. I admit that I did not play every possible route in the Kyoto Winds simply because much of the dialogue was the same. Too much of a good thing maybe. Yes, the story branched off, but the overall story and perspective in the routes I tried were pretty much the same for the majority of the game with only the dialogue changing. That definitely isn’t the case this time around. While I still have not managed to get through every story in Edo Blossoms, I can tell you that the ones I did try were very different including the starting locations. 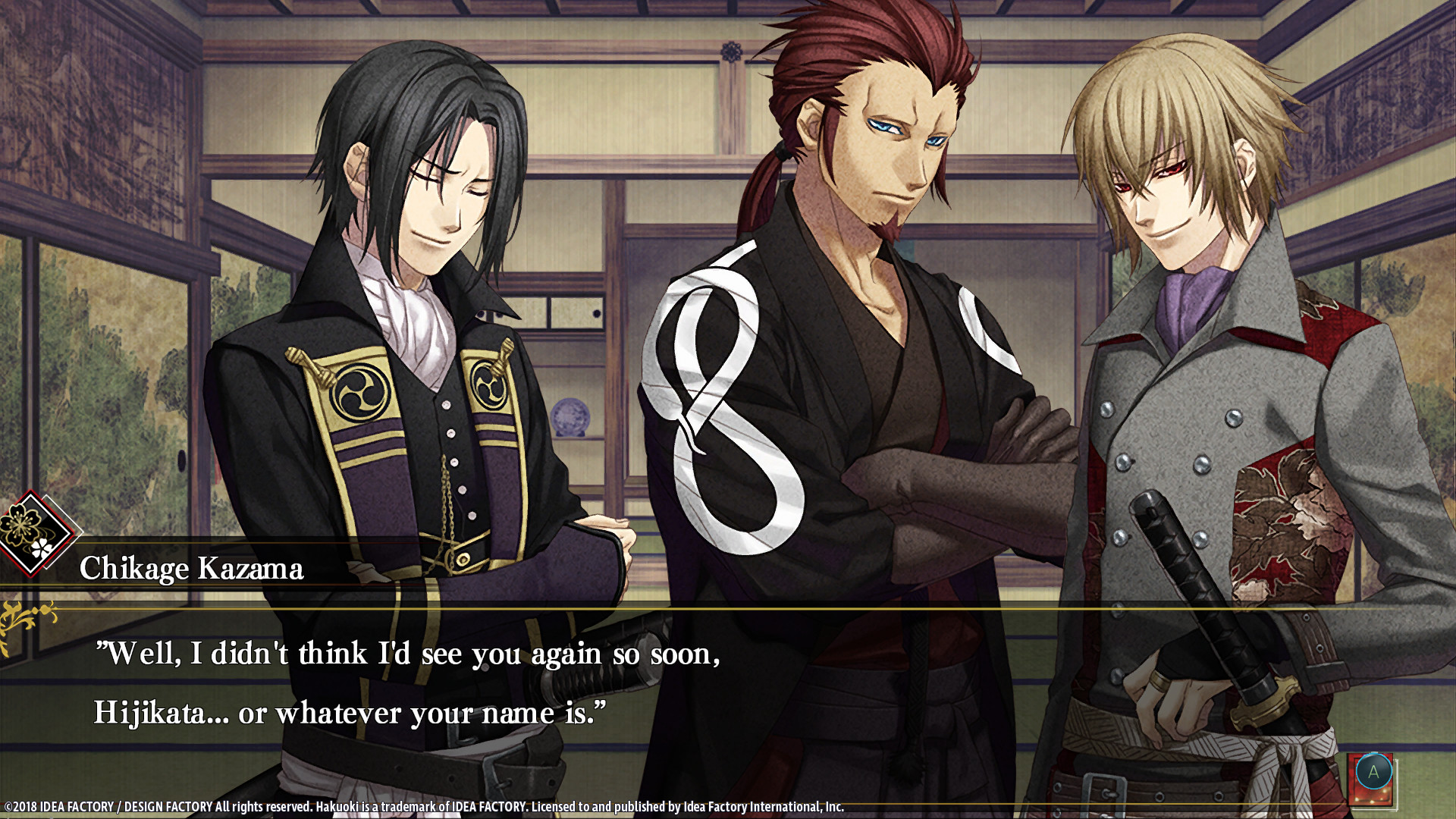 Although I very much enjoy them, I always have trouble reviewing this style of game simply because it is all dialogue without any world map exploration, combat, or any other gameplay elements to speak of. I have to be very careful not to talk too much about the story itself so it won’t spoil it for those who are reading this should they decide to pick it up and play it for themselves. Of the story branches I played, I can say the story definitely presents a sadder, more melancholy feeling this time around. The would-be heroes of the previous game, the Shinsengumi, are finding themselves becoming obsolete and being wiped out as the world modernizes. Their old way of life is slowly fading and disappearing into a thing of the past. Despite all odds, they still struggle on trying to protect the world as they know it from enemies of the Shogun. With the multifaceted story delivery system, the way the plot unfolds varies based on which story branch you are on. Major plot points still appear to happen regardless of the story branch you are on but the location where you are told these story plot points generally varies. Sometimes it occurs when you are right there in the middle of the action, other times you hear the news from other characters. 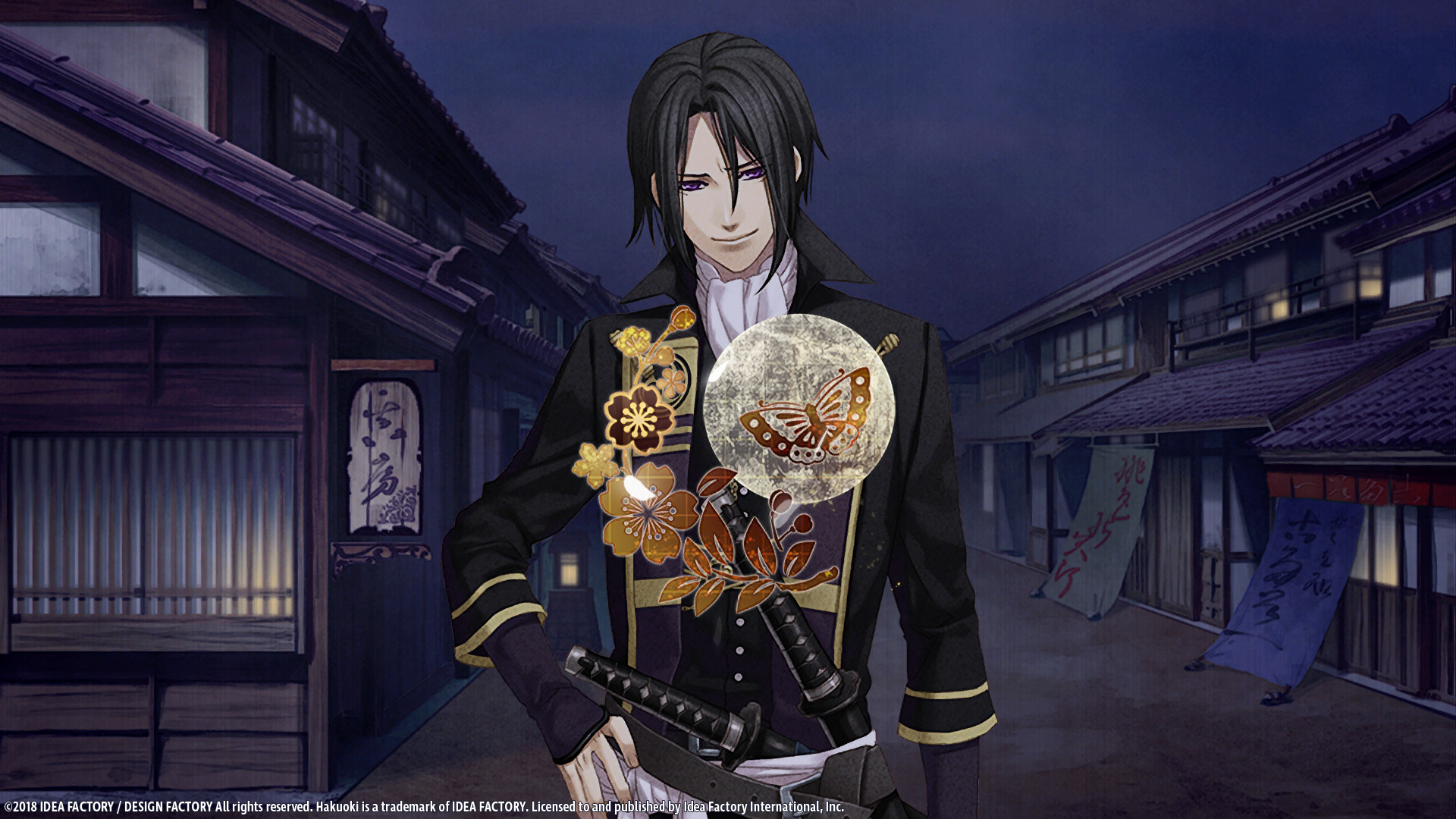 Similar to the previous game, the dialogue choices you make have an impact on the story. The difference is this time around instead of just being an affection stat that is modified, it also impacts the corruption of the character. The corruption stat will lead you to a bad ending if you allow yourself to slip too far down the corrupted path so be very careful. You don’t really want to be all that bad do you? The choices you make will quite probably result in a few major or minor impacts on the story that could make a great deal of difference. The next scene might play out with some alternate dialogue that is no big deal. Other times the entire next scene might take place in a different area completely before syncing back up with the main story for the story branch you are on. 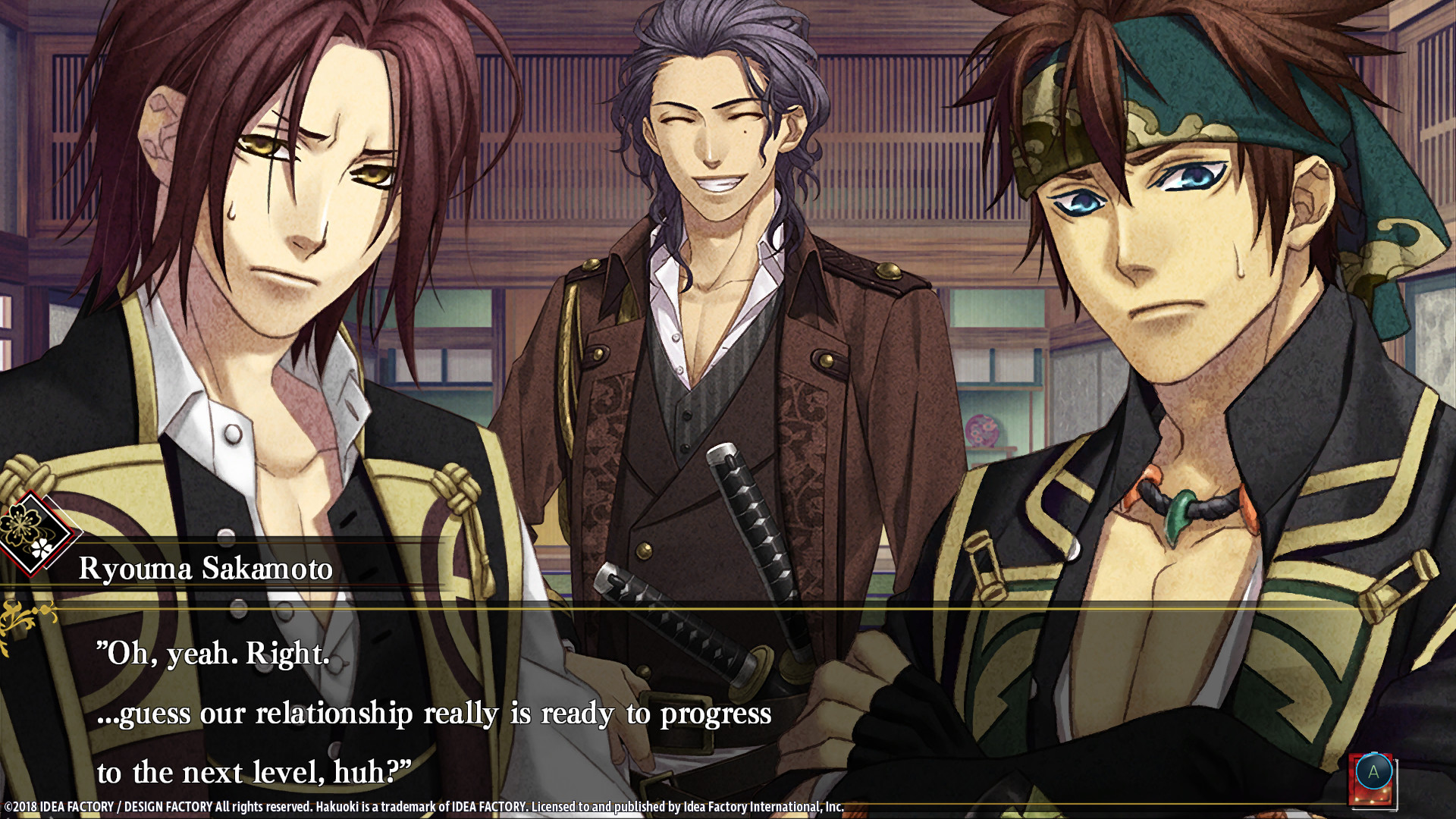 The overall story holds you in its grip as it is fairly powerful and moving. You enjoy the Shinsengumi and want them to be successful and happy. Be warned and aware that as the tale progresses it eventually takes on a much darker tone than the more lighthearted first half. If you are one who can get attached to characters, have sympathy and become engrossed in the lives of the characters, then be assured this will be a thrilling story for you. If you are the kind of person who simply skips the dialogue to get to the action points in games then I question why you are considering playing a game that is solely about the story and dialogue and lacks any form of interactive combat. Due to the higher death count of the “good guys” and the contrasting tone between Kyoto Winds and Edo Blossoms, I would still argue the game being split in two makes sense. However, I found Edo Blossoms to be shorter than the prior game most likely due to the fact that the game was broken in two when the Shinsengumi transitions from Kyoto to Edo for simplicity sake rather than being designed to be two separate games. I kind of felt like when Kyoto Winds ended, regardless of the end you were on, that it felt like it was just a new beginning for the characters rather than the end of the game. 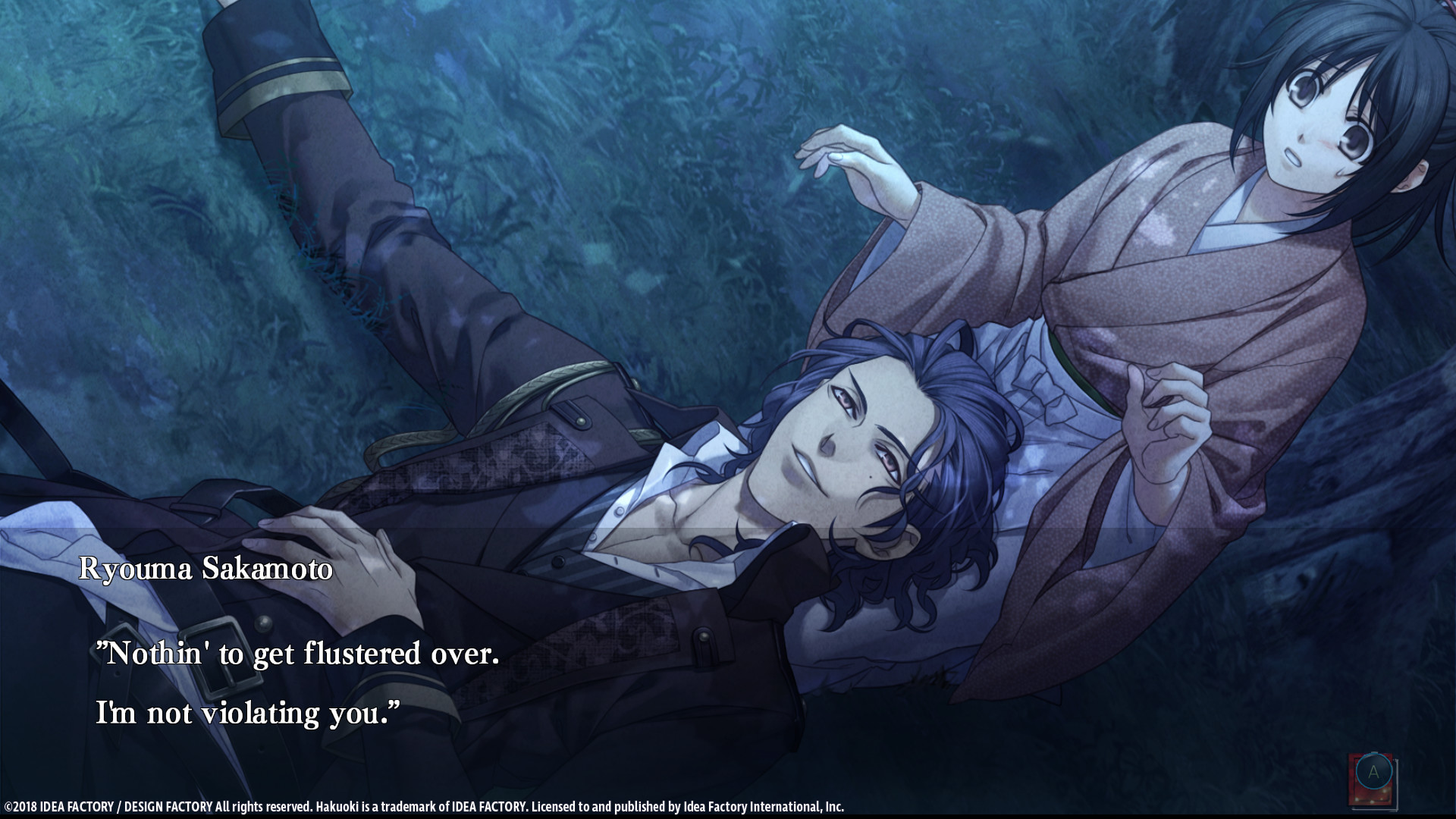 Part of the message delivered in the game is how modernization can really impact age-old cultural customs and how no matter how hard to you try, you can’t fight progress. You will need to give up everything that made you what you are and embrace the changes or be ground into the dust by the wheels of progress. The Shinsengumi’s time has passed. The ways of the sword are being replaced by the age of gunpowder. The expert sword fighters are finding themselves easily out-matched by unskilled warriors who simply had the range advantage. In the previous game we were introduced to the Furies. Furies were warriors who had drank of the Water of Life and turned into a half-demon. These half-demons were scorned and disrespected by the true demons but were feared on the battlefield by the weaker and more vulnerable humans. Furies had the advantage of being able to quickly recover from any wound including wounds that would prove fatal to a normal human. However, the half-demon gifts came at a great cost. No longer could they operate during the day and were forced to become creatures of the night. They also paid the price of suffering from painful bloodlust if they did not frequently drink the blood of their victims and they also burned away their remaining lifeforce every time they used any of their Fury powers. These Furies and their bloodlust play a much bigger part of the story in Edo Blossoms. 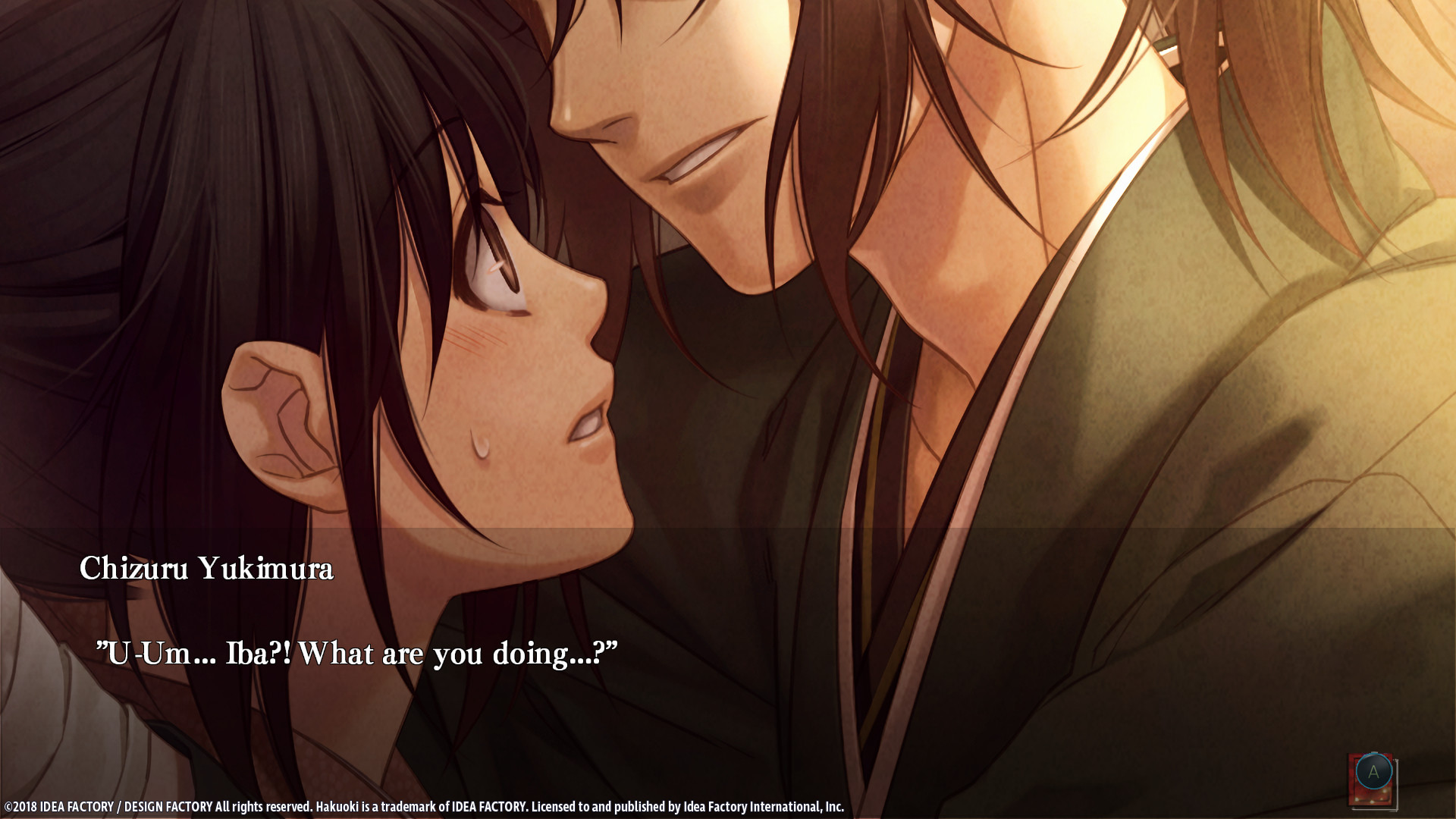 Graphically, the game is pretty much identical to Kyoto Winds, and that makes perfect sense as it used to be a single game but it was carved in two in order to port it more efficiently. For a pure visual novel, Edo Blossoms looks very good. All the characters are displayed as expressive static images of the screen against a backdrop that sets the stage for the dialogue that is being displayed. Sometimes rather than being a character overlaid over a backdrop, a drawn image is displayed showing the characters in a pose suitable to the dialogue. Action sequences are sword flashes on the screen in a color that corresponds to the character performing the action. There are plenty of backdrops throughout the game to help it actually feel like you are moving around the countryside and to new areas. Like in the previous game, Edo Blossoms gives you pink text to indicate when a bit of lore or definition is available to help you understand exactly what the characters are referring to. 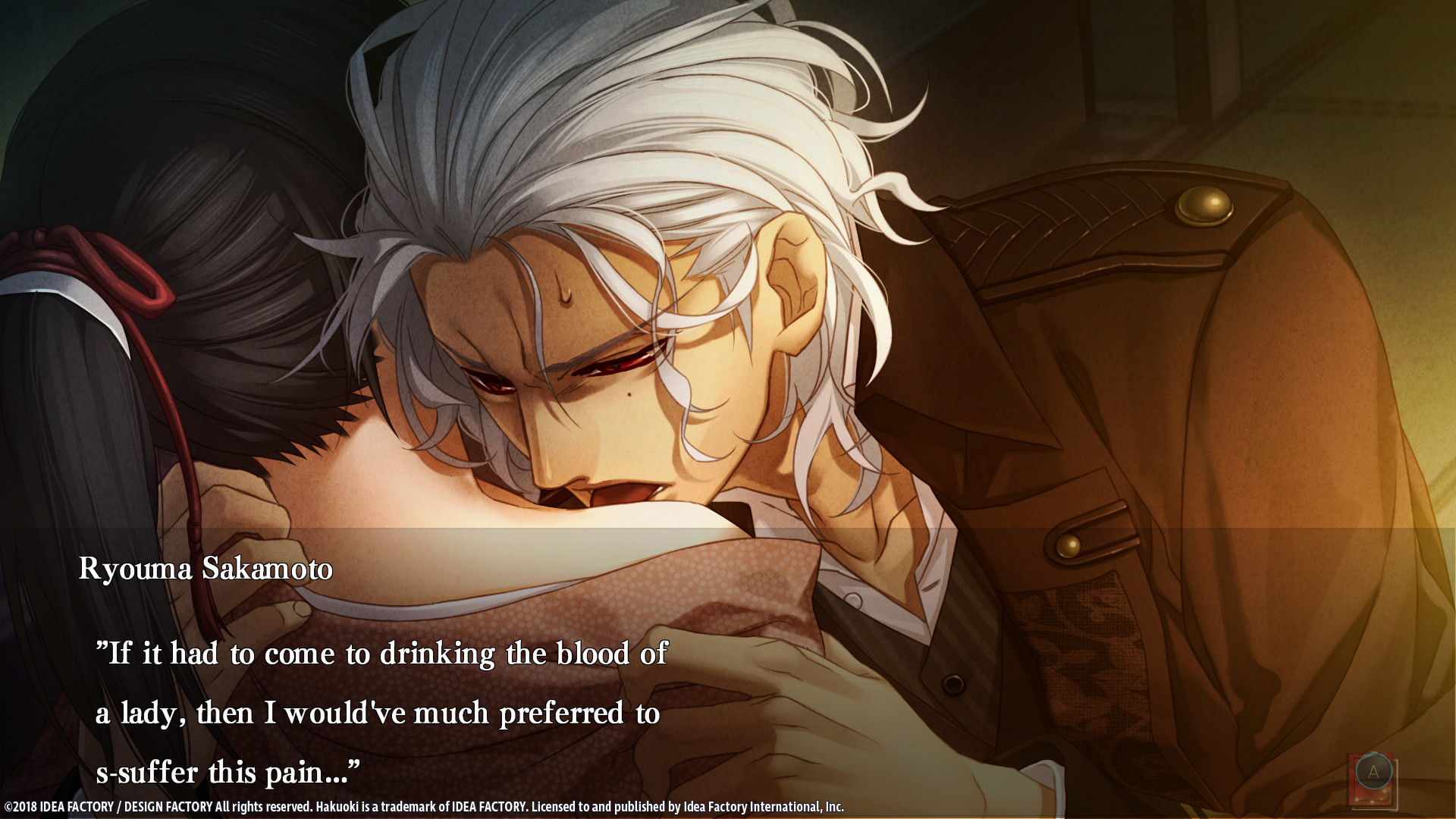 The voice acting in this game, as far as I could tell, is very well done. Despite still not being able to understand the language even with playing so many games with it spoken, I could easily tell when the characters moods would change simply by the tone they took when speaking. Each character’s personality stood out when they spoke and the voice actors did an exceptionally great job conveying the character’s voices in ways that matched the personality the character had in game. The music in Edo Blossoms was just as pleasurable as in the previous game and the lovely melody truly helped tie the mood and setting together. The ambient sound effects made the game feel more alive and realistic as well. 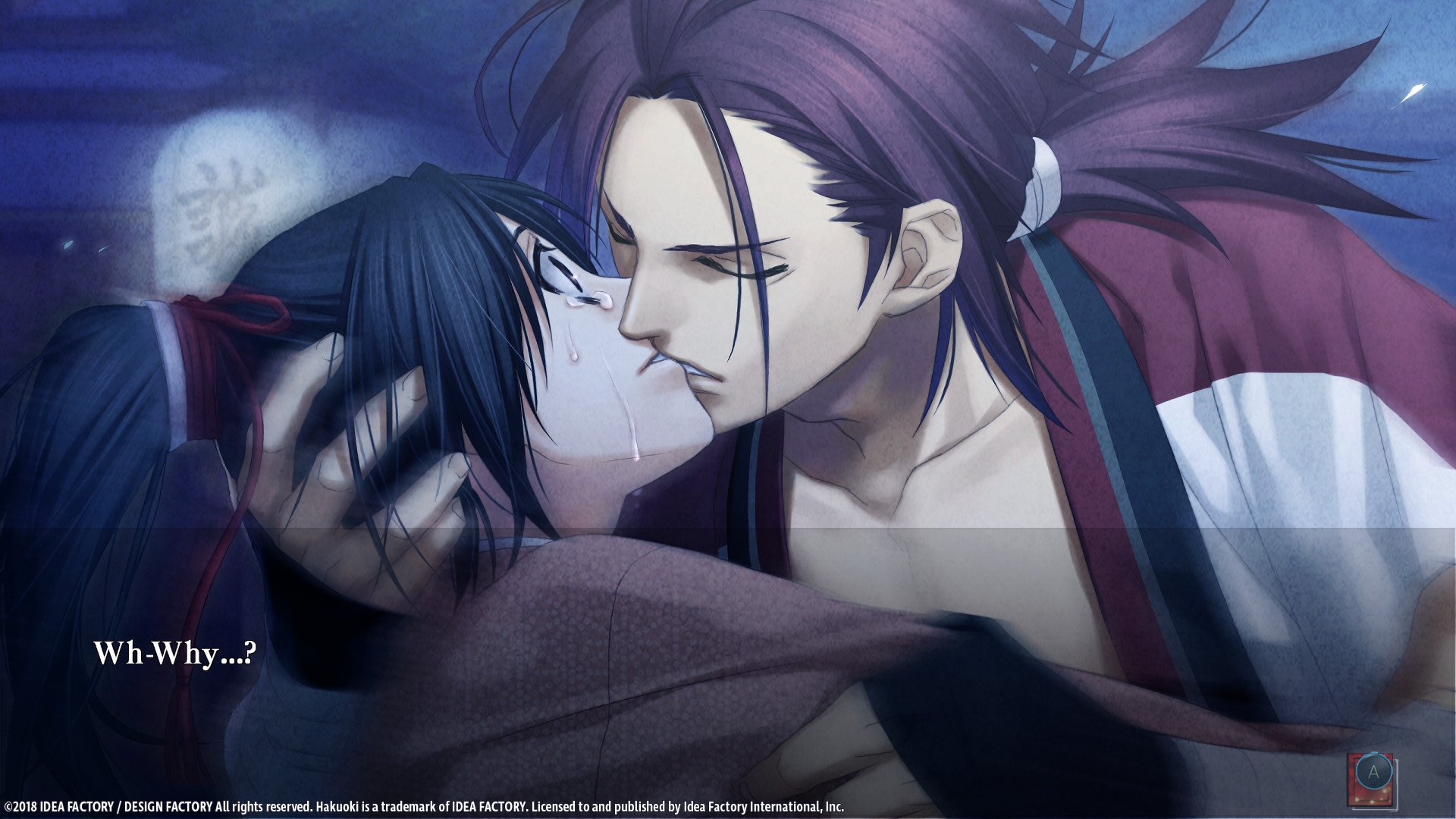 Unlike the original, the controls were flawless from the start. I didn’t need to rebind anything as they were all logically set to useful positions. There were a couple of things I couldn’t figure out how to do on the gamepad but the gamepad really wasn’t needed for this game. I actually found myself not bothering to turn it on and just using my keyboard and mouse. 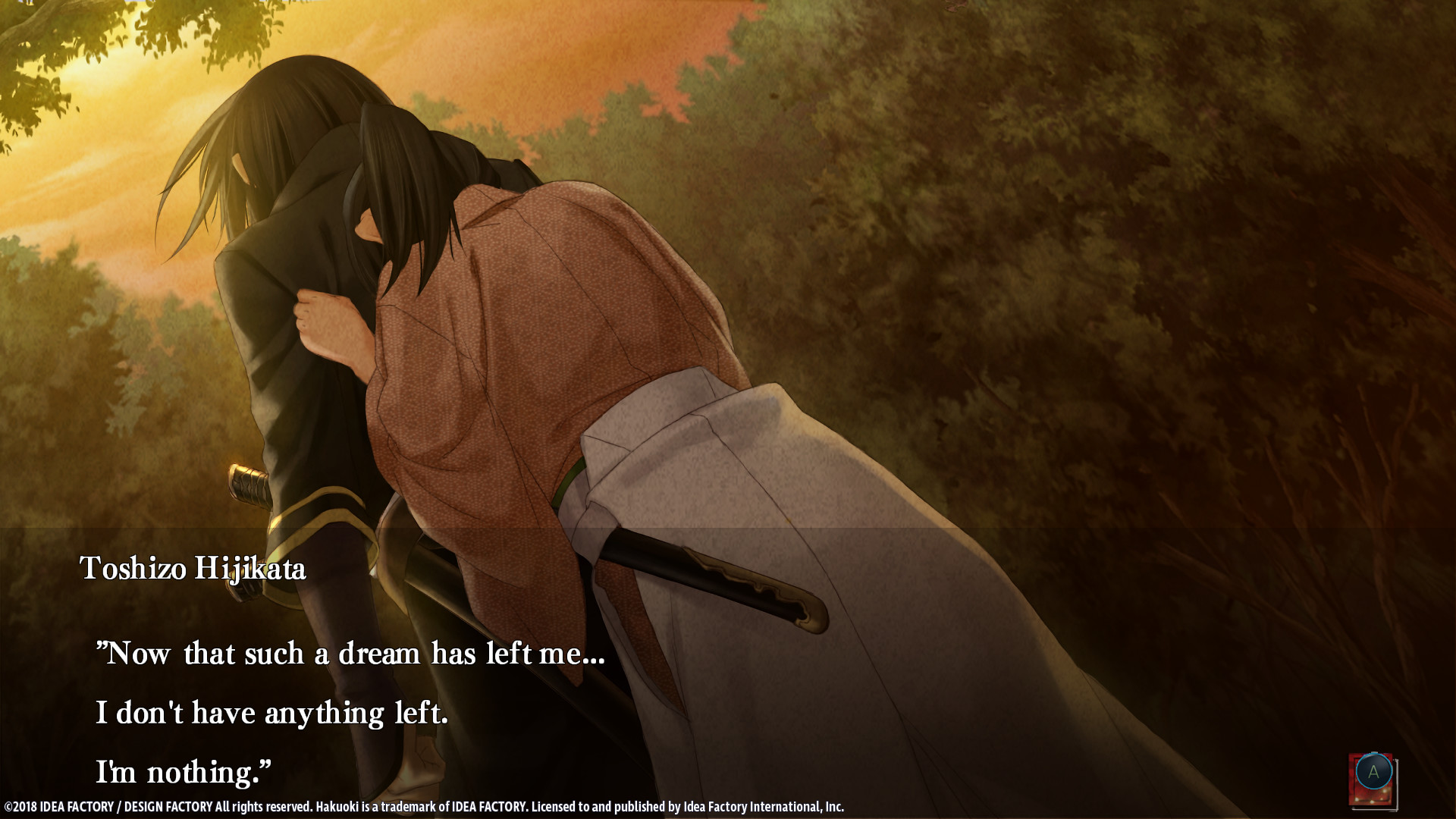 So, should you get Hakuoki: Edo Blossoms? If you played and enjoyed Kyoto Winds, you owe it to yourself to see how the story unfolds. While the ending on Kyoto Winds probably could technically stand on its own you will be missing out on the further adventures of your favourite Shinsengumi. If you are new to Hakuoki, you might want to play Kyoto Winds first simply so you get all the back story, but it’s probably okay to skip to Edo Blossoms if you really want to. It does a reasonable job of catching you up at the start, but I really feel you should play Kyoto Winds for yourself first if you want to get the full enjoyment out of the games. If you are a visual novel fan, this one is of pretty decent quality; the story is multifaceted and detailed with the choices you make mattering for the most part. As a fun fact, the characters and story portrayed in the game, for the most part, are based on real world historical events and people with a little narrative license thrown in for interest. All in all, Hakuoki: Edo Blossoms doesn’t really break any new ground, but it is a solid Visual Novel from Idea Factory. 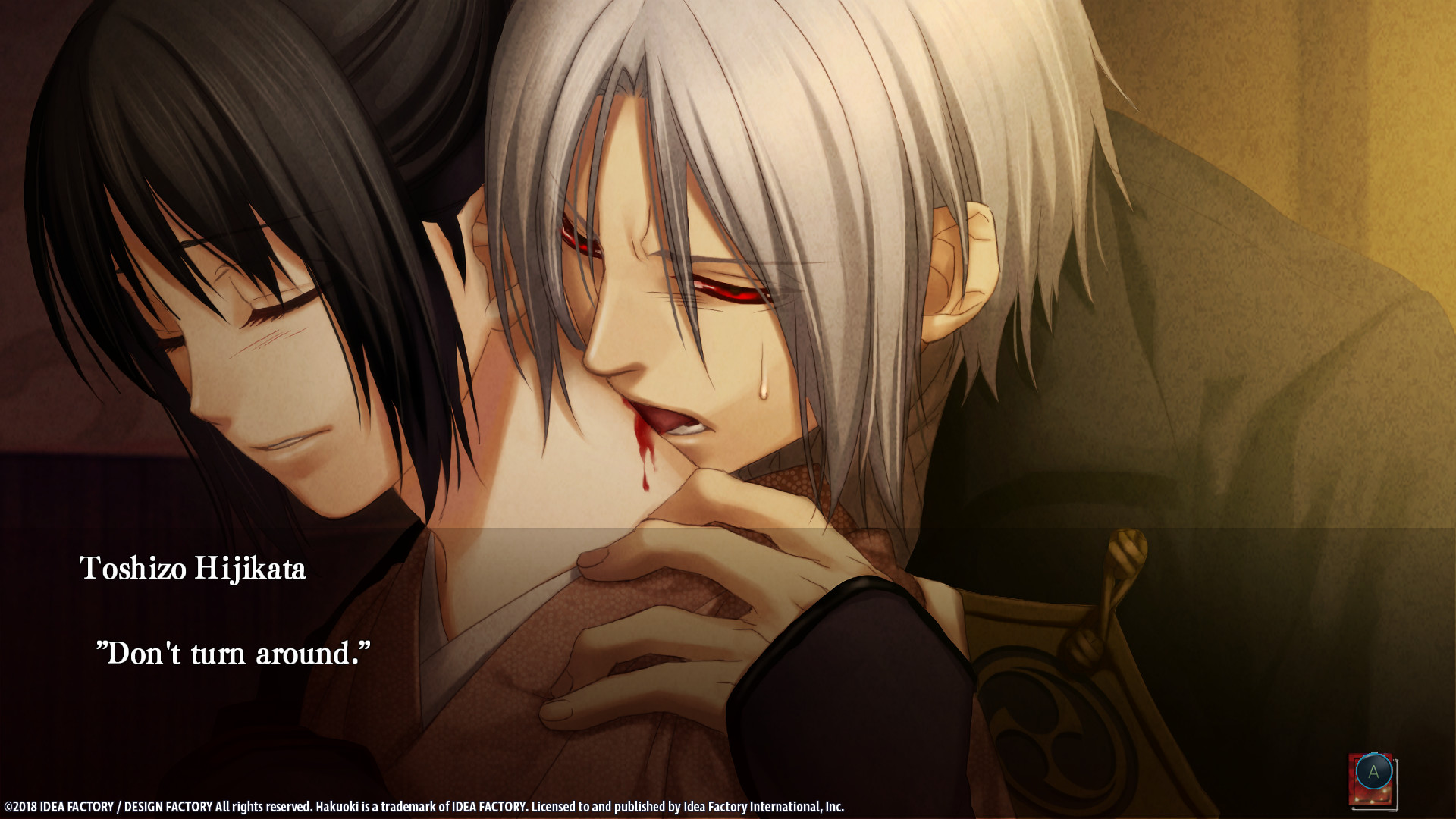