Delver is definitely a little roguelite gem that fans of the genre will love. It is well done in its relative simplicity, entertaining, and fair in the challenges it proposes. It might not have the variety or scope of other similar games, but in what it offers, it delivers solidly.

Delver is a roguelike first person dungeon crawler featuring procedurally generated levels and loot. In this game you will be impersonating an adventurer saved from death by a mysterious force and then forced to delve deeper and deeper into a sprawling ruin in order to retrieve a powerful artifact. The story, as you would expect from a roguelike, doesn’t tell us much. However, you will find hints scribbled on diaries and such as you progress in the dungeon. Delver is one of those roguelikes done the right way if you ask me, capable of delivering simple but solid gameplay and keeping it fresh for many runs. Also, its graphical style is rather unique and combines retro with modern tech elements, resulting in a pleasant experience.

General Gameplay
Delver’s gameplay is as classic roguelike as it can get. You begin in a forest, outside of the dungeon, where there is a camp nearby with some traders that will sell you stuff in exchange for the gold you got from all the previous runs where you died. Gold is the only thing you keep after death. Once equipped, you open the gates and get inside the abyss. You will find yourself in rather intricate, mutlti layered maps filled with chests and destructibles not to mention secrets to discover and upgrade your equipment with whatever you find. Constant changes in inventory are mandatory as all weapons and items wear down the more you use them, to the point of becoming broken. Killing enemies and exploring will give experience and level your character up once in a while. There you are able to select what attributes to upgrade from a list of 3 random ones, such as Speed, Health, Defense and so on. Armors and weapons you find can sometimes be enchanted, or enchant them yourself if you find the proper Scrolls to do so. Youc can also enhance existing attributes. For example, an armor can give you more health, or speed, or magical power. There is a finite number of enemies in each level and they often drop potions, items, and food. Potions are always random with their effects based on color, either good or bad. If thrown around they also explode. Food is always good and regenerates health over time as it will be your main source of healing. The gameplay goal is to get to the last floor, kill the boss, get the artifact, and run away all the way back before the dungeon collapses on your head. Overall, the gameplay Delver offers is fresh , has a good feel to it, and requires quite a bit of skill to get the timing right when facing enemies in melee. 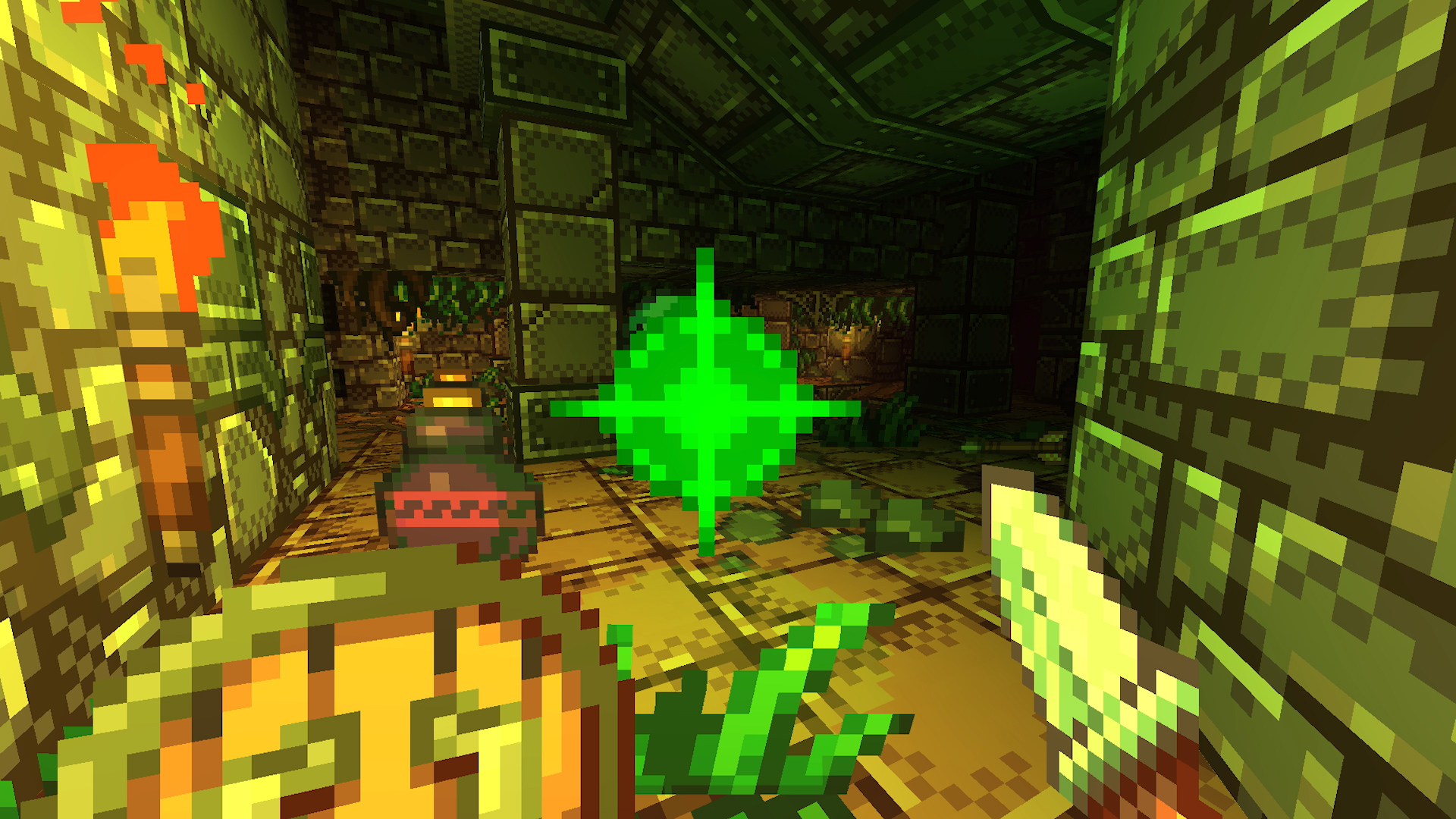 Combat System
Melee and ranged combat types in Delver are not that complex, but work quite well. Melee is based on two types of attack, a regular fast one and a charged one, which requires more time but is more powerful. Understanding how the character moves, when it is slowed or not by charged attacks, and the precise reach of different weapons is fundamental to hit enemies before they hit you, and is also one of the keys for conserving health for more difficult encounters. Ranged combat can be either Magical, with wands throwing different types of spells and having limited uses (once they are depleted you gotta find new ones) or bow and arrows, which are also limited and the bow can break after extensive use, but arrows can be recovered from dead enemies and walls most times, making accuracy key. Overall, I felt the combat was simple but effective, giving an easy to learn but fairly hard to master system to play with.

Content
It is a roguelike and in theory it offers endless replayability thanks to procedural generation and gameplay nature. Enemy and equipment variety is not THAT great to be fair, and while getting to the bottom of it, finishing a run alive and all can prove difficult and require many tries. I feel like after completing the game once or twice the variety given by procedural generation is not really enough to keep you playing a long time because of the absence of long term unlockables such as different characters, passive skills, and all of that stuff commonly found in roguelikes. Delver is a lite, barebones roguelike experience that is fun and all but not long lasting as other games of the same genre. 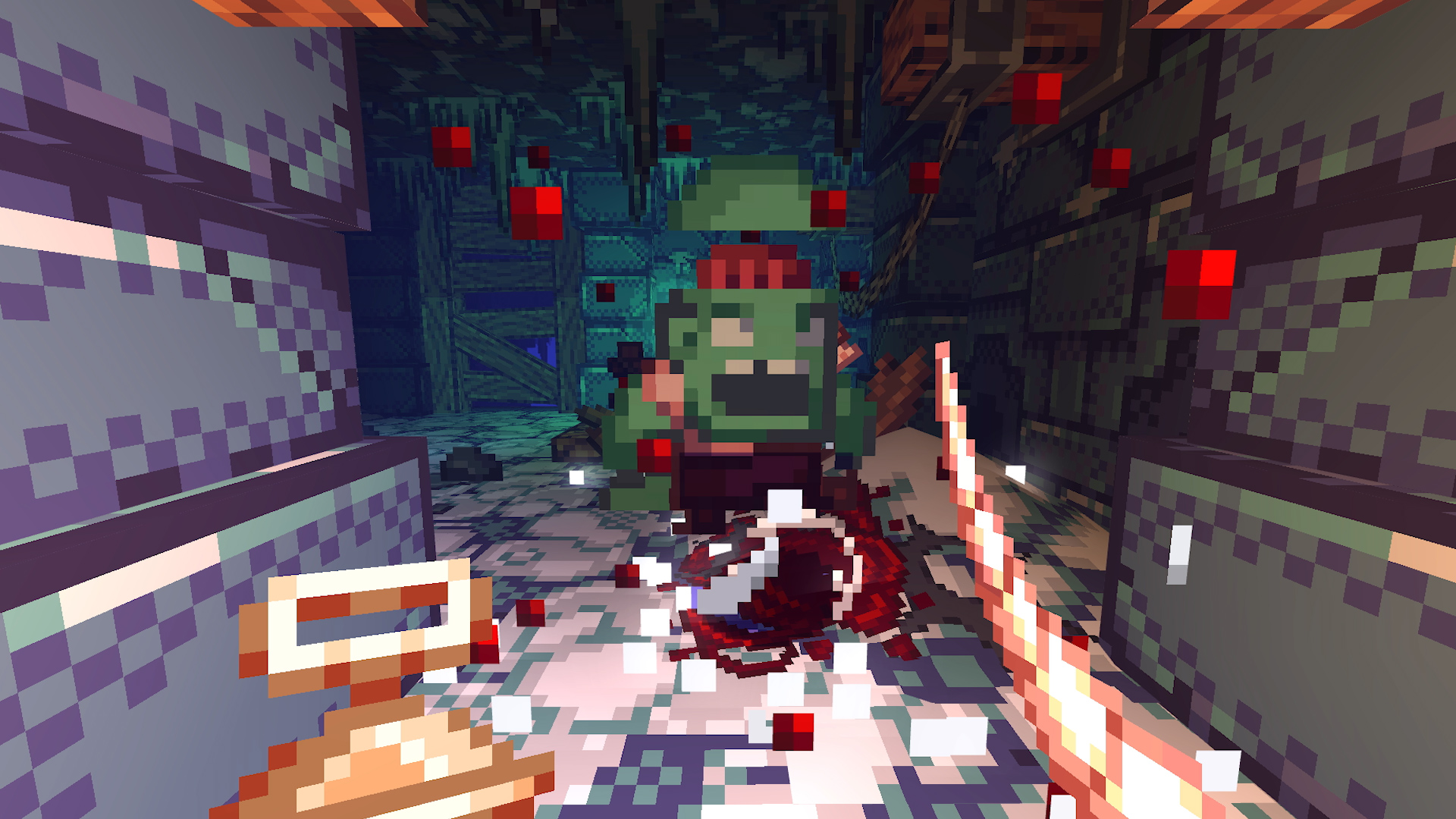 Balancing
The melee combat is fairly balanced and I saw no particular gimmick or cheese in it. Wands and magical warfare are also balanced because of the limited number of uses each wand has. The only unbalanced thing I honestly noticed were bows. Because of the range, you can mostly dodge / don’t care about enemies, throw all your arrows at them and then just get them back from the corpses. I mean, just strafing left and right while shooting arrows will get you through pretty much anything. On the enemy side I didn’t see any particularly overpowered enemies either.

Challenge
Like in any roguelike, challenge is heavily based on what stuff you find during the run. Find the good stuff and the game will still be fairly challenging but manageable. Find the wrong stuff and it will become a nightmare. Mastering melee combat and timings in attacks will be key to overcome the challenge, especially in later levels. Managing your inventory carefully also is important. Overall this game is pretty challenging and takes time to master. 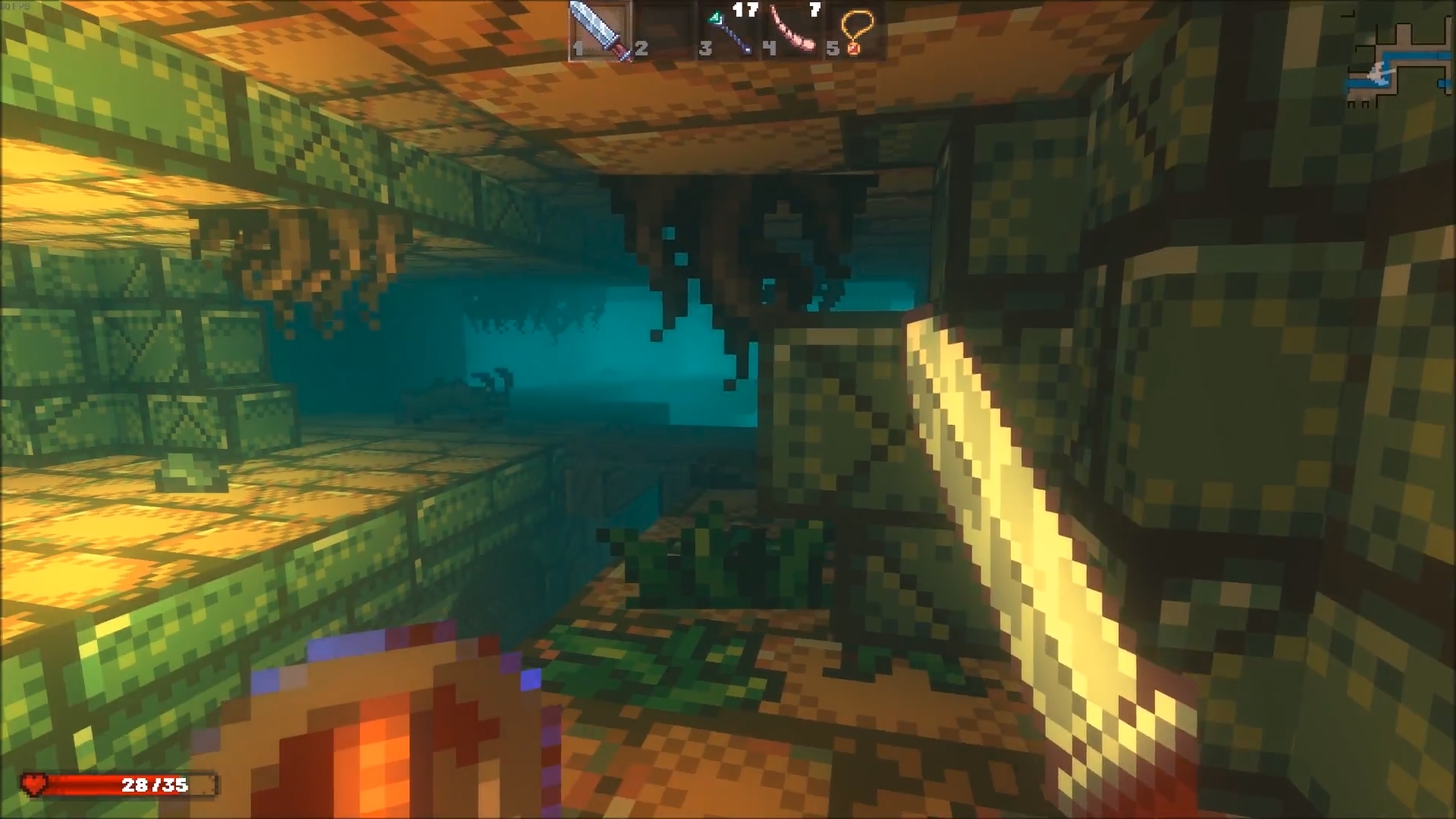 Graphics
Delver has a rather unique and interesting graphical style, very retro-ish but also refined and cured in its aspects. Just because something has a low-res style doesn’t mean it can’t be fancy, and this is exactly the case of Delver, which mixes retro graphics with modern elements like dynamic lighting and shaders, to offer a visually pleasant experience overall.

Sound
The sound effects and music are not spectacular, honestly quite basic especially the ones regarding hits, weapon sounds, environment interactions, but not terrible either. It does the job quite alright.

Performance
No issues to report.

AI
Enemy AI is quite more than the simple follow and attack AI of any game like this. Enemies will flee if wounded to regain strength, stay at a distance if ranged, and flee more distant if you approach them. Some enemies will understand when you are charging an attack and wait until you are off guard, charging another, to attack you. There is some cleverness in the enemy attack patterns and behaviors that I really liked, and will surely add something to the combat experience.

Quality of Life
No issues to report.

Bugs / Issues
No issues to report. 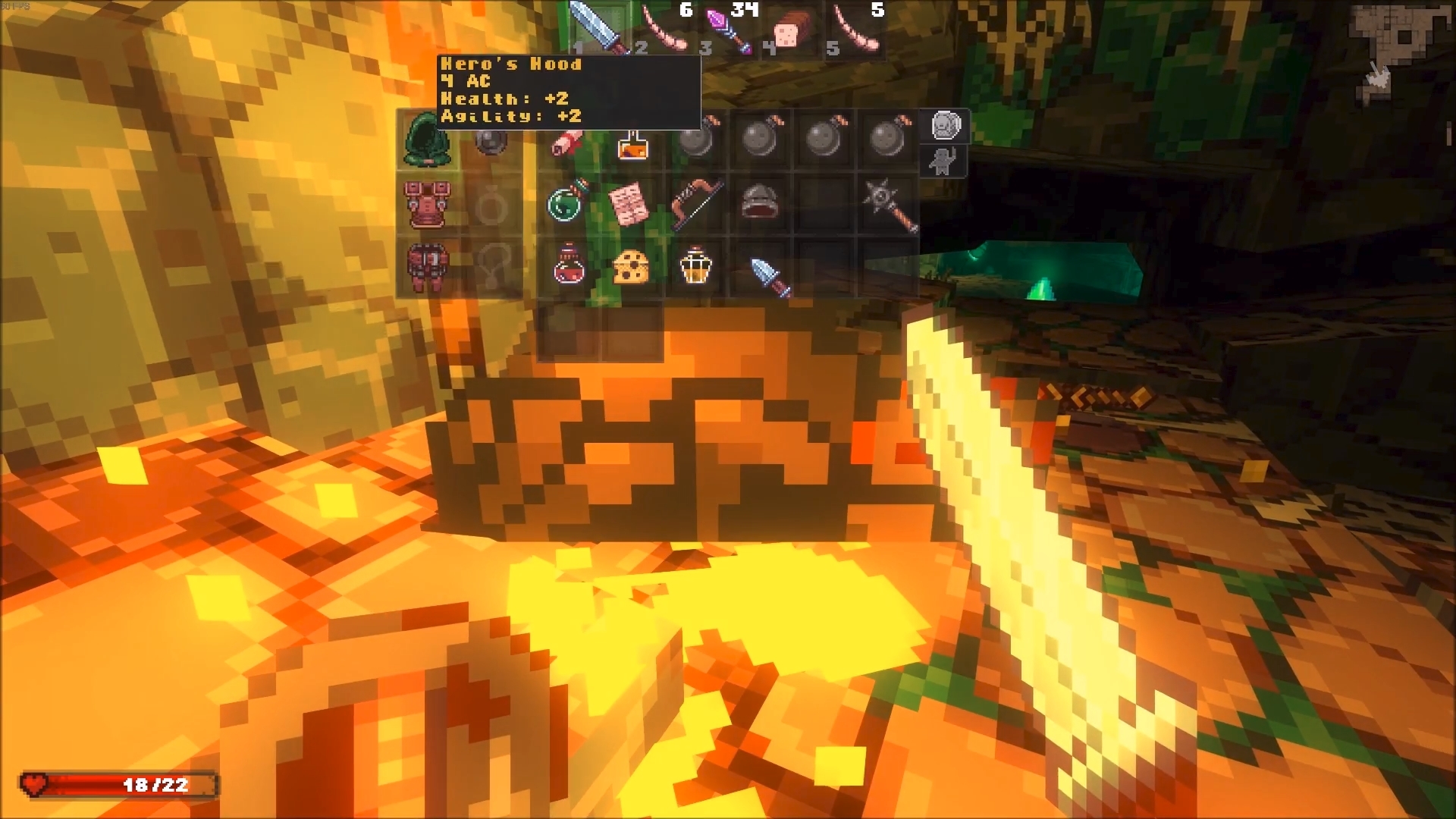 What can I say, Delver is a little shiny roguelike experience with some good ideas and well executed. You like roguelikes? Get it, for the price it comes at, I say it’s a good bargain for the quality it delivers.