Oooh we spoil you. The golden age of PC roguelites is here. Let’s take a good look at Haque. An interesting and refreshing take on the genre.

Choose your character and battle through forests, deserts, and dungeons to defeat a mysterious evil. Die often. Try again!

Explore a vibrant fantasy world falling apart at the seams.

An old man has asked you to complete a quest: purge the land of evil monsters!

What land is this? It doesn’t matter. Don’t ask too many questions.

Journey into the pixellated wilderness with your beloved pet at your side. Encounter dangerous foes, make some new allies, and challenge the reigning bosses. Ignore the mounting sense of dread. That’s normal.

My introduction to DOS PC gaming was Doom, which I played exclusively until I upgraded to Windows, so I missed out on the whole CGA/EGA era. That being said, I love pixel art and have a great fondness for anything retro.

Haque certainly is a throwback in looks, but has all the feel of a tightly coded modern title: the best of both worlds. In fact, I’m shocked at the level of quality, given the team size and budget. Much bigger titles don’t have the level of polish this game exudes.

Haque was officially launched back in September 2015 and a Kickstarter was successfully funded a month later. Developed by Kevin Cole and a few friends, under the banner of Supertry Studios, based in Boston, Massachusetts, the game hit the Steam storefront last November. In a recent podcast, Kevin recalls his inspiration for starting the project via two games, Azure Dreams on the original PlayStation and Nethack, the classic open source roguelike. 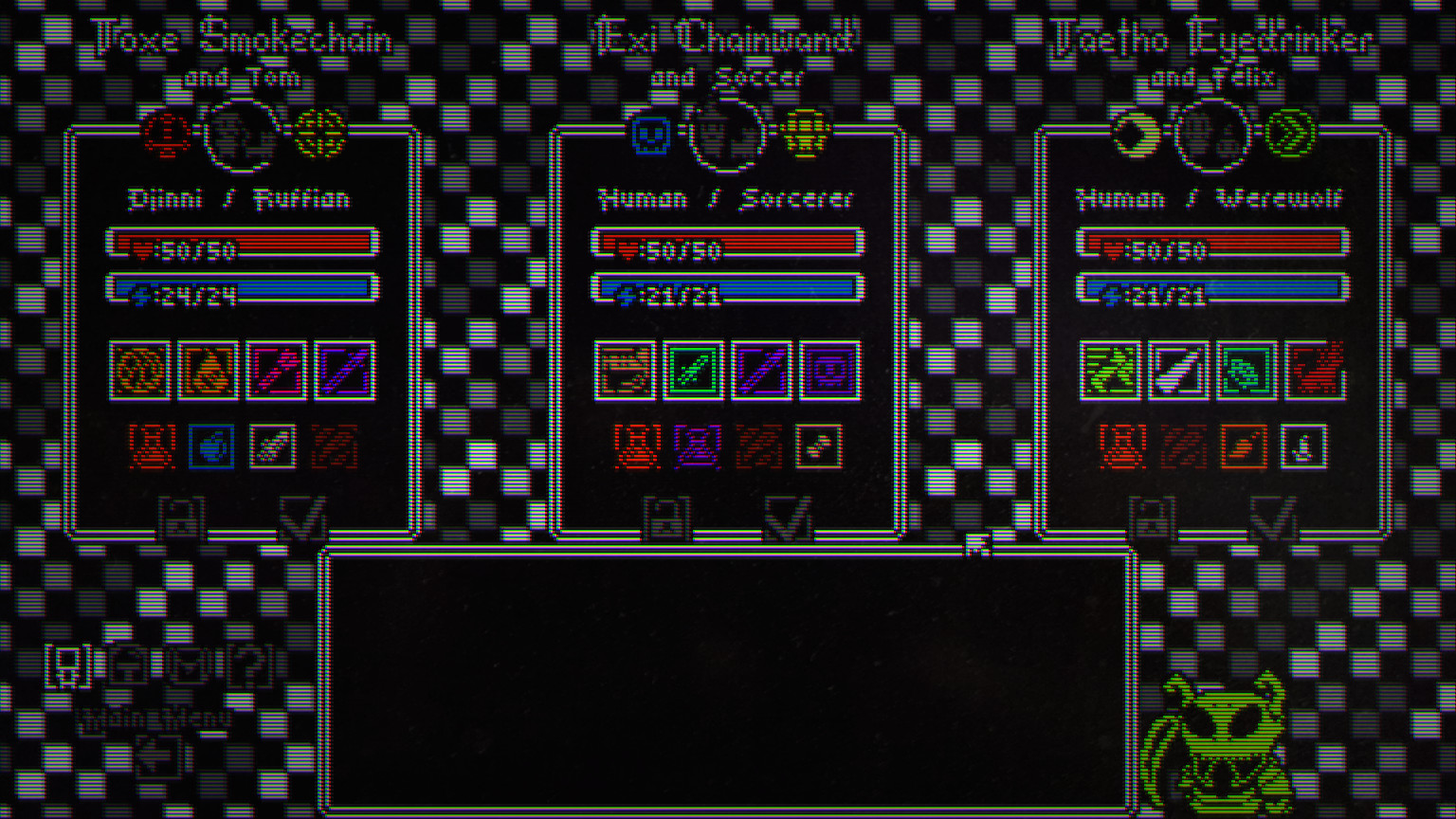 Yet again, Haque offers the player a fresh spin on the tried-and-trusted roguelike formula. There are none of the usual hunger, inventory weight, or level-up systems. Every time you start a new adventure, you pick from one of three completely random characters, each of which comes with its equipment, species, class, pet, and a bonus trait already generated. Not only is your kit pre-configured, but also your name. I’ve had the good fortune of picking from the likes of Raviour Wintertrumus, Acus Prismsun, and Mocfol Barbpit!

Characters have only four actions on their ability slots: one from their species, one from their class, and the last two determined by whatever they have equipped in their hands. Every time you complete a level, you choose from three different random upgrades. These upgrades can affect abilities your character already has, So if you find one effective, you can double down on its power. Other upgrades include item drops and critical hit chances. 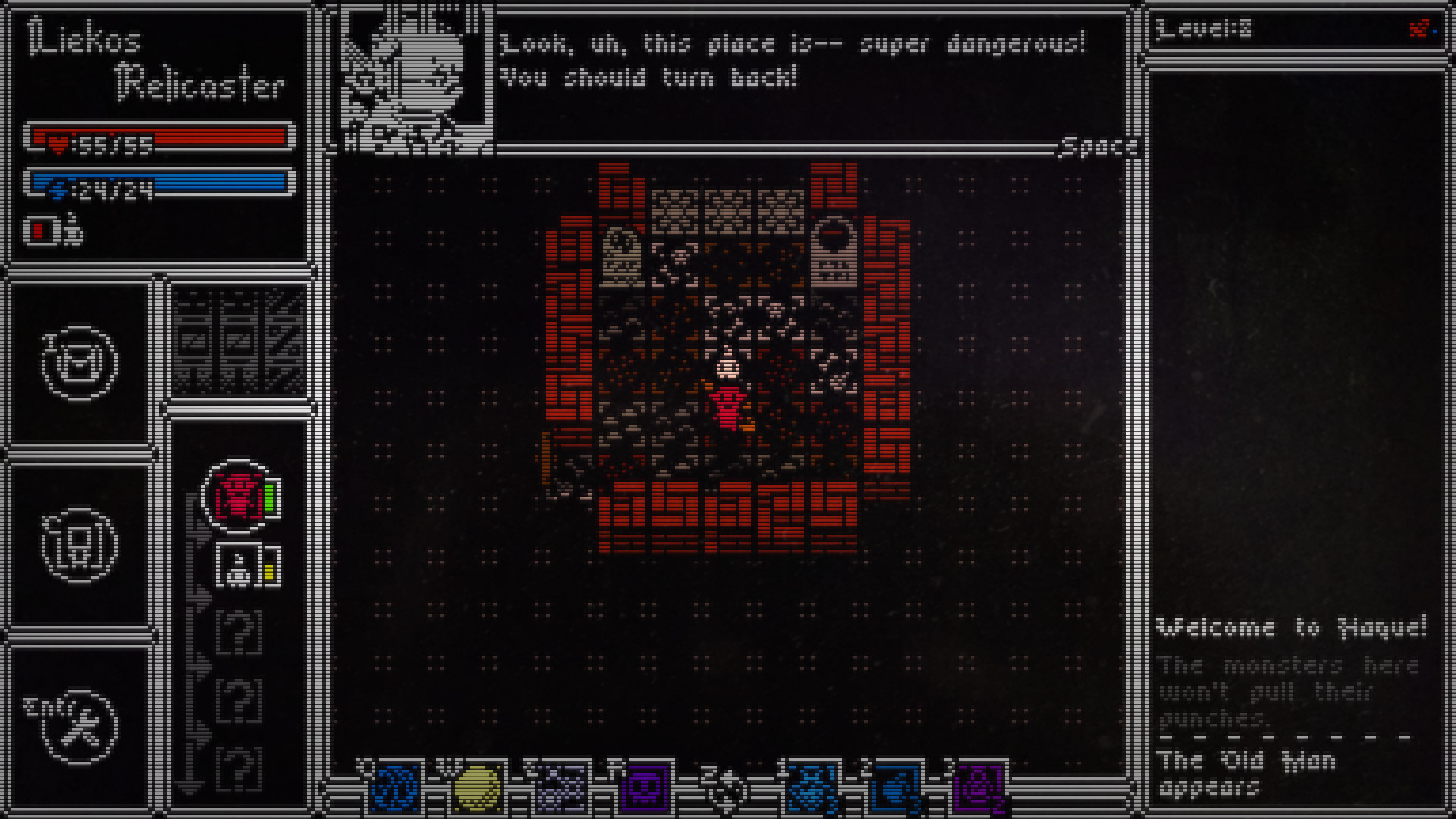 Each adventure consists of three levels and a boss battle. Each level is normally a three-by-three block, but these can have extra side rooms containing treasure chests, shops, and forges. This is then repeated with each boss battle. So far I’ve managed to best the first three villains.

Underpinning all this biffing and whacking is a whimsical narrative tale. The old man who guides you through the tutorial pipes up from time to time with charming flavour text, scolding you when your character falls and offering advice at random moments. After you beat a couple of bosses, his interjections become more abstract and cryptic. Perhaps all is not what it seems. I’ll not spoil what occurs next but the glitches in the game become more frequent and telling … . 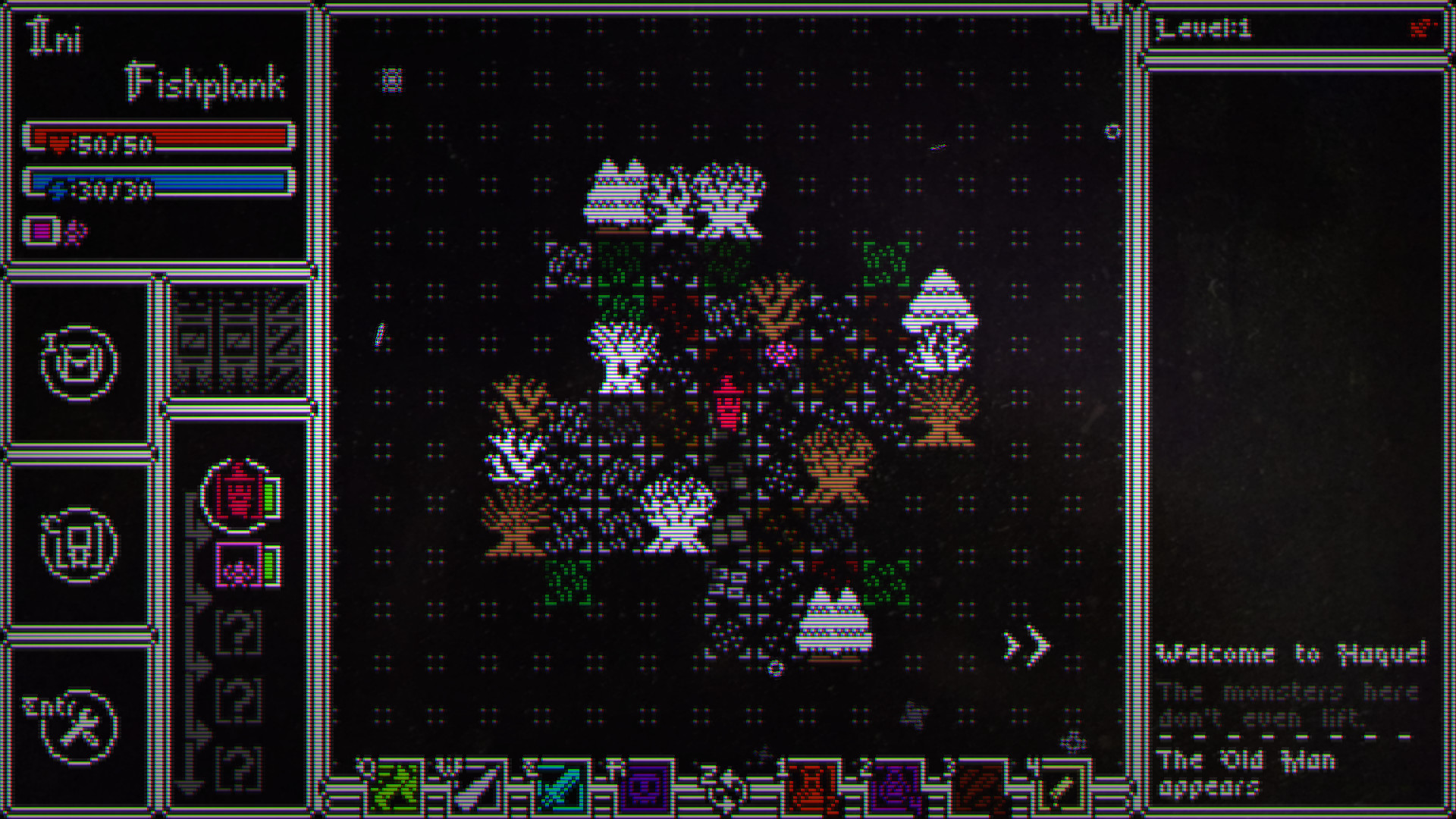 Given that there is no money system, shops are more akin to barter stations than traditional merchants. You can offer several items in your inventory for whatever the vendor is selling. A percentage meter gives you an indication of the chance of a successful transaction. Forges can meld weapons of the same metals to produce higher-grade items. You can also take a chance and try fusing a weapon or armour piece with an enemy corpse, potentially imbuing the item with the fallen foe’s characteristics.

Let’s get this out there Haque has some of the best sprite work I’ve seen in a game since the old classic Spectrum days. Fans of Ultimate Play the Game titles will appreciate the quality and skill involved in creating such art given the limitations of the size and colour depth. Not only is the sprite and tile work top draw, but the animations are on the same level. Environment and spot effects abound, bringing the whole world to life. Whacking slimes with a forceful strike reduces them to a screen-wide splatterfest. Golems are crushed into boulders. Skeleton archers shatter into myriad bone fragments. It’s compelling viewing and gives the player a sense of power when you know your weapon of choice is hitting hard.

Haque is a distorted love poem to the cathode-ray tube. I’ve witnessed some old emulation in my time in the shape of a bit of dot crawl and scan lines but this reproduction blows down the doors in its sheer scope and faithfulness. It transports me back to my old college days and some of the near-death systems I used to work on. Every fault you can imagine has been conjured up by some kind of software magic. Screen flicker, RGB split, and that unmistakable tube glow overlay the graphics. The game recreates that computer-lab feel beautifully, transporting you back in time to the days of bulky beige systems and all their quirks. To put the icing on the cake, there’s even a screen filth overlay to further add that dusty, techy realism, replete with smudges and random dirt spots.

Kevin’s goto music guy, Joe Kenneally, wrote the soundtrack. The main theme echoes Stardew Valley’s whimsical vibe: all analogue bleeps and crystalline chords. It’s one of those tunes that slowly seeps into your subconscious. Another notable track is the shop muzak theme. This is a no-frills electric piano ditty that fits the silly, off-beat nature of the project. Yet again this reminded me of another title’s vibe: this time, Animal Crossing. Luckily you don’t have to face the horror of Tom Nook in this game.

The spot effects are cool. The rain effect uses some kind of 8-bit pink noise sample or generator and sounds suitably retro. As your character edges closer to death, every move is echoed by what sounds like an ancient IBM Model M keyboard clack: that legendary sound which evokes many late nights coding assembly language routines in a deserted computer science classroom. 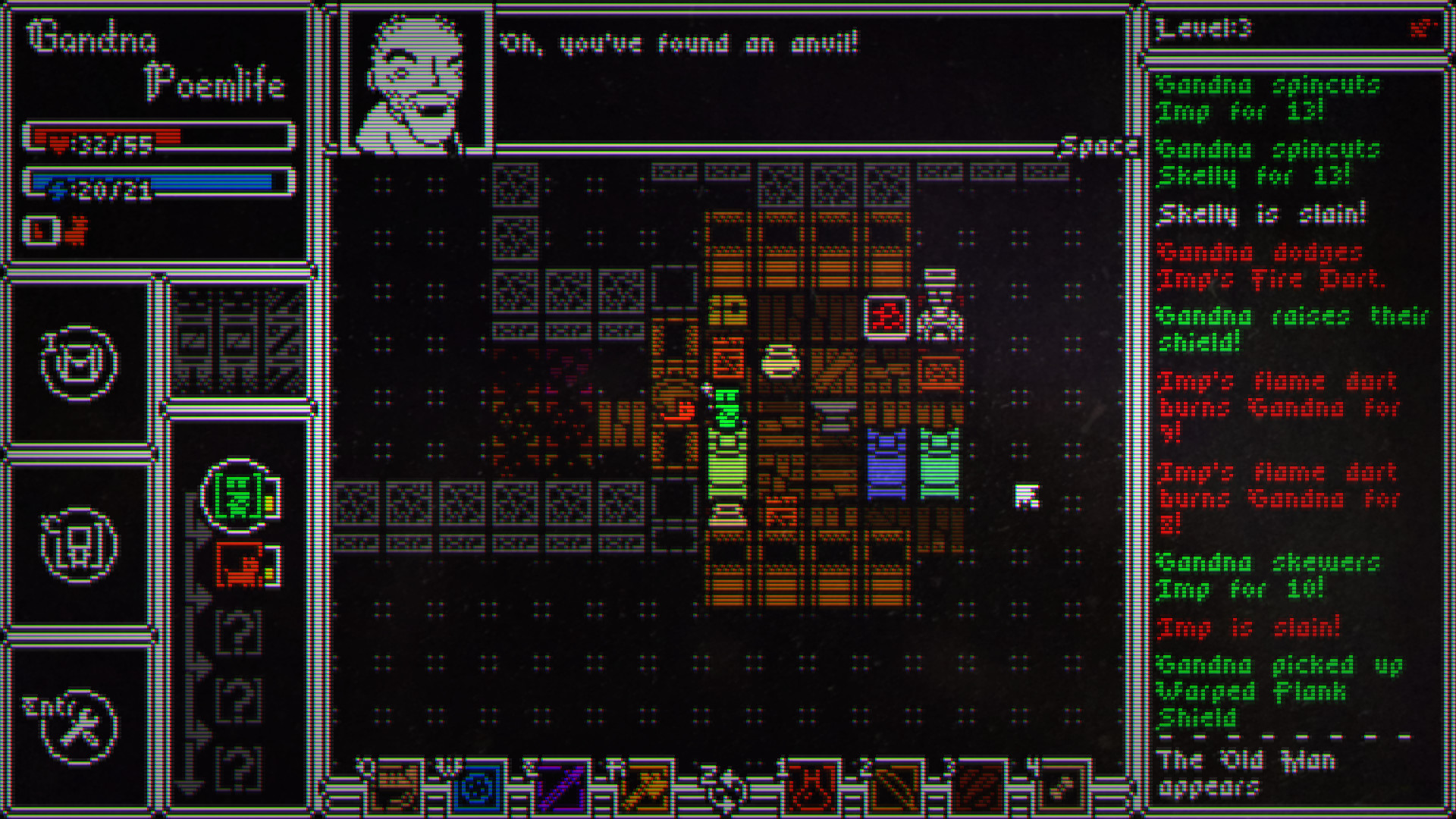 Haque has a comprehensive suite of options. The best I’ve seen in a long, long time and putting to shame Taito’s lacklustre PC port effort that was my last review.

Let’s start with the controls. All the keyboard controls can have two separate bindings. Gamepads have one. A unique option that I’ve not come across before is the ability to set the button skin to Xbox, PlayStation, or a generic gamepad. Cool beans. Mouse control is out of the box and works wonderfully well; it has been my primary input device for my review sessions. Sound has two sliders for volume and music levels.

Given one of the selling points of the title is the CRT emulation, this has a ton of tweaks to suit all tastes, from just a smattering of old-school flicker to a screen display that’s about to pop its clogs. The various toggles allow after image, screen garble, screen shake, RGB split, and v-sync. There are also sliders to add screen filth, scan lines, glow, and umbra. The last setting I had to ask Google what it affects: it basically adds a vignette to the outer edge of the screen.

On the gameplay front you can set an enemy spiciness slider, which changes the difficulty level for the hardcore player. There are also toggles for bigger maps, no freebie items, and flawed foes and heroes. 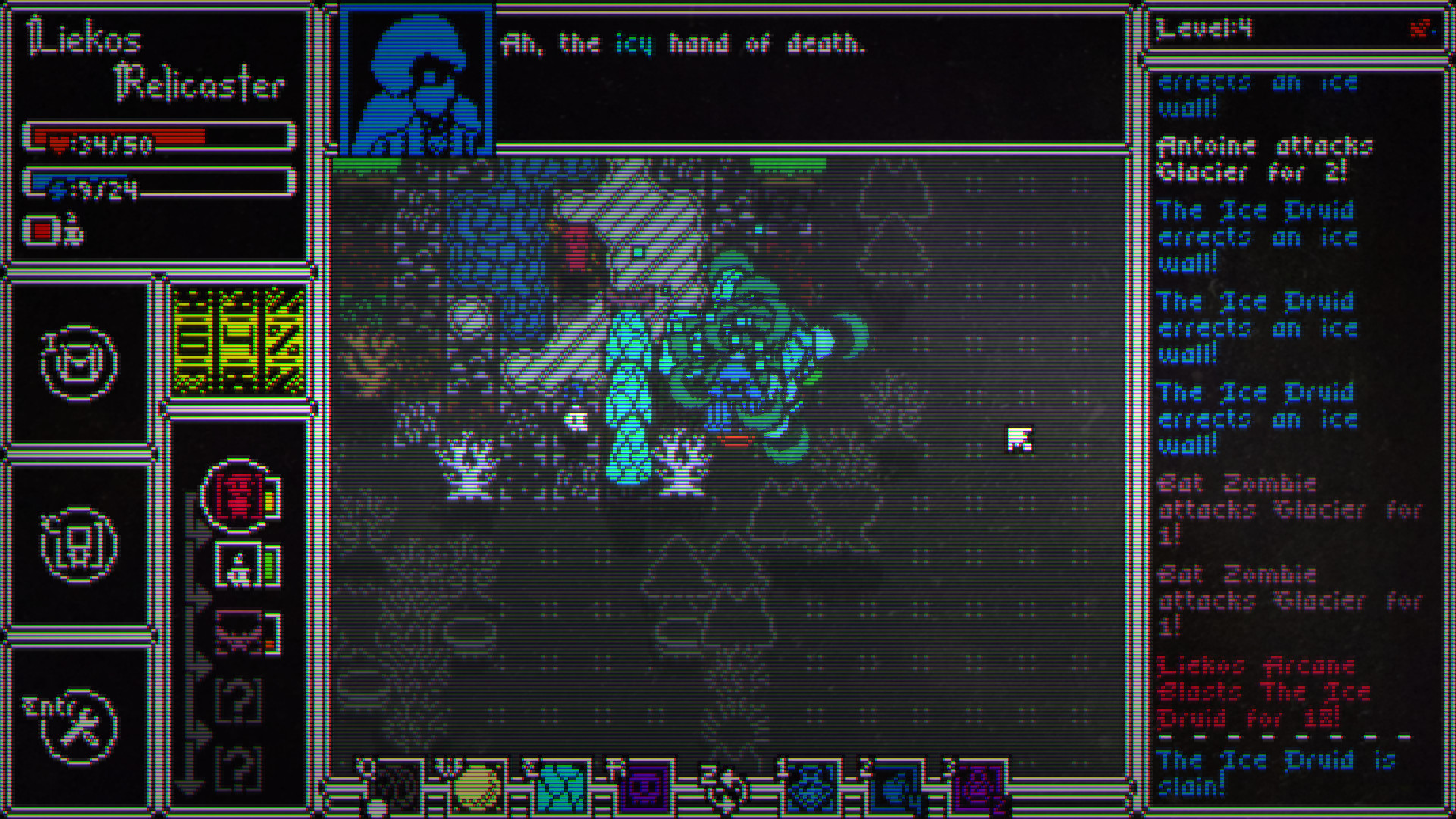 At first glance, Haque might come off as a trite roguelike wannabe with an all-knowing whimsy, complete with a retro aesthetic. It’s none of these things. Instead, I found to my pleasure that it’s a tightly coded fresh spin on the genre, with a genuinely funny and well-written narrative. After you beat a few bosses an underlying weirdness takes hold of the game and the CRT emulation that you thought was mere old-school hipster varnish becomes core to the whole experience.

Haque’s bite-size gameplay and taut combat loop are superbly crafted. For anyone looking for a new and inventive take on dungeon crawling, Haque is a solid choice: highly recommended.