The critically acclaimed update to the Space Invaders franchise is here to invade Steam with greatly improved graphics and audio!

Packed with pulsing, vibrant visuals enhanced further by interactive sound. The invaders have evolved, the question is: can you keep up?

Learn the intricacies of the scoring system and use that knowledge to conquer the leaderboards!

Who will prevail in this battle to become the world champion?!

My first introduction to the world of videos games was Pong. My eldest brother bought it for the whole family to play one Christmas. This was to get away from the common board game sessions we would normally have over the festive period. Two player tennis was a hoot! And brought out a competitive edge even from my normally sedate aunty and uncles.

My next encounter was during a day out to the “delightful” seaside town of Southport. It was raining as is always the case when visiting the Lancashire(now Merseyside) coastal resort in mid-June. So my parents gave me some pocket money to play on the penny falls and one arm bandits. Hidden at the back of the arcade was a curious machine that was making strange beeps and blop sounds. I was instantly transfixed by the visuals and audio FX, even before I had put any coins into the cabinet. This was my introduction to Space Invaders. The “one more go” addiction has never left me. 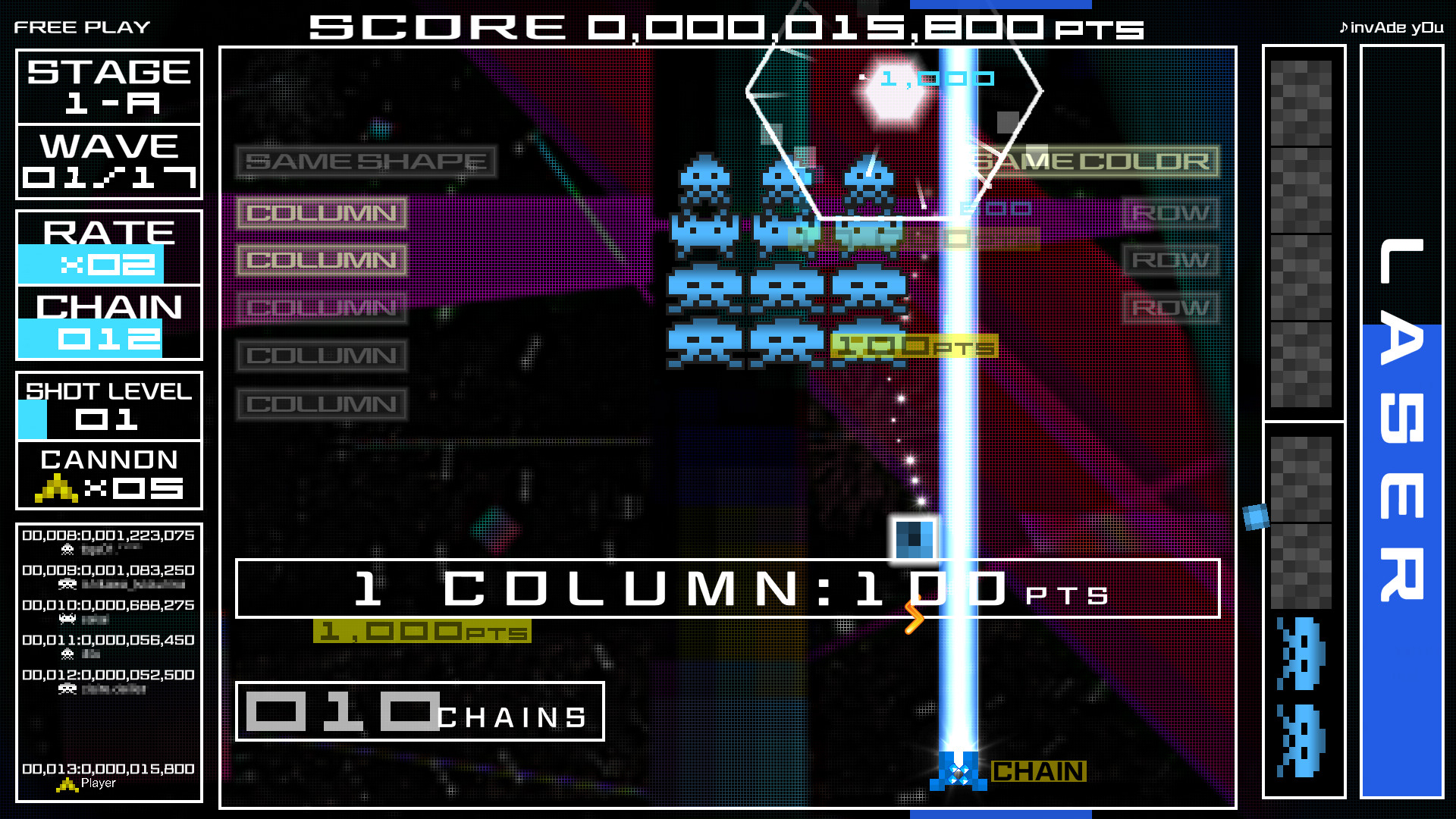 The essence of the original arcade game remains intact. The simple yet compulsive gameplay is in place but has been redefined for the modern era. The only missing feature is the four defensive shields or bases at the bottom of the play field. The classic army of descending aliens rows has been upgraded to various attack formations. Shooting different sizes and colour combination foes offer combo bonuses which the player can unlock. If you chain together four red enemies, you’ll get a bomb power-up. A green chain gets broadshot, blue; a laser beam and grey gives the player’s ship a shield.

The patrolling UFO at the top of the screen yields more rewards and opens up bonus levels dependant on its colour. Defeating a yellow UFO triggers a roulette wave which can reward with points, play screen freeze or a companion ship for twice the firepower. A red UFO unlocks a bonus stage of swooping foes. If completed this unlocks a “fever” mode back on the standard stages. During fever, the cannon is given a powered-up weapon, making destroying waves much easier. A bonus is added to the score depending on how many invaders are shot down within the time limit.

These many layers of combos and modes add more spice to the original mix. Lifting the game from its origins to more like a Galaga variant, yet still maintaining the core shooting mechanic. 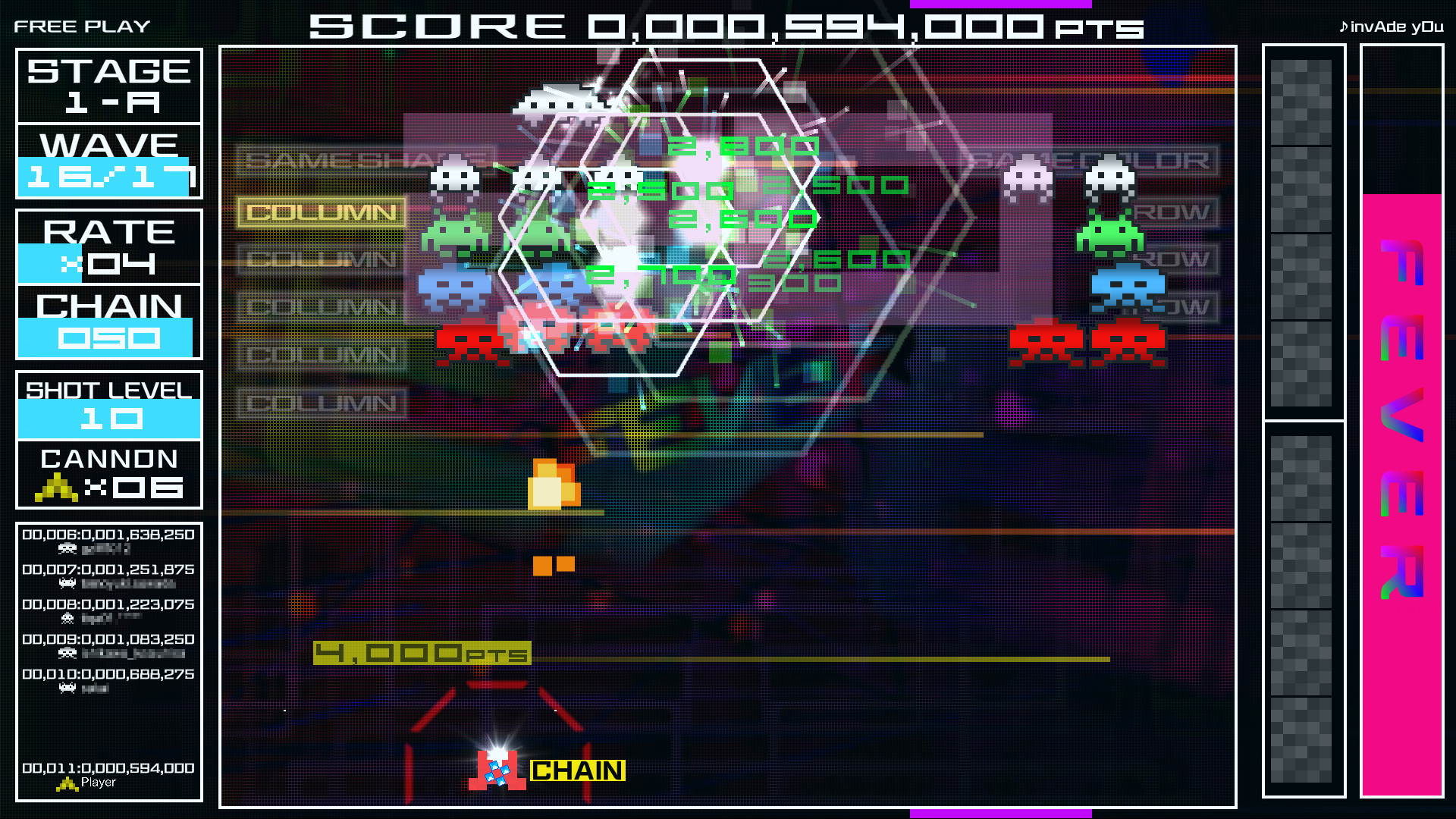 Arcade is the base mode, which lets you advance along a branching path of five stages, the last three are broken up into easy and hard tiers. These can be unlocked by achieving A or S rank scores in the previous stage. Each stage ends with a unique boss fight that takes a specific strategy to complete. The total 16 stages all have unique attack patterns and bosses whose strategy adapts according to the difficulty level. The game automatically saves player progress just after the result screen. There is only one save slot, so choosing continue will restart the game from where the last play session ended. Free play mode allows you to play any stage completed in Arcade Mode. This a is a great mode for quick high score chasing. Allowing you to compete with friends and folk from all over the world. Getting your fever mode in early in the session is vital for racking up points for extra bragging rights. 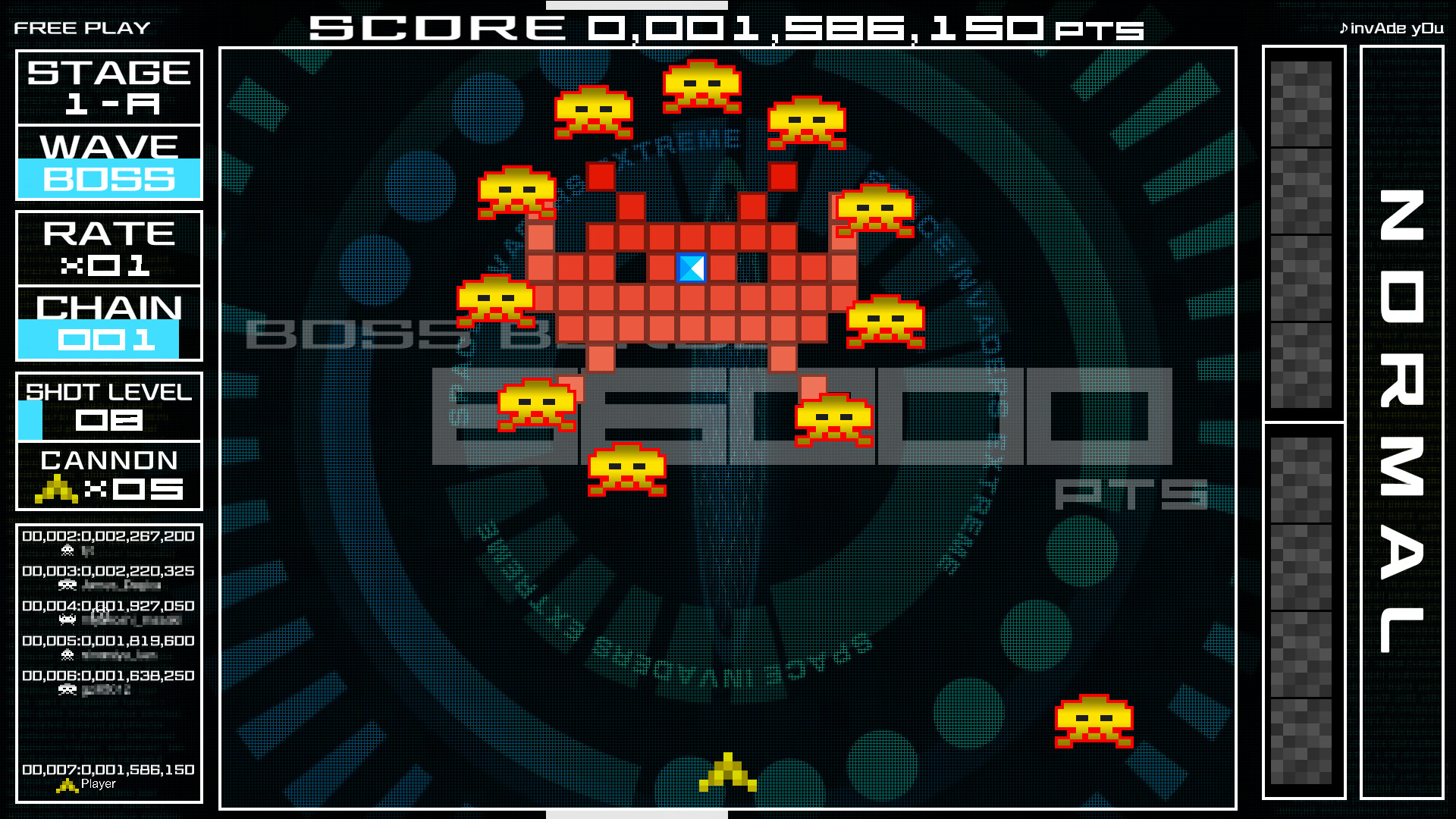 Taito has remained faithful to the original pixel art. Using the old sprite shapes as a foundation, they have embellished them with myriad different effects from scaling, colour schemes and strobing treatments. The end result is a wonderful combination of arcade nostalgia and funky retro appeal.

The light synth tech background created by Jeff Minter for the 360 release has been abandoned in favour of the mesmerizing original DS animations. These have been upscaled and add yet another layer of intoxicating imagery. 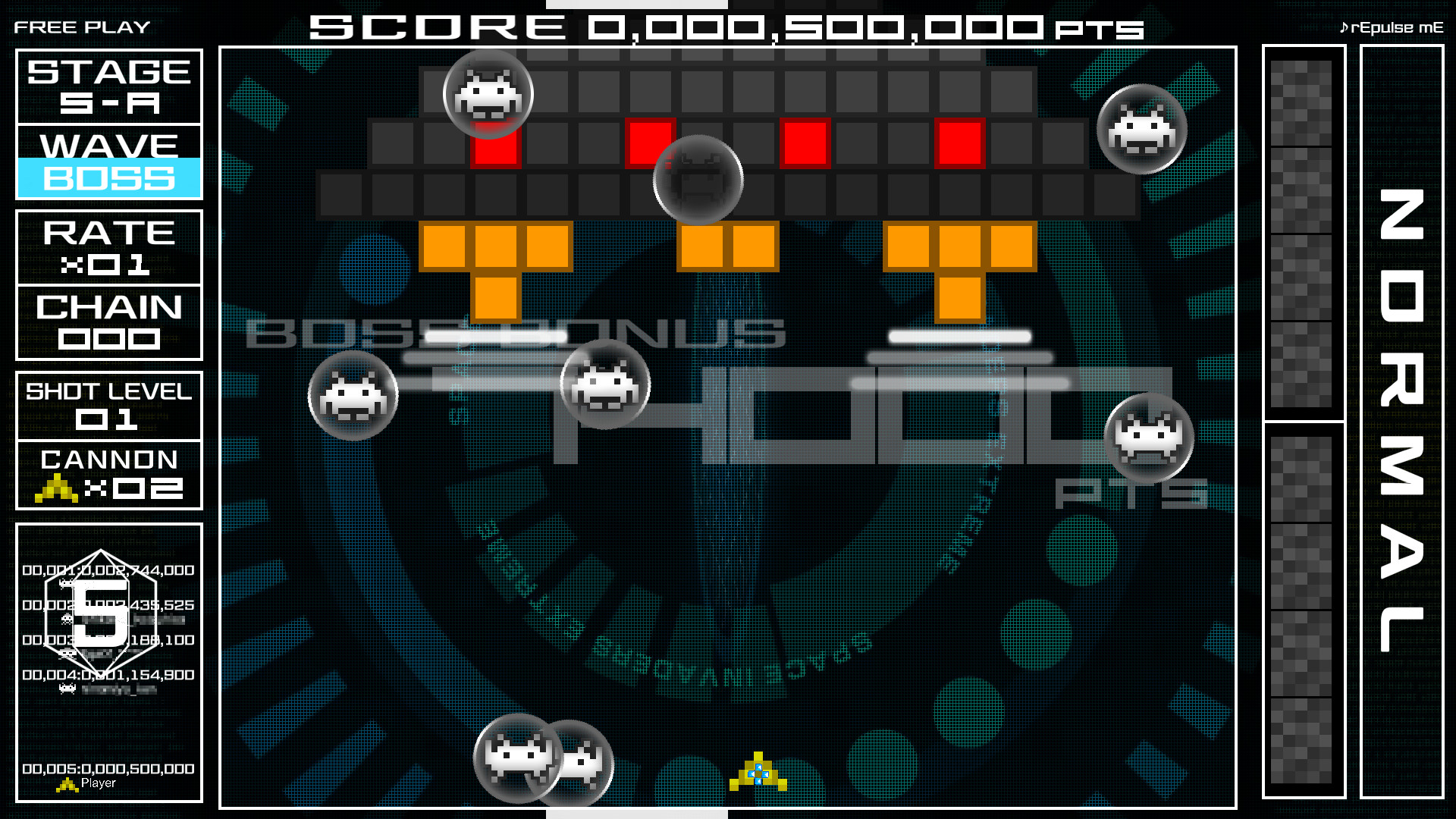 The soundtrack is absolutely stellar. The full force of the DS OST has been converted and can now be enjoyed in all its glory. Thumping ‘90s style Japanese Techno is the order of the day. Created by Taito’s very own Zuntata. It complements the visuals perfectly. Composed by Yasuyuki Suzuki, Mitsugu Suzuki, and Hirokazu Koshio. Right out of the gate the main menu theme busts an insistent driving beat replete with bubbling baseline, arps and repeated minimal scales. It’s pure techno bubblegum but does the trick. The two-note string pad layer adds a strident play me vibe. Raise your gamepad ravers.

Stage 4A evokes early era Orbital’s work. A superb killer bassline with an infectious discordant countermelody. It still sounds super fresh. One of the standout tracks that I could happily listen to outside of the game.

Taking inspiration from Rez. Each shot fired triggers a sample FX layered over the main tune, creating a unique melody structure. Hitting and destroying enemies adds extra percussive layers. This adds an extra level of immersion into the game.

PC options are very limited. There is no menu for selecting custom resolutions, aspect ratios, any kind of anti-aliasing technology, or v-sync. I presume the title auto-detects the desktop resolution and scales to that setting. This is far from ideal given the many variations of TV and monitors out there in the wilds. The frame rate appears locked at 60 frames per second. Both my systems hit this performance and remained solid throughout my review process.

Steam controller, 360 gamepads and keyboard are supported. There is no option rebind any of the keys or buttons. The original DS game had the ability to support the stylus, so I was expecting some kind of mouse support. This is also sadly missing from the PC port.

The mesmerizing background animation can be toggled on or off. It also has five brightness settings to whatever is appropriate for the individual gamer and their sensitivity to flashing /strobing graphics. Music, sound FX and overall volume have five levels to tweak. 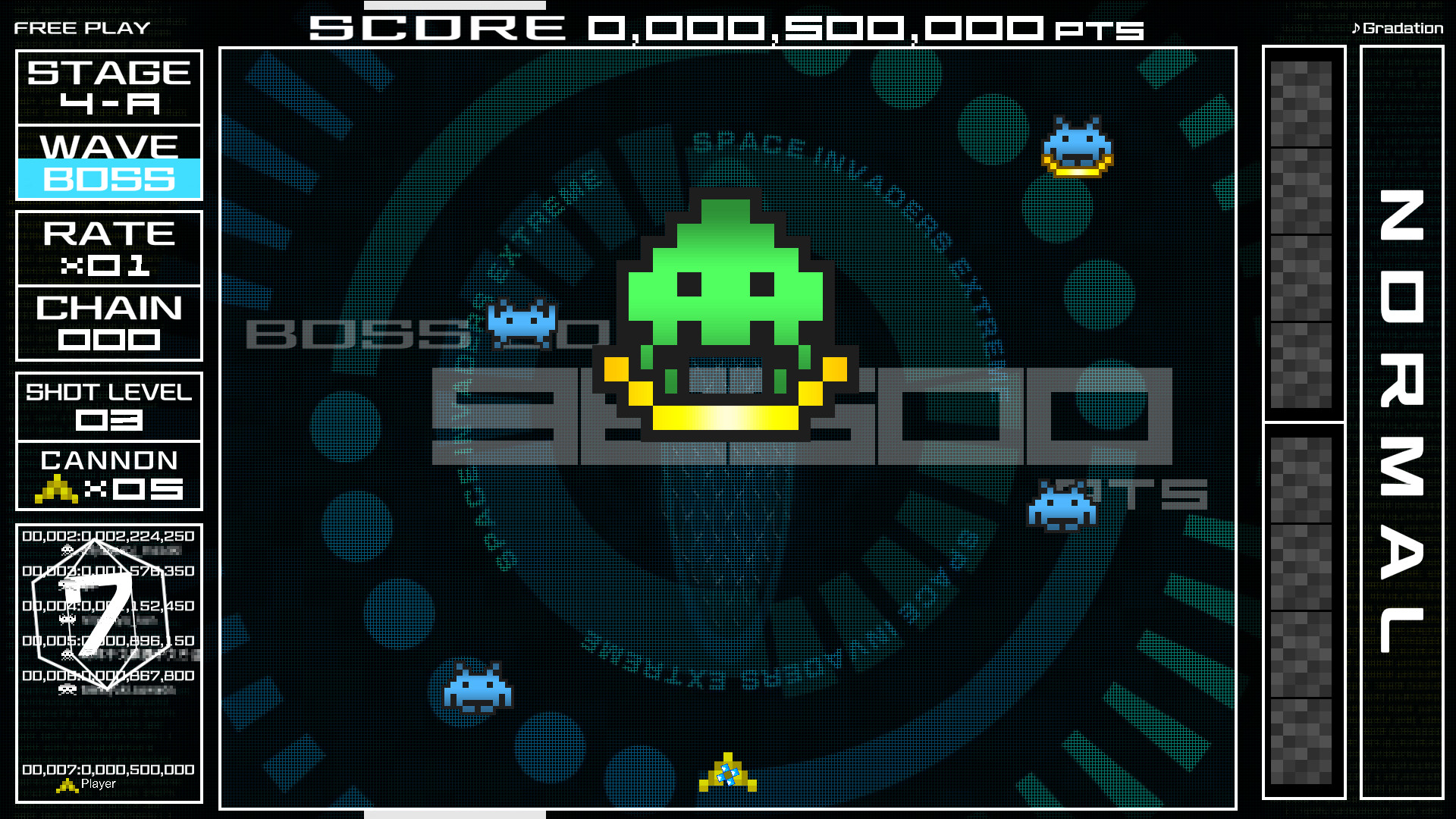 Taito has done a great job of converting the classic DS title. It’s a fantastic ode to a landmark arcade game. Its legacy has not been tarnished. This takes everything that was good about original concept and wrapped it into a super cool retro inspired kaleidoscopic trip. It offers many hours of arcade fun as you try to best your own high score or compete with friends for the bragging rights for the overall Shoot em up champion. Perhaps it’s only weak points are its feature set and Steam store price. For purists of the genre, it’s an essential purchase.