Trash Squad is a top down roguelike shooter done the right way that delivers solid gameplay with deep character customization and progression.

Trash Squad is a top-down, 2D bullet hell roguelike shooter set in a rather unique universe where trash literally became alive and threatened to destroy an entire city. To stop this an elite team of “cleaners” comes in and takes on the arduous task of cleaning up all the sentient trash to restore peace. Aside from the story incipit, which is rather original, the core gameplay features are typical of top down bullet hell games (i.e. Nuclear Throne) as you will read further in the review. Overall, Trash Squad may be a low budget indie shooter but does many gameplay mechanics right and so the overall experience with it is quite fluid and fun at every run, and kept fresh by the procedural generation.

General Gameplay
In Trash Squad, you will have to choose one of several heroes and then lead him into knee-deep mountains of trash filled with dangerous enemies with the sole purpose of clearing out all of them. First of all, there is a Preparation Screen where you will be able to choose not only your hero, like in most roguelike shooters, but also weapons, companions, pets, and accessories that will help in your journey. At first the selection of said things will be very limited, as most of them will be unlocked by fulfilling certain requirements in the various runs you will perform. Basically, the more you play, the more stuff you unlock to customize your heroes with at the start of each run. This level of customization is not common in the genre, often limiting only to which hero to choose. Once you have selected the loadout, the run will begin, and your duty will be to kill all enemies in each of the procedurally-generated levels, filled with random items, altars, traders and secrets to give a different experience each time. The variety of stuff you can find in each level is quite high: mini-bosses, portals to secret levels, different enemies in the same biomes are some of the features that really keep the game fresh and interesting each new run, other than a great abundance of weapons and secondary items. The things that matter most in this type of gameplay are obviously individual skill and reflexes to dodge the considerable amount of shots directed at you. Items and equipment certainly give a big help, but will only get you so far. The presence of a Level Progression system that allows you to spend attribute points in things such as Bullet Damage, Max HP, Critical Chance and so on, along with a wide variety of passive, permanent talents, certainly is a welcome addition and improves character customization as the run progresses.

Combat System
Trash Squad‘s combat is the classic, fast, brutal combat you would expect from a top down roguelike shooter, filled with bullets and enemies around every corner, few health pickups, limited ammo for all weapons excpet primary ones, and generally limited money and resources. As far as hit registrations, collisions and so on, the combat is good enough and personally I have not seen any sign of unfairness or elements that could compromise the experience. It gets really tough in the late levels but the challenge is always fair, and that is how it should be. Oh yeah, and some bosses will really kick you to the ground.

Content
There is literally a ton of stuff to unlock along with achievements and challenges that will give you not only some badges but also unlock gameplay elements to select before each run.  It really is worth it to pursue such challenges. The presence of different game modes with specific rule sets improves the experience considerably if you get tired of the normal mode. Since game has a roguelike, run-based style, there is no specific lenght I can give you, you play as long as you have unlocked everything, I suppose.  This could take a considerable amount of time depending on each player’s individual skill and strategies.

Balancing
As far as I’ve seen there are no overpowered things for enemies or for the player.  The balance is quite fair, in fact, and it will never lead to those situations where you, or the enemies, are too overpowered in certain situations. Some skills and passive trait combinations are really powerful but that is fair because the challenge increases dramatically the longer the game goes on. Balance is decently done in conclusion.

Challenge
After 3-4 stages and beating the first boss, the challenge spikes up dramatically and you WILL need skill and good equipment to make it out alive against barrages of AoE surfaces, projectiles, explosions and who knows what else. This is a game that requires quick wits and dedication to fully understand and strategize against its perils. 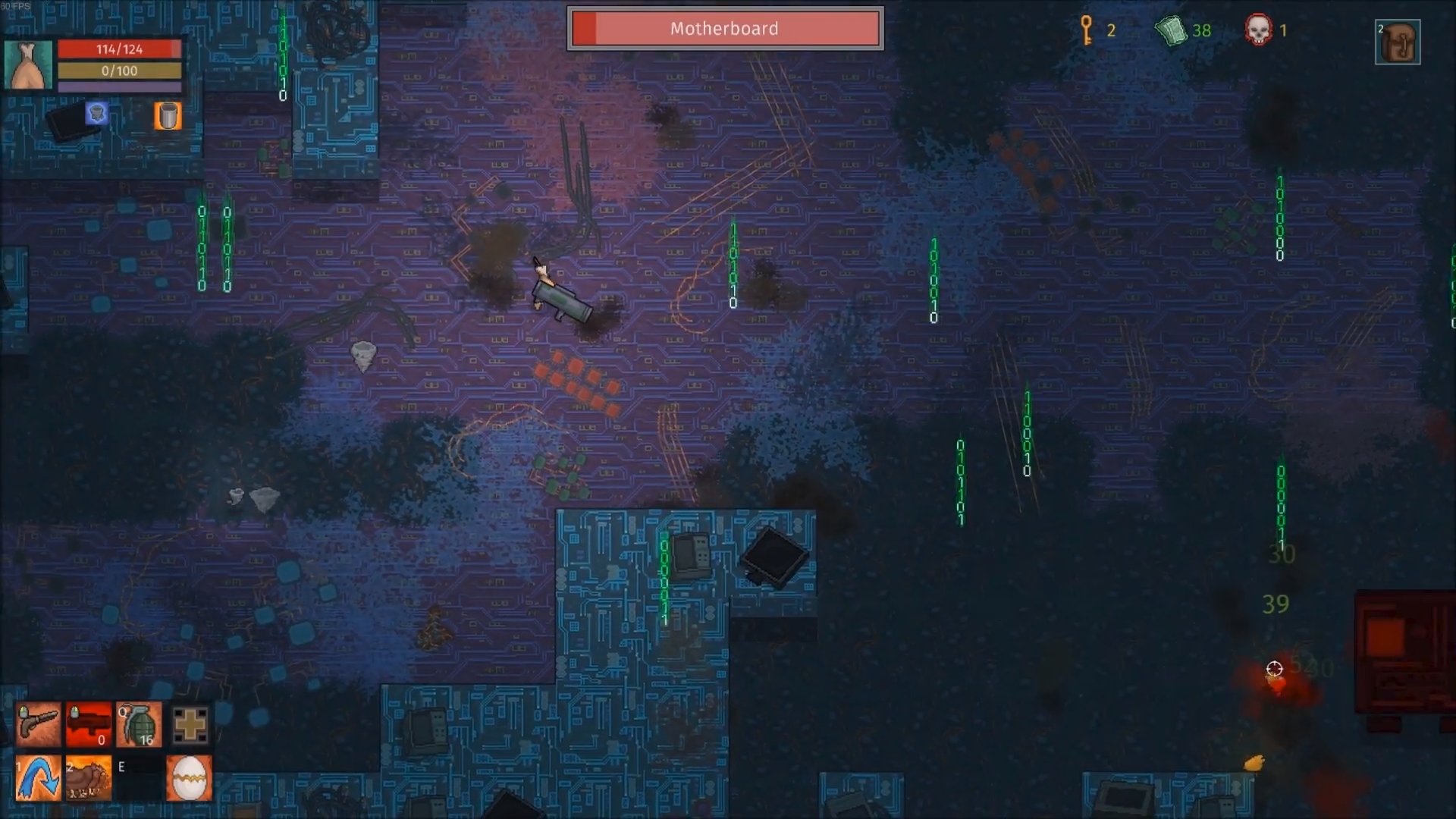 Graphics
The 2D, low definition pixelated graphics are obviously a style choice by the developers, and works out quite well especially in this particular type of game. Even if the game has this art style, you can see it is polished well and generally graphically well done in its way. Having a bit more detail such as displaying corpses of the enemies staying on the ground, dead, or some more goo spitting out of enemies and coloring the map would have been a great addition that the developers did not add.  Overall, though, the graphic style with respect to the type of game is decent enough.

Sound
The soundtrack is frankly quite anonymous and are nothing special at all. The same can be sid of the sound effects of various weapons, They all have in common a retro-ish feeling but that’s all I can give to that, a generic sound compartment without infamy and without praise.

AI
Enemy AI is, as you would expect, the typical “run around and shoot” type of shoot em ups, with exceptions made for Bosses which have some skills that are used periodically to add to their default attack patterns.

Quality of Life
There are no particular problems here. The interface is clean enough and the controls are good. As for using consumables and such, I foound no issues regarding the controls with mouse and keyboard.

Bugs / Issues
No problems to report. 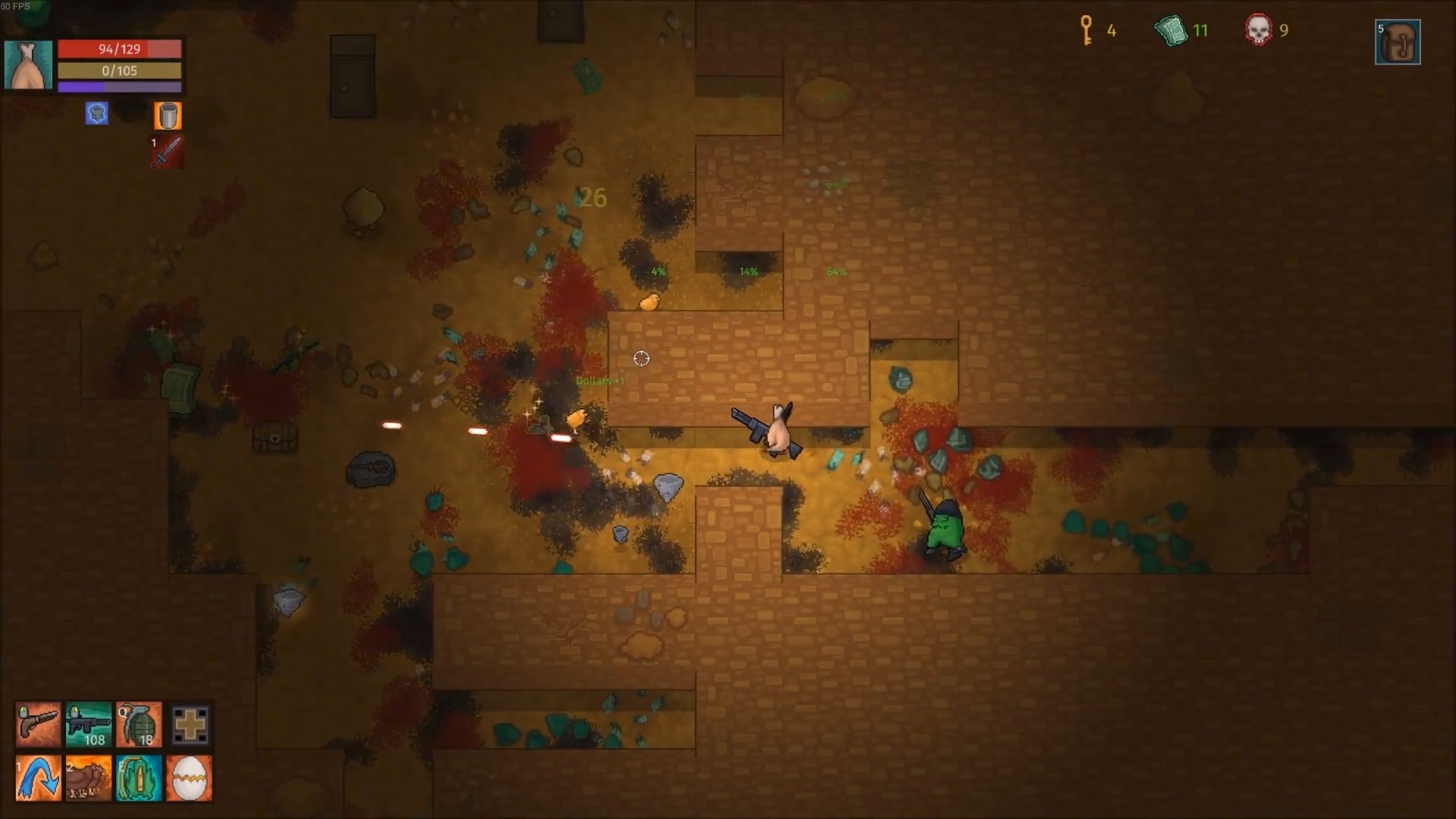 Trash Squad is surely an interesting roguelike shooter that conveys the core gameplay experience in the right way and adds some improvements to it that, overall, work decently enough. If you are in for a challenge and also like unlocking tons of stuff such aachievementsns and so on, this is a game you should get.