REVIEW: A Case of Distrust

I contradict you with…THIS piece of evidence to show you do know what I’m talking about! Now give me the dirty details.

What’s better than studying to be a detective for years than playing a game as a detective! Imagine getting on cases almost immediately and being able to get hints throughout as you know there is a suspect you can catch. You can look into the mind of the detective as the old saying becomes true that “two minds are better than one”. And, well, you don’t have to actually talk to others and risk asking the wrong questions. This time around, we go back in time to be a private investigator in the year 1924 in San Francisco. 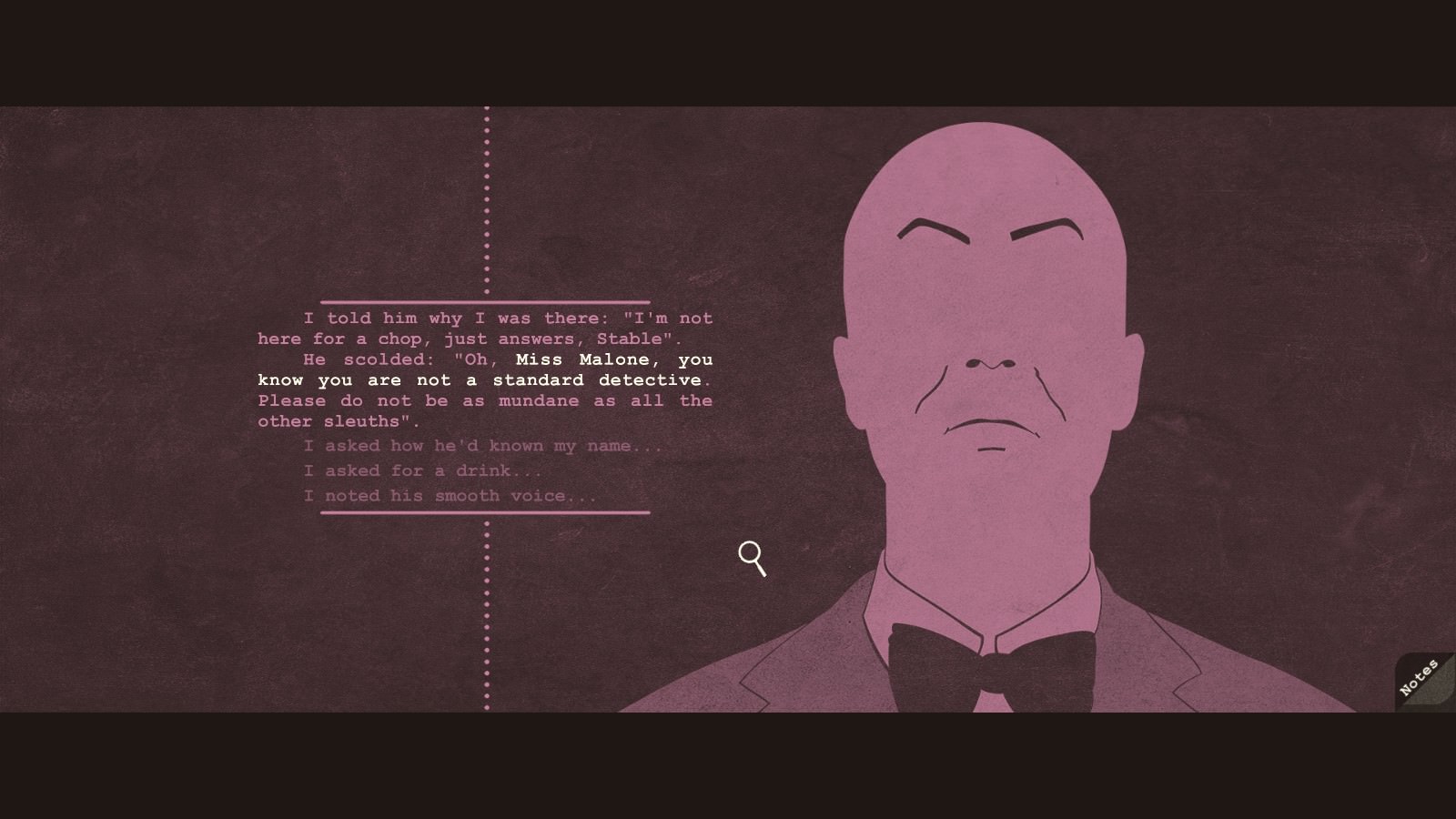 We get into the mind of Malone, a cop turned private investigator, who could definitely use better cases to take up her time. She appears in here wallowing in the memories of what has past and those who have helped her when she first started her career. Luckily for her, she gets a new case that is anything but boring. Mr. Green arrives with a letter detailing a threat against his life due to his recent bootlegging. Throughout the investigation, it turns into something much more than a simple threat. With this case, you have to find the motive, means, and opportunity and prove it through the evidence you find 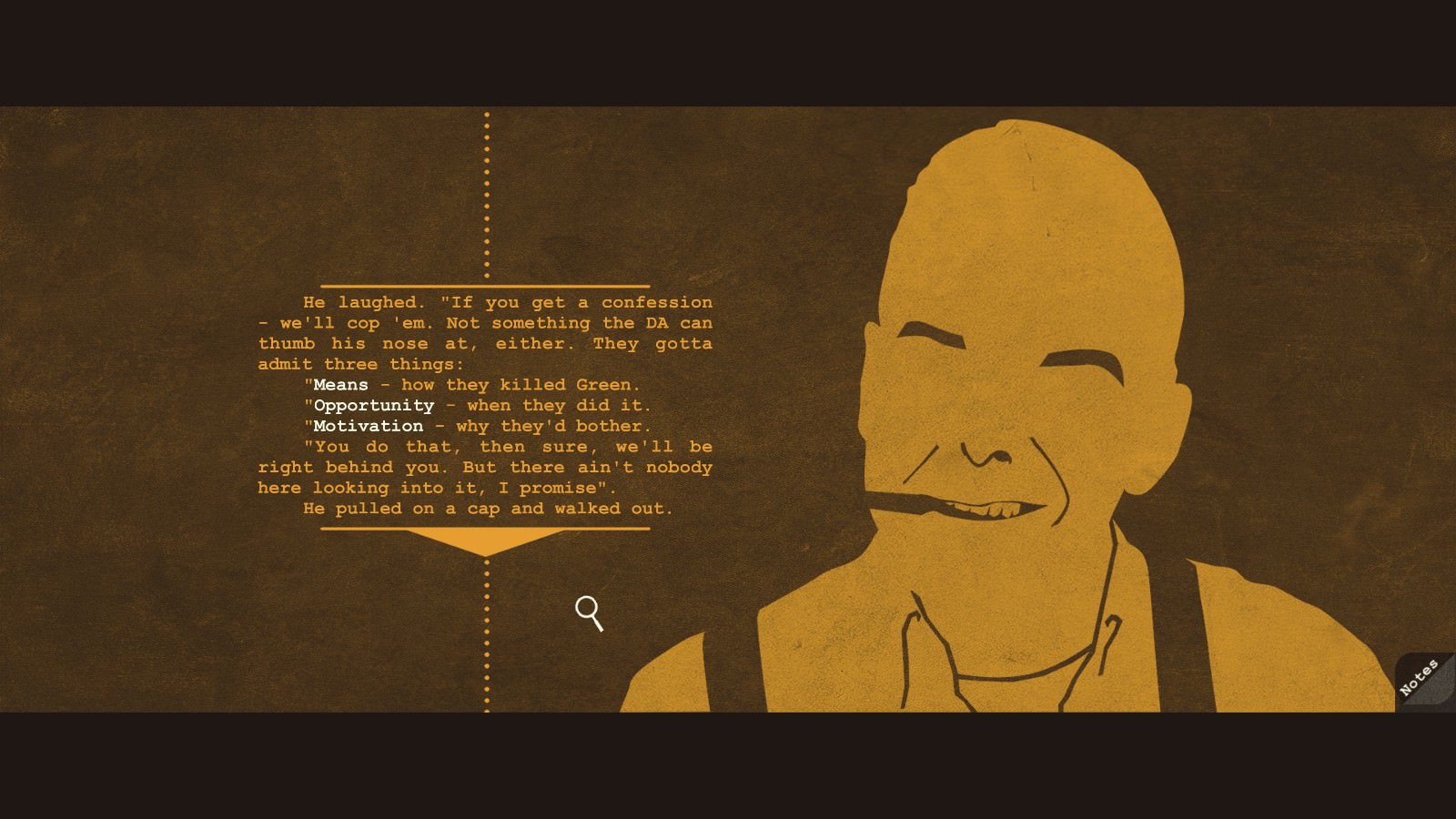 This all centers around gathering evidence, talking to suspects, and -if need be- deciphering statements between one person to the next with the use of a technique called “contradicting”. Each locale has various objects you can inspect along with someone to interview. Malone documents all the important items straight to your trusty notebook for you to review later on. While this is easy to get the hang of, the game does give you a tutorial case that shows just how “contradicting” works and how to link up what is needed to successfully contradict someone. This becomes an integral part of talking to suspects. 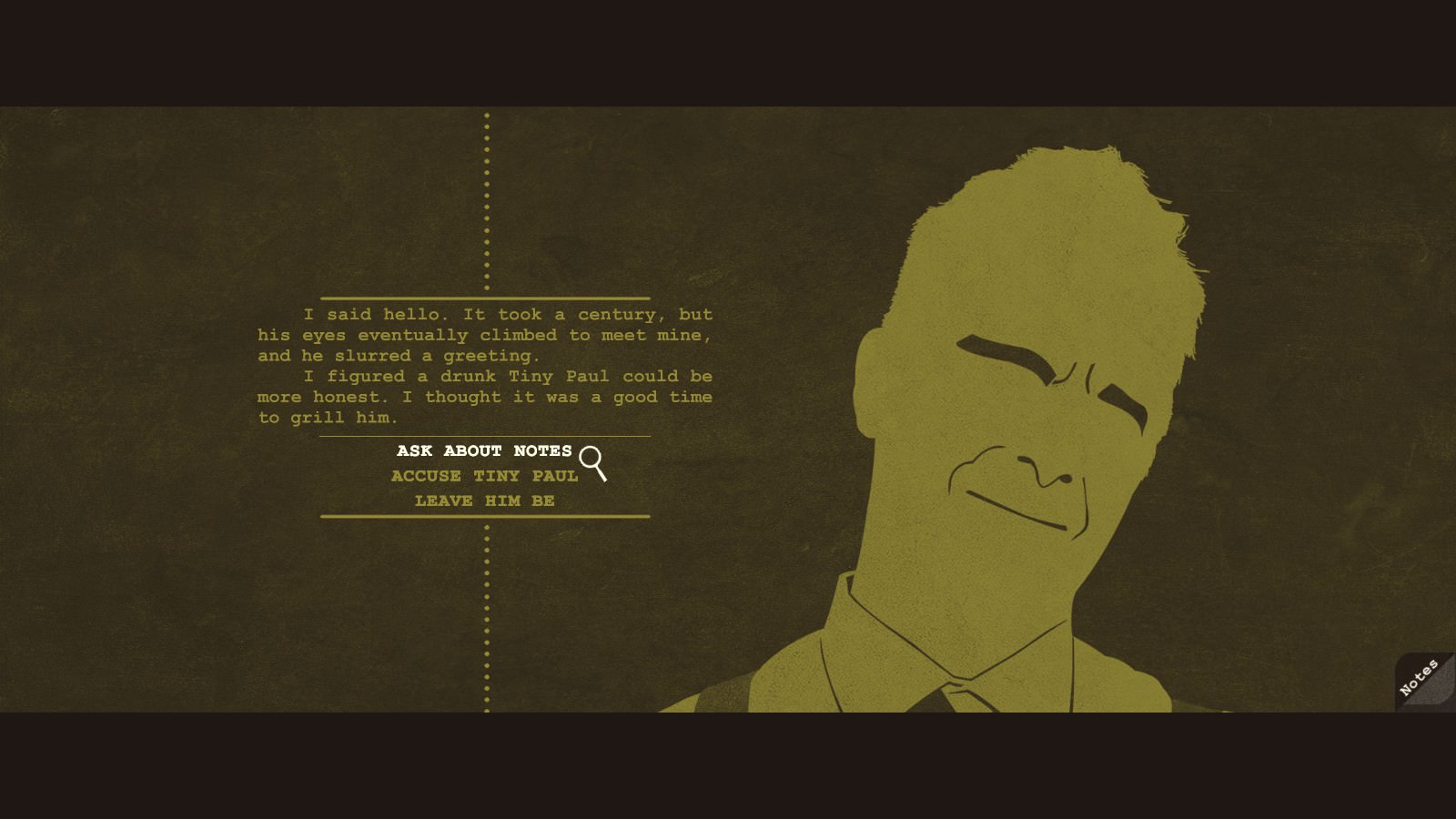 This isn’t exactly a game where you can turn your brain off and still be able to solve the case. A Case of Distrust mostly takes a hands off approach and lets the player work everything out, letting the player not only be in the mind of an investigator but thinking like one as well. What questions will be relevant to this suspect? Can you contradict this statement and is it something you can contradict? Is this suspect telling the truth or trying to pull a fast one? Do you have enough evidence to accuse them and will you be willing to risk them being unhappy with you? (If you were as worried as I was, accidently clicking accuse ____ will have you confirm if you actually wanted to, so there no accidently accusing someone unless you meant to!) There is a hint system in place in the form of a bartender named Frankie, but even then you need to know what evidence to show him and if it is relevant to the case. The best thing you can do is take a breather and think, or talk, your way through the case. Look through all the evidence and statements Malone collected, piece together what you already know and what you need to continue, and pinpoint where everyone was at. See if any of the evidence or statements are connected or what you haven’t asked before that is relevant to a certain person. It might take a while but the “EUREKA!” moment will come. I hit a dead end myself, as I knew something wasn’t adding up but was unsure how can I prove it. After talking the case through with a friend, I figured it out and got a huge lead.

I loved the writing this game provided. Despite only being in this universe for a short time, you get a good feel of the area and the people. Enough information is given to familiarize the player with the various characters while, at the same time, not giving out too much that it is overwhelming. Everyone has their own personality, with their silhouette matching them perfectly.  This makes them unique to one another as you talk to each of them. Malone, herself, has history but you have areas where you can shape how she is. Often times, you will be given at least two options to choose from that will show what Malone focuses on most. Does Malone try to cut a joke when she has a chance? Does she focus on looks or the history she has with someone? 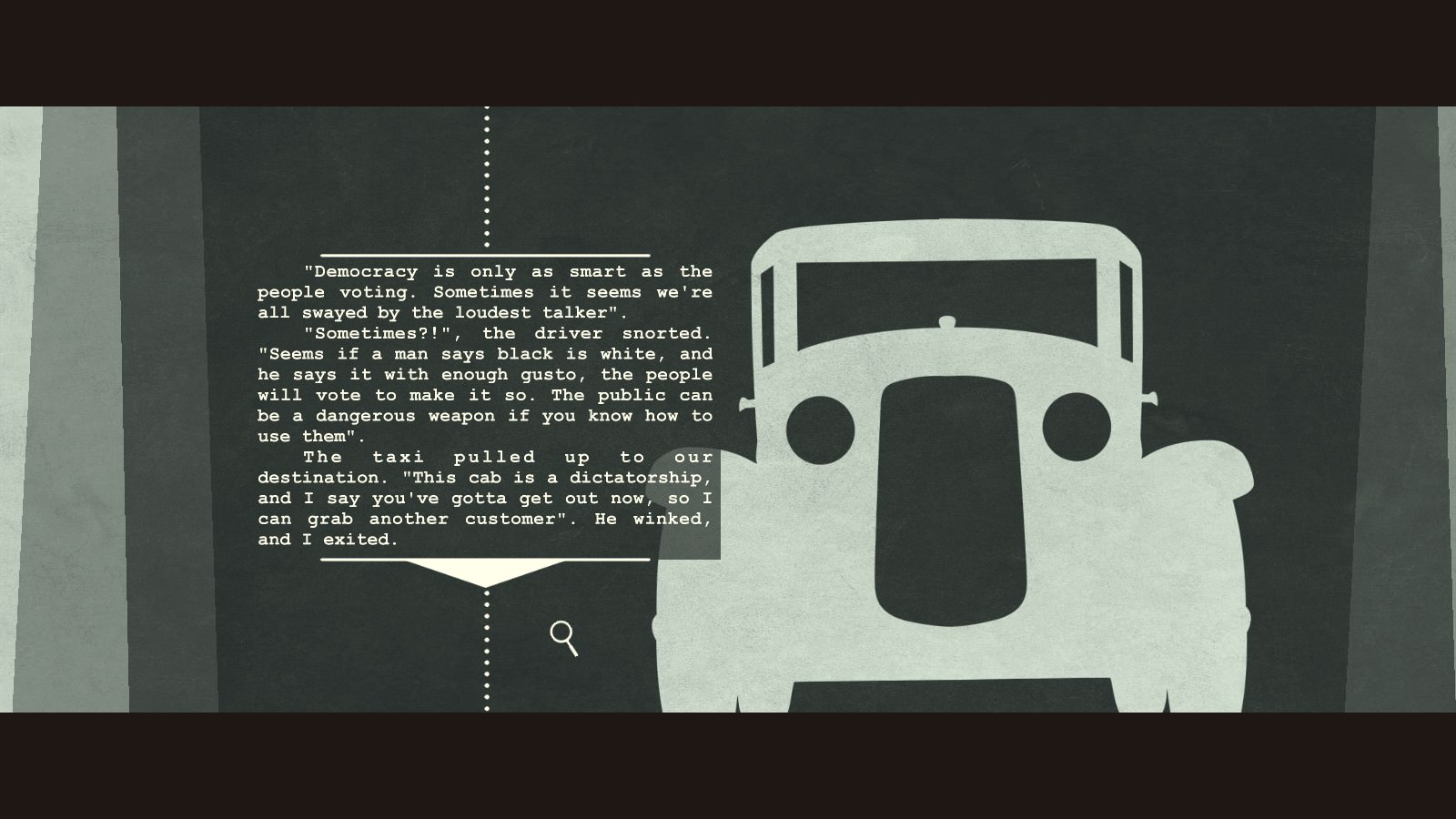 As you travel between areas, you get a small cab transition to break it up. Though this isn’t just a transition, as you will find that you will be able to start a conversation with the driver or choose to sit in silence. What I really adore about this is that this acts as another way to speak to other characters that are not directly involved with the case and get an insight into the other people. Sure, some cab drivers will not be able to hold an interesting conversation, which does make the ability to talk to the cab driver puzzling.  You will eventually be with one that is interesting enough for Malone to mention. These cab drivers bring up a vast amount of topics, none that repeated themselves throughout my playthrough, that you can read or on a rare occasion you can find a newspaper about a recent event. This becomes a nice touch to further show how there are still other people in the background, despite not seeing them. 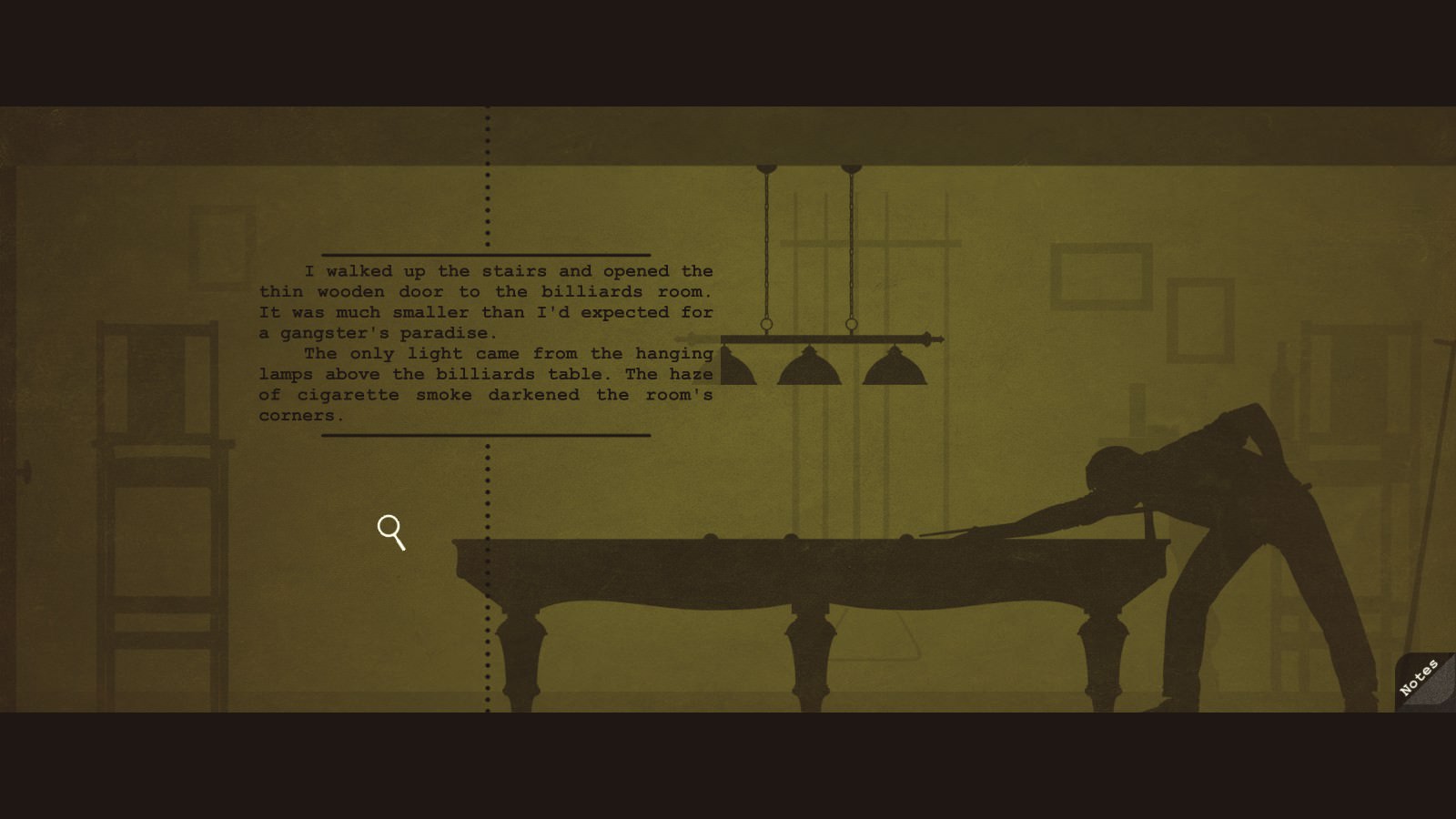 A Case of Distrust uses a minimalistic style based on Saul Bass’ work as each area and person has their own color accompanying them with everything else drawn as silhouettes. This lets the player take in details from the writing they present rather than trying to discern them from the amount of detail added. The people you come across have areas of animation as they switch expressions or act out gestures that are very recognizable. This is all topped with great music, such as jazz, throughout. 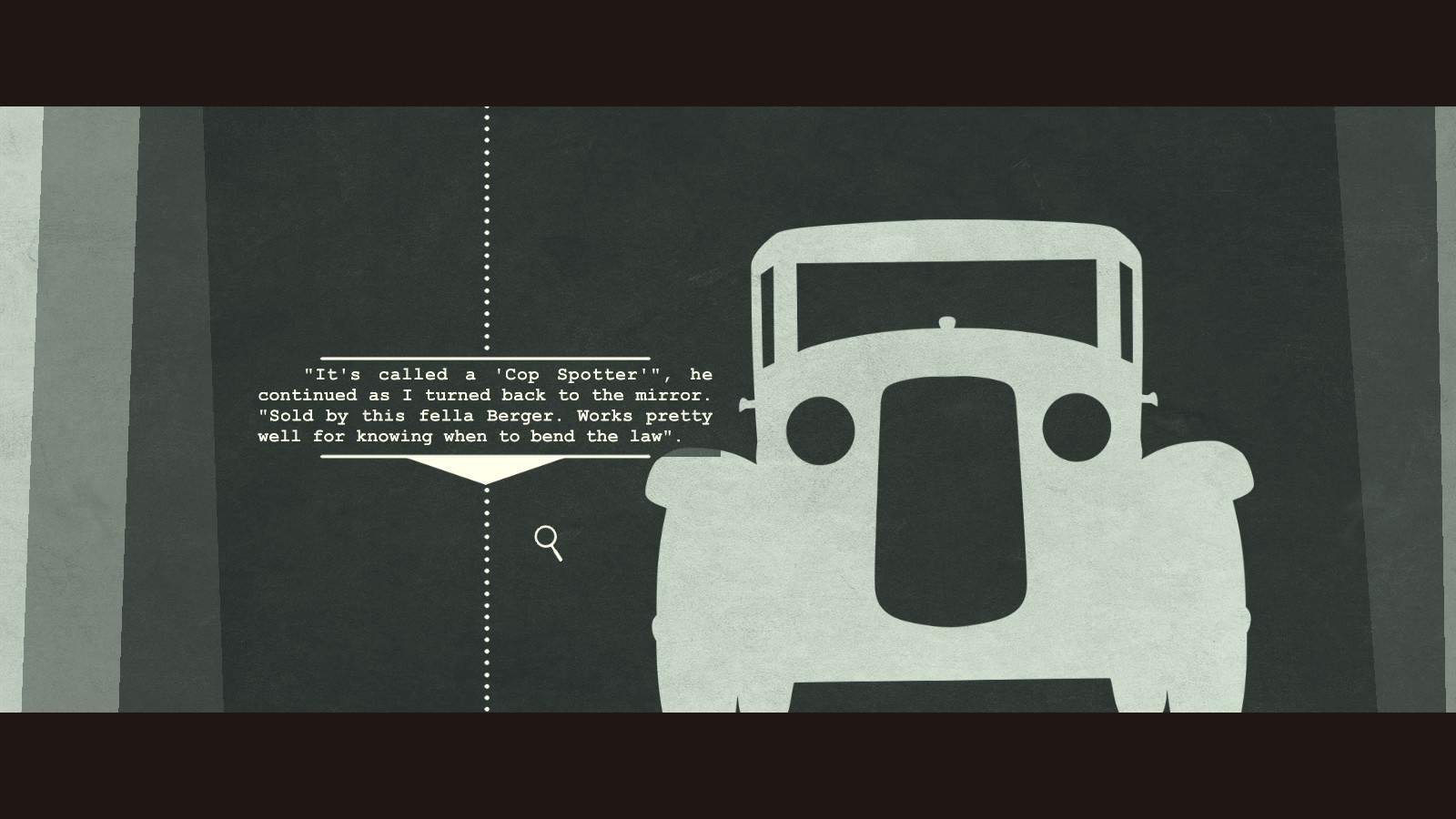 A Case of Distrust ultimately left me wanting more. I wanted to continue being Malone and see what happened, and if she got more cases, after the ending we get (part of it was way too abrupt for me). If you love detective games and don’t mind putting your mind to work, you will certainly like this new addition. Having the patience to think your case through to get out of a dead end will help as well. The one thing I do see being a toss up depending on the type of player someone is, is the hands off approach this provides.  It can teeter between being negatively or positively affecting someone’s playthrough. However, with a lot of elements done right, A Case of Distrust has the ability to grab you and not let go until you solve the case.