Railway Empire wants to be the Railroad Tycoon of this generation. Can it succeed?

As someone with fond memories of Railroad Tycoon 2, and a lot of time spent playing OpenTTD with friends, new titles in this genre are faced with a lot to live up to. After all, why recommend a game that’s simply behind its progenitors? German studio Gaming Minds’ game Railway Empire muddles up the best and worst of the genre for a package that some genre fans will enjoy and others will loathe.

It’s rather pretty, isn’t it?

Offering the commonly used background fare of the early history of railroads in the United States during the 19th century, the game spices it up with a partially educational and partially tongue-in-cheek portrayal of real-world railroad entrepreneurs of the time, wrapped into animated story intros for the five base missions of the campaign. During these levels, there’s voiced banter from the other characters, which does help provide a nostalgic Railroad Tycoon 2 / 3 feeling. Challenge missions and free play make sure there’s enough to do to justify the price.

There are some enjoyable small details in Railroad Empire.  For instance, you can make use of enjoyable on-train camera which lets you lean back and ride along on your network.  Another nice addition is a unique train horn for every type of locomotive, allowing players to blow the train whistle to their heart’s content. 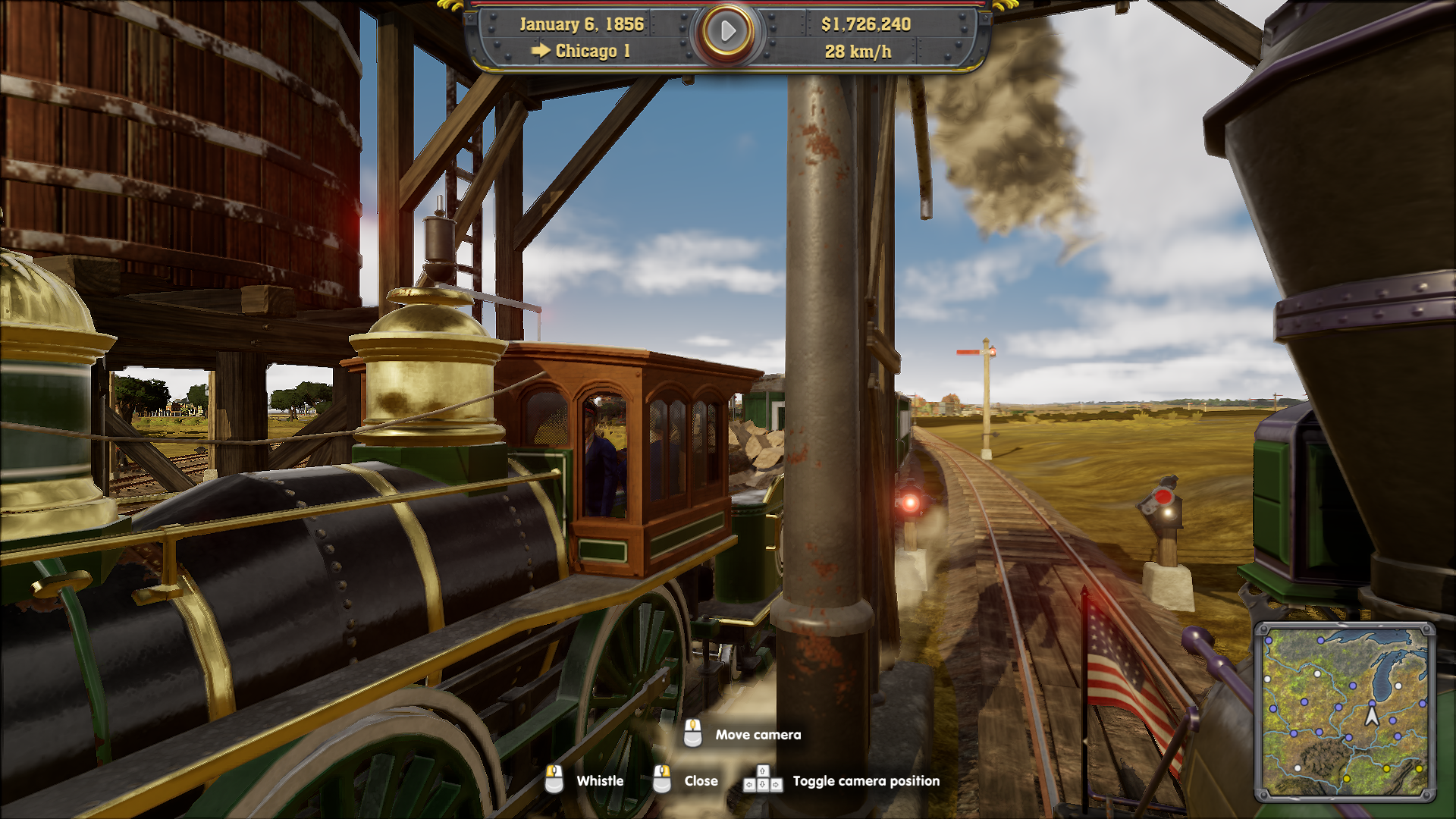 Graphically Railway Empire is pleasant to look at, but the birds, weather effects, and most importantly city inhabitants are merely rendered and animated for decorative purposes. They have no effect on the game, and this becomes painfully obvious when you pause the game and all NPC actors keep going about their daily lives.

The user-friendly in-game help & tutorial system tries its best to simultaneously teach you game concepts as well as keep you informed of what might currently be going wrong in your train network. 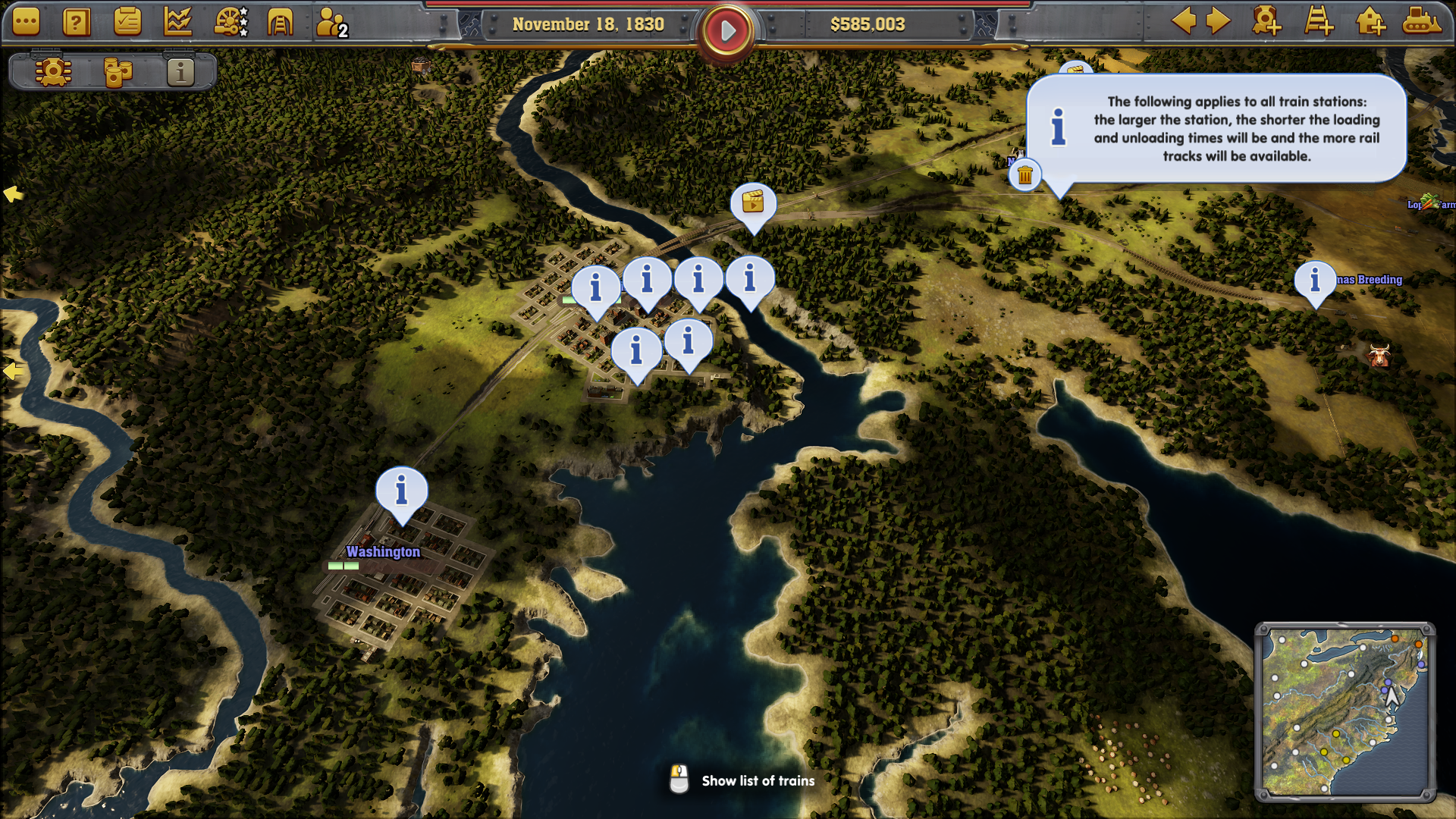 Track building itself is serviceable, featuring the usual free-form rail placement (including height) as well as a signal placing tool. One minor weirdness is that you cannot place the usual scissors/diamond crossovers which are common in other games; here you need two sequential railroad switches to allow trains from either of two parallel tracks to switch to the other. Railways cannot cross each other without merging, which prevents a lot of real track layouts. Using tunnels or elevated rail bridges is very easy though.  That the game remembers the last planned point to point connection even if one navigates away (say to place a train station in a city or check the demand for specific goods) is an amazing improvement to usability; every game with 3D rail-laying needs this, now.

Compared to the competition, what’s immediately nice to see is that passengers seek specific destinations. Gone are the days of Transport Tycoon Deluxe where travellers were happy to go anywhere but home! Unlike passengers and mail, cargo is assigned a destination which accepts it when loaded onto a train. In practice this means a train supplying industries with a route like Cattle Ranch – Omaha – Cheyenne will have part of the cattle designated for Omaha and the other part to Cheyenne. In Omaha, it will offload the appropriate cattle, and try to load wagons of cargo accepted by Cheyenne. From Cheyenne, the locomotive will then drive back to the ranch without any wagons attached, as ranches consume no goods. Express trains generate more money because people are happy to reach their destination faster, which is also pleasing.

The most puzzling part of setting up routes is that, while stations can have up to four platforms, a train will only use the single platform set in its route. Load-balancing multiple trains of the same route involves manually assigning other platforms. This need for micromanagement isn’t helped by the train AI frequently spazzing out when the player edits routes which have active trains on them. The base pathfinding is pretty good, but if two trains are stuck somewhere, manually resolving the situation while retaining your train and cargo usually is not an option. In competing games, you would pause specific trains or ideally send them to depots while you perform emergency surgery on the tracks, but neither exists in this game. Bizarrely, there’s even a game option that rewards you with a score multiplier at the end in return for you being entirely unable to pause the game for construction. On the other hand, the setting to enable free pausing at any time hurts your end-game score based on how long you use the feature.

The weird, the bad and the AI

A few things which were quite fun in older train line sims were simplified away. When you buy up an opponent, their rail lines and trains are forcefully sold. In Railroad Tycoon, it was conceptually fun to be able to buy up the AI’s actual operations and combine their lines with yours, akin to a real corporate takeover. Can’t do that here – for exactly why, you can read a few paragraphs below.

On the other hand, some things rarely – if ever – seen in this genre are that the weight of a train and the track incline affects how much water and lubricant will be needed on the route, and thus how frequently it needs a water stop.

In contrast with this apparent realism, train running/maintenance costs don’t factor into the balance all that much, and there is no upkeep cost whatsoever for all your ginormous cross-country infrastructure, so the fact that water and lubricant are even a feature is the first of many examples of horrendously inconsistent game design. 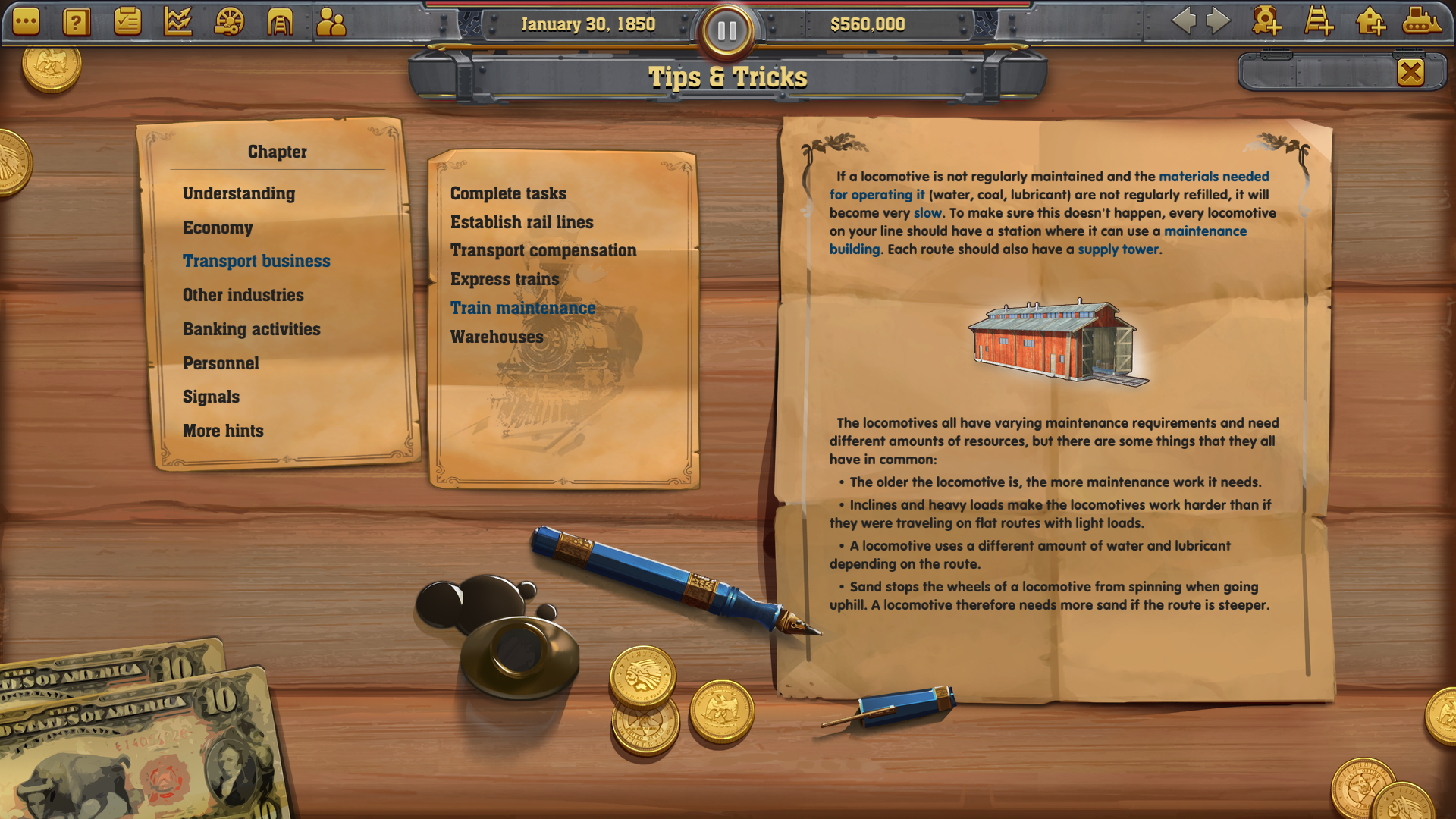 Trains and your company headquarters can be equipped with special personnel, somewhat akin to hiring leaders in space strategy games. For certain recurring costs, they provide you bonuses like fewer engine breakdowns, increased profits for mail transport, or a higher top speed. As an additional micromanagement layer, your employees have different personalities which can clash with one another, so you want to make sure the different roles on the train, up to four of them, are distributed to individuals that mesh well. Unlike in reality, there are high up-front costs for hiring these employees, and they receive rather pitiful wages considering the strength of their bonuses. A special headhunter allows you to rob an AI company of one of their prized human resources, but the costs for that are equivalent to hiring dozens of other fresh conductors. It’s just one of many game systems which are balanced quite questionably.

Like in the studio’s previous Patrician / Port Royale series titles, there is a mechanic to buy/sell goods with fluctuating values, in this case abstract stocks. It’s baffling why this is included, as transportation companies aren’t known for being investment bankers hoarding shares in “industrial goods” – they transport others’ property which they at no stage pay for or own. The UI for it appears tacked on and does not even keep track of when you would be making a profit/loss – so you need to grab your trusty notepad(.exe) and write down how much you paid for your shares, assuming you intend to make use of this feature. To make matters worse, the stocks seem to just go up and down randomly (and somewhat wildly), entirely disconnected from the game world. It feels like the gambling feature often found in adventure games, implemented just because a developer wanted to use a random number generator function somewhere.

As the player, you can pick a special easy realism grade which lets you stop bothering with actual track layouts and signalling, and your trains just pass through one another like spectral choo-choos. Unfortunately, the AI for your competitors is so limited that the developers have put it in this mode permanently, meaning that AI trains will never use signals or reasonable routes. As the AI engages in all matters of rampant cheating like that, it ultimately joins the fake townsfolk as decoration. With the ability to sabotage your operations, block your routes with their own expansion, load up the goods you were planning to transport, and with you being able to invest in AI companies, they’re admittedly still more interactive than your average potted plant, but the difference isn’t as big as you’d think. There’s no tycoon game where an AI which plays by different rules has ever felt fair or fun.

With Steam Trading Cards, Achievements and Workshop support, plus of course Cloud saves, Railway Empire checks all the boxes. Achievement hunters will be occupied for dozens of hours, while Workshop scenarios offer to expand the available content as well as correct some nuisances like not being able to unlock technology from outside your scenario’s time period, even in free play.

Gaming Minds reacted swiftly to common player complaints by announcing future updates including a mammoth-sized USA map with all the game’s technology available, greatly expanding the scope a single game of Railway Empire can have. How much they can salvage in terms of design idiosyncrasies and the AI remains to be seen.

For genre veterans, Railway Empire is a tycoon game with training wheels, confused game design choices and unnecessary half-features. You don’t get any of the sandboxy freedom players are used to, and all there is in compensation is some reasonably nice presentation, meaning the slightly historical campaign mode and lush graphics. The game has quite a lot of content, but it’s neither implemented nor connected well.  This is especially true for those looking for a challenging business sim, it honestly won’t be found here.

A less demanding casual gamer audience would only be slightly deterred by minor bugs and some track placement difficulties, certainly not enough to deter one from sinking loads of time into the campaign, scenarios, or free play.