Usurper is already a pretty compelling metroidvania, even if it’s in Early Access. Aside from a few missing features and the usual things that you’d expect from a title in development, this game shows great promise.

It’s quite difficult to not think about Castlevania whenever you see Usurper, at least that’s how I feel after playing it for a few hours. Even though there’s no mention on the Steam store page of what inspired the developers to create this game, I think that it’s pretty fair to say that it was clearly inspired by the old Castlevania games, gothic architecture, and it even has a little bit of Dark Souls thrown into the mix.

While Usurper is the sequel to Shrouded in Sanity, the developer’s previous game, you don’t need to play that one first before diving into this one. As a matter of fact, when I first played the game I actually had no idea that this was the case, so I can certainly say that I’m not really lost in terms of story, even if it can feel somewhat vague at times. The game puts you on the shoes of Saragat, a knight of the Angelic Empire of Brittania, around the year 1898, after he finds himself bound by the will of an otherworldly creature to help him overthrown the Navigator, the one in charge of the Citadel. This Citadel is where the game takes place, a colossal structure that crashed on the city of London, and the game sure goes to great lengths to show how big it is. 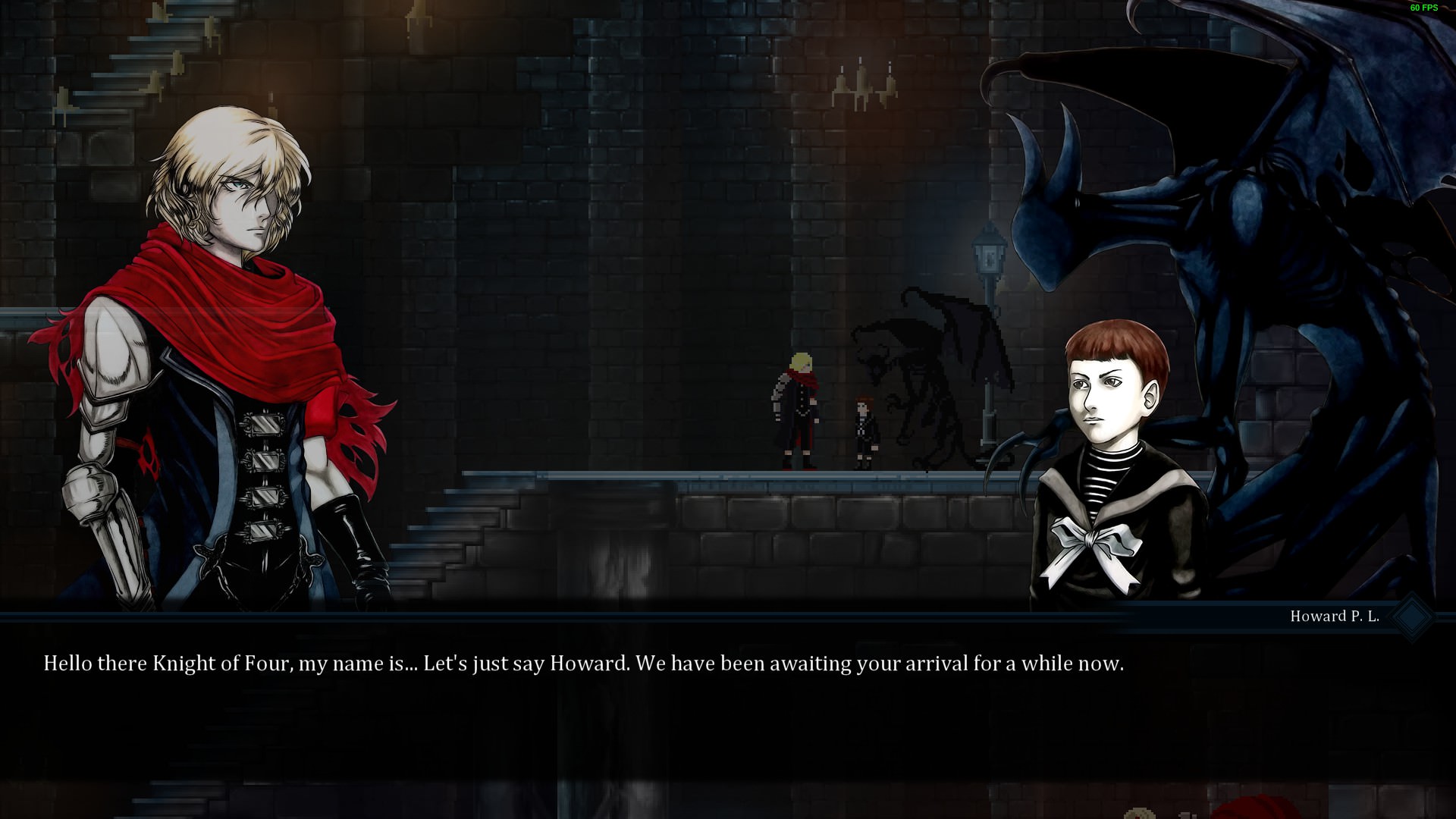 The game is a metroidvania at its heart, it features a wide range of weapons, a highly interconnected world, and items and abilities that will grant you access to previously inaccessible areas. The game also gives you this constant sense of progression as you acquire new gear and become increasingly more powerful, which can clearly be seen as you start to mow down enemies, and even bosses, that you had trouble dealing with in the past.

The progression in Usurper actually works in the same way used in Dark Souls and other games in that genre. As the player slays enemies, opens containers and whatnot, you’ll acquire Vitae, the game’s main form of currency. This currency can then be used to level up your character, thus increasing one of several stats at your choosing, such as strength, dexterity, constitution and so on, the kind of stuff that you’d expect to be present on an RPG. However, when you die, you’ll lose your Vitae, but it will remain in the place where you died. This makes it so that you have a chance of recovering what you lost, even if you have to go through pretty much everything that you went through on your previous run, because enemies respawn every time you trigger a checkpoint. 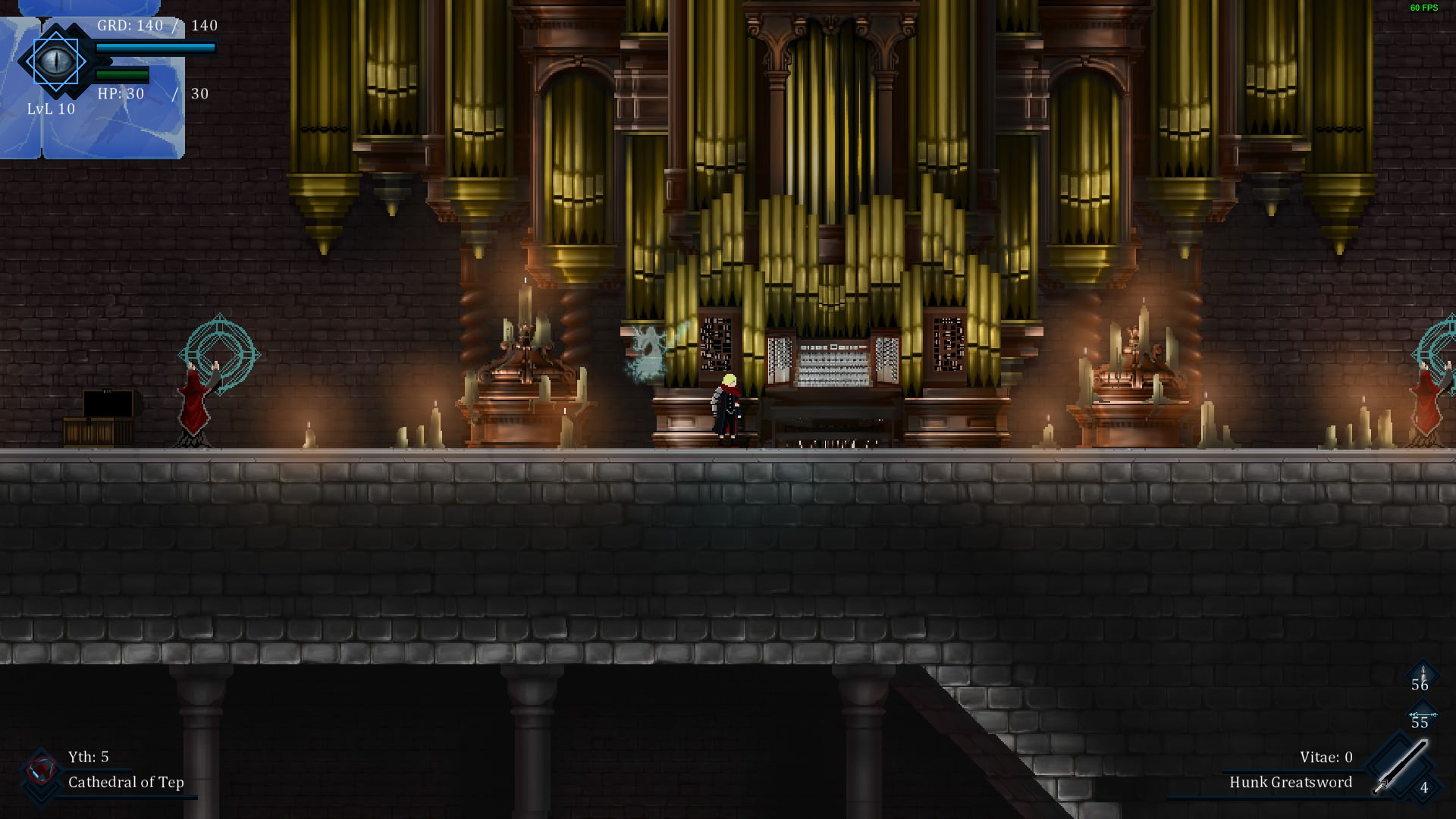 The way the world is laid out, with several different areas that are interconnected, works really well with the way that you progressively unlock new items, either by exploring or by killing certain bosses. Still, most areas are still connected to this center hub-like zone, where there are a few NPCs that you can talk to, but most of them still don’t have their main features implemented in the current build. In terms of level design, I don’t think that it’s one of the game’s strongest features, but the environments sure are nice and fitting. The game’s ambiance gives this very strong feeling of a mixture of Castlevania and Dark Souls, with a surprisingly striking orchestral soundtrack that fits the game’s ominous, grim, and dark world perfectly.

Now, the biggest thing about Usurper and the only real thing that will probably keep people going forward is the combat. The game’s combat system relies both on health points and guard values. The former is pretty much what you’d expect, once it reaches 0 you’re dead, but the only way to recover your health is by sitting on one of the various thrones that you can find in the game, where you can also save your progress. On the other hand, guard serves both as your stamina, as well as an auto-evade of sorts. The guard value can go down to -100 if you spam your attacks, but any guard points that you have above 0 will allow you to block incoming damage, even if you only have 1 health point left. This allows for some interesting encounters to take place, and it took me a while to get used to the idea that, even though I was, theoretically, one hit away from dying, I could actually take more hits than that, if I played my cards right. 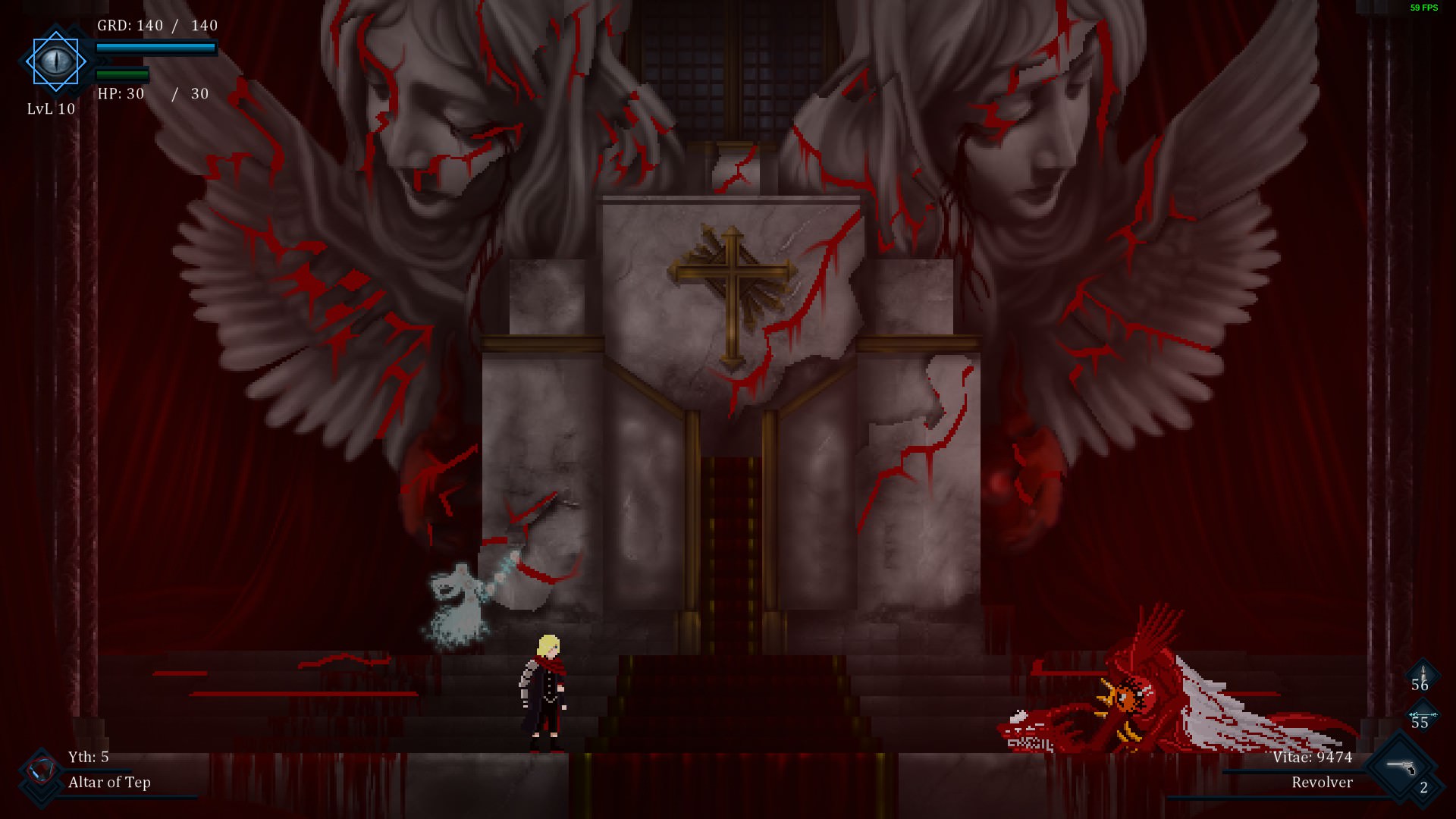 The player is also rewarded for not going straight into combat and slashing as fast as he can, as once per life you’re able to dodge any final blow that might kill you. Nonetheless, if the player takes enough amounts of damage that surpass the player’s guard value, the additional damage will be taken to the player’s health bar. In the end, this makes it so that you can’t really let yourself feel too comfortable whenever you encounter an enemy type whose strength you’re unaware of, even if you’re at full health and have some guard left, as you can pretty much get killed in one hit.

With that in mind, enemies are somewhat passive and tend to have predictable actions, so it’s not really a game that presents that much of a challenge once you learn your way around each enemy type. The bosses are quite challenging though, thanks to a varied range of attacks and transformations that require you to have quick reflexes, and they’re clearly one of the game’s strongest points. 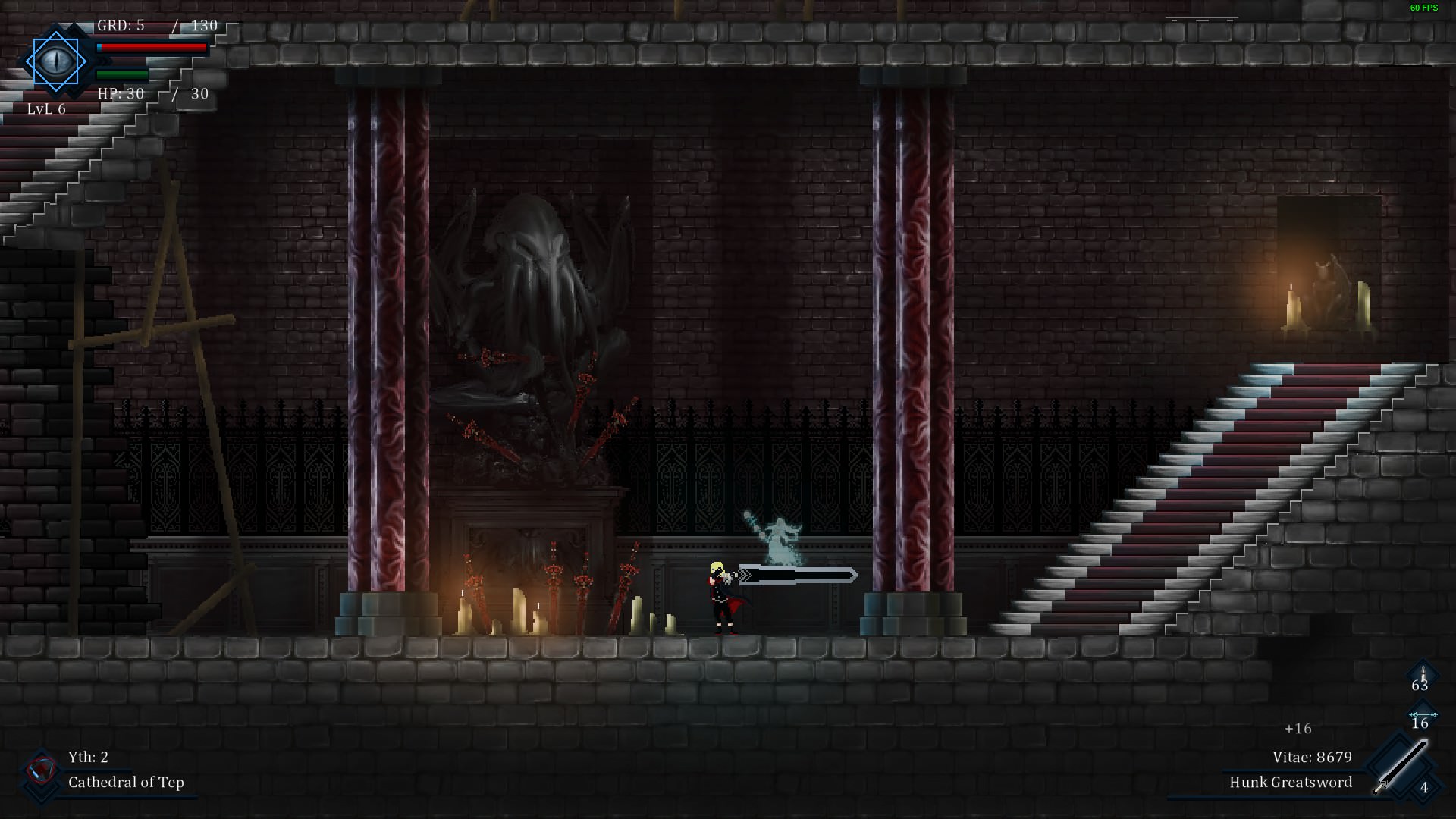 When you consider that this is has been in Early Access for a couple of months now, I’d say that it’s in a pretty good shape and it’s on a good way to become a great metroidvania. Still, the game still has its fair share of problems. In terms of interface and menus, the game still looks and feel rough in these aspects. There’s also no way to directly compare two weapons, which makes the task of choosing to use between the many weapons that you’ll come across more bothersome than it really should be. As far as crashes go, the game has only crashed on me one time, just when I entered a new area, and obviously it didn’t save my progress, so I had to do everything again, ever since my last checkpoint. Lastly, my final gripe with the game is that sometimes it’s hard to distinguish if the limits of the walls are part of the background or the foreground without running up against them.

I must admit that, while at first, the game wasn’t really grabbing me.  However, the more I played, the more it grew on me. I’d say that it is impossible to say that this isn’t a game that’s the result of a deep passion for the occult, the eldritch, as well as the games that I’ve already mentioned previously. Nonetheless, the game still has to mature a fair bit in my opinion, even though I haven’t run into many crashes or bugs, as there are plenty of missing features. With that said, if you’re either into the otherworldly and the whole gothic scenery of something like Castlevania, and if the idea of a metroidvania that takes place in this sort of setting appeals to you, I’d say that you can’t really go wrong with Usurper, but you might want to wait for the final release.