PREVIEW: Next Up Hero Beta

Next Up Hero is an upcoming low-violence twin-stick shooter with a gimmick: Community Continue. When your character dies on a level, the next person playing can resurrect him or her, and end up with a small army of ghostlike heroes.

Next Up Hero is a cartoonish twin-stick shooter with rogue-like elements from Digital Continue, published by Aspyr.

In each game of Next Up Hero you take control of one of nine legendary heroes fighting to protect the Spoken World against the Ceaseless Dirge, an endless horde of mechanical and organic monster-like enemies who seem to have nothing better to do than stand about while they wait for you to dispatch them.

The game has a confusing backstory involving something called the Spiral Shards, into which two young people with the ability to summon dead heroes (echoes) using song venture, as they take on the Dirge.

The game is presented in an isometric view, with bright and colourful cartoon-like graphics representing the characters and enemies and some nice effects for weapons and abilities. The levels themselves become very repetitive very quickly, with a small number of tile sets in use. The tiles are well drawn and fit together well, but every level looks basically the same, in one of a few different colours. 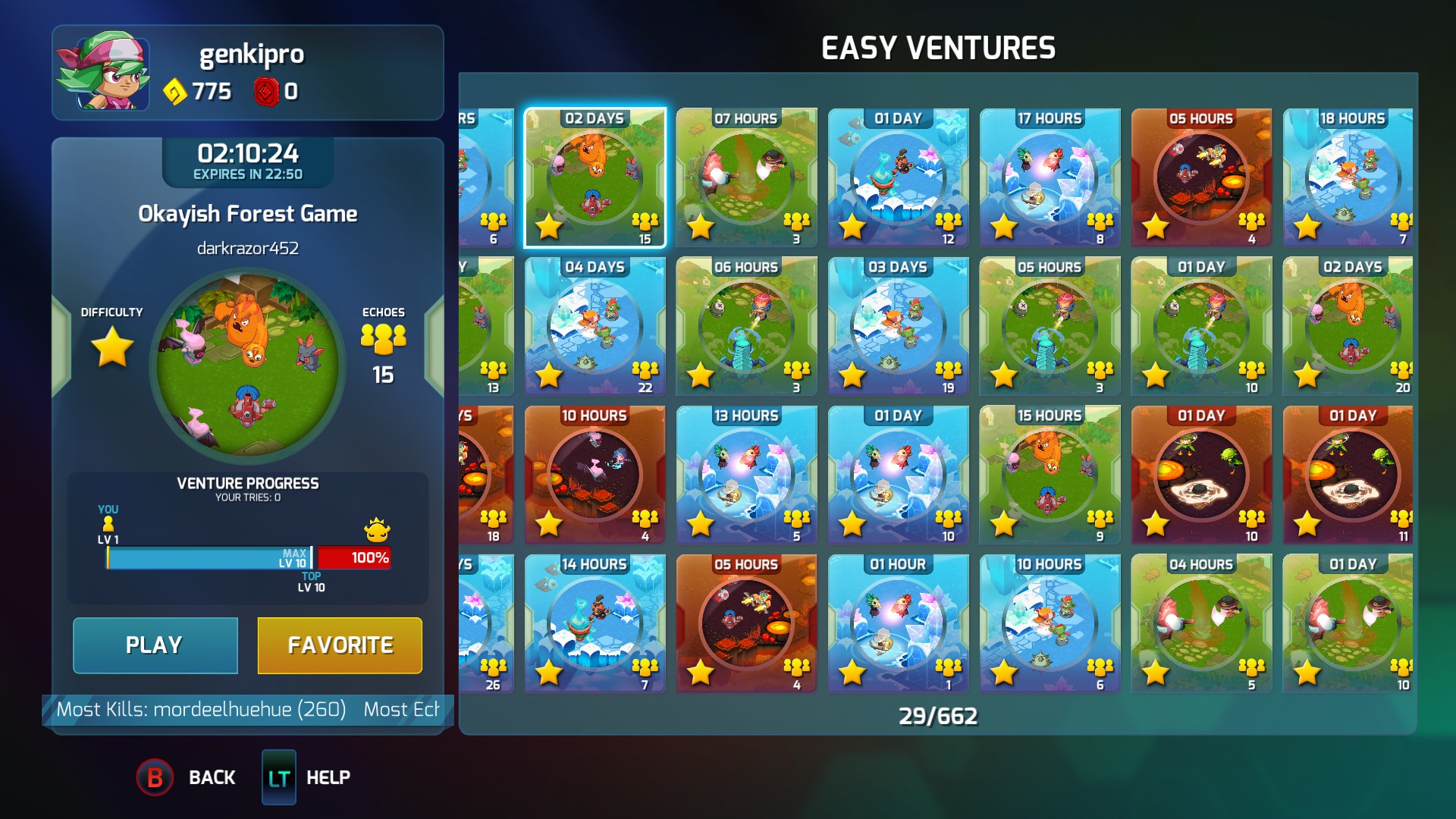 The introduction is presented in a hand-drawn cut scene with some basic animations and full voiceovers, which match the subtitles. It looks quite nice, though the story itself is a bit weird. The interface graphics are large and quite colourful, with key or controller button icons displayed in appropriate places to indicate how to move around. These mostly look good, though I can’t say I’m a fan of the three horizontal slashes to represent the Start button; whatever happened to the universal ‘play’ symbol?

Menus seem a bit confusing when you first start out. Once you’ve unlocked the basic gameplay and you can see the venture selection screens it makes more sense, but I did feel bewildered at the beginning, and the interface didn’t help. And why on Earth is there no way to see or change the controller options mid game!? 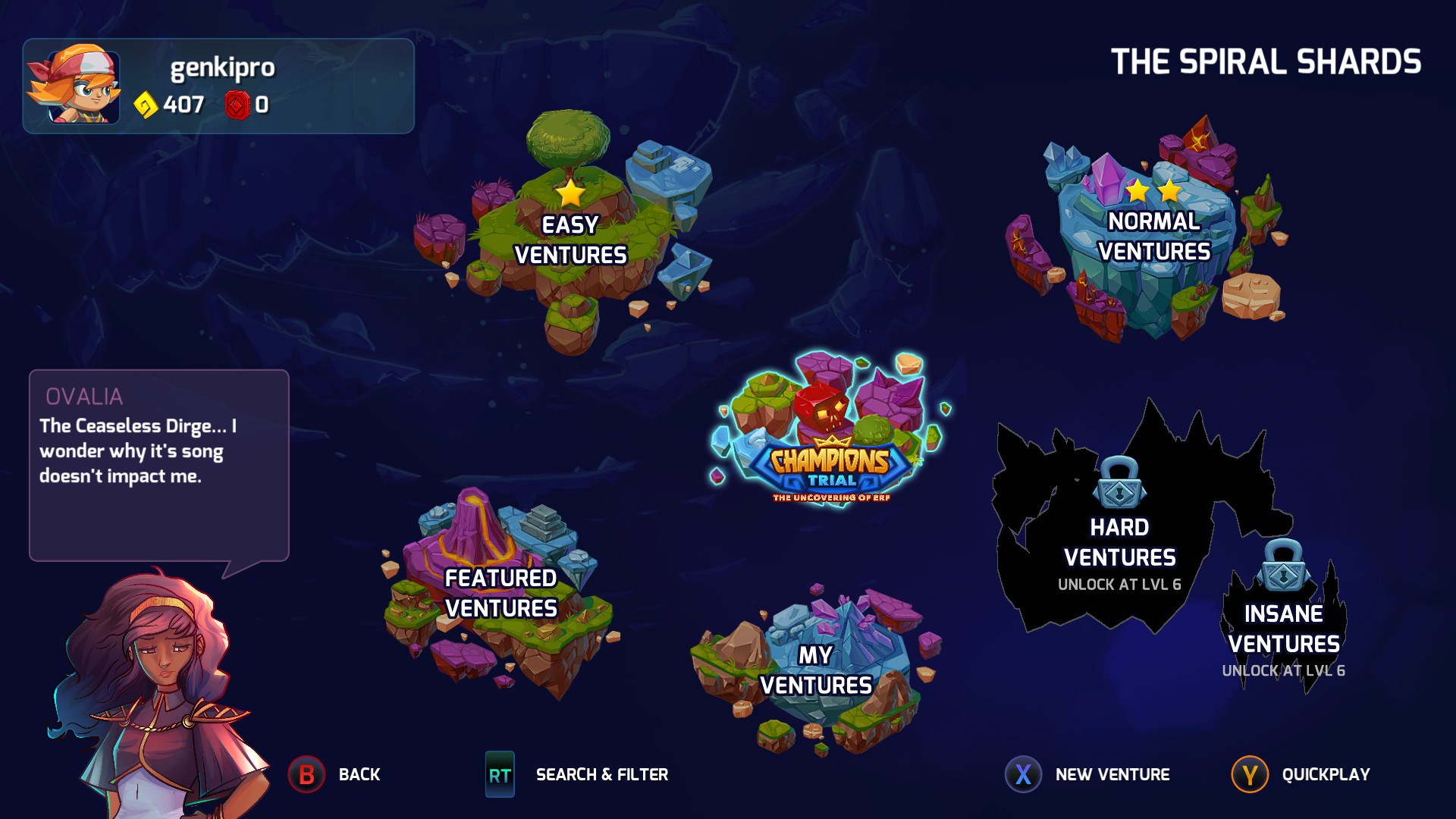 Voices are good in the introductory cut scene and scattered throughout the game, though the in-game dialogue could use more variation. Sound effects are fun and fit the theme well, though some are a bit annoying; the menu interaction sounds in particular are way too loud compared to the rest. Music reminds me of late ’80s platformer music, but maybe that’s just me. It seemed pretty heavy on the drum machine and synth sounds. It’s sort-of catchy, but I wouldn’t buy the soundtrack.

There are no graphics quality or performance options and I found scrolling of levels, especially when panning the view (using the right stick) to be chunky enough to be distracting at times. I also saw a couple of grammatical errors. 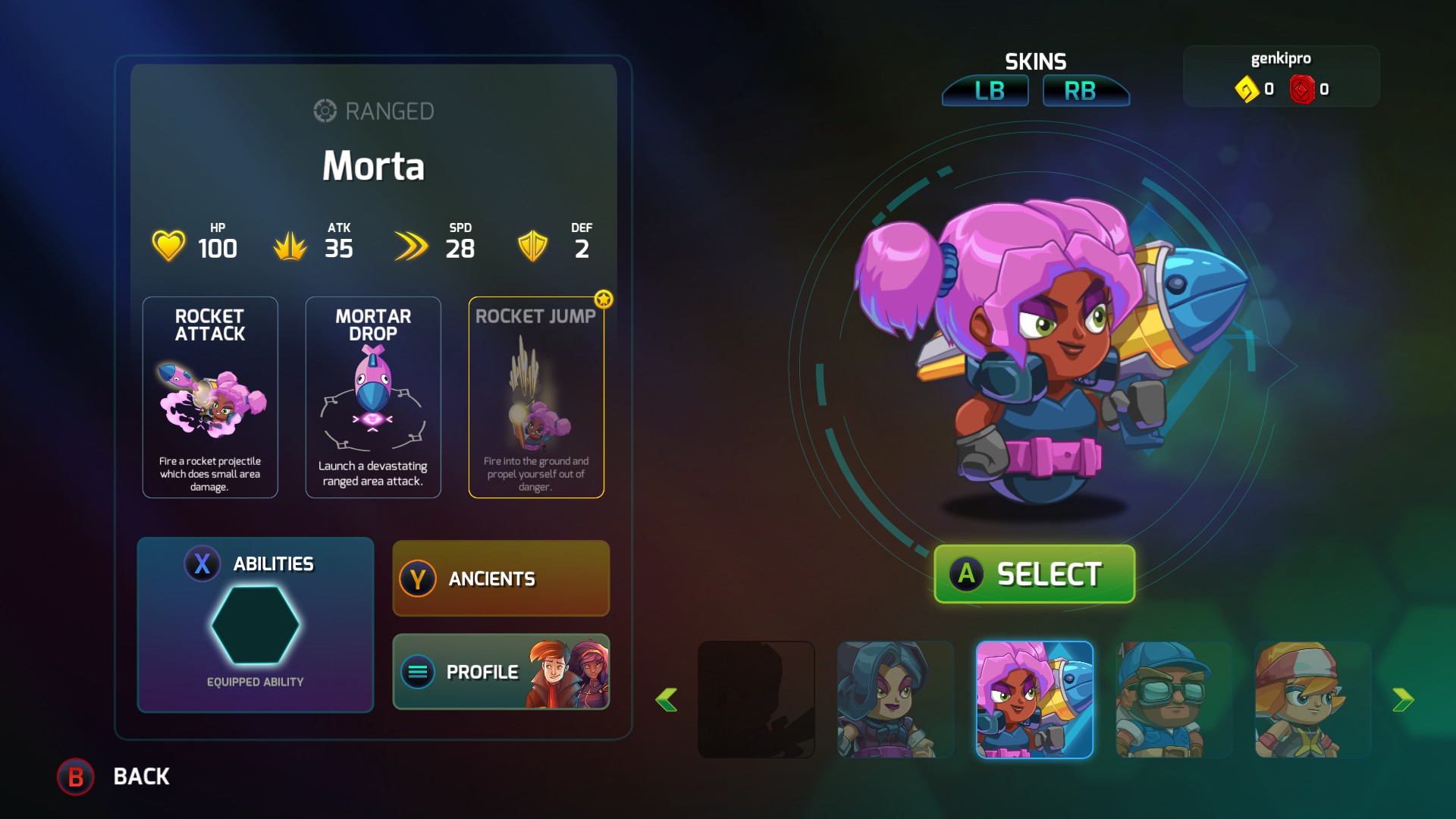 Next Up Hero has all of the typical twin-stick features: movement with the left hand, aiming with the right, primary and secondary attacks, procedural levels, permadeath, and so on, but when you compare it to other games in the genre, it seems as though there’s not much going on most of the time.

Each venture is broken up into a number of levels with a boss at the end. Each level is procedurally generated and typically has many of the same monsters you’ve seen on every other level; there isn’t a huge range, especially when you consider that some are reskins. If you die then it’s back to the menu. 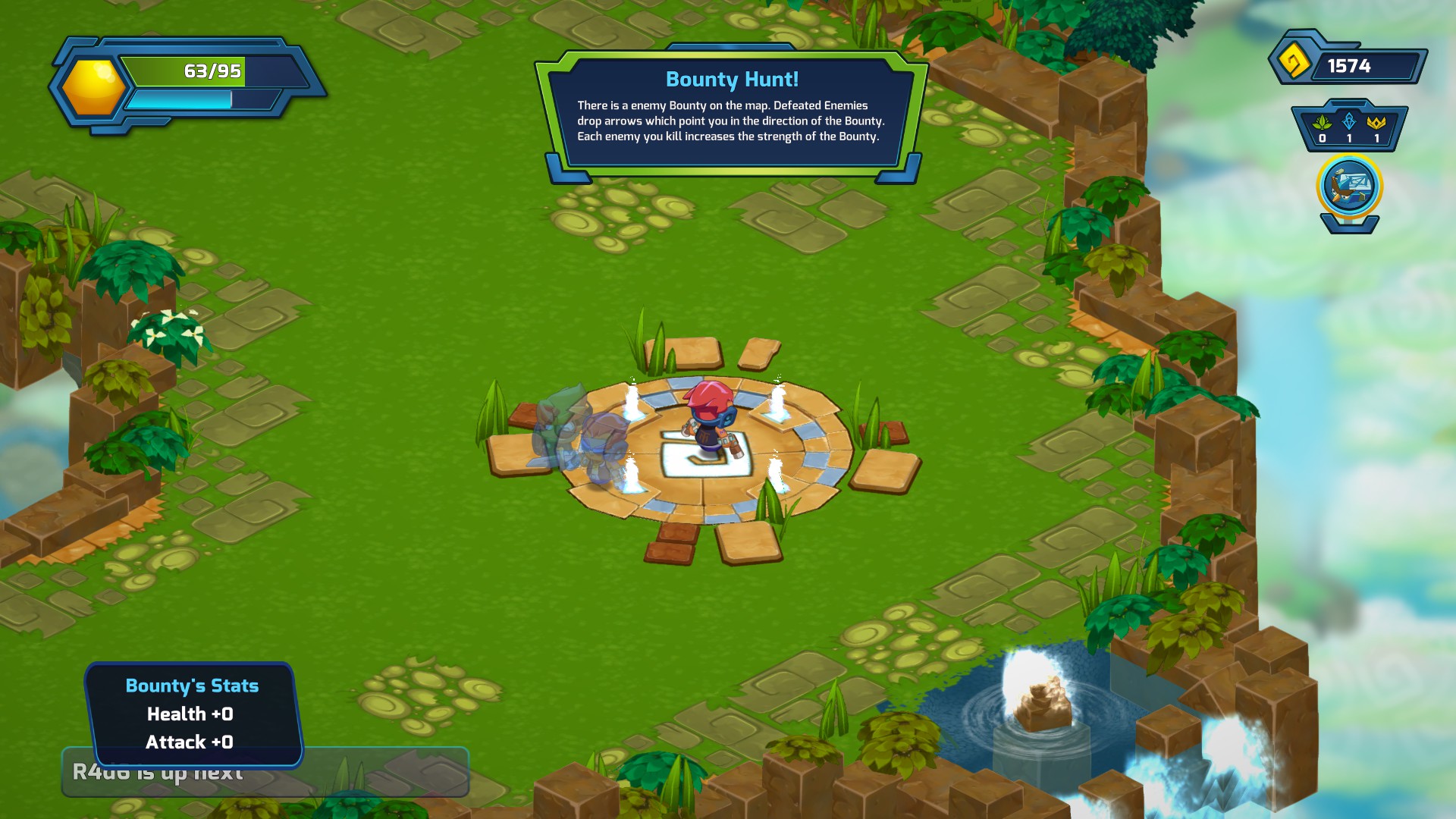 And this is where Next Up Hero‘s cool gimmick comes in. Every time anybody plays a venture and dies, the game remembers and adds that hero to the list of echoes there. The next time you play that venture you start from the level on which the previous player died, and you may find that player’s echo, which you can resurrect. It then follows you around, beating on enemies and generally making the level easier for you. You can also use resurrected heroes to form ‘ancients’, which are more powerful, but temporary, special abilities: a reflective shield, a golem-like thing to fight for you, an air strike, and so on. So even though your own character might not be any more powerful, with echoes around you’ll find it easier to progress the next time you play. 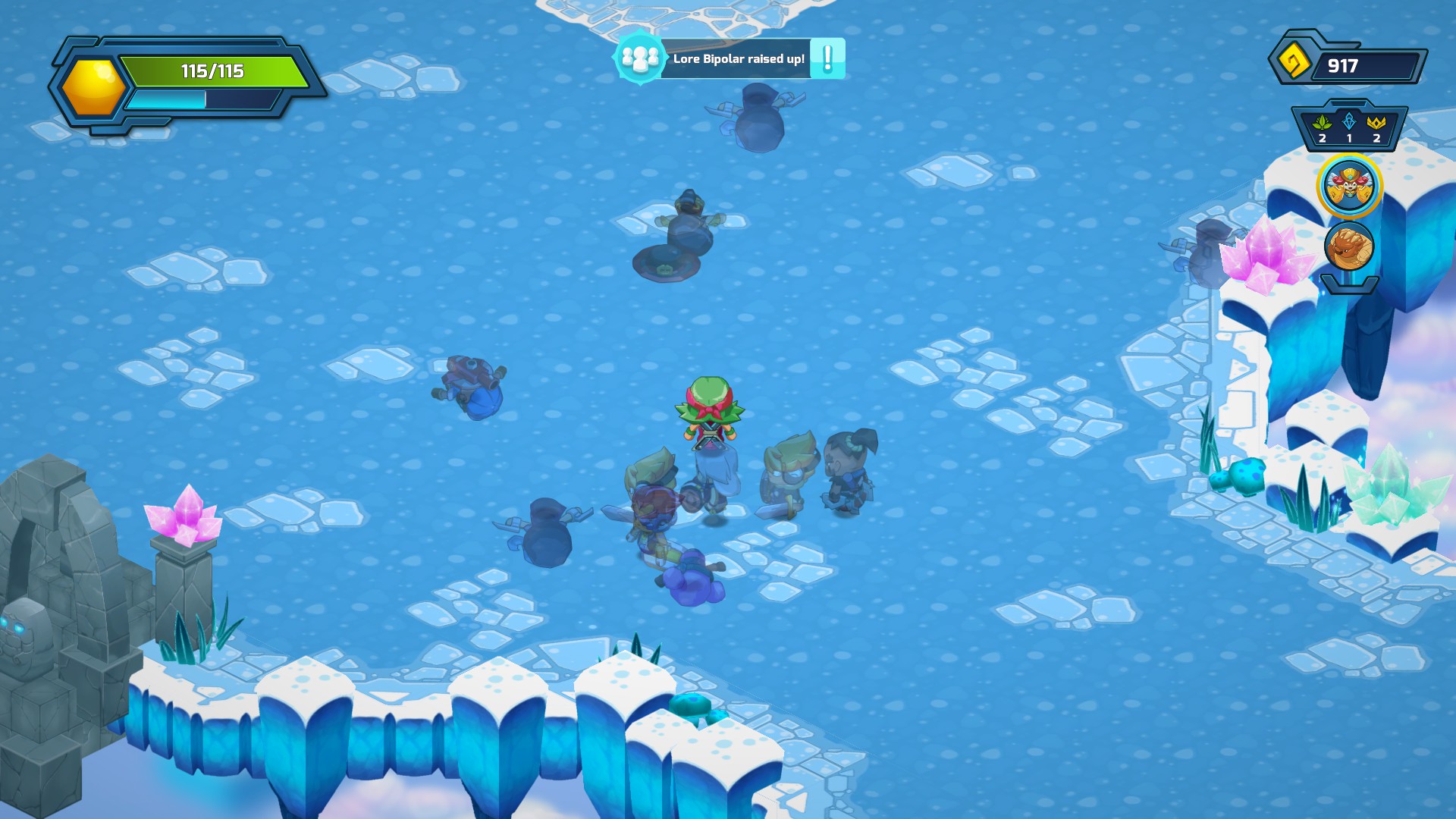 The game is designed to be played online, with new ventures being created by other players all the time. The venture browser allows you to pick a venture based on difficulty, number of levels, echoes, and other basic parameters. Digital Continue also have some created ventures that are featured, including speed runs and the Champions Trial, a feature that I haven’t yet unlocked. There is direct co-op multiplayer of a sort, too. If you find someone playing a venture then you can spectate and choose to either help or heal the hero. Helping allows you to take control of an echo, while healing simply refreshes the hero’s health bar. It seems a bit unreliable, but it’s a good start, which I hope will be extended during Early Access.

Character progression is a bit naff. You earn tokens and prestige points as you kill enemies and find chests. Tokens allow you to unlock abilities based on the type of enemy tokens you collect, such as a chance to summon a mirror image or to stun an enemy, but you can only have one equipped at any one time, so you can’t power up too much. Prestige points can be used to unlock locked heroes, as long as you’ve reached the required level. In my opinion some heroes are simply better than others, though, so I think a bit of balancing is needed. Oh, you can also unlock extra skins and an extra ability for each character. Yay. 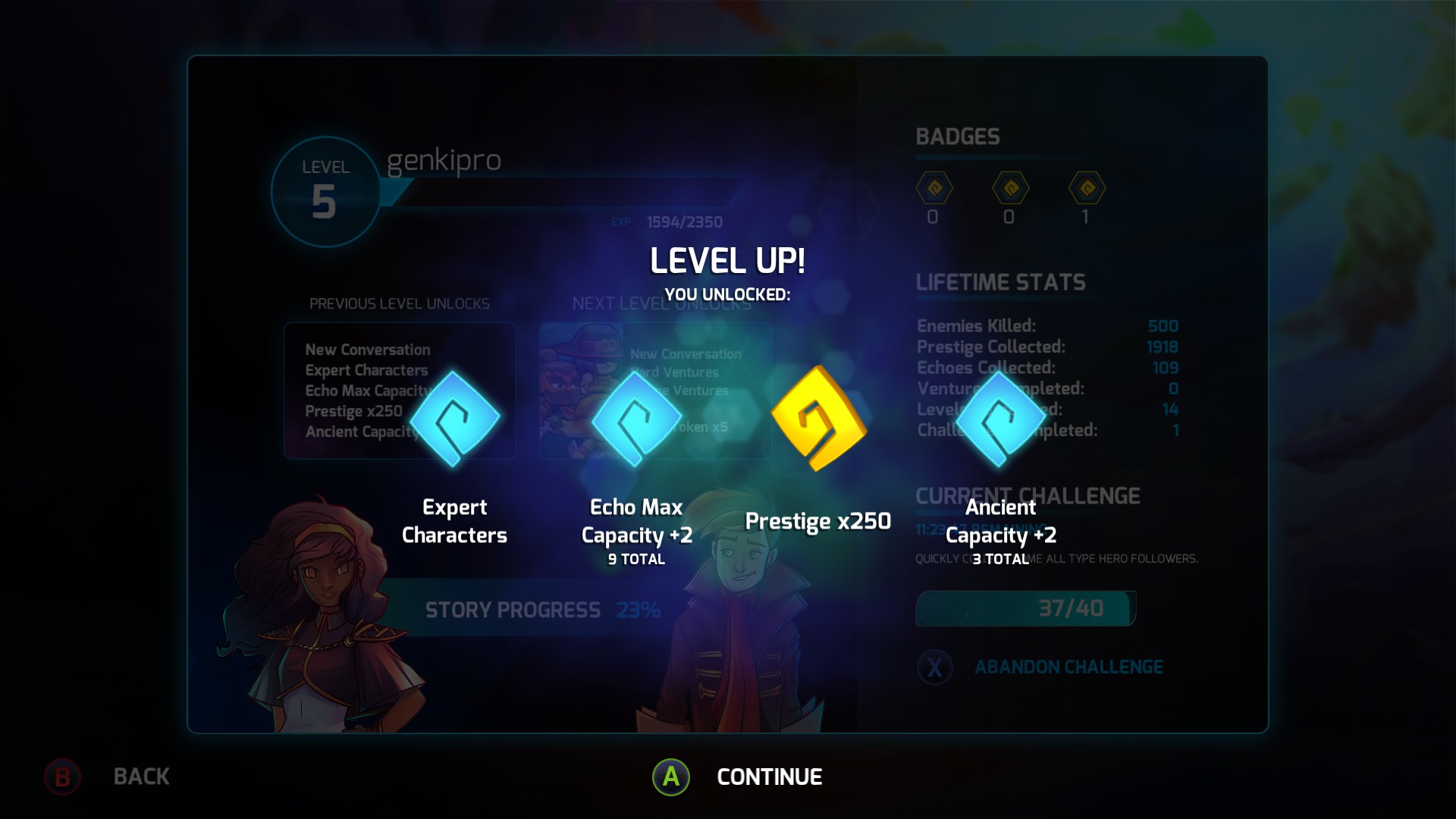 The game has full controller support, but I had a few issues when playing with my Xbox 360 controller. First, some buttons would fail to register in some menus, requiring me to move between menus to make them work. The starting character’s special attack requires aiming, but for some reason aiming that attack only requires the left stick. Why!? And when I’m in a menu, the B button should always go back or exit the menu back to the game; don’t make me press start or even A to continue the game. Oh, and there’s one issue for brand-new players: it’s far too easy to skip the tutorial, which doesn’t seem to be replayable. Using the Start button to quit a tutorial that you only seem to be able to play through once is not good design.

And that’s basically it so far. Everything seems a bit bland and dull, with all levels looking basically the same. Even though the developers have tried to mix it up a bit by including special modifiers for some levels, such as anti-echoes, bounties, or darkness (darkness sucks, by the way) — there’s not enough variation in levels or enemies to really keep it interesting. Game balance is such that even though you have a choice between nine characters, ten ancients, a handful of artefacts, and 20 or so abilities, you’ll relatively quickly find the character and selectables you like the best, and then you’ll probably just stick with that most of the time. 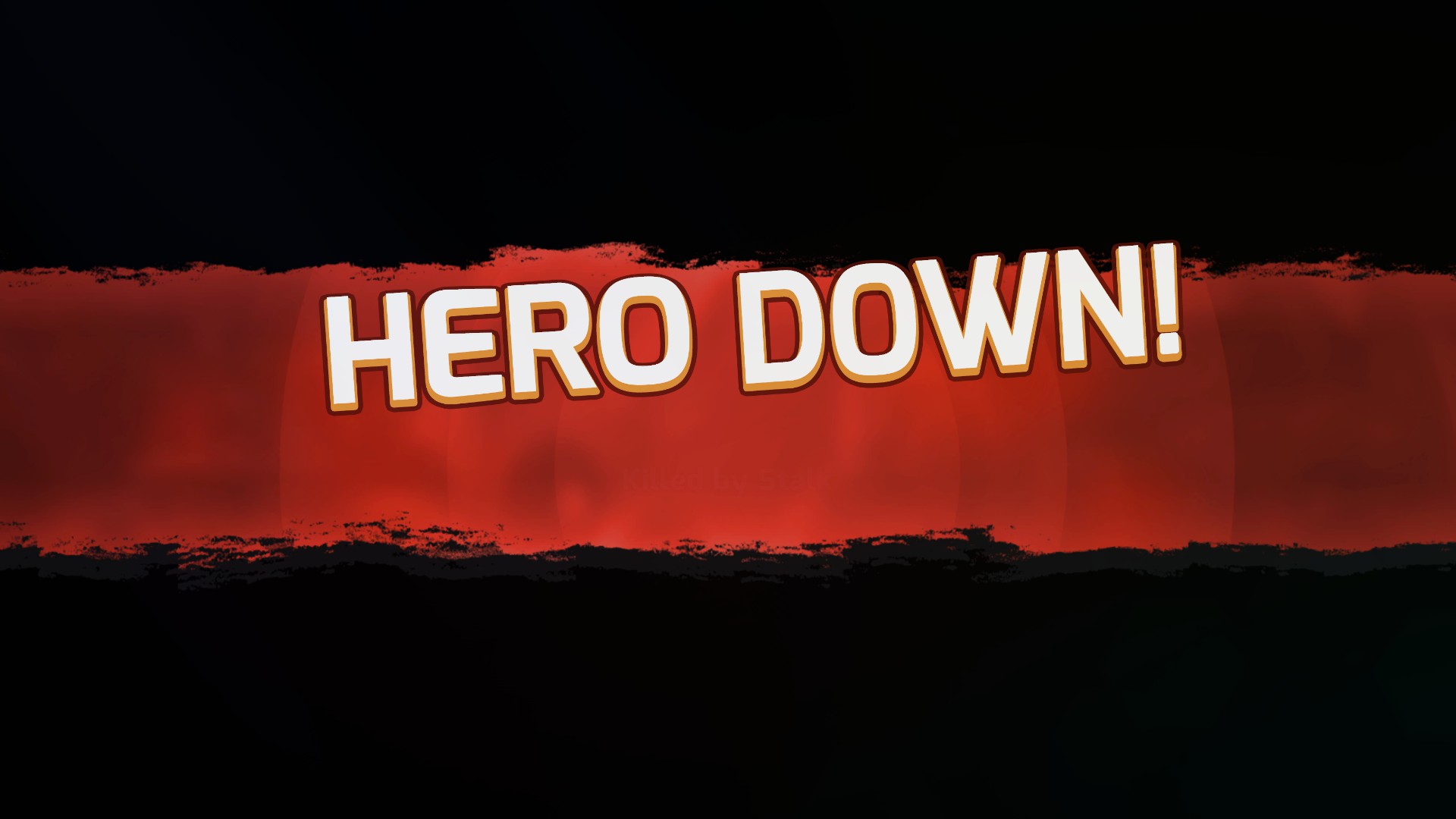 Though this preview is based on the beta, I don’t imagine Next Up Hero will have changed too much by its release into Early Access on Steam in the next day or two. It’s not a bad game, certainly, and the indirect, asynchronous player interaction idea is sort of cool, but the gameplay is fairly limited and repetitive, and the world a bit too bland and uninspiring for the game to really rise to the top of its genre.

If the developers fix all the annoying control and interface issues and add a whole lot more content during Early Access then it could definitely be one to watch, at the moment, though, it’s really just a mildly fun diversion with an interesting gimmick.