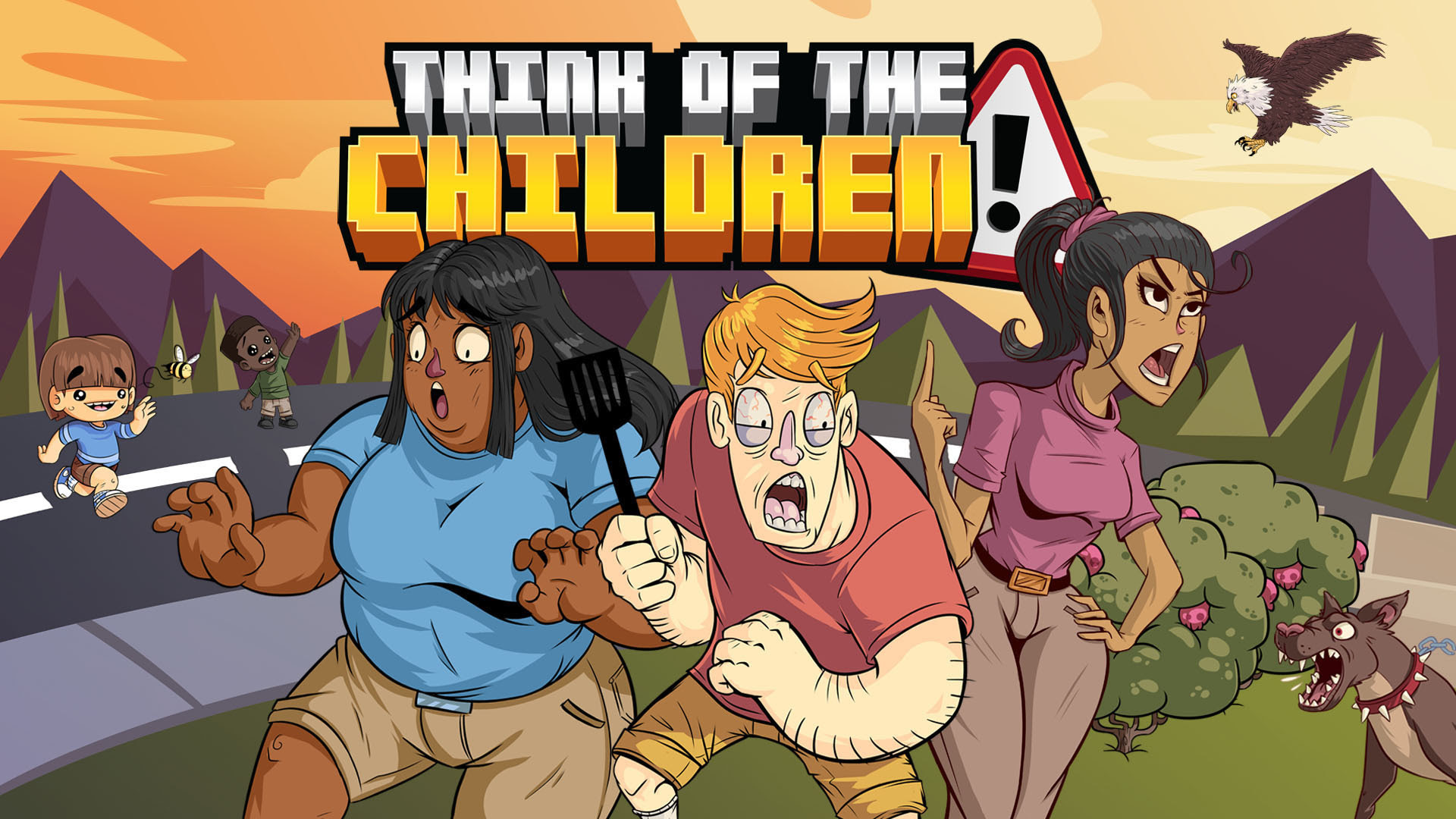 REVIEW: Think of the Children

Ever put your parenting skills to the test? Now is the time.

I will never say it enough: I absolutely love this trend of party games for up to 4 players on PC. Back when I was a kid and then a teenager, meeting at a friend’s place with an N64 was always a much-anticipated event. Now, we can do the very same on PC and have a fun social time while playing video games. This helped me connect with friends as well as family, gamers and non-gamers. The huge variety of games is a great tool for me to cater to the specific needs of my playing buddies. For instance, some people are very casual gamers and cannot even hope to win against an experienced player in brawling games. Thus, the fun factor is greatly decreased in how they experience the social event, and a feeling of frustration threatens to emerge. Thankfully, a new breed of game is getting popular since Overcooked: party games in which the aim is not to destroy each other, but to cooperate in achieving a common goal.

Think of the Children proposes to put players in the shoes of parents attending a specific event, such as a retreat to the beach or a visit to the park. There are many activities required to make the event go smoothly, such as making sure food is on the table, setting up the piñata and so on. Just repeatedly press A in front of an activity. If that was all there is to do, that would be easy. However, the pesky kids are absolute brats and keep running around playing where they shouldn’t and touching everything. If this wasn’t enough, if they are not separated from the dangerous hazard quickly enough, they get themselves killed. Those deaths are usually hilarious, such as getting eaten by birds, flattened by a fridge or run over by a luggage carrier. On top of that, with one of them dying the player has the unparalleled advantage to have one less walking disaster to worry about! 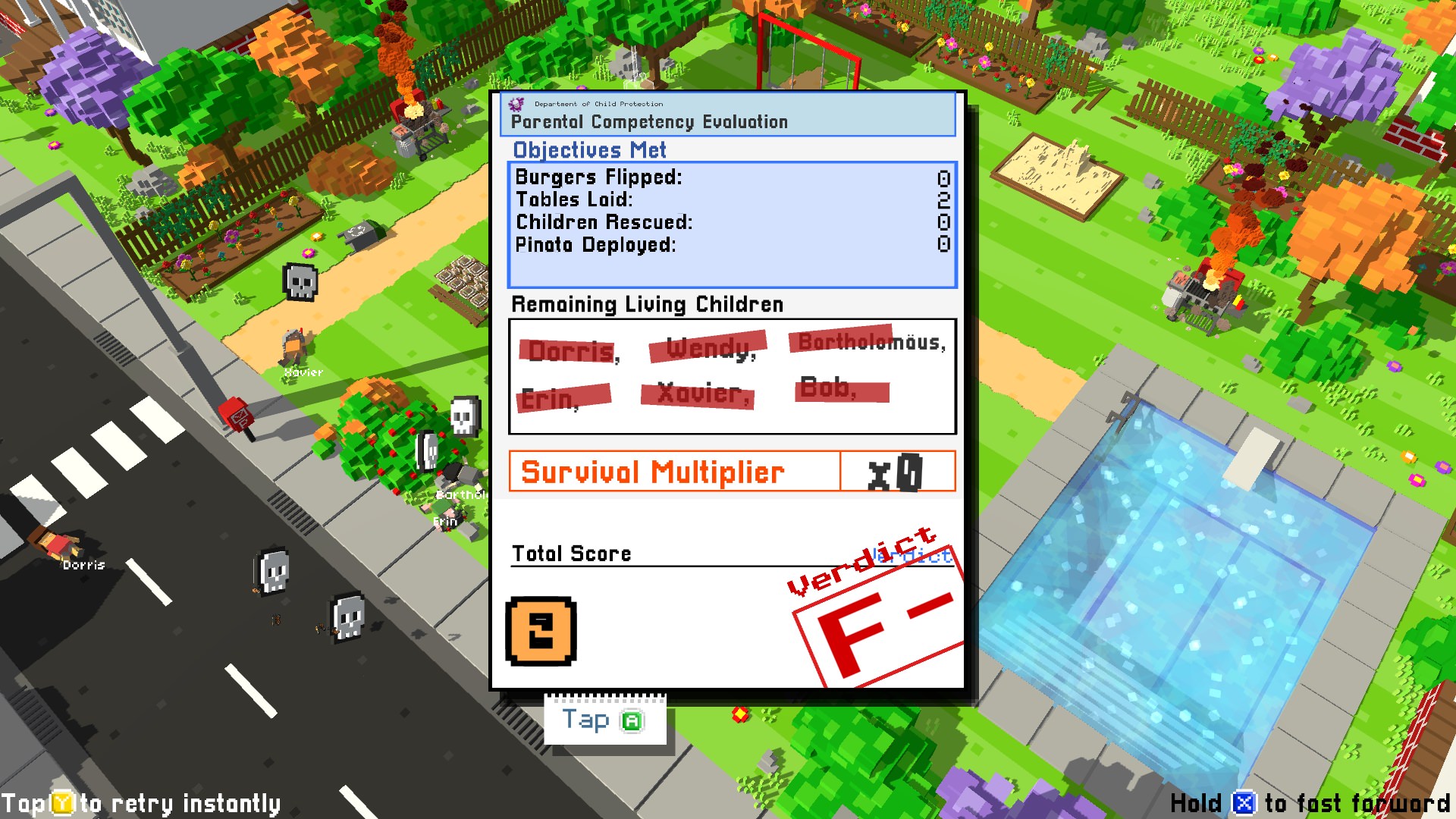 Sadly, the game is not about laughing sadistically at the death of the children, it’s about beating a certain score to progress through the levels. And let me tell, you, losing kids severely harms that score. Damn. No easy way to do this, we have to save those awful little monsters! While attending the little objectives specific to each level. The result is pure chaos with everyone running in every direction, trying to manage both the urgency of saving the kids and the distracting objectives. Players are yelling, laughing, crying, this is madness and this is pure fun. 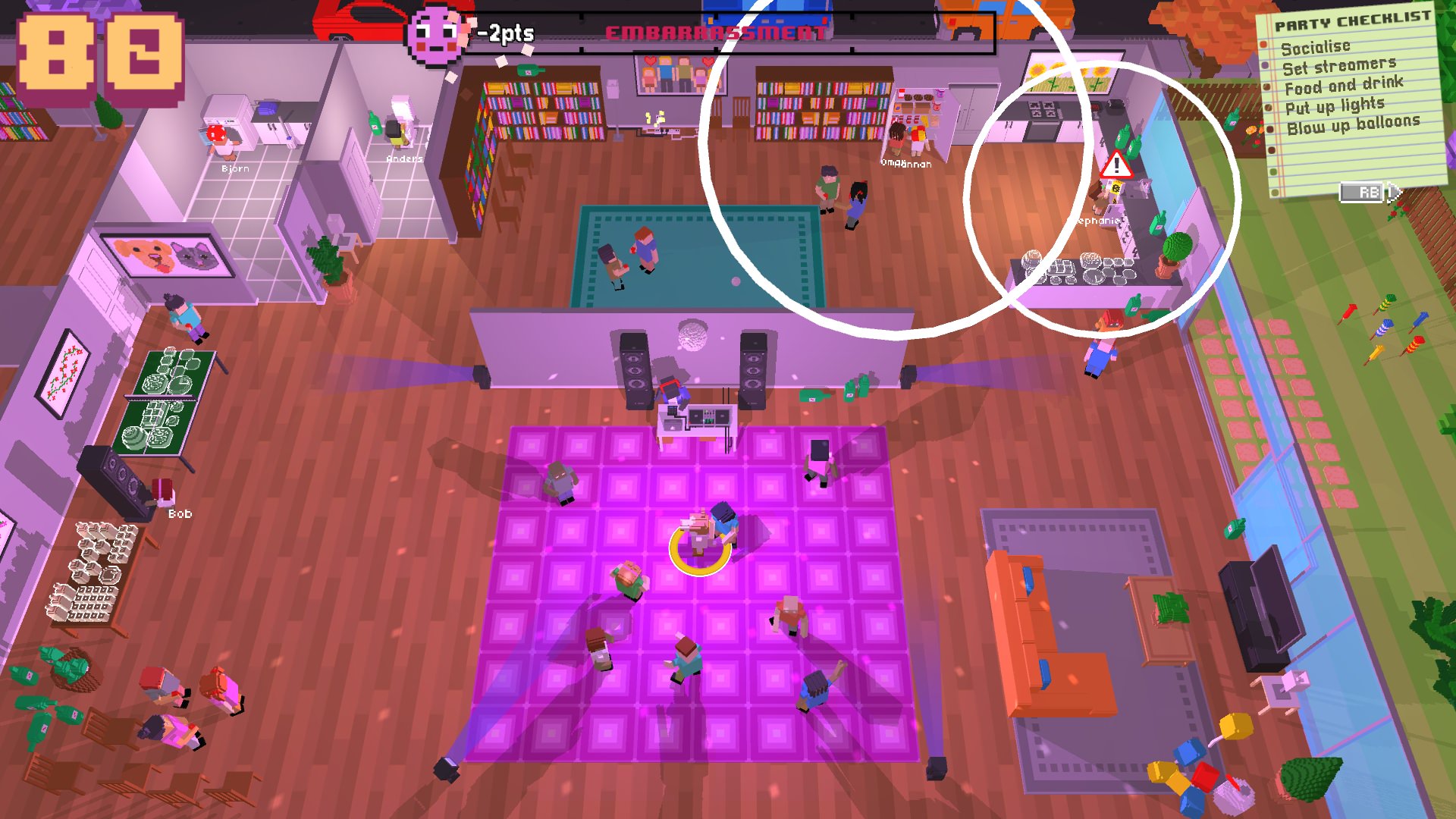 Pacing is an important factor in these games. Pacing is perfect in Overcooked, with each action lasting the right amount of time to give a second to think at the next step without giving enough time to get bored or too much overwhelmed (that is, when the team has managed to organize themselves well). This was my main issue with the game No Heroes Here, in which micro-actions were too short to give time to think and yet too much time was spent with these micro-actions rather than in organizing or deciding what to do. The platforming didn’t make this any easier. Think of The Children falls halfway between those two games: there are too many micro-actions and too much chaos to be able to take in what is going on, a bit less frantic would be slightly better, especially on some maps. However, there is more player agency and freedom, as well as room to breathe than in No Heroes Here. The problem is that the number of kids seems constant no matter how many people play, which means that the difficulty appears much harder when there are fewer players to run after the kids. Maybe the score to attain is different, but this is still a burden on the experience of the game. This was especially true during some levels when I played with my father who is absolutely not an experienced gamer. For instance, the airport level requires each player to accomplish their own individual tasks (checking the luggage, stamping passports and going through the X-ray). Any other mission when the tasks were common to everyone, I was able to carry the game for my father. But for this specific mission, I could not complete his tasks and thus we could not reach the ideal score. I then had to play this mission by myself so we could progress forward.

Another contentious point is the fact that the activities are sometimes confusing, there can be small items to carry and figuring out what to do on each level can take some time. While this might seem a negative, I actually enjoyed that part. It made each level feel like a new beast to tame rather than just repeating old habits, and the exploratory phase led to socializing by trying to figure out what to do and teach others what needs to be done. A bit like those moments in Overcooked when the players organize and distribute tasks. 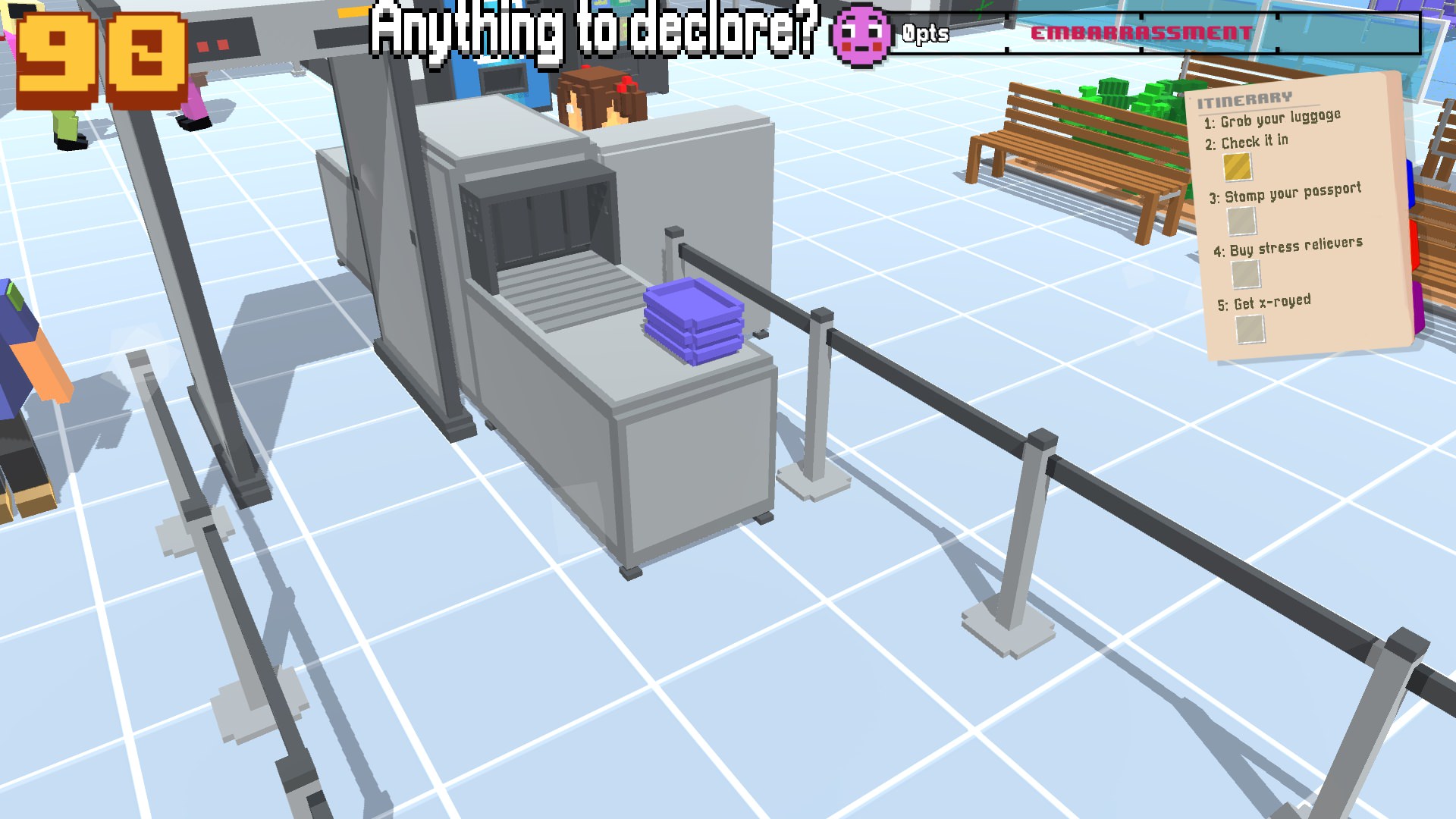 Another slight issue I have with the game is that there are many buttons to use: whistling, actions, picking up kids, running. While this does not seem like much, this can be confusing and difficult for casual gamers who are not used to managing more than two buttons at best. This is again a minor criticism, they eventually pick it up, but I still feel that it is important to evaluate how well these games work in a social event with non-gamers. Since I mentioned the buttons, I am happy to confirm that all keys are rebindable, although sometimes my controller was not fully registered by the game. The rest of the options menu is perfect, separate sliders for the audio and several graphical settings. The game is in 3D but thanks to the voxels it can run on older hardware. And the result looks quite nice! 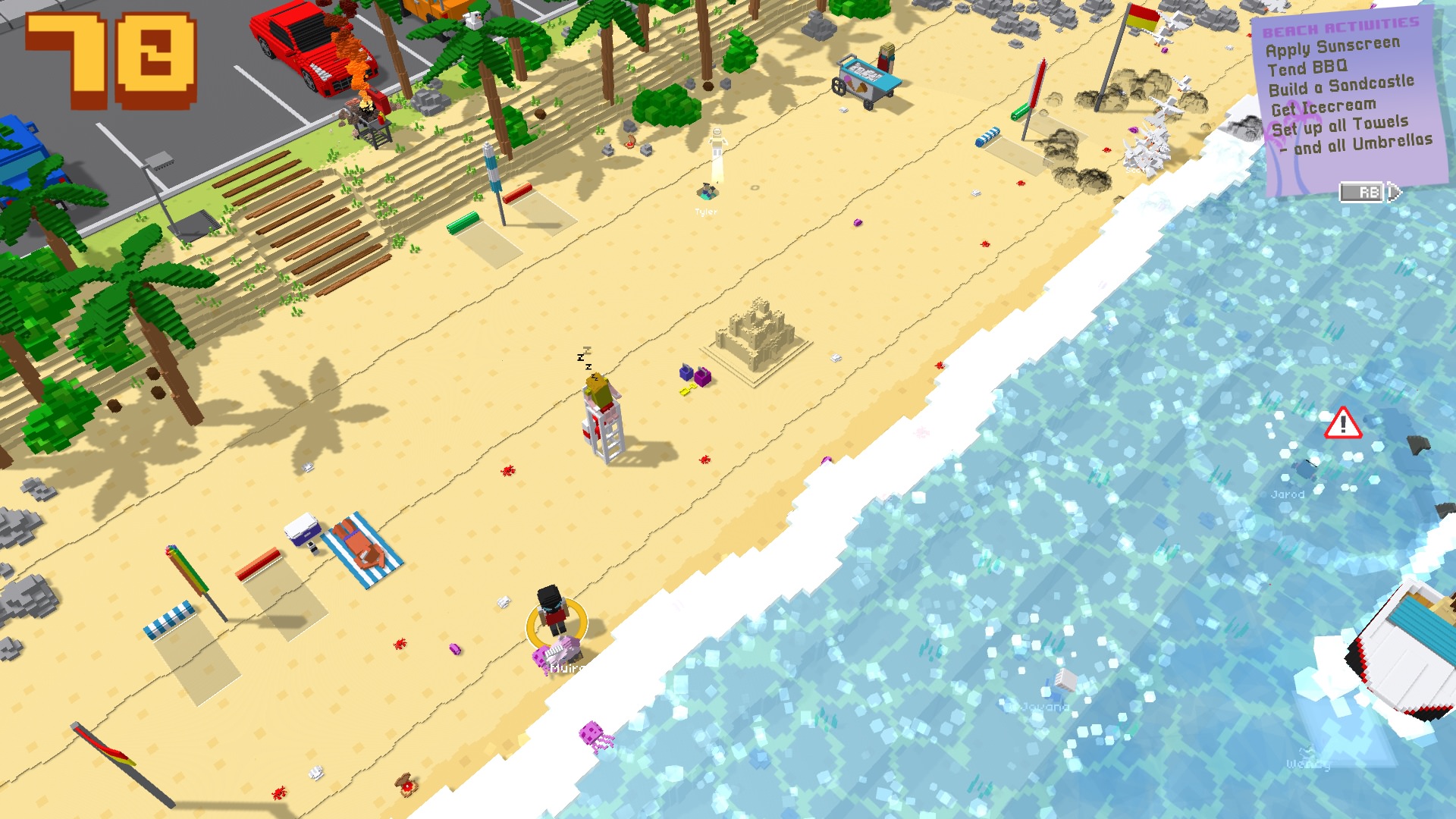 Flavoring the kids before they are eaten

In addition to the funny campaign (the story is told through flashbacks from parents being on trial in court) and the arcade mode, there is an editor to customize parents and kids to select from, or they can just be picked randomly among several choices at the start of the game. New pieces of clothing are gradually unlocked, but I was very happy with the basic random choice. 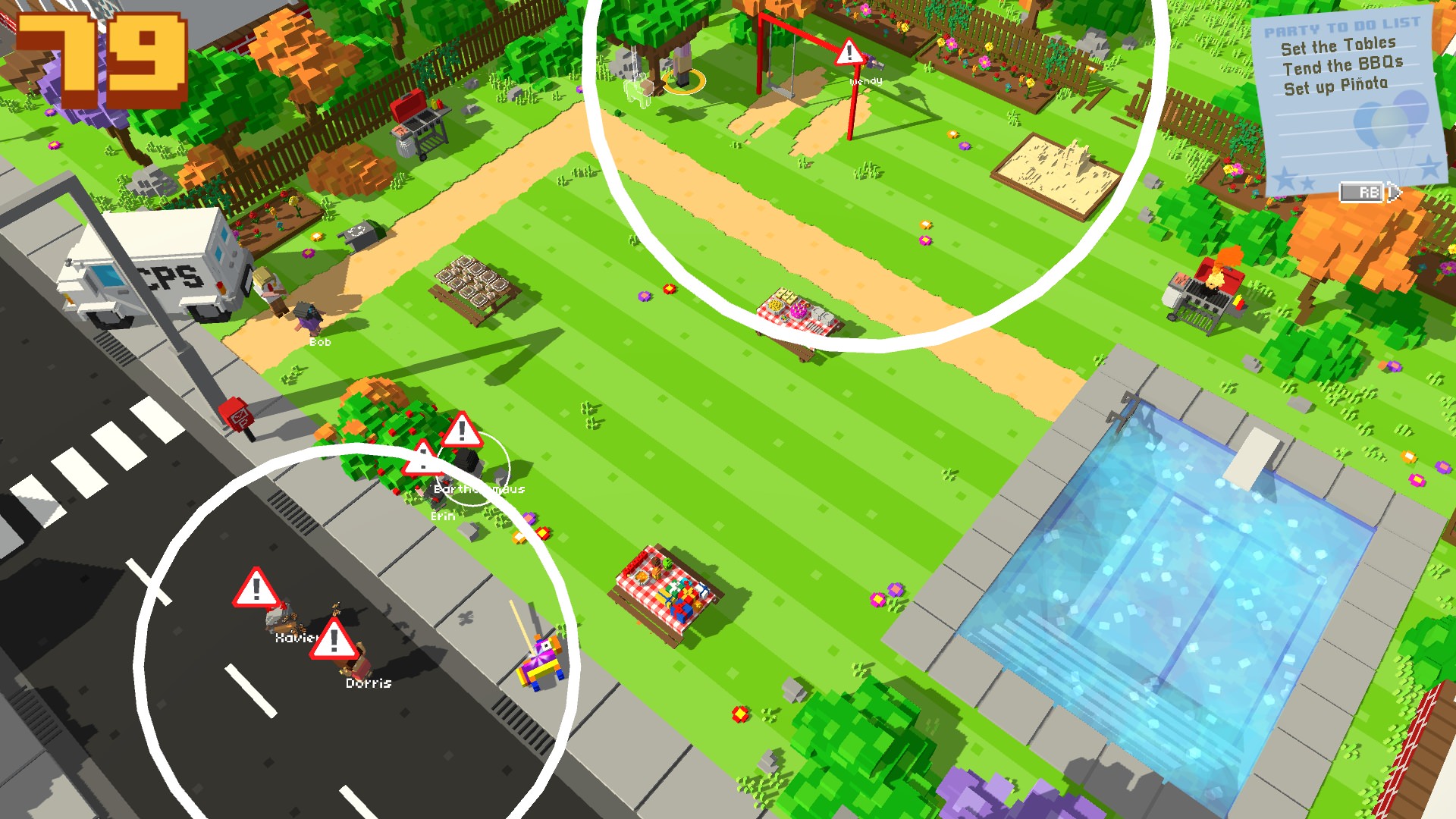 Think of the Children is an absolute must-have in your party games toolset. This is a chaotic and fun cooperative game in the lines of Overcooked, and it has the added benefit to convince anyone hesitant about a parent never to have kids. Or to reassure current parents that, well, quantity is the way to go to compensate for the inevitable losses. You can’t be everywhere at the same time, right? Who else is going to set the table while Jonathan drowns himself in the toilets and Laeticia tries to tickle a shark?