In Yorkshire Gubbins — what there is of it so far, anyway — you control Steggy, a lass from Yorkshire with a penchant for droll comments and an affinity for pie making. In the introductory episode, a robot introduces both you and Steggy to the workings of the game’s interface in Verb School, and at the bargain price of only 20p, too!

The game proper begins after that, with the episode called Humble Pie. This sees Steggy foiled in the last stages of preparing her entry for the Yorkshire Pie Competition when she finds a serious problem with a key pie ingredient: her Special Meat is in fact only normal meat in a Special Meat wrapper.

Pixelated point-and-click hilarity ensues as you guide Steggy through various encounters and simple inventory puzzles in search of some real Special Meat, and a chance at pie greatness. 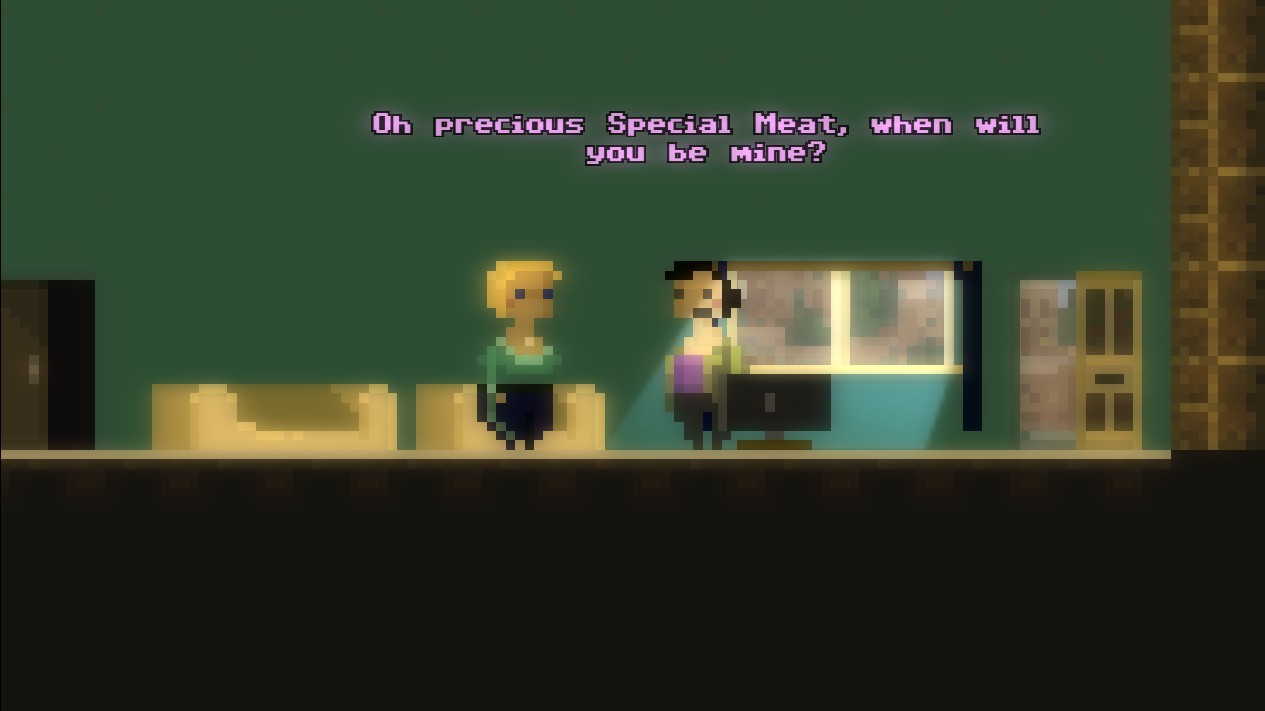 The graphics in Yorkshire Gubbins are chunky pixel graphics. They’re really chunky: too chunky to really enjoy in full-screen at HD resolutions, and much more chunky even than something like Lucasarts’ The Secret of Monkey Island (the original), from the 1990s.

The game only includes a small number of characters and locations. Locations are somewhat bland — but then again, the game is set in a town in Yorkshire! — but the characters have all been infused with some personality. Each character has an idle animation, and in-game objects are drawn well enough to at least be recognisable.

The interface is extremely simple and SCUMM-like: a series of nine verbs, each of which can be applied to selectable objects on the screen. The cursor is a set of large white crosshairs and interactive objects or characters are indicated by partially formed sentences at the bottom of the screen, using the currently selected verb. 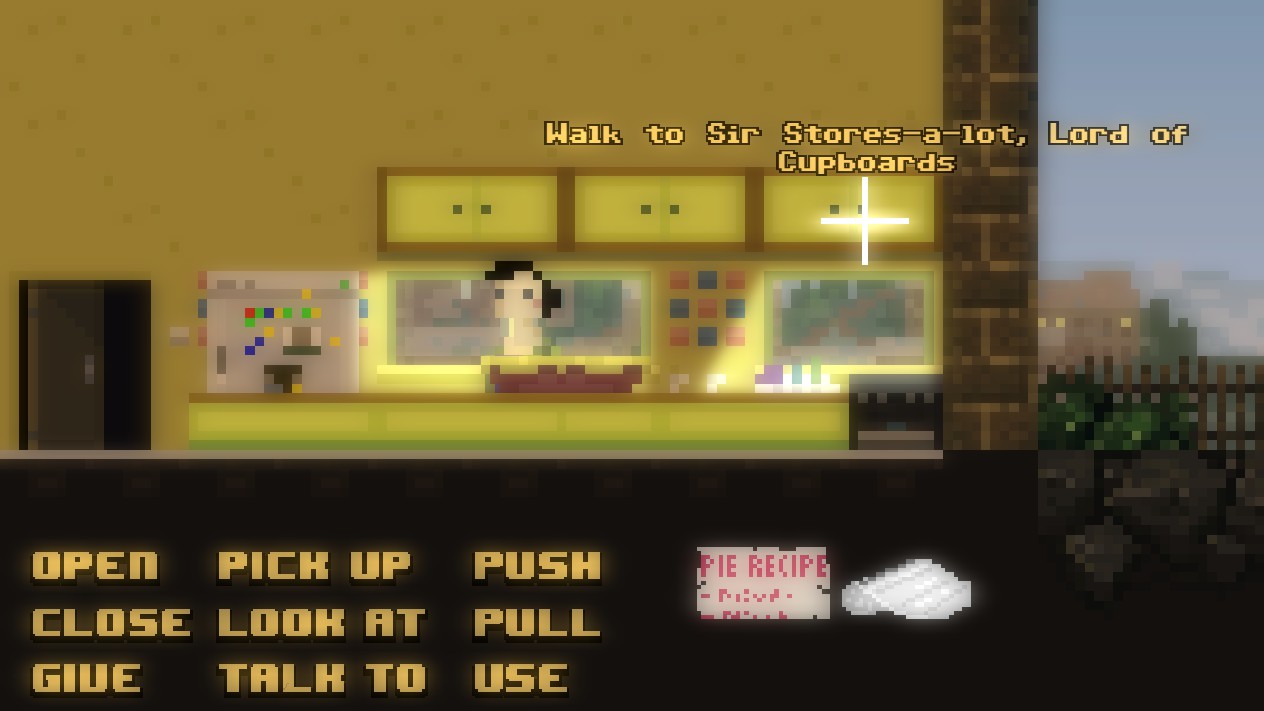 The game has minimal music, but what is included fits the game and setting perfectly and is well produced: simple ditties using only a couple of instruments. I don’t recall any sound effects, but there may have been some.

The big appeal to the game’s audio is the fully voiced dialogue, mostly consisting of Yorkshire accents. (I admit, I’m not familiar enough with Yorkshire accents to know if these are real, but they sound pretty convincing to me.) Every line of text in the game is spoken and the voices mostly sound professional and work extremely well. I did hear a few places where it sounded a little muddy, and a couple of voices that didn’t sound quite as convincing as the rest, but overall it was well done.

Subtitles are optional. I kept them turned on and noticed a few places where the spoken text was different to the written words, which I always find a bit jarring. The grammar was mostly excellent; I only noticed a couple of errors across all three current episodes.

There are limited options: three volume levels each for music and sound, fullscreen / windowed mode toggle for graphics, and a single special effect filter: “Steggyvision’, which appears to be a sort of bright blur lighting effect for characters and interface elements. I can’t imagine any modern PCs experiencing performance issues with the game.

Yorkshire Gubbins is a traditional point-and-click adventure game. The game takes place in the top three quarters of the screen, with the bottom quarter being reserved for the simple interface: nine verbs, selectable by word, and a small inventory area. As with any point-and-click adventure, your goal is to find your way to the end of the story by solving verb- and inventory- based puzzles. The gameplay offers nothing revolutionary; indeed, it is obviously heavily influenced by the classics of the genre, such as the SCUMM-based Lucasarts games of the 1990s, and it does a good job. 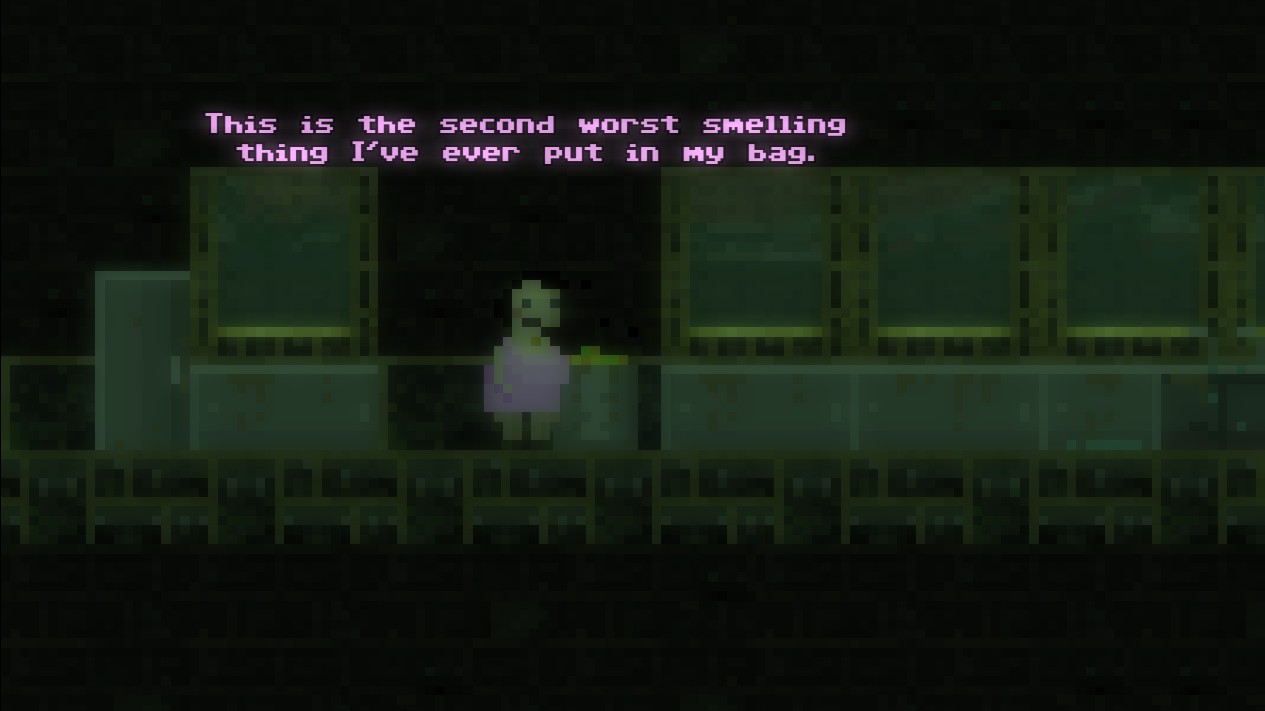 The core of every good point-and-click adventure is its puzzles, and Yorkshire Gubbins follows the rulebook here, too. There’s nothing outlandishly difficult and, so far at least, you shouldn’t need to resort to a walkthrough. I did find one puzzle that was a bit fiddly and required a bit of the old “use everything on everything in the scene” tactic; though I knew what I wanted to do I just couldn’t work out how the game wanted me to do it.

The game is divided into episodes. Currently there’s a short tutorial of about 10-15 minutes’ length, a single episode of somewhere between 60-90 minutes, and a ‘bonus’ prequel episode with a play time somewhere between the other two. Even though the game is not marked as Early Access, the developers are being generous and planning to offer a few more episodes free to owners of the game over the next year. So while the game as it is now only provides about two hours of play, you can expect more over the coming months.

The script is well written and the game’s main drawcard is its humour, which I found entertaining; it didn’t fall flat like many other comedy games and it even made me laugh out loud a few times. 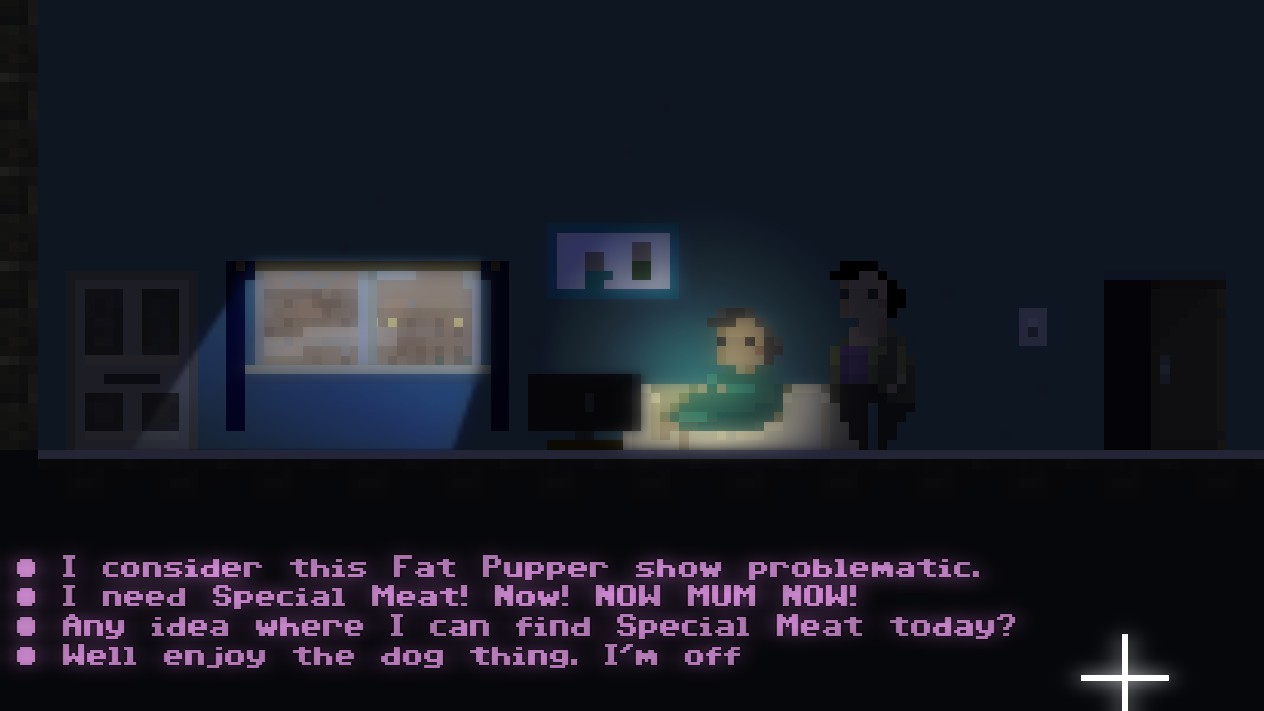 Yorkshire Gubbins is a very welcome addition to the point-and-click adventure genre, with comedy that’s light-hearted and fun. At the moment there’s not much here, but what there is is well written and funny. The promise of up to another four long episodes over the next year adds to the appeal. Yorkshire Gubbins made me laugh out loud more than once, which is quite rare in this age of memes and in-your-face slapstick.

If you like point-and-click adventure games and you appreciate good humour, then pick it up and take a look.