The Horus Heresy: Betrayal at Calth is an as-yet extremely short turn-based foray into the Warhammer 40K universe, focusing on two legions of Space Marines.

The Horus Heresy: Betrayal at Calth is the latest game from indie developers and publishers, Steel Wool Studios.

Betrayal at Calth is set in the well-known Warhammer 40,000 universe and focuses on the human elements in that world: the Space Marines. It is apparently heavily based on the tabletop board game, Betrayal at Calth, in which the Ultramarines are betrayed by the World Bearers on Calth, causing a schism in the Imperium. In the campaign mode, you take control of Magos Sarc and a squad of Ultramarines as you try to recover from the attack on Calth and rally forces to repel the invaders.

The game supports VR, but I’m not fortunate enough to have a VR setup, so I’m only reviewing the standard PC version.

The game is presented in full 3D, with reasonably free controls over the camera for panning and rotation. The graphics look a little cartoonish, with simple, rather bland texture maps and seemingly quite low-poly models with no anti-aliasing options. The special effects are rather nice, though, including fire and smoke, though the weapon effects could use a bit more “oomph!” I wonder if the graphics are deliberately fairly ‘low impact’ so as to not cause performance problems for the VR version.

Animations are reasonable, but with no variations. Weapon effects are pretty underwhelming, though fire and smoke look reasonably nice. Destructible terrain just disappears when attacked, rather than exploding or otherwise providing some sort of interesting reaction. While somewhat interesting, the settings for each mission make the world of Calth feel rather lifeless, too, as if it’s simply a sparse generated battleground rather than a fully inhabited part of Imperium space that’s just suffered a devastating attack. 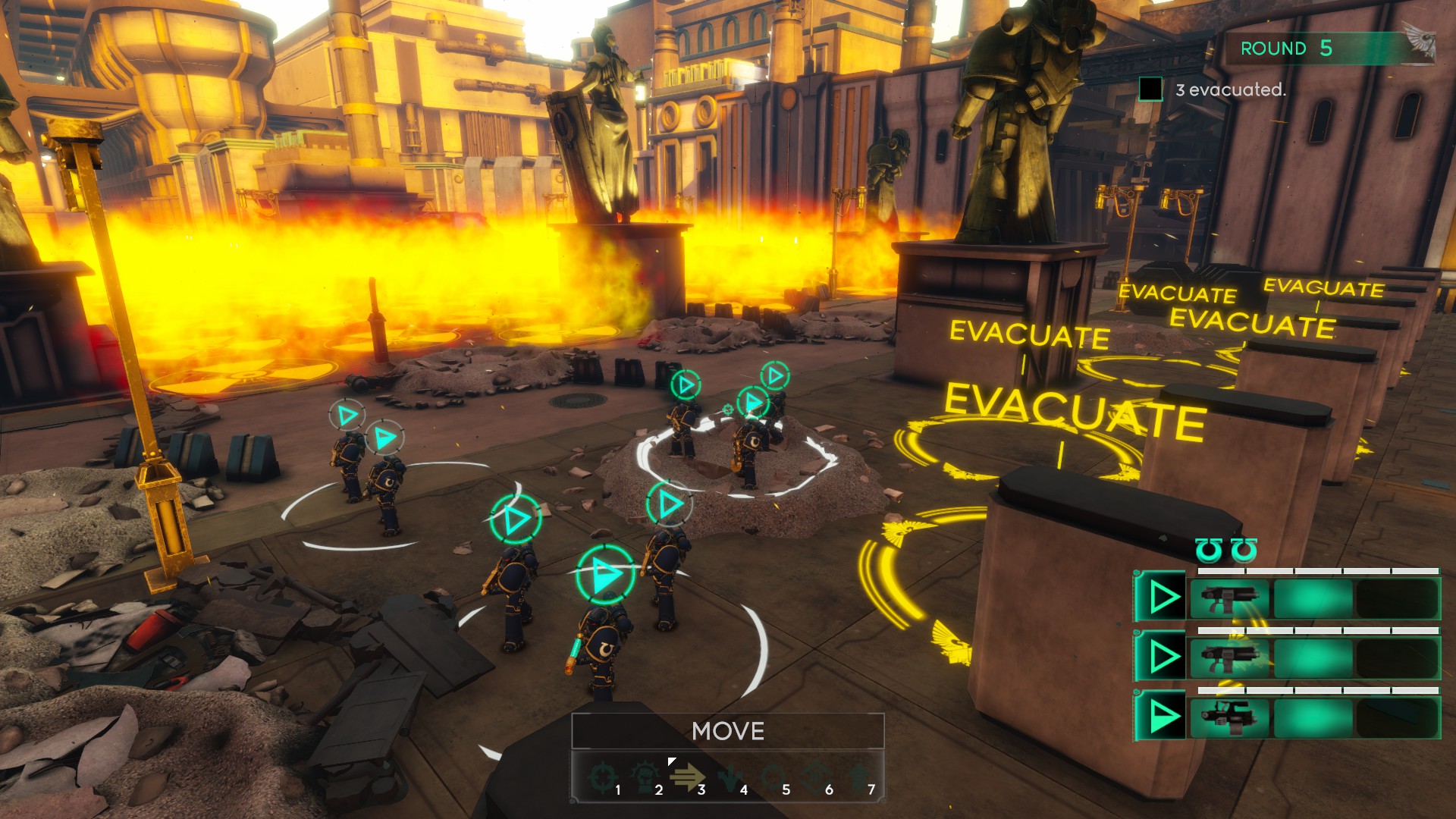 The user interface is a mix of standard 2D overlay and a sort of holographic style with semi-transparent 3D overlays. It takes a bit of getting used to and also looks quite dated. It’s unfortunate that it provides very little information on units, abilities, items, or pretty much anything; it’s basically only useful to move units around and attack things. It really needs some tooltips or information screens. 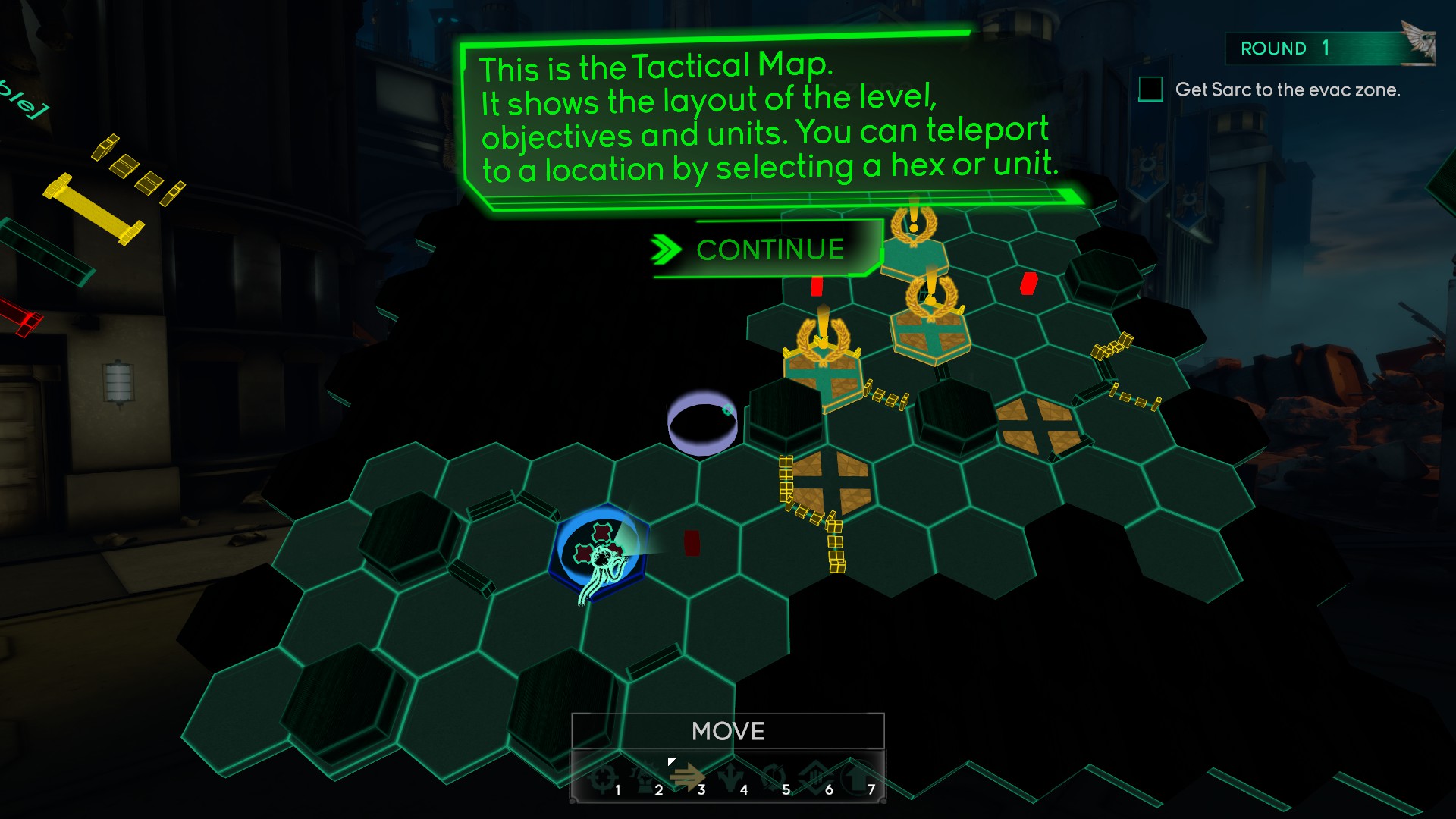 Sound-wise, the game doesn’t currently fare much better. Music is limited to some title music, which is largely interrupted by the fire sounds at default volume levels, and, perhaps, some seemingly inappropriate background music on some stages of the campaign. Voice-overs are well produced, though rather wooden, but too quiet and with no independent voice volume slider. Sound effects are okay, but seem very loud compared to the music and voices, so attacking any units after trying to hear the voiceovers may result in waking up your neighbors.

Options are extremely limited and comprise three buttons for graphics quality — LOW, MEDIUM, and HIGH — and independent volume sliders for sound effects and music. I didn’t encounter any performance issues, but the game made my PC run very hot, probably because there was no vsync option.

There are also a number of graphical issues. First, camera panning is extremely slow and often gets stuck on world objects or terrain. Subtitles are sometimes overlaid on interface elements so you can’t read either. Sarc’s override ability has no animation — nothing happens for a few seconds and then the target device is overridden. The game map can disappear sometimes and individual units sometimes inhabit the same world space after merging (see screenshots). You can sometimes see enemy units that are hidden by LoS rules. In Lexicanum mode: the Windows mouse pointer is visible as well as the crosshairs. 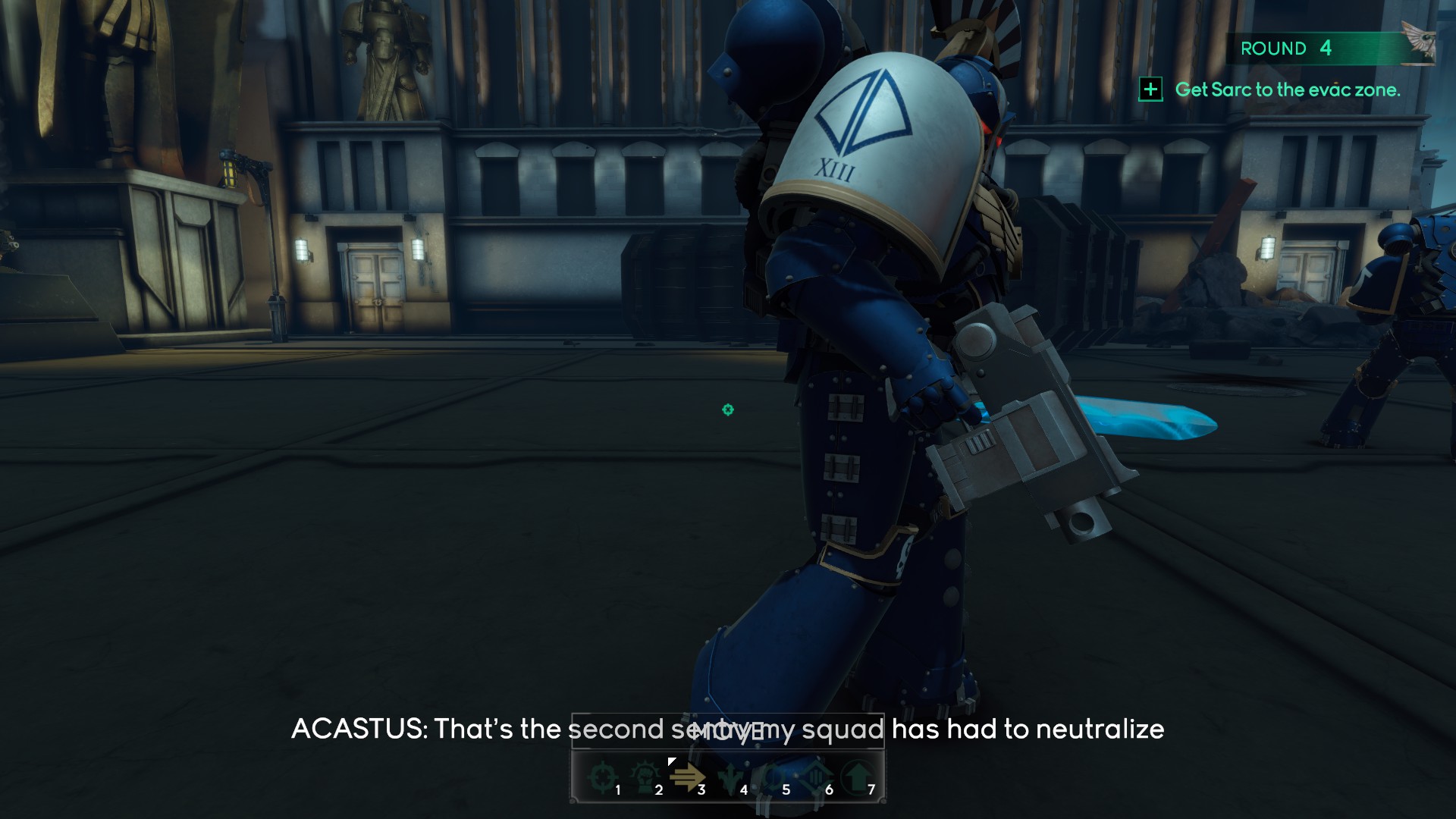 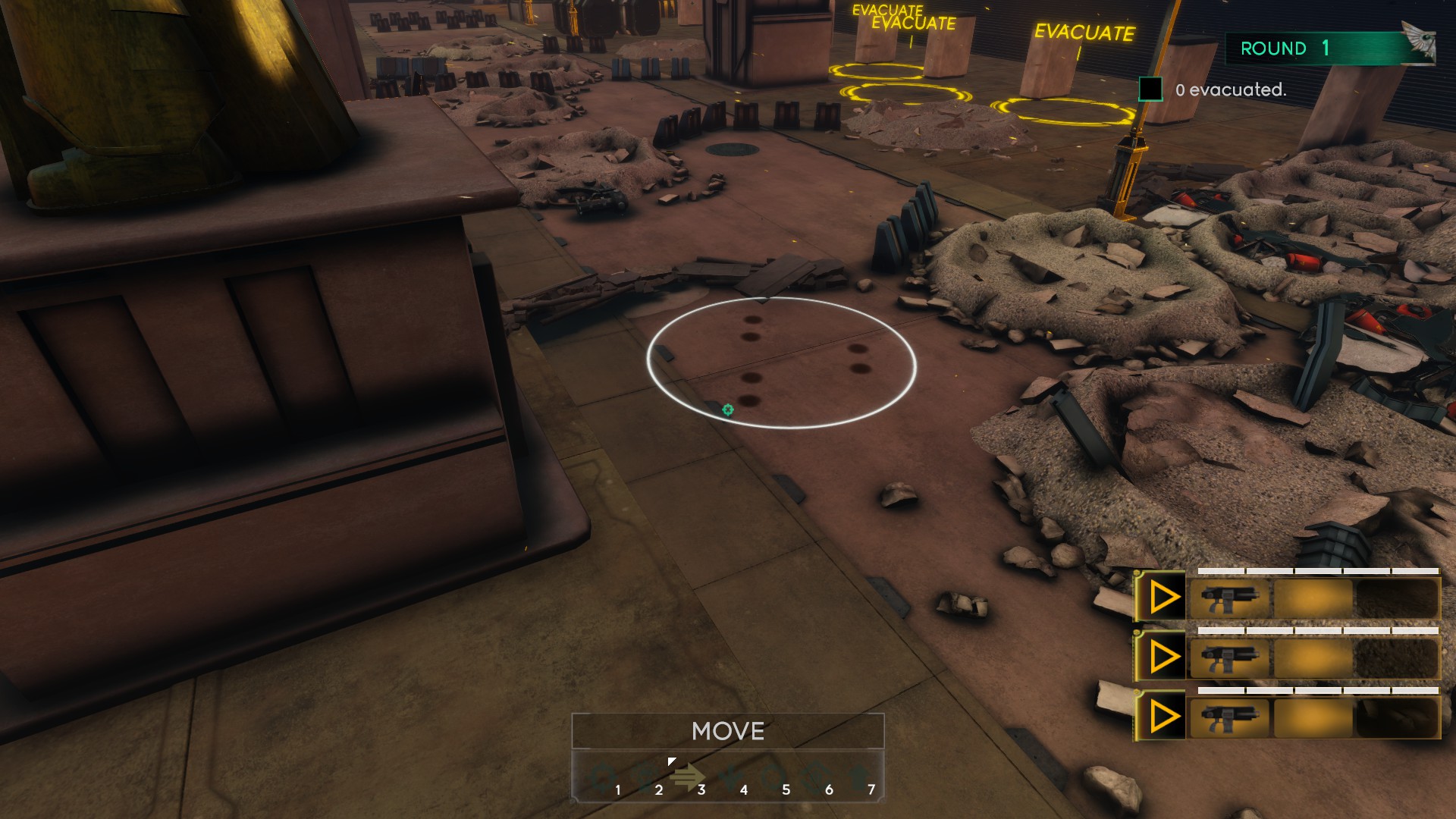 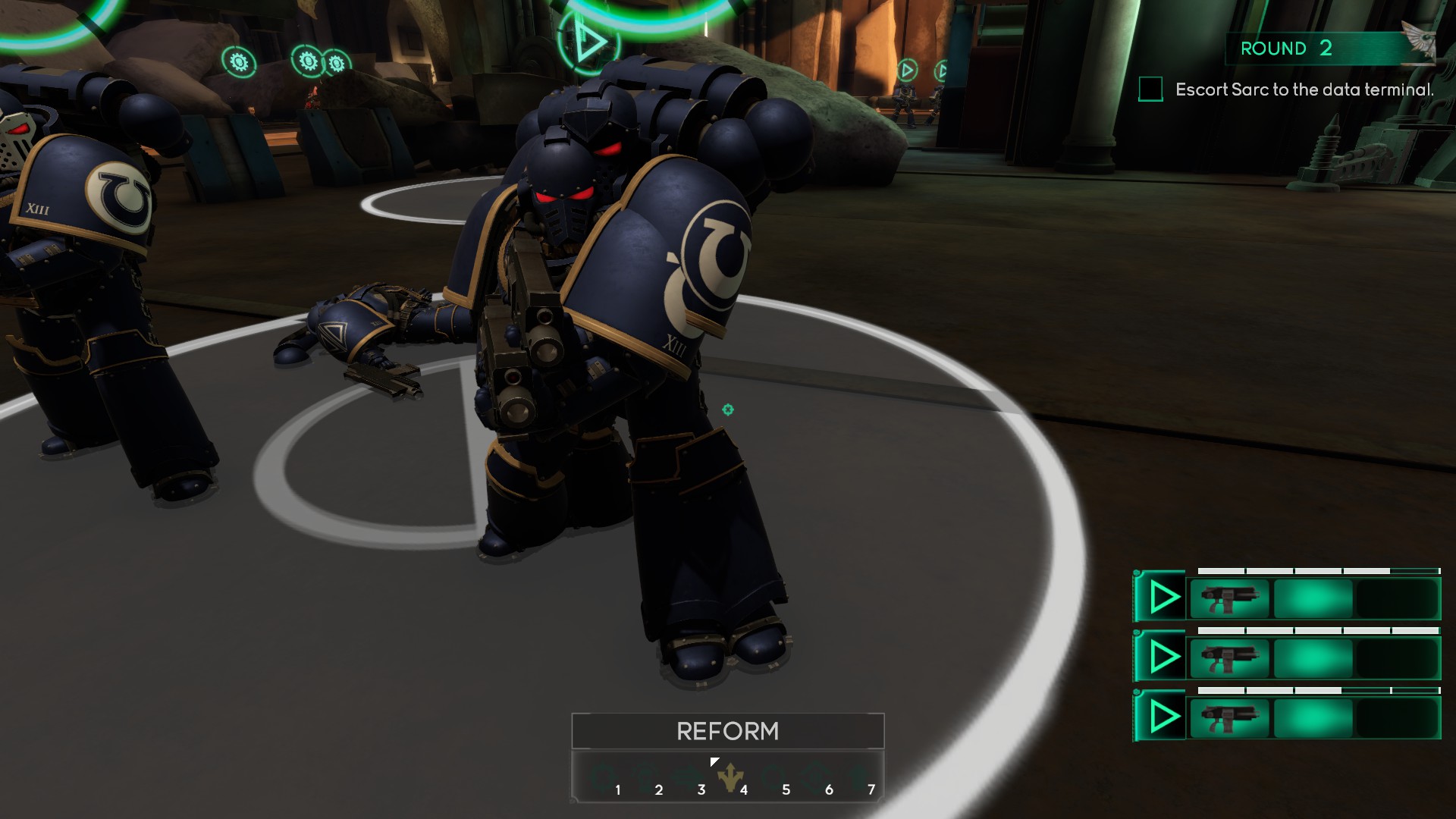 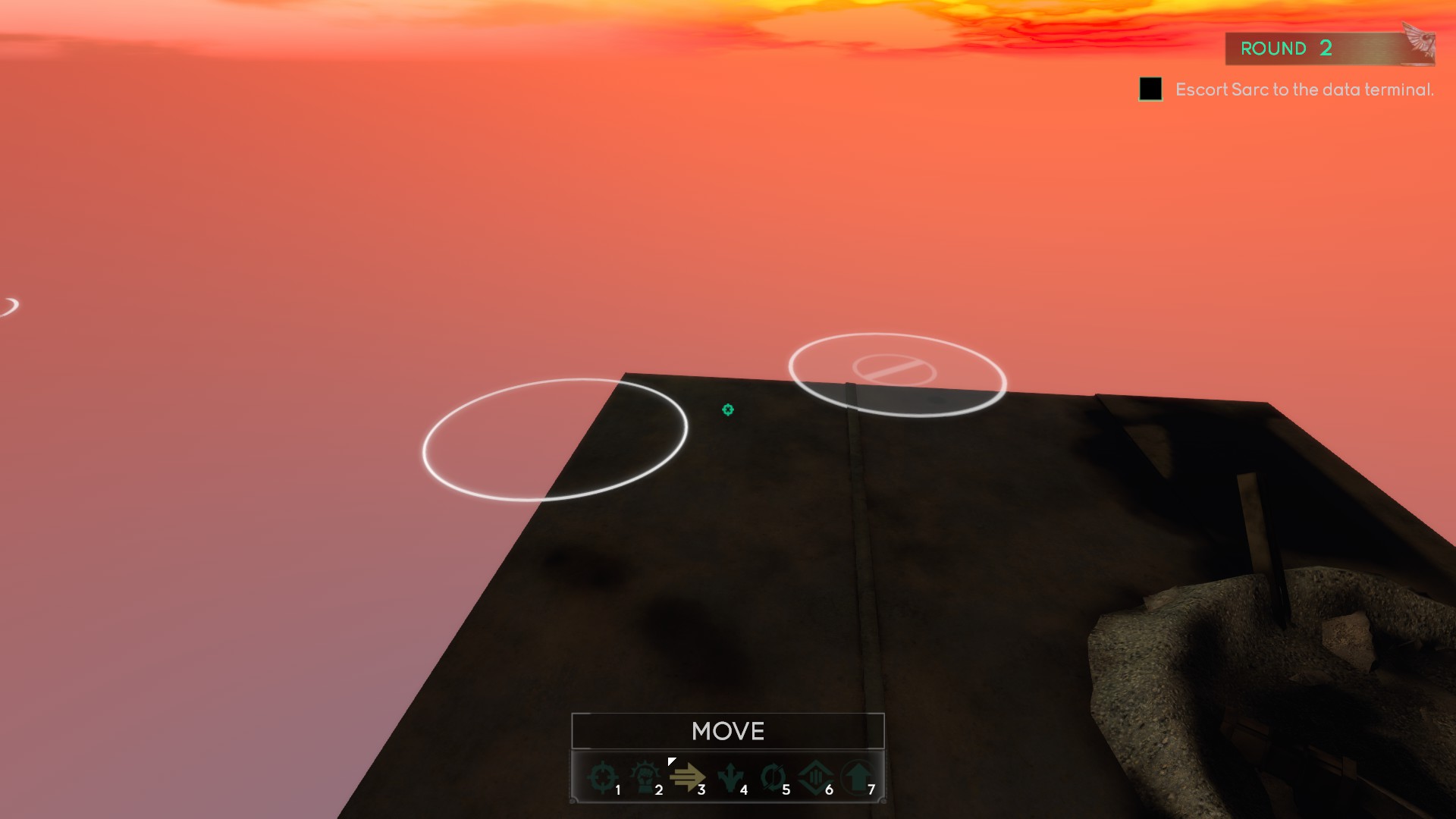 Betrayal at Calth is an alternating turn-based strategy game: each round, you and your opponent each take turns in moving one of your units until they are all out of Tactical Points, then a virtual die is rolled to determine the starting player for the next round. I haven’t played the source board game, but the rules, characters, and equipment are similar enough to other Warhammer titles I’ve played that it is somewhat familiar.

The game currently only provides the first chapter of the single-player campaign mode and four multi-player maps, with two different modes in each, as well as an army builder. As I’ve been playing pre-Steam release I’ve been unable to find anyone to try out multi-player. I completed the single-player component in about 75 minutes. Although this is a reasonable introduction to the game I wouldn’t want to play through any of the missions again; replayability would have to come from multi-player battles. But further campaign-mode chapters are due to be released during Early Access. 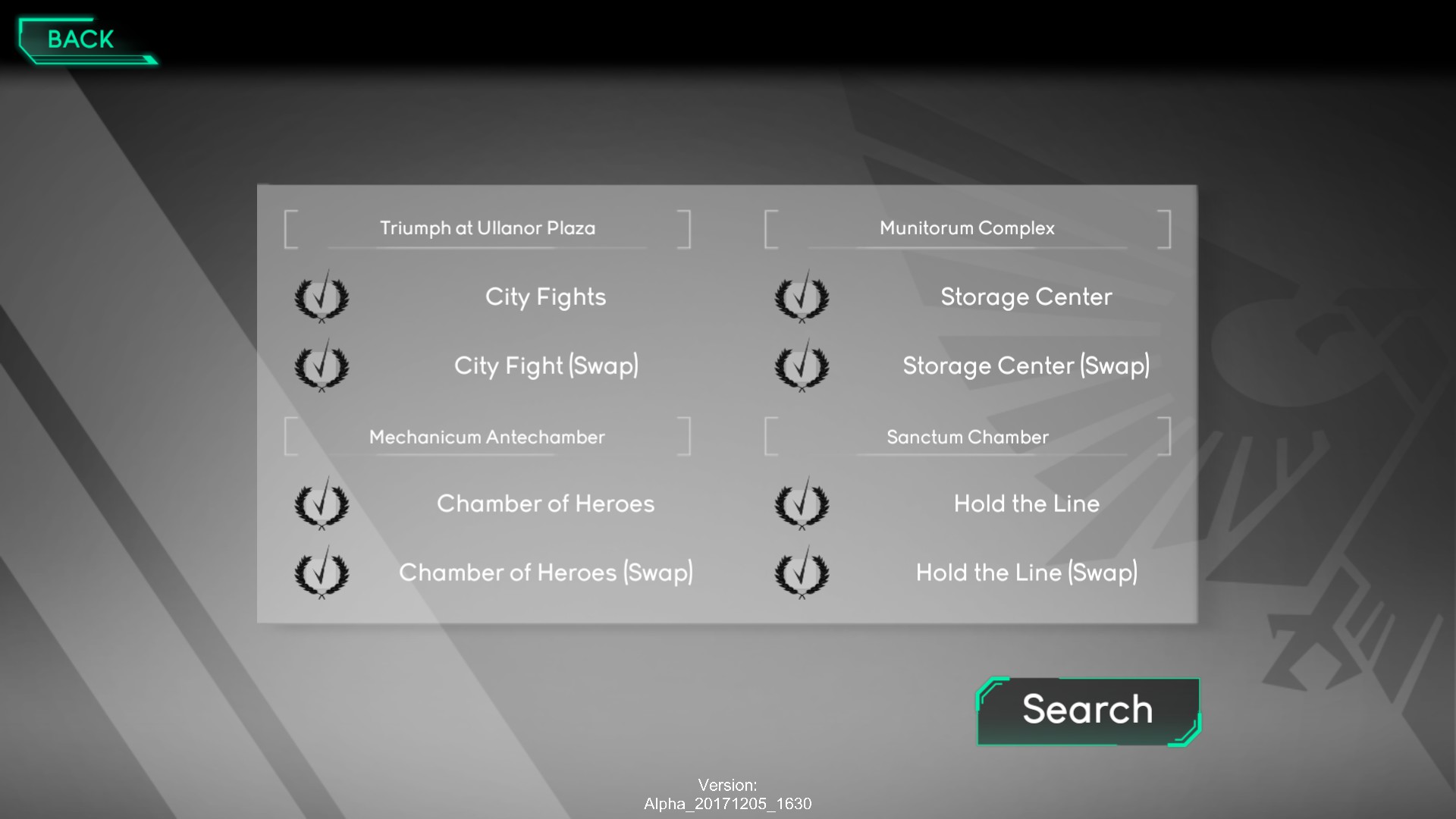 The game also includes “Lexicanum” mode, which isn’t explained at all. This seems to put you into a free-roam FPS mode in which you can’t interact with anything, while intermittent static sounds play. I’m not sure of its purpose.

I rather like Warhammer 40K, though I admit I know only a little about the game universe’s lore and I’m typically much more partial to Orks or Chaos than Space Marines. I’m familiar with Space Marines, too, so concepts like power fists, bolters, and terminators aren’t new to me. That said, I found the complete lack of game information available in-mission frustrating; the game shows you a hit chance when attacking and some icons representing armour and tactical points remaining, but I don’t really want to remember that my missile launcher adds +2 Attack per extra marine in the target unit and that one particular type of terrain or barricade gives me protection, but the others don’t. Tooltips and information about in-game objects would be invaluable. 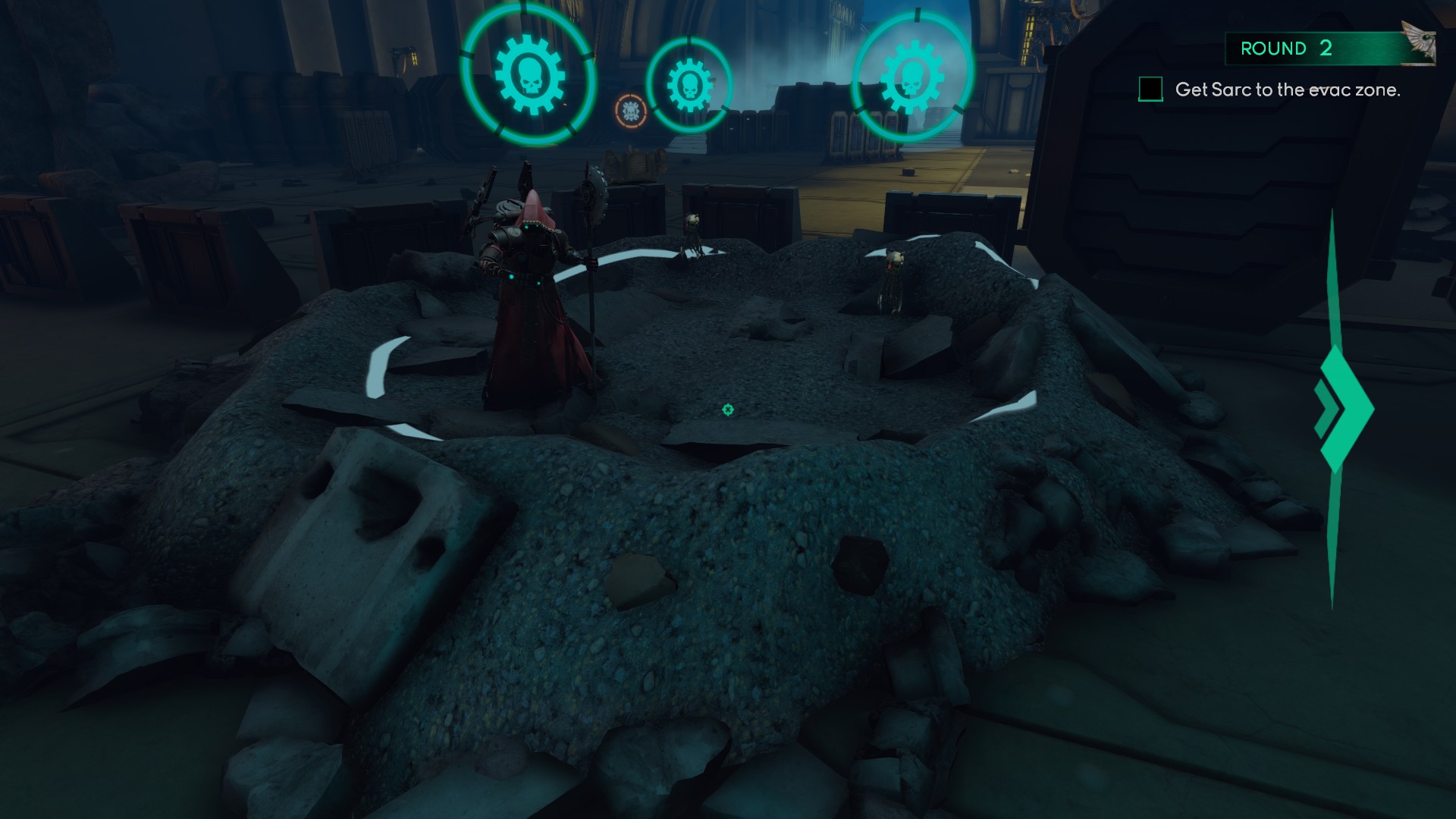 There seems to be no in-mission save facility; if you need to quit because real life interrupts then you can only choose to restart at the beginning of any mission you’ve reached. This doesn’t really matter so far, but if the developers add more varied and lengthy missions then it will be annoying. The extremely slow pace of the game may make this an absolute necessity, though; even when only your troops remain to act in a round the game still forces the strict turn progression and goes through all of the animations and sound effects, making repositioning troops annoying and slow.

Army creation is sort of fun, but given the limited scope of the source material, there’s only a fairly small selection of troops and equipment. As with the in-game interface, the army builder UI needs to provide much more key information; at the moment it’s very limited. As an example, the tutorial tells you that flamers add to assault and not to ranged attacks (shooting), but nowhere in the army builder does it mention that. 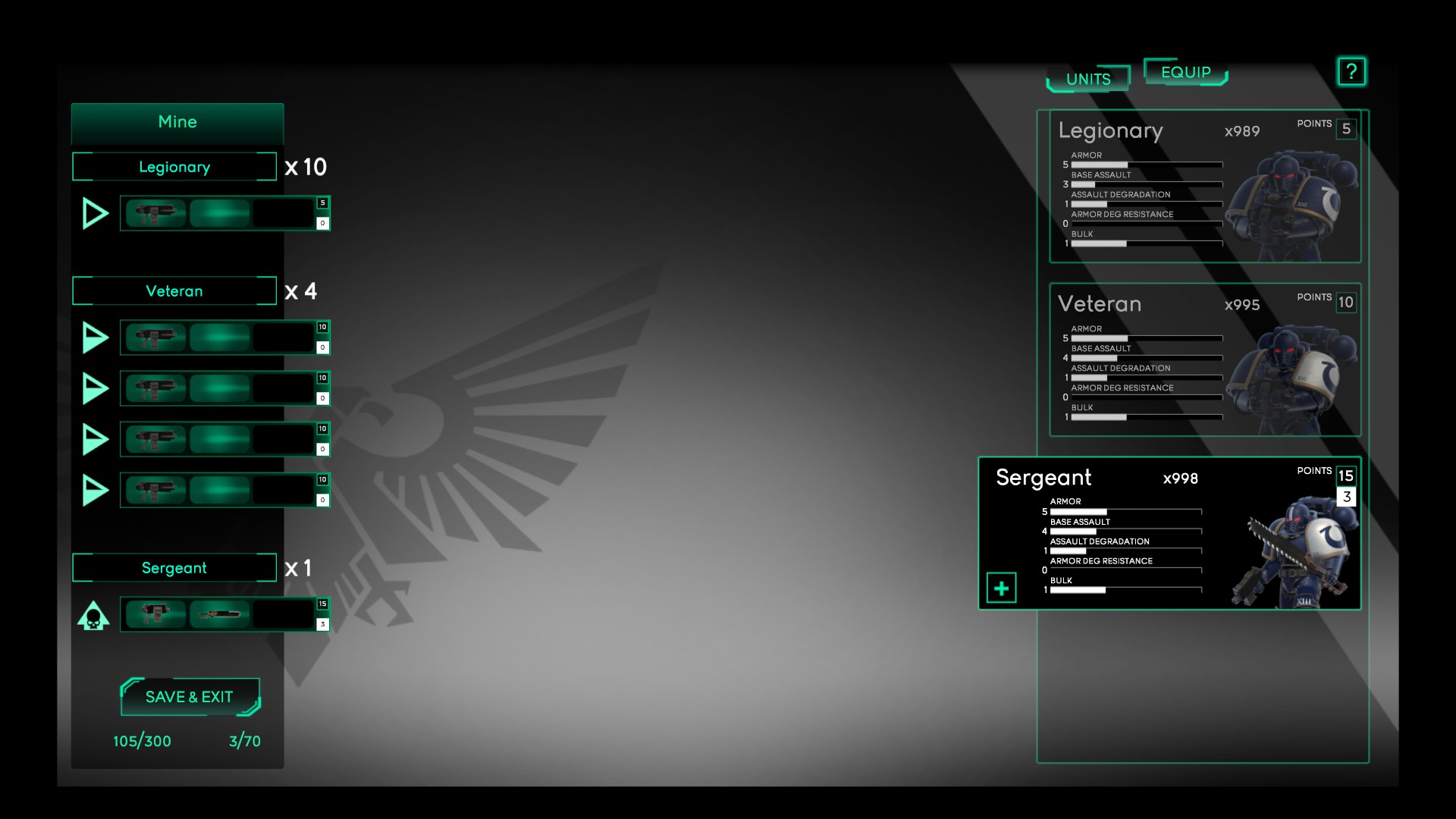 I haven’t encountered any bugs other than graphics and sound issues mentioned earlier. There are some grammar errors in the subtitles and other text, which could do with an editing pass.

Some Early Access games really make it hard to decide whether to recommend them or not, and The Horus Heresy: Betrayal at Calth is one such game. While the gameplay is moderately entertaining and the idea of creating armies of space marines and deploying them in fights against random Steam players is fun, the game is currently lacking in many ways, and doesn’t yet offer an experience that I think is worthwhile. It should improve with time, and may do so enough to make me reconsider my recommendation, but I can only review what’s available now: a solid foundation, but not yet worth your money.