From a quick glance Blasted Road Terror looks like a Convoy clone, but it’s not really. Like Convoy, though, it is a rather fun post-apocalyptic jaunt.

In Blasted Road Terror you take control of a small convoy of armed vehicles that is tasked with patrolling an area of ghoul-infested wasteland. Exactly how you ended up here, the cause of the wasteland, and the reason for the ghouls is not explained at all, but the game is still in Early Access, so that may all be coming. Even if it’s not, you’re given enough information to know that you’re the good guys, and the ghouls, raiders, and other human scum are the bad guys. And that’s all that really matters, right!?

At first glance the graphics in Blasted Road Terror don’t look that impressive; they have a fairly zoomed-out top-down pixel-graphic look. But the more you pay attention the more you see. Each vehicle and weapon turret or rider looks different, each upgrade looks different, and they’re all animated well, too. There are weather effects and various obstructions when you’re out on missions, and the guys walking around the base are well done too. I’m actually very impressed. 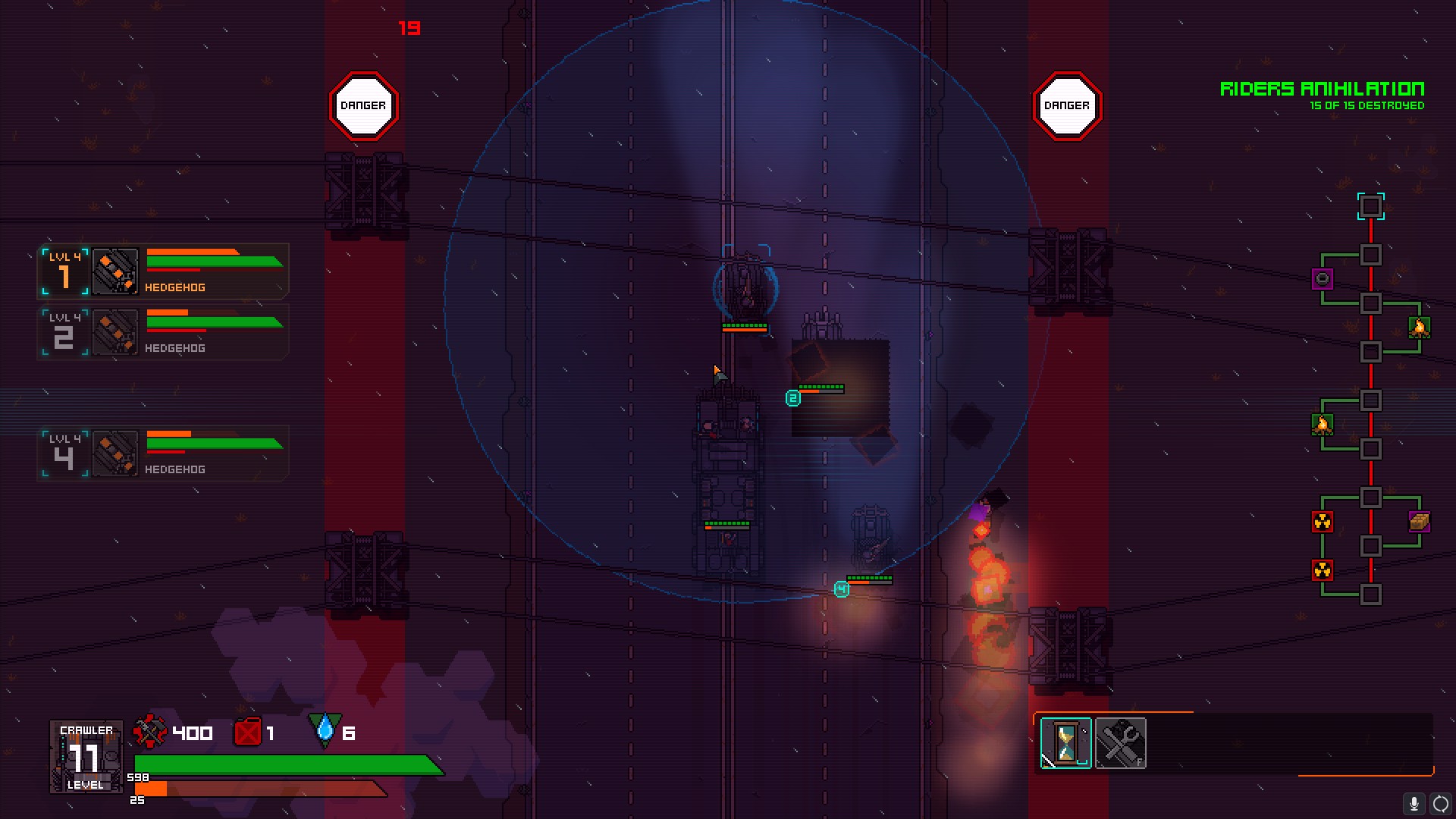 There are some cool weapon effects, together with great flames and smoke from damage — though the explosions look a bit weird, with strange box-like extents — as well as different times of day, with some reasonably good-looking headlights, yet they’re not true dynamic lights. As your main vehicle gains abilities through leveling up it changes and starts to look pretty bad-ass, and the different secondary vehicles you can acquire change as you progress through the game, too. Though they all have the same sort of feel to them, they’re all unique and add to the game.

There’s an opening cut scene, which is very basic, but sets the scene well enough. The grammar is absolutely terrible, though; both here and in various in-game texts. The game could really use a pass from a professional editor. 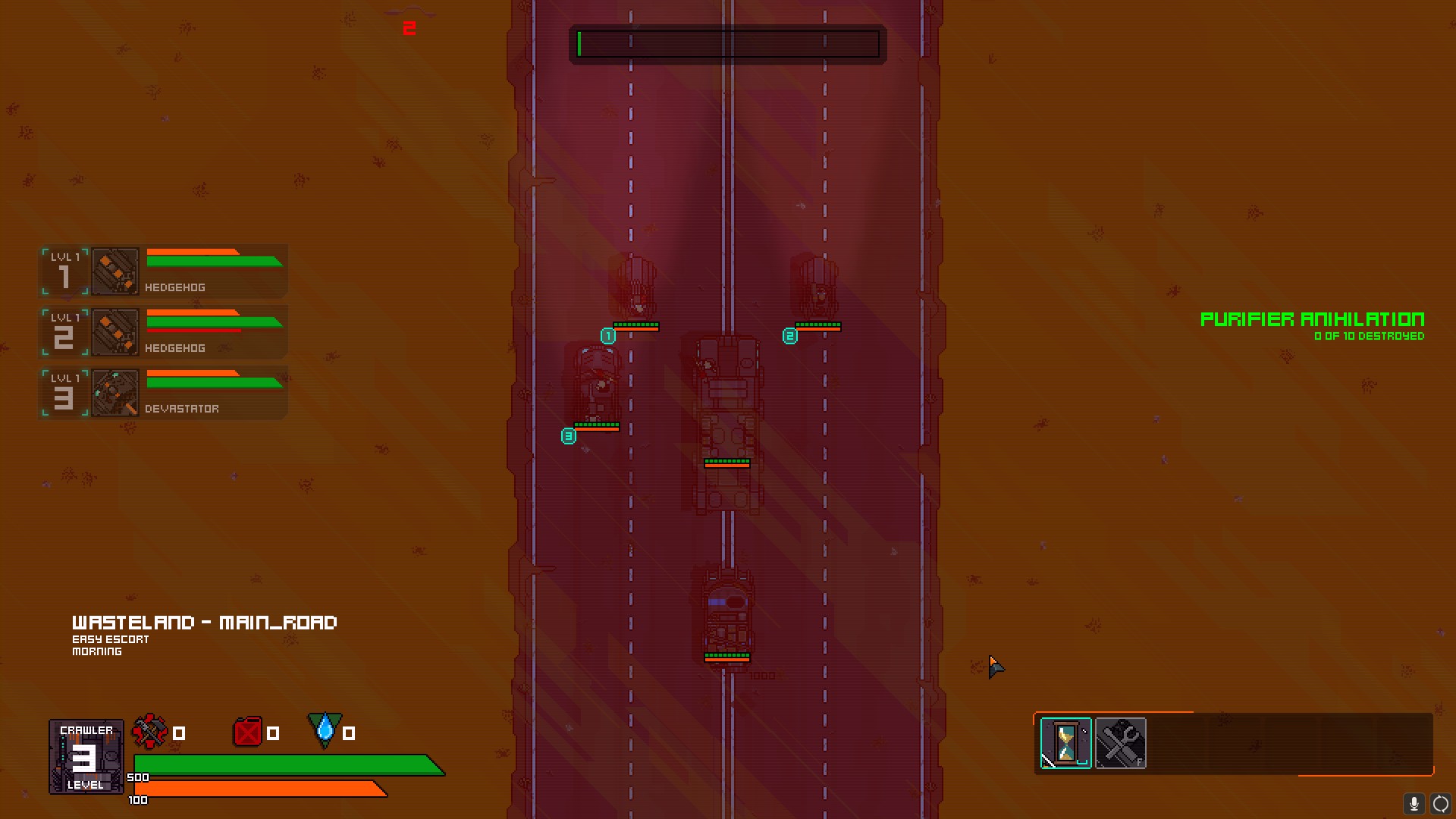 The soundtrack includes a number of different tracks, including some aggressive, drum-heavy beats as well as some really rather nice mellow, minimalist sounds when you’re back in your base in The Valley. Sound effects are fine; nothing too exciting, but nothing too awful, either. A little bit more ‘oomph!’ in the explosions wouldn’t go astray. There are some voices, but they’re limited to unit confirmations, similar to an RTS game. They’re reasonably well done; I didn’t find any of them annoying enough to turn off.

There are no options whatsoever, but the sounds and music are well balanced and I didn’t see any graphical slowdown, even with multiple explosions on screen. It’s a bit disappointing that you can’t turn off the music independently to the sound effects; though I quite liked the music, it’s always good to be able to select your own soundtrack. 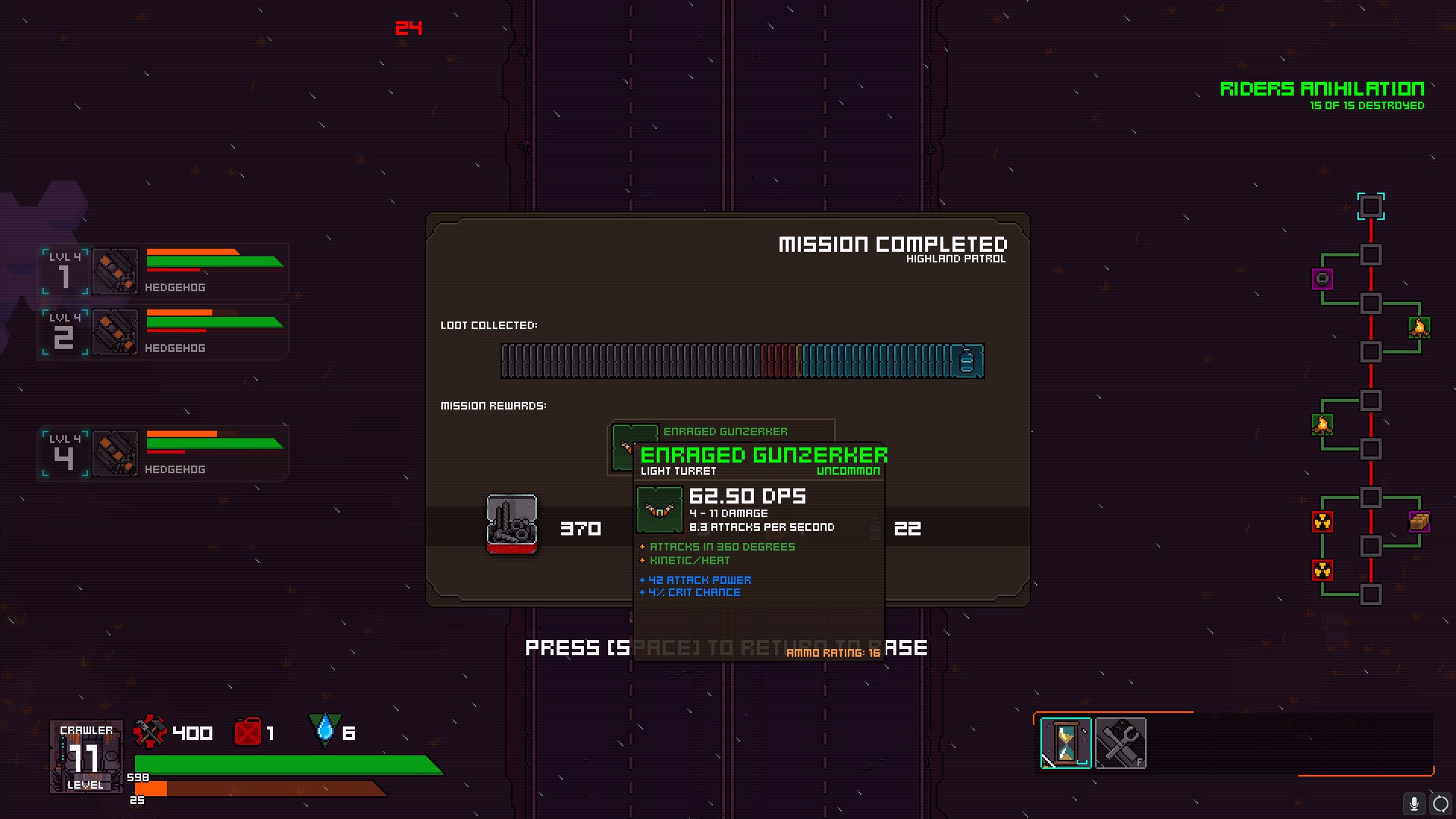 After the short introductory cut scene, the game proper begins with a battle. These are real time with no tactical pause. You can pause the game, but you can’t actually interact with the game while it’s paused so it’s only useful for when real life intrudes. This can make the game frustrating on occasion, but when you stop thinking how it could be ‘better’ and instead focus on how to deal with your enemies, you’ll realize that it’s all part of the challenge, and it’s all good fun.

Each combat shows your main vehicle — your ‘MCV’ — in the center, with up to four supporting vehicles positioned around it. You can scroll the screen forward or backward a little and you can move the MCV directly (and very slowly) to the left or right of its default path in the middle of the road. Support vehicles are more interactive and are controlled like units in a typical RTS: left click to select and right click to move or attack. Each vehicle has an attack arc that depends on its equipped weapon and abilities. A typical combat involves a set number of enemy vehicles entering the screen from random directions and you positioning your support vehicles to take them out as efficiently as possible. 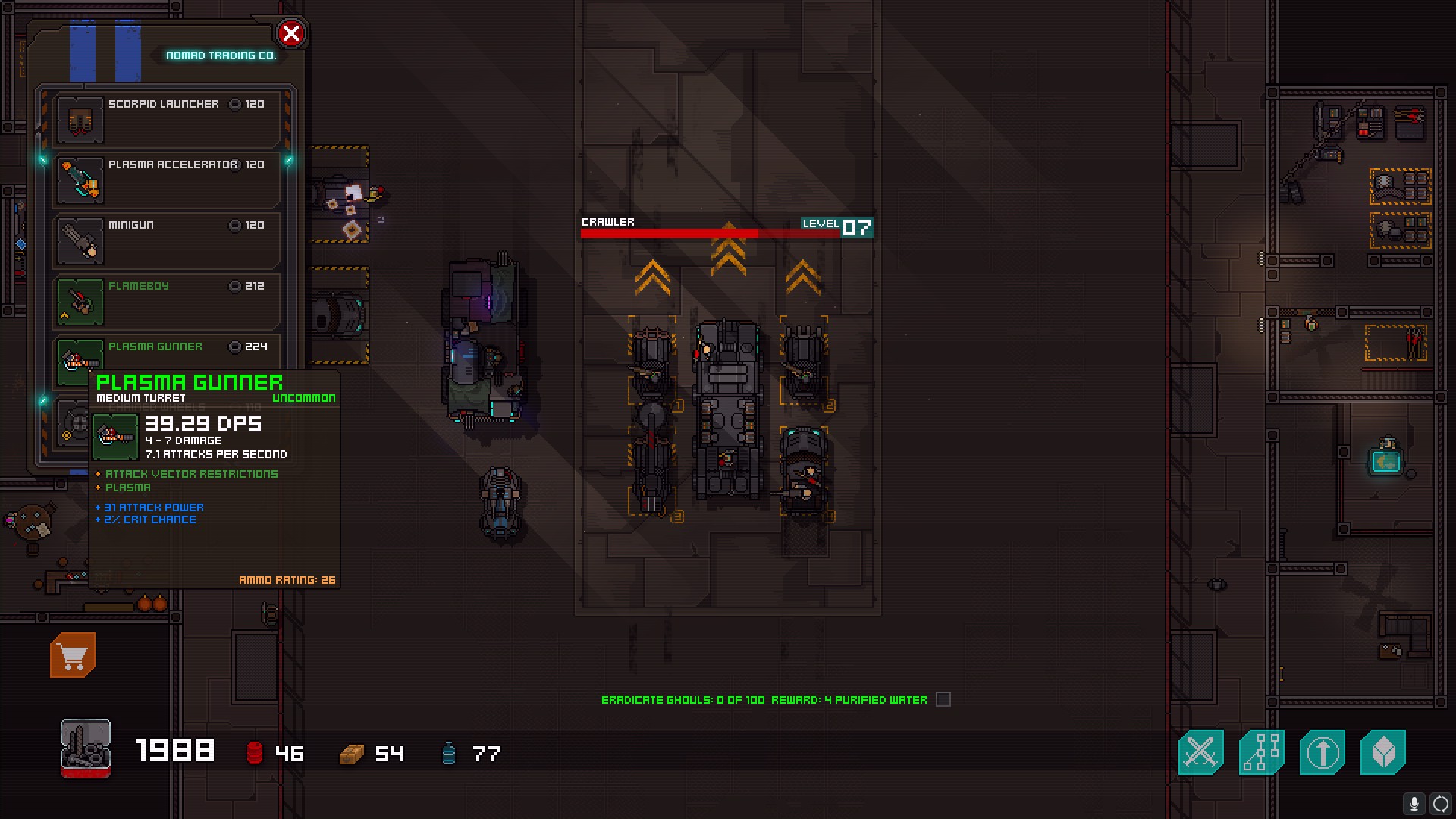 Each vehicle has hit points, armor, and ‘fury’, which acts as a shield. There are many different weapon types, which affect each of these values differently, but the basic idea is to reduce the enemy’s hit points to zero as quickly as possible while maintaining those of your own vehicles.

Once combat is finished it’s off to your safe zone in The Valley. Here you can repair or buy vehicles, weapons, accessories, and upgrades; hire expendable ‘hero’ vehicles; take on missions; level up your MCV; deal with the three factions in the game; manage your vehicle inventories; and more. The base can be upgraded, too, with resources earned by completing missions, and there’s a trade-off between progressing in the game and grinding to gain levels, upgrades, and resources. I’m not sure if there are plans to expand to multiple safe zones or if you’ll always be in The Valley. 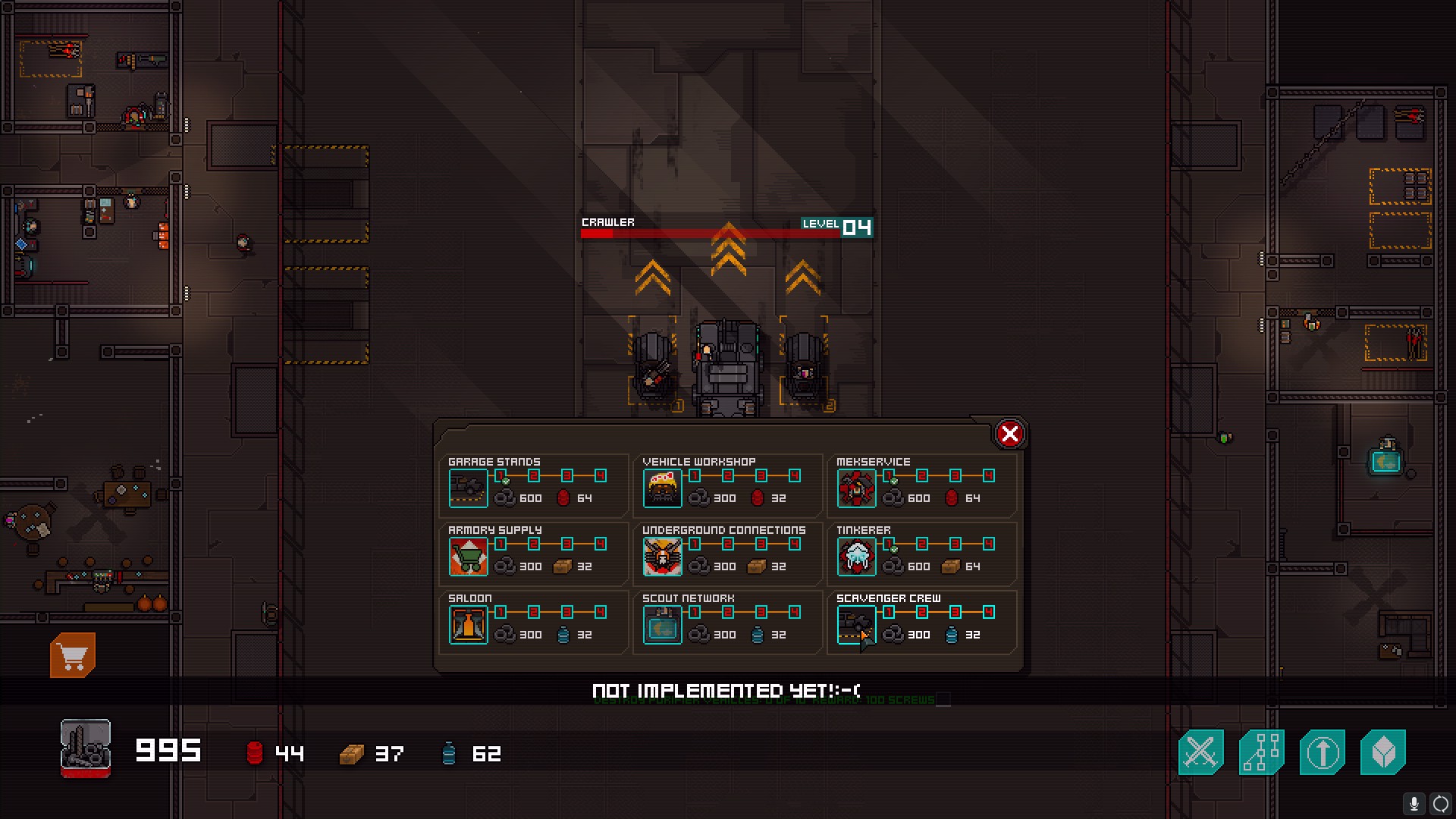 There are a handful of different mission types, with more becoming available as you advance through the game. You can’t always tell whether you’ll be able to handle a mission until you try, but as long as you don’t overstretch you can always buy replacement vehicles and weapons should the worst occur and not everyone makes it back alive. The game has some rogue-like elements, with random ‘loot’ and vehicles available each day and a sort of procedural generation at work in the levels, particularly in patrols. I hope further development plans include more of everything, though, because it does become a bit grindy. 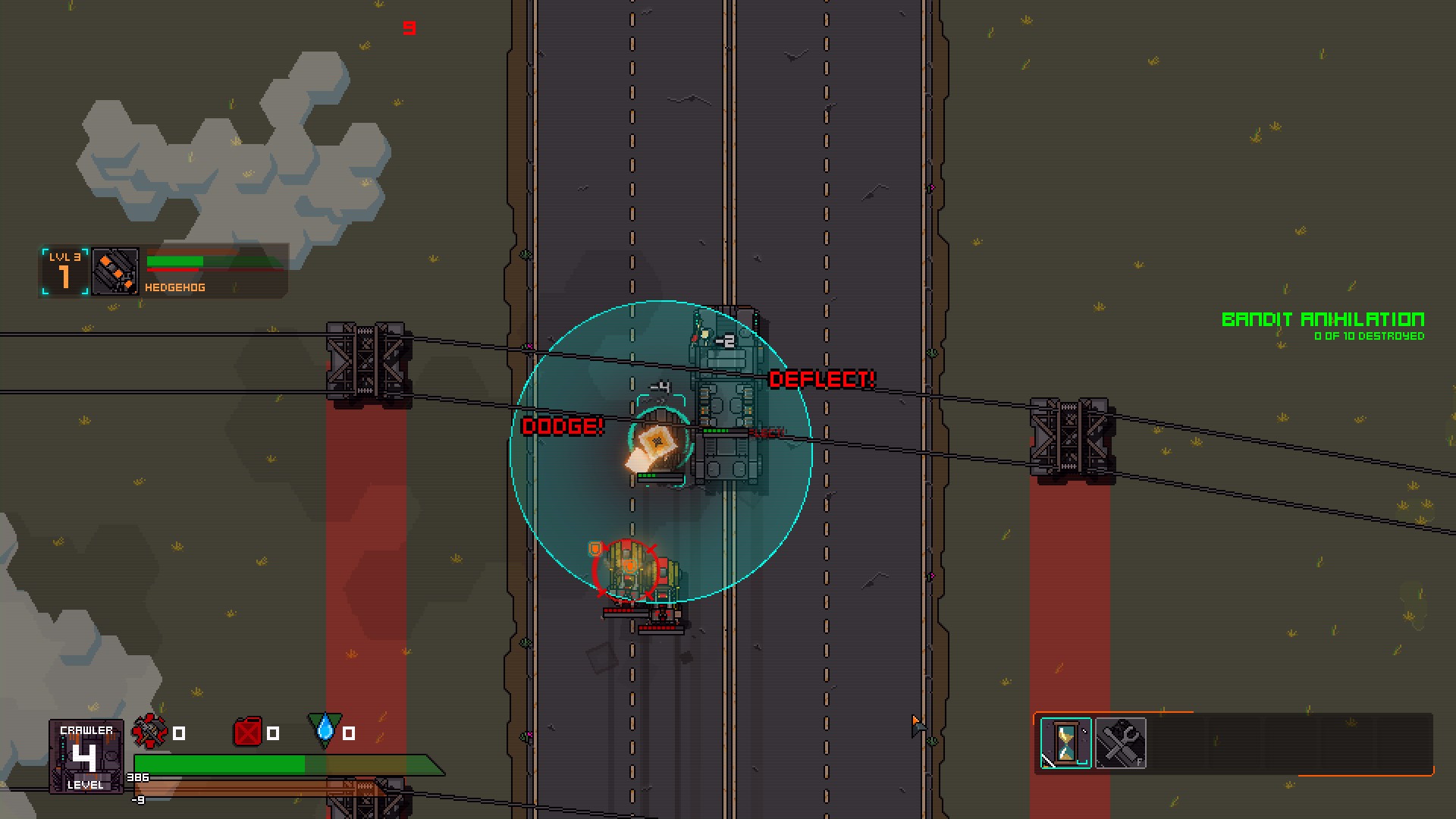 The game is still in Early Access and it does feel rough around the edges, but the core of the game is solid and with ongoing work and expansion of some of the ‘placeholder’ type elements, it should be even better. There are some negatives, but I think many of these will be addressed with time.

The grammar is terrible throughout. Weapon and item bonuses don’t change the displayed stats for your vehicles; I don’t know if they actually work. You can’t see a weapon’s firing arc until you equip that weapon in the field; a way to view the arc before purchase would be useful. Vehicle pathing could definitely be better; you may have to intervene if obstacles are between your unit and its targeted position. I also did a mission with two NPC support vehicles tagging along, but they didn’t seem to actually do anything; I’m assuming that’s not intended. 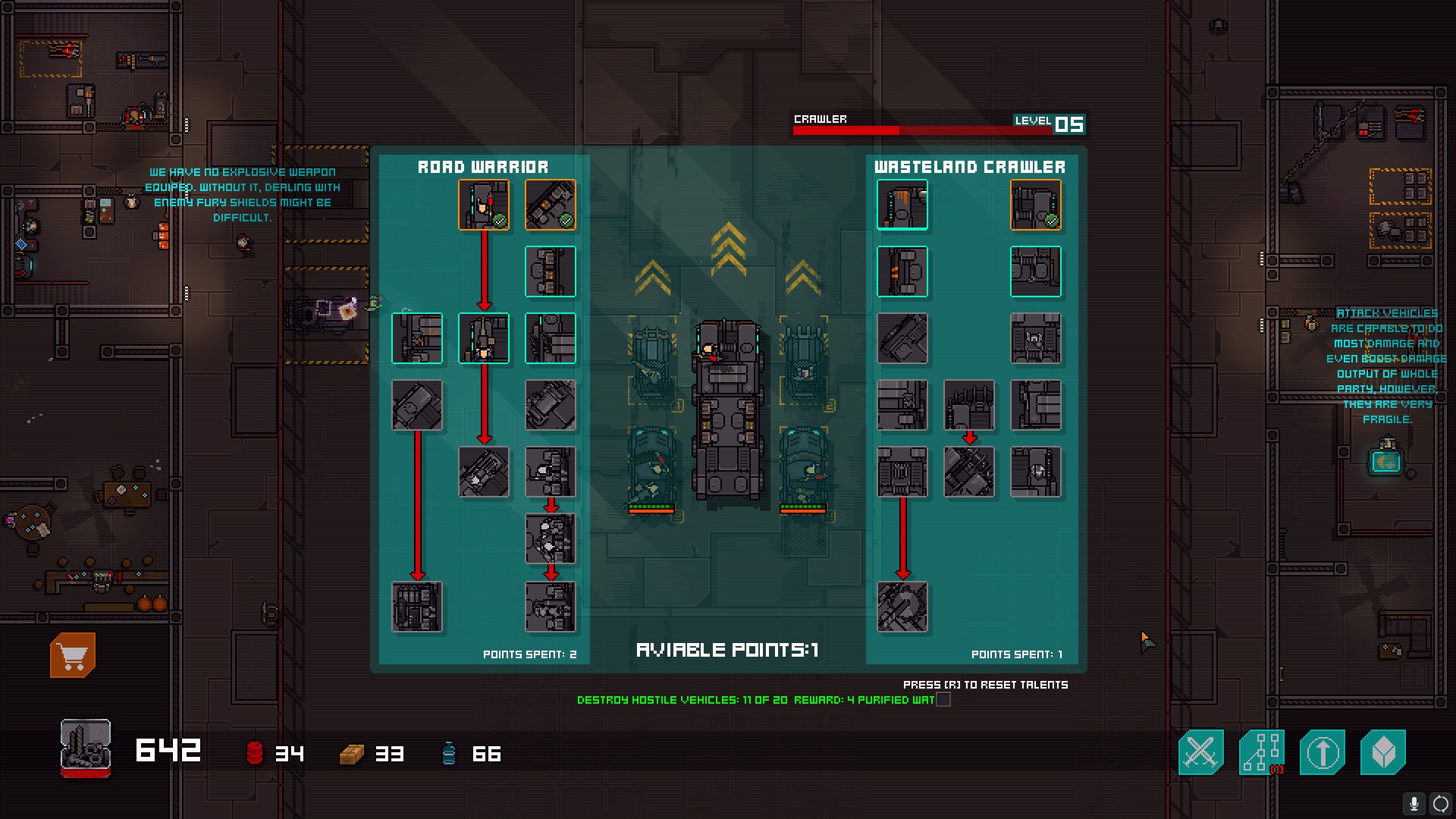 The interface can also be rather confusing, though there is some advice in the very basic tutorial. The game doesn’t give you nearly enough information about vehicle abilities (what does “Kinetic Dmg Mastery” mean, for example?), vehicle classes, or basically any other game component. This makes the learning curve steeper than it should be, but a couple of hours’ play should see you getting the gist of most of it anyway. 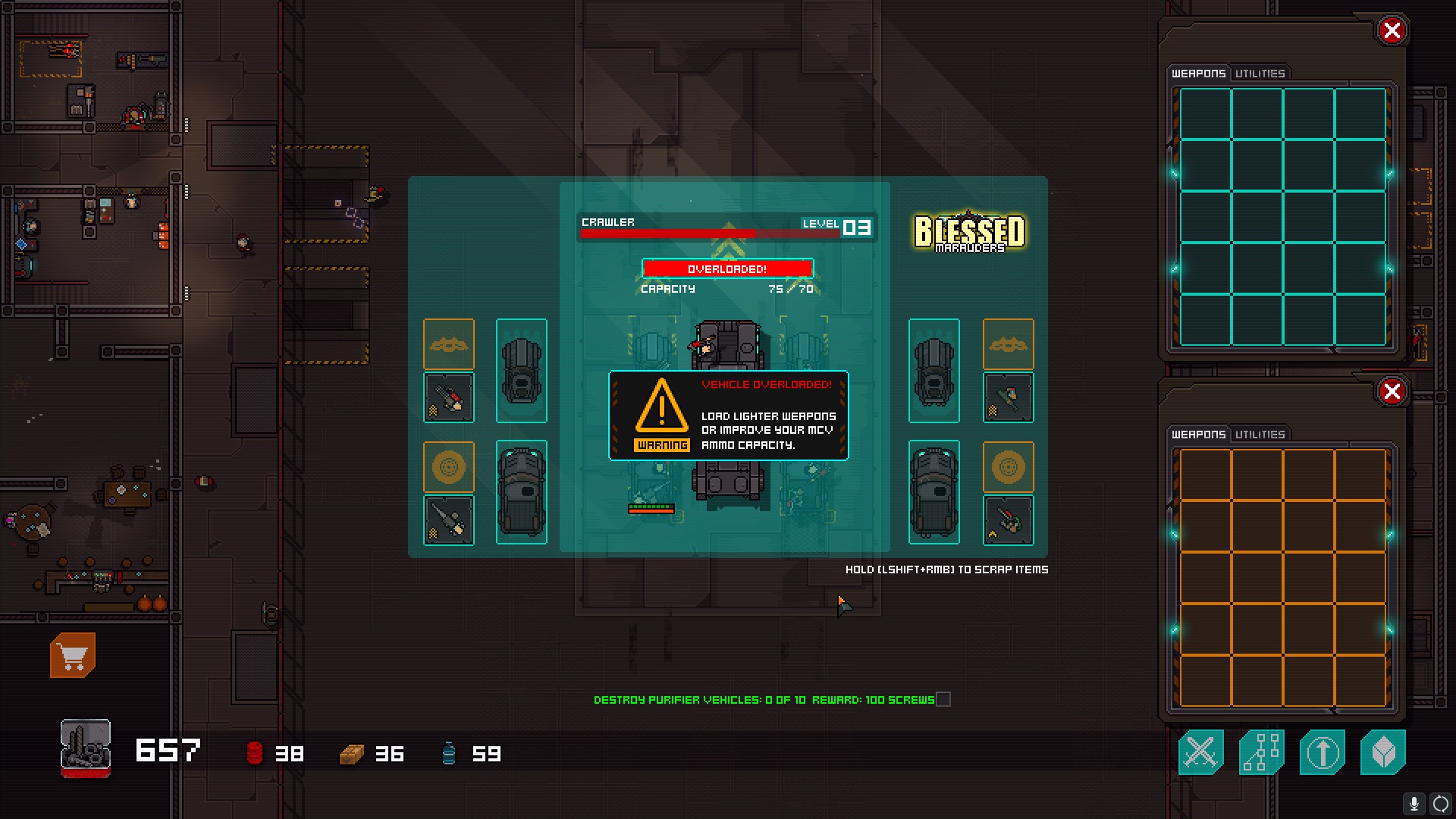 Blasted Road Terror is currently rough around the edges, but the core gameplay is fun and the infrastructure around it — factions, unlockables, vehicle types, weapons, items, quests, etc. — adds plenty of replayability. The game isn’t Convoy, though it shares some elements with it, and that’s a good thing. Some may find the real-time combat frustrating, and it does make for a challenge on occasion, but as long as you manage your resources and don’t overreach, you can recover from even the most crushing defeat.

Blasted Road Terror is a very good game. With a bit more work during EA it should be an excellent one.