The new chapter of Wolfenstein by Machine Games is a solid follow up to the well-received Wolfenstein: TNO. However, the PC version is riddled with technical problems.

Wolfenstein II: The New Colossus is the latest instalment of the “modern” reboot of this series, made by Machine Games and published by Bethesda. The story picks up from where The New Order / Old Blood left off, with Frau Engel always hunting down B.J. Blazkovic to destroy him and put an end to the anti-nazi resistance in the now German-occupied United States of America. As you may remember, the protagonist was left heavily wounded and so now he uses an ancient alien tech based power armour in order to move around and continue the fight… until a more permanent option may be found. The title has the usual distinctive touch of Machine Games, with very good graphics, great attention to details, fantastic gunplay and immersion, along with expanded gameplay features. It might all sound like a vast improvement for the series, but it also comes with some problems, at least on PC. Namely, some major technical difficulties and optimization failures plague the game since it’s ported from consoles. However, let’s get into more detail in our review below.

The gameplay of this latest chapter of Wolfenstein stays true to its tradition, and it is a very good thing, but also is expanded with new mechanics, not too far away from its roots. Basically, there are two standard approaches to the missions, which are set in a semi-open environment that is rather large and full of secrets to find.  The first one is a classic run and gun, guns blazing approach, which will trigger enemy Commander reinforcement requests and give you a lot more enemies to kill. Depending on the type of player you are, this might even be a good thing.  The other approach is stealth, and in this current chapter it has improved a bit, encompassing the gameplay with silent takedowns, alternate routes to avoid and deceive your enemies, silenced weapons, and all this makes the stealth system very pleasant.  The benefit of such a playstyle is not alerting reinforcements, so fewer resources will be spent on killing the backup teams coming if the alarms are sounded. The choice is yours, but be aware stealth is not always applicable!

A new system introduced in The New Colossus is the one concerning passive Perks and Weapon Upgrade Kits. Depending on your playstyle, you will get more kills in one or another way.  For example, a stealth play will get more silent kills, headshot kills, takedown kills and so on, while a guns blazing approach will get more environmental kills, dual wielding kills and heavy weapons kills. Well, all these types of actions and more will count as progress towards the ranks of various passive abilities, such as improved headshot damage, improved heavy weapons magazine, and so on, and will very much reflect the playstyle you are having in their progression. The weapon upgrade system has also improved, with three upgrades for most weapons and unlockables with upgrade kits hidden around levels. These improvements will drastically change the behaviour and the effectiveness of your guns.

Other than this, there are also various side activities and a ton of collectables hidden everywhere for all the completionists out there.  REALLY, there are a lot! There is also a shooting range at your base with two modes, making a nice challenge to test your skills. Enigma Codes are gained from dead enemy commanders and these will unlock precious information about enemy high officer locations, triggering a whole series of secondary optional assassination missions to help the Resistance further weaken the Nazi operations. Overall, The New Colossus is a varied single player FPS with fresh and exciting gameplay.

The combat and gunplay in this title are absolutely top-grade, staying true to the standards set by Machine Games in the two previous chapters of the series. The guns feel different;  solid and weighty with the gunfire towards enemy bodies and metal armours being meaty and vigorous. All of this is seasoned with abundant blood and gore, mutilations, screams of agony and horror, and laser beams of doom disintegrating everyone. The combat is very fast-paced, frenetic, overwhelming, and with enemies that pack a real punch at the highest difficulty. You will die in just a few shots even when at maximum health and armour, so one wrong move and it’s all over.

This is the combat expected from a modern, involved, well made story-driven FPS, focusing on quality more than on quantity. Your satisfaction is guaranteed when you see pieces of bad guys flying left and right in a mayhem of violence. Brilliant.

Everything really depends on the difficulty you choose and how many collectables you want to find. I’d say the game has an average difficulty and if skip collectible finding, doing only all the Assassination missions and the main story, the game time will be around 8-10 hours, if you then want to find all the outrageous number of collectibles (it’s really insane, trust me), do all the secondary missions and play at the highest difficulty (so expect to die a lot more), the game can last very well 15+ hours, but that depends on you.

An average length single player FPS, at worst, an above average one at best.

So, let’s talk about if there’s something overpowered with either the enemies or protagonist. Honestly, there really is nothing that had me screaming colourful words saying it’s ridiculous.  Some weapons are really strong if used right, and some enemies will kick your ass if you aren’t prepared, but no, there are no major issues in balancing that I am aware of.  Maybe, just maybe, the Laser Beam Heavy Weapon is a little OP since it vaporizes anyone to kingdom come, but not to the point of being an auto-win, definitely no.

Also, the highest difficulty, Mein Liebe, is completely insane since two bullets will kill you period and that is unlocked only when you complete the game once, but that is a difficulty made on purpose to be ridiculously unfair so that is not a real issue.

Here, it depends on the selected difficulty, it really does.  The second highest, Death Incarnate, is VERY challenging and you can see it in my video above, even a seasoned gamer like myself struggled a lot with it.  How I managed not to die there is a miracle, but in some other areas, I died repeatedly. The game is as challenging as it should be, on average/high difficulty, but is never unfair. 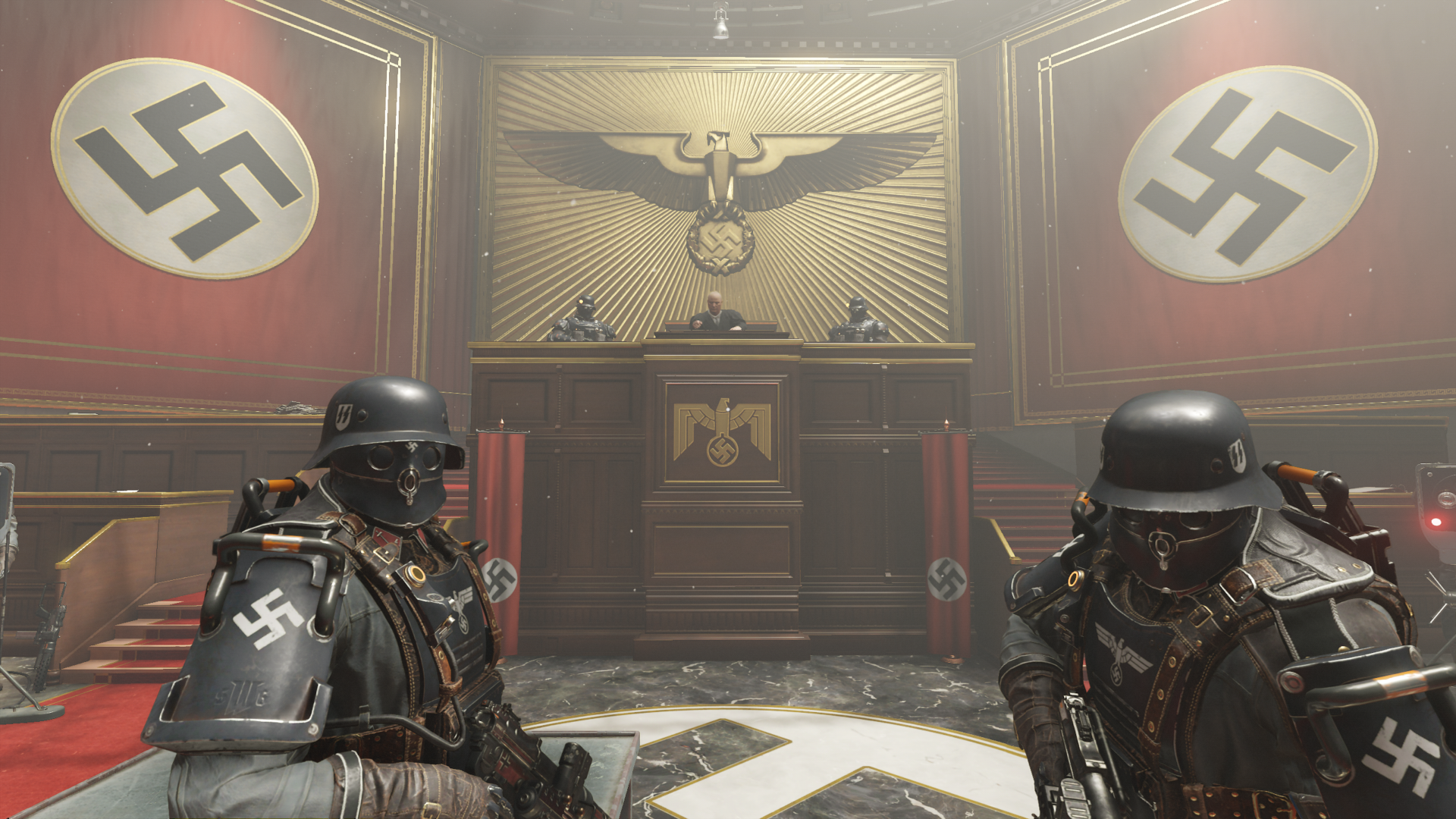 Overall, the graphics in this title are very good with particles, physics, dismemberments, and models. All of it is top-quality and feels like the best the gaming industry can possibly make as of 2017 without a doubt. Machine Games confirms again to be a very capable developer from a graphical standpoint. There is a slight inconsistency in the quality of material textures, the ones of metals, paints, mechanical parts, weapons, are all of astonishing quality, while others of more organic nature, like skin textures, character textures, tissues, wooden objects are of slightly lesser quality and it is noticeable up close. Apart from some inconsistency in textures, and also the mediocre quality of water, which honestly surprised me, there are no other noticeable flaws in an otherwise spot-on graphical makeup.

The sound design is very good with a soundtrack which reminds me of the old Wolfenstein ones, but modernized and mixed amazingly. Gun sounds, mechanical sounds, enemy chatter, voice acting, all of it is of a good to very good quality.   The ambience really gives you a feeling of immersion as it helps create a very vivid scene be it the narration or the middle of battle. Some may prefer to turn OFF the music for increased immersion/realism, but I didn’t but it can be an interesting choice.

The optimization, having been ported from the console version (yeah I know right, we all are thinking the same thing right now), is not very good. Granted, on very high-end hardware it will run mostly well all the time, but even on my test PC with a 1080 and an i7, the game managed to drop to very low framerates occasionally.  On one specifically, it managed to get down to 10 FPS for a whole 5 minutes during a fight, which REALLY gave me a hard time.

In regards to performance, there are a large amount issues to address.  I hope future updates will better the situation and in that case, we will keep you updated.

This game will currently crash 75% of the time you alt-tab or lose focus from it. It is an issue still unsolved and the post day one patch did not address it properly, this is the only stability issue, and is pretty bad. No other issues of this type are to be reported.

Wolfenstein 2’s enemy Ai is honestly not too brilliant but will hold its own in a fight, seeking cover, using grenades frequently and in some cases attacking from various sides simultaneously to bring you down. I’d set the bar at Average for the enemy AI, it’s not the Arma 3 AI, granted, but it’s decent anyway.

I was surprised to see that even if this is a console port, the controls and menus are done well enough to fit PC users without significant problems.

Here comes the reason I did not give it a higher rating than a “Save For Later” to this title, and I really wanted to.

To run this game properly I had to spend hours between graphical settings, the Nvidia control panel, the Nvidia driver editors (Nvidia Inspector), and try endless settings, presets, and a whole lot of technical shenanigans just to avoid the terrible technical issues this game has and make it playable. Without all this technical work from me, the game would have had terrible tearing problems, a big black band in the middle of the display during cutscenes, severe distortion of images, graphical glitches, random crashes, stuttering …it was a real nightmare.

The fact is, problems like these are absent on Console but are there on PC.  This is, technically speaking, a terrible port, because of the issues derived from it. If this gets solved by the developers and NOT by poor sods like us having to fiddle through drivers and whatnot for hours to get the game running, then it will, by all means, get a better score, but for now keep these problems in mind if you want to buy it. 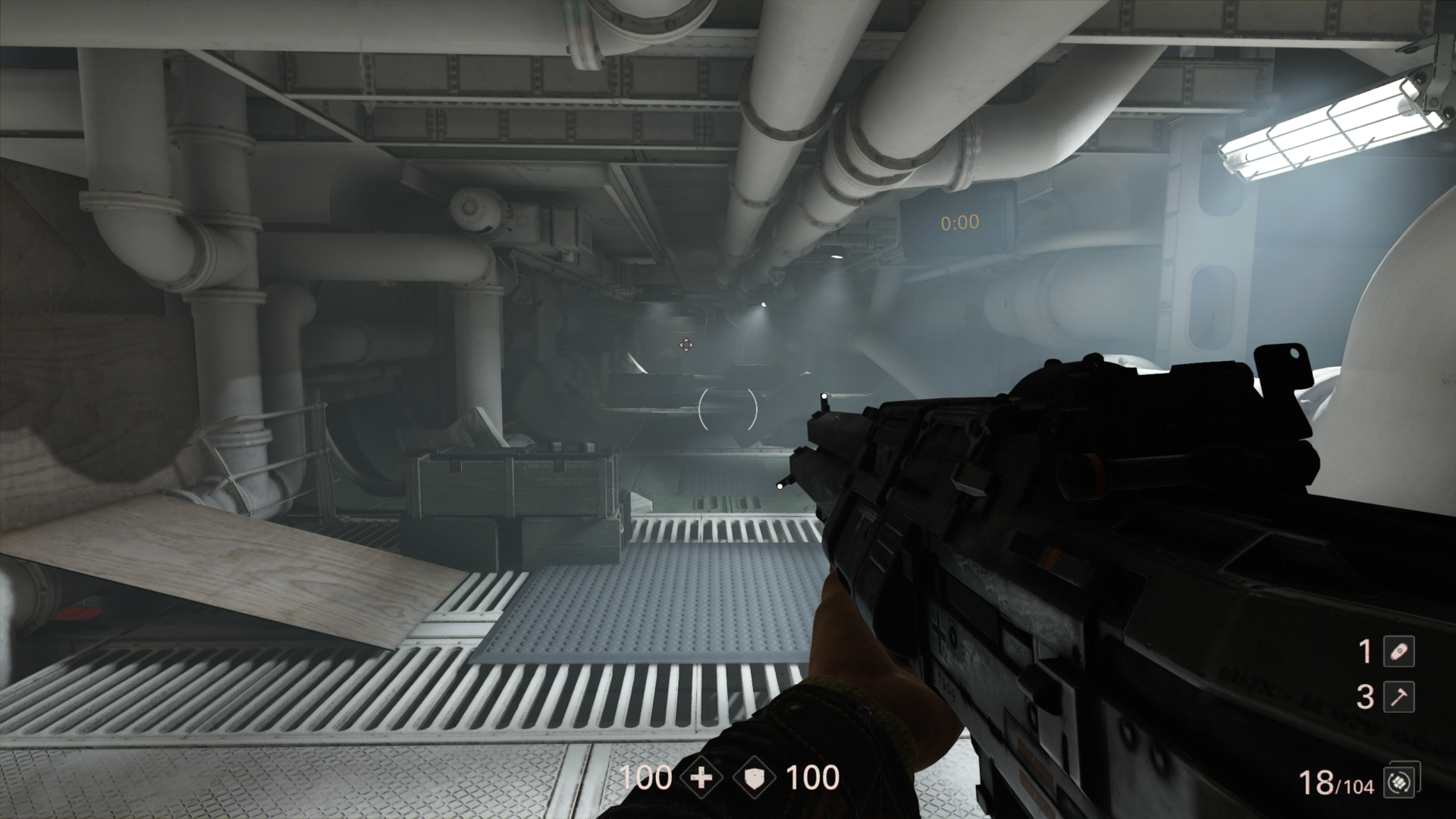