Space Pirates and Zombies 2 is a galactic extravaganza of light and sound, brought to you by the wonders of Rez.

SPAZ2 is set after a zombie apocalypse on a galactic scale, with the remnants of Humanity left trying to fend for themselves after a malevolent being, the Dark Entity, was destroyed.

To briefly summarize the game world’s history, Humanity discovered a new element, Rez, which allowed cool stuff such as interstellar travel. Humanity expanded rapidly, eventually encountering the Dark Entity and its weird biotech infection that turned humans into cyber zombies (not unlike the plague from Alastair Reynolds’s Revelation Space). Things looked bleak for humanity until a heroic crew of space pirates managed to destroy the Dark Entity, saving the galaxy, but removing Humanity’s only reliable source of Rez.

Now, with the warp gate network destroyed and the dwindling supplies of Rez used to fuel portable jump drives, Humanity is once again its own worst enemy. Starship captains fight each other, preying on the weak and stealing what they can.

Into this setting you are thrown: a crew member on a ship made of junk parts and flown by the galactic heroes: Captain Elsa, Dr. Carl, ex-Admiral Jamison, and Mackenzie, the ship’s dog … er, engineer. Not convinced that you have seen the last of the Dark Entity, you search the galaxy for the infection.

SPAZ2 has AAA-level production values; the graphics and sound are both superb. 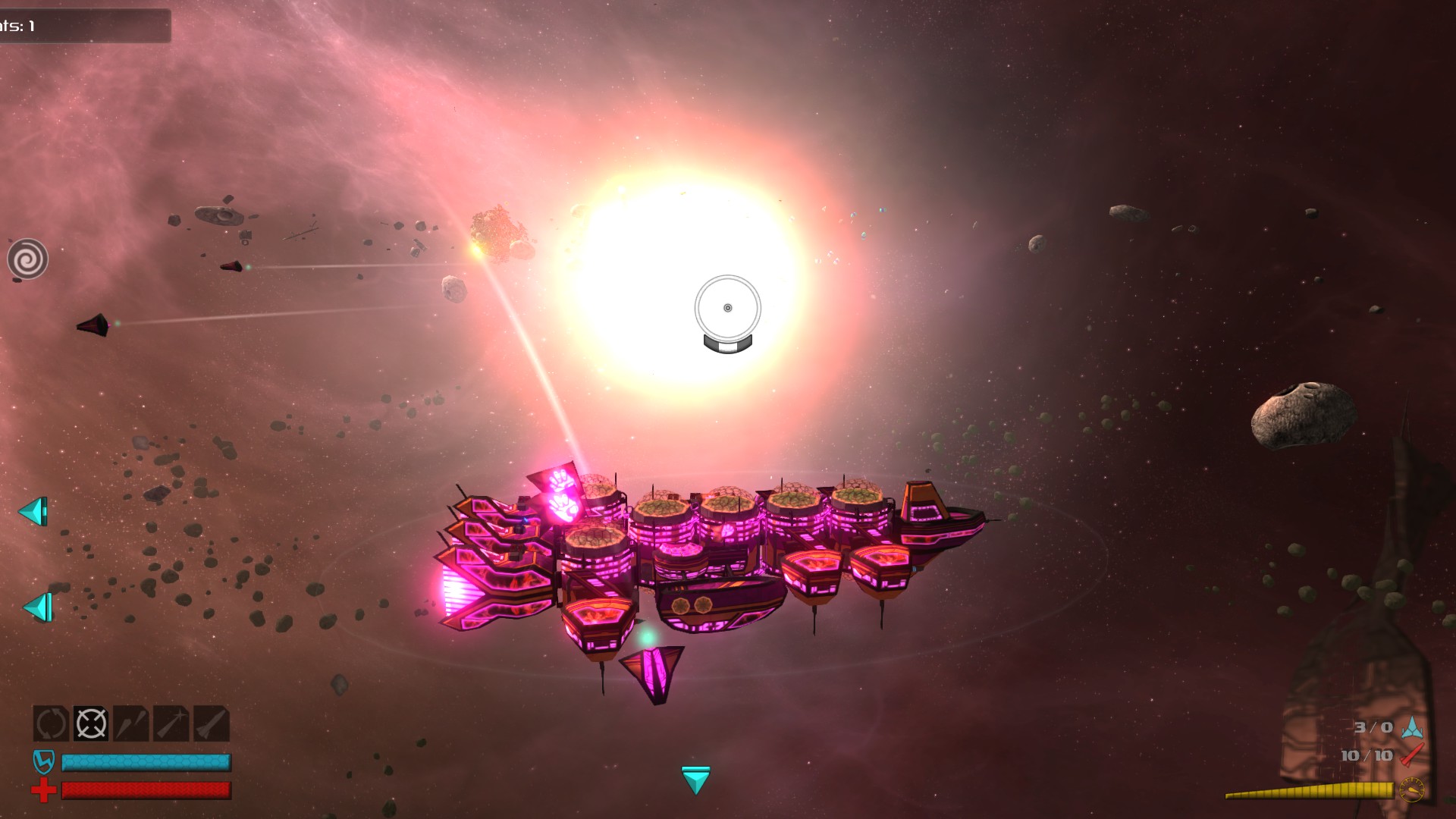 The tactical map graphics are clean and precise, with little animations giving life to what might otherwise have started to look rather bland as you stare at it for hours on end, while the 3D combat graphics are very nice indeed, with each of the different ship modules looking distinctive and weapon effects creating big, bold, and colourful displays of awesome power. Multi-combatant battles are even more impressive, with a handful of motherships all maneuvering around space detritus for position and unleashing death while their fighter escorts dart around them, smaller guns blazing. The interface is polished and easy to use for the most part, too. 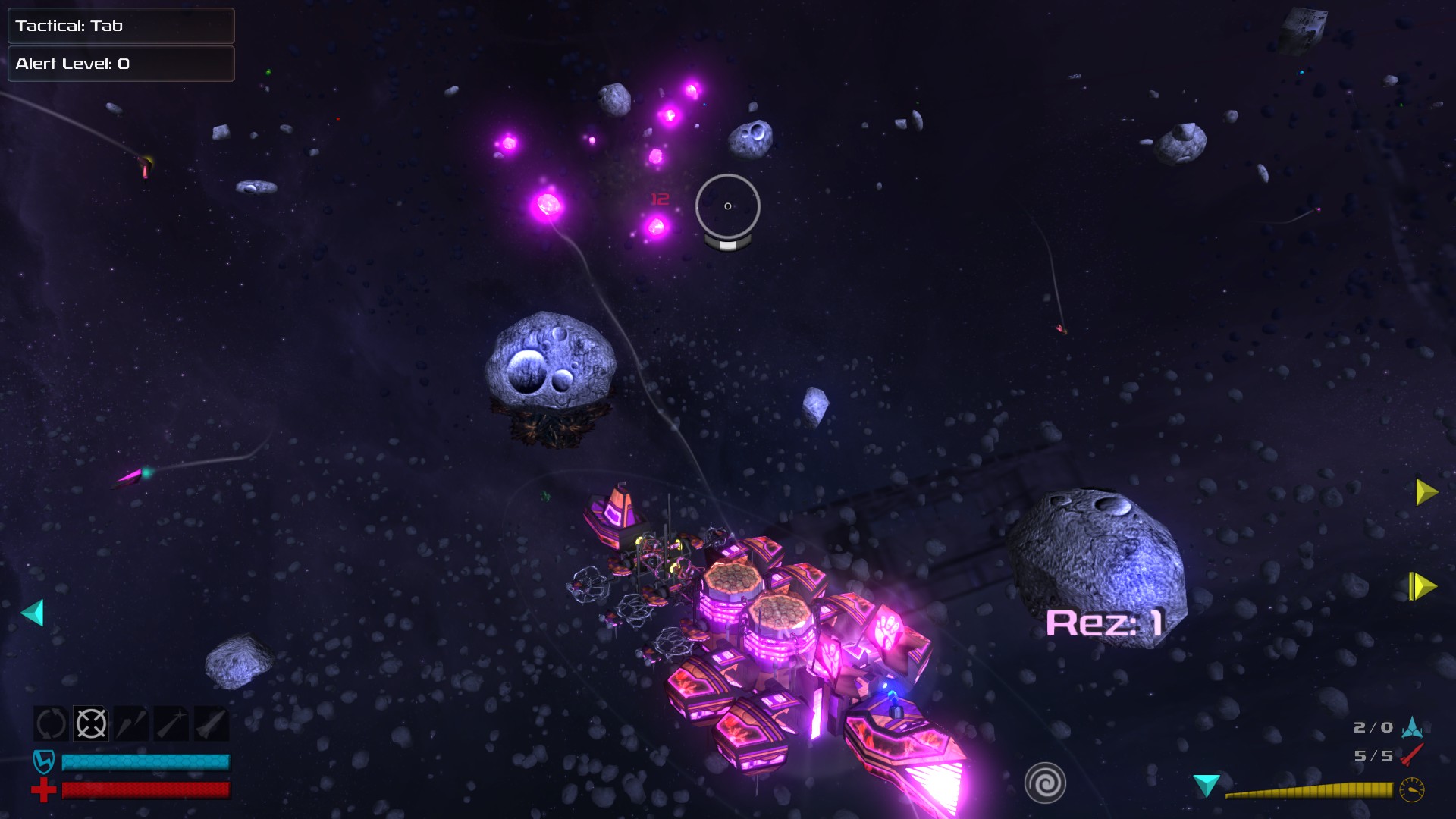 Sound effects suit the game to a tee, with interface bleeps and bloops, and weapon and ship sounds all fitting together perfectly. The music is typical for the genre: dramatic orchestral pieces reminiscent of Star Wars and countless other space operas. Both are very well produced.

The voice acting is exceptional; the professional actors do a sterling job. Carl (Matt Berry?) in particular is fantastic, though one of the other’s accents is questionable. The actors really get into character well and the script is hilarious, with very few grammar errors. The developers have also kept the Early Access placeholder voices as an option, some of which are also rather good, in a different way. 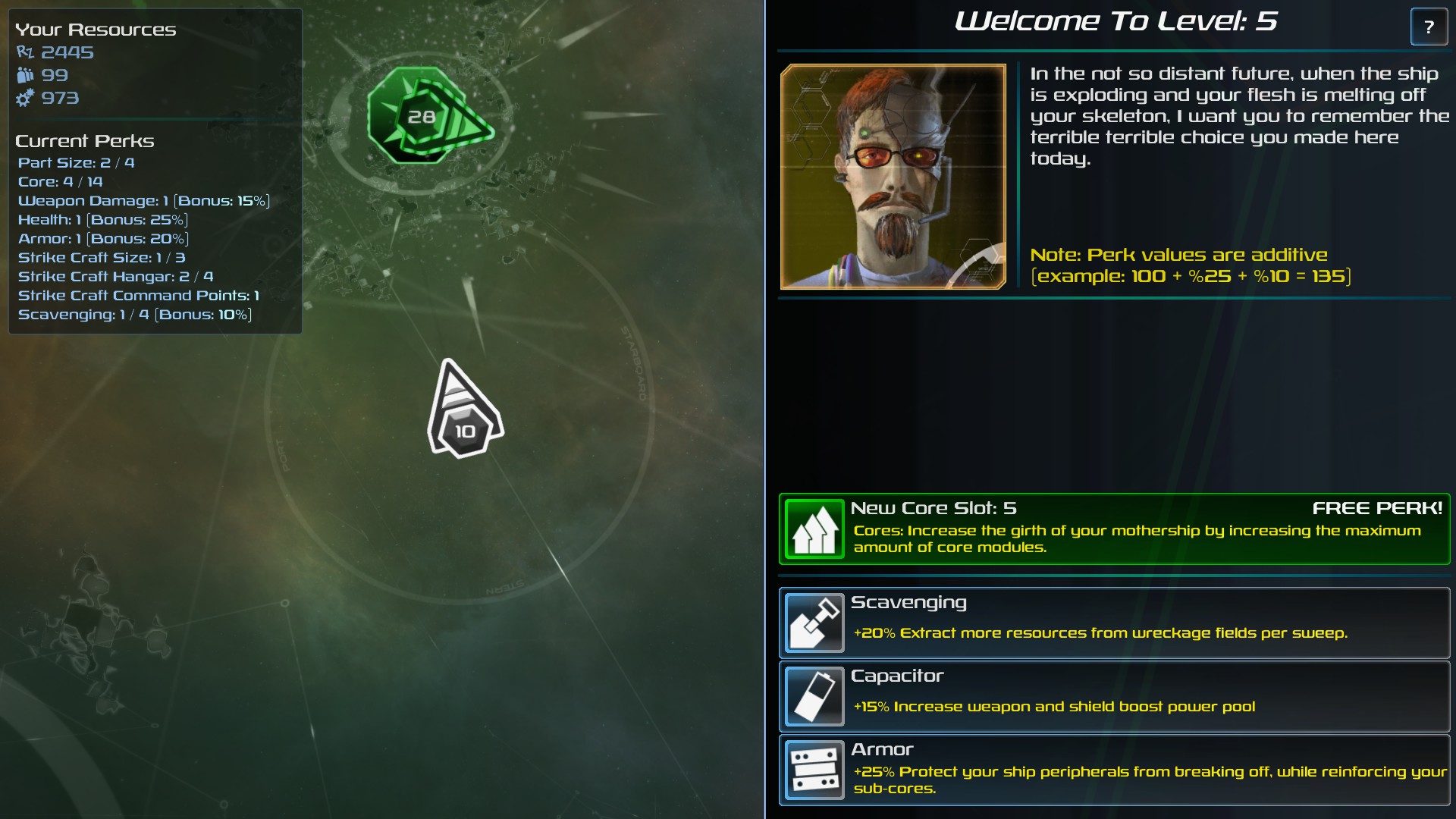 There are plenty of graphics and sound options to adjust the performance to suit your PC and the volume levels to your liking. I didn’t encounter any stuttering or weird effects, even when the screen was absolutely full of explosions and glowing particles of imminent death.

At a high level, the game is split into two modes: tactical management and real-time combat. If my experience is anything to go by you’ll spend most of your time in the tactical mode, dropping into combat when your plans require it or you get bored and want a bit of action. 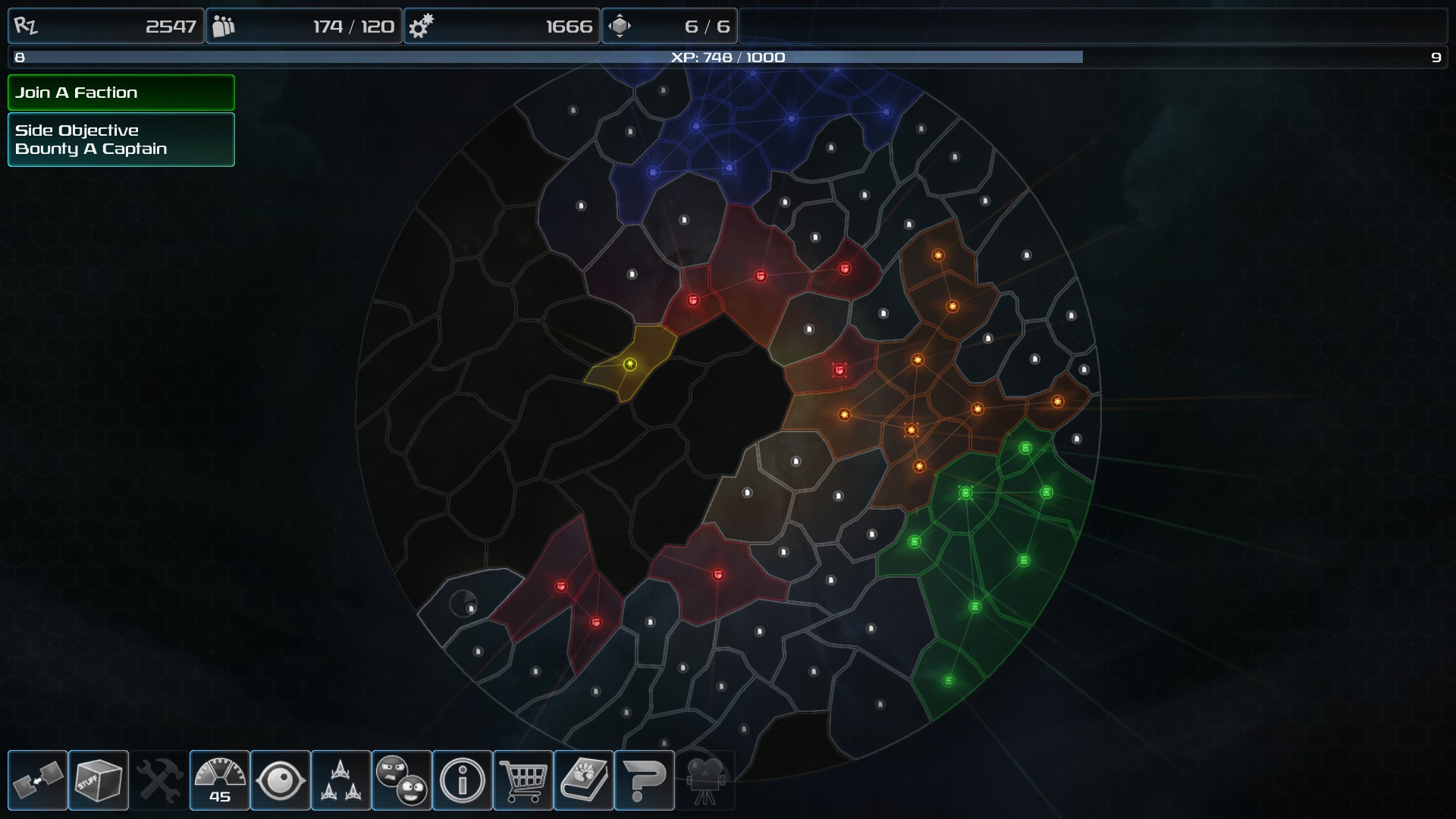 The tactical mode gives you all sorts of management-style UI icons around the screen edges, overlaid on a big map of the procedurally generated galaxy. From here you control your starship, moving about the galaxy and encountering other vessels, starbases, and various resource-based nodes, both one-off and endlessly recycling supplies of scrap (currency), grunts (ship maintenance), and the valuable Rez. The game is effectively paused when your ship is not moving, allowing you time to manage everything without risk of interference: trade with bases and other captains, modify or completely rebuild your ship, build new short-range fighters, engage in space-pirate-style diplomacy, or just view the plethora of information available on the game world and its inhabitants. 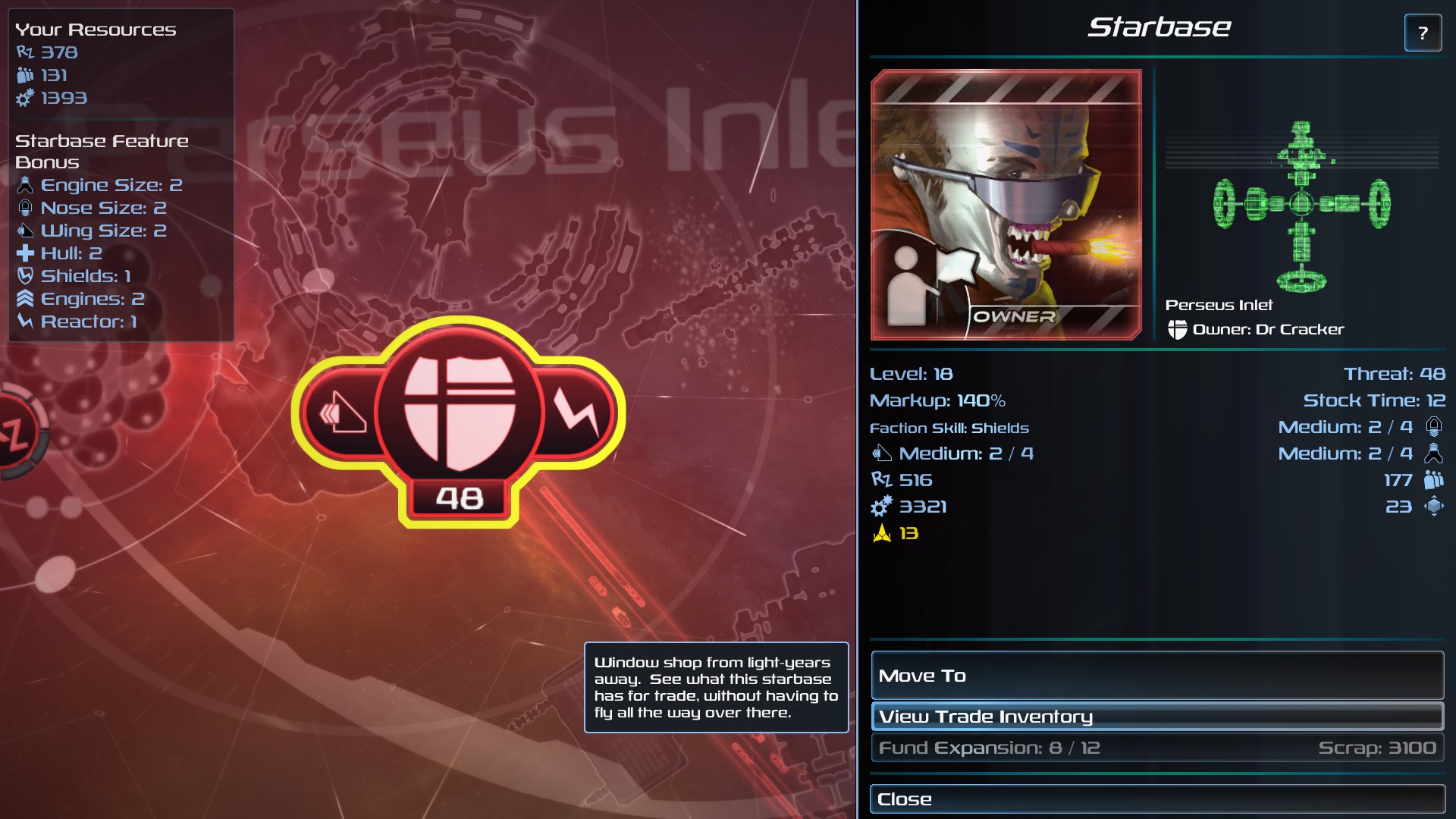 In contrast, combat mode is all frantic action from the get-go. Initially I found the battles a bit confusing; combat in space should allow movement in three dimensions, surely? Instead, SPAZ2 combat is played on a two-dimensional plane. You can accelerate or decelerate forward, reverse (why isn’t this the same key as brake?), and turn left and right. In keeping with the pirate theme, it plays more like water-based ship-to-ship combat than anything in space. But after a bit of familiarising myself and allowing some concession to the game’s top-down roots, I have to say it’s rather good fun regardless. And you’re given so much freedom in constructing your ship how you see fit, with any of the available weapons, that you can cater combat to your style. Fancy hanging back and picking off enemies with SRMs, missiles, and other more exotic long-range weapons? You can do that. Or beef up your shields, cover yourself in lasers and cannons, and charge in, guns blazing. Or anywhere in between. It really is fantastic. 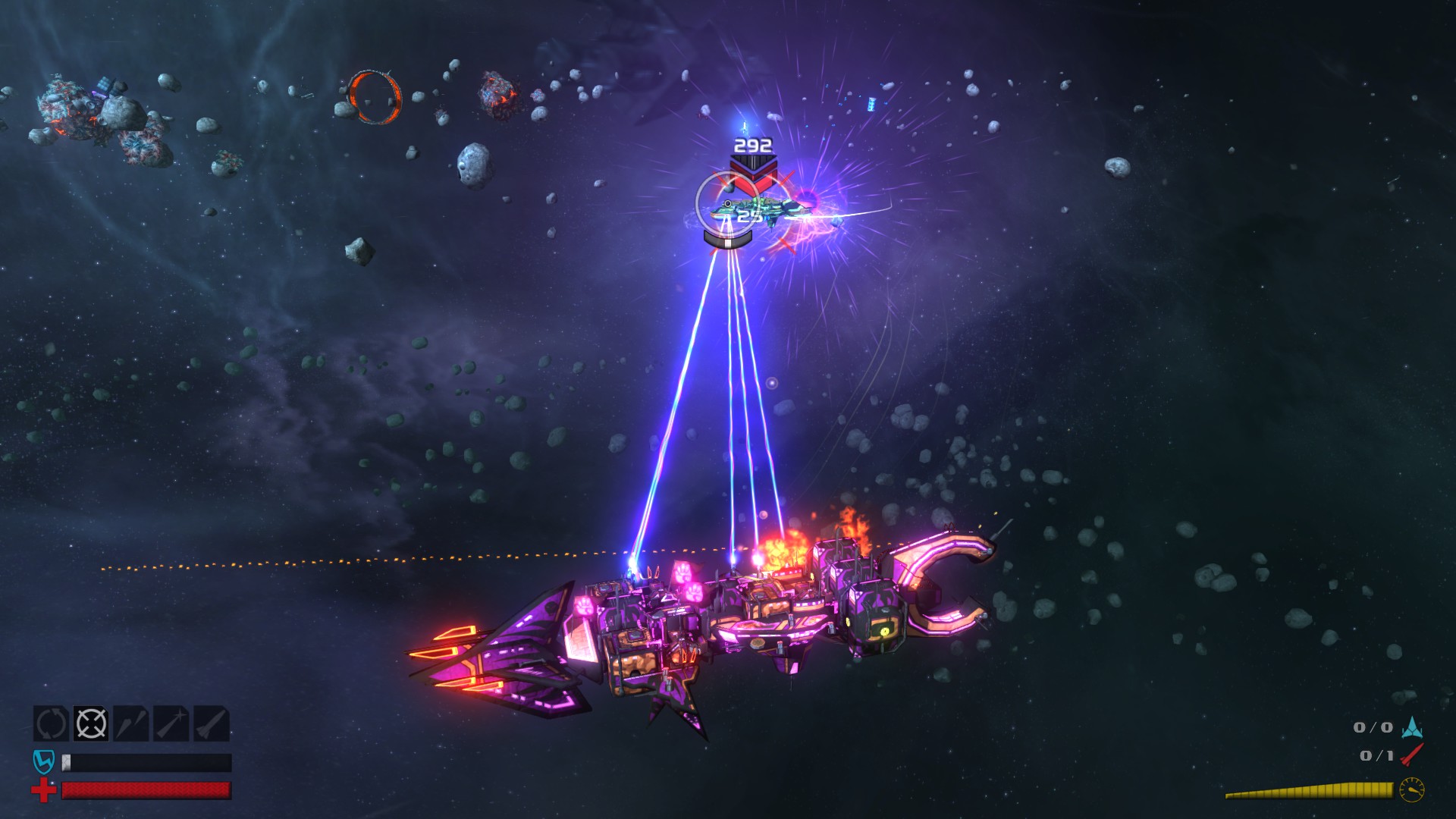 Both modes are similar whether you choose to play the campaign or start a new sandbox game, with the only differences being the structured story wound into the campaign mode and the plethora of controllable game parameters given to you in sandbox mode, all of which are pre-set for the campaign. There are screens worth of settings with which you can tinker to tailor the sandbox to your liking. 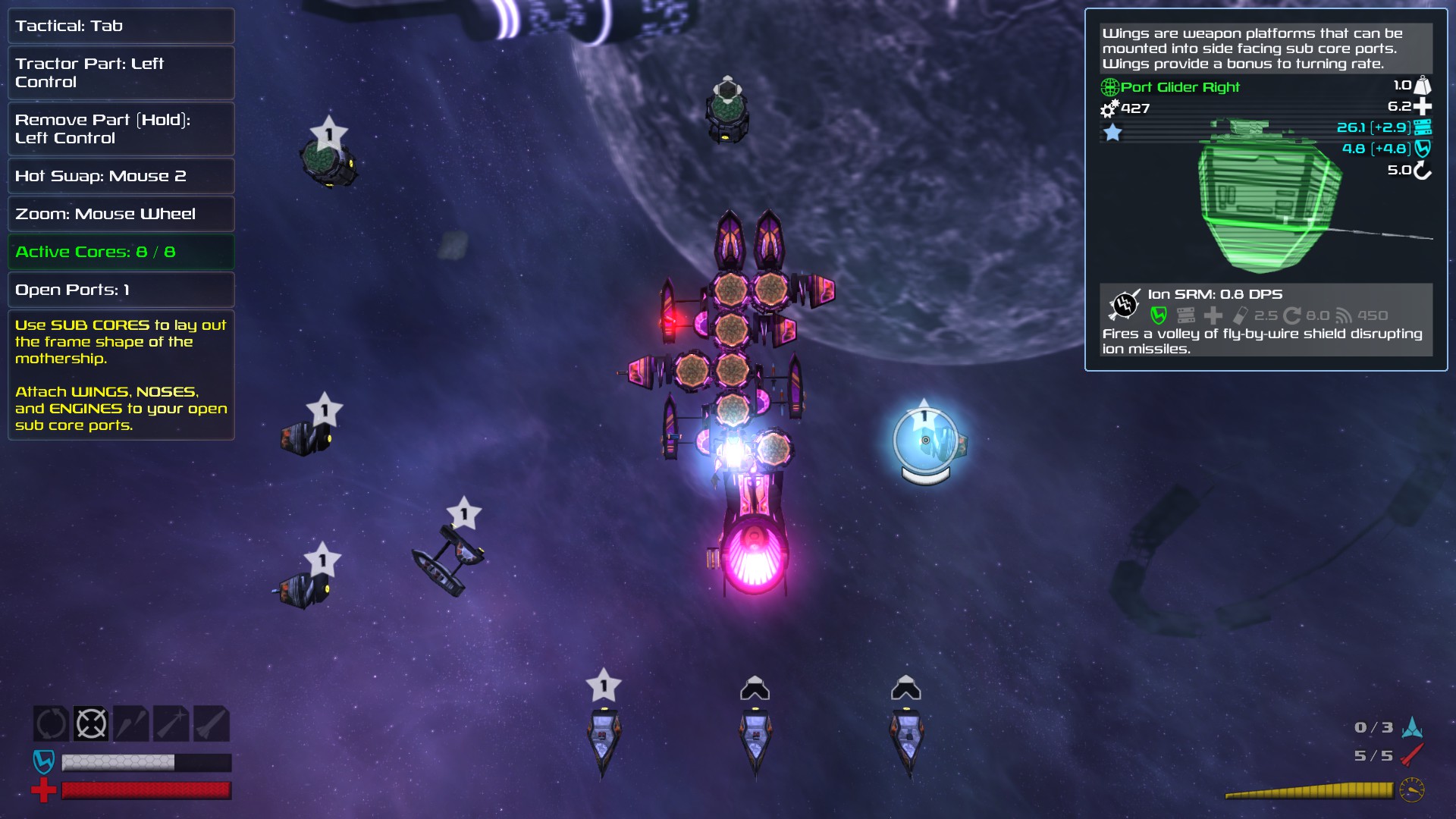 The game has so much to do that any high-level description just doesn’t do it justice. One highlight for me is the shipbuilding, which allows you to customise your modular mothership with different submodules, wings, noses, and engines, in a grid-based layout. Similar to traditional rogue-like loot, the modules are procedurally generated, with each component of the same type and ‘family’ of module having the same base stats, but then different bonuses and weapon options that differ based on the whims of the RNG. Different layouts and module choices change the combat style completely, making it easy to change your game if you start to get bored with a certain play style. Another highlight is actually a bit of a gimmick: the ability to pilot any of your ships at any time, leaving the others under AI control. Bored of controlling the all-powerful mothership? No problem; just jump into one of your fighters and enter the fray! 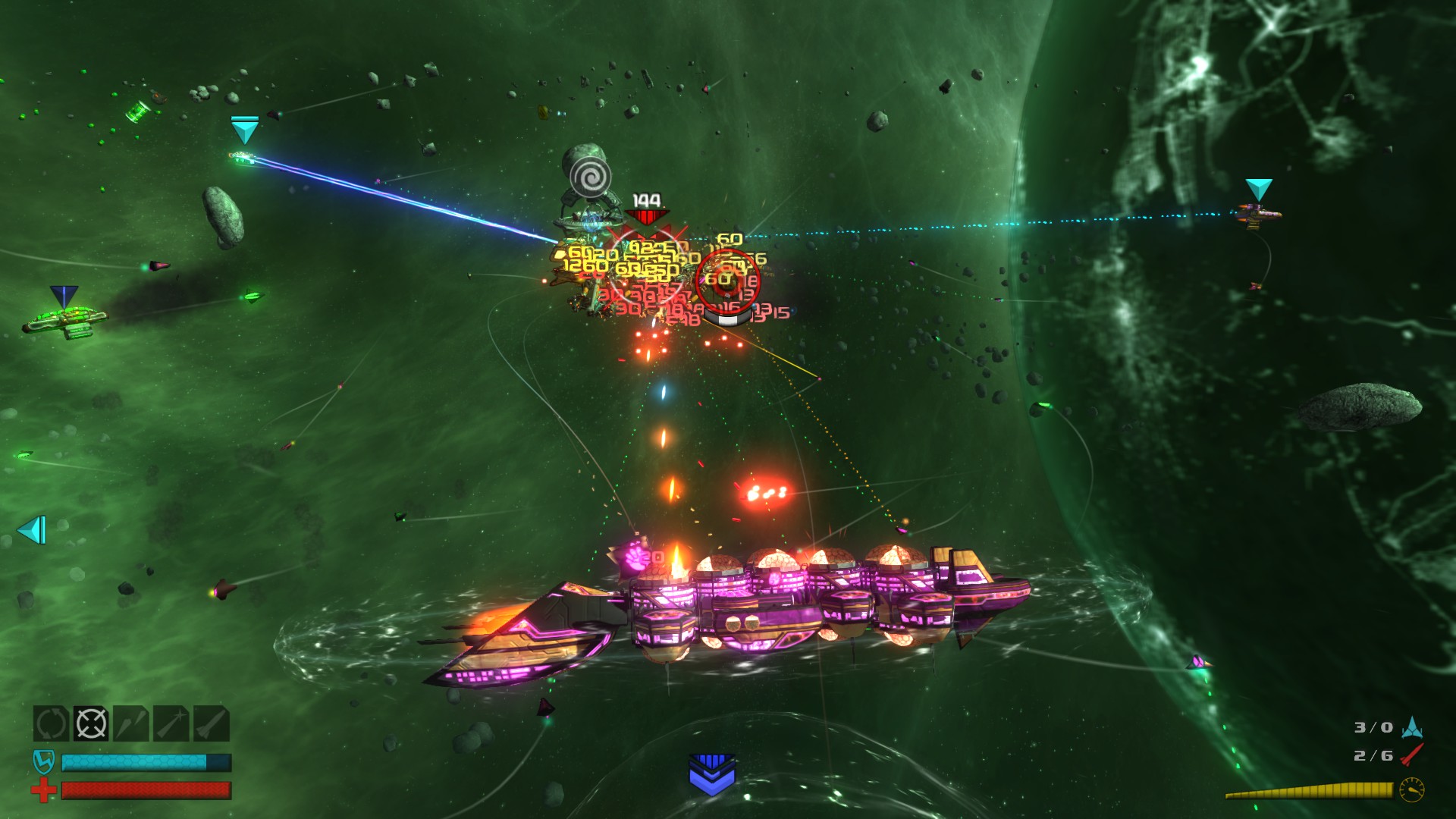 However, SPAZ2 does get very grindy, particularly in the campaign mode where feature availability is dependent on your story and level progression, but normally you can find things to do if you start to get bored. I found controller support was a bit flaky, but I gave up on it in the end anyway, as I much preferred keyboard and mouse. And the high production values are diminished slightly in two ways: the video links on the main menu, which minimise the game and take you to youtube in a browser window, kill the immersion somewhat; and the help windows that feature on some of the menus don’t seem to have quite the same pizazz as the rest of the game. Oh, and for some reason, Steam Cloud Sync is really slow: a couple of minutes to sync my game every time I stop playing. That said, game stability is excellent and I haven’t seen anything that I’d call a bug.

As a humorous space exploration and management game Space Pirates and Zombies 2 is really quite good. As a space combat game it’s excellent. As a blend of the two, it is a beautiful thing.

Play it, today if you can. 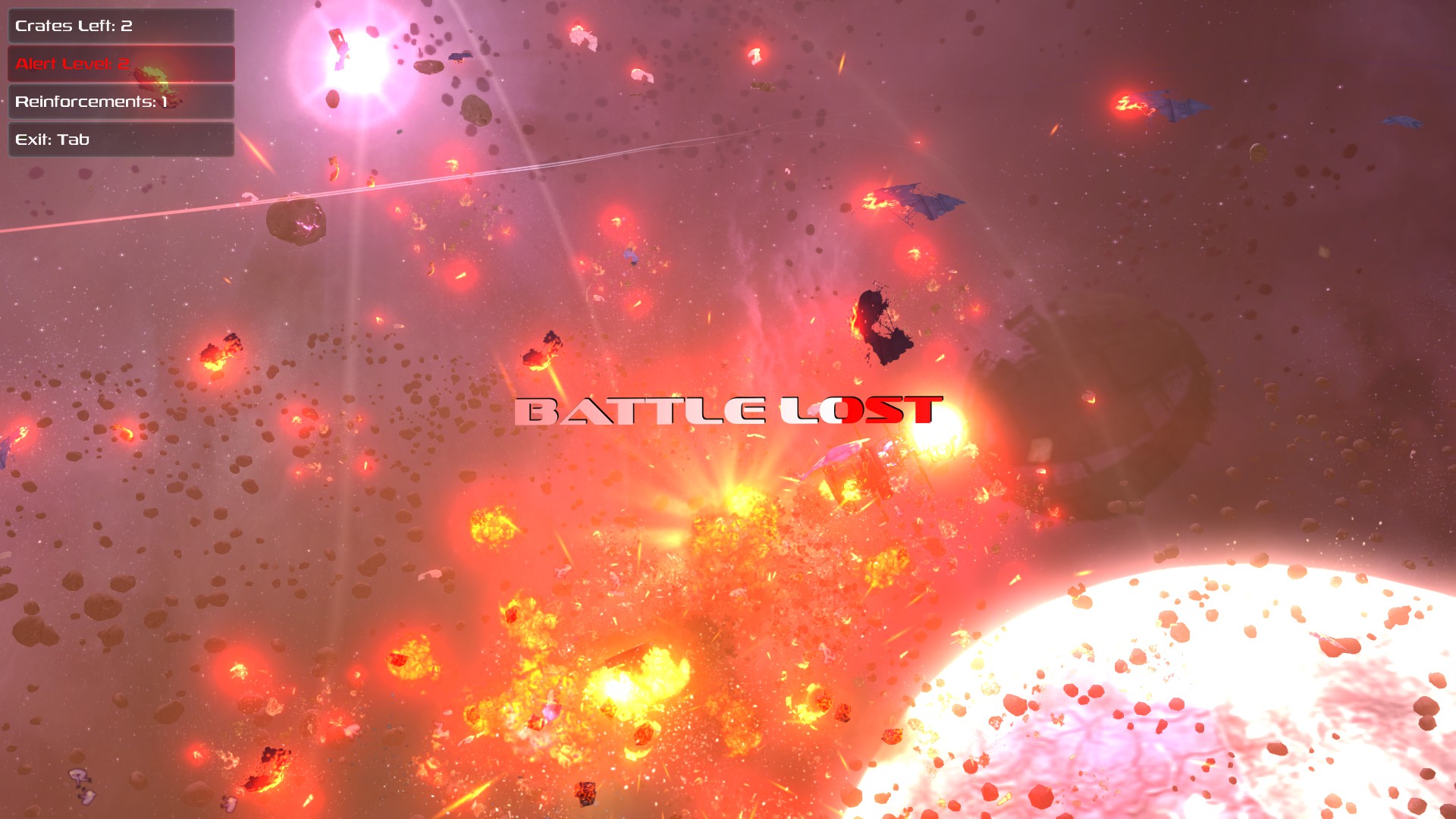