The Black Death provides a MMO experience set in a medieval world plagued by the Bubonic Plague, including sword fights, poverty, and persistent gameplay — mixed along with survival and difficult gameplay.

The Black Death is a multiplayer game that pits players in a dark medieval Europe, where it’s the survival of the fittest in a land ravaged by the Plague. The Black Death’s world is a grimdark world where death is around the corner. After the Plague left a trail of destruction across Europe, those who have lasted long enough against the Black Death now struggle to survive when resources are not only scarce but commonly inappropriate for consumption, causing illness to those fortunate — or unfortunate — that ate it. Other survivors are also a matter of concern, as they might pick on those that are faring a little better.

In The Black Death, gamers start as beggars and have to work their way up to other professions, featuring their own skills and ways to survive. As a beggar, users are set to wander a 14th century western Europe in an open-world multiplayer map. Even though there is plenty to do, it is better to go after the correct class, as a beggar won’t be an efficient swordsman to take on a bandit camp, or skilled enough to hunt wild animals. As players survive to see the sun the next day, they receive experience points, which allow them to level up, making survival a key mechanic to progress further. 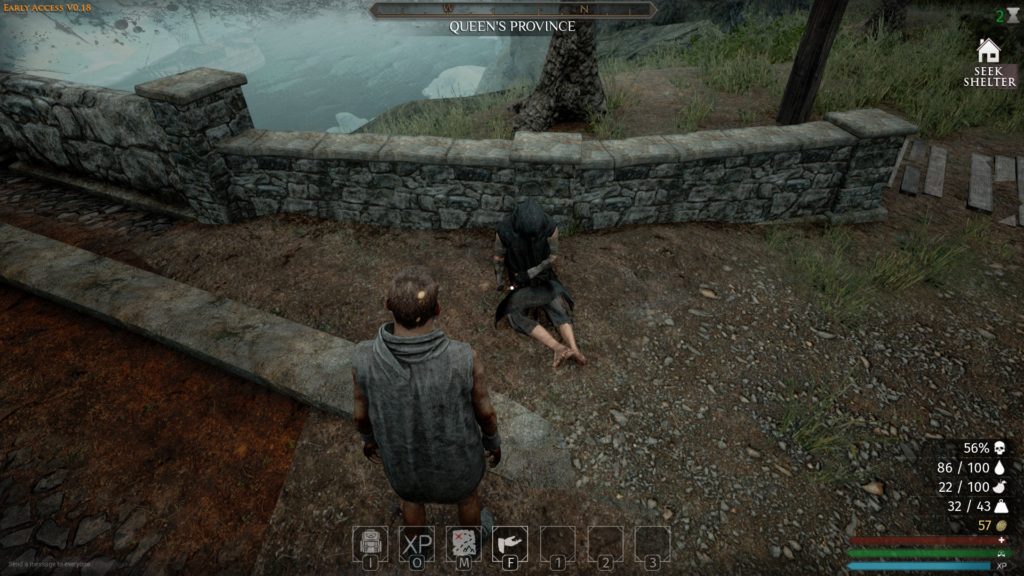 As a survival multiplayer game, one of the most important things is the player base, after all, multiplayer games are all about interaction between multiple parties. For Black Death, there were 14.9 average players in the Last 30 Days, according to SteamCharts. The peak players were 54, that is, the highest number of gamers at the same time. Having approximately 15 average players might not be enough for those looking into doing PvP or similar, so be sure to bring friends or join a group of players!

Tools of the Trade!

As with most RPG games, The Black Death features a class system, called “professions”, each one with their special twist and set of skills adequate to the profession. While players start as the rookie beggar class, whose only skill is, well, to beg for coin, there are other professions to pick from as players level up, starting from the all-around peasant to a noble knight. Those higher classes receive special gameplay buffers respective to their professional duties, such as higher weight limit for peasants or knights’ abilities to inspect players for their real class (outsmarting outlaws) and available bounties. The professions system allows societies to be built in-game, as each class can contribute something and they are, in the end, dependent among themselves. Peasants know how to tend their crops, but those skills are of no use against a band of outlaws, what would require the help of guards, who, in turn, feed on supplies harvested by peasants. In theory, players could create a chain of command in an area of the map, as the game does provide tools for colonization — house-building, for example. 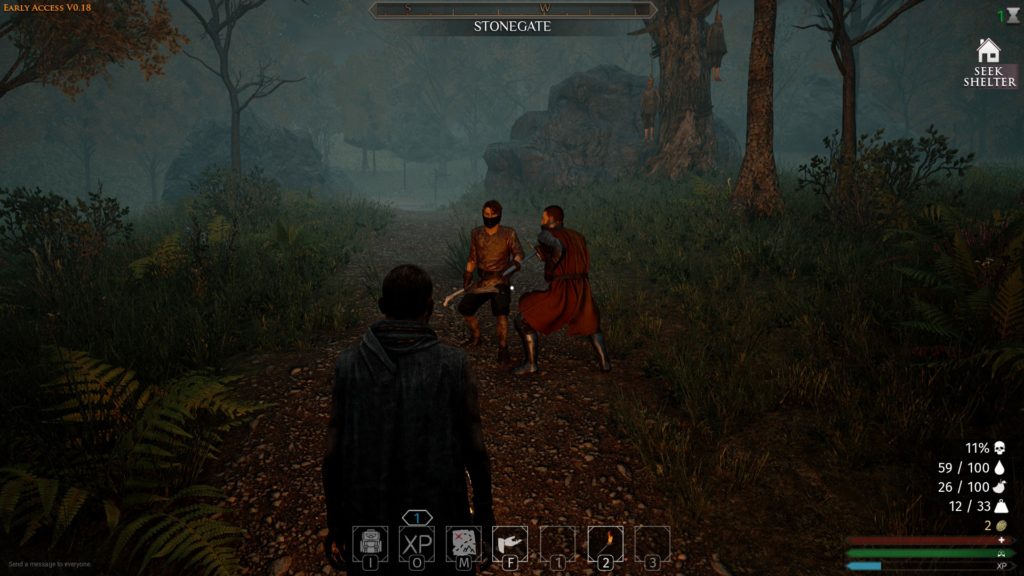 This way, each class can use their tools of the trade to ensure their survival in the harsh open-world of The Black Death. Although those classes might have a fair chance at surviving, beggars aren’t so fortunate. That is, rookie players are at a severe disadvantage, and it will take a lot of trial and error to survive enough to progress further into the game. For some people, this is one of the things that can be offputting about the game, as it is simply too grindy and disappointing to play as a beggar.

As said earlier, The Black Death is heavily focused on surviving, as it’s an important step to further progress down the tech tree, using XP levels to unlock new skills and recipes. But to survive, it’s crucial to find supplies, especially food and water, which decrease quite rapidly and will cause the death of those not well resourced. While water can be found nearly everywhere, drinking from random sources is not very healthy and will gradually infect players with the Plague. In fact, such a transformation from a healthy human into a diseased plague victim is visible on the character, with bulbous and other deformations appearing on the character’s body. 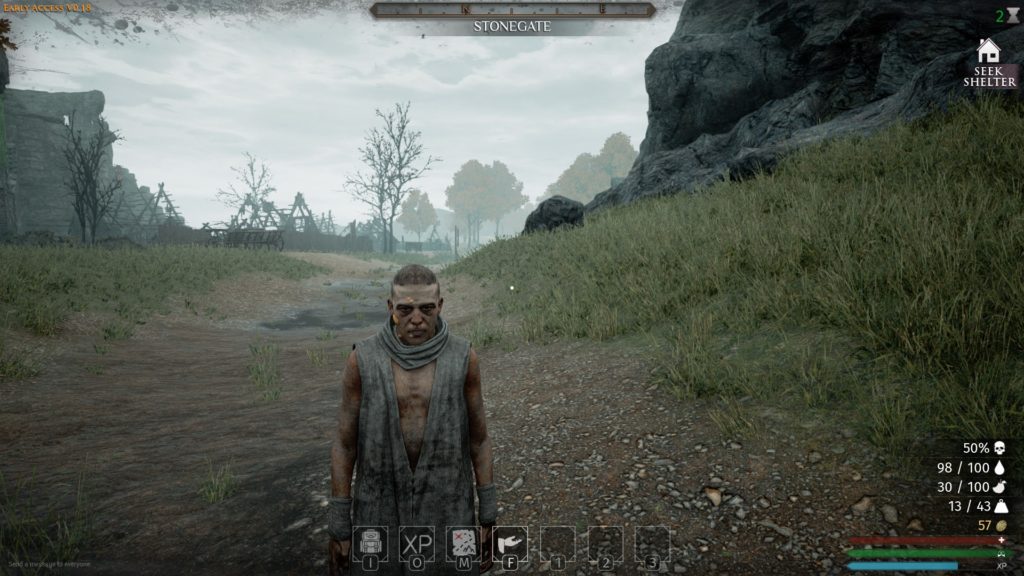 The Black Death does a great job on creating an environment where the effects of the plague are visible. While walking down a dirt road, a burned village might enter the view, likely burned down to avoid spreading the plague, or the effect of a raid as the rule of law deteriorated. Really, how could the local nobles keep in check with their villages if their soldiers were sick? The well-thought scenario of The Black Death is evident when wandering the streets of the capital of Mercia, Raven’s Reach, where entire districts of the town are marked in red on the town’s map — a dead district. Wandering there is dangerous, but those who do adventure there will notice the infamous Plague Crosses. Red paint crosses drawn on the doors of those victimised by the Plague. It helps build immersion to the game and make Black Death have a more believable atmosphere. 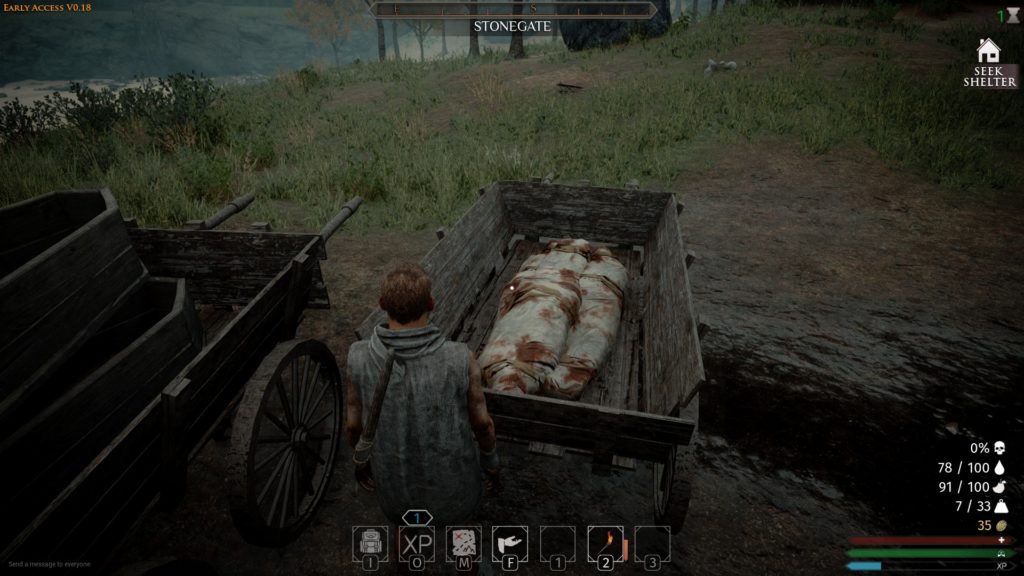 Black Death does a great job on creating convincing towns, but what about the areas around it’s open-world map? Well, they were not forgiven either! It is common to find wooden carts with dead bodies of those who fell prey to the Black Death, and it’s not only a shocking view for the character, whose vision gets blurred with terror, but it’s possible to get contaminated with the plague as well. Pestilence is a real mechanic in The Black Death, which improves the overall atmosphere of the game, helping tailor up hard survival gameplay. To exemplify, in another RPG survival game, it might be possible to find a low-grade meal, which could cause a temporary five seconds poisoning or simply replenish less hunger. Well, in The Black Death, it is much less forgiving. Eating a low-grade meal (dirty water or rotten supplies) will gradually increase how much the plague has taken over. For those interesting in having a look, the above screenshots show, by the bottom-right, a 0-100% counter with a skull next to it. That’s the plague counter! 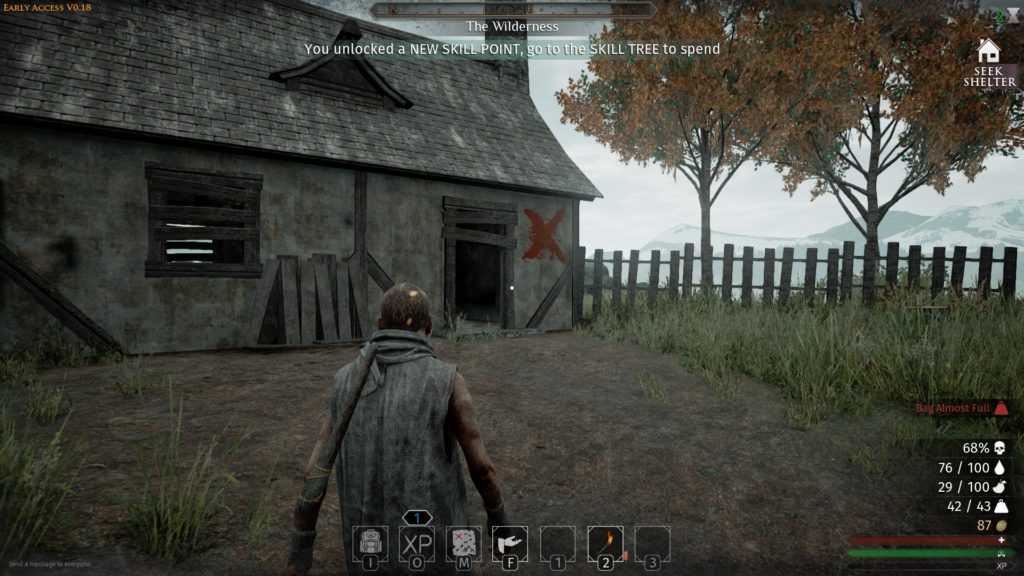 How serious is it to catch the plague? Very. While it’s easy to die in The Black Death, getting ill is even easier and quicker, all it takes is standing by a body bag cart for a few minutes. Of course, it might sound simple to avoid, after all, who would stand that long in a single spot? Thing is, it carries over. A short interaction here, another there, a visit to a plague-infected house and bam, the counter is already nearing 100% and medicine is a luxury commodity. All things considered, it created a refreshing scenario for any fan of history to have a look and wander around, as while the plague is nearly everywhere, there is this sense of safety which the game is quick to prove wrong when the plague is underestimated — interacting with plague-infected objects might be profitable, but is it a good idea?

The Black Death is a hard one, and not only in regard to its difficulty.  As a whole, it does not break any new ground in the genre, although the atmosphere is well-woven into the games’ setting and mechanics, which isn’t something seen very often in multiplayer survival games as they often lose their “atmosphere impact” after some time. The Black Death has a refreshing take on a multiplayer game, using a setting not commonly seen in games, and not only that, it also manages to capture the theme in detail. The main adversary in The Black Death isn’t a vicious hound or outlaw behind a bush but the very plague, which taints everything, and the game did a great job of portraying that.

While those details are welcome, there is this feeling that progress is too complicated. A beggar has a chance of getting one coin at a time, but a roll of bread costs fifty and a tiny flask of medicine for the plague from a monk might cost over two hundred. It is fair to say it’s realistic, after all, beggars don’t make much, but it’s always nice to remember games have to be fun. Those undecided on whether or not to pick it up should wait for a sale and have a go. If a fan of history, or simply interested in the Black Death period in Europe, this should be even more appetizing, as viewing and interacting with a world drawn similar to what is written in the books is quite an experience!