Misadventures and mistakes in the vacuum of space, more than worth your time

If you look in any forums, reviews, or even talk to another person playing Heat Signature, you will probably hear a story. You’ll hear a wild, crazy story of a heist that they almost bungled up, but somehow managed to succeed. Or you’ll hear a story of a brilliant solution to a seemingly impossible problem. The game generates these stories by design. Suspicious Developments has created a dynamic toy box for players to jump into and play. They wanted players to come and make their own adventures, and to share them with each other. Which is why what I’m about to suggest might seem strange: if you want to play Heat Signature, you should probably avoid reading any of these stories. Because making your own adventures is probably the best part of Heat Signature. 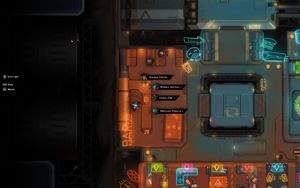 Heat Signature is a game that is very clear about its intent: it is a game about infiltrating spaceships. (For the record, I will not share any of my own anecdotal escapades in this review, as much as I desperately want to.) You’re hired to steal a top-secret device, or hijack a ship, or “off” someone, and so on. You can’t opt for any other career path. Further, the game is highly geared around playing smart. You dock into airlocks manually with your tiny pod, making sure not to get spotted by the ship’s vision. As you clear out a level, you feel like an intergalactic Anton Chigurh, like a methodical, unstoppable force of power, focused on your task at hand. You have your standard array of melee and ranged weapons, but also unique equipment, like creatively designed teleporters (for example, one can swap your position with another person). There is a wonderful dynamism to all of the games interlocking mechanics, encouraging you to mull over the possibilities. At any moment, you can freeze time to think over your actions. (If you’re spotted or aiming, things slow down, too.) You’ll need that mechanic because you are fragile. You don’t have any armor; one hit, and you’re out. You don’t die instantly, however; instead, you’re thrown out of an airlock into space, giving you an opportunity to remote control your pod and swoop yourself back in, and decide whether or not to dock once again, or head back to a friendly station. Every time you take a bullet, you’ll be able to survive the vacuum of space a little less. And then, you’re dead. Forever. It’s a permadeath game, and when you die, you instead take up another character drinking in your honor at a nearby bar. The game is designed with smart and cautious play in mind, and all of these elements in concert make the player feel like a regular Sader Fiasco. 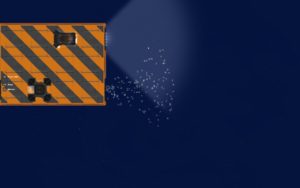 Sader Fiasco? That’s the master freelancer the game starts you out as– crashing through a window to your possible demise. (This may become a calling card for Suspicious Developments devs; it appeared in Gunpoint as well.) After a tutorial mission, Sader Fiasco retires. And… that’s about it for the story. There’s a little bit of world-building, and it’s actually stellar. All four of the in-game factions which you play against have their own unique politics, ships, origins, and moral codes, some of which determine AI behavior. What small amount of writing that is there, is witty and engaging. I genuinely wanted to see more of this story characteristics because they were so enjoyable. It’s a shame a lot of this information is locked behind late game missions because these factions are genuinely fascinating. Since Heat Signature emphasizes player-created stories, it deliberately drops any narrative. The game is procedurally generated, so a lot of the game is about seeing where these systems can take you as a player, but this also may be Heat Signature’s biggest downfall. 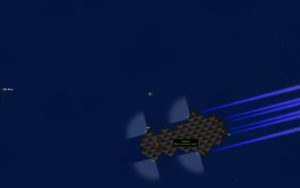 The problem is, while there are plenty of mechanical stories to tell, I can’t really think of many narrative stories I discovered myself. Characters will have personal missions to go for (revenge, debt, etc.), but that’s about as interesting as those narratives get. The non-mechanical stories are very limited and very empty in stark contrast to the mechanical ones. This doesn’t have to be a huge problem, but because the game lacks a broader narrative, it’s very easy to get lost in a directionless haze early on. You can focus on faction strongholds, sure, but this is a very vague and disconnected objective. The metagame feels slow and unproductive. You slowly liberate space stations, but they unlocked what felt like very little. You have this massive map screen which isn’t all that necessary. The only benefit is that you can encounter different ships than the ones you’re objective is on. I felt like all this empty space could have had way more things going on inside.

The problem of procedural generation seeps into the level design, as well. As the game gets into the later hours, I felt like I was dealing with the same missions over and over again. Ships start looking the same, AI has no variation, and the missions begin to blend together, with only a handful of objectives. They were fun, rewarding, and challenging missions that I had a blast playing and trying new solutions in, but they felt similar regardless. There are also a few mechanical flaws (the difference between lethal and non-lethal, for example, is totally trivial most of the time.) (Also, pro-tip: “T” lets you throw items or eject your pod; the game never tells you directly.) I seriously think Heat Signature could have benefited from the slightest story structure (especially with such an interesting world!), or a small set of predetermined missions, or a greater emphasis on roleplaying, or just something to keep me on track as a player as I figured out what I wanted to do. 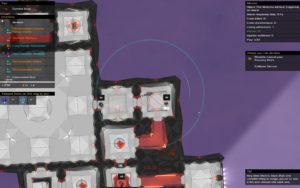 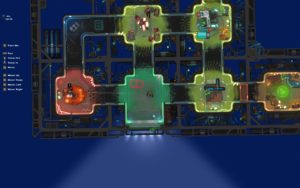 Once you figure out what you want to do in Heat Signature, you can feel that click. What you want–or, at least what I wanted–was to take part in these wild space exploits. You have to take risks, you have to take missions you don’t know if you’ll be able to beat. You have to get wild. Because when you start to risk it, you can get the biscuit. You discover wild solutions. You discover wild failures. You begin to grin like an idiot as your plans spiral into failure, or even success, somehow. Unique client requirements like “don’t kill anyone” or “don’t get spotted” and limited equipment constantly encourage you to experiment. I actually think they could have gone even further with this; limit my inventory even more, expect extremely specific things from me, force me to really think and really get into these systems at play. Don’t let me game this system. Failure isn’t necessarily fun in Heat Signature, but it almost always feels like a purposeful failure. Your demise was clearly predictable, you just didn’t predict it. You feel like an idiot, but you can’t help but smile. It’s a game about experimentation and discovery. That’s why you shouldn’t read any anecdotes or stories before playing, I think: it robs you of this joy. Learning to take risks and think outside the box is what makes Heat Signature so damn good. Discovery and revelations of how mechanics suddenly begin to interlock together into this disastrous concerto of missteps and mistakes or a miraculous delivery into success. 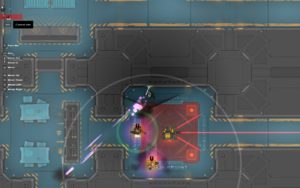 Heat Signature is a game about infiltration, but it’s also about experimentation and discovery. It presents you with a little sandbox of toys and lets you just have a go at it. It infected my mind at times, replaying moments of ingenuity over and over in my head. The game world is fascinating, but it’s too bad it lacks any story inside of it. The metagame is lacking, and there are lulls of excitement about, but that doesn’t negate the utter joy I experienced. There is a serious need for direction, one that almost had me stop playing, but I am so glad I didn’t. It’s a shame that Heat Signature doesn’t give its players more to go off of, because what is hiding in this game is shining and bright, and some people might miss it. It’s a game about little adventures. You need to figure out your direction because without that, you’ll miss out on the brilliant realm of challenging adversity Suspicious Developments has set up. By managing to discover that in Heat Signature, I stumbled onto an exciting and blossoming world of dynamic death-defying capers that is totally engrossing and full of stories. 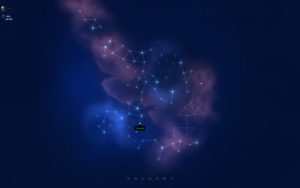