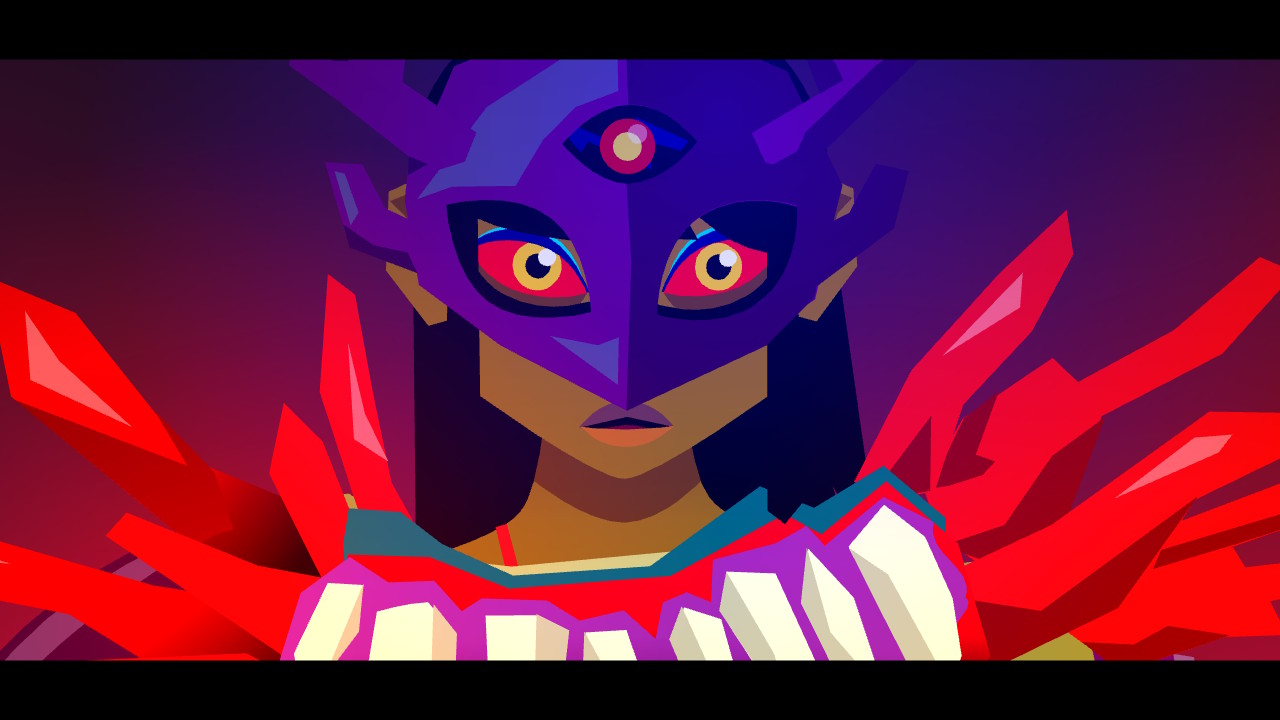 Take my arm and I’ll take your eyes!

At some point in our lives, we might fantasize about going to another world. A place where all of our dreams come true and little to no harm comes to threaten the tranquility unless you want it to happen. Sadly, when this happens in fiction it does not always turn out this way.

We start in the shoes of Sasha in an unfamiliar path leading up to a familiar building that looks like her home. However, when we go inside, we find it is trashed. Out of all the things that survived, a lone mirror stands intact and one look brings back memories. Memories of a towering monster staring her down, an arm, your arm, being severed when trying to reach for an unidentified person, and silhouettes of three people. Once you come to, you find another mysterious figure (is it another monster?) holding out a sword for you to accept. Telling you that your family is out there and if you manage to find them and bring them back home, they will be able to open a passageway to go back the way you and your family came. 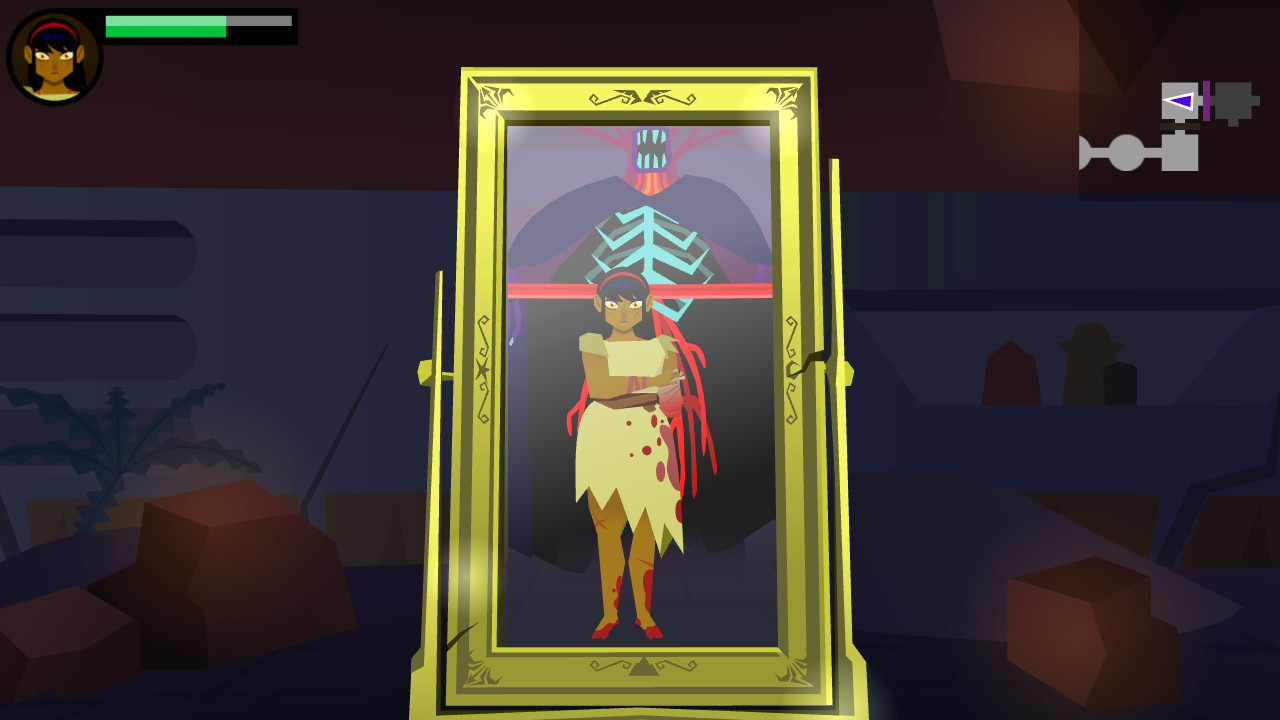 Just because you only have one hand does not mean you will be willing to take hits. With the need to have a weapon fulfilled, it is time to make some monsters regret crossing your path. It also helps that Sasha’s mother found time to train her, which we see as a flashback and it turns out to be a good way to train the player. Each time you move your finger on the screen, it equates as a slash Sasha which will perform with longer slashes dealing more damage than shorter ones. Though the combat not only deals with how you play, it determines how the enemies act as well. 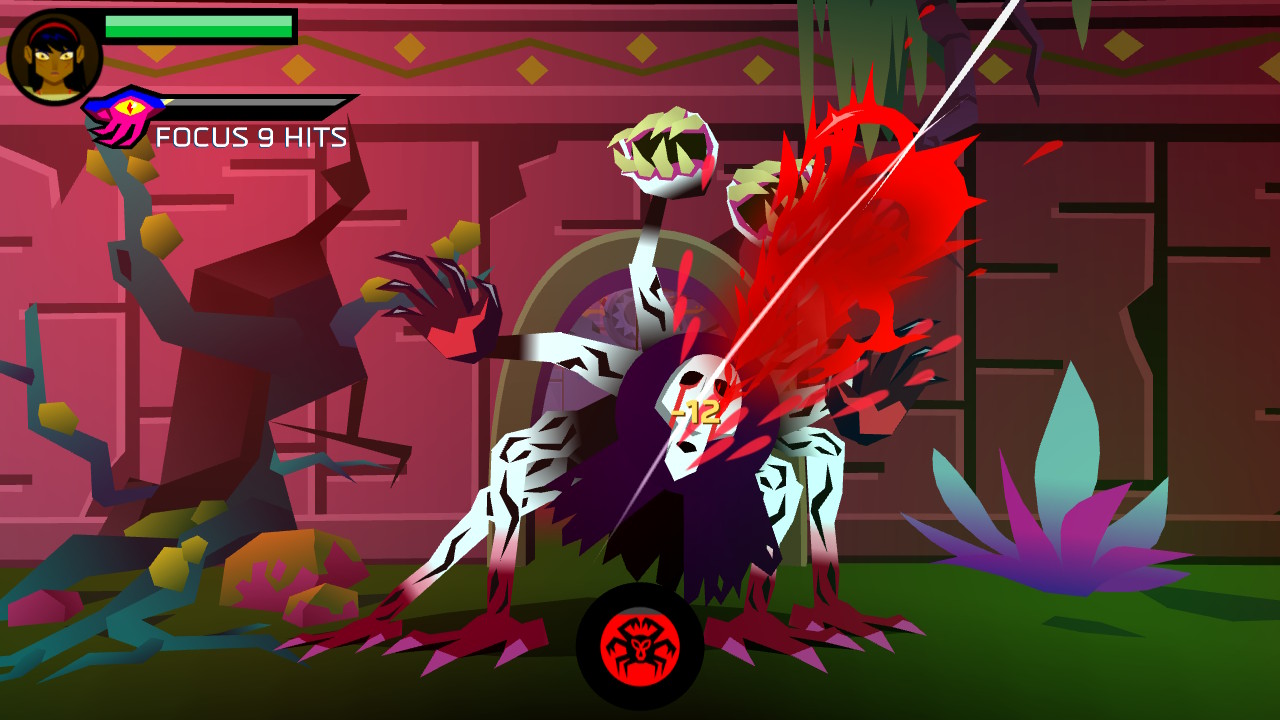 Merely saying you just slash at enemies like you would at fruit is underplaying how deep Severed is with its combat. A lot of it concerns how the monster acts in terms of what their weakness is, how they attack themselves, and how they block attacks. This is dictated by how a certain monster is designed, thus it is easy to tell at a glance how to defeat it and avoid their attacks after you get the hang of combat. Depending on the design, the monster’s weak spot can vary between being out in the open, having to attack so it can be revealed, or waiting for it to be revealed by itself. There are also two different types of ways monsters attack. There is a standard way where they will wind up their desired limb up and slash at you and then an alternate attach which charges over time. No matter which, attacks are choreographed so you can easily block their attack, or refuse the attack to happen in the first place by visual representation, winding up and turning red the moment you can parry.  Sometimes there is a slight noise alarm, and an icon at the bottom of the screen can be tapped to switch to that enemy immediately. Additionally, if a monster has a constant charge attack and successfully blocks your attack, the monster will get a good chunk of charge added to their current amount, bringing them closer to being able to hit you. 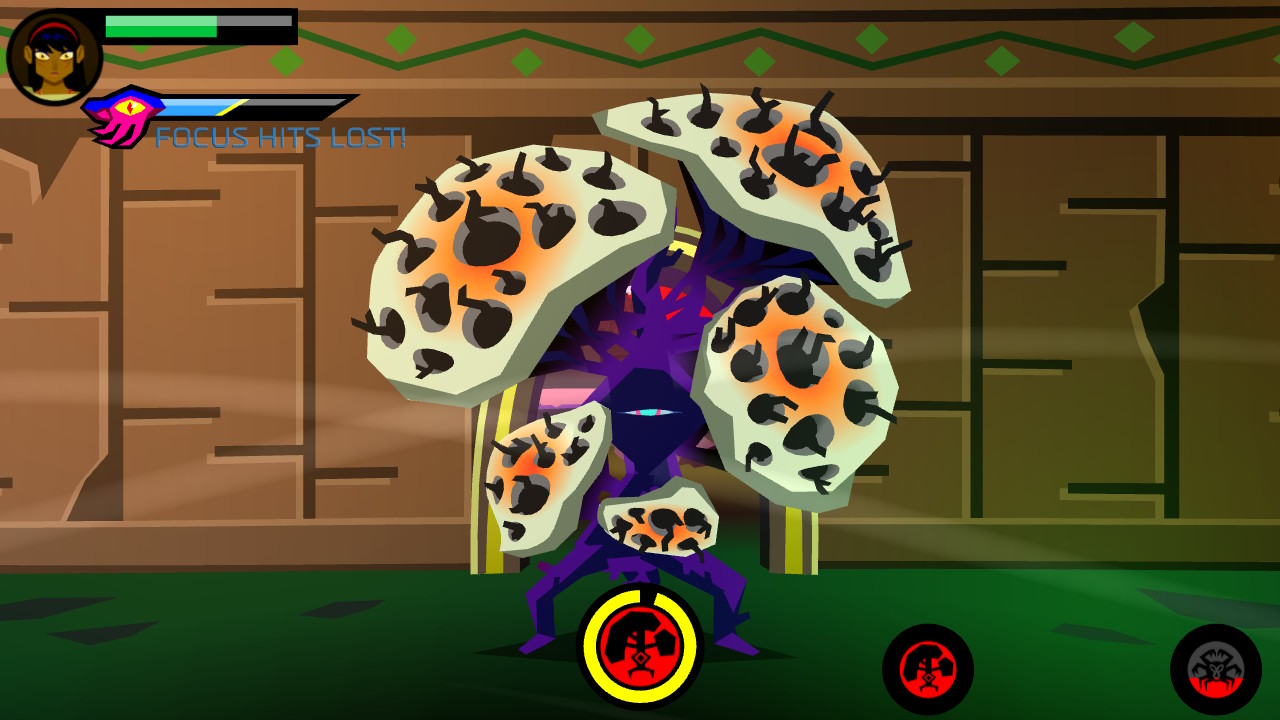 Our heroine, Sasha, also has a focus meter that fills up with each successful hit you land in that battle. Racking successful hit after successful hit without getting blocked or switching to another monster does seem to make it fill up faster. Once you achieve max focus, when you defeat a monster you will be able to put them into a very vulnerable position for a limited time for you to sever one of their body parts.

Severing the body parts from the monsters is not just something fun to do or a way to get revenge. These parts have a hand in upgrading Sasha. The type of body part and the amount needed to keep upgrading depends on which level it is and when you get a certain ability. This certainly makes you very powerful once you are fully upgraded, but this does not happen until close to the end of the game, leaving you open to choose which ability is important to you given the circumstances of the fight. What if you are terrible at severing the monster’s parts or filling up the focus meter? The game covers this by having giblets stored in vases you can slash open. One of the upgrades let you transmute giblets to body parts and the game gives you more than enough giblets that I can only assume you can upgrade yourself almost entirely with them. 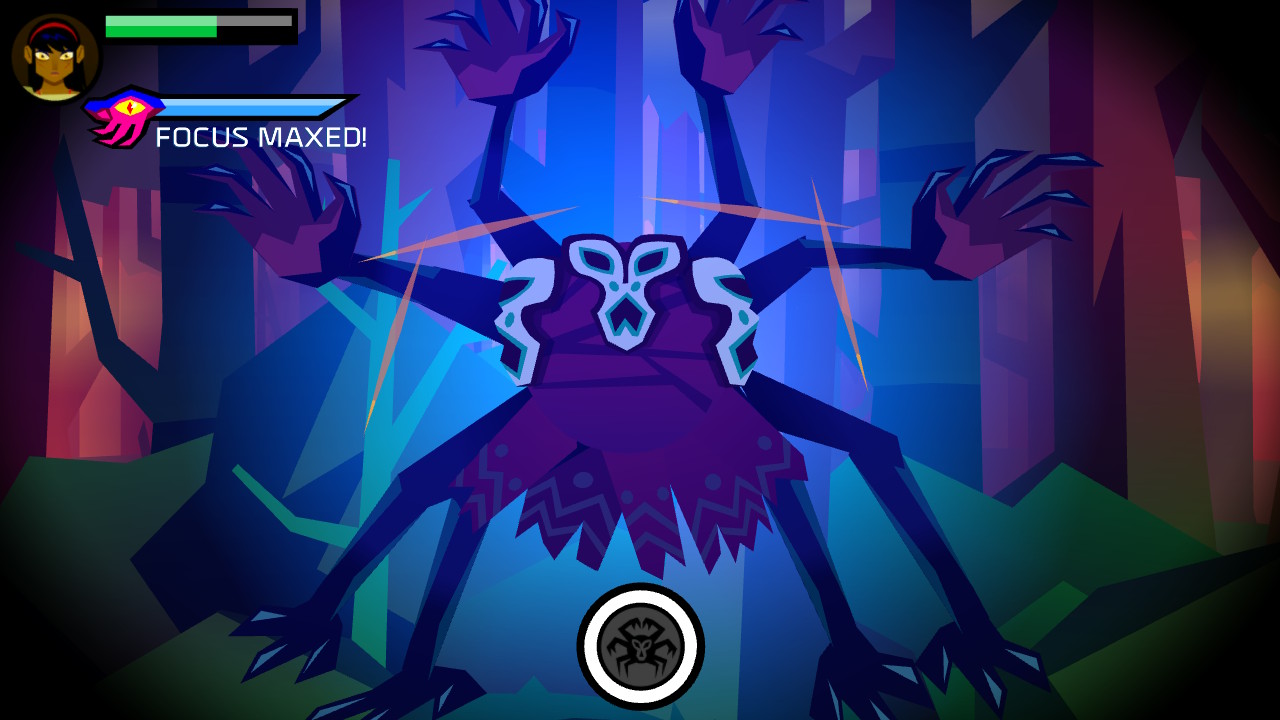 Not only are you given a sword and have the ability to upgrade yourself, but you can also gain abilities from bosses as well, giving you a piece of armor to wear as a trophy, or by finding it while exploring. This is actually teased very early on as you travel around, especially in the first area, Domain of the Crows, where you get a preview of all of the abilities available. The abilities you acquire from the bosses, with the exception of one, can be used in battle. Each having their own consequences, mostly being mana drain, preventing you from spamming it.

The level design is great. It takes on a dungeon crawler design in both how you move and how the map is revealed as you explore. Each step you take is equivalent to a box on the map as this is not a free roam type of game. It really is not needed as the items you can slash/pick up will remain as long as you are in that area. This design also forces you to fight against the monsters rather than avoiding them until you get to a boss. Each monster encounter you will run into is visualized by a floating light in the middle of the path, both negating random encounters and setting in a set number of monsters that inhabit this world. With the whole game being about Sasha cutting through monsters to get to her family, it would not make sense if it was possible to skip fights. There are undoubtedly fights that are difficult, but just as you overcome them, Sasha will as well. 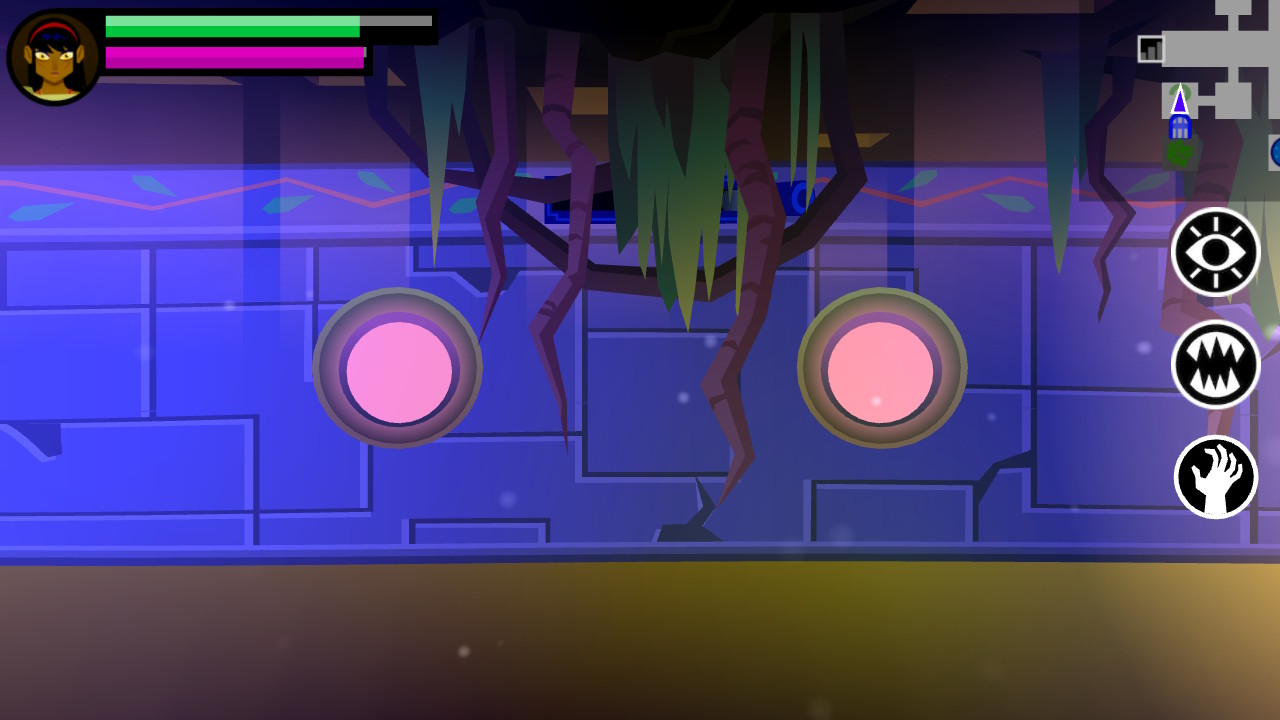 Puzzles are also incorporated greatly. The puzzles are not only used for your first run through, but other run-throughs when going for secrets. This makes you think about how you can go about going to a section of the map to another when you did not have to before. Having each area seem fresh, especially when monsters hide behind secret passageways, is really encouraging and rewarding when you get to the area you wanted to get to. Though there are some puzzles that are just based on the area at that time, so when you go back through it, it will not happen again. Thins such as a weird sac hanging off the wall spilling toxic gas or a giant monster’s mouth serving as a hallway that closes off, waiting for you to perish from the toxic gas with an attack on its uvula (or what looks like one) being the only way to get out. All this gives you motivation to look at your map and scheme up a possible way to get to it. As the map does layer floors over where the stairs are, I would not be surprised if this was also thought of when going around ways to get players to continue looking for secrets. 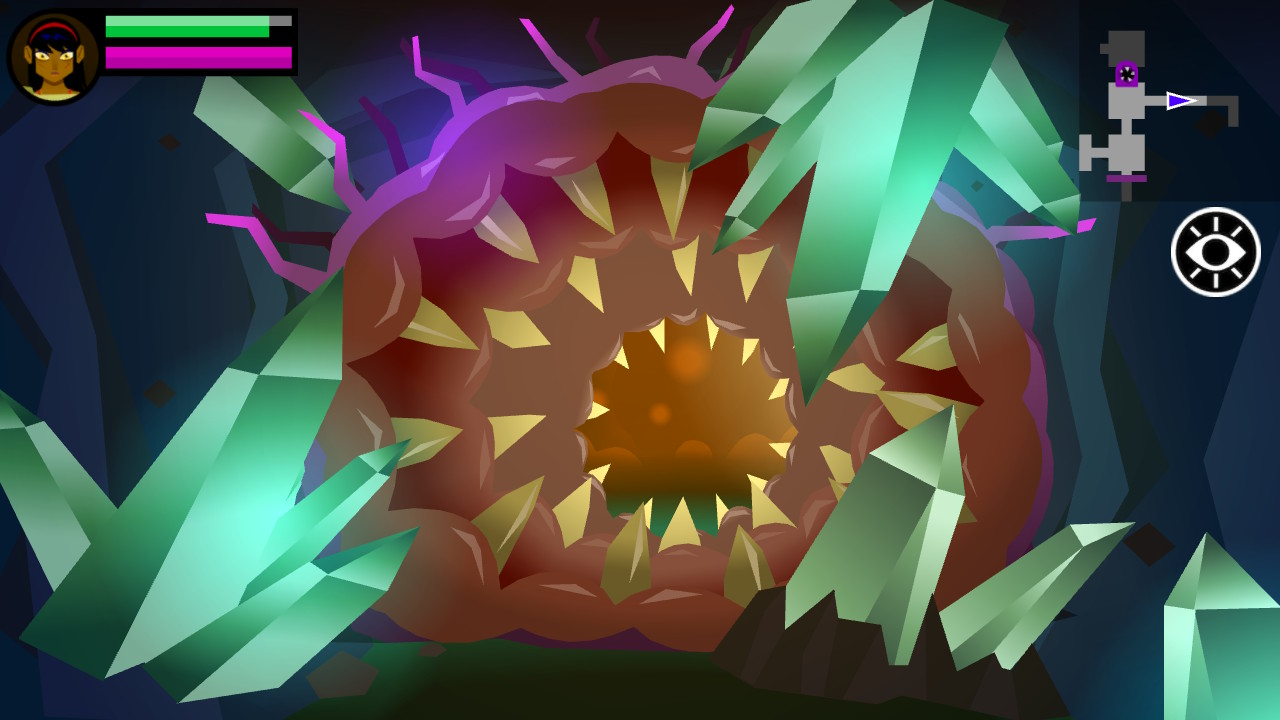 For those concerned about whether or not this game has save points, it does not let you save manually. However, it does save often enough that you will never have the reason to manually save it anyway. The game autosaves before each monster encounter, after hitting a story plot point, and after a few rooms if you already took care of the monsters. So if you die during an encounter, there is no penalization towards you in terms of having to redo a puzzle or some fights that happened beforehand.

If you were like me, you may find the art in this game very familiar. The team behind this is the same team that was behind Guacamelee, and you can really see the various similarities in art style when you compare the two. If you can only name one thing that catches the eye of potential buyers is the art style. Everything is absolutely beautiful. From the distant scenery you can ogle to the various designs the monsters sport as well as the various items you can pick up. Even the insides of each area is beautiful, despite you will see the same type of walls most of the time. 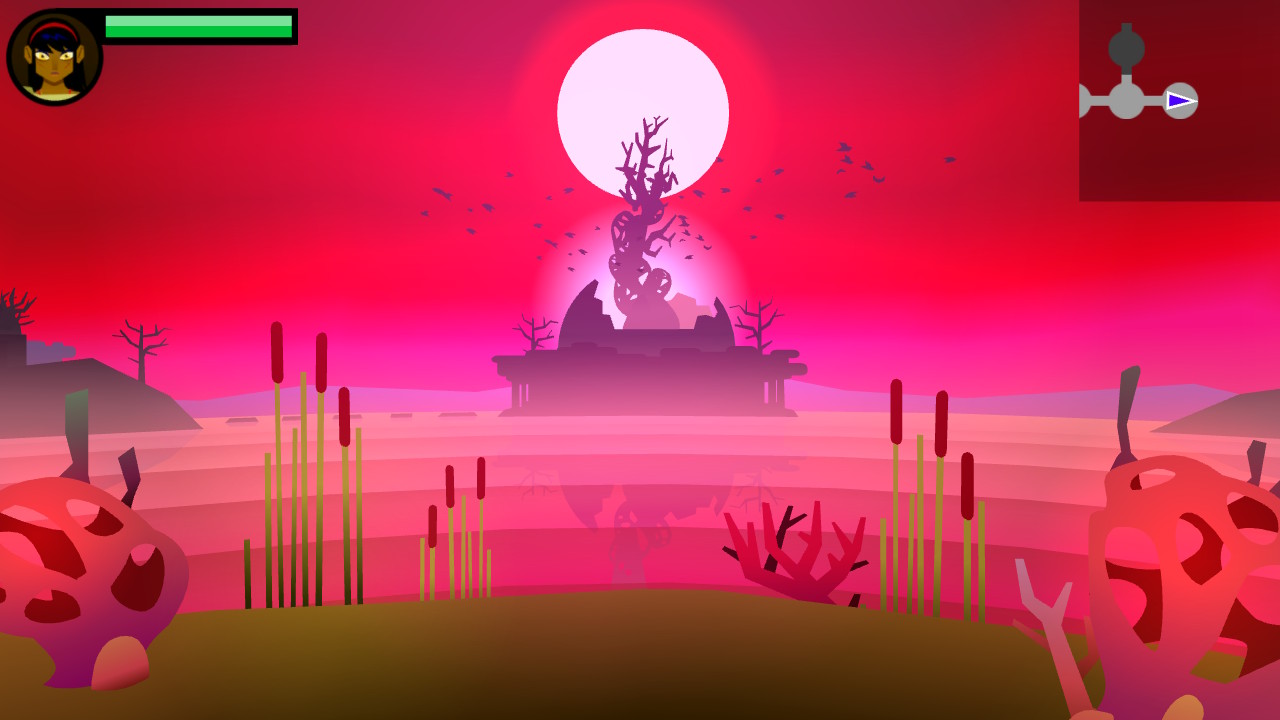 I do wish the team decided to go a bit more into the port so you can dock the Switch while playing Severed. Using one of the controllers as the sword so the beautiful graphics can be displayed on TV. 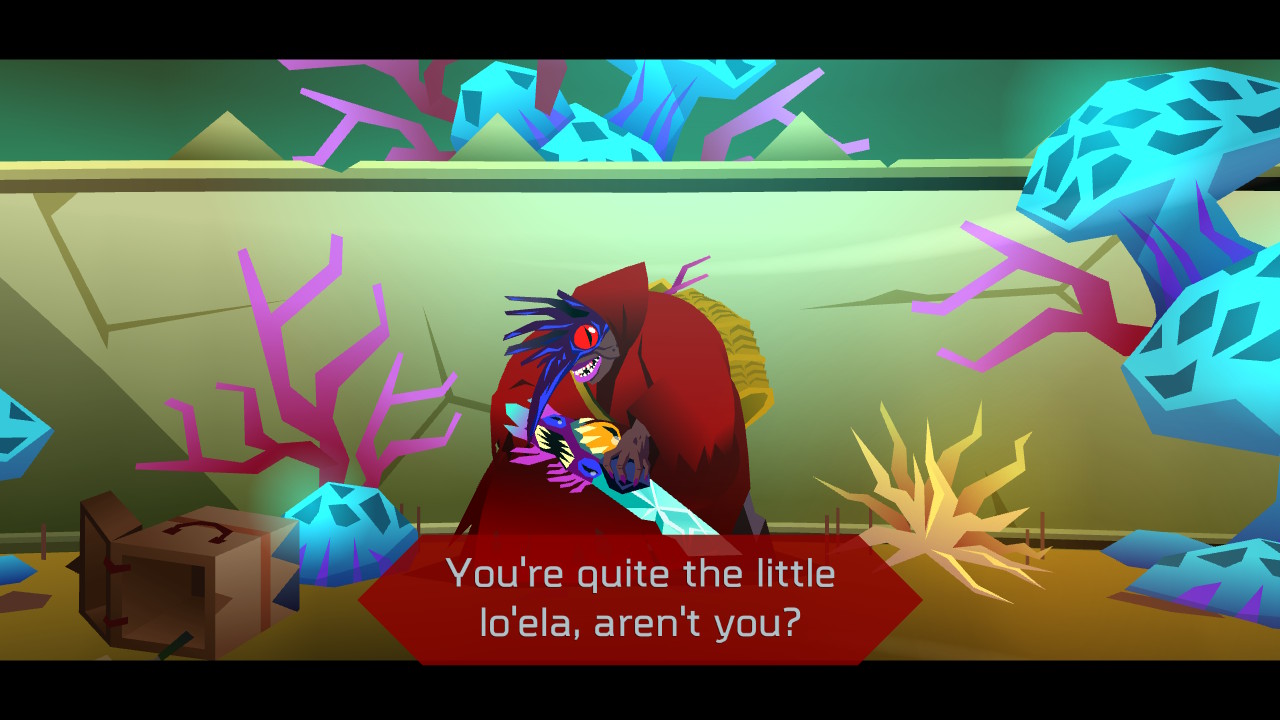 – Nothing to get you to start over again

Severed is a beautiful game that backs it up through its gameplay. I did not go into it expecting to not be able to put it down, but it happened quite easily.  It is hard to find anything that failed or did not quite hit. Even when I was constantly dying in a certain area, I was still having fun and did not want to stop. The only thing is just that after playing, there is little to bring you back unless you want to experience the bosses all over again as Severed can get you around seven hours of delightful gameplay if you want to discover every secret. If Severed grasped your attention, even if it was just by the visuals, I do implore you to play.