Do your taste buds yearn for a different flavour of strategic gunplay? Well this title from Skyboxlabs might just be the amuse bouche you have been waiting for …

You are the director. Your job is to recruit a bunch of hired guns and use them to orchestrate missions to take down “The Cartel”. Each merc has a unique skill set and has exactly what you’ll need to steal guns, interrupt supply lines, save hostages, formulate traps, and execute epic gunfights, on your mission to take down “The Cowboy” – the big boss responsible for a global crime epidemic.

Let’s get the elephant out of the room early doors. TASTEE: Lethal Tactics has got be, hands down, one of the worse names for a video game ever. The name is derived from the fast food joint which is your band of mercenaries headquarters. Whatever the developers’ intentions were in conjuring up this abomination is beyond me. Surely even Mercs: Lethal Tactics would have been a better fit.

It’s obvious from the main menu layout that multiplayer is the focus of the game. The quick match option is front left. There are twitch, discord and elite club icons in the middle and player notifications alongside a chat window to the right. All of this encouraging players to get connected and join the community. But I’m not here for the multiplayer. I’m here for single player content. 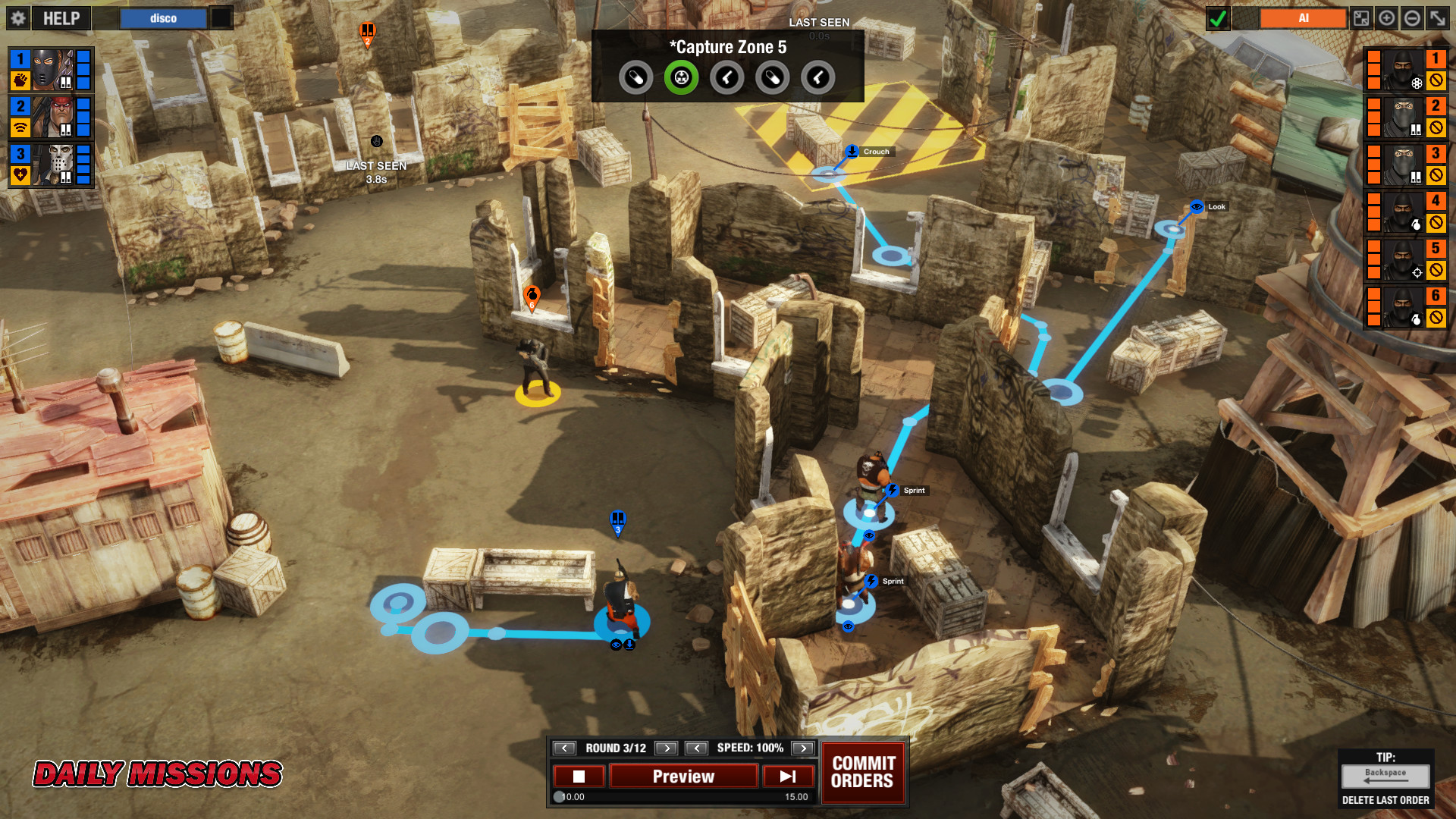 Lethal Tactics features both a 30-mission single-player campaign and daily randomized missions. There’s also a practice mode which allows you to try out various team configuration on 10 maps with randomised cover objects such as crates and wooden palettes.

Key missions unlock one of the 12 characters available in the game. These come under four different class types. Here is a breakdown of everyone, along with their unique special ability.

It took me a couple of missions to get to grips with the overall core mechanic. Free from action point dilemmas, it’s actually quite empowering once you understand your characters strengths and weaknesses. The long range of the snipers is superb. Using their unique skill set is vital, placing them on the periphery of the map, free from danger, they can pick off foes who unwittingly cross their field of vision. This leaves your others members to act as a dynamic swat team with breach and clear tactics. This methodical approach was hugely satisfying and works well for most of the missions I tried. The AI is challenging and the difficulty level might put off newbies to the genre. I’ve yet to complete any mission without losing a team member. 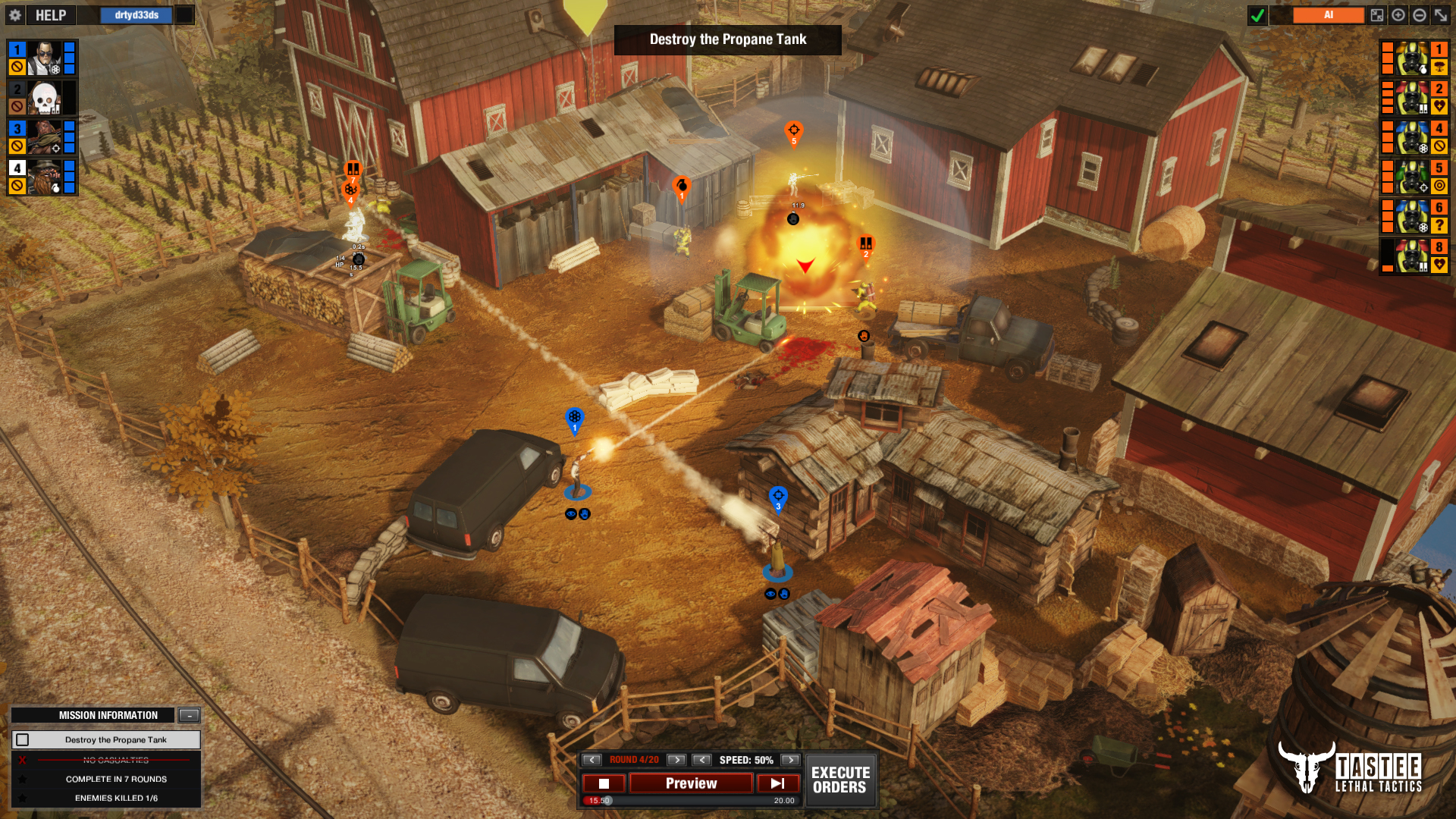 TLT does away with the usual tactical gameplay found in titles such as X-Com. Which rely on action points and two-phase techniques. It’s more akin to a fully realized Frozen Synapse game in 3D. Whilst in game, you can have each one of your mercs execute a variety of actions. You can stack actions to a waypoint or node. Each one can affect movement speed and your characters ability to respond to enemies in your field of view. Here is a list of all them

Move: Double-click on the ground to create a path and set a waypoint to where you want your merc to move. You can set additional waypoints within paths to set up additional actions. Each waypoint can be moved with click and drag. You can delete a waypoint with the Backspace key or by right-clicking it and selecting delete waypoint. You can still shoot while you walk, but your aiming time will be slower.

Look: Have your character face a direction at all times, either while moving or idle. The unit will move slower but will be more accurate.

Hold On sight: Your character will stop and aim as soon as they see an enemy, reducing aiming time. In exchange, your merc will move slower while this command is active.

Sprint: Run fast, cover longer distances or escape from certain death.  Mercs can’t shoot whilst sprinting. Make sure you are covered by teammates before you pull off this high-risk manoeuvre.

Free-fire: You can command your characters to shoot a specific point without having to aim. This is a great way to open doors and kick ass.

Wait: The perfect tool for whenever your timing needs to be extra precise. Great for cleaning up when a heavy has unleashed a grenade salvo. 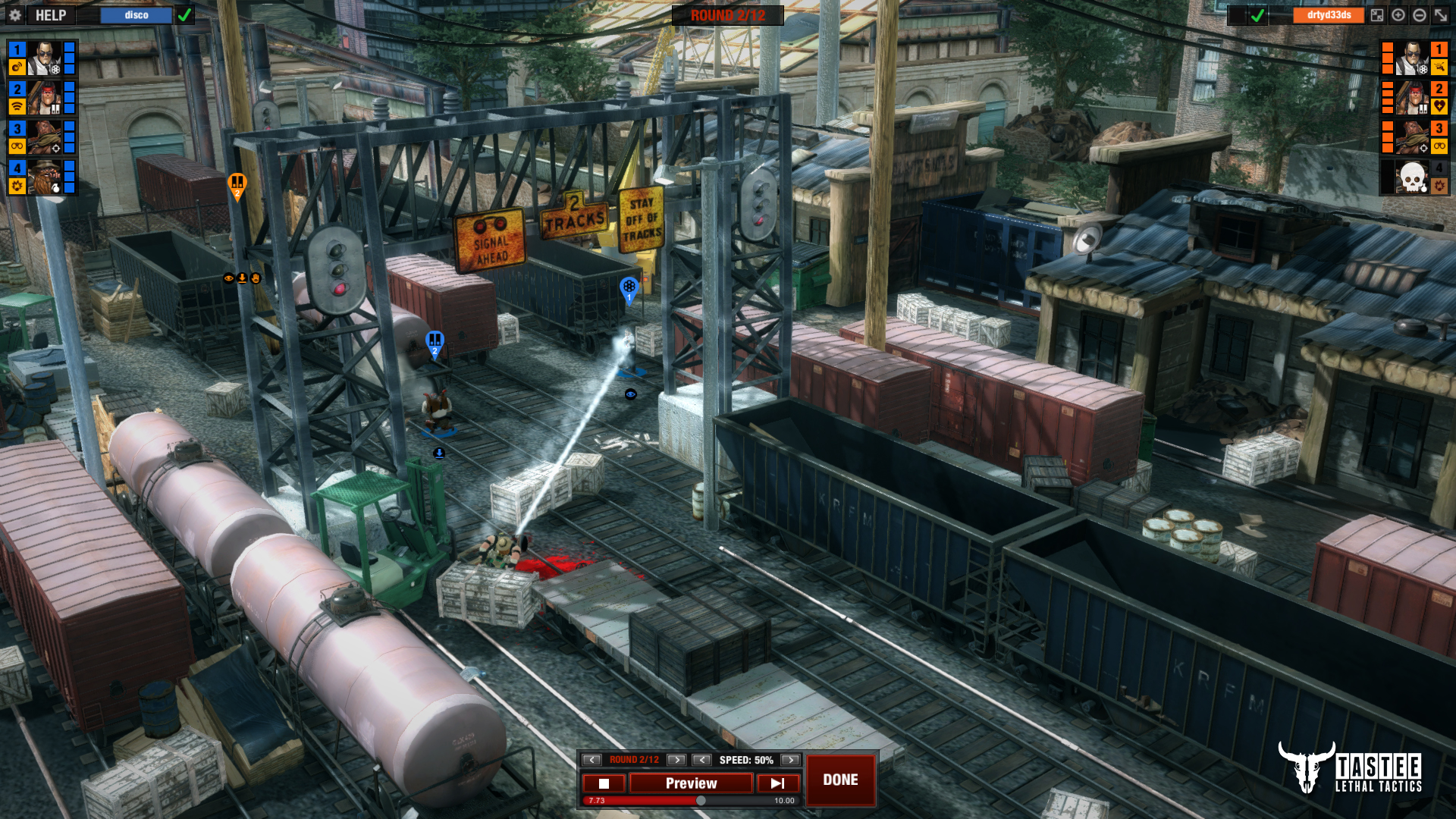 The replay feature at the end of the mission screen is a fantastic insight into where you went wrong. It clearly shows the sneaky AI path for foes you failed to recon. This adds a Monday night football like video analyst aspect to the game. Every one of the 12 rounds (player moves) can be scrutinized to the finest detail. Riveting viewing for a nerd like me.

Tactical gunplay has never felt so good.It’s almost like the game has been put through the lens of John Woo and the Wachowskis brothers. All that is missing are the doves. Bullet tracers and grenade pyrotechnics reveal a cinematic beauty. Captured in the moment. Every frame of carnage can be admired from any angle, range, and height.

The textures aren’t of the highest quality but they are serviceable.  They do the job of transporting you into a gritty tactical arena. There is  a good mixture or rural, shanty town and industrial settings. The railyard is a particular standout with great use of gray, blue and petrochemical red rolling stock. 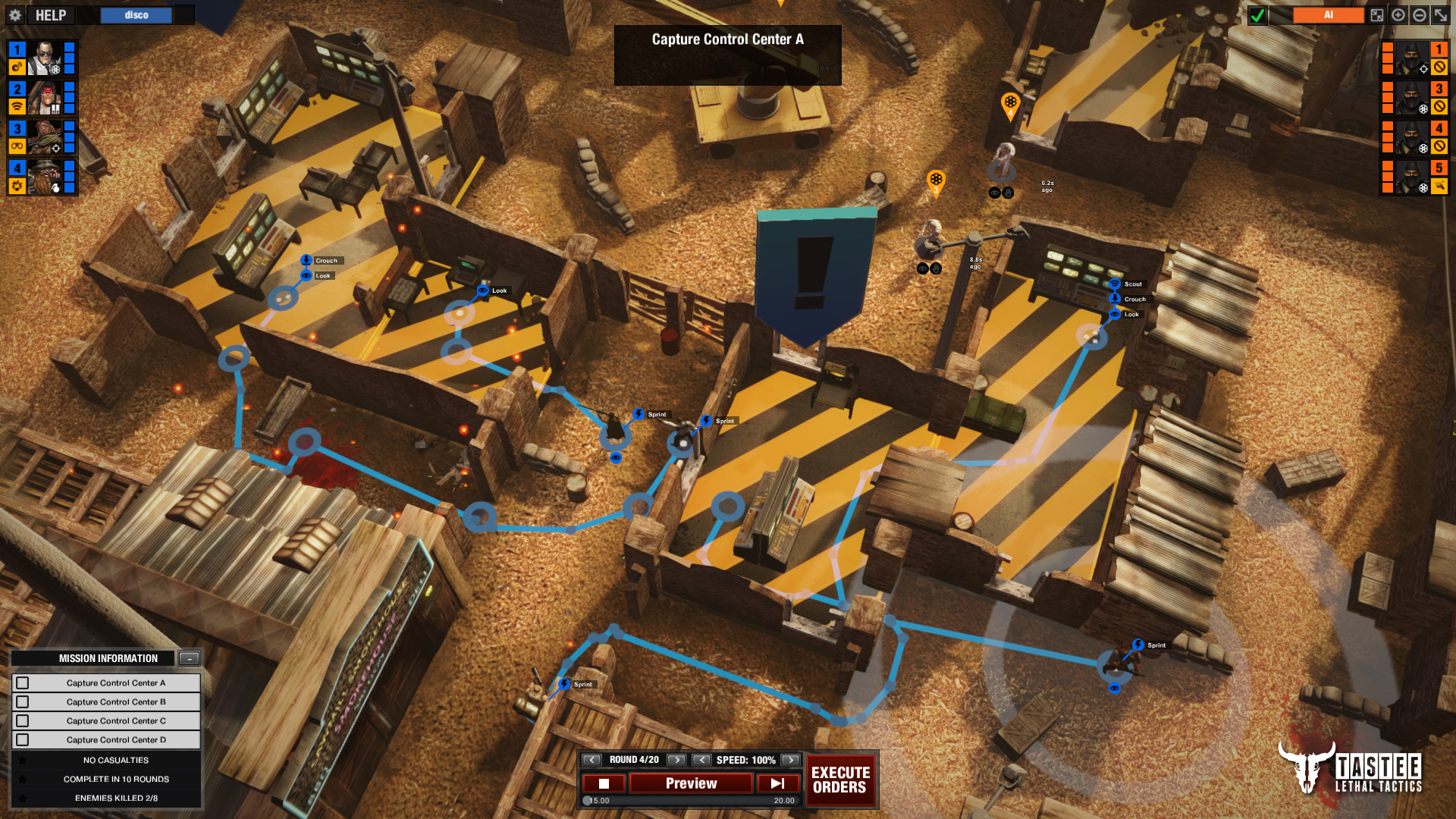 The main menu theme sounds like ZZ Top swamp blues, all note slides and fragile (The XX-ish) top lines. It has a smoky, late-night bar feel that I dig a lot. Each arena has the appropriate flavor soundtrack accompaniment. Rural setting meld with crossroads style blues, pedal steel guitar riffs and licks, being the order of the day.

Some of the sound effects feel like they have been lifted straight from a Sergio Leone western. Water towers creak and moan on maps with a dust bowl aesthetic. A Late night cicada chorus gives a deserted graveyard a subtle extra creepy ambiance. It’s good foley work in general.

TLT has many things goings for it. The gameplay is tight and very engaging. There’s a whole heap of content with the daily missions, practice(skirmish) mode, and various multiplayer options. But it’s not without its flaws, of which there are many. There is no mid-game save option for the campaign, which is inexcusable for a deep tactical title. Missions can take up to an hour to complete if you are of a methodical bent. People leave busy lives and to commit fully to a game without interruption is unreasonable in this day and age. There is also no support for a gamepad or re-bindable keys. The graphics options are bare bones, offering no advanced tweaks to tailor the game to your system’s capabilities. All these issues could be addressed and I’m surprised, given that the base game came out in May of last year, they have not yet been tackled by the developer.

Tastee is a hardcore tactical game which pulls no punches. If you are in the market for a different spin on the usual Xcom core gameplay and were put off by Frozen Synapse ‘s stark aesthetic, then it might be right in your wheelhouse. The game offers a rich suite of characters to choose from, all with interesting, unique and well-implemented abilities. Finding the right blend to meld the perfect fighting unit is hugely rewarding and offers many hours of deep tactical goodness. It’s not for the faint-hearted, the AI is brutal and unrelenting. But for those willing to dive into its menu, it’s a dirty burger any diner would be proud to serve up.