Trapped in a lucid dream, you have to find your way out of this surreal world which offers casual puzzles in an interesting world that is a joy to explore.

I have always been a sucker for everything surreal and dream-like in games and in movies. These environments offer so much more to find and to look at than those that strive for a more realistic look. Granted, standing on a huge mountain looking down is a joy to the eye, but I still personally like more games such as Dream Stone, their worlds are full of surprises.

We all know it’s hard to run in your dreams, here it seems jumping is the hard part here. It’s a strange movement. You jump up and go a bit backward, then a little bit up and forward. The first few jumps that I made caught me by surprise until I adapted to the mechanic. Actually, I don’t know if it is intended as a mechanic since we are in a dream or perhaps it is just a bug. It’s a bit clunky, the jumping puzzles aren’t really smooth or fun because of it. Otherwise, the movement is precise, just a bit slow at first before we find enough of those strange white balls scattered around the dream sequences that increase our moving speed to a tolerable level. But this isn’t a fast-paced game at all, even the jumping puzzles we encounter are pretty… easygoing. Combine that with the decent graphics and soothing piano soundtrack here and there, and you get a relaxing game in an interesting environment, that (at least for me) unwinded me a bit after a busy day at work. 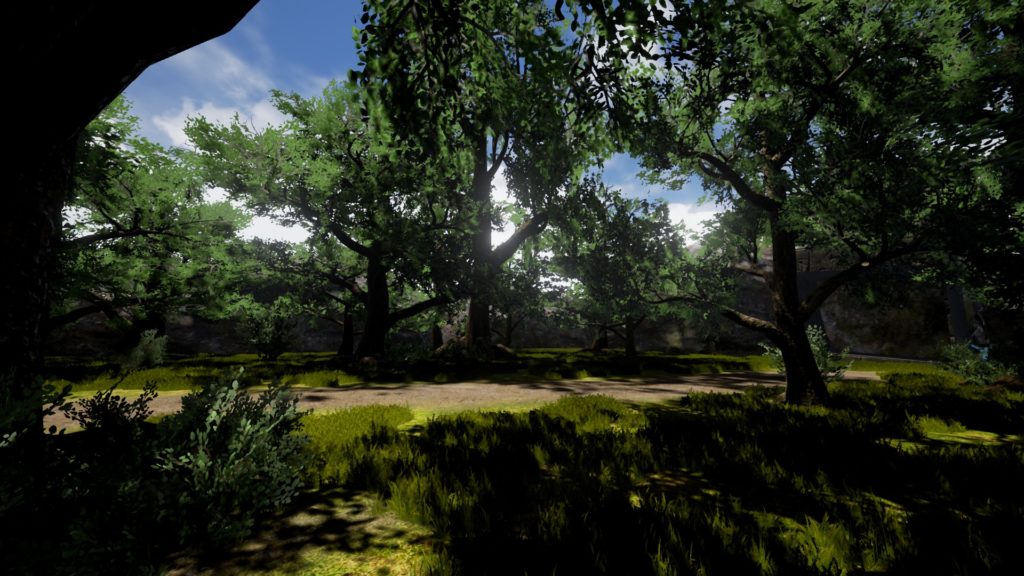 The dreams that the player is experiencing are diverse, short but interesting areas that each feature a unique puzzle.  These are accessed by the central hub and are free to complete in any order you wish. Puzzles are a bit misleading as a description since there was only one traditional puzzle where you had to think. I won’t spoil the other main attractions of the areas, but there isn’t much brain work required in this game. It fits the casual atmosphere the game has, but then again, dreams would offer a playground for great puzzles since everything is possible in dreams without the suspension of disbelief. The locations take great note in this fact, and I loved to explore them. It is linear, but I didn’t have a clue what to expect on the first playthrough. It’s a shame that the areas are short, as is the game in general. It’s a 1,5-hour adventure max, even if you take your time like I did.

There are a few spots that were well executed and stayed in my mind after completing the game: After the castle door is opened and you have to descend into the darkness, or if I missed a ledge by mere millimeters on a jump. Thinking how you should have jumped a half a second later to reach the ledge while falling down, longer than usual without dying, and then noticing you weren’t meant to succeed the jump. Some moments like that managed to surprise me positively.

I didn’t encounter any game-breaking bugs, rather, just annoying ones. Like a massive “OPEN (E)” text just staying in the middle the screen until quitting the game, as you can see in the gameplay video. Another noteworthy thing that seemed odd is that you can’t start a new game until you have finished the game when it automatically starts again. There isn’t an option to do that, also the saving is fixed at the beginning of each dream. There are save points along the way, but quitting the game and then coming back returns you to the start of the level. I couldn’t find a setting to adjust the music volume which is a big shame since that piano track was great. Perhaps it was meant to be heard faintly in the background. A functional effect, but I wouldn’t mind having a chance to hear it properly without turning my speakers to the max, and forgetting them there until I click play on Spotify. Minor graphical glitches were also present throughout the game like the background leaking through corners and the sudden changes in the environment just hit me in the face. Like the whole sky just turning into a different color instead of gradually changing as you get closer to the portal. This is an indie game, so things like that are forgiven, but it doesn’t change the fact it’s still a noticeable flaw and something that takes away a bit from the enjoyment.

No. It’s 3 euros on steam at the time of writing and even though I had fun with this game and enjoyed exploring it, I don’t see it really is worth the money. It’s extremely short, no replay value or challenge and small linear levels. it’s a fun game, but just not worth really to buy on its own, as a part of a bundle. then yes! do grab it!