A solid, polished resource management game with VR support and cuteness off the charts!

Each level consists of a small island which starts off all brown and barren. A blue egg drops from the sky and out pops a Peep, a little elfin guy with baby eyes ready to do your bidding. The first thing you do is tell him to unlock the Totem, which is the main focus point of the game where you reap Spirit Energy, promote Peeps into tradesmen and heroes, and where your Peeps go to drop off the resources they collect. Before long another egg lands and you send your first Peep to sit on it and hatch another Peep. As your team of Peeps grows larger the trick is to keep them all busy performing tasks. 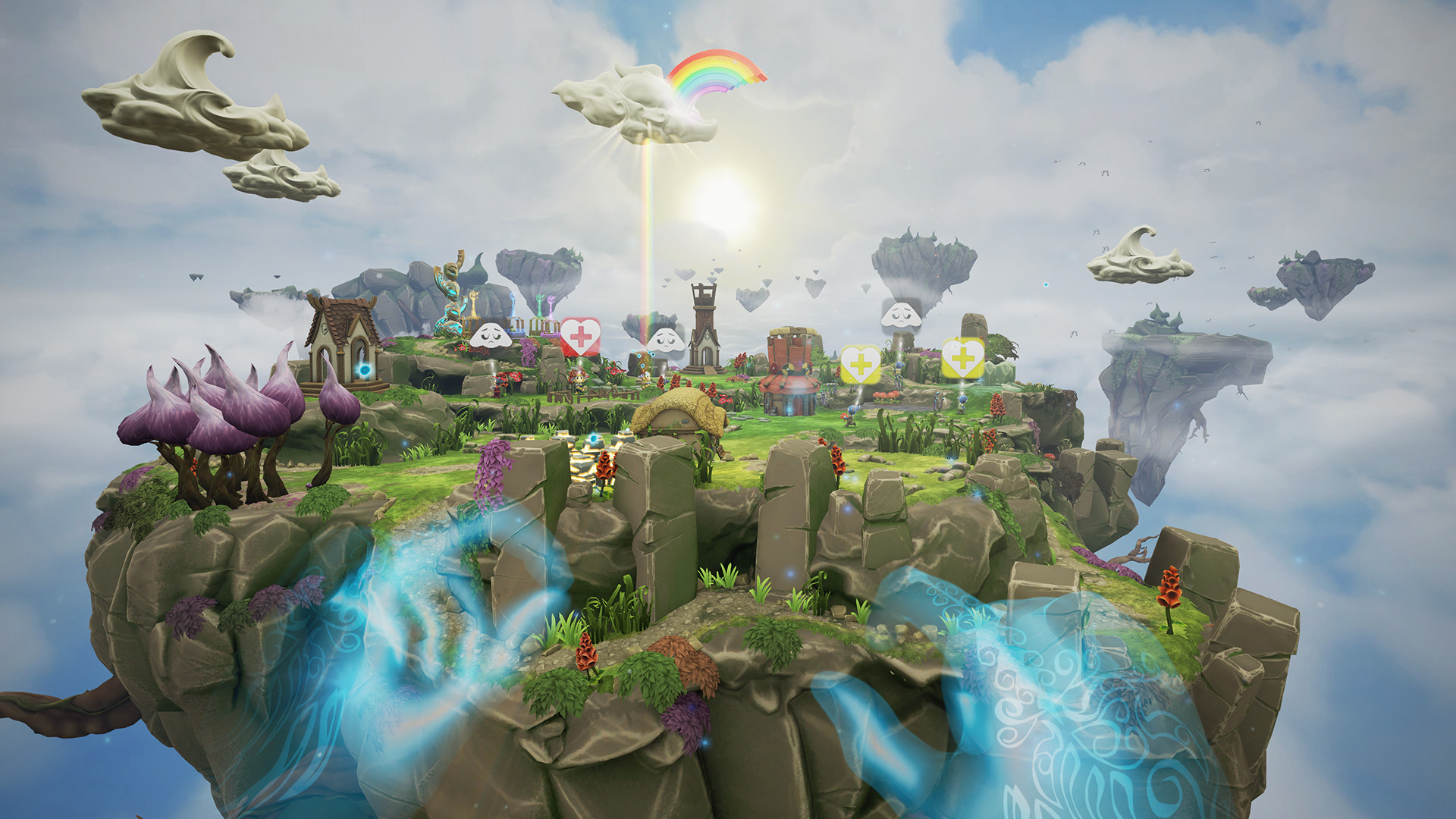 “Tether” refers to the way you have to select a Peep and drag the focus point to a place or item on the island to send him there and put him to work collecting resources, building/upgrading things and fighting Critters at night. There’s a day/night cycle so during daylight you focus on building, resource gathering and preparing defences for the night, during which you spend most of the time ordering your Peeps to fight the Critters that appear from everywhere and try to eat your resources.

The name of the game is to be constantly observant, as small artifacts appear which you use to unlock new abilities and buildings that help you to keep pace with the increasing difficulty of the events. As the level progresses, Spirit Energy appears briefly as a cloud of floating blue dots when Peeps pray or other events occur. The majority of this Spirit Energy appears at night as a result of your Peeps killing the Critters. You have to keep your eye out for it at all times and collect it as soon as you see it – it’s easy to be distracted and miss it, especially during the day. There’s a certain amount of Spirit Energy you have to collect in order to beat the level, so it’s the most important currency in the game. There are five types of resource: wood, stone, ore, food and crystal. The first three are used for constructing buildings which in turn boost your resources and Peeps in various ways. Food keeps your Peeps alive, obviously. Crystals are the solid version of Spirit Energy, so it’s very important to collect it as soon as it appears. The buildings all require different combinations of resources, so you have to manage your workforce in order to collect the resources that you need most. Before long you have Peeps wandering all over the place and you need your wits about you to follow who is doing what. Not-so-organised chaos with me in charge, I can tell you.

The final game mechanic is the weather elements, which you can use on resource fields and Peeps to boost them one way or another, or else you can use one weather cloud on another to produce rainbows and lightning to serve various purposes. And that’s the whole game more or less covered. Thirteen different islands and a set of game mechanics that’s effective but compact.

There’s no storyline at all, which is surprising for a game that’s built around cute little characters. Personally I don’t mind at all because nothing irritates me more than a half-arsed story shoehorned into a game just because they feel they have to do it. Stories should be done properly or not at all, so in this case not at all is fine by me. 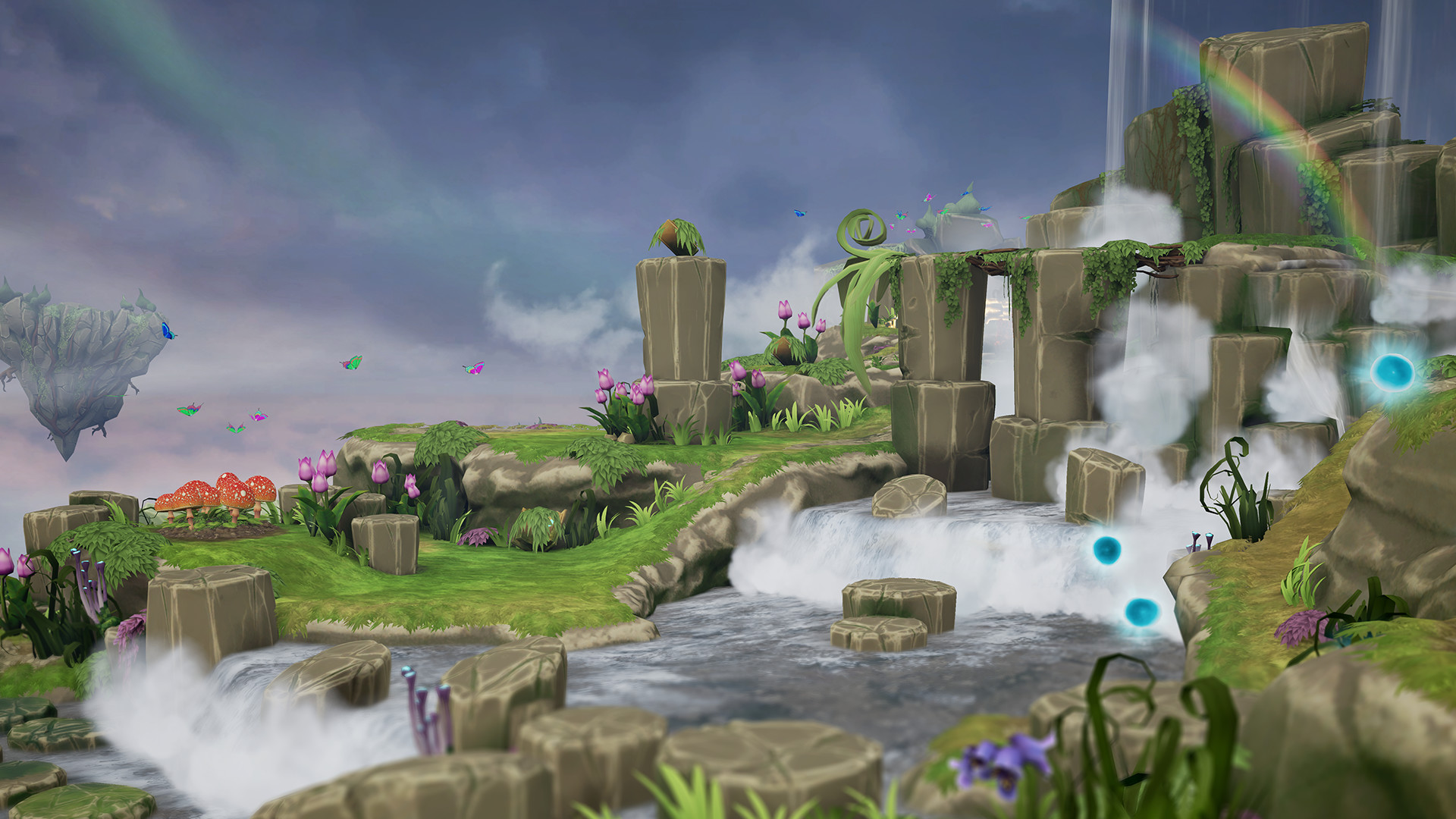 The visuals are gorgeous, it has to be said. Great use of colour and glowing objects that really pop. The background music has a celtic vibe that makes me think of leprechauns, it suits the mood perfectly. On the down side, I played without VR and to look around I had to select various clouds to change my viewpoint from a limited number of fixed positions. It kind of does the job, but I often found myself straining to see what was going on in the distance and having to keep switching viewpoints constantly, adding to the confusion. It just feels awkward. I’ve watched the store page video and it’s clear to see that this game was made for VR, you can zoom in and out and glide your view to exactly where you want it, it looks far easier and more natural that way.

I should point out that these images you see here are taken from the store page and they show close-up shots of the game with lovely scenery and the faces of Peeps. These images are entirely impossible to produce without VR. I’ve only ever seen these scenes from further away, which puts me at a disadvantage because there are small objects such as artifacts and faces carved into rocks that are very difficult to spot without the ability to zoom in.

One thing I want to mention in this section is the dying. When things get away from you and you start to lose control, your Peeps start to starve and go into “Dismay” mode. They all start making this sound like a room full of baby ghosts, that’s the only way I can describe it, and they they all start jumping off the edge of the island. I’m a grown man and I found it very disturbing. I’m serious. It’s creepy. 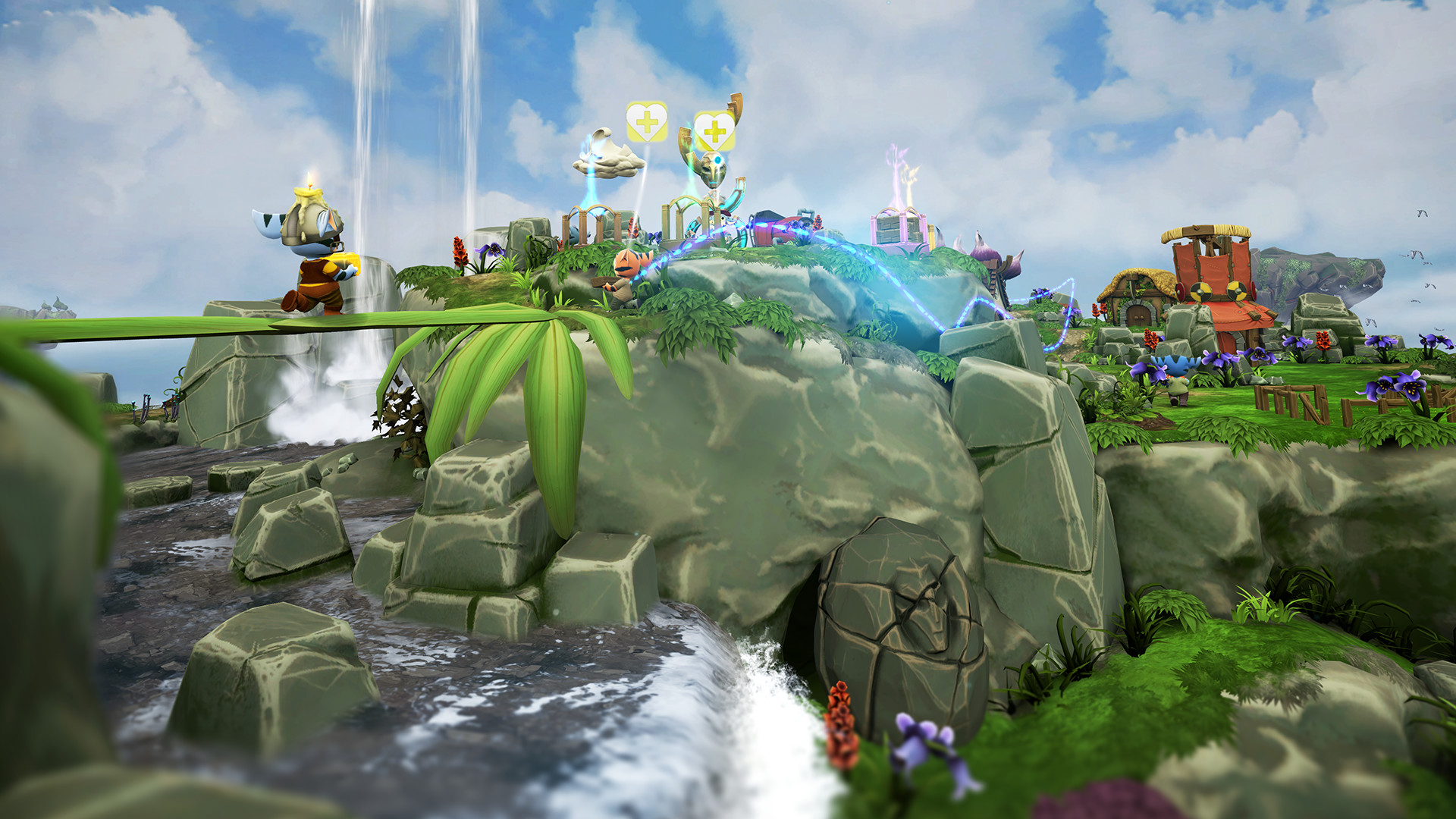 On the face of it, the gameplay mechanics are fairly straightforward. It looks like it should be easy, but it’s not. You really need to keep your wits about you and employ some serious multitasking skills. Even on the early levels you’re already dealing with upwards of a dozen Peeps wandering all over the place. In theory you should try to minimise their walking distances by making them do things that are nearby, but that’s easier said than done. It’s like “hey, I need some stone, let’s send any peeps I can get hold of” and then I end up with Peeps walking further than they need to, just because I can’t keep tabs on it all with the island swarming with Peeps. Then they start making that awful keening sound and I know my goose is cooked.

So don’t be fooled by the cuteness, there’s plenty of challenge here. 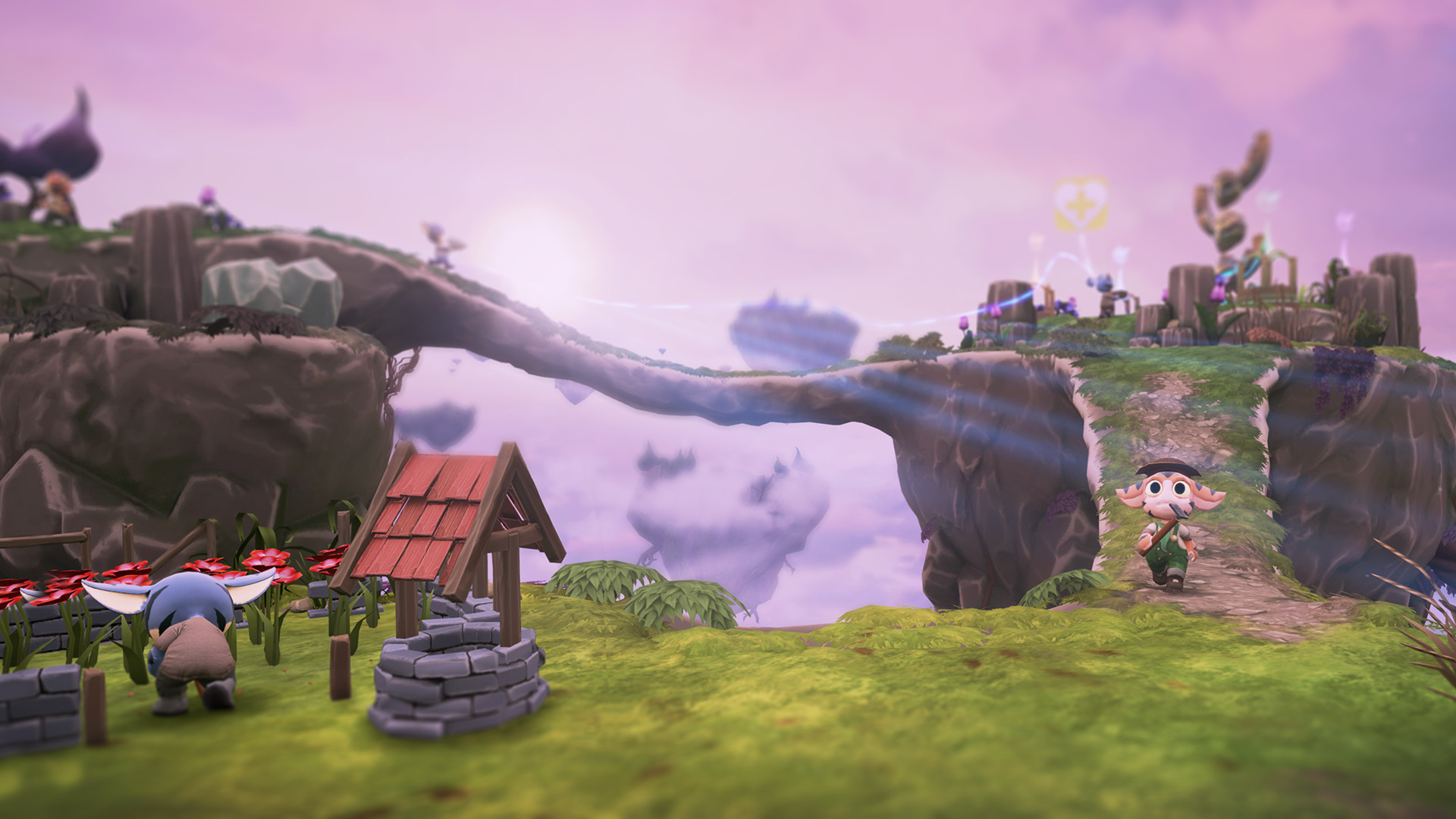 The graphics, quality and overall polish of the game can’t be faulted. If you’re the type of gamer who likes to ‘master’ a game, become an expert at a specific type of gameplay and compete against others then it might be worth shelling out the rather hefty price tag. If I had a VR headset then yes, I think I would be tempted to pay full price. However, as a non-VR player who prefers discovering fresh content throughout a game, I would only consider this with a heavy discount because it quickly becomes ‘samey’.

Tethered is very well put together and is an enjoyable experience up to a point. The problem is that it lacks scope and variety. It does keep you busy and there’s a lot to think about but once you’ve played the tutorial level you’ve seen nearly all of what the game has to offer. Nothing new or surprising ever emerges, it’s just repeating the same thing with increasing intensity and trying to improve your scores. If you’re into leaderboards then this is the game for you, otherwise you’re likely to get bored pretty soon.