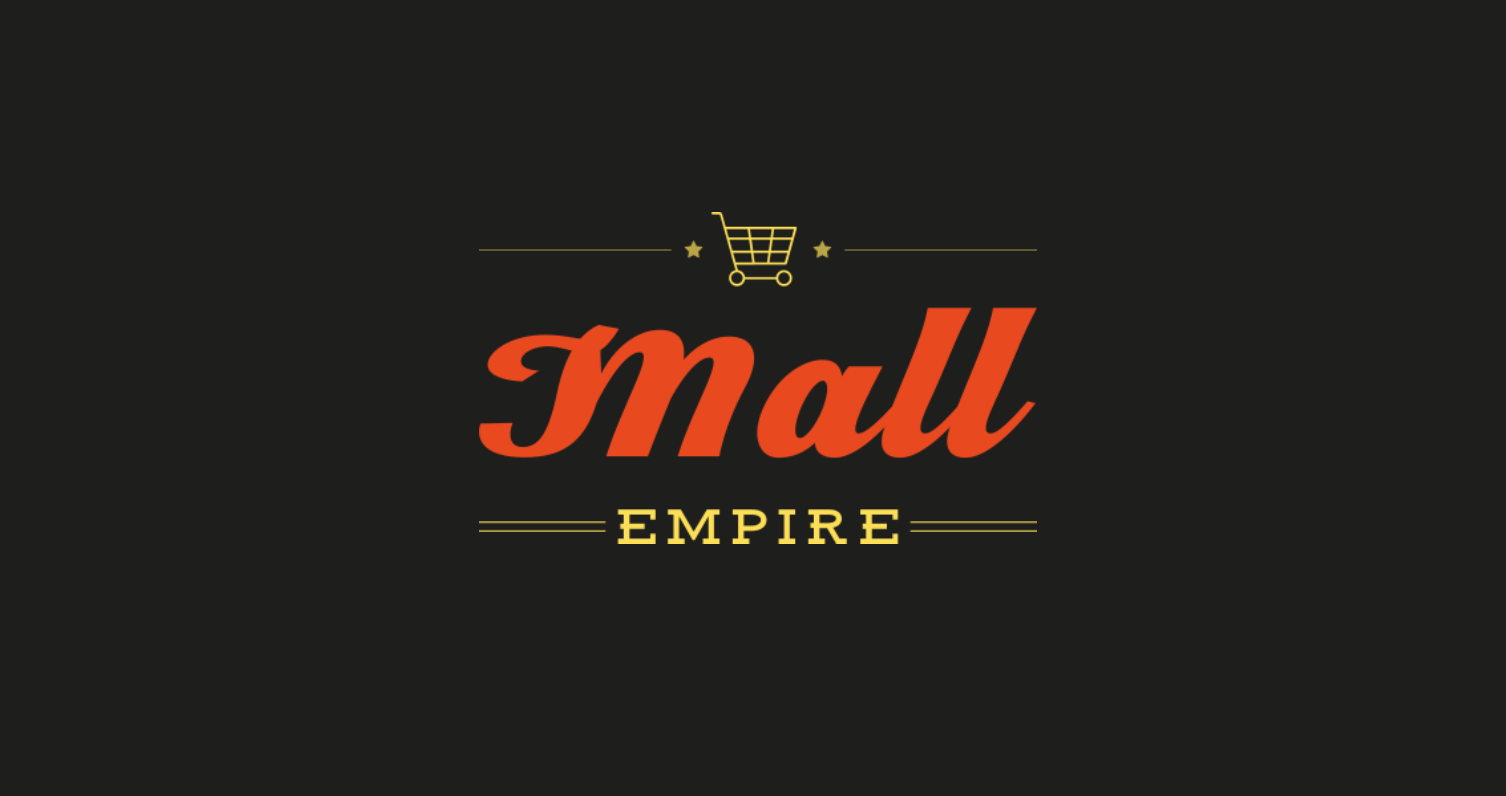 Mall Empire is a seemingly attractive indie strategy/management game which is entertaining for a while but is unfortunately full of flaws that don’t let the game live up to its full potential.

This game tries to mimic similar successful titles, Project Highrise being just one example. Your goal is to get as much money as possible by building a shopping mall and evolving it as you get more customers and more money.

The concept is fun and the game looks like fun at first but soon enough, it becomes obvious that there are countless problems that ruin the whole experience. Let’s start at the beginning. As soon as I started the game … it crashed. “No problem,” I said to myself. “this can happen sometimes.” Sure enough, the game started normally next time. However, a few hours later I started browsing the community forum and it seems like this has been happening to a whole bunch of people. I tried starting the game multiple times and it still crashes about 20% of the time for some reason.

The tutorial is somehow helpful, but it is sadly filled with grammatical errors, typos, and other things. Here’s an example: “If you will upgrade stock, then your store will can to sell more products.” Luckily, the tutorial is more or less the only thing you will have to read in this game.

The graphics are overall quite good-looking. The main menu is beautiful, the stores and the environment are also okay. The animations don’t quite hit the spot, though. People buy things like this: 1. walk to the store, 2. touch the store for a millisecond and 3. walk away immediately. You don’t see people spending their time around the mall and shopping like they’re supposed to. They just come and go and they’re not particularly slow at doing that. Another animation issue is the lack of the day-turning-to-night-and-vice-versa transition animation. When the daytime “times out”, the bright background instantly switches into the dark one.

Since I’m already talking about time, here’s another thing I noticed. I’m sure you know that all similar management games have time control buttons which allow you to speed up the time to ensure you can waste your whole weekend more effectively. This game has that too, but that is not the problem. The problem is the pause button. When you pause it, the time stops – no surprise there. However, when you resume the game, the time doesn’t start running normally, it just fast forwards to the time the game would reach had the pause button not been pressed. “But that’s good,” I hear you say, “at least the game got you plenty of money in the meantime and you don’t have to take loans and stuff!” Well, no. You see, although you lose a lot of in-game time, your other stats don’t actually change. In that time, no customers arrived and entrusted you with their hard-earned money.

There is another issue regarding time in this game, but it invokes giggles instead of rage. One in-game day lasts two minutes in real life and progresses the in-game clock by one week. For some reason. I don’t understand what is the point of having the day and night cycle if you’re not gonna stick by it. 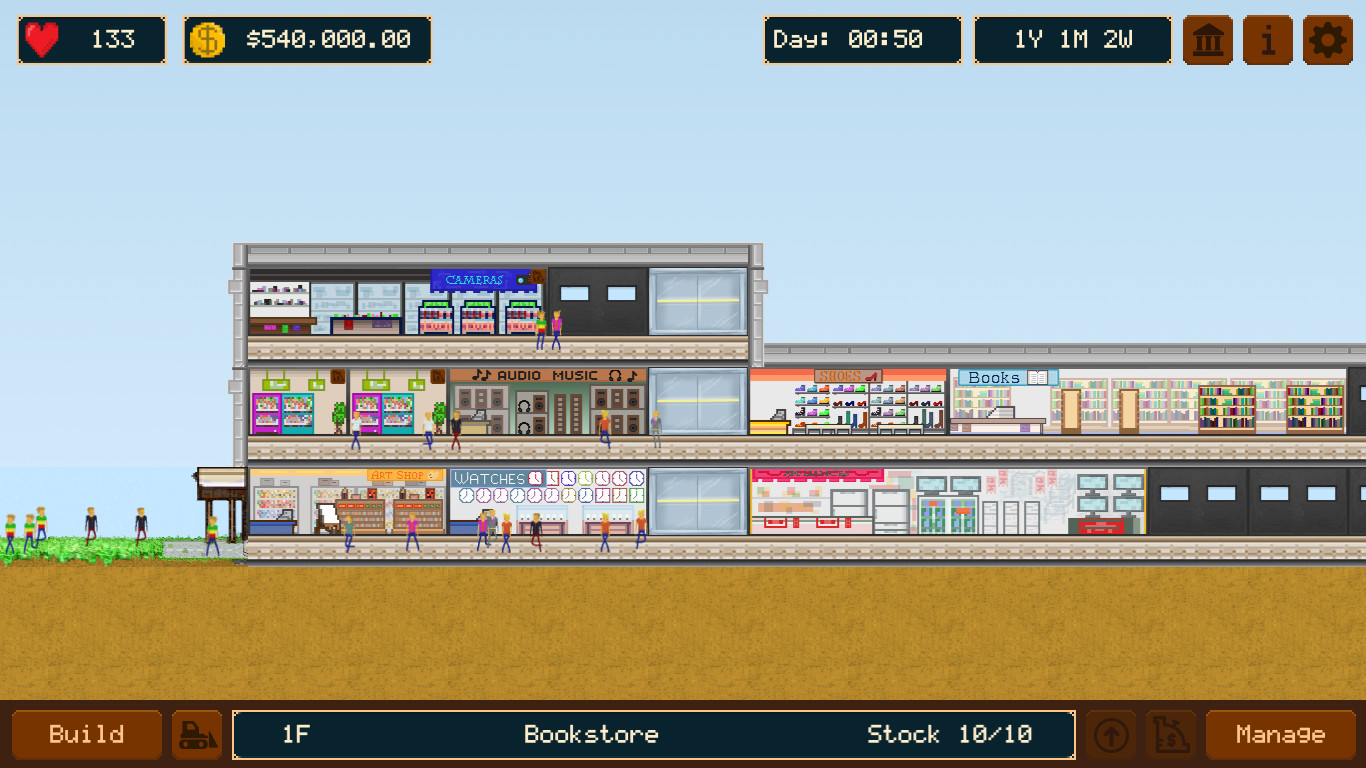 The issues do not end here, sadly. I really can’t understand why I have to collect money myself. Every once in a while, a certain store will inform you that it is now time to collect the money and that you have 30 seconds to do so. No other similar game does this and it’s for a good reason: it’s annoying and it’s dumb. Also, as you get visited by your beloved customers, you earn the so-called “rating”, which is a sort of customer satisfaction. You can then spend the rating (goodbye, logic) to buy store blueprints.

This game also features a store upgrade system, which allows you to, you guessed it, upgrade your stores. This sounds good and it is, in fact, crucial if you want to succeed in this game. Why? Because without the upgrades, some stores have as little as FIVE pieces of their product in stock. “Want to buy some bread, buddy? Well, that’s bad luck, five people came before you already.” Ridiculous. And that’s not the only weird thing with Mall Empire’s stock system. Even restrooms and parks are limited in how many people they can serve per day.

This weird system brings up a very interesting question: how on earth do you earn any money if you can only sell five loaves of bread per day? Here’s the obvious solution: you raise its damn price. I had a nice long laugh after I noticed something when I upgraded the restrooms: a single usage of the toilet brought me fifteen hundred dollars. Those better be some gold-plated toilets for that price.

The controls are no better, too. You can’t zoom in or out, which can be a problem once your establishment consists of more than five floors. Moving the camera with your mouse for some reason also lags the customers (the FPS did not drop one bit, however) while the time counter ticks down seconds like usual, which in theory reduces your daily profits. When placing stores into your mall, you may also have issues with stores that take up more space. When I was trying to place the bar, I somehow placed it over some of the existing infrastructures. This prevented me from collecting money from the covered up areas. I could destroy the bar in order to reveal the stores beneath, but I would lose $350k (this game does not refund your money when you destroy stores. Of course.). 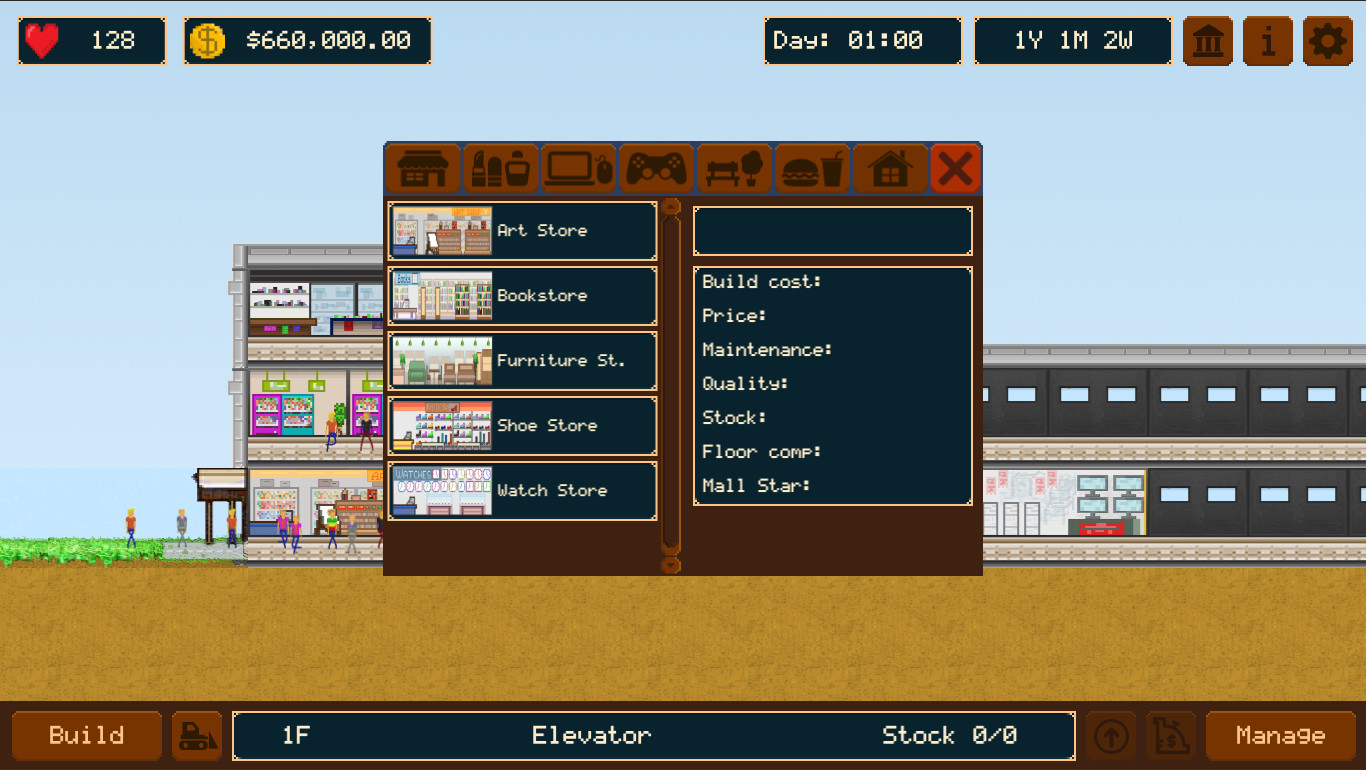 I do also want to say that I love the music in this game. It’s funky.

There are a lot of things that make this game bad, but for some weird enough reason, I still played it for about two hours straight. I couldn’t stop. Do I recommend it? Not really, no. This is the poor man’s version of Project Highrise and I do mean poor man’s. Both games go on sale quite often and if you feel like managing some buildings, you should only buy this game if you’re a bit desperate and you’re as broke as you’ll ever be. I’m not saying you won’t enjoy this game – for a few hours, you probably will. I did. But still, do yourself a favor and buy some other game with a decent level of quality.