The open-world of Conan Exiles has just been expanded to a vast extent, and the new mechanics make it much more challenging.

Conan Exiles is an open-world survival game set in the brutal lands of Conan the Barbarian. In Conan Exiles, players are exiled from their previous land by petty crimes, and sentenced to death, only to be freed and forced to say within a dangerous confined area, where survival of the fittest dictates the rule. SaveOrQuit has previously reviewed the base game, and this article will solely cover the new Frozen North expansion, a major update that added a lot of content to Conan Exiles, bringing new areas, creatures, and challenges. For those interested in reading a review on the base game, I highly recommended it if it’s the first time reading about Conan Exiles, it’s available for reading here. 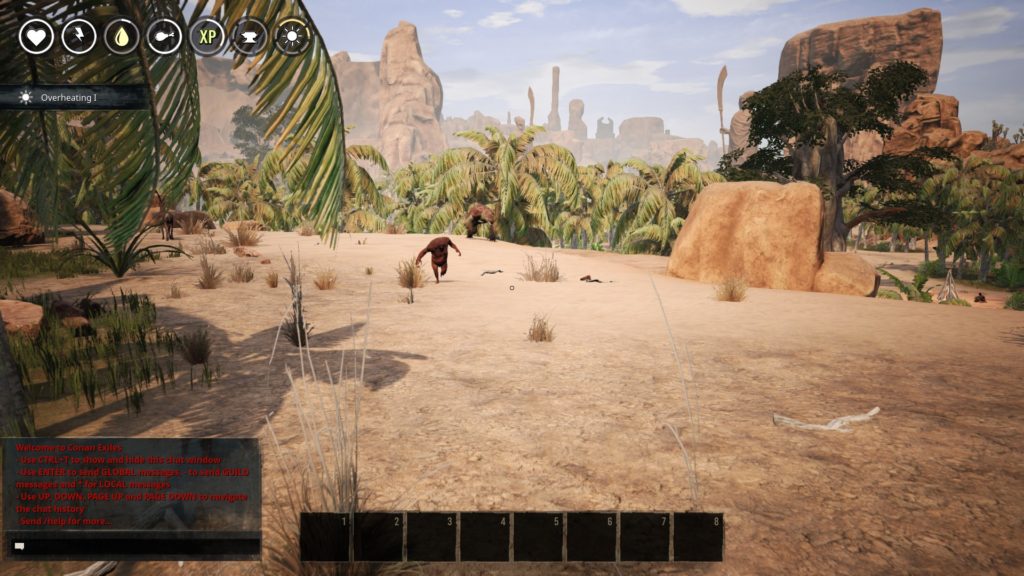 The already impressive world of Conan Exiles was enjoyable for many, and it managed to keep a relatively high number of people playing for a long period of time. A problem that plagues MMORPGs is a lack of a player base, as they diminish as time go by, and while Conan Exiles wasn’t different, it wasn’t affected very badly as it keeps a healthy player base, even though it’s not like it was back during its initial launch.  Conan Exiles had an average player base of 1826 players in The Last 30 Days, according to SteamCharts. Part of it could be due to the amazing, brand-new update, Frozen North, given there was a +16.3% gain in comparison to July. Not a surprise, given how massive the update was.

Update 29, also known as The Frozen North, was released on August 16th, including substantial changes to Conan Exiles, and while most were bug fixes and small tweaks, The Frozen North is the biggest update released for Conan Exiles so far.  In fact, there is so much new content that it could be considered a completely new game. Funcom, the development team behind Conan Exiles, estimates the in-game content was expanded by an impressive 70%, adding new areas, enemies, mechanics and expanding religion further. 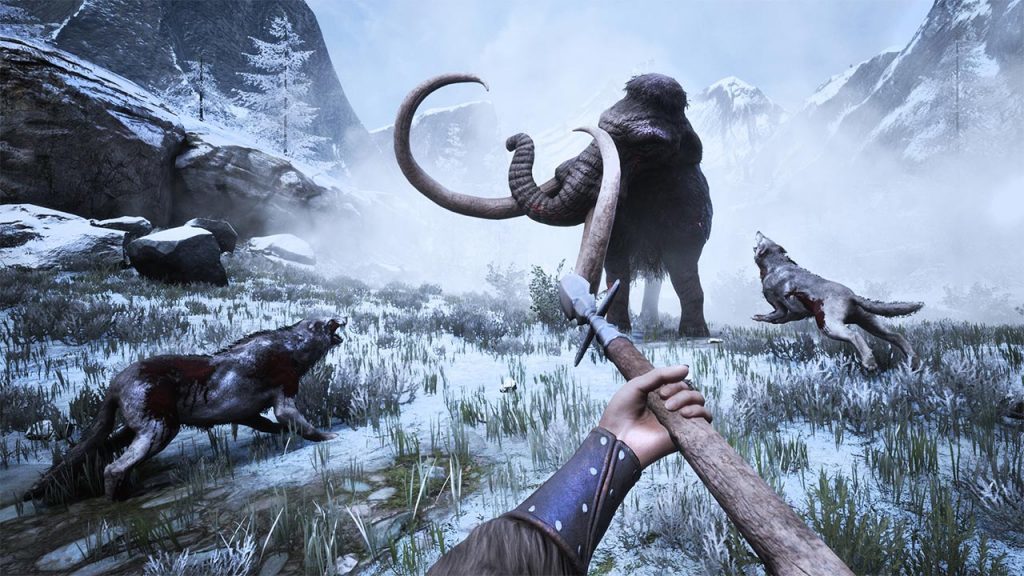 While the main objective of the base game was to survive a desert plagued by Exiles and hostile wildlife, The Frozen North acts differently, with incentives for exploration and discovery, it adds new dungeons to delve into and human settlements to visit and conquer. Not only that, new landscapes bring in new challenges, as The Frozen North is much less welcoming due to the harsh snowy weather, and it will prove to be a complicated adversary even to most skilled Exile. The recent changes to Conan Exiles‘ weather bring in a fresh challenge to Exiles skilled in masonry, as shelters not only have to be safe and protect from the hazardous environment, they now have to be cozy. 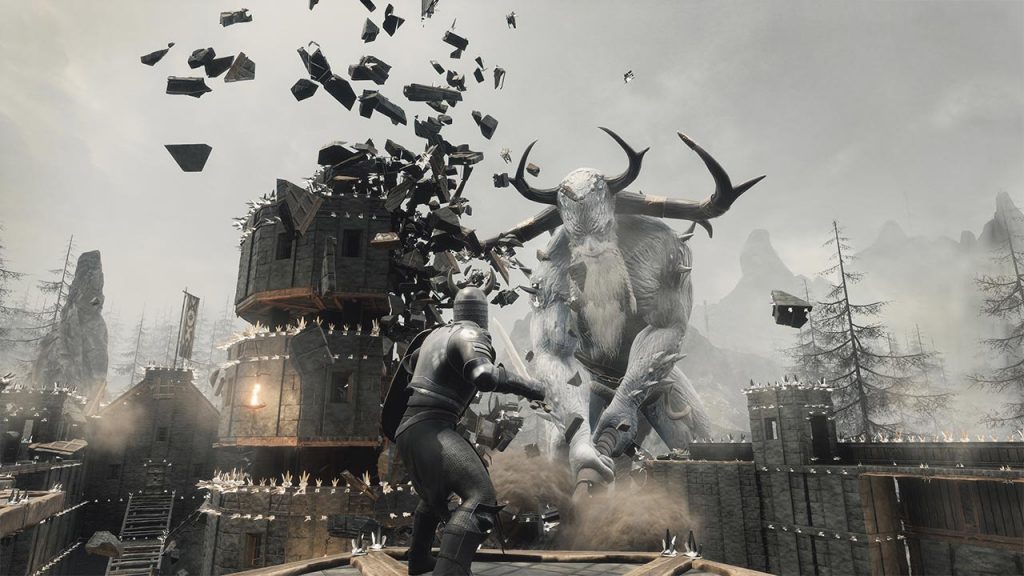 The religious element of Conan Exiles has been topped up a notch with the addition of a new deity, fitting the new world to explore. For those not familiar, the aspect of religion in Conan Exiles can be a blessing or a curse, as a benevolent God might be inclined to provide help, but what will it ask in return? The Frozen North expansion added a God that goes by the name of Ymir, the deity of the northern tribes. 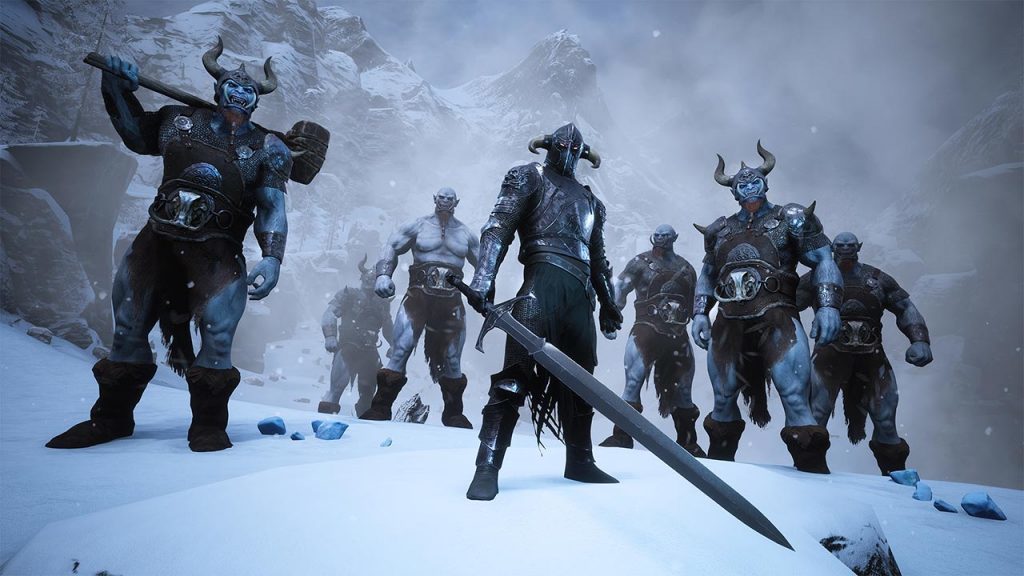 The much colder environment of Frozen North brings also new enemies. Frost Giants will be on the lookout for a hearty meal and hungry wolves won’t have mercy on a lone exile. Those new enemies add up to extra challenges, and it’s a good change of scenario to have new, fresh adversaries to fight against.

Exiles looking for a more homestead-focused adventure will be pleased to know that beekeeping is now possible! Beekeeping is an interesting new addition and makes it possible to sate hunger without leaving very far away from home. Not only that, but brewing and cooking, in general, were also upgraded. Exiles can brew multiple different drinks and beverages, and cook special meals. Having a bit of glamour in such a harsh survival world is good for sanity! 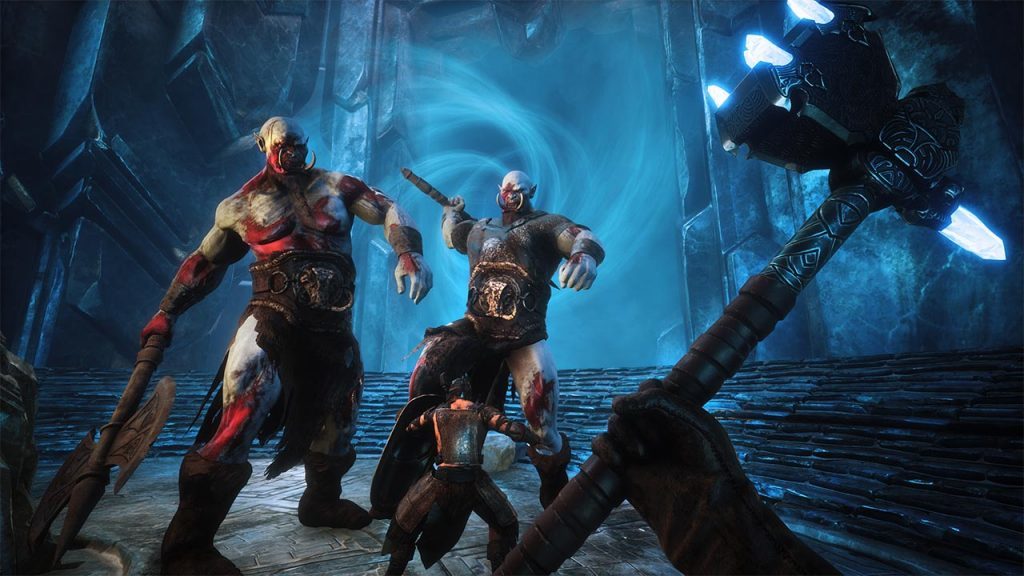 On top of all that, the base game had its improvements, too. The Frozen North update included tweaks for those looking to stay in the desert as well! Artificial Intelligence for human enemies has been improved, and combat should flow more smoothly with expanded armory and weaponry. Since the previous SaveOrQuit review, there were roughly 28 updates, adding much-requested features and modifications. It’s no doubt Conan Exiles is improving on itself, and The Frozen North expansion is a good opportunity to bring players back again for another try. 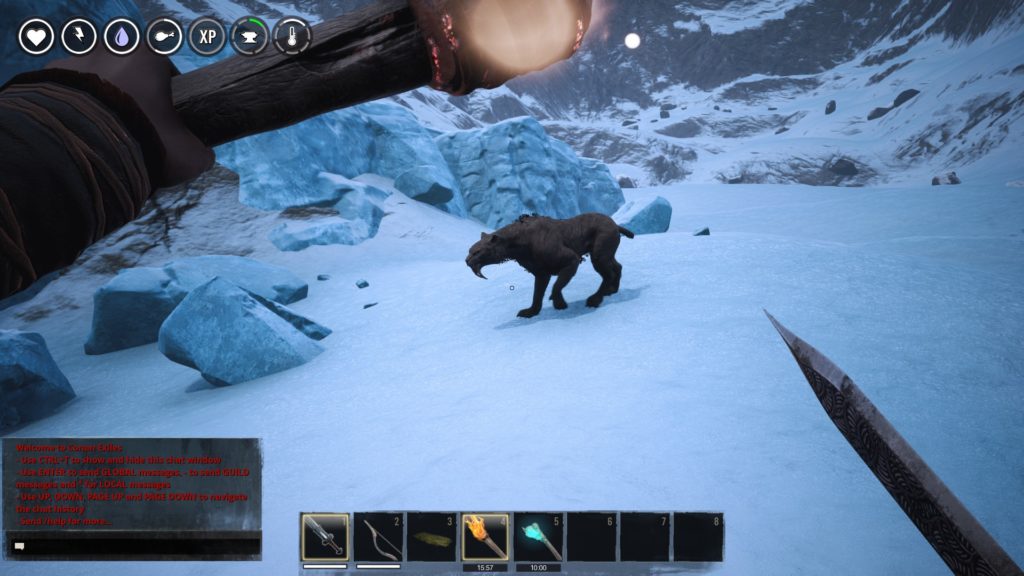 Although all of the new additions do sound good and interesting, how does one get to the area in The Frozen North? While there are no in-game instructions on that, getting to the Frozen North is as straightforward as going northwards, using the map as a guide. This is no easy task, and many predators wander in that area, and it is recommended to be somewhat late in-game before taking the path northwards. Consider that area as a post-base-game treat. As one draws closer to the Frozen North areas, it will be gradually clearer that grass is getting greener, and areas are getting snowier. Frostbite and other temperature dangers become a real problem from this point on, and it’s important to bring an extra set of armor, specifically something made with fur, able to provide heat. 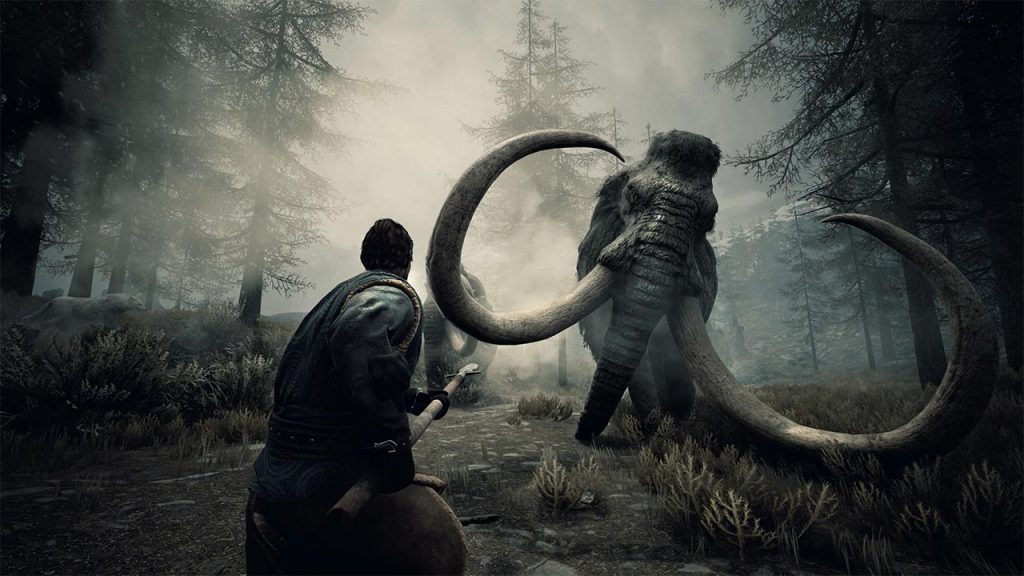 The wildlife of The Frozen North isn’t above the dangers of cold either, as furrier animals and creatures will be a common sight. In fact, one of the most interesting additions of was the extinct mammoth, an iconic creature usually associated with the Glacial age. The mammoth is an enormous animal, able to provide meat multiple times, and maybe even feed an entire tribe. It will be key in the journey of the Exile, as it’s a good source of food supplies.

Snow wolves appear more frequently when nearing The Frozen North entrance, and become a normal sight once in the actual territory. They will prove to be fierce enemies, as they can organize themselves in packs and hunt Exiles. On the other hand, they could make great home guards, in the hands of a wise Exile. 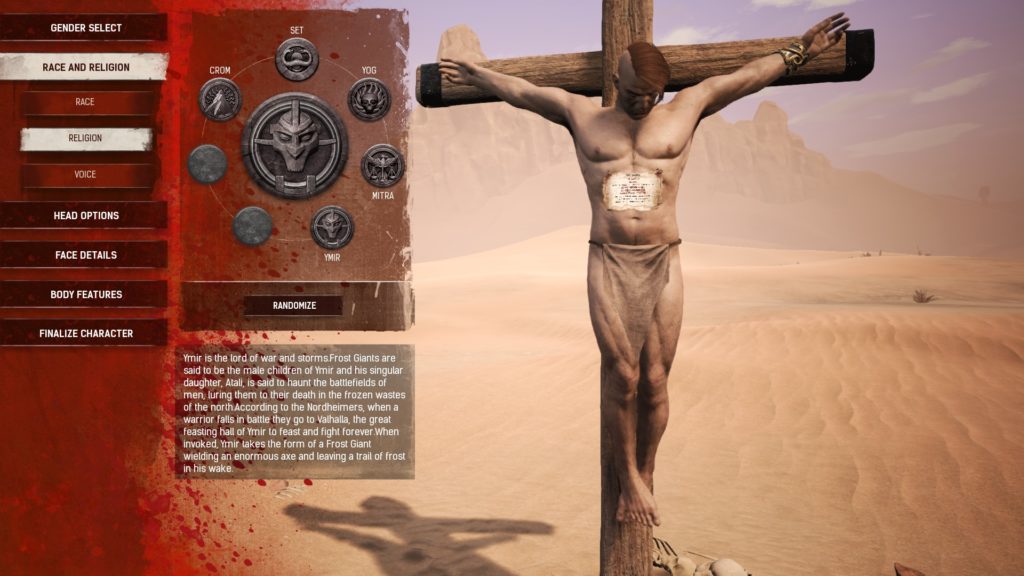 The religion system of Conan Exiles featured a set of deities from the start, but it was The Frozen North update that brought Ymir into play. Ymir is worshipped by savage tribes of Northmen, who take Ymir as their Lord of Storm and War.  Ymir is the lord of war and storms, and it’s said that Frozen Giants are his male children. Atali, his daughter, haunts the battlefields of men and lures them to their deaths in frozen wastes. According to Nordheimer culture, when a warrior falls in battle, they are sent to Valhalla, where they participate in a great feast with Ymir, to feast and fight forever. Sounds familiar? Yes, it does seem to be influenced heavily by Nordic culture, especially the mention of Valhalla as a feasting hall. Not only that, but Ymir is also the Lord of Storms, similar to Thor, part of the Nordic culture. Another interesting perk of Ymir isitss avatar. In Conan Exiles, Gods have their own avatars, manifestations of their power & will, which can be guided by the Exile, given enough progress in the way of priesthood. In this case, Ymir is a giant Frost Giant (twice!) that wields an enormous axe, capable of laying destruction to enemies of the savage tribes that worship him.

The already vast world of Conan Exiles has surely been improved for the better with The Frozen North expansion.  It has brought so much content it could have easily been a paid DLC, but it’s freely available to all Conan Exiles players. Those who already mastered the dangers of the desert will find this expansion a nice treat that furthers increase the life of the game, a welcoming thing for any MMORPG.

The last SaveOrQuit article about Conan Exiles was a preview, pointing the game was rough around the edges and a tad broken, but it’s fair to say the game has improved a lot since its release and would be worth checking out again. It’s a decent piece of survival, even though some community members claim the servers are still laggy and clunky, it’s possible to see through those pesky problems and enjoy.