While the vast majority of clicker games, games that have an idle element as the core foundation of the gameplay, tend to provide some sort of progression as an incentive to keep the player hooked, Vostok Inc. tries to add more to the genre.

Despite the fact that the game doesn’t really label itself as a clicker or an idling game, the core of the game is essentially based on that genre. Essentially, the idea behind the whole game is that you’re the CEO of Vostok Inc., a major corporation that has the goal of expanding across all known space and bringing the wonders of capitalism to everyone. In order to do so, you’ll be expanding your empire by building and upgrading infrastructures on several solar systems.

The game is played from a top-down perspective of space, piloting around your rather small spaceship. Initially, you use this to fly around destroying asteroids, killing enemies and picking up managers, executives and other staff in order to gain production bonuses and gain money. Afterwards, you’ll start using this money to upgrade and build different kinds of businesses in planets, such as mines, power plants, real estate, banks, shopping malls, restaurants, etc.. These will generate money over time, which you can pick up by flying to each planet or by building a satellite that automatically collects money for you. Honestly, getting those satellites up and running should be your number one priority, as going back and forth between planets can be quite boring, especially on systems in which planets are far off from each other. Besides that, the game eventually reaches a point in which going after enemies and asteroids doesn’t compensate, all you need to do is leave your game open and let the credits flow while you’re doing something else. This leads to one design decision that kind of bothered me, and that is the fact that you don’t get any money if your game is closed, unlike the vast majority of clicker/idling games out there. 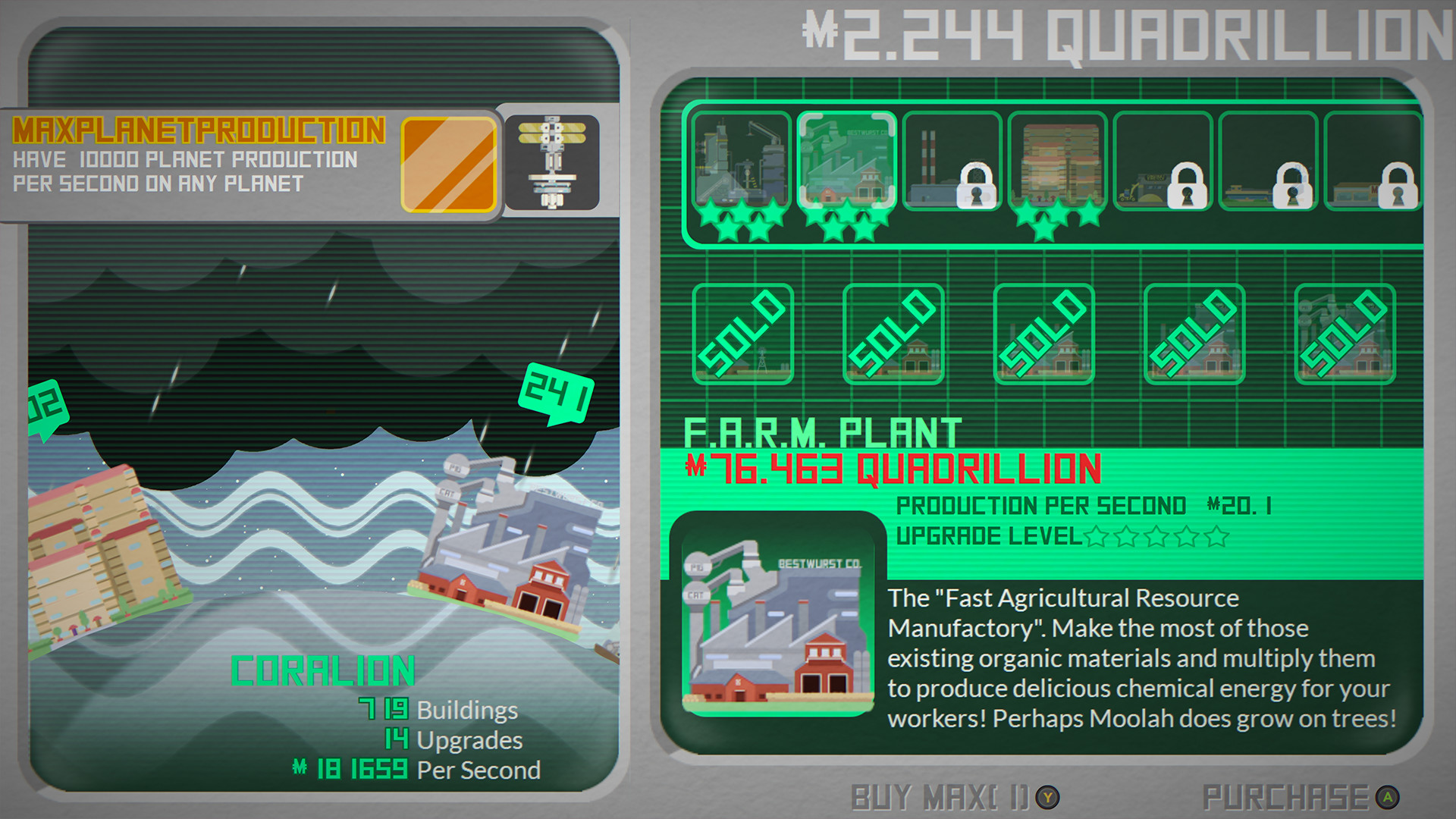 However, there’s only so much you can do on each solar system, as you’ll be somewhat forced to move on to the next if you want to unlock more building types. The way you progress through to the next system is by making enough money until you eventually have enough to summon the solar system’s boss. After defeating it, you’ll be able to travel to a new solar system by going through a wormhole, which you can also use to go back to previous star systems. With that said, the different bosses are varied enough that I was curious to see what the next one would be but don’t expect anything crazy out of them, they’re mostly moving around and the screen locks in place once the battle begins, thus often becoming a bullet hell fest. Each solar system is unique and has its own dominant civilization and enemy types that inhabit it, so there’s a slight degree of variety in each new location you go to.

Now, the whole part of the game that involves managing your empire is fine, but where I have issues with the game is how it tries to be an actual arcade shooter. The game really warrants a controller in order to be played properly, as it’s really difficult to aim with the mouse. When playing with a controller, the game plays pretty much like a twin-stick shooter, in which you move your ship with the left thumbstick and you fire your weapon in the direction you want to with your right thumbstick. It handles just fine with a controller but the aiming with the mouse clearly shows that barely any effort was put into it. Sure, quite a lot of people might argue that as long as it plays fine with a controller it’s all good, especially since controllers are not really hard to come by, but you have to take into consideration that when you’re developing a game for PC, you must consider that not everyone is going to have a controller and that there are people who are just more comfortable playing with a keyboard and mouse. 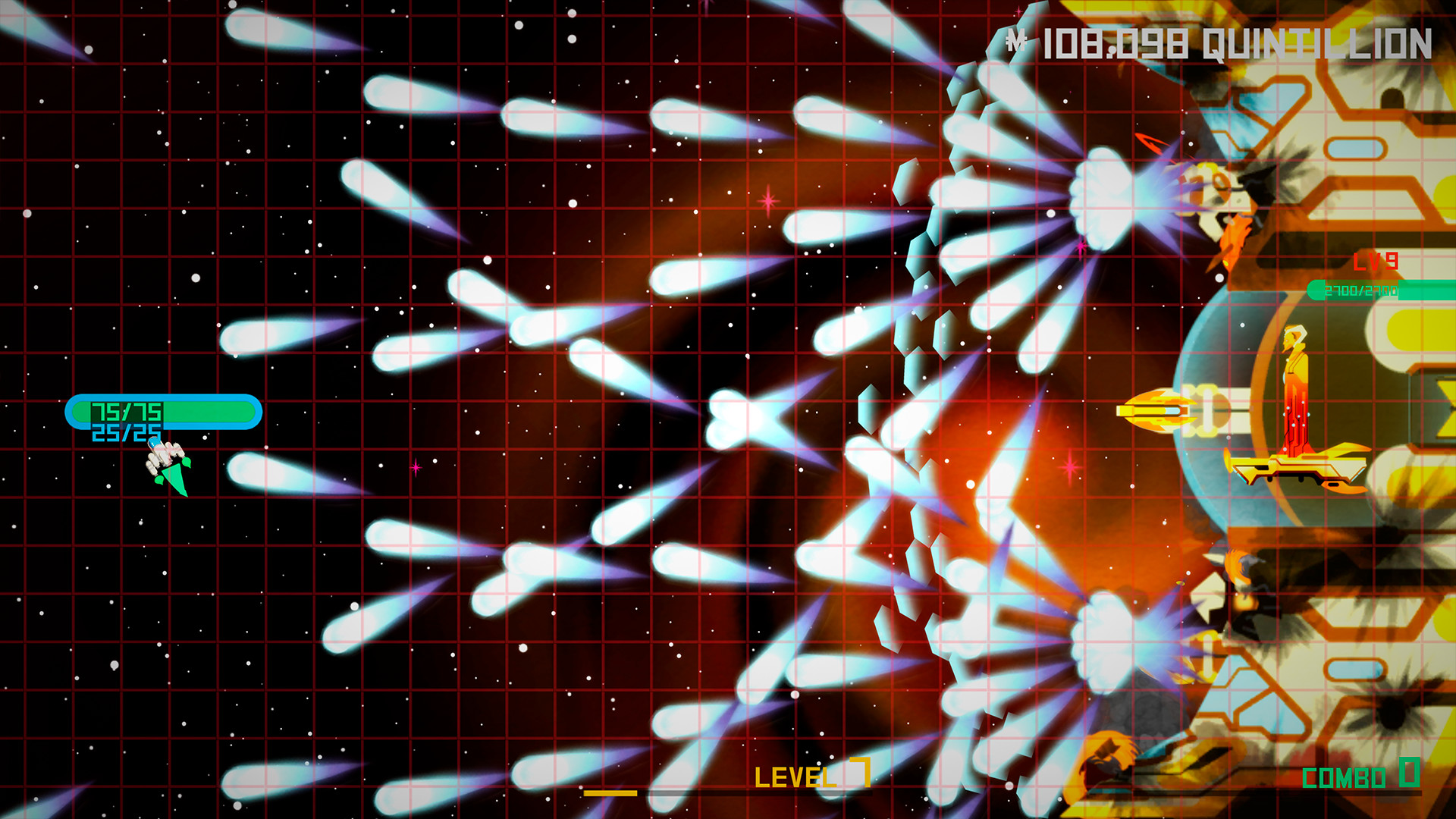 With all that said, as an arcade shooter, it’s competent. There’s a rather surprising amount of weapon variety, in which you can combine three different weapon types at your space station thus coming up with all sorts of weird of weapons, like shooting unicorns. Yes, unicorns. Other than that you can upgrade your ship’s health points and energy, which acts both as a shield and as a boost for moving around faster.

One thing that I must mention is that I did encounter quite a few problems while playing the game. It would randomly not allow me to tab out to other windows, not even by pressing the Windows key, sometimes not even the keyboard and mouse would work, and even though my frame rate counter claims the game is running at 144 frames per second, the game feels sluggish at times. The fact that there are no video options, not even the option to choose between full screen, borderless or your own resolution is also odd, to say the least. 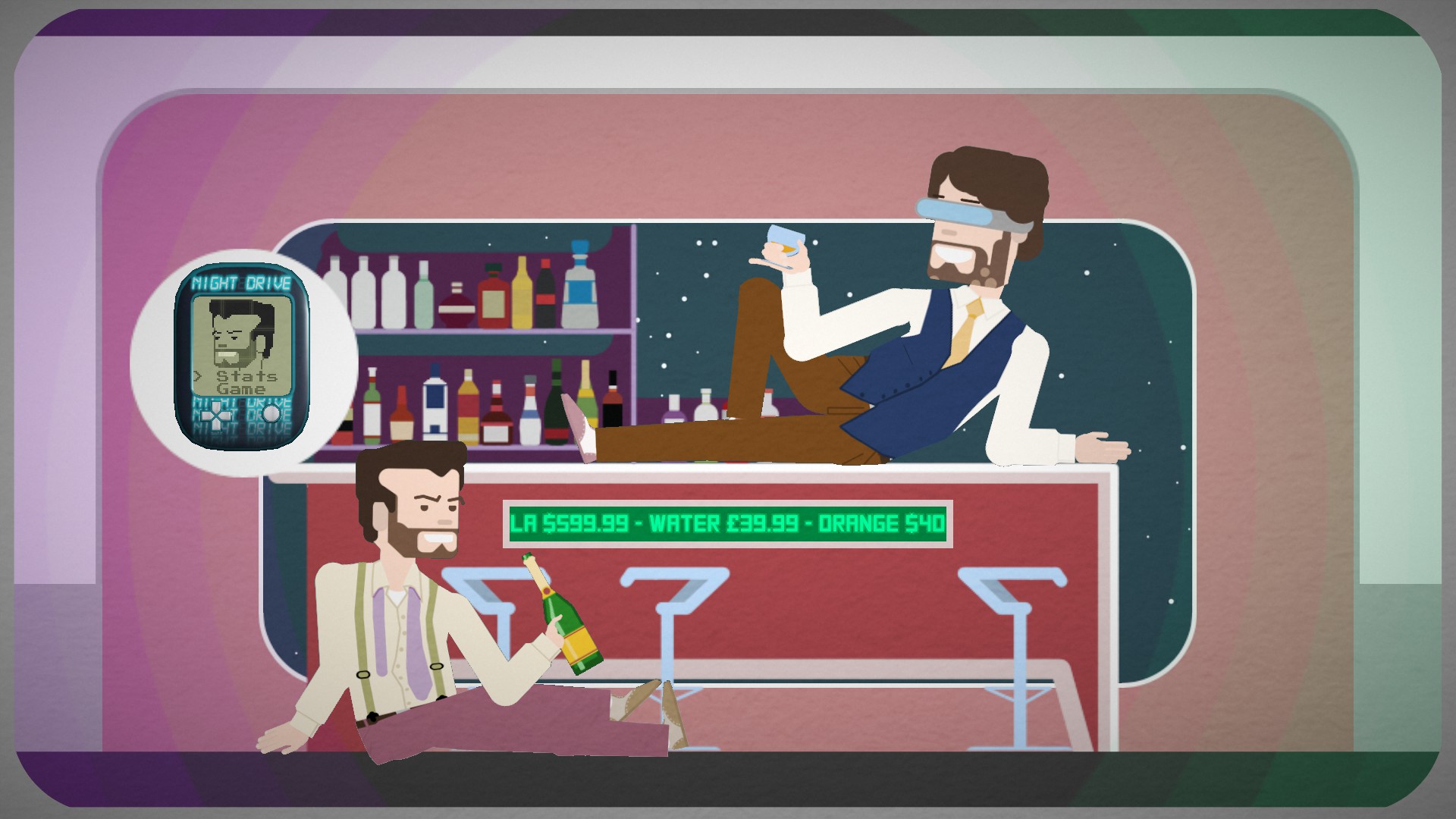 In the end, there are some cool things about the game here and there. The game’s theme and setting, the visuals, the music (even though it just plays on a loop), and the mini games that you can play in order to gain items that boost your staff happiness are also a pretty neat touch. I really wish the whole idea of being the CEO of a corporation that is expanding its venture across the universe had more to it, other than just a basic mixture of an arcade shooter with an idle game.

Nonetheless, despite all my criticisms, I don’t think that Vostok Inc. is a bad game, but I also don’t think it’s a good one. It’s just not worth the asking price for me. There are far too many idling/clicker games out there that you can play for free, each with their own gimmicks, and the fact that, as a PC game, this feels pretty poor in terms of options, it doesn’t really help in recommending this game to such an audience.