Voxelaxy (a combination of voxel and galaxy, apparently) is a new science-fiction survival game currently in Early Access.

In Voxelaxy you play a lonely astronaut stranded on a strange planet after his spaceship, Mouse, was attacked and destroyed in the subsequent crash landing. Though your ship seems to be no more, you do start with a small stack of boxes full of useful items that you’ve presumably managed to salvage from the wreck, including a number of useful and still-working machines and devices with which you can craft other things.

Voxelaxy uses 3D pixel graphics, or voxels, which are rather well done. The voxels are large and blocky and still manage to convey some characteristics and personality. I immediately felt for the protagonist, even though he never says anything or does anything personable — he may as well be a robot — and most of the planet’s indigenous creatures were interesting, even cute.

The game features dynamic lighting, which is excellent, and the dynamic shadows produced by the lighting system are very convincing. You’ll see quite a lot of this, too, since night on Voxelaxy’s planet is extremely dark. 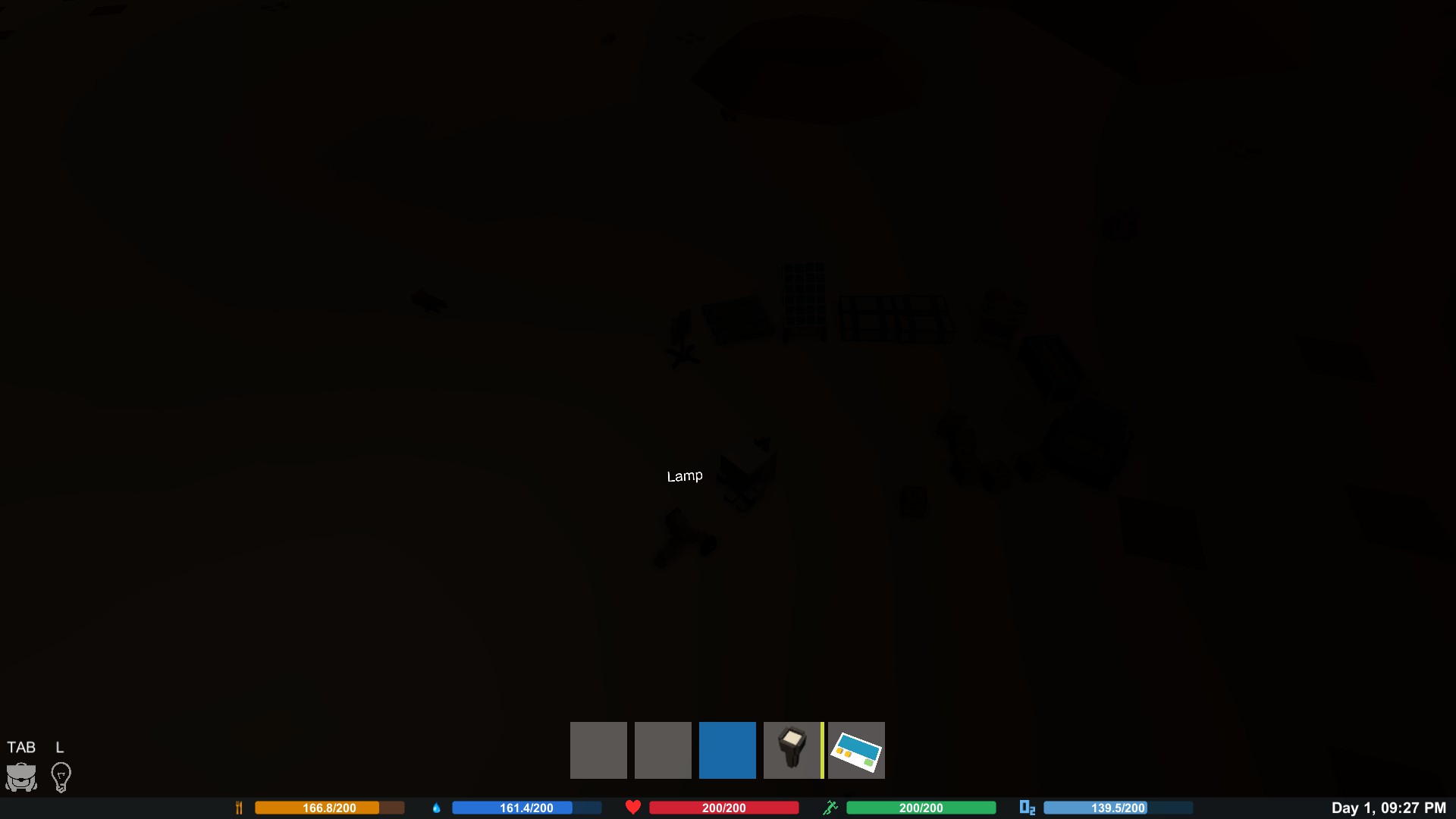 Strangely the camera view seems to be fixed in position relative to the protagonist, and there are no zoom or rotate controls, or at least none that I’ve found, making most of the store page’s screenshots impossible from in game. This is a real shame; zoom and rotate camera controls would be a great addition while the game is in Early Access.

The game runs well with no visual slowdown or stuttering. At the moment there are no in-game options, but Voxelaxy uses the standard Unity launcher, so you can adjust full screen / windowed mode and resolution, as well as a single detail setting between Simple, Good, Beautiful, and Fantastic, when you launch the game, at least. 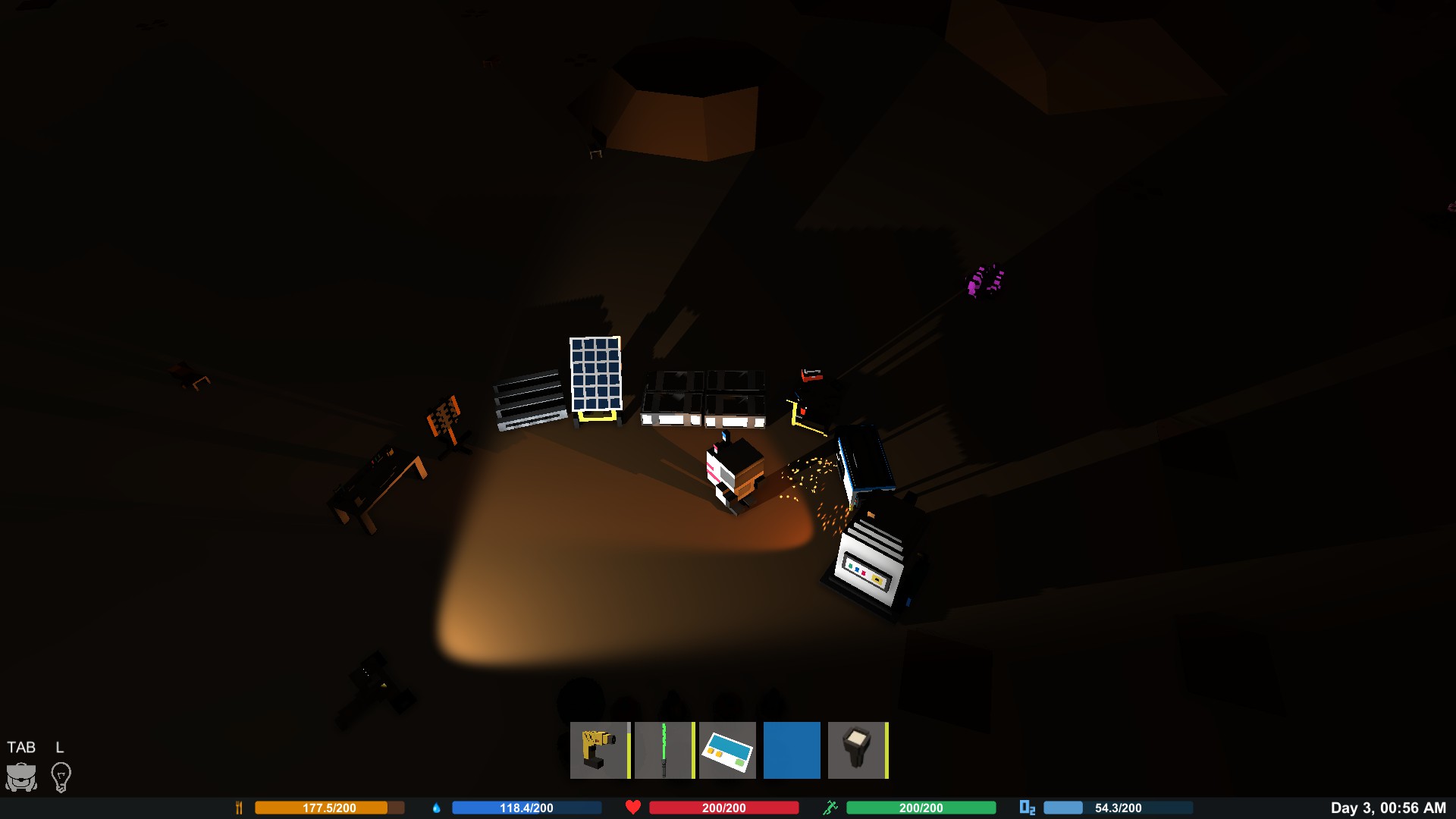 There is no music and only very few sound effects: mechanical sounds from equipment and devices, weapon attack sounds, and grunts when you get hit, as well as an eerie howling wind that is almost constant.

The first thing I noticed, apart from the title screen being strangely silent, was that the tutorial was a link to a Google document. It had some useful information, but you’re probably better off just watching the linked video on youtube. Anyway, moving on, you only really need to know a few simple things from the document and video.

First, controls are basic, if a bit wonky, WASD. I got used to them quickly, but coming from a twin-stick shooter before this, where controls were absolute (moving left causes movement towards the left of the screen and moving up moves towards the top of the screen) to Voxelaxy, where they’re relative (moving left rotates to the astronaut’s left and moving up moves the astronaut in the direction he or she is facing) took a bit of acclimatisation. I’d recommend adding an option to swap between absolute and relative mode. 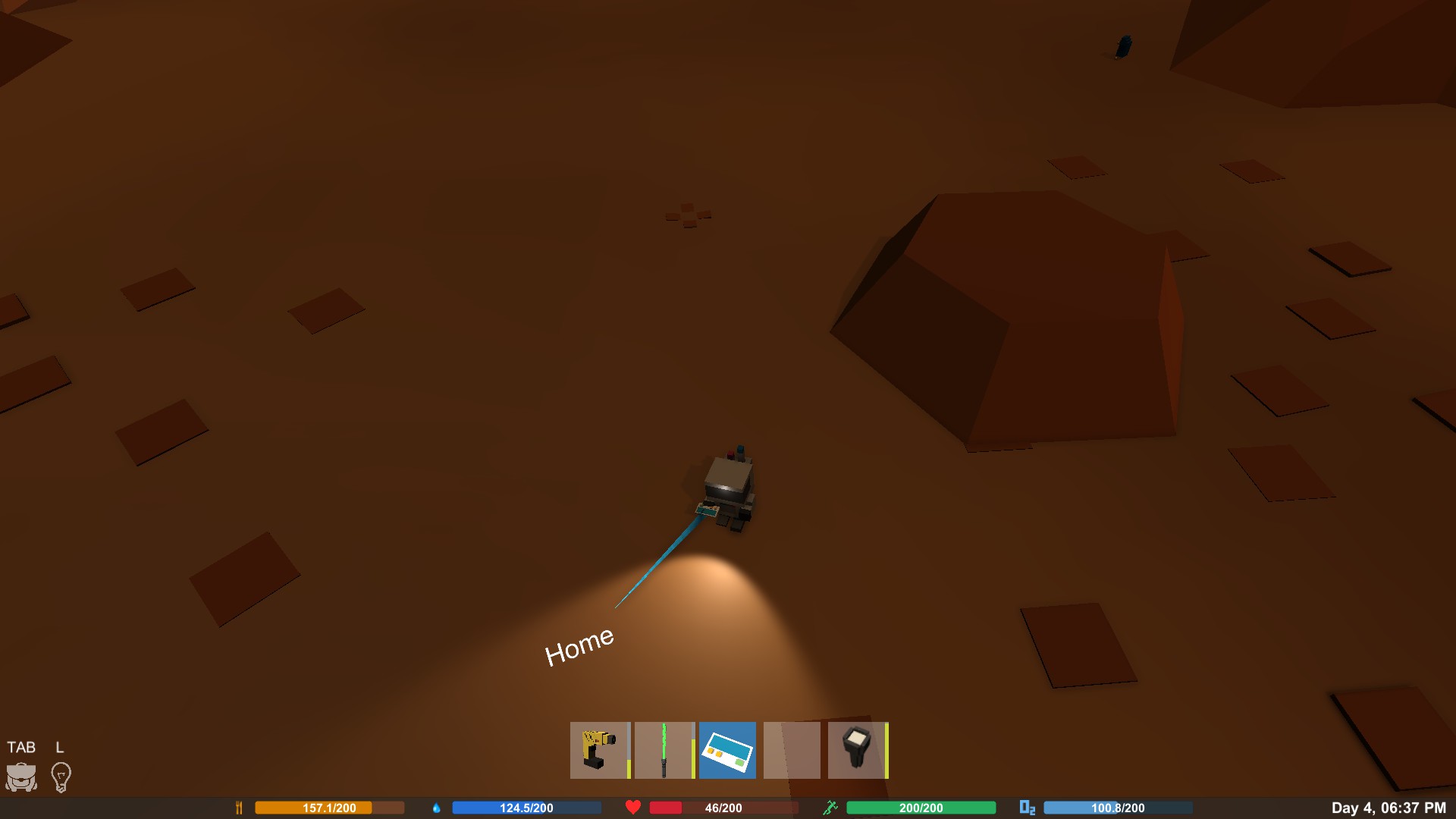 Other than movement you have an inventory (TAB) and a ‘hand inventory’ of five slots, with the active one chosen using 1-5 on the keyboard, though it would be good if they were mouse selectable as well; I keep finding myself clicking on them! You can then use primary or secondary actions for the active item by pressing the left or right mouse button. Holding shift causes the astronaut to run and clicking on in-game objects when you’re close enough without an active item will interact with them, if possible.

The other thing the manual and video tell you is how to get started in crafting and building up your home base. You start with a lot of cool stuff, but core to your crafting operations are the battery-operated crusher and furnace, the solar panel to charge flat batteries during the day, and the crafting table where you can build stuff. Oh, and the drills and drill bits that you use to mine minerals you find scattered about the planet, which provide the raw materials for crafting. 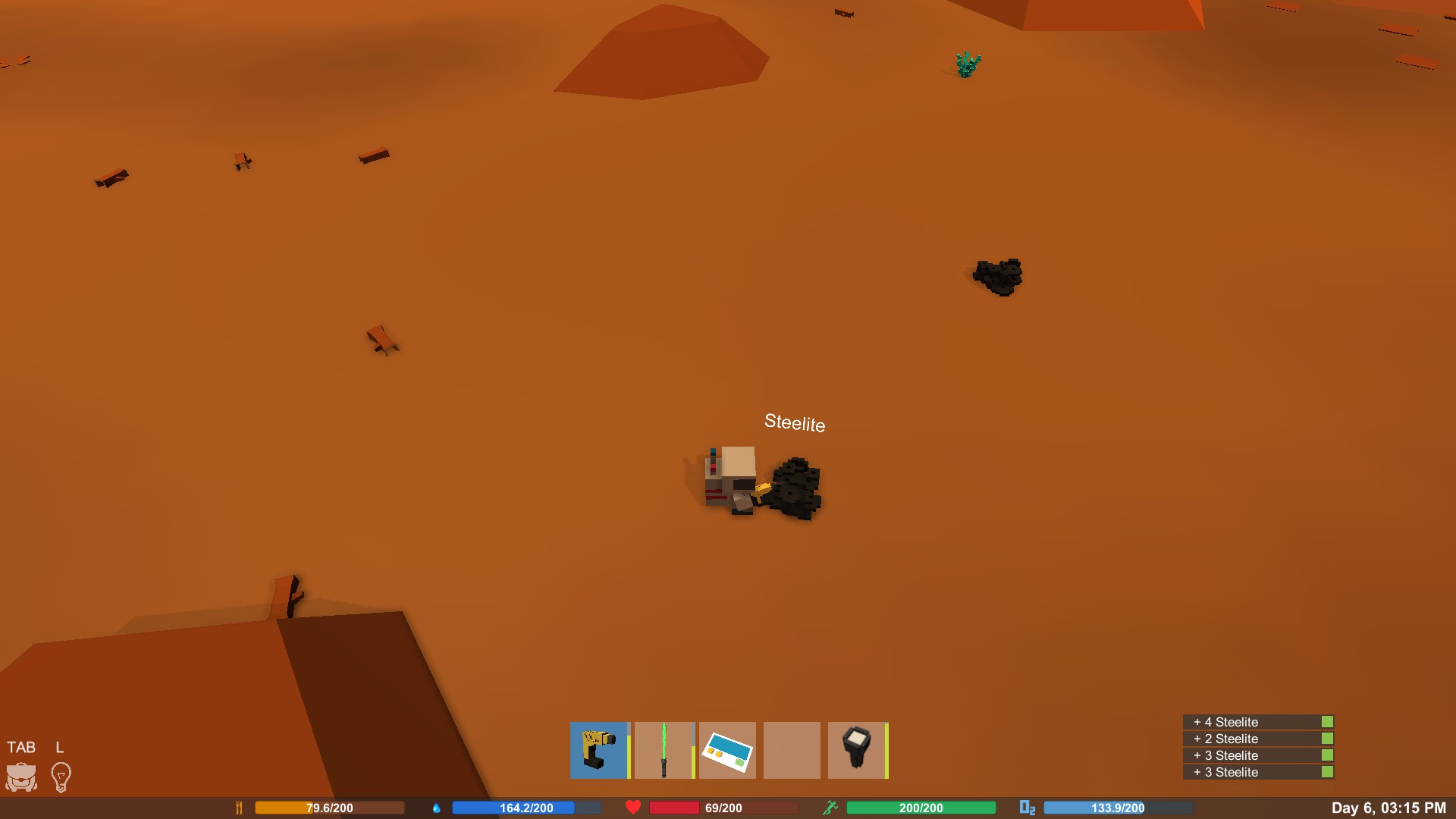 Since everything is battery powered, you typically spend your days looking for the minerals you need — hint: oxygenite and iceite are the big two to begin with, since oxygen and water are so important — dodging or fighting a few hostile creatures while your batteries charge up. When night falls you return to your base and then spend all night crafting.

Some of the indigenous creatures are hostile and some aren’t; you’ll learn which is which pretty quickly. The game has permadeath, which to me is a good thing, but I can see it might turn some potential players off. You also get to learn the minerals by sight pretty quickly, but the lack of camera controls hurts the experience. So far the planet seems pretty lifeless and boring; I’m hoping some different terrains, lighting effects, and weather are being considered for future development, as well as a bigger map; run in any direction for a few minutes and you’ll reach the edge (“so that’s what an invisible barrier looks like”). 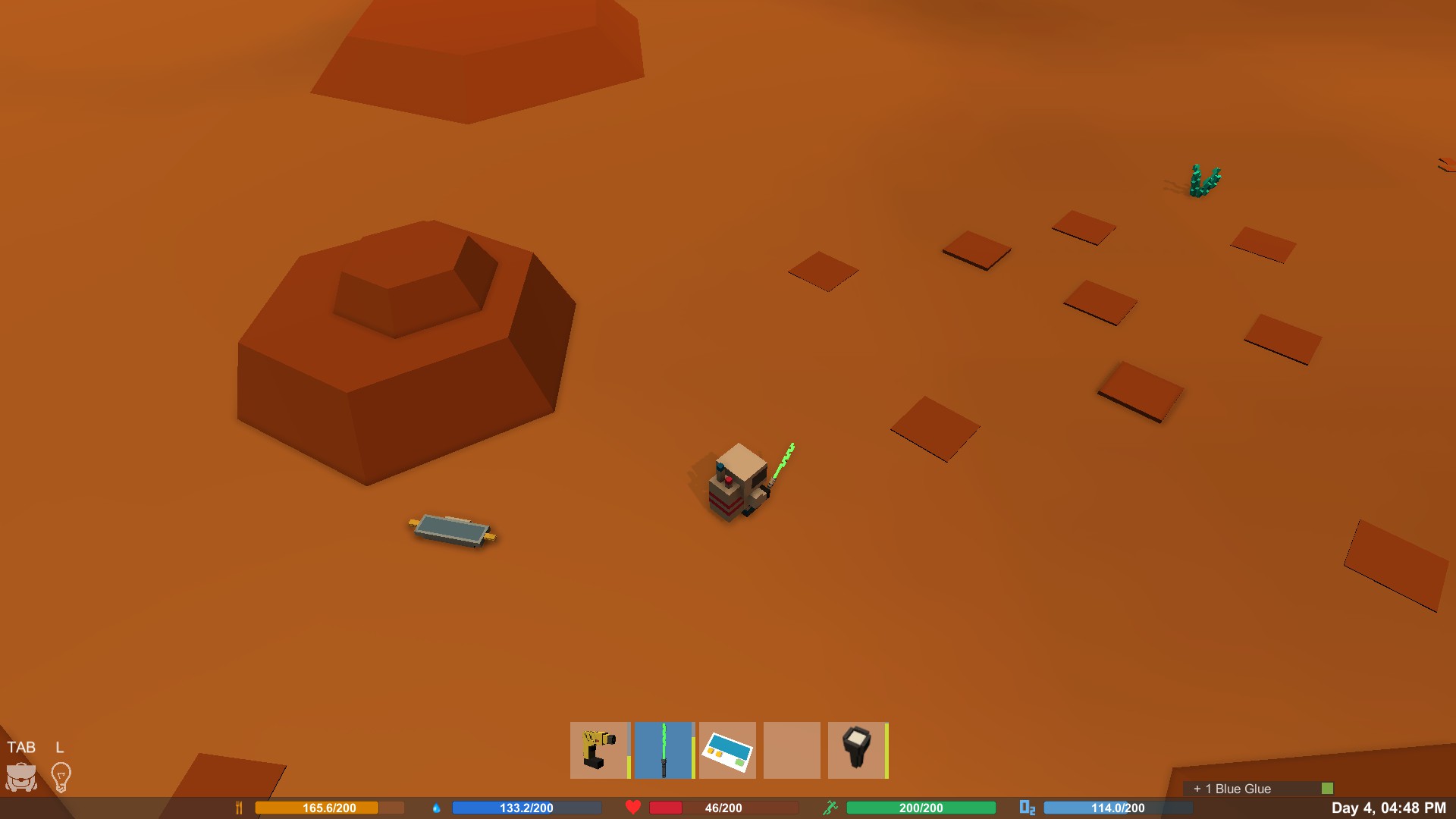 Once you have the hang of the basic gameplay elements, there’s not really much else to do yet. There are a few crafting tables to create, food to plant and process, and some useful items to make, but your basic survival needs never really change, so you’ll always be out searching for oxygen and water, and always mining more material to replace your rather weak drill bits, spending what extra time you have each day searching for the next thing you want to make. This is fun for a few hours, but with no longer-term goals, once you have food, a projectile weapon, and a couple of other toys, that’s about as far as you can go right now.

The core gameplay works well, but more needs to be done with it. Enclosed, pressurised spaces and water and oxygen extractors/collectors, for example, would create a second stage to the game, shifting the needs from basic survival to comfort or longer-term goals. What’s the astronaut’s end goal? Does he or she want to build another ship to escape the planet, search for what brought down Mouse in the first place, or settle in and grow old in this strange place? Any of those could be cool. Some of the higher-technology items don’t even have a use yet, from what I can see, and there’s no way to recycle anything (broken drill bits, for example).

As with most Early Access games, Voxelaxy has a few quirks and bugs. The worst by far is that it doesn’t autosave, and it can freeze on you. I lost a huge amount of time from one of these, which was pretty disappointing. So make sure to SAVE OFTEN! Other than the lacking controls I mentioned earlier, the in-game menu is also pretty pointless; to change any options or even look at controls you have to quit and restart, and use the Unity launcher. It’s also a bit finicky when mining sometimes; you have to make sure the astronaut is at the right angle or you’ll drill away at the air for a while. 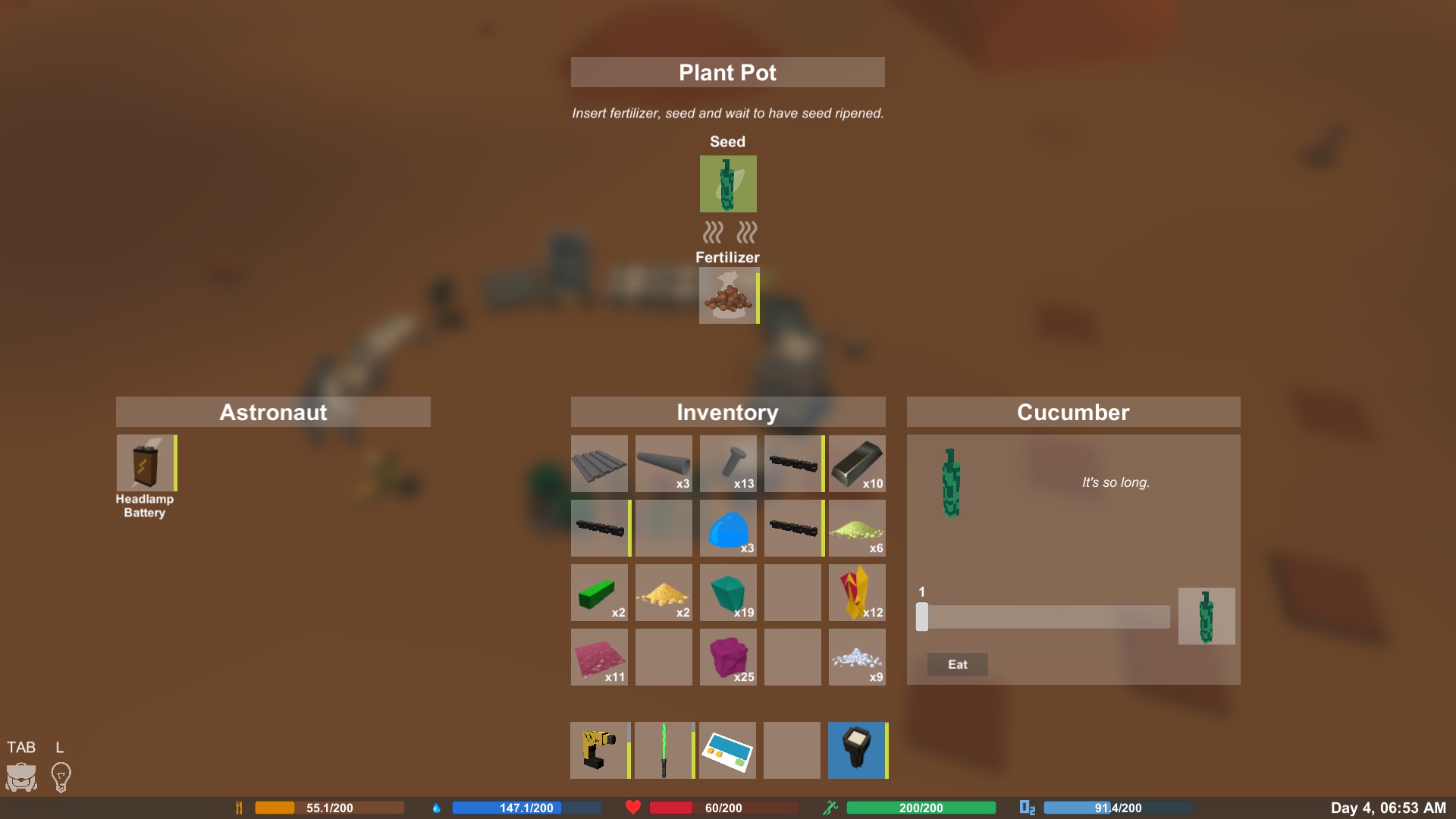 Cons:
– Only basic survival so far, making the game very repetitive; no longer-term goals
– Poor sound and music
– A bit unstable
– No camera or absolute controls

Voxelaxy is currently a great foundation for a sandbox survival game, but there’s not yet enough content to hold my interest for more than a few hours. With additional crafting options to shift the focus from the most basic survival (water, oxygen, food) to more longer-term goals the game could become much more interesting. As it is now, it’s fun for a bit, at least until it freezes on you and makes you rage quit.

I’m not sure what the developer has in mind for Early Access, but I can see so much potential in this game. I’m excited to see where it goes.