Rezrog is a new turn-based rogue-like dungeon crawler reminiscent of a tile-based board game.

Rezrog is a turn-based rogue-like dungeon crawler and the debut title from developers, Soaphog

In Rezrog you control a party of adventurers brought together by chance. While traveling through the lands of Rezrog they were independently set upon by groups of monsters. Finding each other and banding together to defeat the evil creatures, they decide to eat, drink, and sleep off their exertions in a nearby tavern. All is not well, however, as the tavern keeper and other patrons are nowhere to be seen.

After recuperating overnight, the adventurers decide to prolong their time together and find out what has happened to the tavern’s inhabitants. Progressing through a great many dungeons, the adventurers rescue the inhabitants — most of whom disappear without trace afterwards — and discover the cause of the sudden increase of dangerous creatures across the lands.

Rezrog’s graphics are exceptionally well done. The game looks very much like a board game, with dungeon floors fitting together like hastily placed cardboard tiles, and walls like little painted cubes that have been dropped on the table and moved roughly into place. Characters are rather good simulations of little cardboard cutouts on stands (adding simple weapons and armour when equipped). The background looks like a wood-grain table, complete with various real-world items scattered about, such as cans of drink, pizza, and dice. 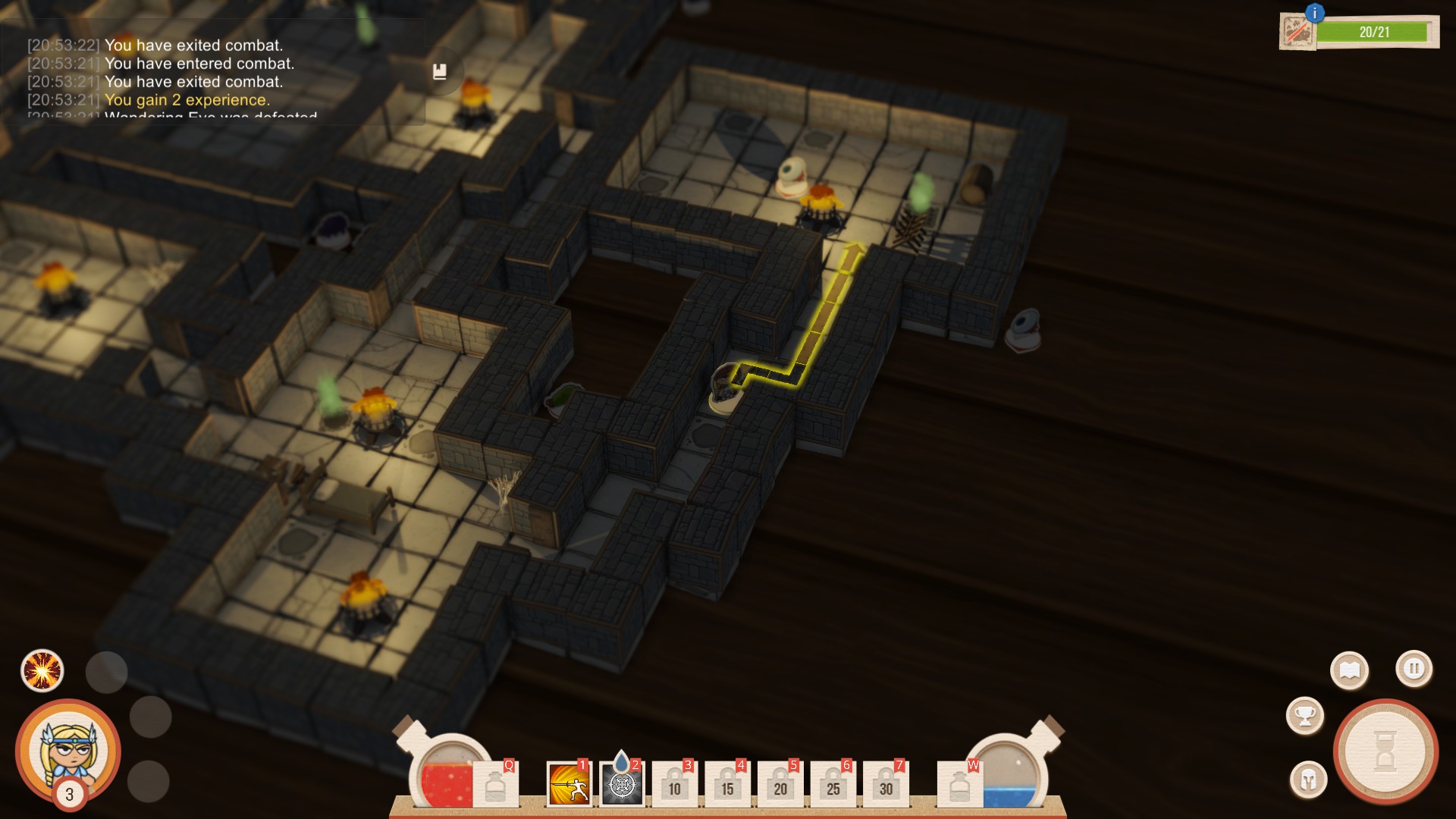 Character animations are extremely simple, with the paper-doll figures hopping about as if moved a square at a time by hand, and no ‘internal’ animations within the characters themselves. Little effect graphics appear when you attack or use abilities, but I noticed some of the ranged abilities were quite slow, especially those that grant multiple attacks.

When you open a door the next corridor or room falls into view, tile-by-tile, in a manner similar to Rogue Wizards. In contrast to that game, though, here the tiles behind your current field of view don’t disappear, and you can always see the whole of the new hall or room, avoiding the restrictive visibility issues of Rogue Wizards. It works much better here, I think. The floor tiles rise a little when you mouse over them, too, which is rather pointless, but it’s a nice touch regardless.

Dynamic lighting and shadows are great, and there’s a very good DoF effect that keeps focus on the central section of the screen no matter the zoom. You can freely zoom and rotate the third-person camera around your character, but can’t scroll the map; you’re always in the centre of the screen. This can make larger rooms a bit awkward, especially if you’re playing a ranged character and want to take long-range pot shots.

Cut scenes are painted with small parts of them coarsely animated. The effect is reasonably well done, but there’s some slightly odd wording in the introduction. 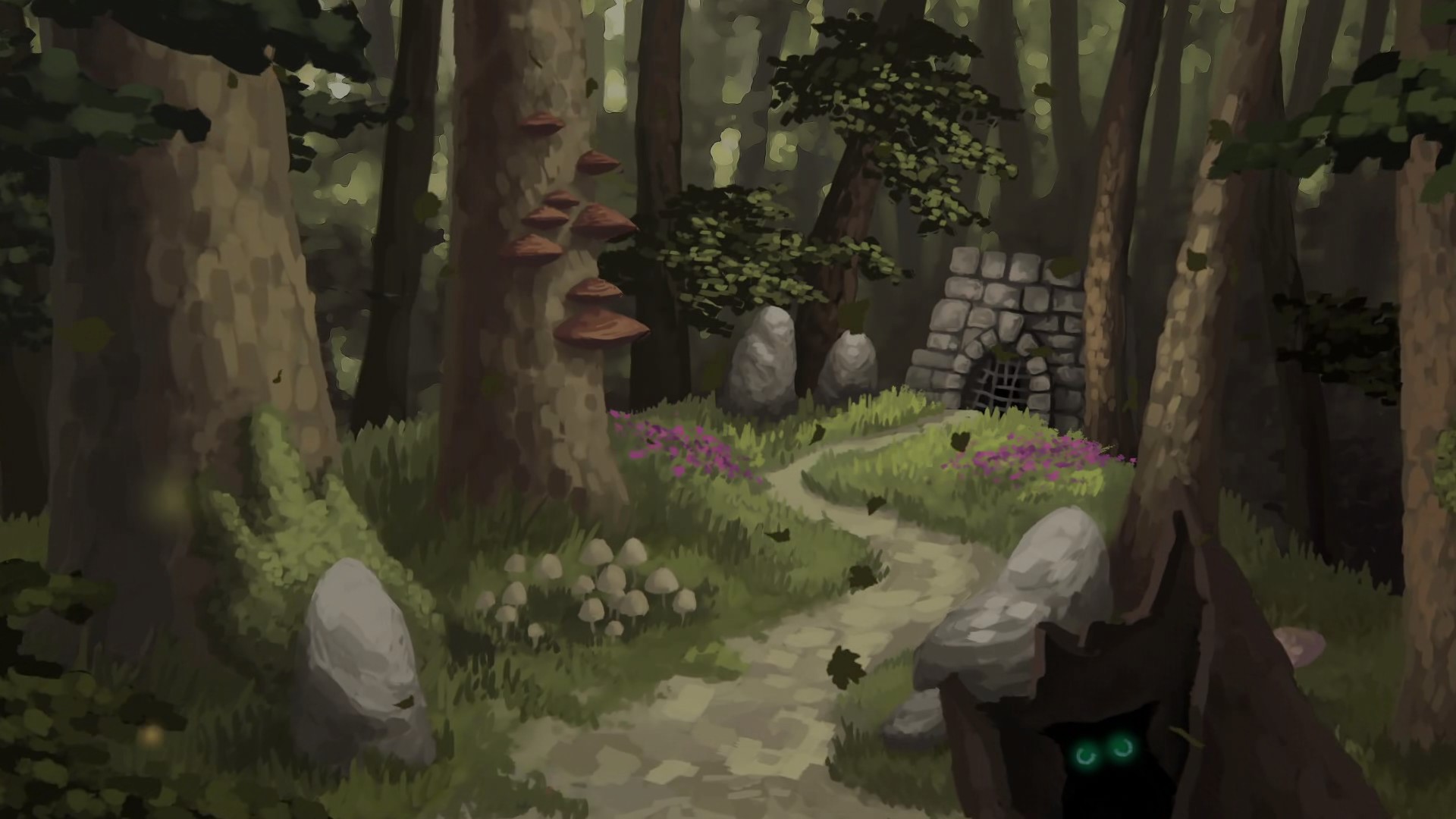 There are lots of detail options to play with and the game performs well.

There seems to only be a very small number of music tracks, as I seem to always here the same one or two when inside a dungeon. I think there’s only one out-of-dungeon track; if there are more then they didn’t stand out. The music fits the game style quite well, with a sort-of classical fantasy game feel, but it didn’t strike me as anything exemplary — or terrible, for that matter.

Sound effects are mostly good, but feel a bit out of place at times. I love the “Eeek!” when the Paladin character is hit, but at the same time it sounds like someone going “Eeek!” into a microphone; it just doesn’t quite fit the rest of the game.

Other than the occasional squeals and grunts there are no voices. 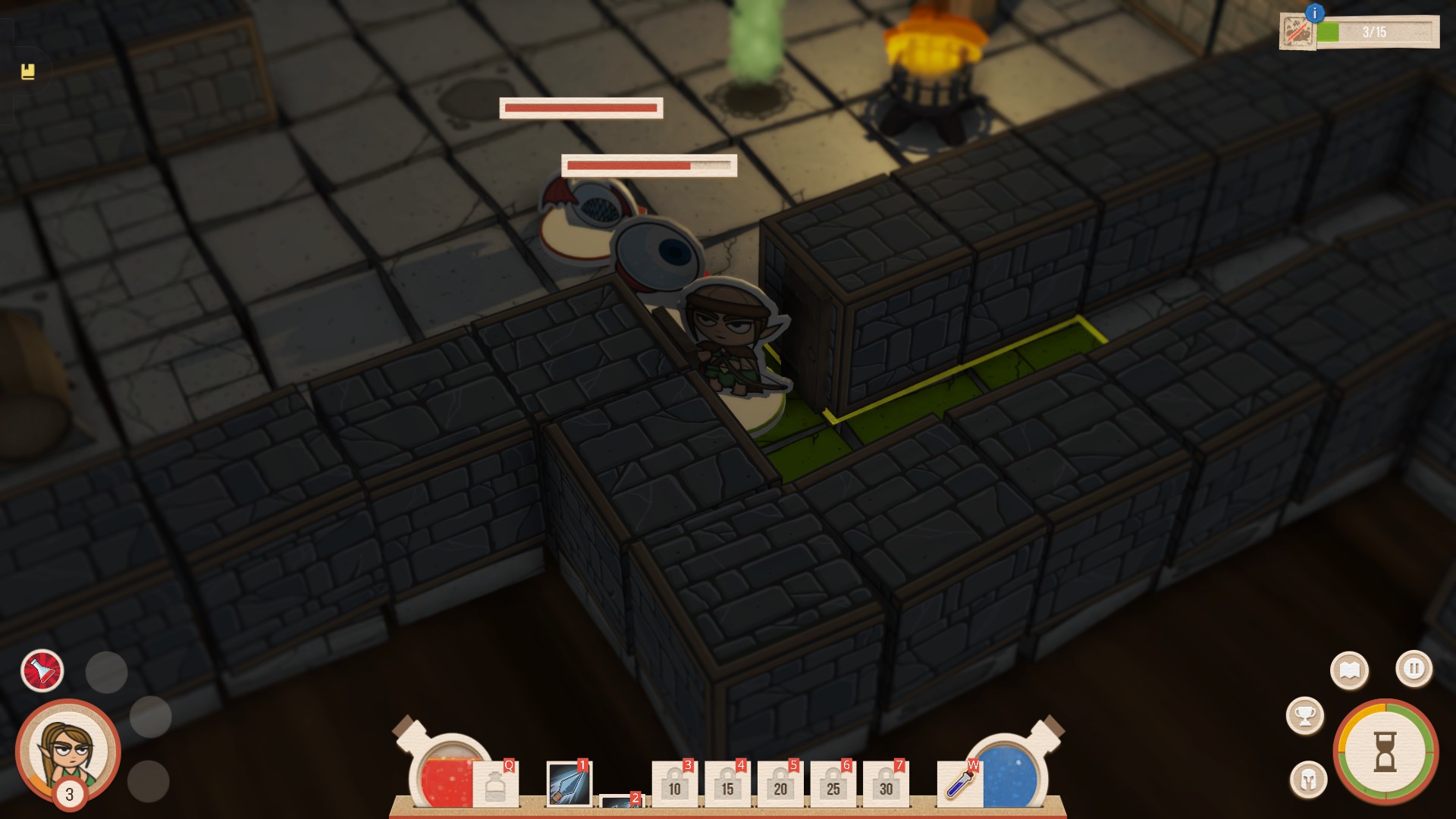 Rezrog adds a few extra ingredients to the classic recipe, most of which have been seen before. These include a random effect that is active for each dungeon, such as bonus damage for a particular element or more effective potions; different goals for each dungeon, such as rescuing prisoners or collecting parts of a broken key; and a choice each level of using one of seven different character classes — mage, archer, paladin, warlock, rogue, warrior, and summoner — each with individual attributes, levels, and skills to develop. Furthermore, it’s actually quite hard to die in Rezrog. If the health of one of your characters drops to zero in a dungeon, he or she is captured and can be rescued by another character retrying the same level dungeon.

Characters have five basic attributes — strength, intellect, agility, endurance, and luck — as well as eight equipment slots, a relatively large inventory, and a set of unique skills to acquire and upgrade through use and application of elemental gems. Loot seems to be procedurally generated, but it’s also relatively limited in scope; you’ll probably pick up a lot of the same items over and over. 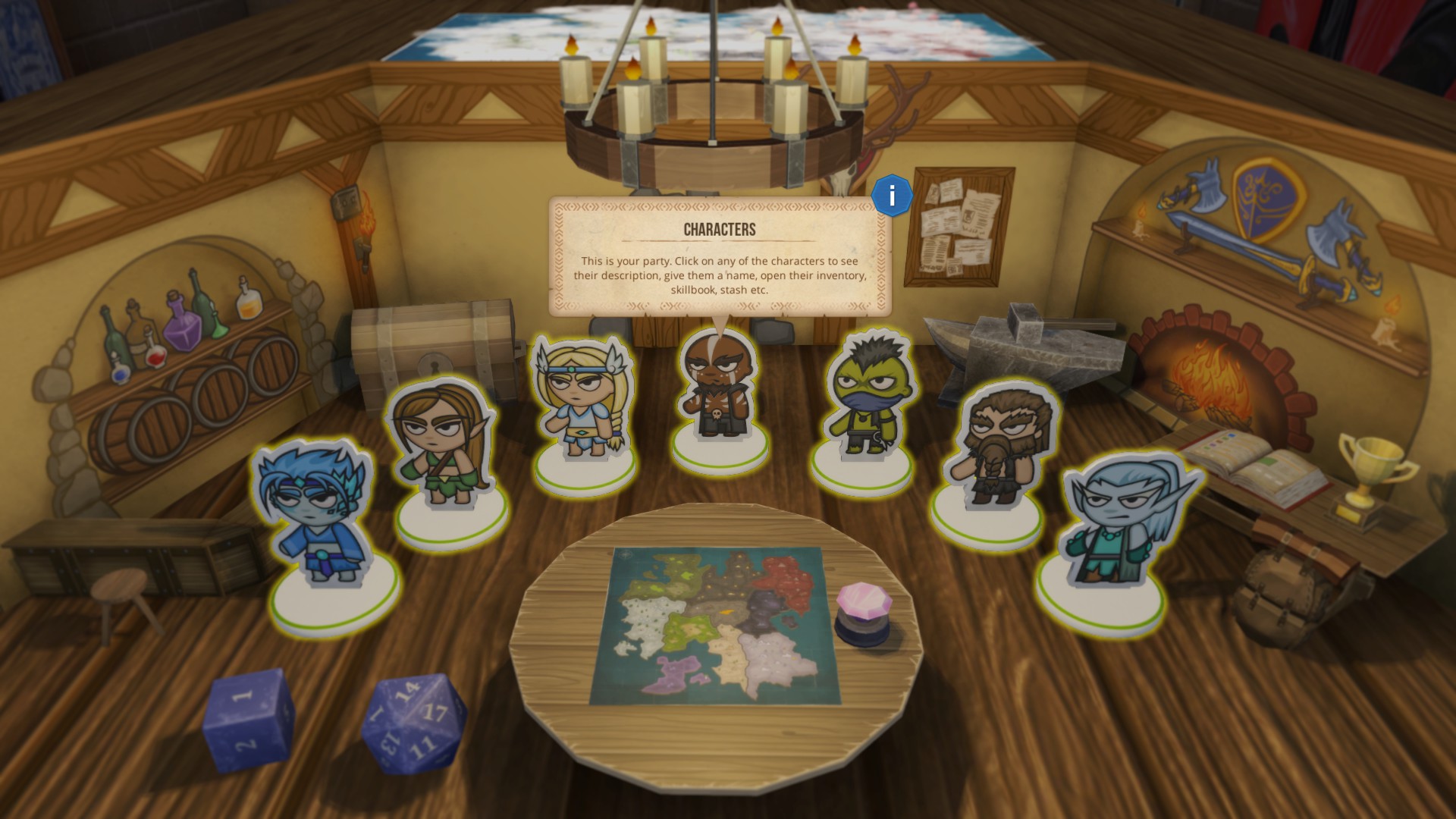 After completing a dungeon you’re given total scores for the number of monsters beaten and treasure collected. This seems to affect how many experience points and gold you receive, but that seems to be it; there’s no real penalty for finishing a dungeon without exploring every room.

Between dungeons you can return to the tavern, which is your base of operations. Here you can manage inventory and skills, buy and sell items (once you’ve rescued the trader), repair items that have lost durability through use, and upgrade your characters at the ‘legacy forge’. This takes special gems that you can find in the dungeon, together with gold, and provides bonus attribute points to spend on your chosen character. These specially purchased attributes are meant to stay with the character through multiple play throughs, as a sort of permanent progression. 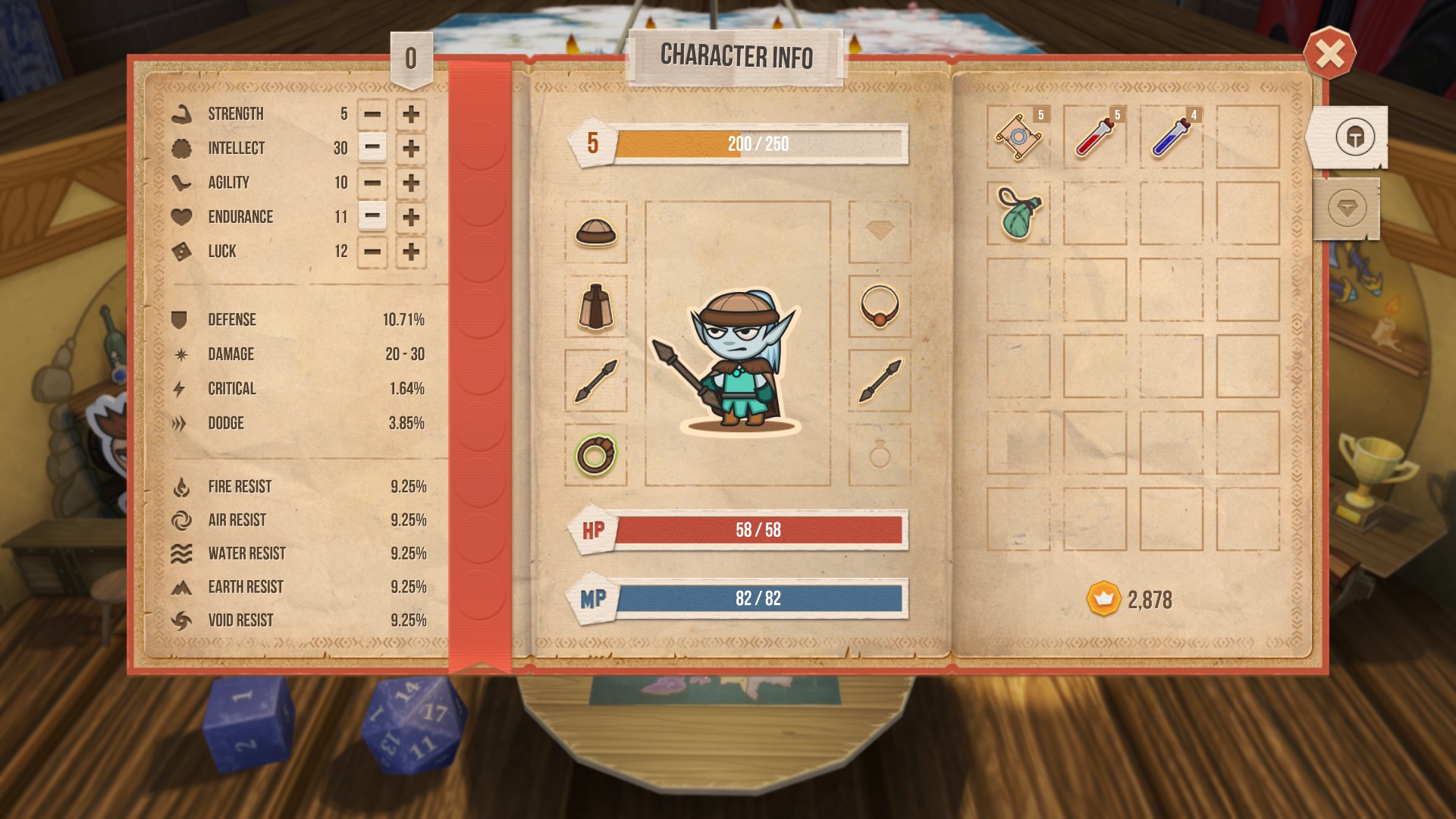 The game has a fairly long list of limitations and annoyances. I encountered the following that I thought were worth mention here:
– Pathfinding may take you through damaging tiles: beware!
– Sometimes the game breaks with combat around doors, blocking off a doorway with no way to proceed past it.
– Food doesn’t always work reliably when out of combat; sometimes it doesn’t last as long as it should.
– Durability and what happens when it runs out isn’t obvious; it seems to make no difference!
– Inventory management is more annoying than it should be, swapping between shared stash and character equipment.
– You can’t move or attack on the diagonal, making ranged combat more restrictive than you’d expect.
– Tooltips are good throughout, except that no information is available on any enemies!
– Controlling the camera with the mouse is an exercise in patience.

Pros:
+ Great graphics
+ Good range of characters and skills
+ Steam Achievements (206 of them!) and Trading Cards

Cons:
– Loot is a bit boring
– Some bugs and other issues 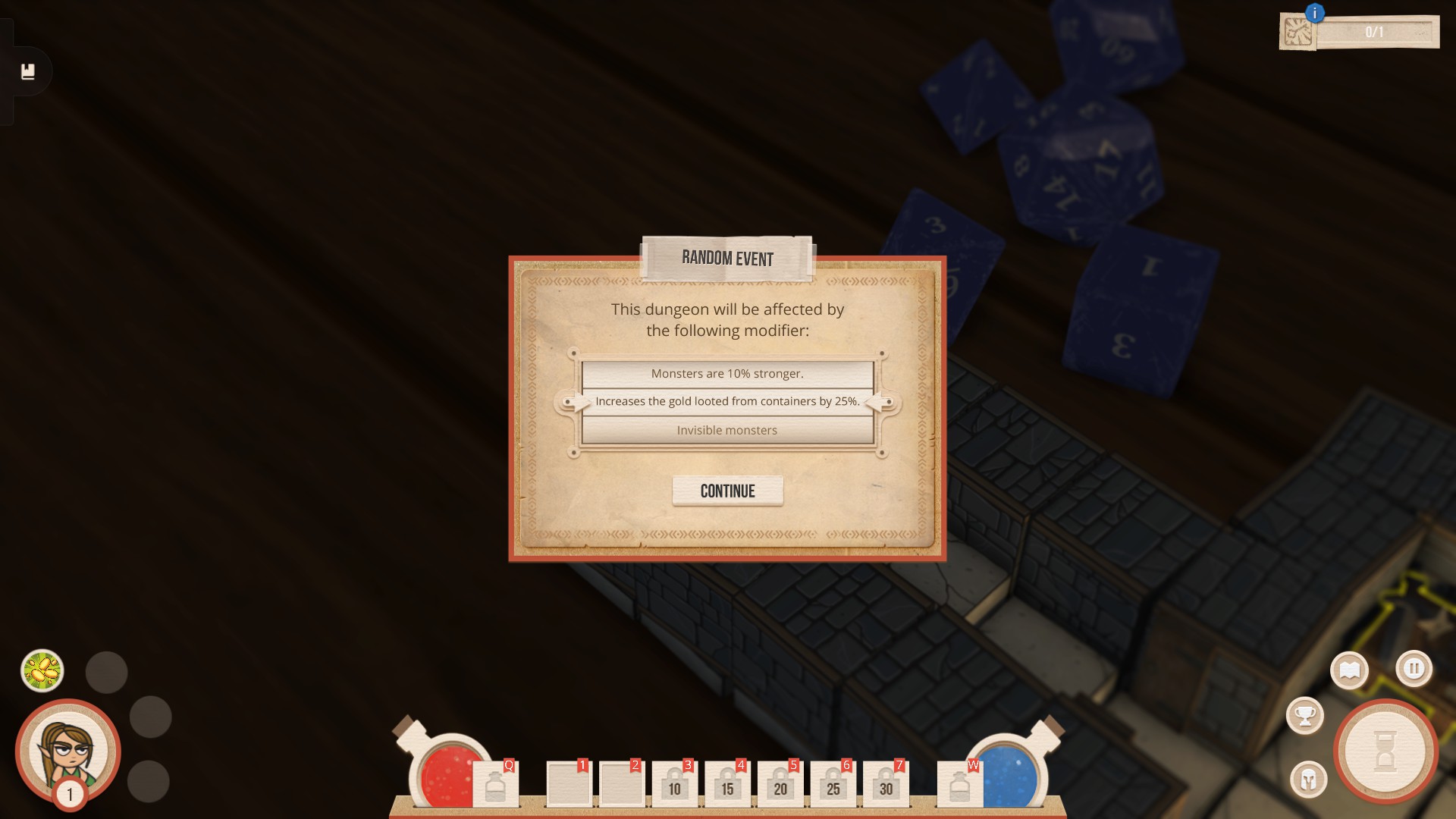 Soaphog have done a very good job with Rezrog. The graphics are fantastic and the game is fun to play, with plenty of longevity. It’s a bit buggy and limited in certain ways, and the loot could be more interesting, but there’s still enough variation in the characters and skills to provide plenty of hours of enjoyable rogue-like dungeon crawling.