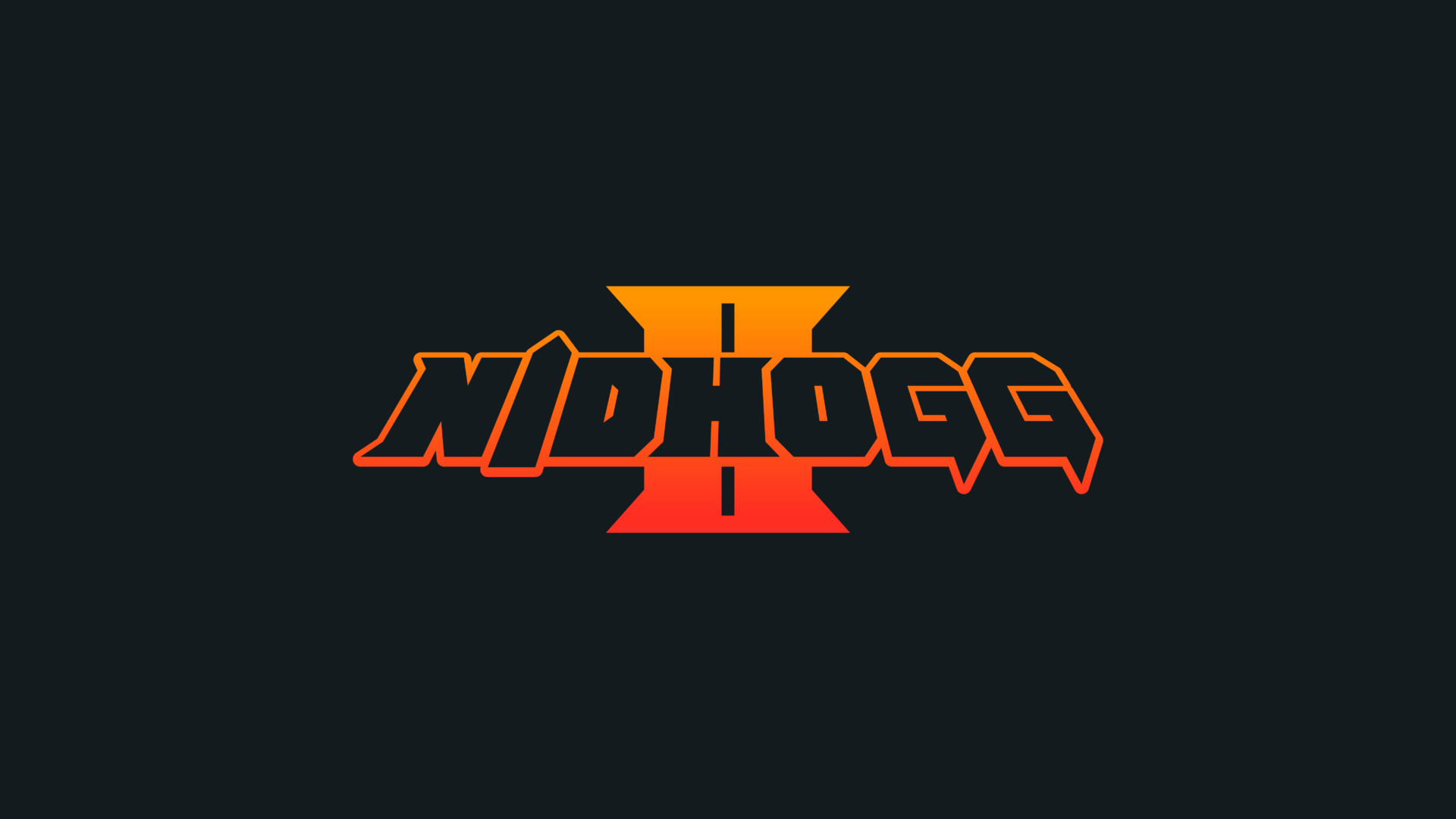 The fencing simulator is back to let you stab your friends as the crowd exults.

The first Nidhogg was fiercely awaited before its release. The game was shown at several gaming events, drawing crowds wildly cheering for two combatants fencing to their death in mesmerizingly psychedelic levels. It looked like tons of happiness in a healthy competitive way, and it was heart-wrenching not to be able to join in the fun during the years of teasing. And finally, it was released. While the game sold well, the release caused an uproar due to the laggy netcode amplified by the years of waiting. Messhof had messed this one up. How is the sequel going to fare?

Nidhogg belongs to the versus local multi-player games that are perfect for a party with friends. Some of the games in that category elect not to even feature online play, and there are multiple reasons for that. For one, fast-paced gameplay in which the result of an action is decided in milliseconds does not accommodate well for connection delays. Secondly, when these games feature an online multi-player, they are obviously not as populated as AAA games and many angry customers give a bad review mentioning that the game is empty. Well, when playing these games, you are supposed to bring your own friends! Or socialize on the game’s forums or Discord. Thirdly, not all developers have the knowledge or capabilities to devise online play. Then on the other hand, when there is no online multi-player the players are going to invade the forums to let the developers know that no, they are not going to buy the game. Well, I can understand them. Nowadays there are friendships all over the globe, and even when living in the same city it’s just easier to play from each person’s room than to have to travel all the way regularly. So there is a huge demand for these fun games to be made available online on top of locally, and once again the pressure is on Nidhogg 2 to deliver. But I will ask you a little bit of patience so I can talk about the rest of the game first. 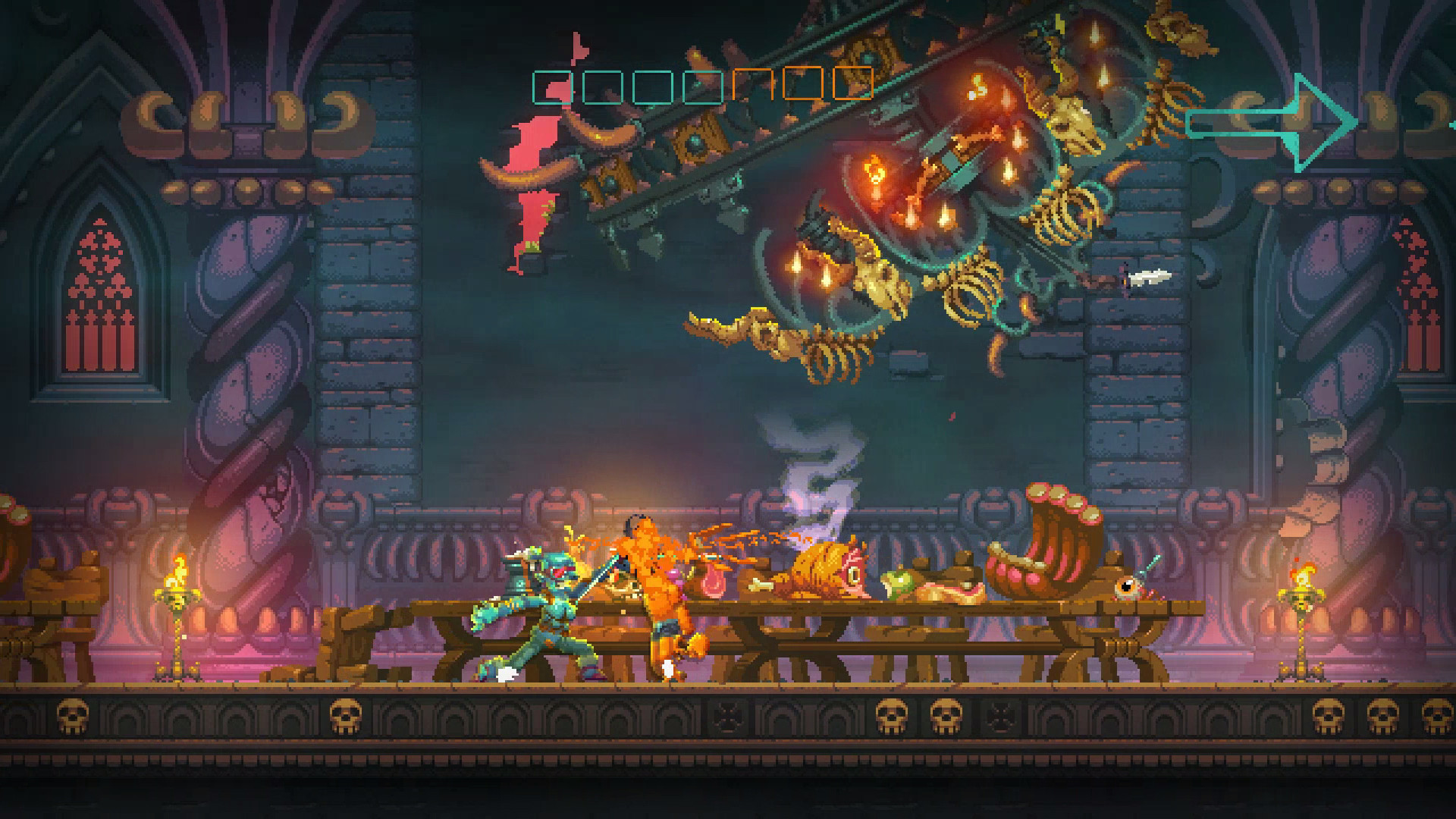 Well, what is Nidhogg 2? A fight to the death between two fighters? Yes and no. One strike can kill, but that is not the end of the round. To claim victory, one of the two fighters has to reach the far end of the level and be eaten by a giant flying worm, Nidhogg. The way the system works is that a player can only move forward if they had the last kill. Thus, there is one attacker and one defender, then it shifts and that’s what is absolutely brilliant in the dynamic of this game. Let’s imagine that the attacker has to jump to the next part of the level, and the defender is on the higher ground, waiting there patiently. The attacker will have to make the jump if he wants to push forward, but the other one can just stick their sword inside the attacker’s heart on the landing. And here you have growing tension, as the two are staring at each other, either conjuring up feints and plans or waiting for a moment of inattention… or LEEEROY JENKINS!

The most exhilarating moments of Nidhogg come from nerve-wrenching back-and-forths until someone takes the advantage. In the first Nidhogg, I regretted that the movements allowed to easily outpace the adversary and run past them one way or another. I played this game competitively in tournaments, and in the end, it looked more like a race than a duel. Nidhogg 2 remediates that with slightly slower movements, and little pauses after some actions that are not enough to break the pace of the game but admirably prevent it from using cowardly tactics. Furthermore, the counters work better and it is easier to savagely stomp a player trying to crouch-slide between the legs of their opponent. And if all else fails, it is still possible to throw your sword at their back and hit their spine!

So, basically, what I am saying is that the base gameplay is better than in the first Nidhogg. But then, they had to add new weapons. There is the good old rapier (épée), but also a knife, a two-handed claymore and a bow. Those weapons are changed upon respawn. The knife has less reach than the others, why would you want it? Then the bow sounds cool at first, you can attack from a longer distance. But then the adversary can just reflect back the arrow with a guard stance, so then it becomes even more dangerous for the archer… The only advantage I see with it is when the opponent has the claymore, since this one cannot guard in the middle, only high and low. But then the claymore is a weapon of mass destruction that can disarm the rapier or cut the other player to a thousand pieces mid-jump. An absolute joy. 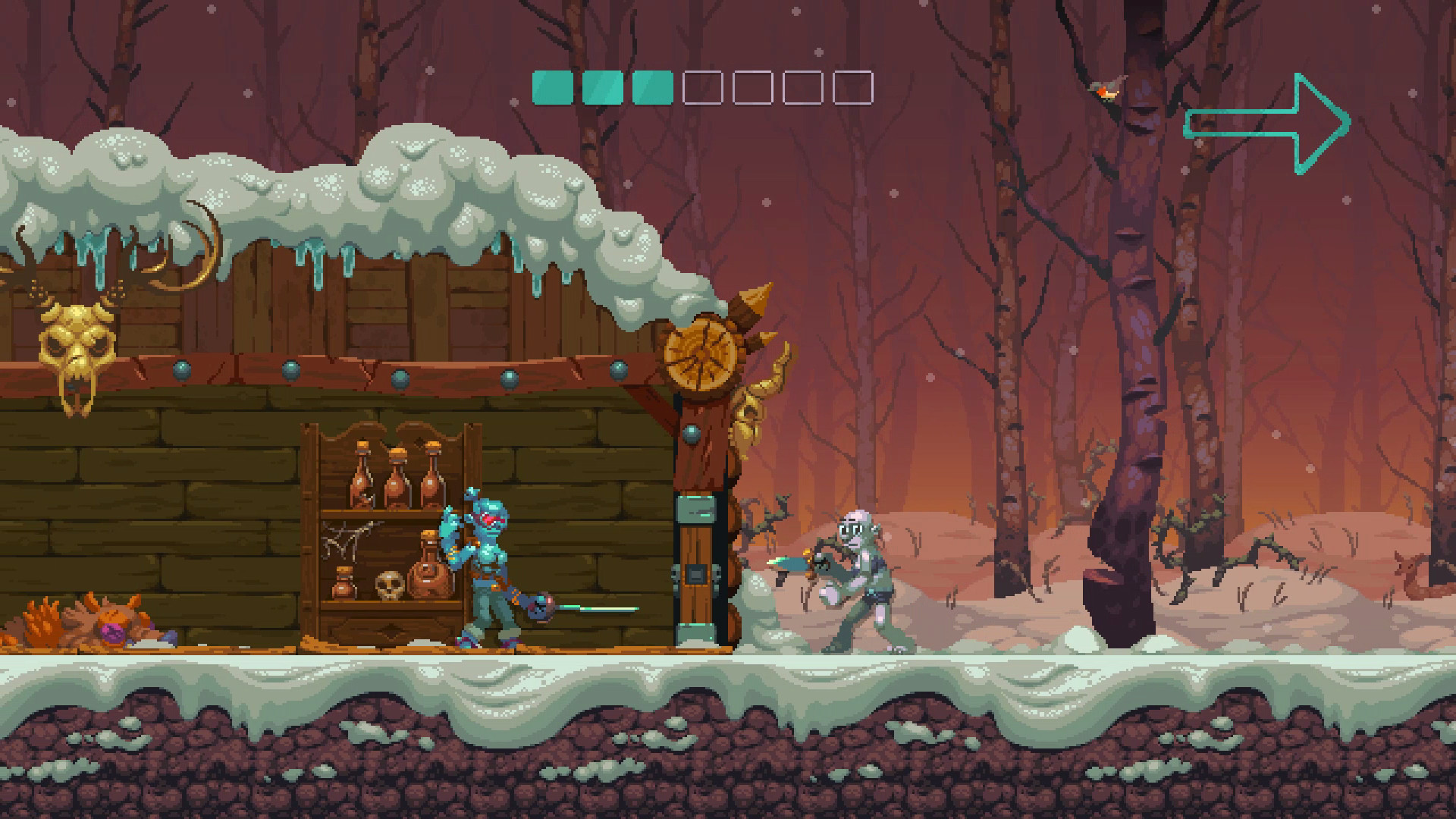 Thankfully, it is possible to deactivate any weapon when creating a local game, so if there is one that you don’t like. you can just make it disappear and it won’t stop your fun anymore. Furthermore, there are very cool mutators such as low gravity to tailor the experience. You can even limit the options to only thrown weapons! This one is actually quite fun. You can also choose maps among a selection of 10. Ten! That’s nice. However… However… Well, the differences between them in terms of gameplay are very subtle. It’s mostly just a matter of more or less doors, and sometimes a few quirks like the high grass. It all seems a bit weak in comparison to the maps in EggNogg+ that incorporate a lot of environmental hazards. And also hilarious bouncing swords! Somehow I still enjoy EggNogg+ more, but I digress. My favorite map in Nidhogg 2 is the airship because it is visually amazing with ships in the sky and a gruesome butchery for worms. Non-content with the visual goodness, there are conveyor belts that end in meat crushers in which you can fall in. Ouchie. I wish all the maps had dangerous traps like this one. At least the “scenes” are larger than in the first game, allowing for more back-and-forth.

Many of the maps are a feast for the eyes, and sometimes a feast for the ears as well. Nidhogg 2 went away from the minimalist psychedelic art style of the first game and dived into a grotesque and bizarre world with odd shapes and colors. Many people complained about it when there were the first screenshots, but in movement, it’s really gorgeous to watch and absolutely unique and wonderful. I will also make a case for it that in comparison to the old style, it allows to see better the fighters on the background, it looks funny and will greatly help the audience to laugh at the expense of the fallen players, and it allows for interesting environmental story-telling. Through the levels we can see a little bit of the life and mythology of these worms in the world of Nidhogg. 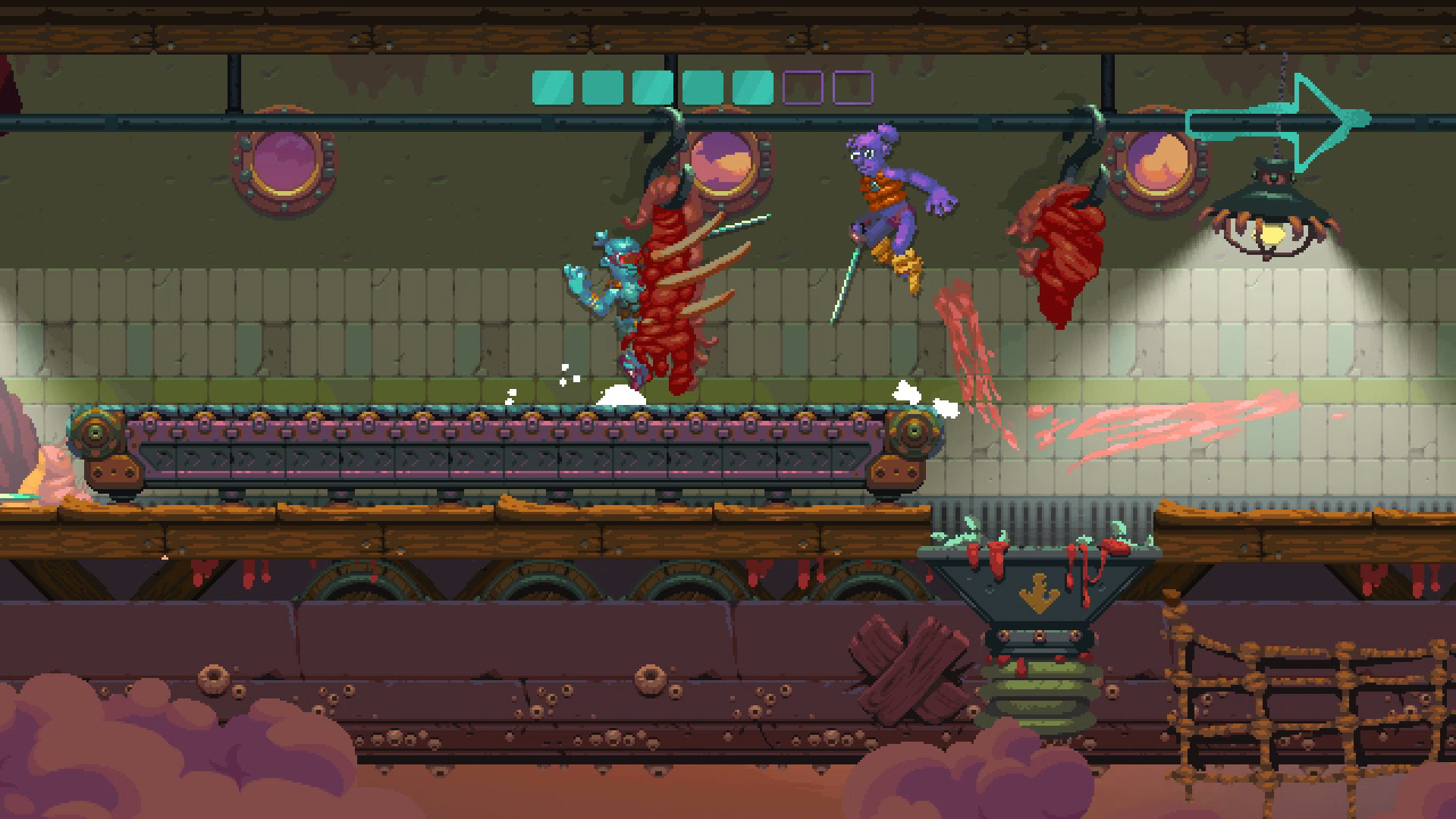 It’s not all rainbows

However, on a technical side the lush backgrounds can sometimes lower the framerate a little, especially the flames at the end of the Castle – which is surprising considering that the game is upscaled from a low resolution. And there is also that annoying “FINAL SCREEN” disclaimer that covers up most of the screen. Since we are on a technical rant, the options menu to rebind keys is a bit messy to use at the moment, requiring the mouse to be used while the rest of the game is controlled with the keyboard or a gamepad. But hey, at least there are re-bindable keys and that’s great! And I kept it for the end, but there is a major issue with this game…

Online play should be renamed online unplayable. This is infuriating since this is the exact same mistake that the first Nidhogg did…. Being released with a broken netcode, as if both players had a very low framerate. That will not prompt me to tell you not to buy this game since local play is where the heart is, but you absolutely need to keep this in mind if you intended to play it online: wait until the issues are resolved. Although… for some people it works just fine, so maybe you can hope for the best and refund if you are not satisfied. 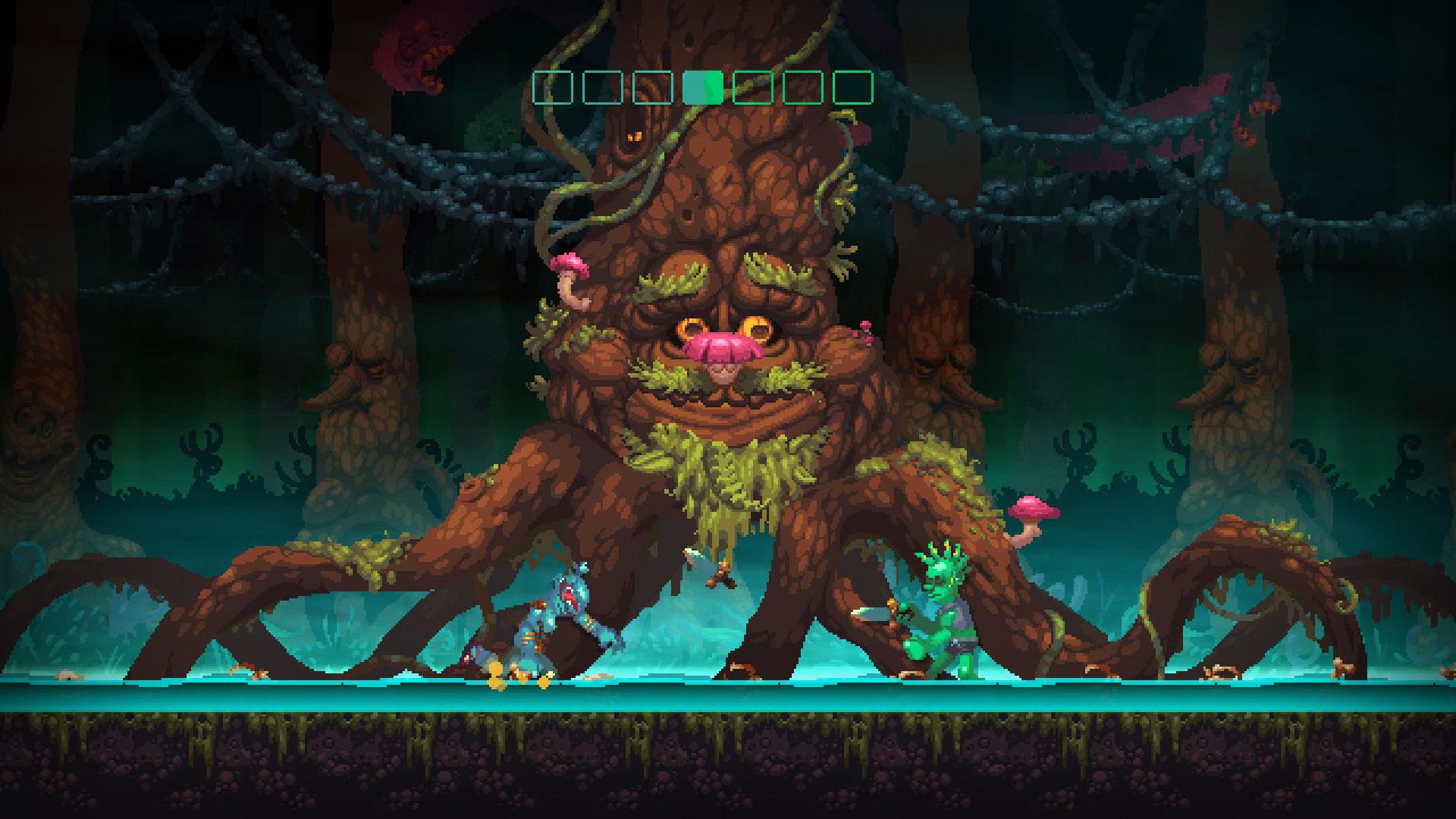 Finally, there is an arcade mode to battle increasingly strong AI opponents in all the maps and using different sets of weapons. There is a leaderboard to rank players according to how fast they beat it, and it can be done in between 10 minutes to 1 hour according to how good you are. Just be careful not to quit an ongoing match, because then the game will not save your progress and you are screwed. I also wish that you could just choose a map, weapons and AI difficulty rather than being locked to Arcade if you don’t have a non-imaginary friend available. 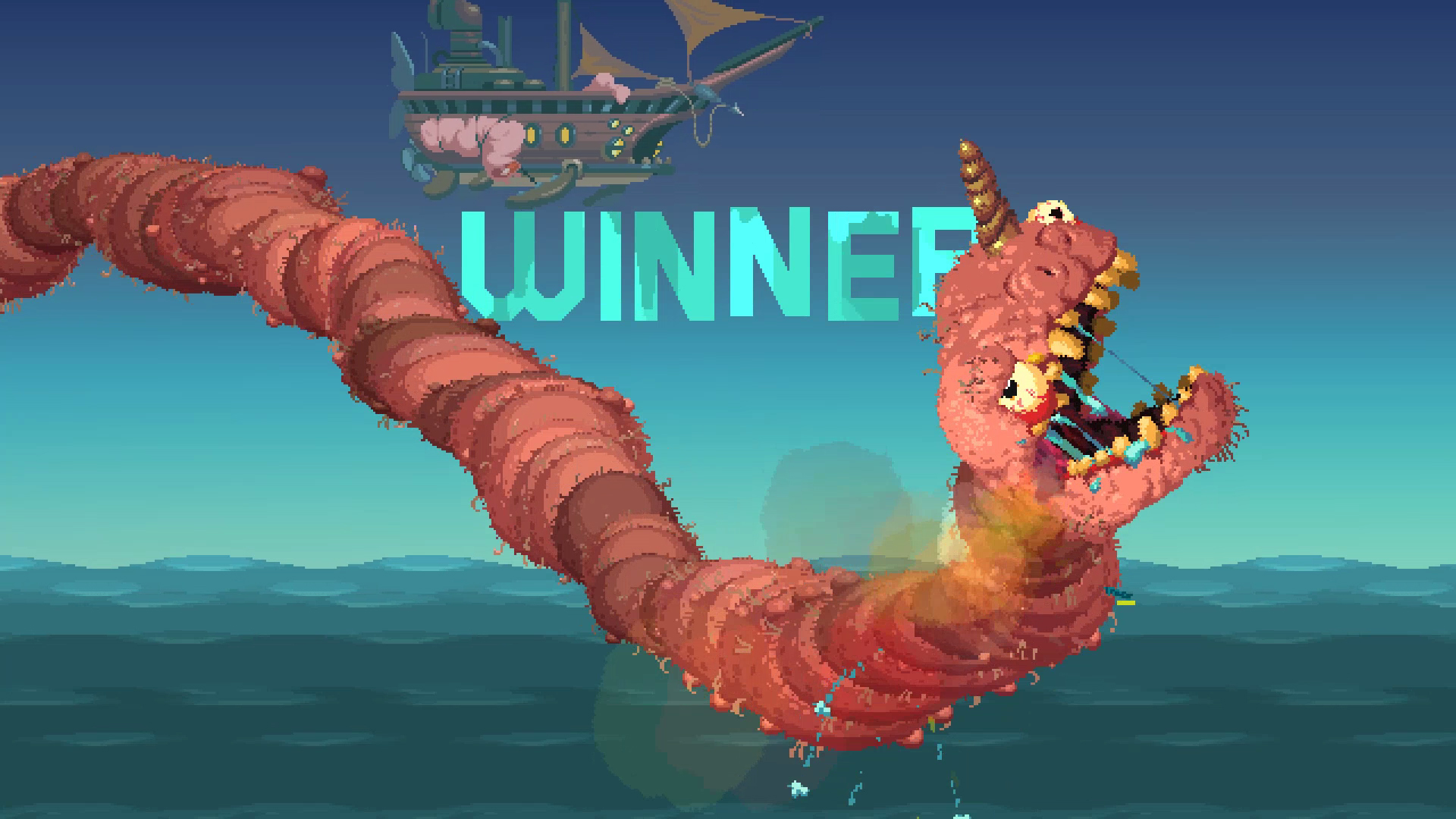 Nidhogg 2 is better than the first game. The game mechanics are more balanced to prevent players from running all over the place like killer bunnies, however, the new weapons bring their own imbalances to the fold. They add to the shifting dynamics of the game, but they are not all so pleasant and it is thankfully possible to disable each of them in local play. Sadly not in online play, but the netcode is so broken that you should definitely wait before buying the game if you wanted to play it online. There are a lot of beautiful maps, but most of them lack dangerous hazards to spice things up. If you are into local games and you have physical friends to play with, I definitively recommend Nidhogg 2.