Pathfinder Adventures is a PC version of the card game from Paizo. Read on to find out if it’s worth adding to your collection.

In Pathfinder Adventures you take charge of a group of heroes as they uncover a sinister plot threatening the land, and seek to undo it, encountering mischievous and deadly creatures and wily enemies on their way.

You’re able to choose the number of heroes in your party as well as the individuals. The characters range in appearance, abilities, and personality, with each one changing the script of the game as you play. If you want to take on the game with a solo character then you can, though I wouldn’t recommend it! More is not always better, though; the game recommends taking the middle ground and playing with three or four characters.

No matter what you choose, the adventure is an epic one, and will take many, many hours to complete.

The graphics in Pathfinder Adventures are very polished.

The interface is a little confusing to begin with, but I became used to it fairly quickly, with the different sections of the screen well represented and most icons being easy to understand. I did have some difficulty with evading encounters to begin with, though.

Card art is beautiful — presumably copied from the physical CCG — and characters and location backgrounds are very nicely drawn, too. Dice are quite nice looking, though look a bit slippery when they’re rolled. Effects are fairly minimal, but work well.

Graphics options are all but non-existent. 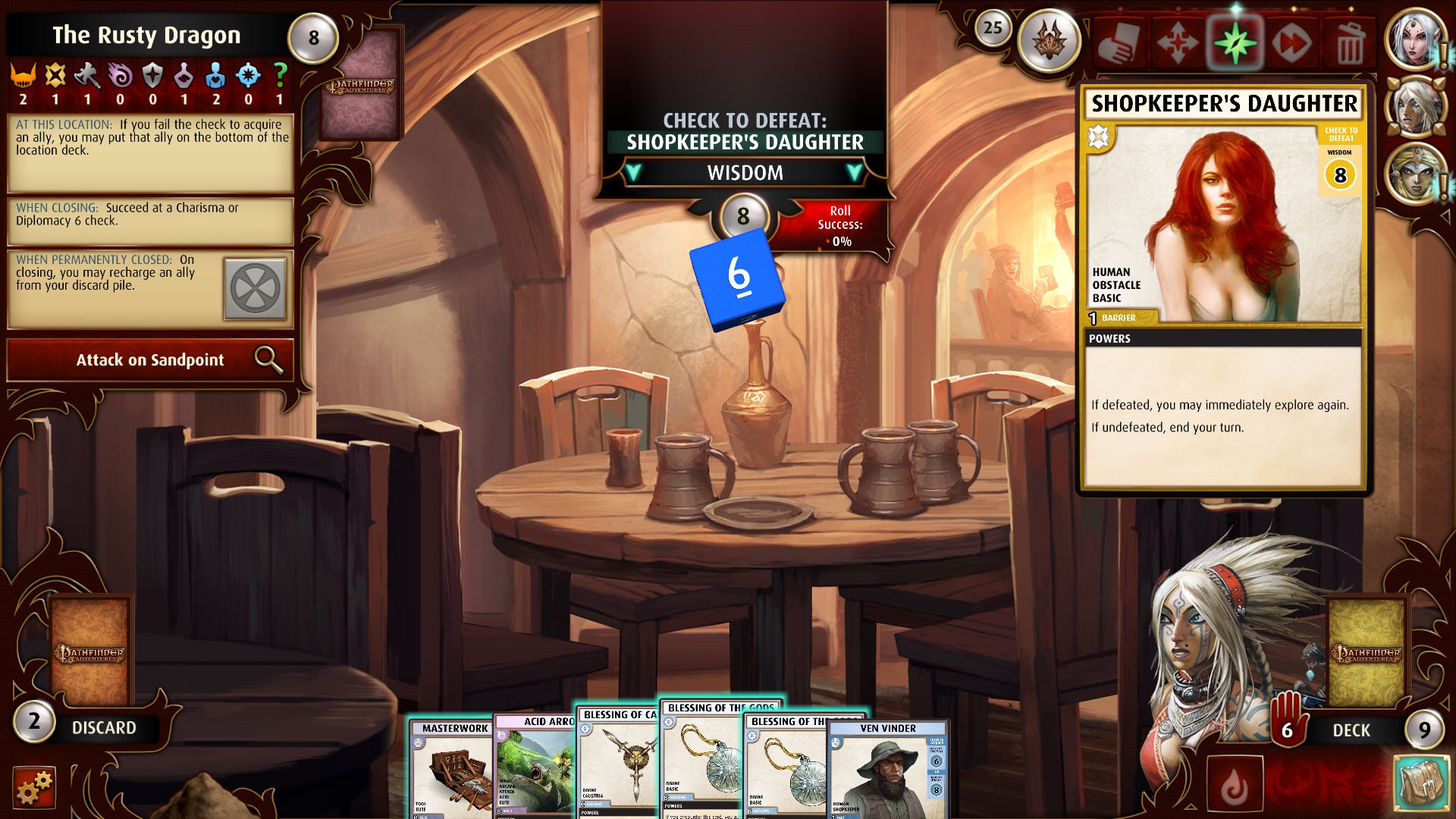 The title music is pleasant, while uplifting: a better produced version of something you might hear being played at a local mediaeval fair. In-game music continues the theme, with high production values and tracks that fit the fantasy material well.

Sound effects are relatively few and far between. What is here is quite nice, but minimal. There’s not really a need for anything more, though. 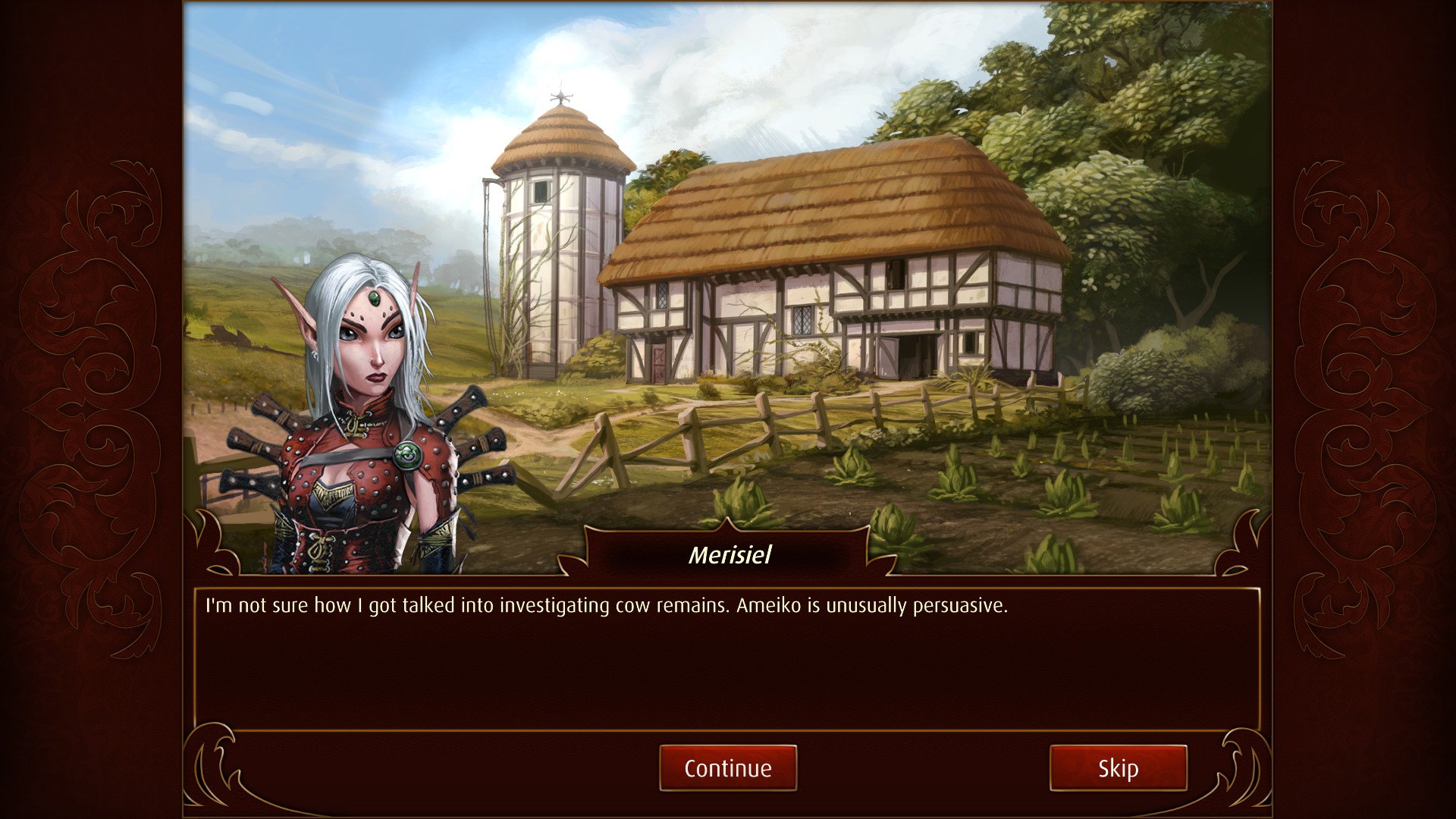 I’ve never played the CCG upon which Pathfinder Adventures is based, so I don’t know how closely it sticks to the ‘proper’ rules. I’ve played other CCGs (both computer-based and physical), but I found this game’s rules a bit confusing to begin. I think I have the hang of them now, though.

The base game is a single campaign — Rise of the Runelords — divided into seven chapters, each made up of a number of scenarios, with 33 available in total. Once you won a scenario you can also go back and play it at the next hardest difficulty level, of which I think there are three. I’ve been playing for over six hours and I’m only half way through the second area, so there’s a lot of time required to win the campaign even at the easiest difficulty. 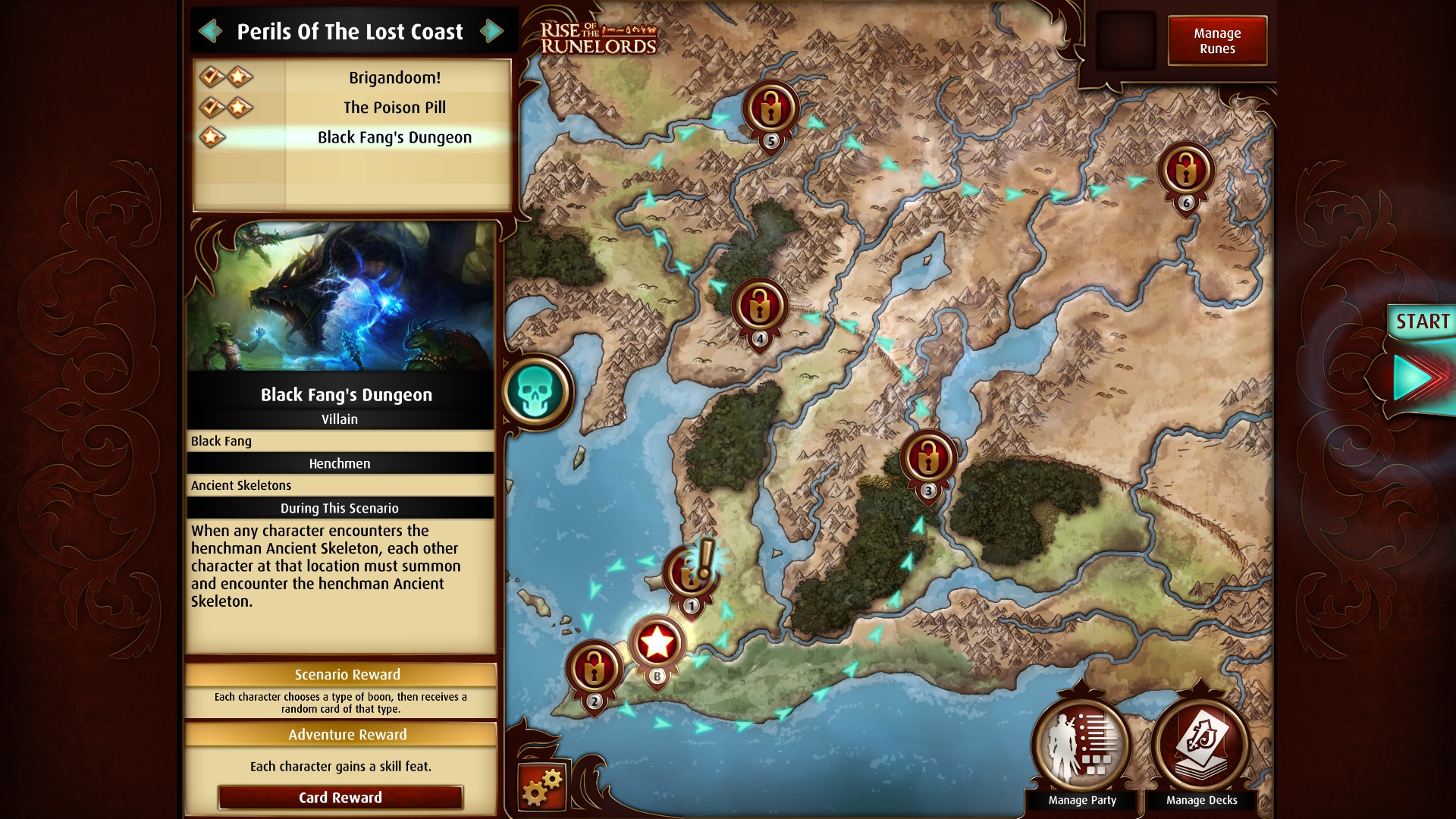 Each scenario has a number of locations to explore. The objective of each scenario is to either close all of the locations or defeat the scenario’s villain, if there is one. The game is turn based, with your characters taking their turns in a cycle, the order of which is determined by you at the start of the scenario. Each turn is divided into a number of phases, which I’ll call pre-move, move, explore, resolve, and discard, since that’s how I thought of them while learning.

A normal turn begins by exploring the location. This is done by drawing the first card from the location deck, which may be something good, like an item, ally, or blessing; or may be something bad, like an enemy or trap. Your character then uses his or her attributes, together with any cards they wish to use from their hand, to acquire, defeat, or otherwise deal with the location card, and then may have the opportunity to explore again. Most encounters result in rolling a certain number of dice. The turn then progresses through resolving card actions, discarding and refilling hand cards, and the turn ends. More complicated turns can have many actions and use all of the turn phases. 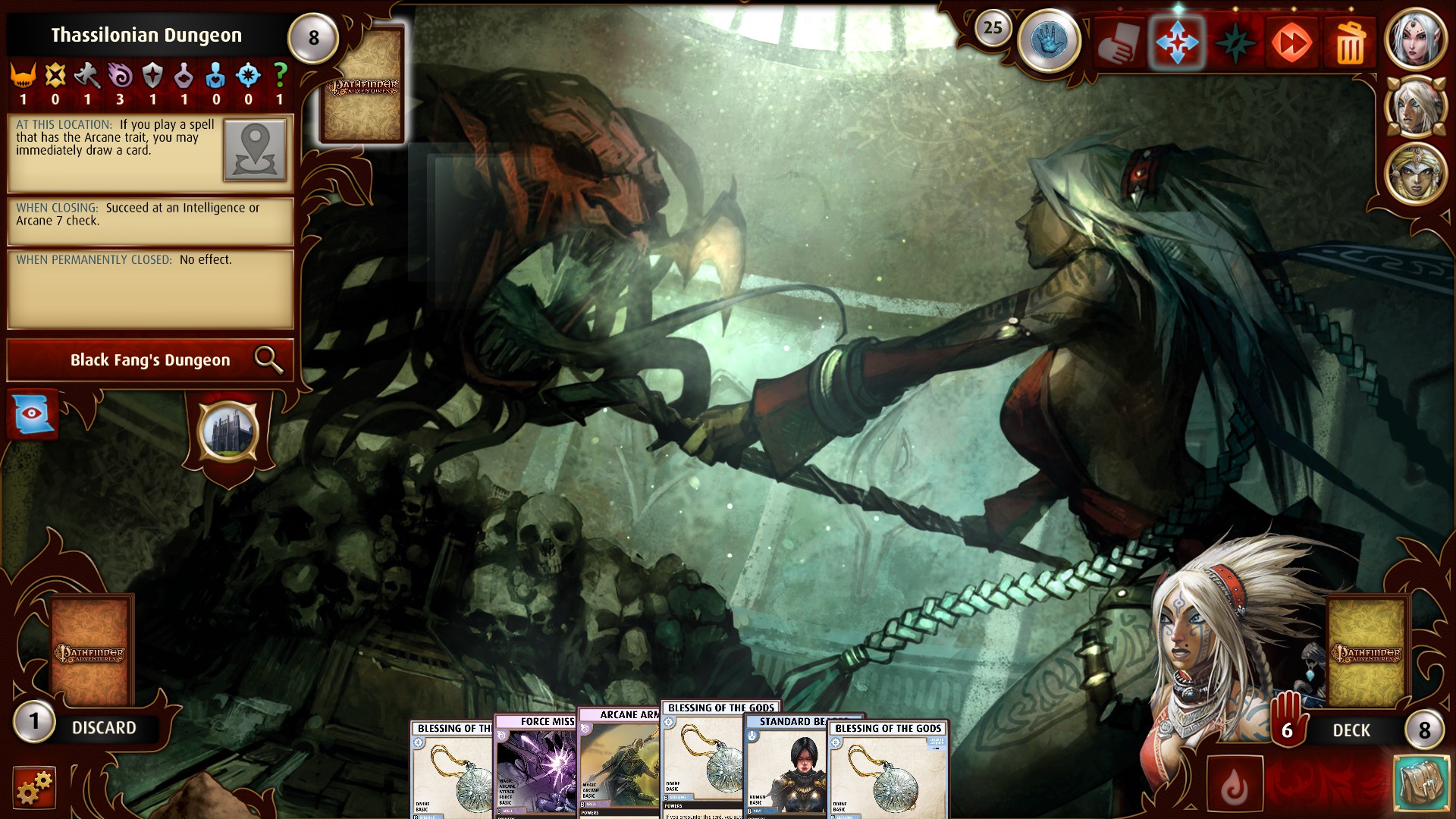 Cards may be used in different ways, which vary in severity. Some uses allow you to use the cards again (reveal, recharge, discard) and some don’t (bury, banish). Combat is played just like any other exploration, using your characters combat skills and related cards. Any damage taken by a character converts to forcefully discarded cards. When characters are unable to redraw enough cards to fill their hand at the end of their turn, they die. There are some funky complicated rules about villains and henchmen, too, but I won’t go into them here.

Different scenarios, locations, and individual cards — of which there are many — may apply special modifiers, benefits, or restrictions on dice rolls, certain abilities, and card use. But once you’ve learned the basics, you should be able to understand these easily when you first encounter them. You lose a scenario by running out of time / moves or all of your characters dying before they manage to accomplish the scenario goal. 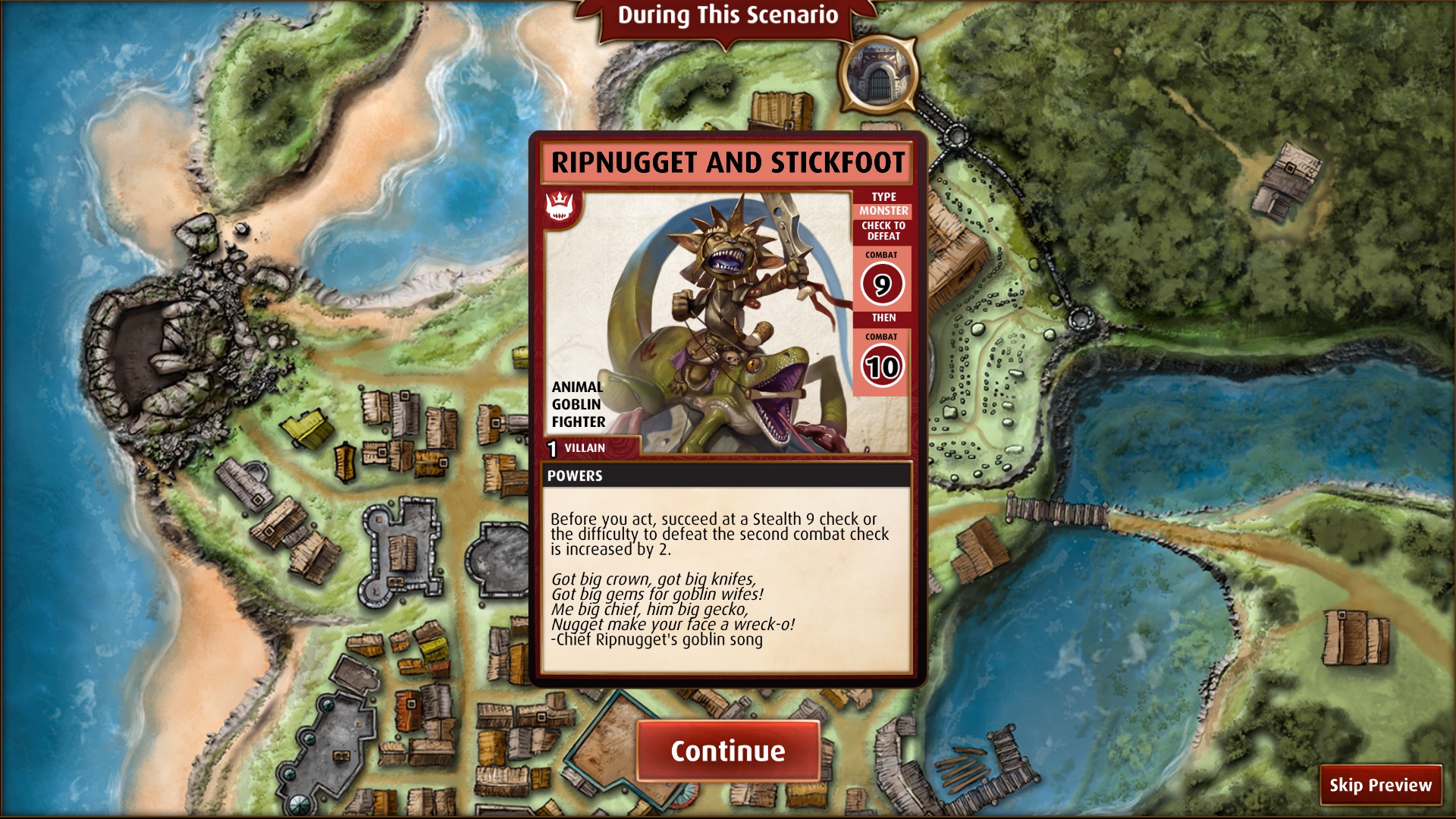 Collecting more and better cards is a big part of most good CCGs, and I thought Pathfinder Adventures would be no different. But it seems that the game is actually designed to reduce this appeal significantly. Each character’s deck is limited at a certain number of cards (15, I think), and each one has to be made up of a certain number of each type of card; your rogue can’t have spell cards, for example. Furthermore, your ‘stash’ — where you hold cards not currently in any characters’ decks — is limited to 10 cards, so you can’t stockpile cards that you think might be useful, hedging your bets for future scenarios. This all makes deck management more fiddly and time consuming than I’d like, but perhaps that’s a part of the CCG upon which this is based.

The game has a relatively short five-scenario tutorial that explains the basics, but leaves out some details. For example, I have no idea how copying blessings works; sometimes the game will let me and at others it won’t. I must also be missing something about the challenges available from the main screen; I’ve completed three of them now, I think, but have never been rewarded for any of them, and the ‘Pickup Rewards’ tab of the window is always blank. By the next day, the completed challenges are gone and I’ve been none the wiser. 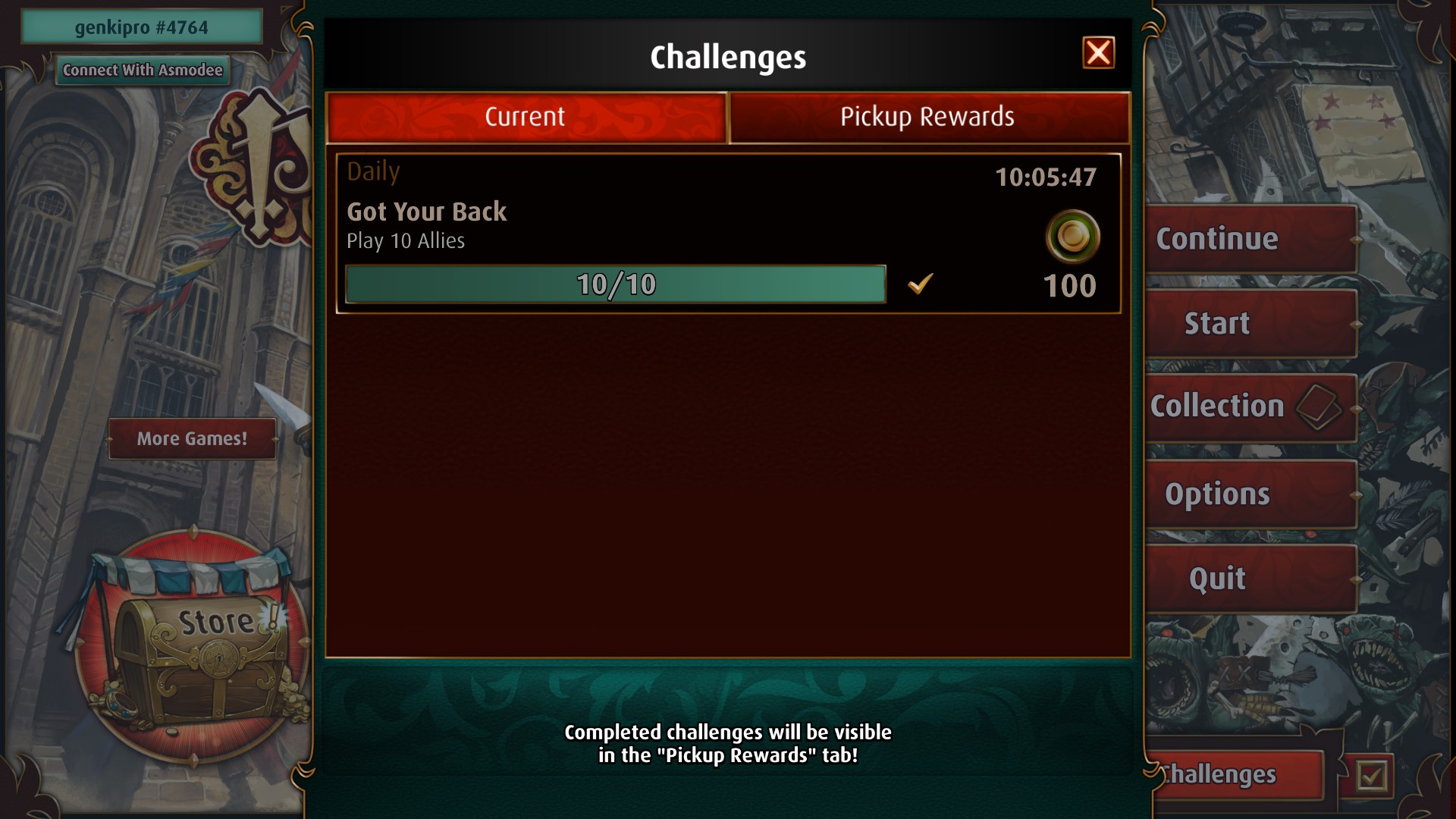 Character progression isn’t explained, either. Each character has an alternate outfit / equipment set, which seems to be available through a paid DLC with a link to buy from the game interface, but I don’t know if that’s the only way to unlock them. Characters gradually get bonus attribute points as you complete scenarios, but they also have second-level professions that aren’t explained in the tutorial, so I don’t know what must be done to unlock them either.

Finally, sometimes using cards doesn’t do what you expect. For example, a ranged combat attack with a crossbow and a blessing can actually get worse when you add an archer, which is supposed to add 1d4. Sometimes this even depends on the order in which you add cards! I’m not sure if this is based on the original CCG rules, but it’s rather confusing at times. 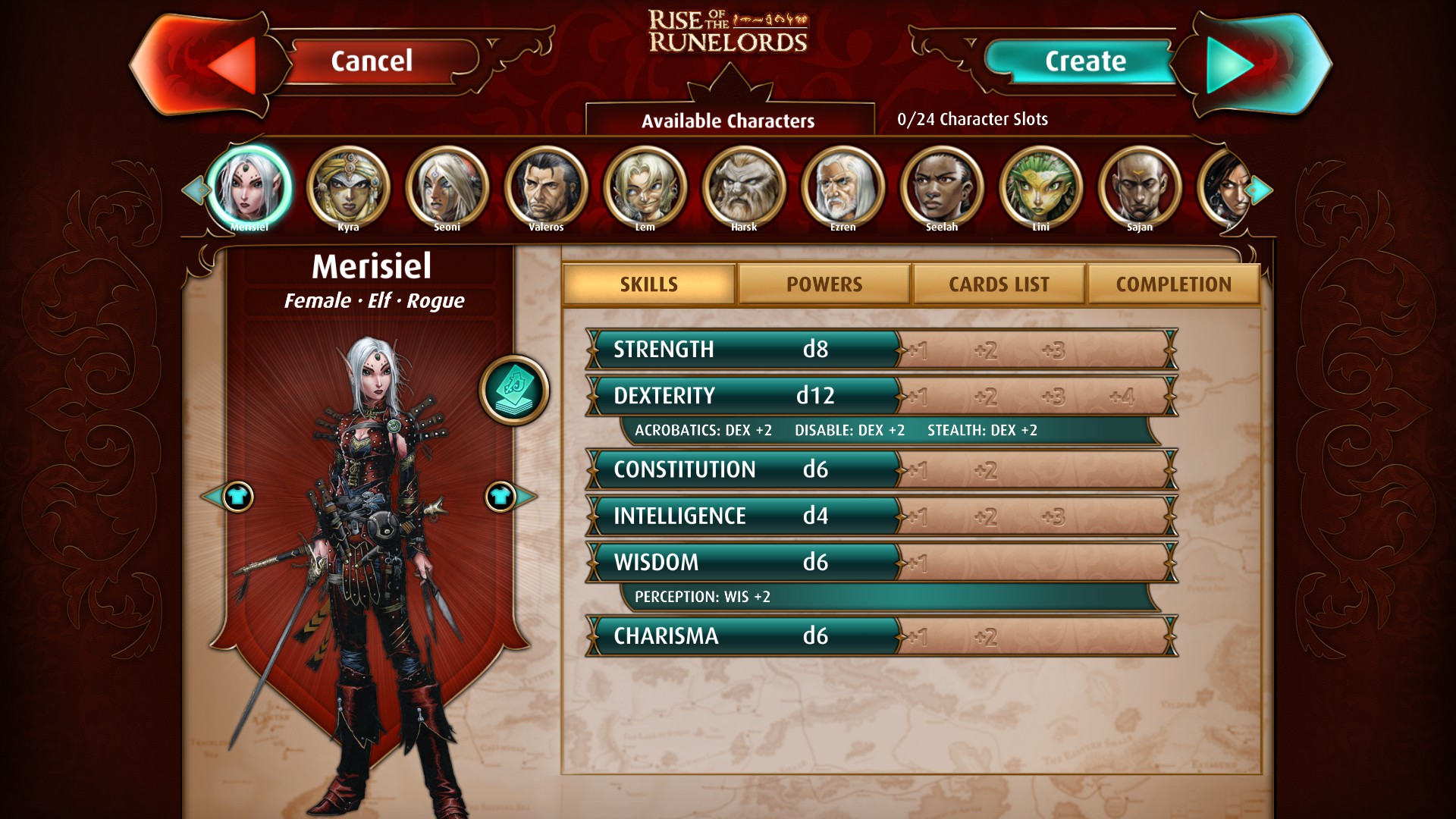 Pathfinder Adventures impressed me. It confused me to begin with, and I don’t like the restrictive deck rules and card management at all, but the more I play the more I appreciate the tactics of the game. The script is well written and the characters are interesting, too. I don’t imagine I’ll get around to finishing the campaign any time soon, but I hope to have the time to make considerably more progress in it.