Gloria Victis is an MMO set in a medieval era of war. Choose your side and join the world-shaping warfare of Gloria Victis, where actions matter in a persistent world.

Gloria Victis is a MMORPG set in a low-fantasy medieval open world, where two major factions fight for territorial gains, changing the landscape of a persistent world. Players can choose whether to be part of the Midlanders faction, merchants and skillful intellectuals, or the vengeful Ismirs faction, fierce warriors from the North. Gloria Victis also simulates a feudal society, where glorious acts can earn a warrior much praise but disgraceful deeds can sentence them to exile as outlaws, hunted by both factions and belonging to neither.

To advance their social standing in Gloria Victis, players can join the so-called guilds. Guilds are similar to what other games might call “parties”,”groups” ,”squads” or “clans”, and allow for cohesive strategies regarding the never-ending war between Midlanders and Ismirs. For example, multiple guilds under the Midlanders faction may organize themselves to flank an enemy castle and start a siege, which may or may not result in a victory. In the case of victory, the besieged castle and the surrounding territories are awarded to the winning faction, permanently changing the world’s map — that is unless a counteract occurs.

Most MMORPGs tend to forget the supply chain factor, as one may guess, taking over a castle requires a significant amount of weaponry, which needs to be crafted by a blacksmith. This leads to another interesting mechanic in Gloria Victis: complex crafting. While in many RPGs it is common for random enemies to drop weapons or the like, it is not the case in Gloria Victis. In order to get weapons, one needs to either purchase them or have them crafted by a skilled gamer, further increasing the roleplaying factor. The reader may ask: “Why bother asking a skilled gamer to make me a piece of armor when it’s possible to just grind some bandits and buy it?”. Good question. Items may have a “higher quality” depending on the skills of the crafter, shown in-game by a [+X] suffix on the item’s name — [+1], [+2], [+3] and so on 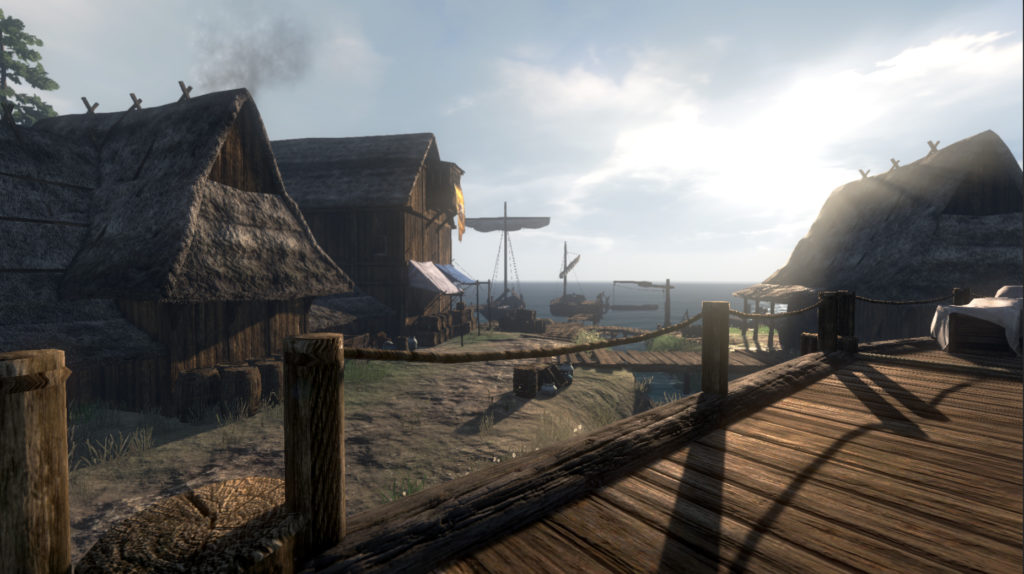 All that does sound amazing, no doubt, but when considering the game is an MMORPG that has most of its mechanics based on massive cooperation among multiple players, it is normal to wonder about the player base. If there aren’t enough skilled hands to cooperate, how can massive deeds be achieved? An interesting question and one SteamCharts can explain. In the Last 30 Days, there were 83.5 average players, very similar to June’s 83.4 average players, which was an impressive 26.26% gain when compared to May. The majority of the player base is located on the North American server, by far the most populated of the six, but that doesn’t mean no one uses the other five servers. While the majority of the player based might be on the North American server, there are still players on the other five, somewhat spreading the player base more thinly.

The mechanics sound great and there are enough players to have fun with, but how does that all work in practice?

A PvP mode is crucial for an MMO medieval game, otherwise, the gameplay would eventually go bland and dull. Why? The extra challenge of facing an intelligent opponent instead of AI adds up to the fun. While AI might be challenging sometimes, it does so by either cheating or being unfair. During a Player-vs-Player fight, it is a fair dispute where the most skilled — in-game or otherwise — wins. The PvP factor is even more important given Gloria Victis is an MMO, where duels among top-ranking players create legends. It would be a grave sin for Gloria Victis not to include such a feature. 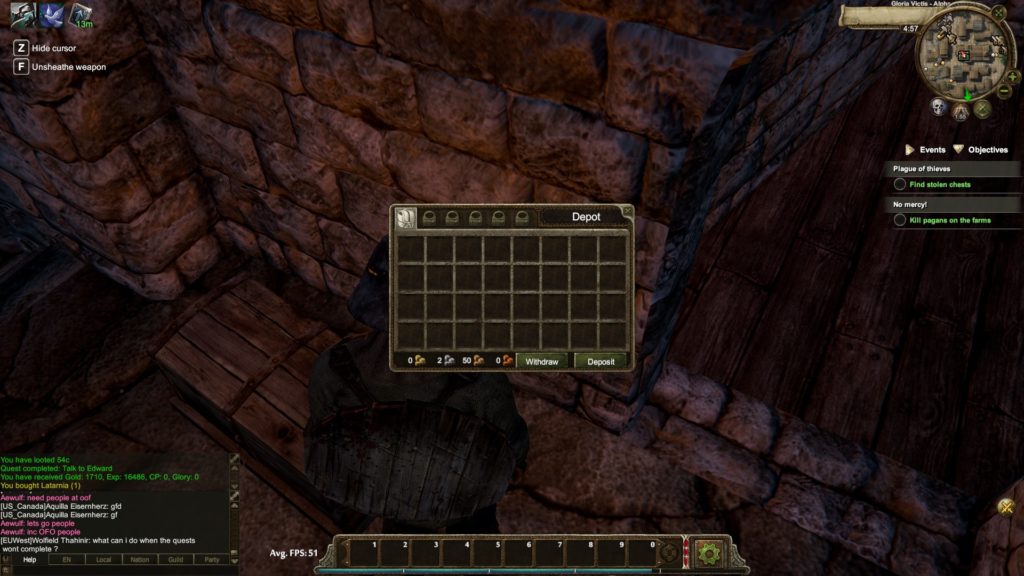 That feature not only makes for a more enjoyable experience overall,  but it’s what actually makes the game exciting. Entering the fray along with guild mates against dozens of invaders – or defenders — in some meaningful combat, where the outcome of the battle shapes the in-game world of Gloria Victis, constantly changes the warfare as leaders come and go. Not only that but engaging in PvP might incur the loss of items, as the items drop on the ground for the taking. But, of course, it’s not that simple — there is a time and quantity limit to player looting.

Gloria Victis wouldn’t be as fun if it were simply cooperative PvE against random creatures or bandits harassing poor farmers… but it doesn’t forget that, either.

For those not too keen on fighting other peers, it is possible to engage solely against in-game entities, what is known as PvE. Following a system of quests that send the player all around the map, forcing them to adventure onto lands that may — or may not — be safe. Every quest completed sends you further and further from the initial town, usually with simple objectives such as helping a priest harvest his bees. In any single player RPG game, such simple objectives would not be thinkable, as the player is usually portrayed as a great hero or the like. In Gloria Victis, they are but another warrior in a war-torn land. The PvE system also rewards gamers with improved armory when compared to the merchants, as mentioned above. The quests might award weapons or armor with quality modifiers such as  [+1], [+2]. [+3] et cetera. 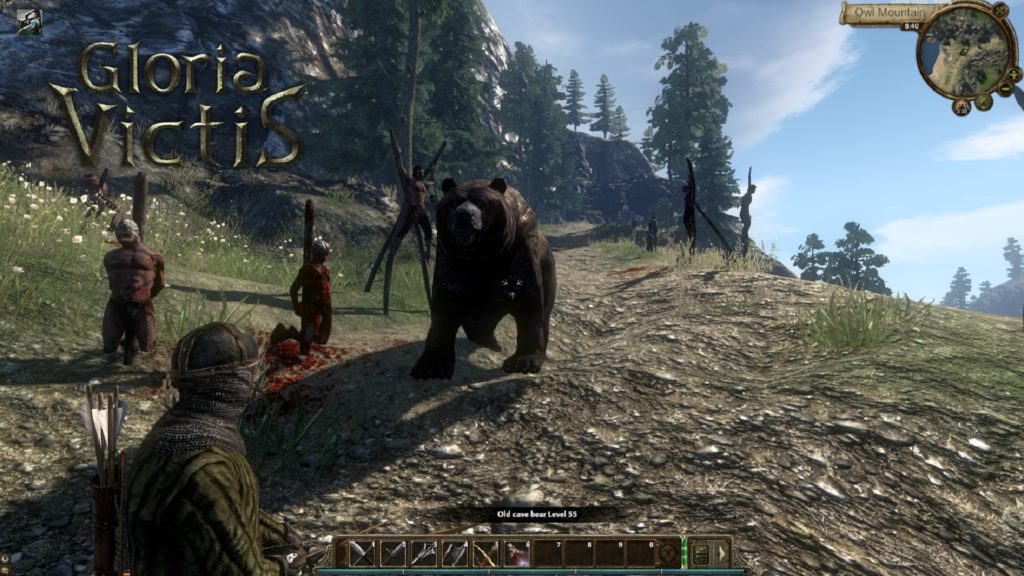 How is the performance?

Gloria Victis performance is definitely not the best, having difficulty attaining 60 FPS. The PC used for reviewing — while not the best — is not a toaster. Running Gloria Victis on a i5 CPU and GTX 960 GPU proved a bit difficult, and, in the end, a mix of Low and Medium settings was necessary in order to get close to 60 FPS. It’s not very pleasing to play a game on Low-Medium, but it’s important to take note the game is still in Early Access, and may not run well for some people. 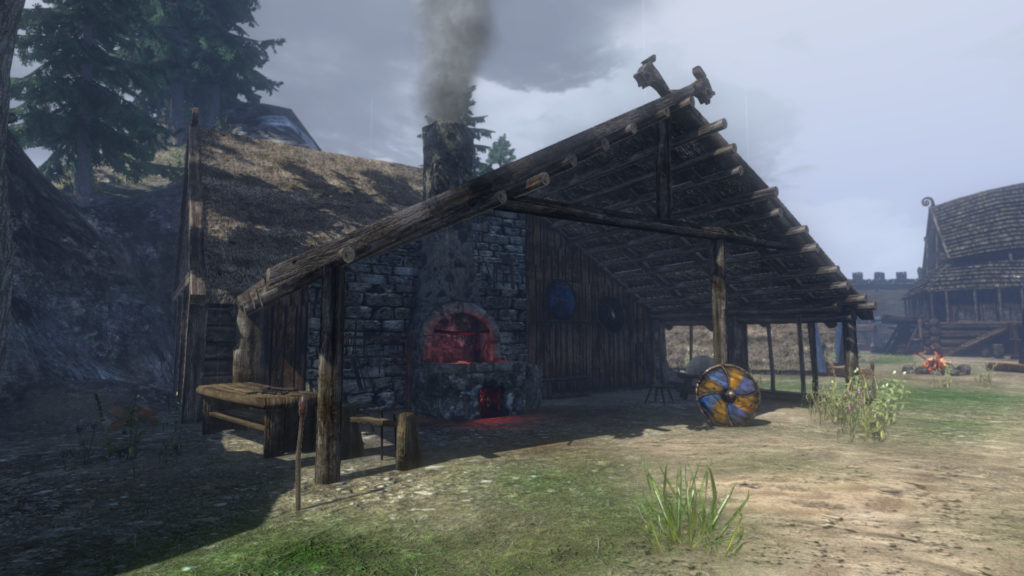 It’s an MMO — how is the community?

It’s commonly a good sight to see a community so supportive of their developers like Gloria Victis‘ community, but some people tend to be a bit overprotective. While they might be a small minority in-game, it is important to mention it to those looking for a review in order to decide whether or not to buy the game. A good rule of thumb to go by is to not mention, in-game, dissatisfaction or disappointment at the game’s features or bugs. There will be feedback, but it won’t be very friendly. While it’s fair to say judging a game so early in development for a lack of polishing here and there might not be very logical, there is a tendency of hostility among certain peers. (Do what you must, but don’t bring up mounts on the chat. really.)

Apart from that, they tend to help each other a lot, so it’s heavily recommended to join a guild, as they will likely help to level a character, giving precious advice or better gear for starters. Don’t bring up the mounts!

Unlike other roleplaying games, Gloria Victis does not enforce any sort of class restriction upon players, and they are free to design their character as they please. They might choose to go the path of an outlaw and live in exile after committing crimes (Killing other people, similarly to DayZ), or define their own stats and skills to create the ultimate soldier or guard or archer, although those weapons are not restricted. For example, a heavy soldier, the guardsman, may wield a bow if they so please, while performance will not be adequate. Gloria Victis doesn’t try to limit one’s creativity and, instead, let them enjoy the true freedom of choice regarding equipment. 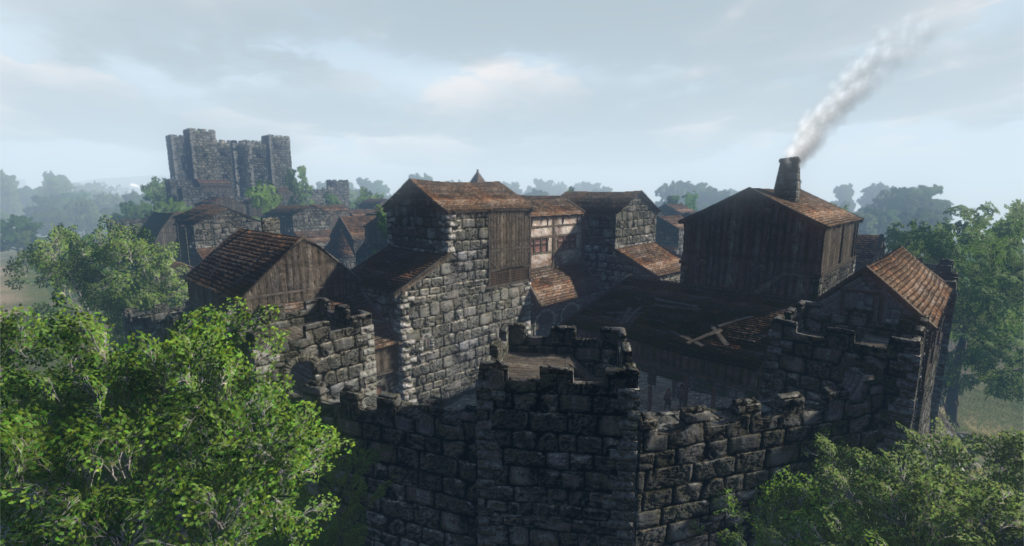 Of course, like any RPG-intensive game, it has its classes. When creating an in-game character, it is necessary to choose a class before starting an adventure, and the game has a sort of a quiz to know how the players want to play the game and then it attributes a class, which is optional and the player is free to change. By selecting a certain class, the character starts with a pre-defined distribution of points among its perks. A guardsman will have way more points distributed on strength, while an archer, by default a long-range unit, will have more points distributed towards dexterity, improving its usefulness with bows.

While Gloria Victis is in Early Access – and it shows — it’s core gameplay and concept is already there, and MMO fans looking to participate in the never ending conflict between Midlanders and Ismirs won’t be disappointed, if they manage to look past the eventual broken quests, bugs and flaws. Gloria Victis definitely shows potential and with new features and polishing it will become a very entertaining game. Gloria Victis will please MMORPG fans looking to participate in a medieval war on a persistent world with fellow comrades, and considering it’s relatively low price tag, it is certainly worth adding to the Steam Wishlist for reference in future sales. 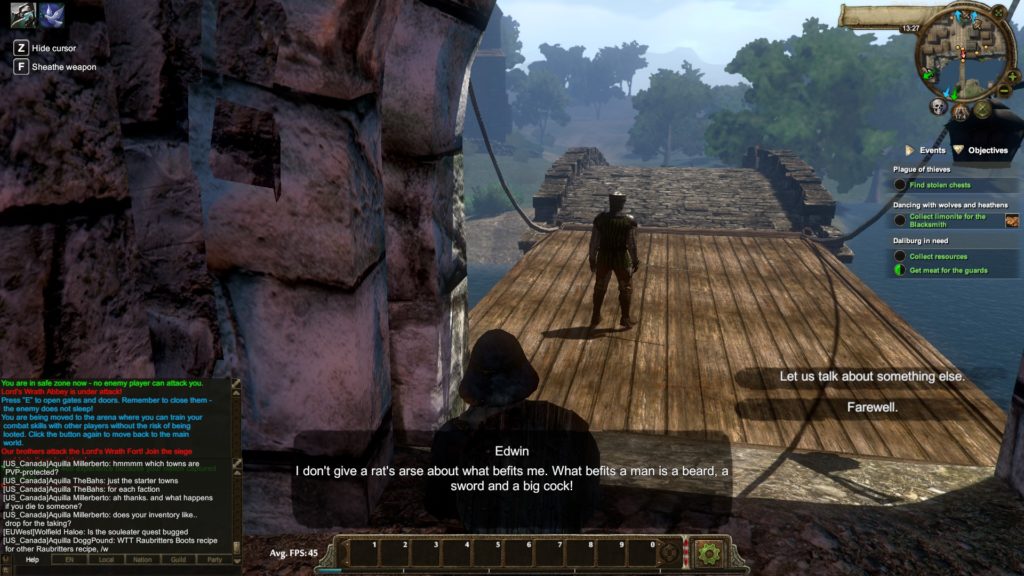 It is hard to have a definite say on Gloria Victis, warranting it a “Preview” instead of the conventional “Review”. But just for the sake of comparison, if it was to be rated at its current state, it would be a 6 or 7 at best. Keep note that the game is still in Early Access and has more content coming over the months, such as player housing, naval warfare and full-scale siege combat. For now, those willing to have a taste of what Gloria Victis has to offer will have to content themselves with it’s Alpha, available on Steam for $19.99 USD (Regional Pricing applies).