A nasty early game trudge almost buries what is a unique and interesting RPG that will see you puzzle out battles in one of the more unique approaches that I’ve come across.

Okay. Admissions time. I was ready to give up on this game, I was a good way into act two and was dreading yet another single character mission where I would take my turn, wait out the AI doing its thing, and then have to try and navigate the mess the AI had left behind. Because all the fights up to this point only had you control one character I would have been rightly ready to dismiss this game as running on a clever gimmick that doesn’t explore the depth and nuance of what it offers.

Then finally a “team” mission pops up, and it’s like the curtains are finally lifted on what you can actually do with this system. I was practically ready to give this game a Quit rating, and there’s still a good case for it because Act 1 is such a slog, but the payoff in Act 2 when you FINALLY get the ability to manage multiple characters on the battlefield is almost, nay, is worth it. 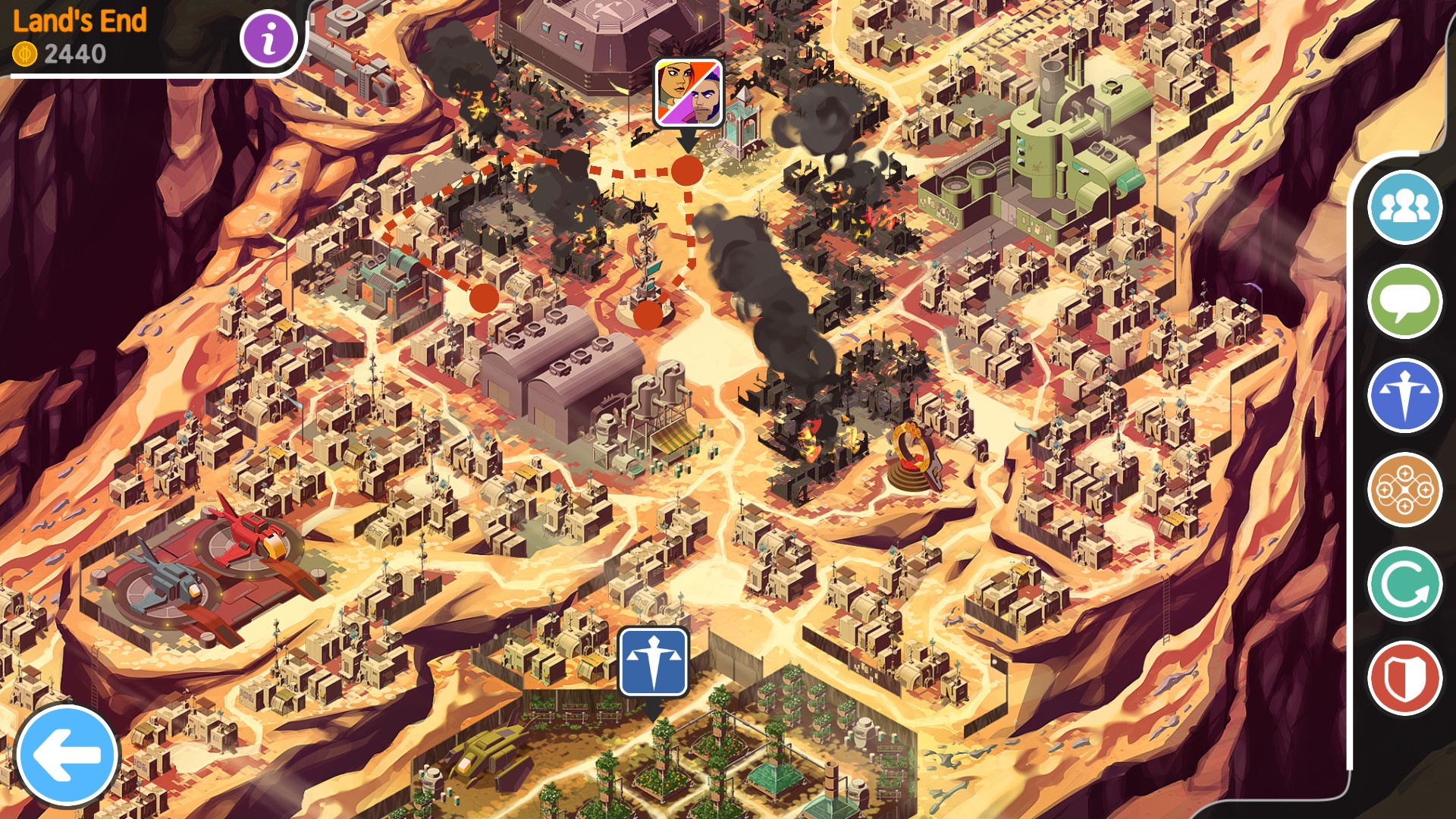 Ticket To Earth is primarily a turn based arena RPG, much like say, Final Fantasy Tactics, where you control one “side” (the heroes), and the computer controls the cannon fodder (the bad guys) and your job is to fulfill the objectives that are presented and optionally, challenges for talent tokens that let you level up your heroes and make them ever more efficient tools of death, doom and destruction. The two heroes you meet in the early acts are Rose and Wolf, Rose is a civilian who gets caught up in the plot and becomes a Peace Keeper to try to put a stop to what’s happening, Wolf is sent in as reinforcements. Rose presents as a very likeable character, with solid dialogue between herself and her friend Xenia who she’s trying to keep alive amidst the ongoing chaos. Wolf is almost typical Anime young male hero material, overconfident and overeager, and then willing to duck for cover when he realises he’s bitten off more than he can chew, I’ve not got so far as to see whether he evolves later, there’s a chance he will given that the writing thus far has been on the “above average” side, if not actually good.

The two heroes you meet in the early acts are Rose and Wolf, Rose is a civilian who gets caught up in the plot and becomes a Peace Keeper to try to put a stop to what’s happening, Wolf is sent in as reinforcements. Rose presents as a very likeable character, with solid dialogue between herself and her friend Xenia who she’s trying to keep alive in amidst the ongoing chaos. Wolf is almost typical Anime young male hero material, overconfident and overeager, and then willing to duck for cover when he realises he’s bitten off more than he can chew, I’ve not got so far as to see whether he evolves later, there’s a chance he will given that the writing thus far has been on the “above average” side, if not actually good. 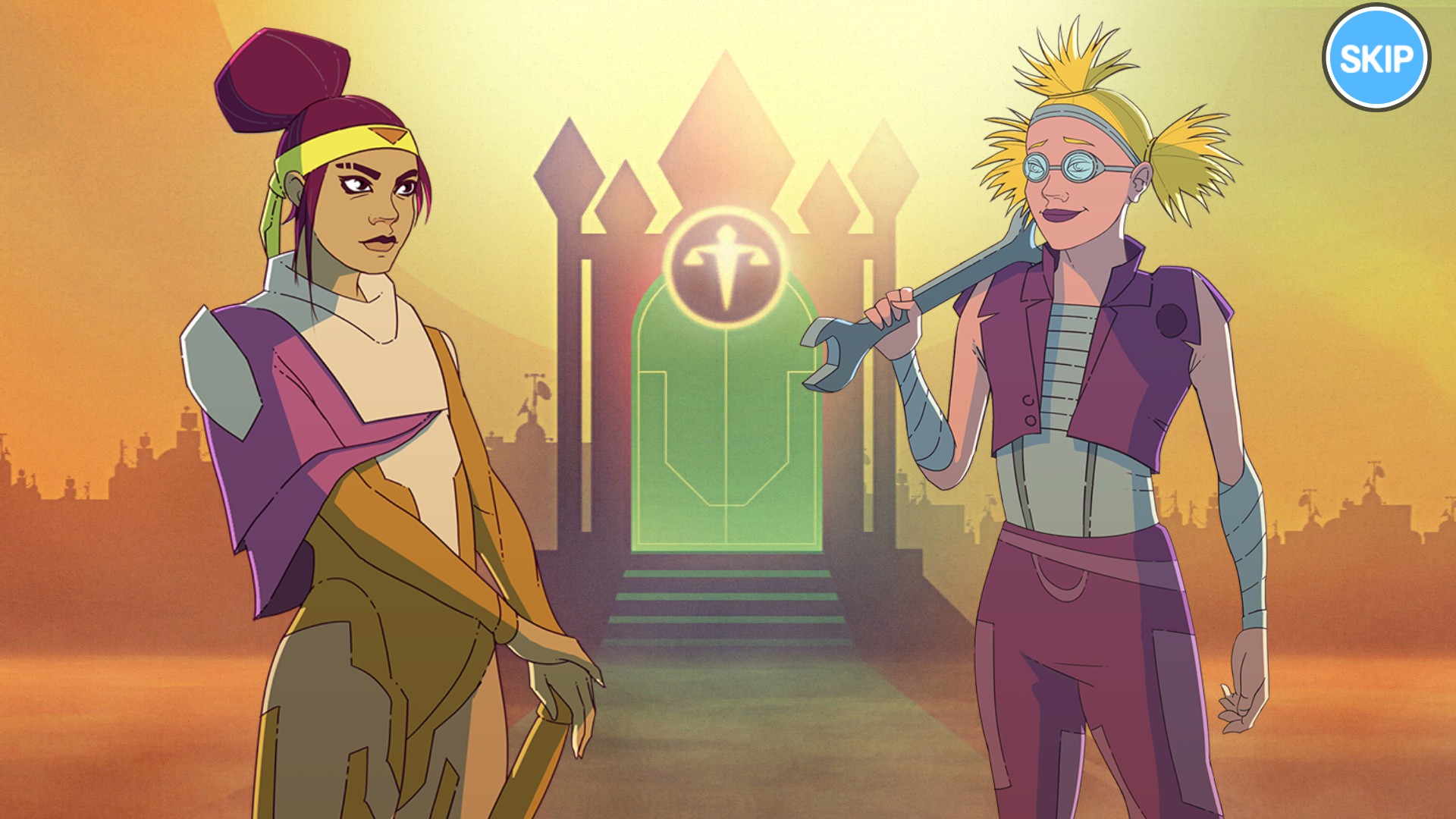 Most of this is window dressing, the vast bulk of the game will be played out on the fields of battle, isometric grids that look like diamonds with some tweaks for landscape or obstacles, with you and your opponents moving across it. Here’s where Ticket to Earth becomes different, unlike most games where you’d just move where you like, the game transforms this into a puzzle style environment by painting the grid with four different colour tiles that you need to navigate, you can pick any colour tile to start on, but once you step on one, you need to keep moving along the same colour for the rest of that particular movement, so for example, step on a red tile, the rest of your move must be on red tiles. In order to move quickly from end to end, you’ll be looking for strings of tiles that link together, and they may not always be the colour you want, but those combos charge up your attack that much faster and keep you mobile. It’s a great system on paper because it forces you to plan ahead and with clever use of skills, you can create opportunities to close in, make powerful strikes and then be in a good position for the next turn.

I say on paper because there are two critical flaws with the game. One vanishes early on. The other doesn’t. Both tie into each other so here’s the issue in detail. For all of Act 1 and some of Act 2, you’ll be controlling a single hero on the battlefield, this means you are entirely reactive to everything the AI does, when the AI controls four to six opponents, they will move, randomise the tiles they’ve moved over, and then come to a stop. By the time all these AI pawns have finished moving, the battlefield will likely have big chunks rerolled, and lanes that were once useful are now no longer viable. 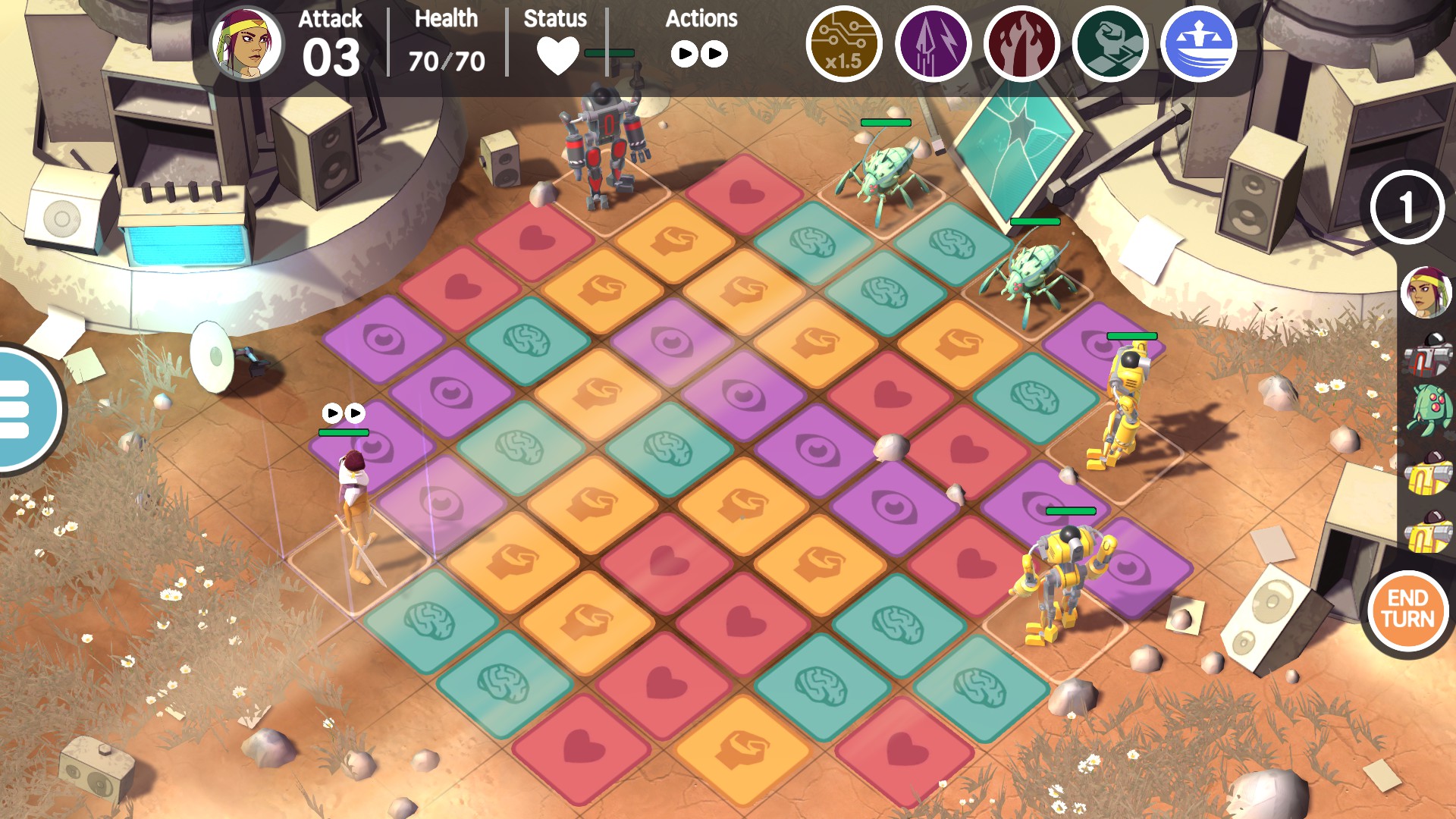 When you finally get Rose and Wolf working together you can use whoever acts first to clear out some routes for the second person or use their abilities to create paths where they didn’t exist before, opening up team play that actually make the game vastly more strategic. This shifts the game from reactive to somewhat proactive, you finally can exert a degree of real control over the battlefield. The but, and I’ve mentioned this, is that the AI messes up the battlefield on its turn, so most of the plans you create last a maximum of one turn before the AI wipe away the tiles as if they were scratched on sand.

This is particularly infuriating during the first act of the game, where often a lot of the bonus objectives can be fouled up simply by the AI making specific moves that wreck tile paths or simply by bad luck, this can even make the primary objectives difficult to achieve on account of being limited in how you can move and how you can react. Having only one character means you’re entirely at the whims of the AI and lady luck as to whether the playfield will offer you useful or even viable moves each turn. It’s only when you have two characters that you can meaningfully influence the playfield that the game genuinely comes alive.

So what we have is a tale of two games. The first act and a big chunk of Act 2 will have you slogging through some fairly ordinary and some damn frustrating ones as well, before you come into the game proper and things open up once you start getting to control both heroes and you can actually create double plays and influence the playfield in meaningful ways, at that point the game goes from so-so to genuinely interesting and unique.

Where does that leave us? A tricky place. As long as you can stomach the fact that the first Act is practically a Final Fantasy-esque tutorial that will possibly grind your gears to a significant extent, then you will find an excellent gem in the rough, especially as the team play missions really do make for great fun, but that first Act, I don’t think I’ll ever miss dealing with that.

Verdict: There’s a genuinely good game here, and bits of it show through even in the early stages, but good grief, controlling -one- hero for all of Act 1 and a good slice of Act 2 is purgatory, the payoff is great and all but that’s going to dent the enthusiasm of a lot of gamers. If you can stomach the early game stuff, then go for it, the price point – £10.99 or your regional equivalent – is well within the tolerance I’d accept for having to deal with that early game push, but it may be worth waiting for a slight discount to bring it into “Buy it now” territory.