Rogue Wizards is a new turn-based isometric rogue-like dungeon crawler for PC and mobile. It has a good name, which is more than can be said for some of its characters.

In Rogue Wizards’ story mode, you take the role of a ‘Banlit’: traditionally working citizens who are unable to use magic. You find a magic scroll that teleports you to a dungeon in an unknown part of the land of Rilfanor, where a friendly fighter named Pallom is waiting for you.

Progressing through the dungeon with Pallam at your side, as well as a friendly creature who joins you, you eventually find the exit portal and find yourself in the magical town of Antarit. There Merrol, an innkeeper and wizard, as well as an ‘Elam’ — one of the magic-using citizens — is raising an army of magic users to fight the evil Hosperak, all around bad guy wizard. She tells you that even though you are a Banlit, you can obviously use magic, or the scroll’s magic wouldn’t have worked. And she needs your help.

Hosperak has opened portals to the elemental realms, from which he is stealing magical power. He has already taken over the Guild Council, and he cares not for the disruption and destruction that his actions are having on the rest of the land.

Rogue Wizards is played from an isometric view, with dungeons (where you’ll spend most of your time in the game) made up of tiles of various types. There’s some variation in the tiles, with different elemental themes obvious in different dungeons, as well as the typical stone walls and floors. 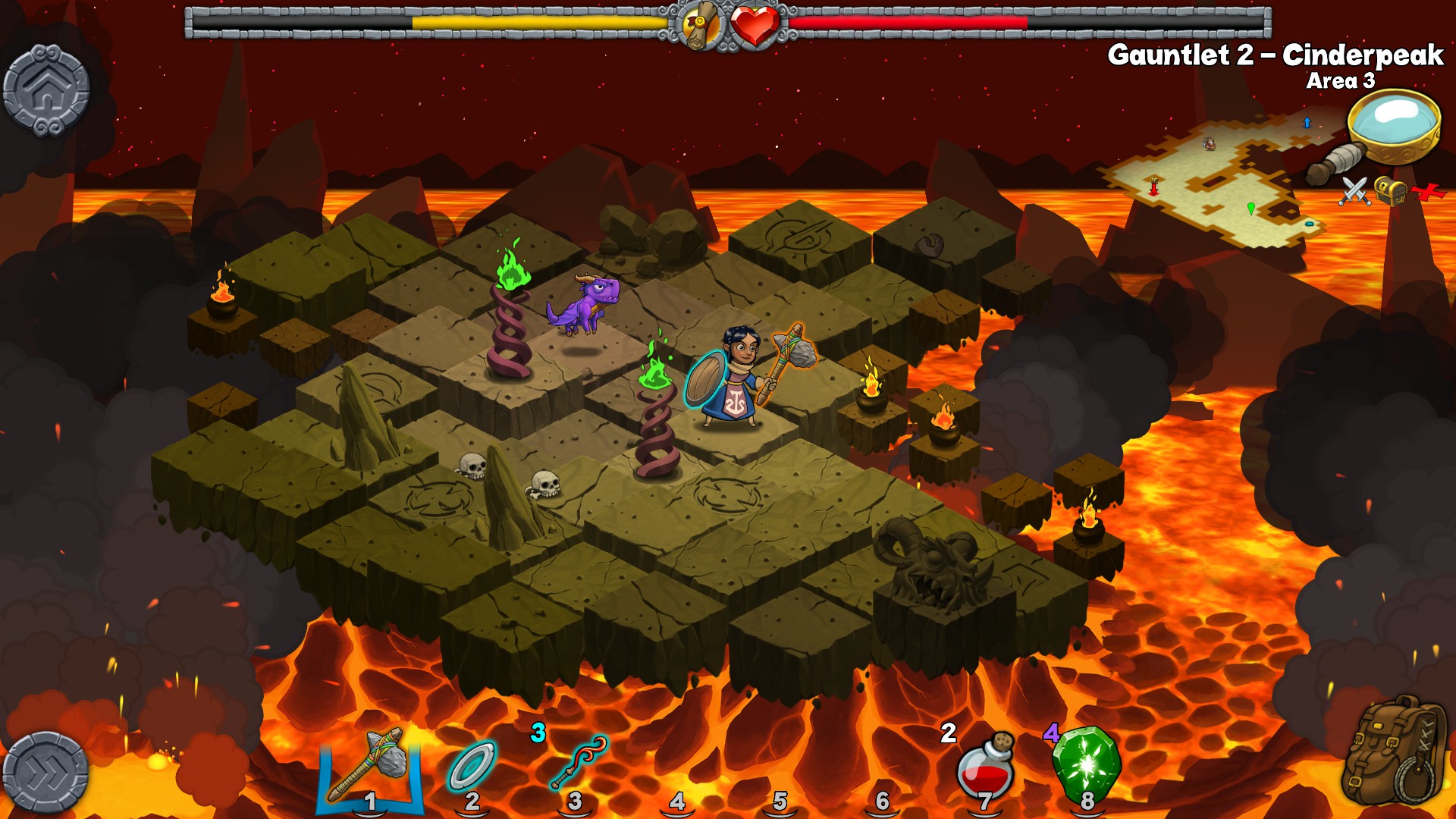 Character and creature graphics are two-dimensional: large and colourful with a cartoonish style. They look very much like a modern mobile game, but work well on PC, too. It’s unfortunate that you only have a choice of two character graphics to choose from — one male and one female — and the changes to your character as you find and equip different items are very limited; though you have multiple equipment slots, only weapon types, major armour types (cloth, leather, etc), and shield types change your character’s appearance, and even then only with major equipment type changes. 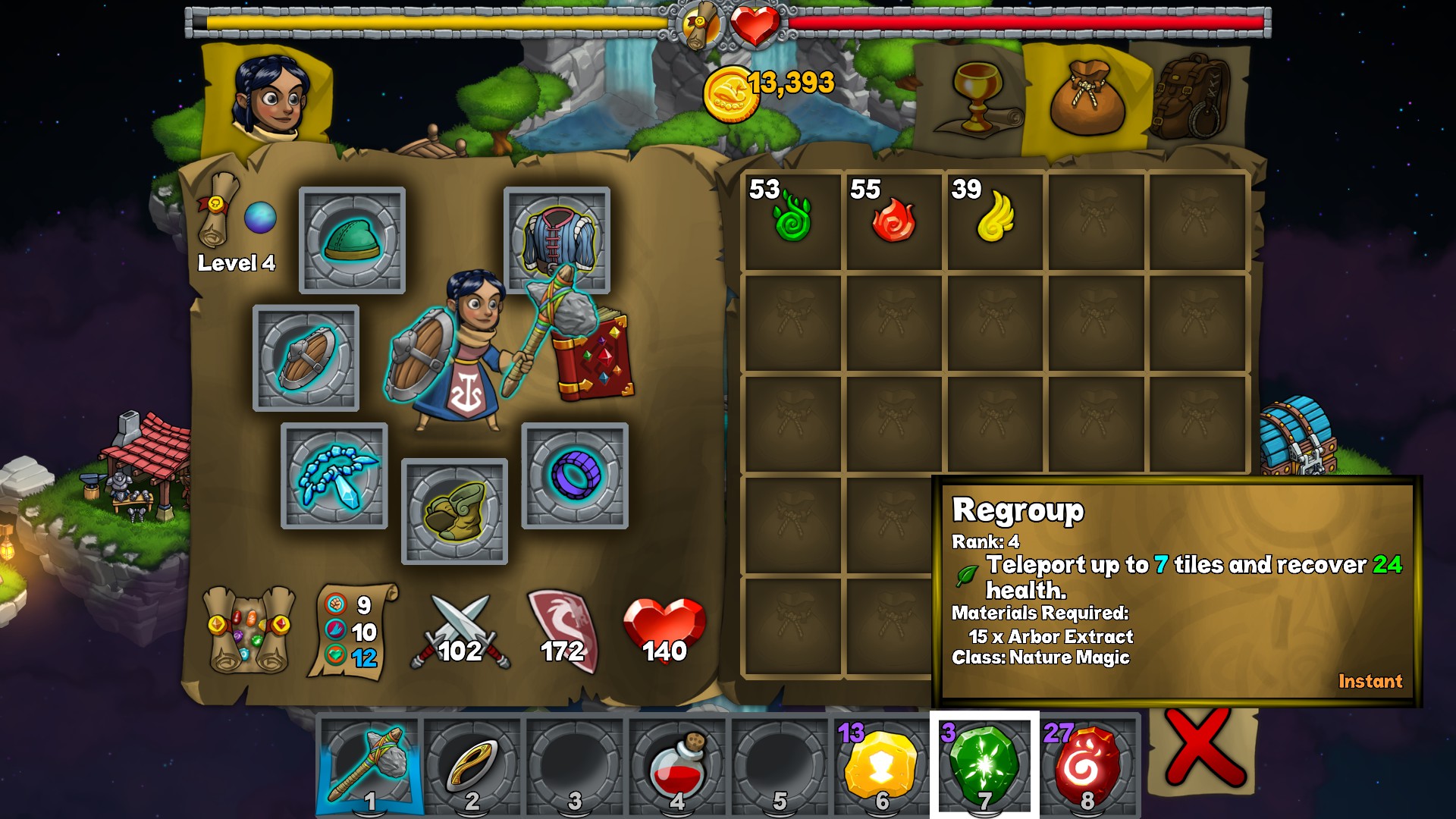 Animations are good, and there’s a good range of special attacks, spells, and other effects, that look nice. They do sometimes take a while, though, so after you’ve played through a few dungeons you may find yourself wanting to speed up the gameplay a little.

Your visibility in the dungeons is very limited: typically only five or six tiles. The game features a weird effect that I don’t think I’ve seen before, where the world just disappears into blackness at the edge of your visibility range, but when you move the tiles in front of you at the edge of visibility drop down from above to form the map, and the tiles behind you at the extent of your range fall away off the bottom of the screen. It’s sort of cool, but at the same time rather disconcerting.

Graphics options are minimal and limited to the usual resolution, full-screen / windowed toggle, and vsync. I didn’t experience any graphical performance issues, but the game is turn based and quite slow to play. The Steam overlay is a little bit broken, with Achievement and other pop ups sometimes hanging about, corrupted, in the lower right of the game screen.

Music is quite nice, and exactly what you’d expect from a fantasy dungeon crawler: mainly instrumental mediaeval-style tunes.

Sound effects are okay, but nothing out of the ordinary. It’s a mobile game and is pretty family friendly, so don’t expect screams of terror or grunts of pain. It’s the typical “swish, bash, oof” type of sounds.

Rogue Wizards is turn-based, tile-based rogue-like dungeon crawler. It has two modes of play: story mode and ‘gauntlet’ mode. Story mode gives you a rather hackneyed plot (with plenty of little grammatical errors) and a town with people to talk to and shops to visit between dungeons, while perma-death gauntlet mode does away with all of the extras and just gives you dungeon after dungeon through which you can crawl until you die, or tire of the experience. 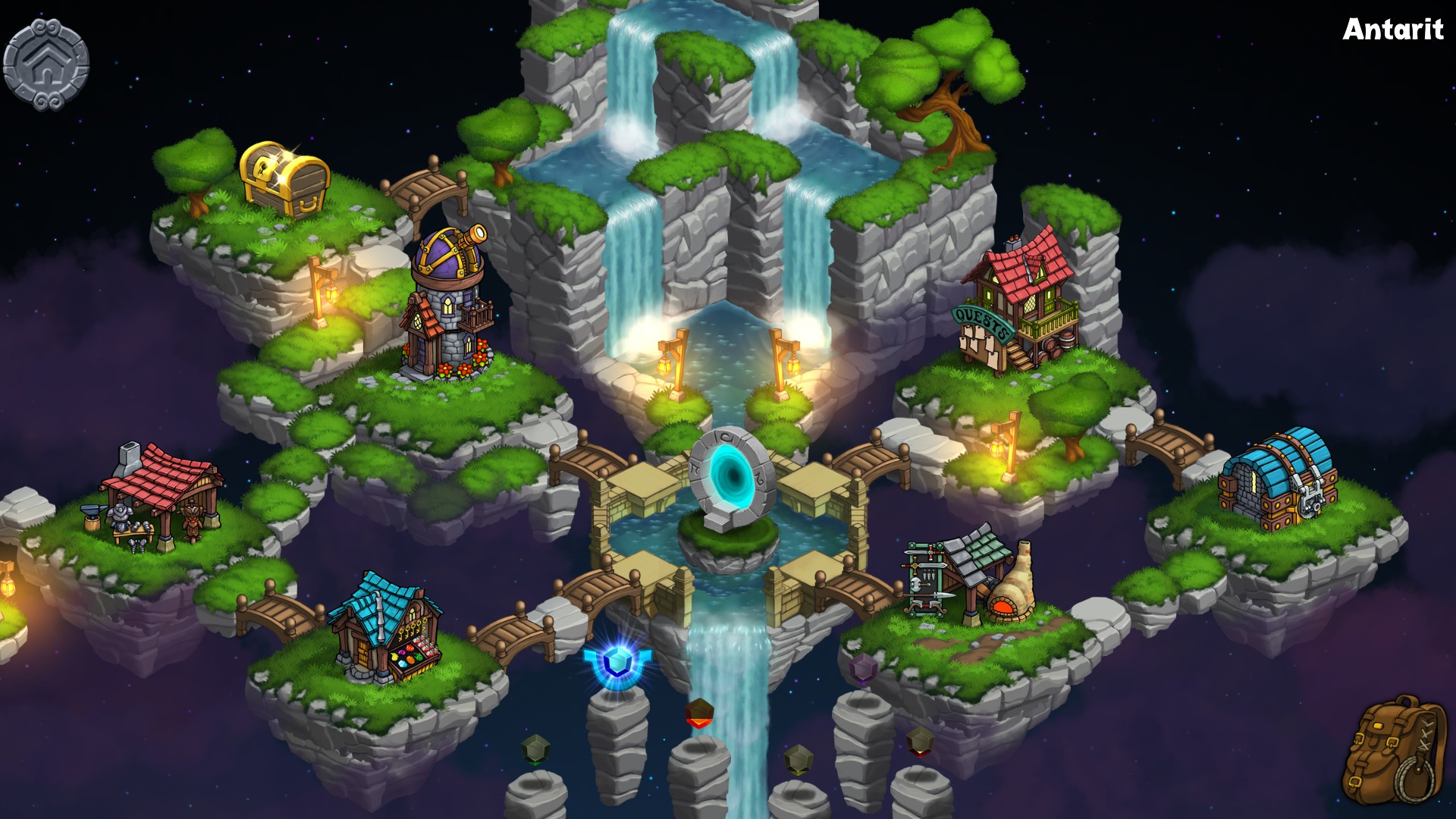 In both modes, the core gameplay is essentially the same: start at the first level of a dungeon, kill and loot everything until you find the portal or stairs down to the next level, and then do it all again. Each dungeon level also has up to three bonus goals: kill all creatures, loot all chests, and disarm all traps. Completing these gives you an experience bonus, which increases with dungeon difficulty and level. I don’t normally bother with the traps, since finding them is largely a matter of luck and it just takes too long. In story mode some dungeons also have special bosses. Killing these tends to give you better loot, as well as move the plot along. 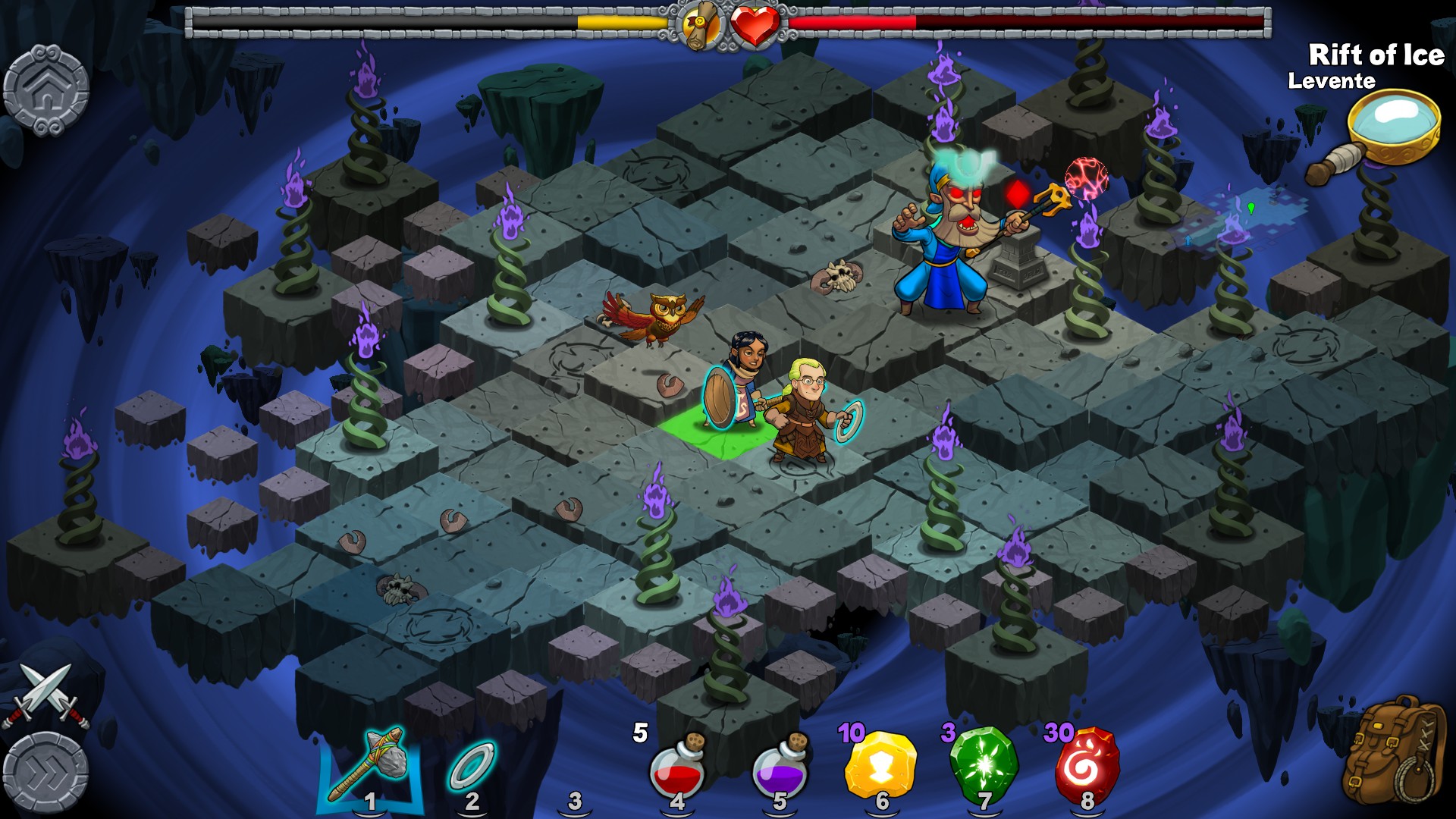 As with all good games in the genre, dungeons and loot are procedurally generated, though the variation in loot seems relatively limited, with only a small number of basic weapon and armour types, and a relatively small number of modifiers to them as well. Even so, there’s still some pleasure to be had when finding a legendary item with many good bonuses.

Items in Rogue Wizards gain ranks as you use them, which is a nice feature. You can’t tell what effect gaining a rank will have, but it’s always beneficial. I think any of the item bonuses are available as rank bonuses and they seem to be randomly assigned. They also have ‘sockets’, similar to other games in the genre. You can insert gems into these sockets to grant certain bonuses, and, as usual, you can’t remove them once added.

Spells are a staple of the genre, and they’re included here, too, though with a slightly annoying caveat. Each spell uses elemental materials that you have to collect and cart about with you, so the size of your spell repertoire tends to be inversely proportional to your available inventory space. It’s a bit of a pain and doesn’t really add anything, in my opinion, other than frustration. Progression in the game is relatively weak, limited to three characteristics that you can increase as you level up and spell points to buy new or upgraded spells. 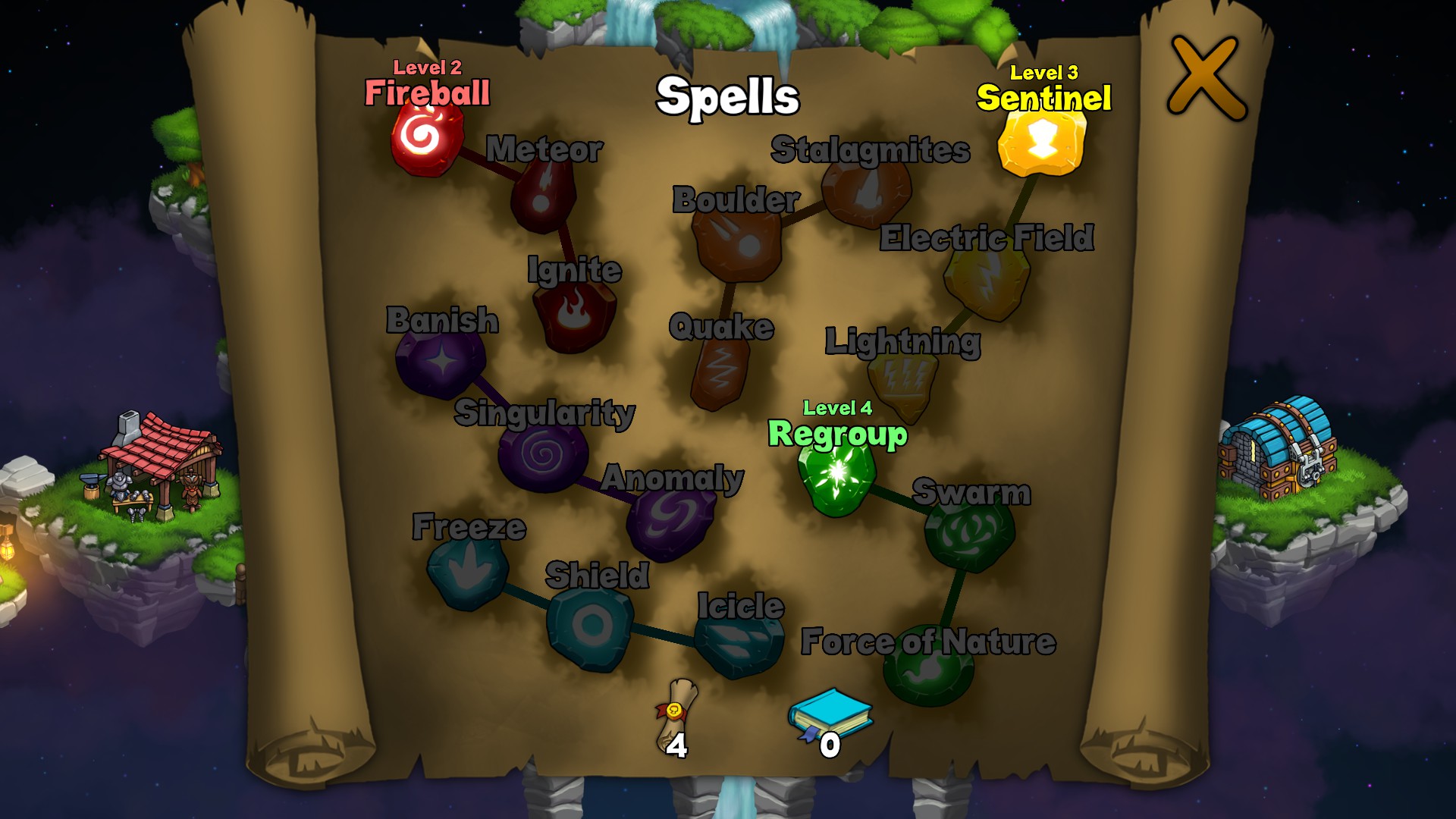 You can gain allies, both temporary and permanent, in both modes. The permanent ones are pets, which follow you about until they die. In story mode even death is not the end, and they’ll resurrect of their own accord before too long. But in gauntlet mode that’s it; you’ll have to find another friend. It’s unfortunate, then, that the AI is rather terrible; you’ll quite often lose your companion to stupidity.

There’s one design decision that makes combat much less fun than it could be for me, too: changing weapons, spells, or pretty much anything else, costs you a turn. Since you can only see a handful of tiles in any direction, each dungeon invariably turns into a battle of attrition, at least until you get an item that heals you with time, and then you just wander about aimlessly until you’re healed. Creatures that knock you back make it even worse, especially when coupled with ranged enemies.

I’m a huge fan of rogue-like dungeon crawlers, but I’m a bit disappointed with Rogue Wizards. I’d like it so much more if the developers hadn’t chosen to limit visibility so drastically and then penalise you for swapping weapons or wanting to use your spells.

If you’re a fan of the genre and like the style then by all means take a look. It’s not a bad game; it’s just not a fantastic one either.